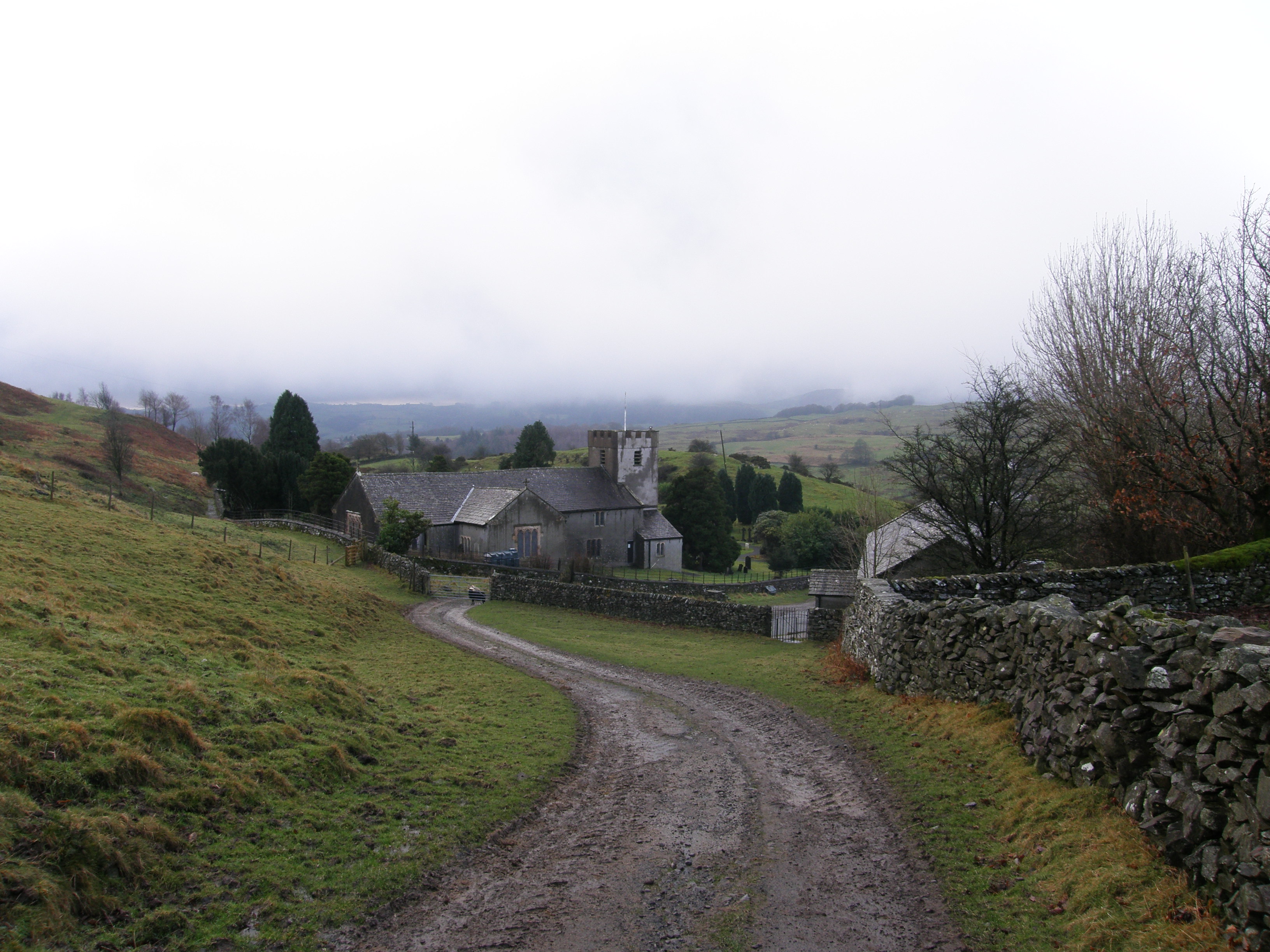 So, here we are, racing into 2014, and it’s February already. In my quest to catch up with my blogging, I’m assisted by the fact that, well – I haven’t been out all that much. Both boys have joined local football teams. Different ones. S trains on a Saturday morning. B plays on a Sunday morning. Naturally, I am the designated driver. I’ve stood on a lot of draughty touchlines this winter, which is all good, but it has hampered my walking a little. And those draughty touchlines bring me to the second reason  that opportunities have been restricted – the weather.

These days I’m a pretty fair weather hiker, but we all get stir-crazy now and again, and when a football free day presented itself, I packed off to the Lakes despite a rotten forecast. 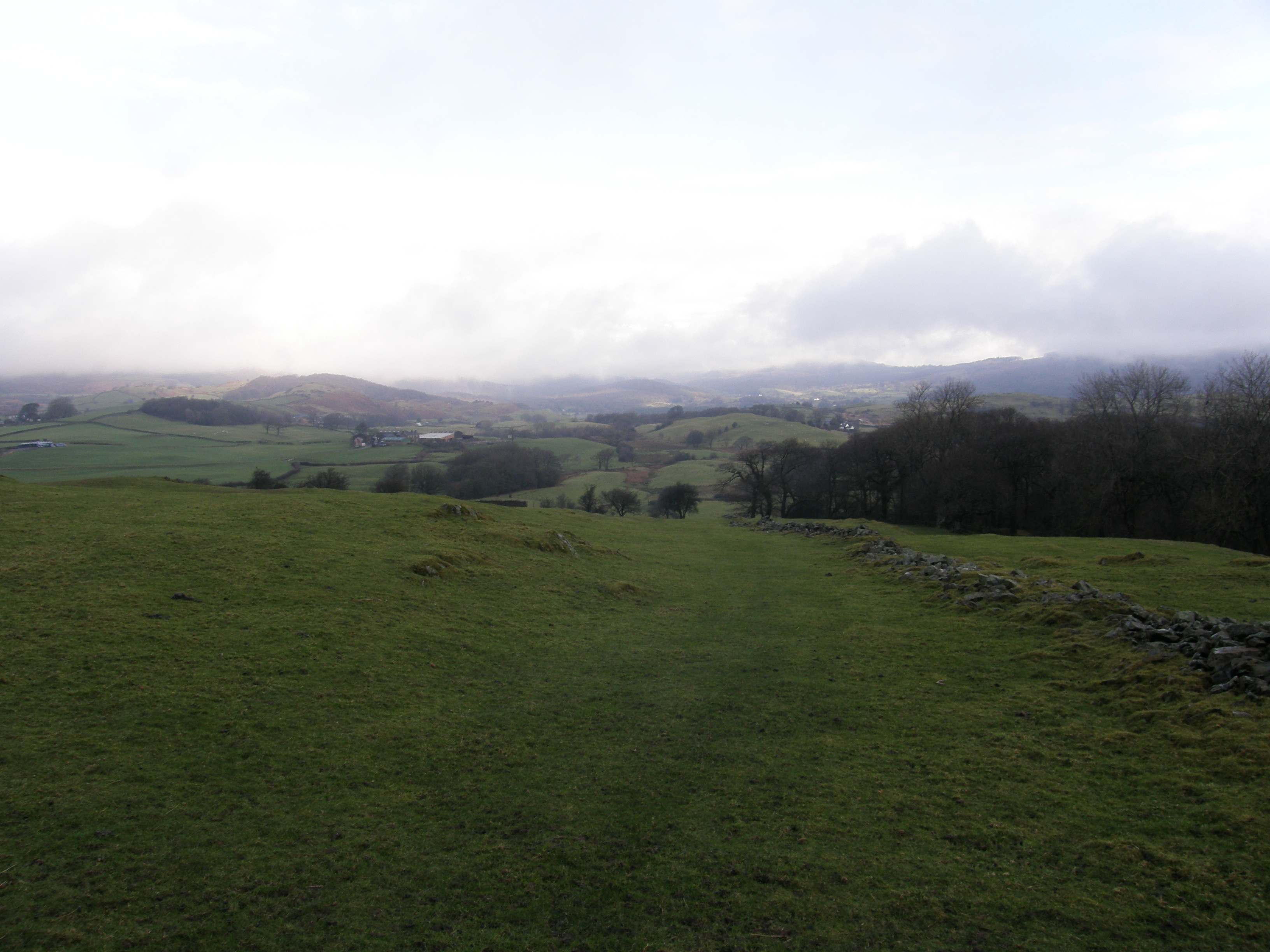 I don’t see much point climbing up big hills to get rained on in the clouds, so this trip took me to one of those less frequented corners of the National Park. I had a Quixotic desire to revisit Rusland Moss. I parked outside the substantial church, seen above, by the hamlet of Colton. As I walked around Moss Wood and down the edge of Black Knotts Plantation, the drizzle turned to more earnest, purposeful rain. 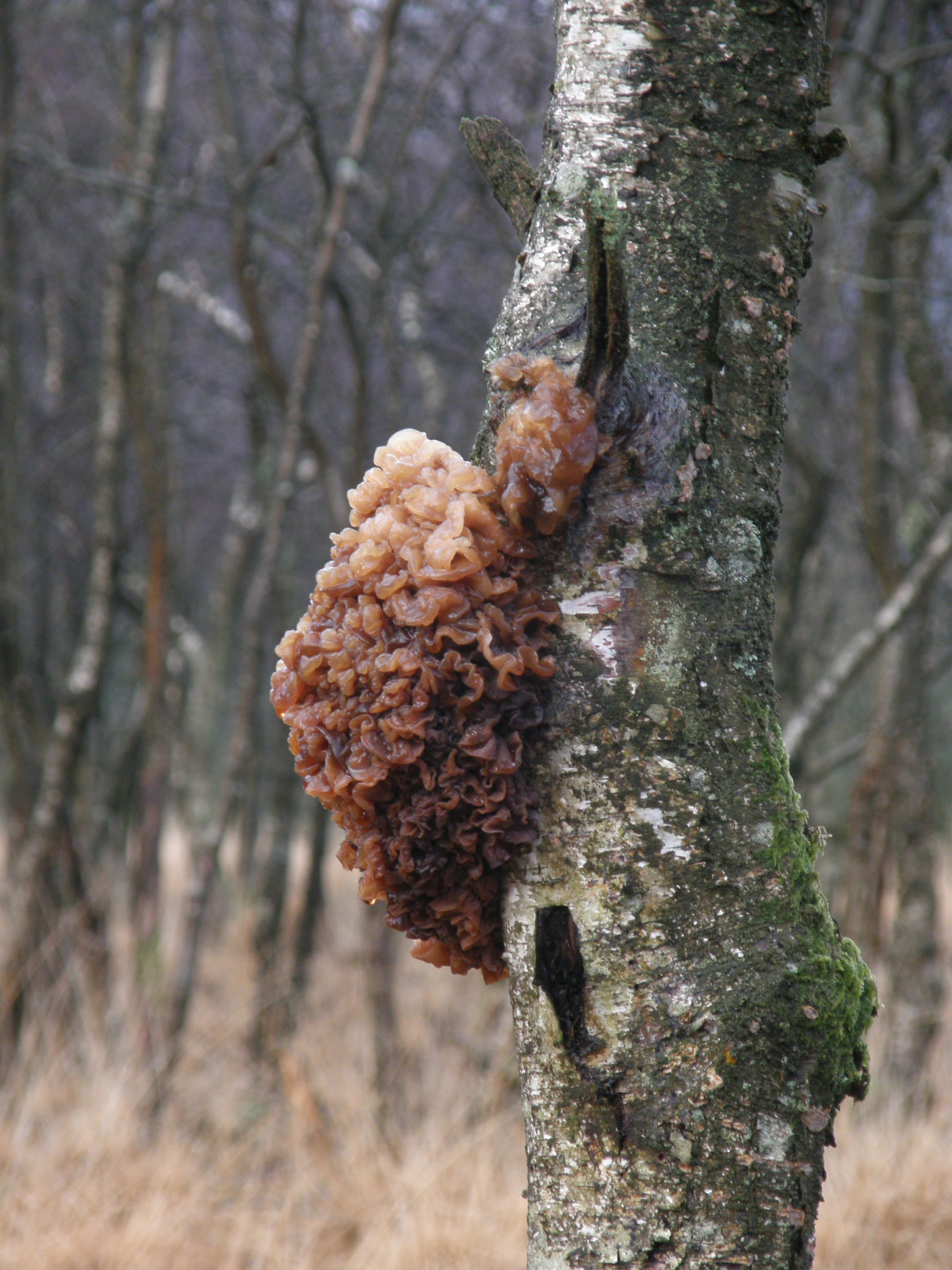 The Nature Reserve at Hay Bridge, and Hulleter and Rusland Mosses are really well worth a visit, I’m surprised that they aren’t better known. But today I half-expected, after all the weather we’d been having, to find them submerged. 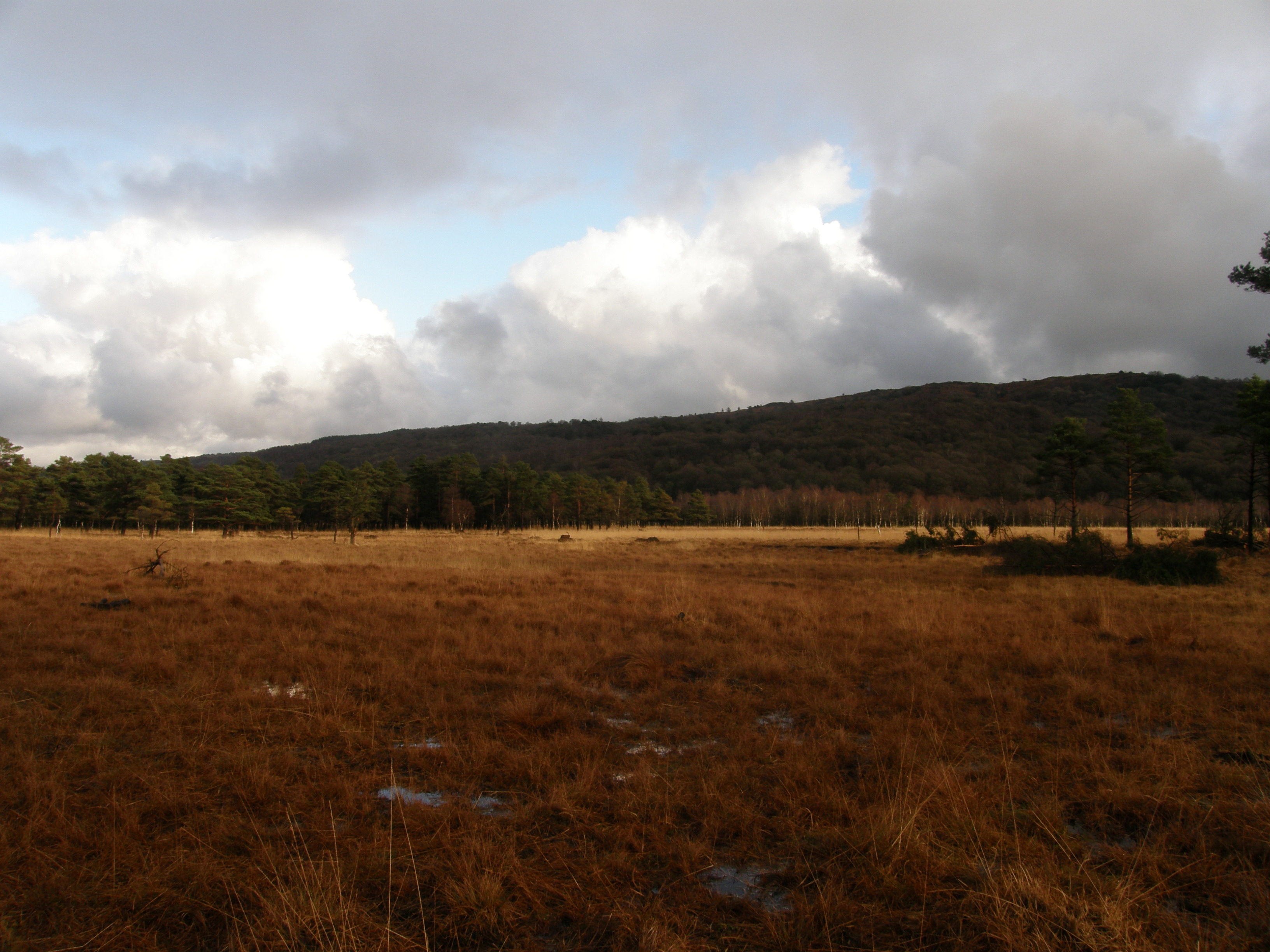 To my surprise, I got right across both mosses with only slightly soggy feet. 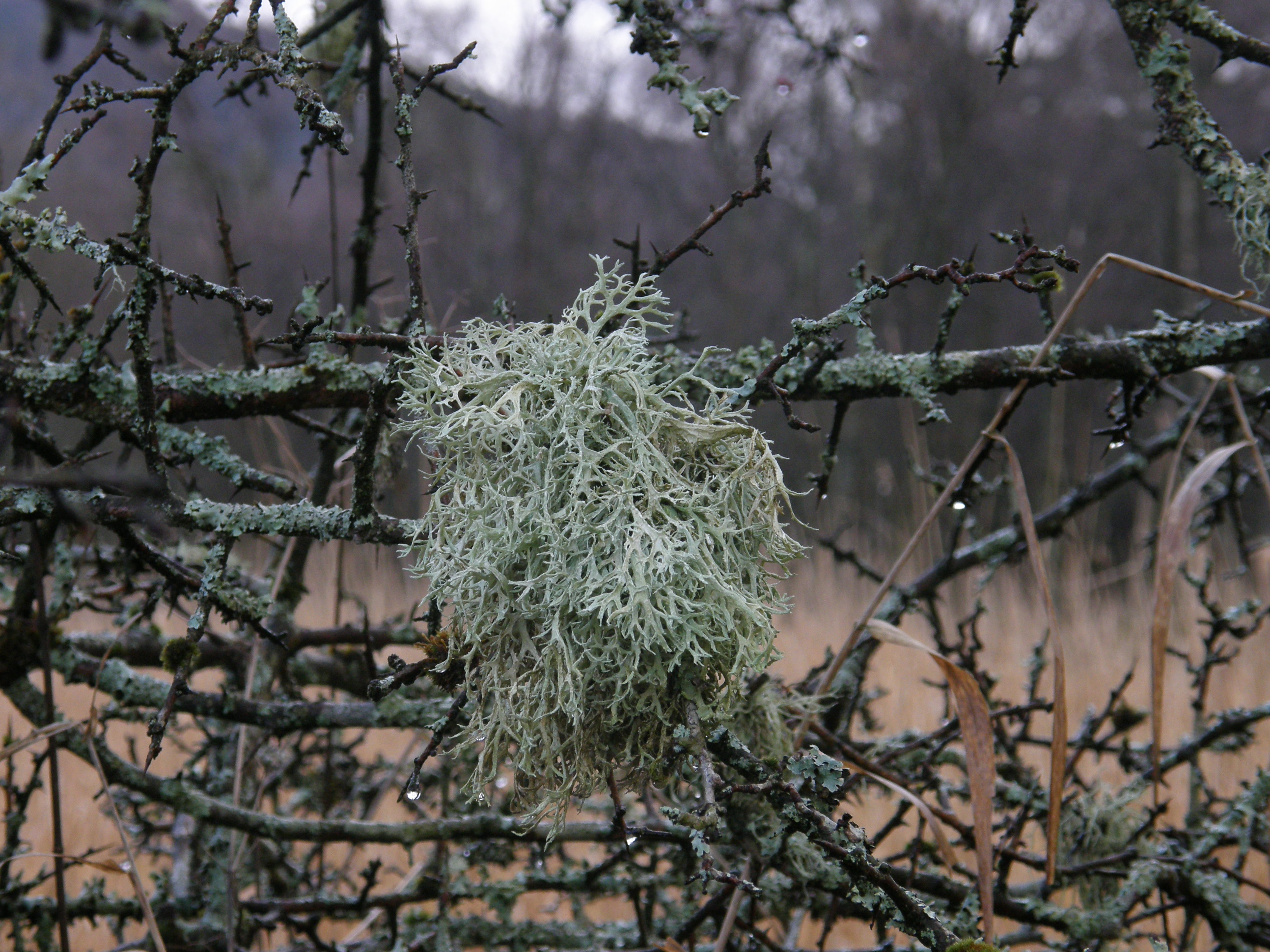 But when I reached the far-side of Rusland Moss I found…. 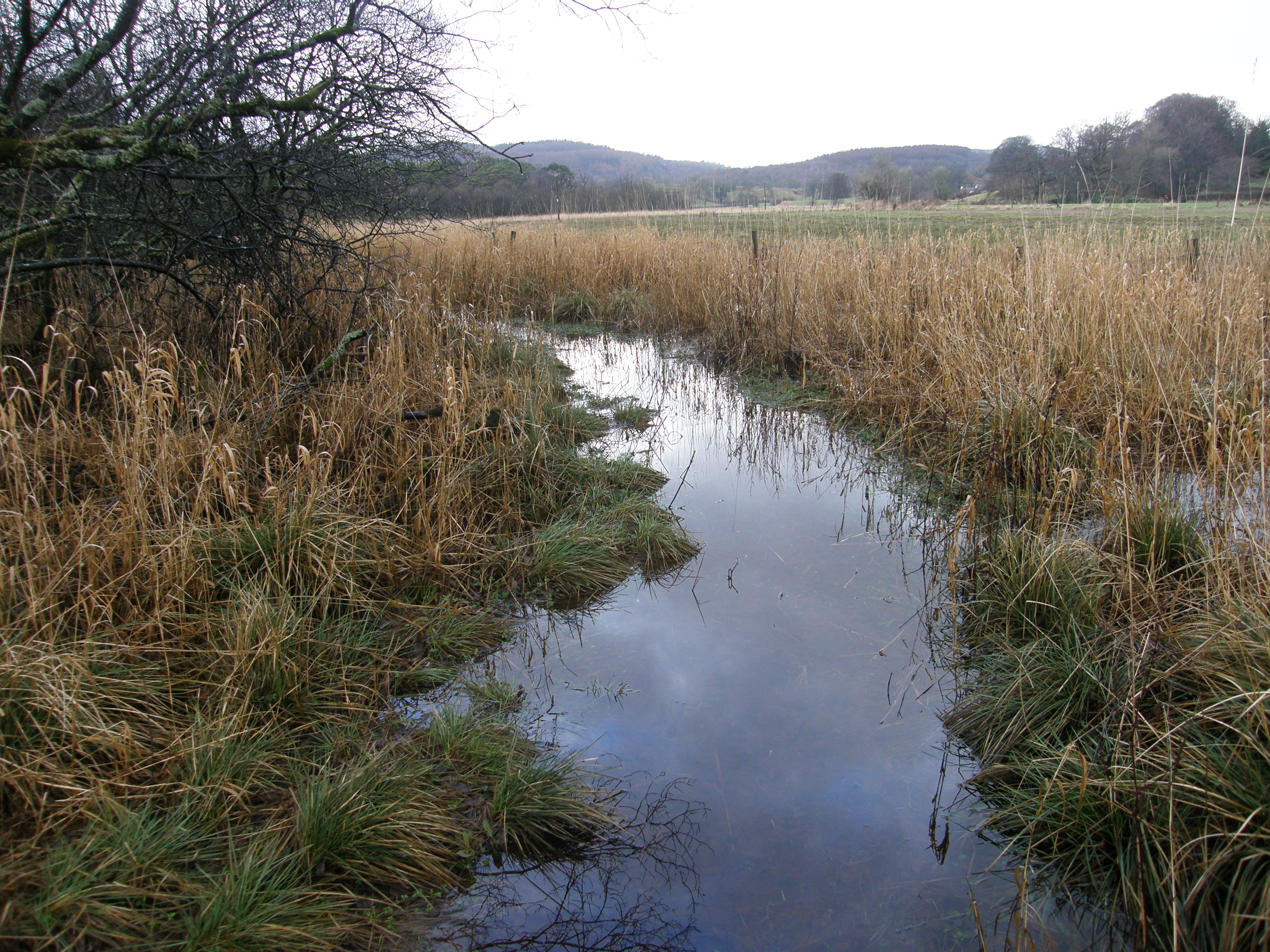 A path which I didn’t fancy swimming along. I backtracked to Low Hay Bridge and took the path (my O.S. map doesn’t show it as a path – I thought I was making a sneaky trespass) to Hulleter. 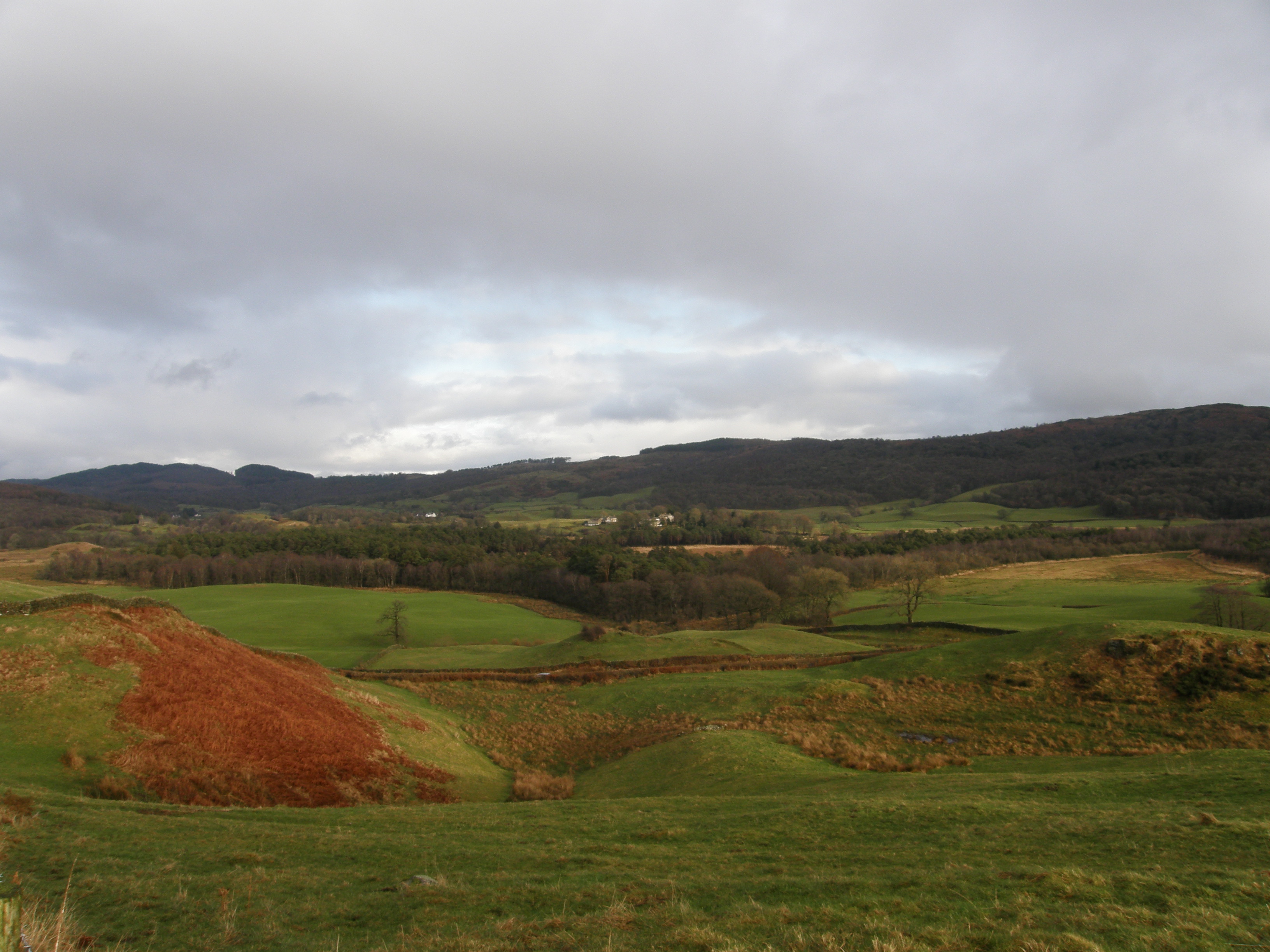 On the path to Kirkthwaite Cottage I encountered a ‘ford’, or to put it another way: another flooded path and this time I decided to bite the bullet and wade through it. Dry feet are over-rated however. Probably.

Whilst I was circumnavigating a little knoll called Lone Riggs, the sun even made an appearance. 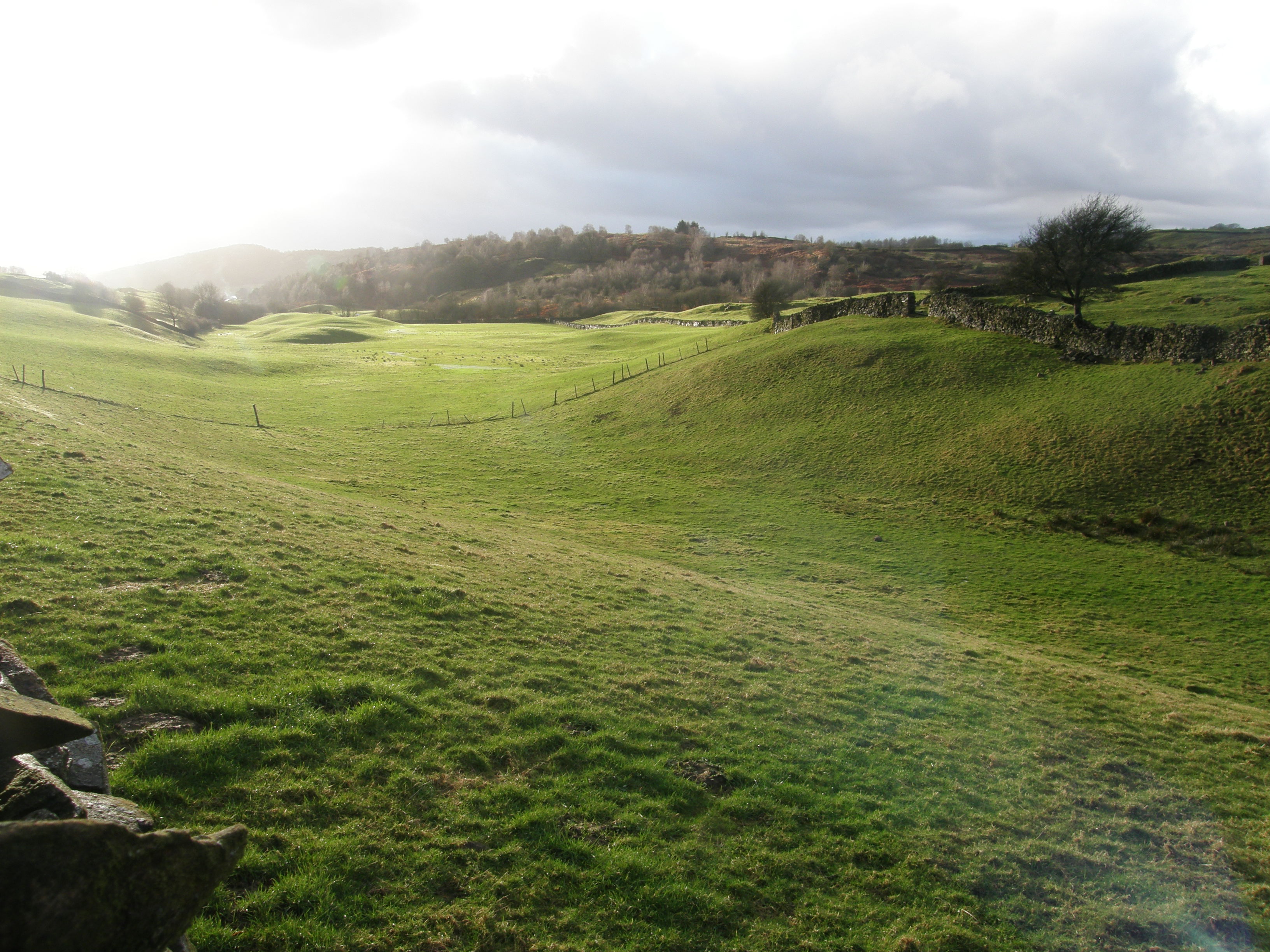 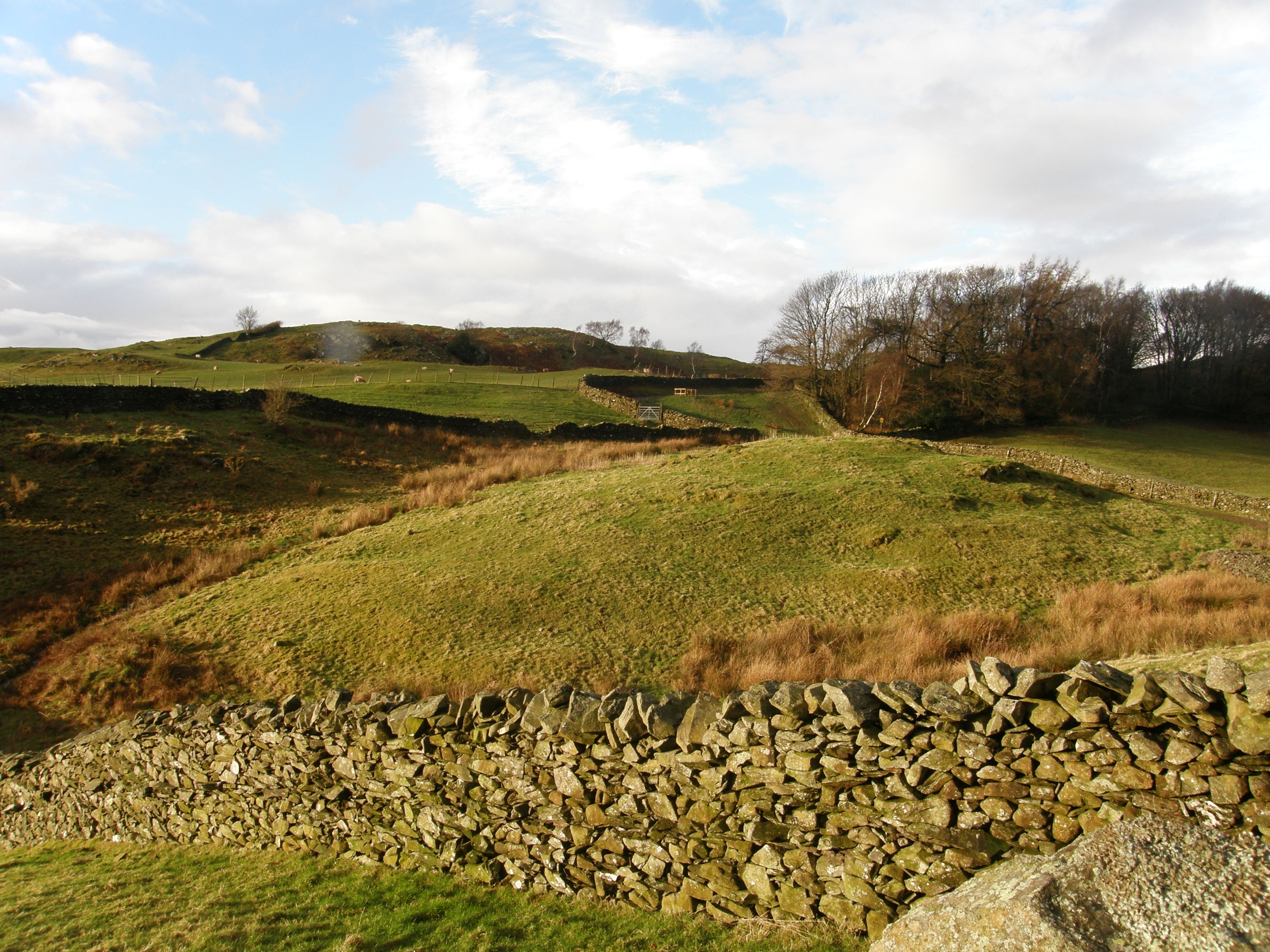 When I reached OxenPark, the sky was a filthy black again and soon after it was raining again. 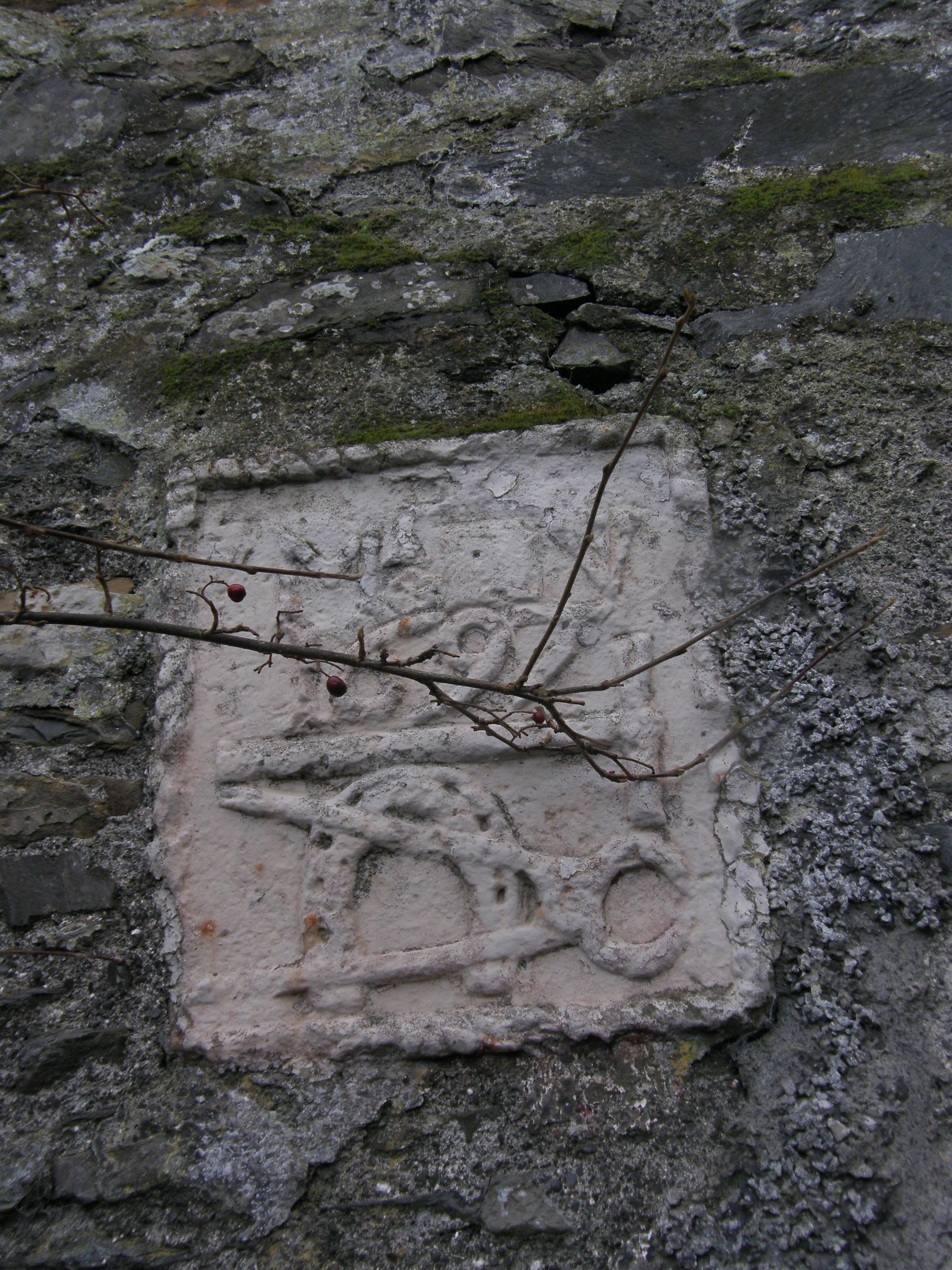 Spotted on a wall in Oxen Park – something to do with a blacksmith’s?

Here’s a map. I drew on the route (in black) using a malfunctioning mouse, which is why it meanders a bit at times, not because I was drunk in charge of a satnav.

Crossing the last couple of fields back to Colton I even had a little more sunshine – it was one of those sort of days. The sort of day when the last stile of the day turns out to be a kissing gate constructed of two huge, tall slabs of stone, much too close together for one of my great girth to squeeze between and still open the gate, requiring some deft acrobatics to be surmounted. The sort of day when you take off your soaking wet trews for the drive home and then find yourself on a gated road having to get out and faff about opening and closing gates in your undergarments!

5 thoughts on “Colton and Rusland Moss”