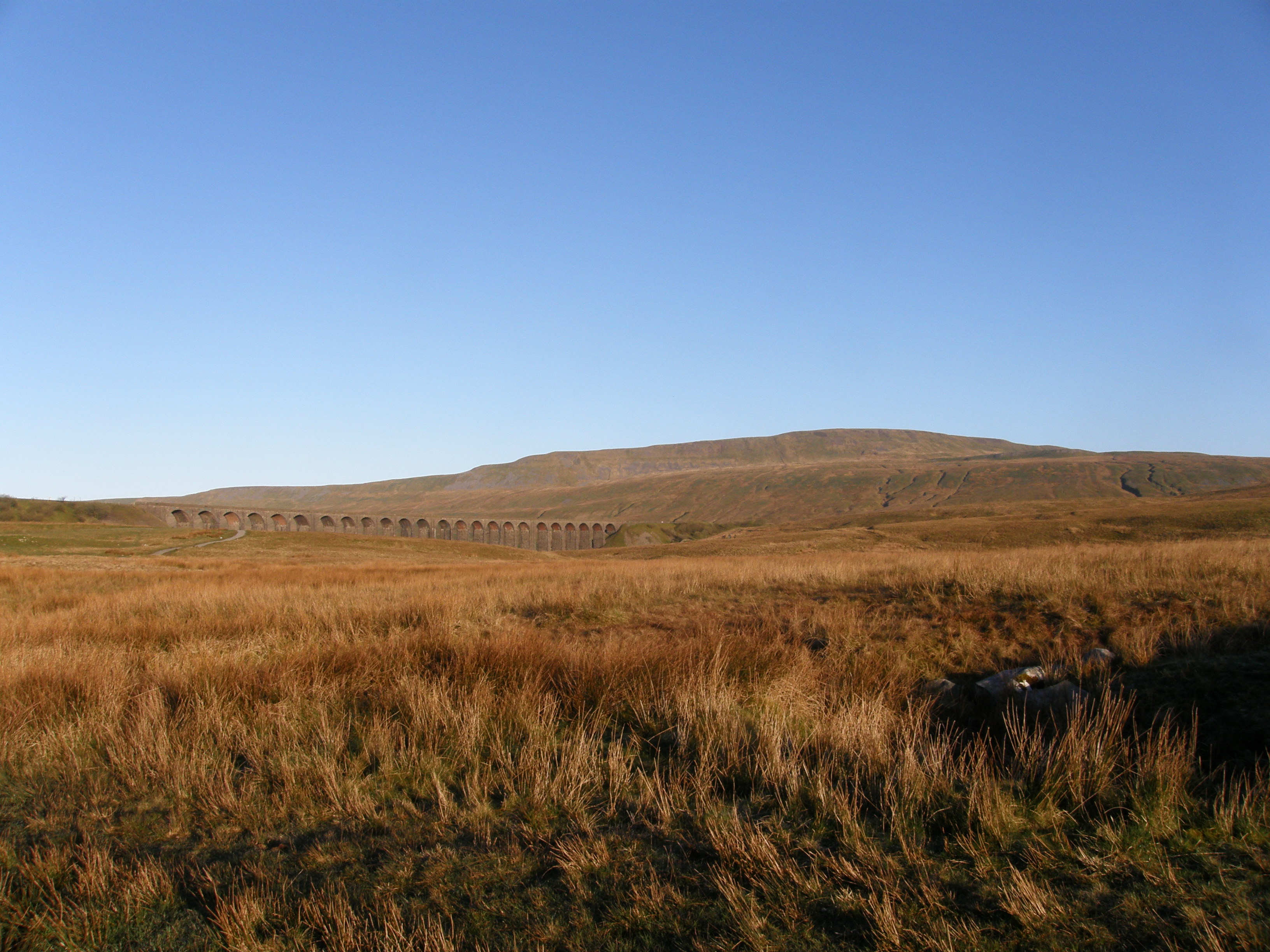 A solo outing. And one of my early morning starts – if I remember rightly, I parked up at Ribblehead at around 7.30am. It was, as you can see, clear and bright: very sunny, but also bitterly cold.

As I walked alongside the viaduct, I was distracted by a pair of wheatears, who posed for numerous photos – which turned out to be a bit of a feature of the day. 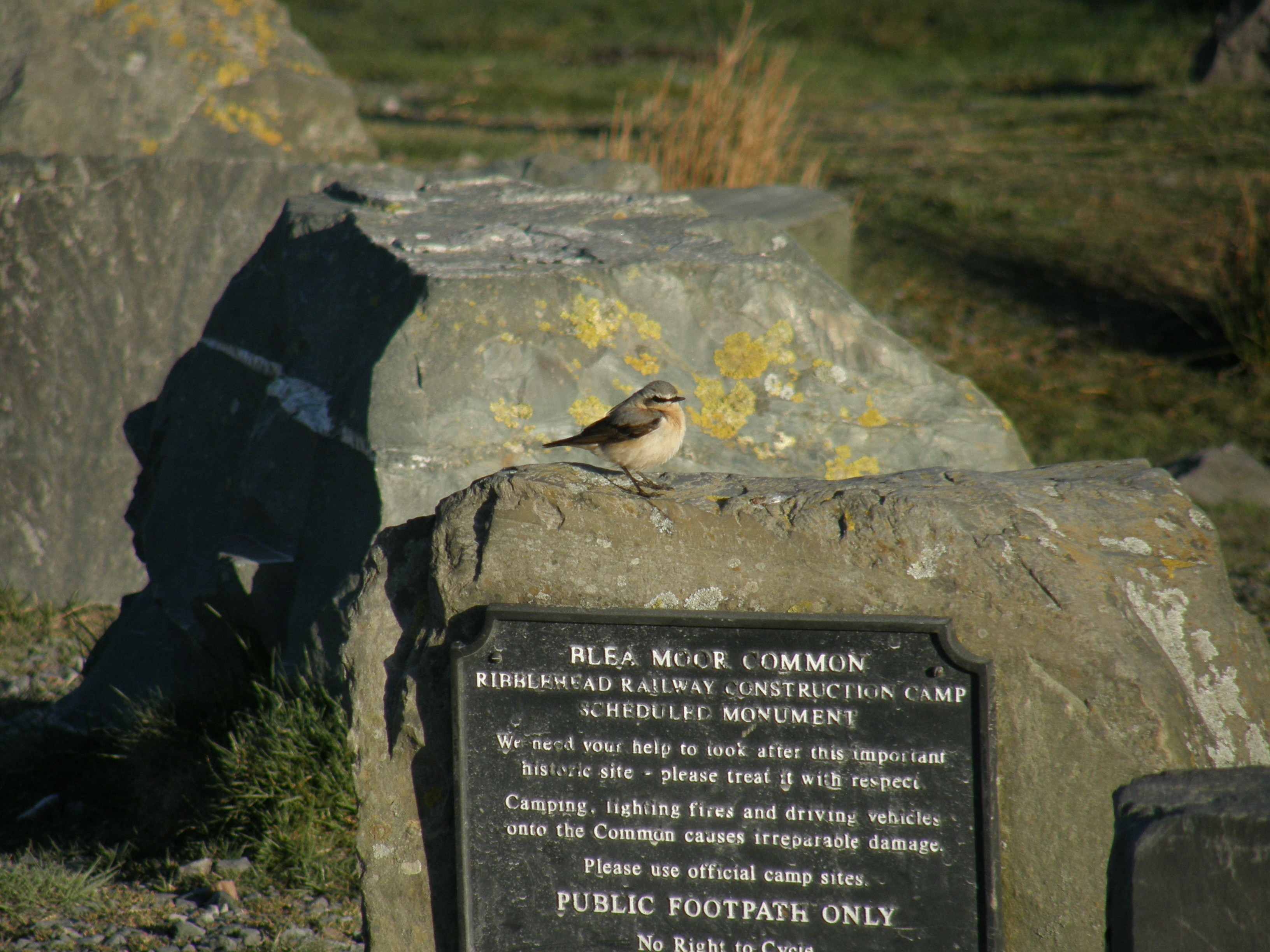 Then the early train crawled past… 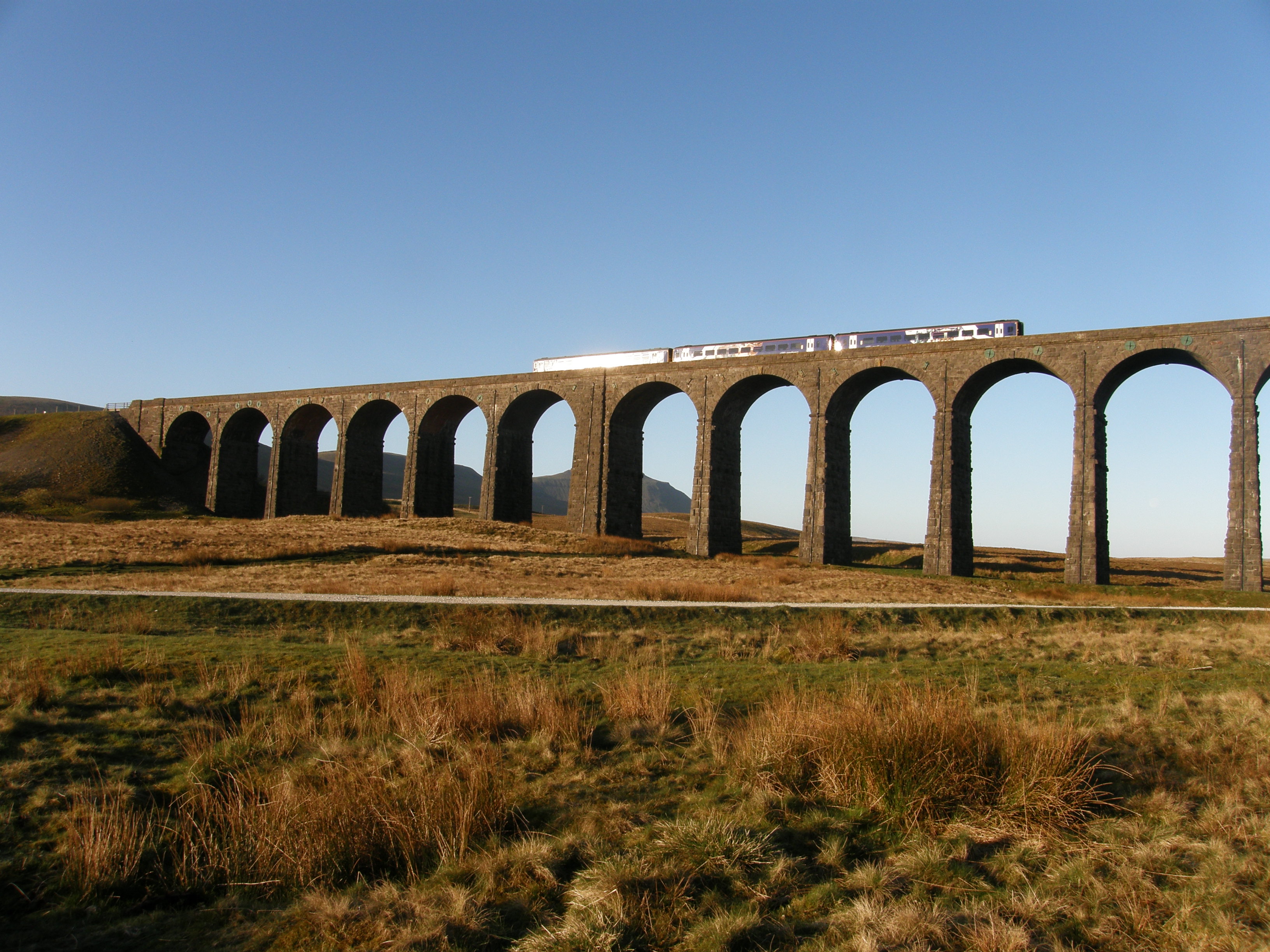 I followed the railway line North towards Dent, stopping briefly to admire a tiny wren which was singing with great gusto from a sapling on the embankment. 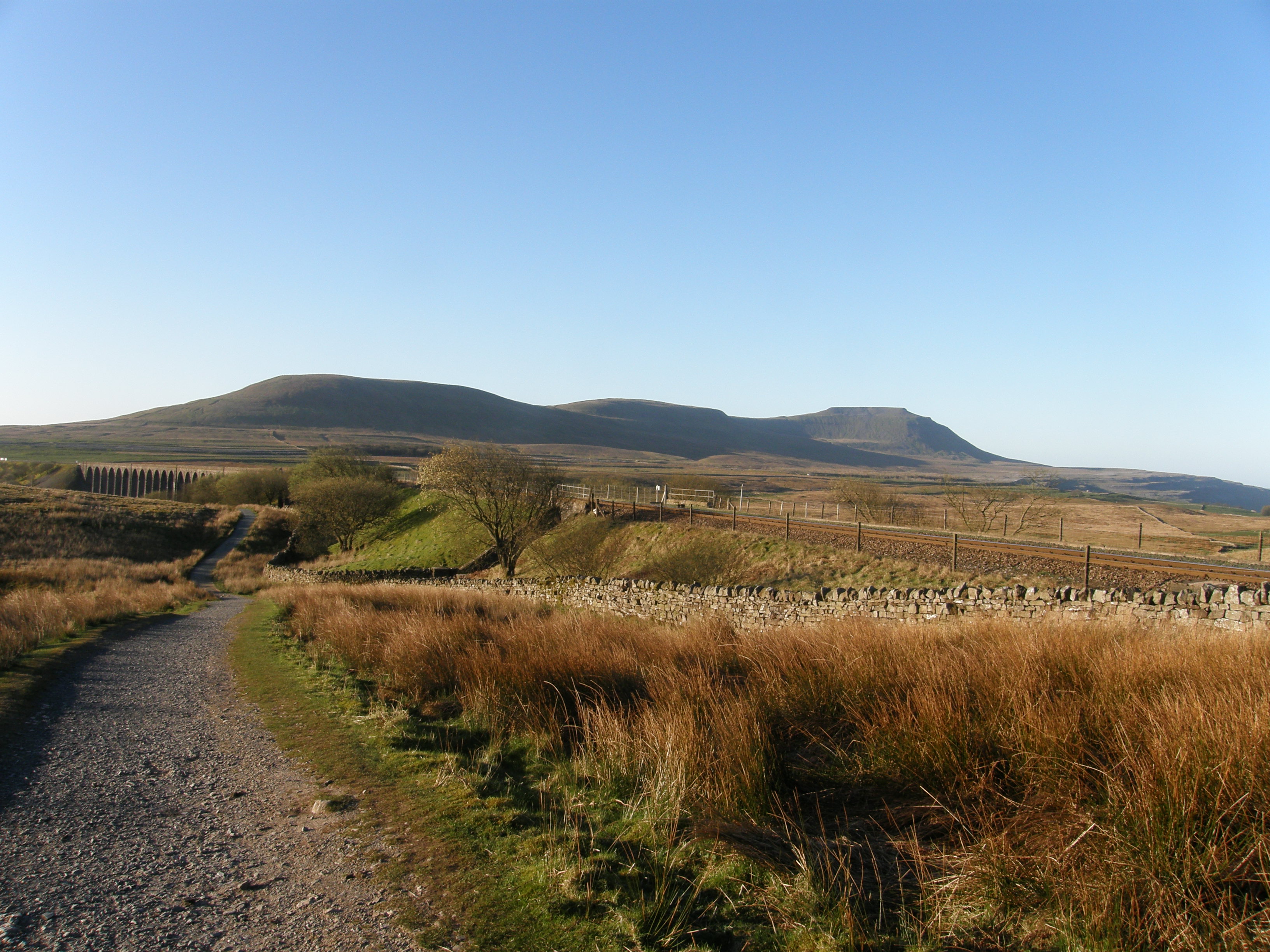 Handily, Force Gill crosses the railway line via an aqueduct and the path slips across the same way. 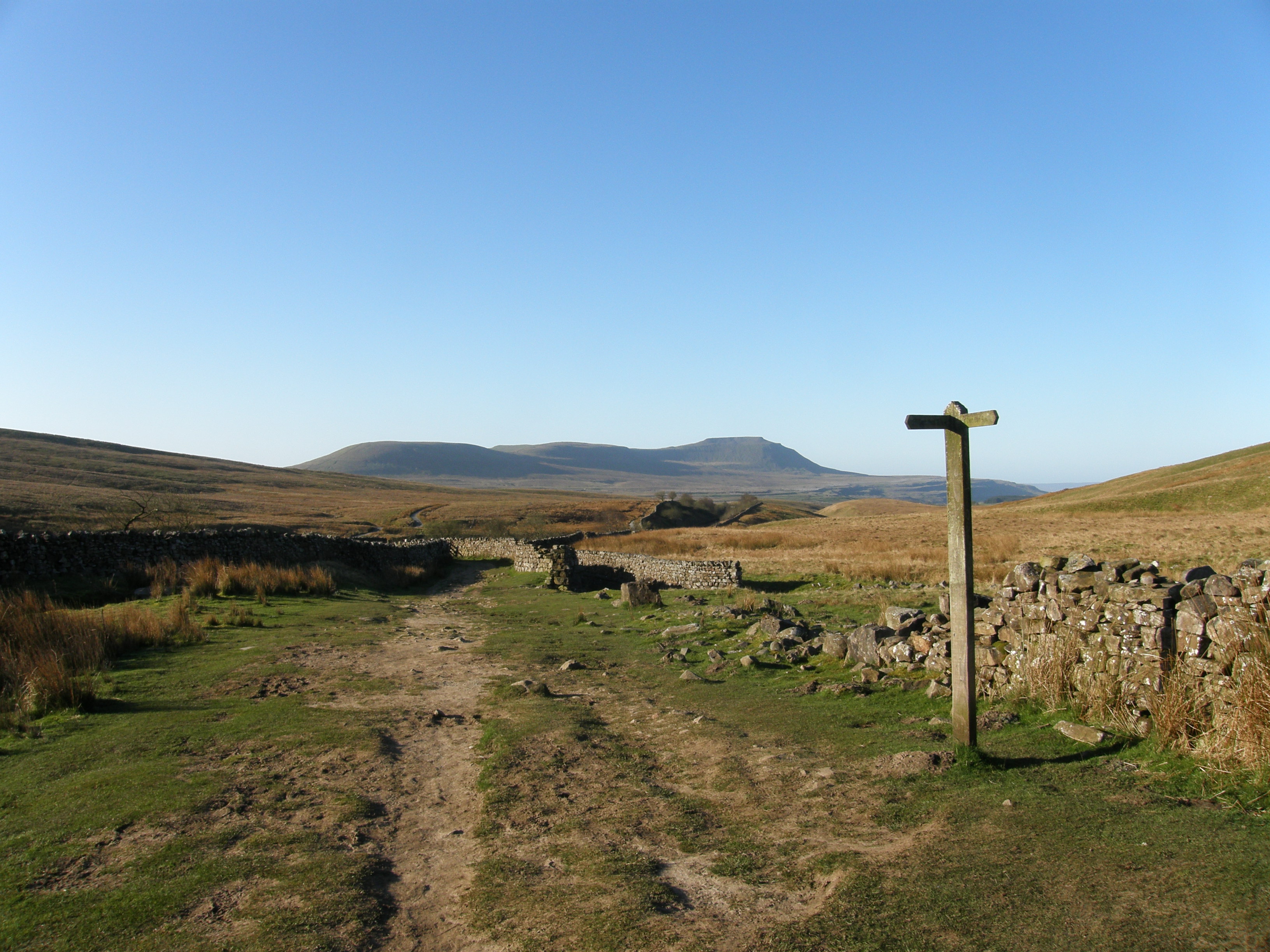 The path then climbs Force Gill Ridge towards Knoutberry Hill and ultimately Whernside. I left the path however, to follow Wainwright’s suggestion of an ascent beside Force Gill itself. The immediate reward for such a choice is an encounter with ‘the lower fall’…. 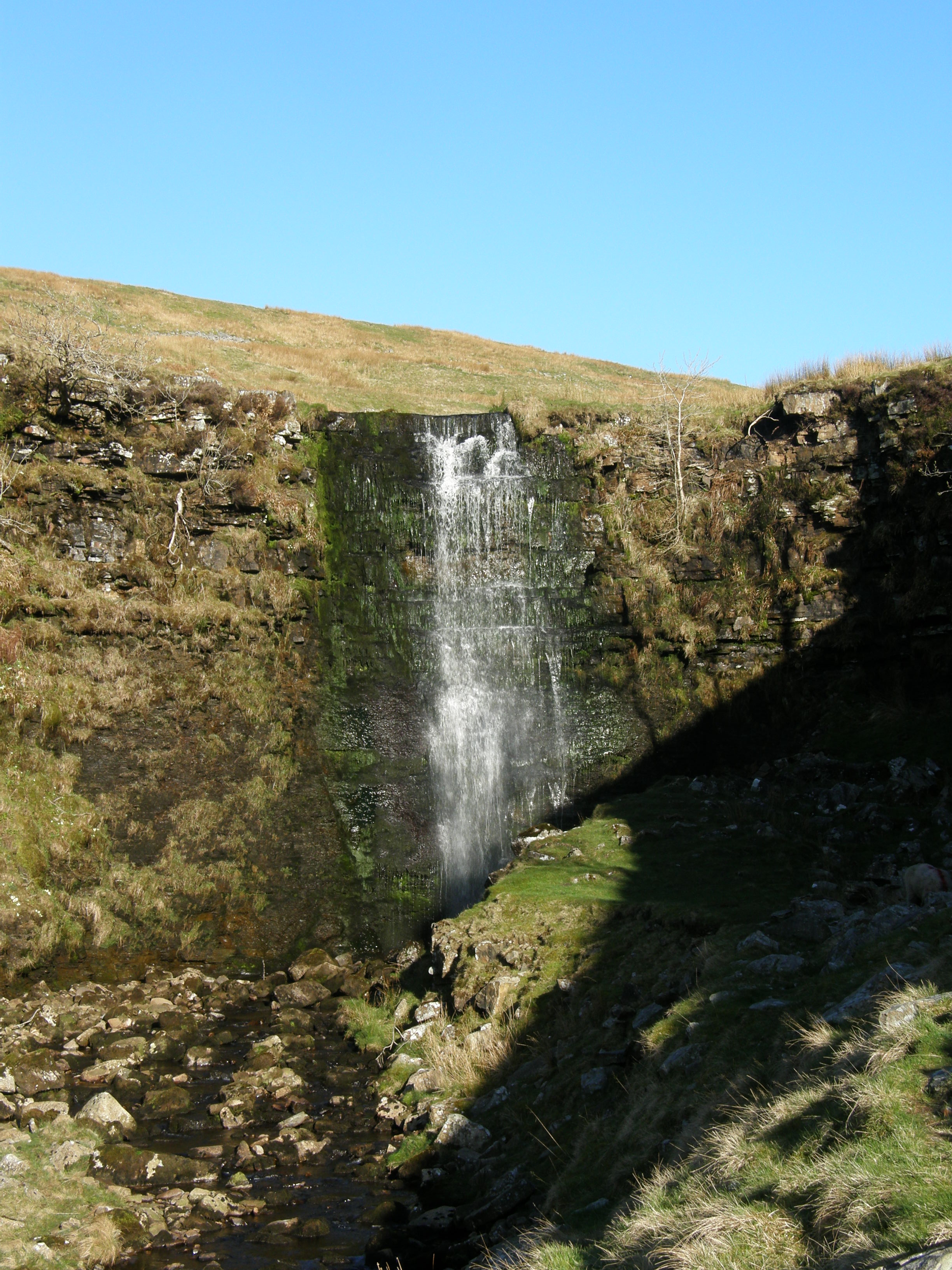 ..which is very impressive. I’ve climbed Whernside many times over the years, why don’t I remember seeing this before? I watched a dipper which seemed to disappear into a spot near the top of the falls. This was the first of several dippers I saw, or perhaps the one dipper several times, or maybe a few dippers a few times each. Whatever: they’re birds I associate with mountain streams and I’m always pleased to see them. 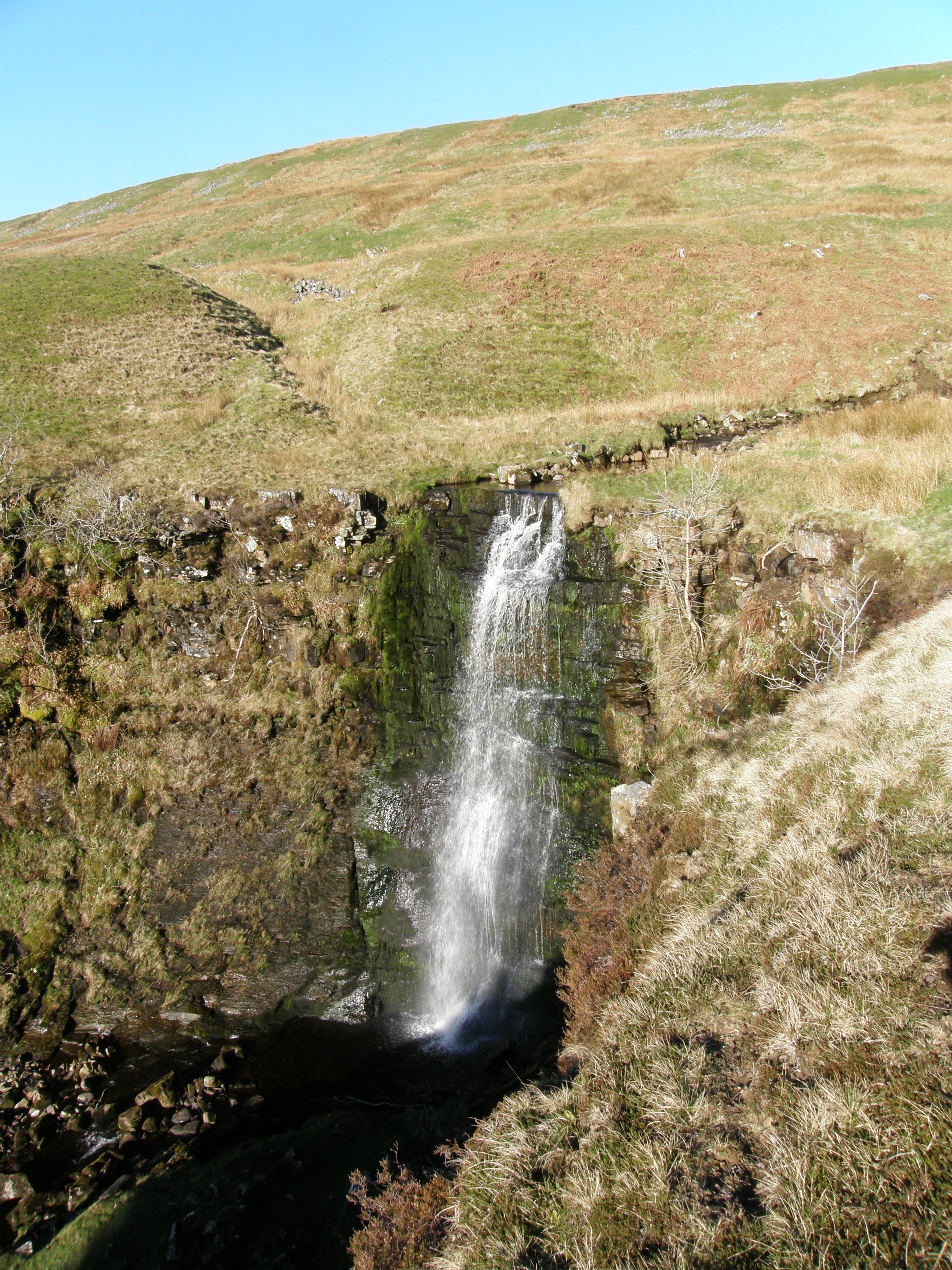 The stream was a delight to follow, with many small cascades and falls. 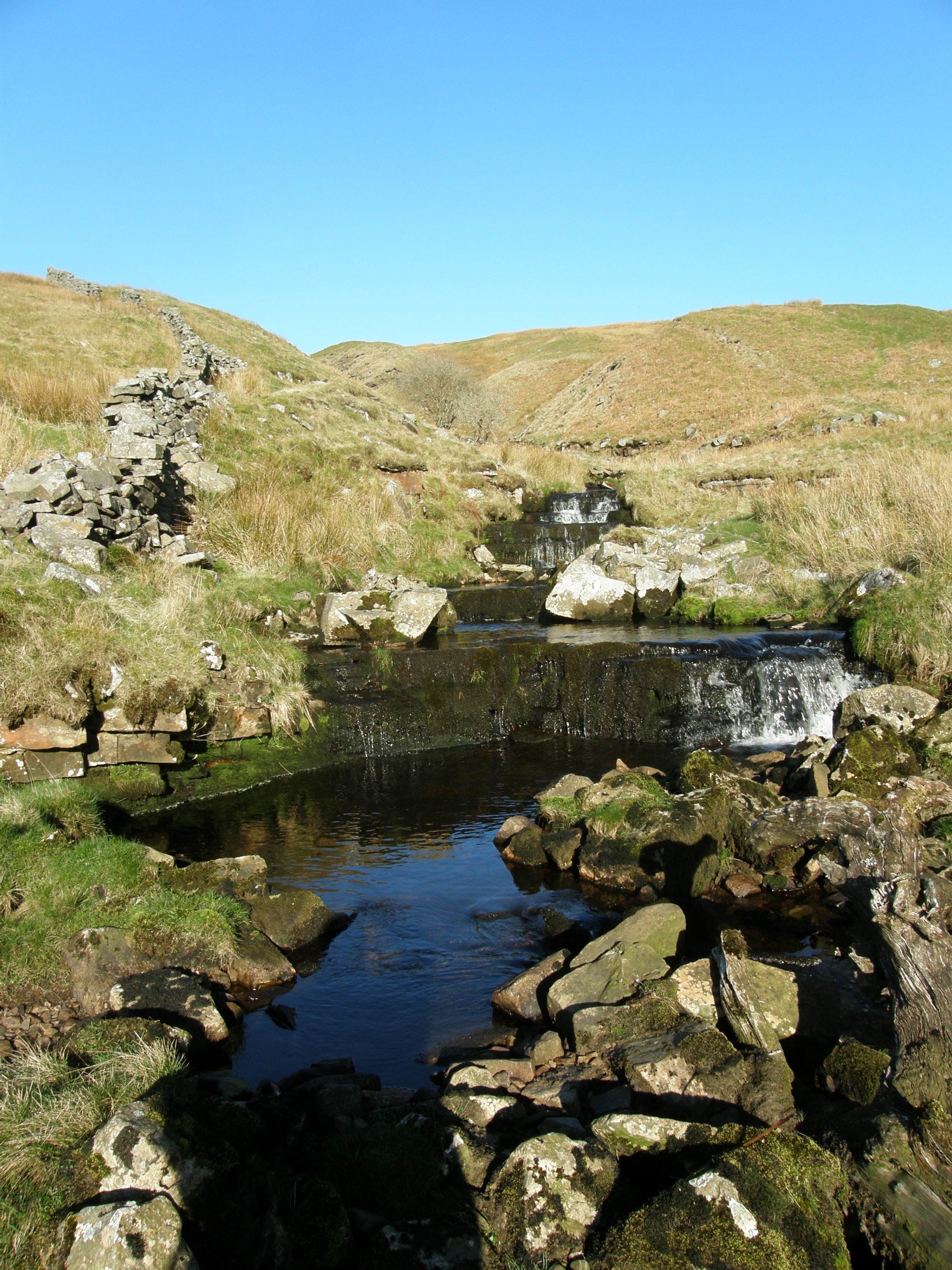 I suppose progress was slow – I took lots of pictures and, where the banks closed in a little, found myself frequently crossing the stream to find an easier passage – but then, what was the hurry? 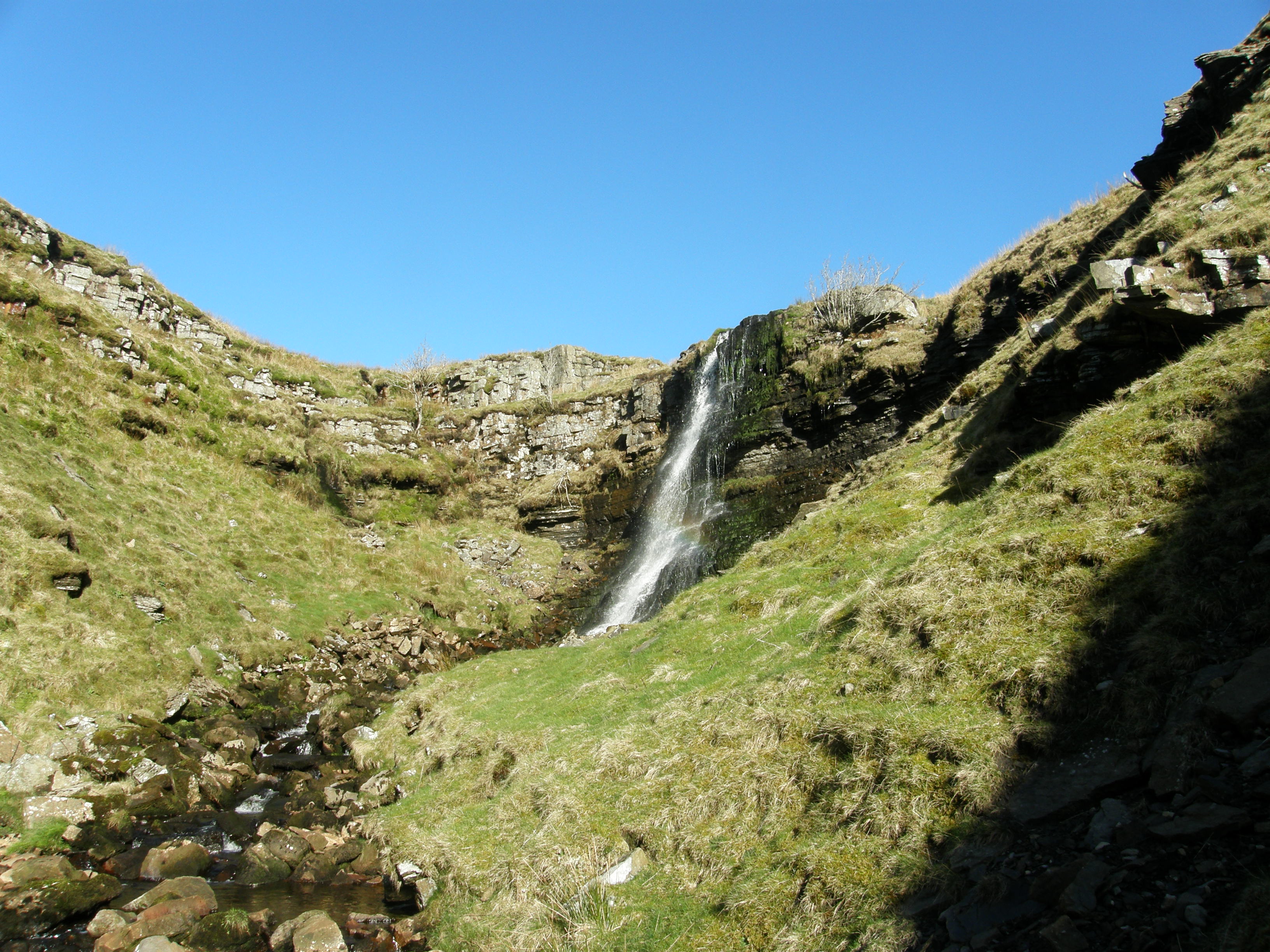 This was a superb spot and since I had it all to myself and the sun was shining I decided to stop, break out my stove and kettle and have several brews. Once again I was entertained by wheatears – three of them were chasing each other around rather vigorously. A skylark (or similar LBJ) joined them on the far bank for a while. And another dipper seemingly disappeared into the rocks by the waterfall – a nesting site? 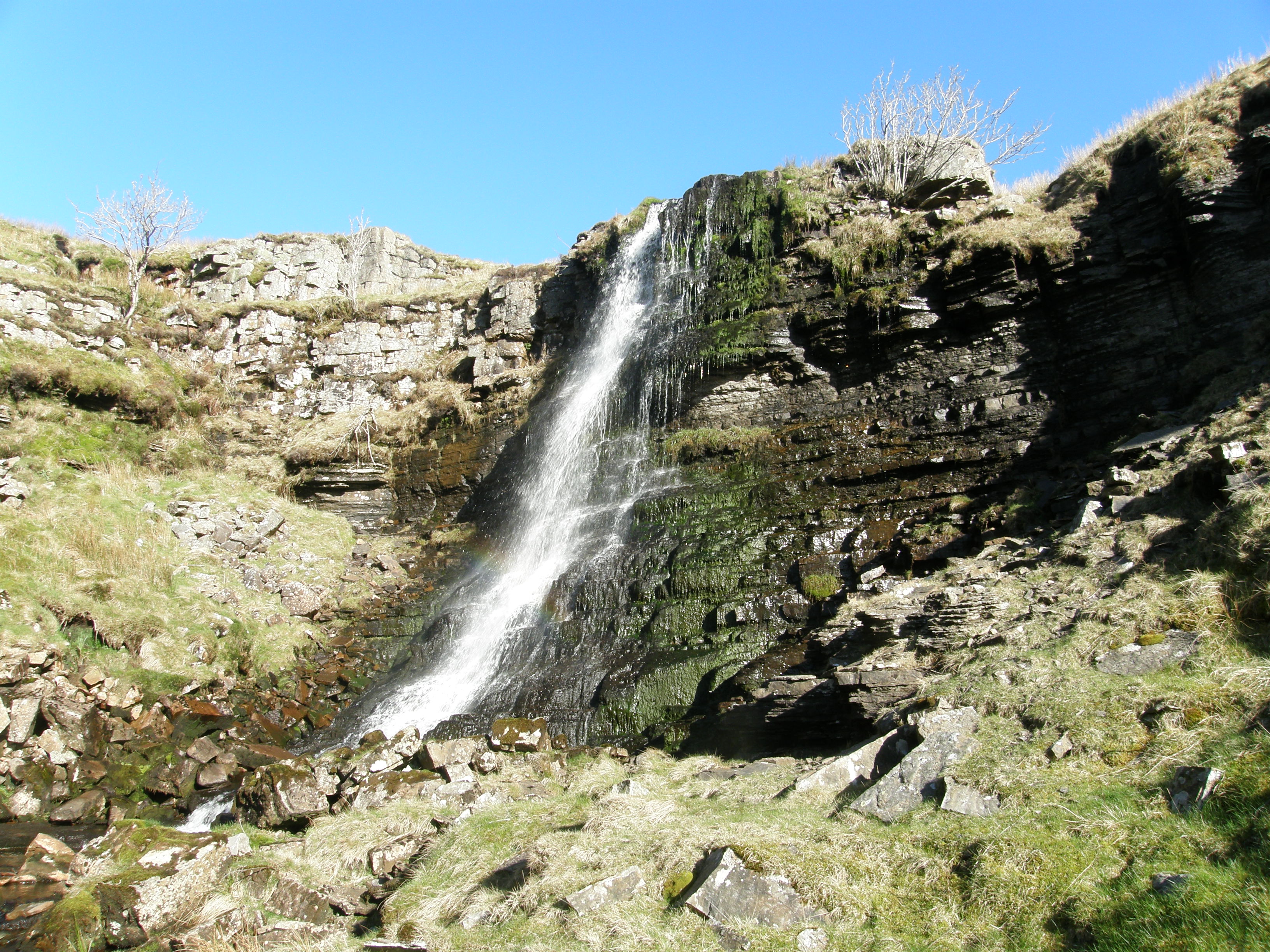 It was very pleasant sitting there, taking photos of the birds and the waterfall and the miniature rainbow in the spray near near the base of the falls. 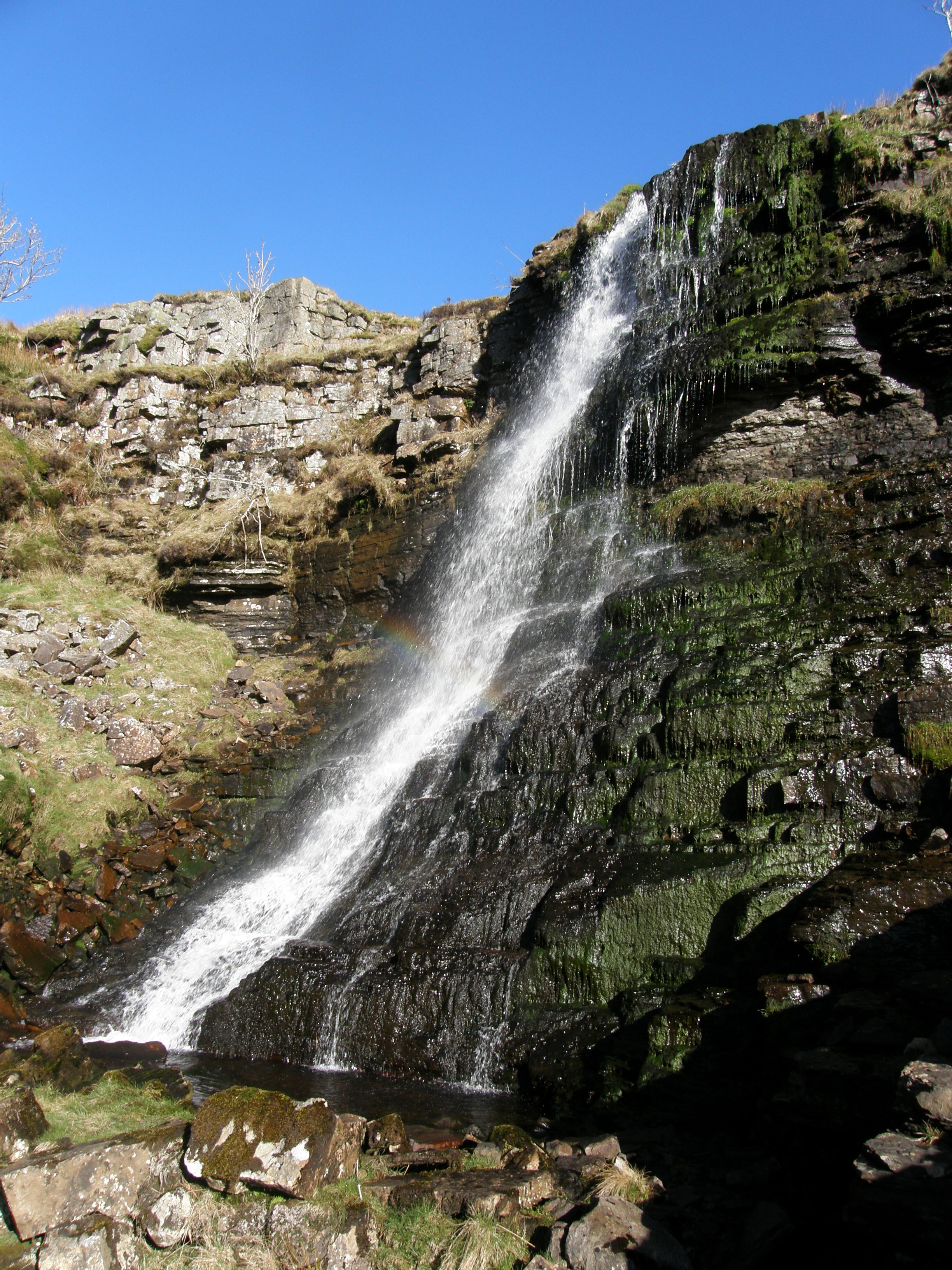 It took me quite a while to decide to move on and climb past the Mare’s Tail. 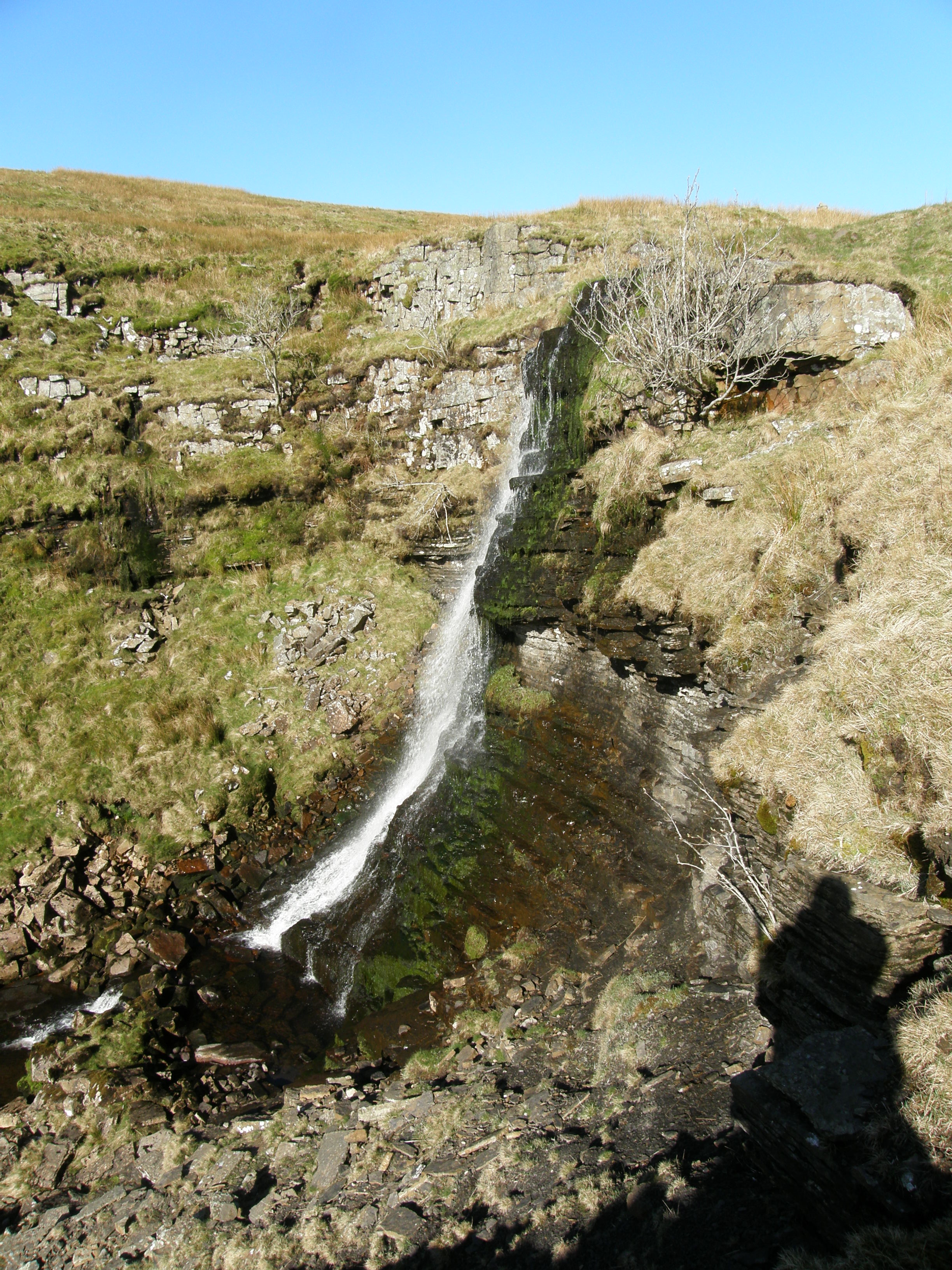 I got a bit of a shock when I did, because now I could see the main path above and to my right and see also the steady stream of bobble-hatted hikers, lead-dragged dog-walkers, Lycra-clad runners, and bike-wielding mountain bikers who were variously promenading to the top. The quiet of Force Gill had me suffering the delusion that I had the hills all to myself, but nothing could have been further from the truth. 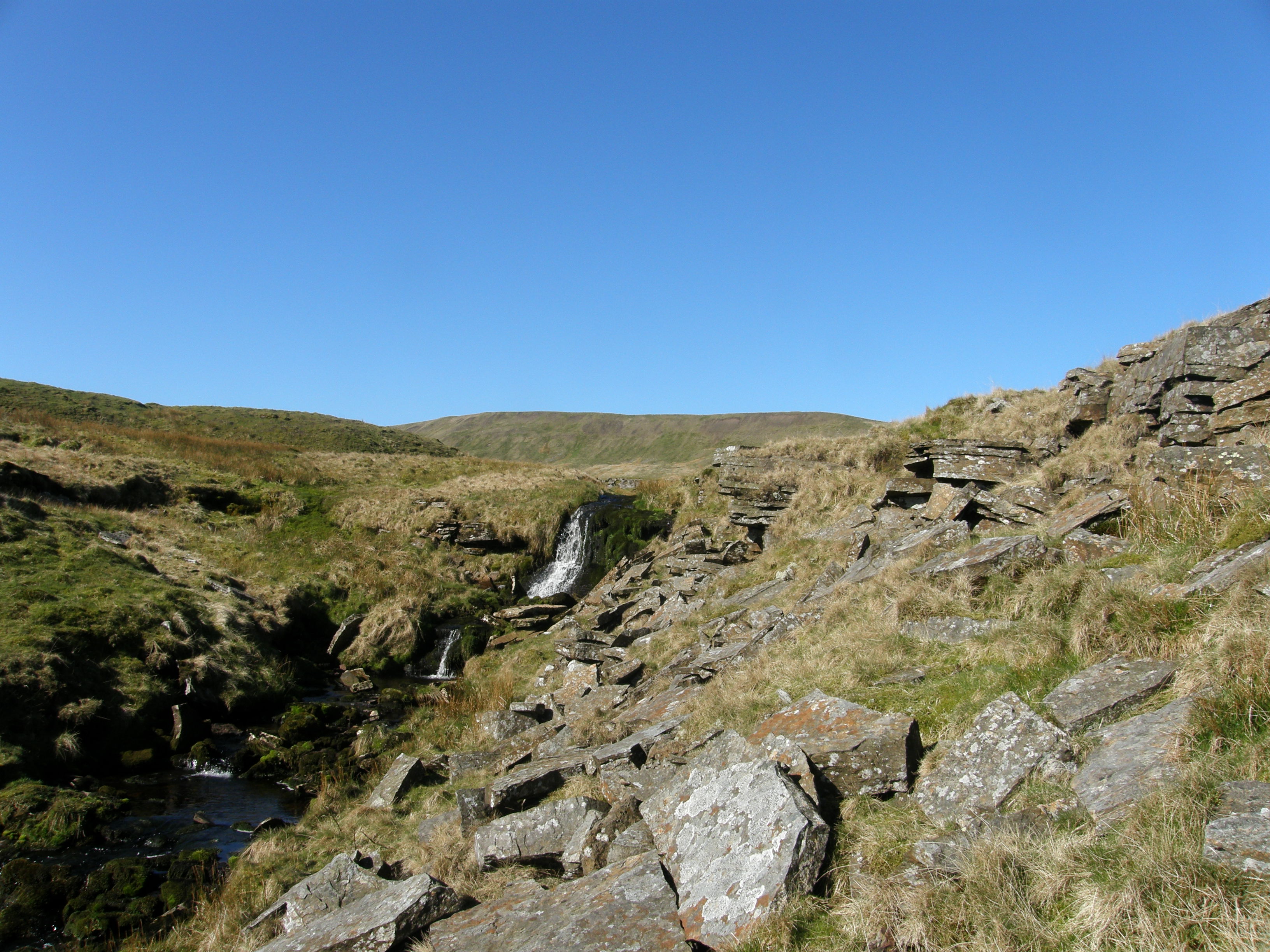 Not to worry: I still had a little more of the stream to enjoy.

I was quite surprised to be regaled by another enthusiastic wren which was perched on a mid-stream boulder. I can’t help thinking that wrens are garden or hedgerow birds and therefore a little out of place so high in hill-country.

Hereabouts limestone predominates and the stream disappears and reappears in entertaining fashion. There’s also some pavement… 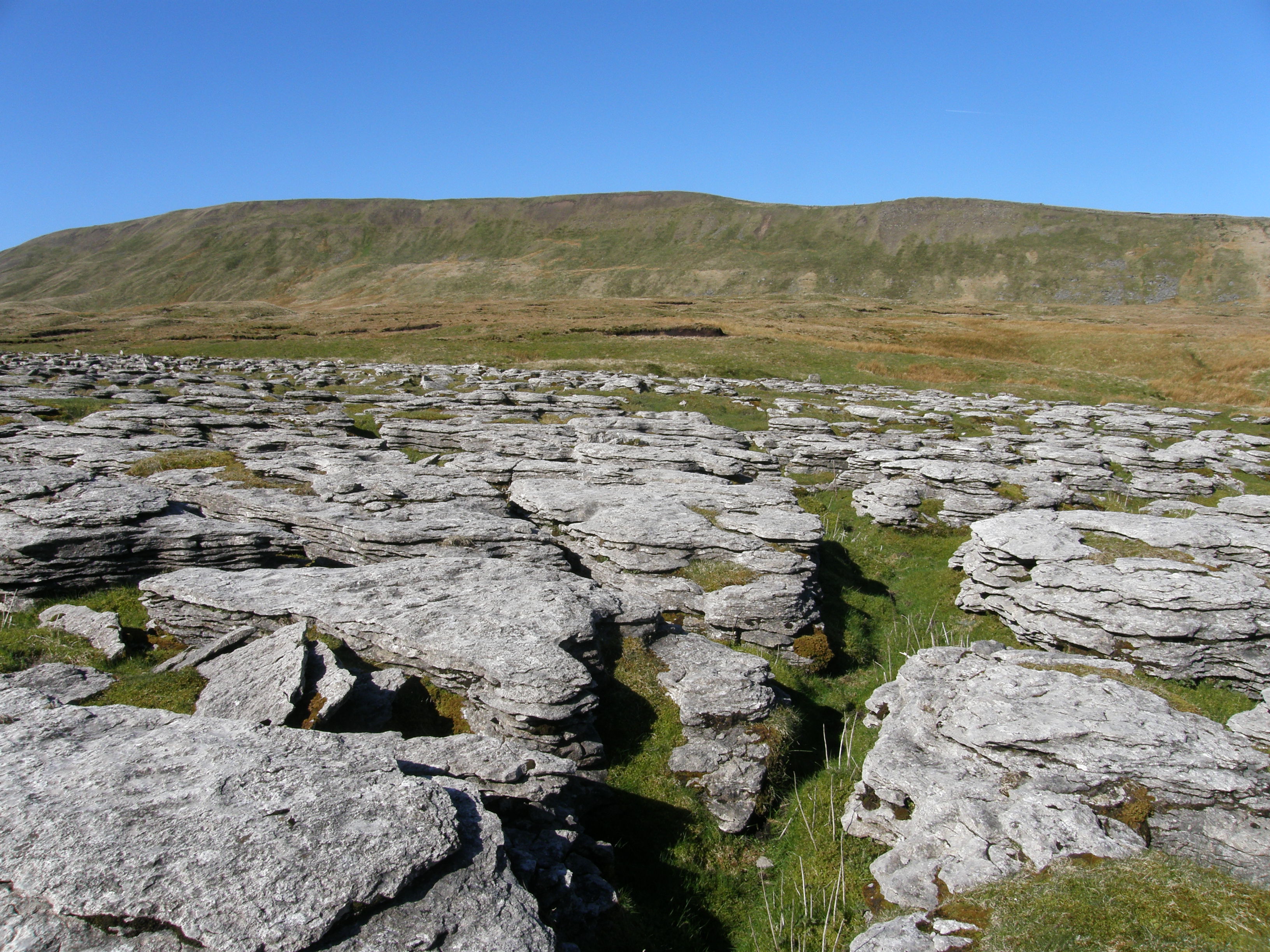 …and some potholes too, though I didn’t find those.

Perhaps the reason why the crowds were all further north on the flagged path is the fact that the area around Greensett Tarn…. 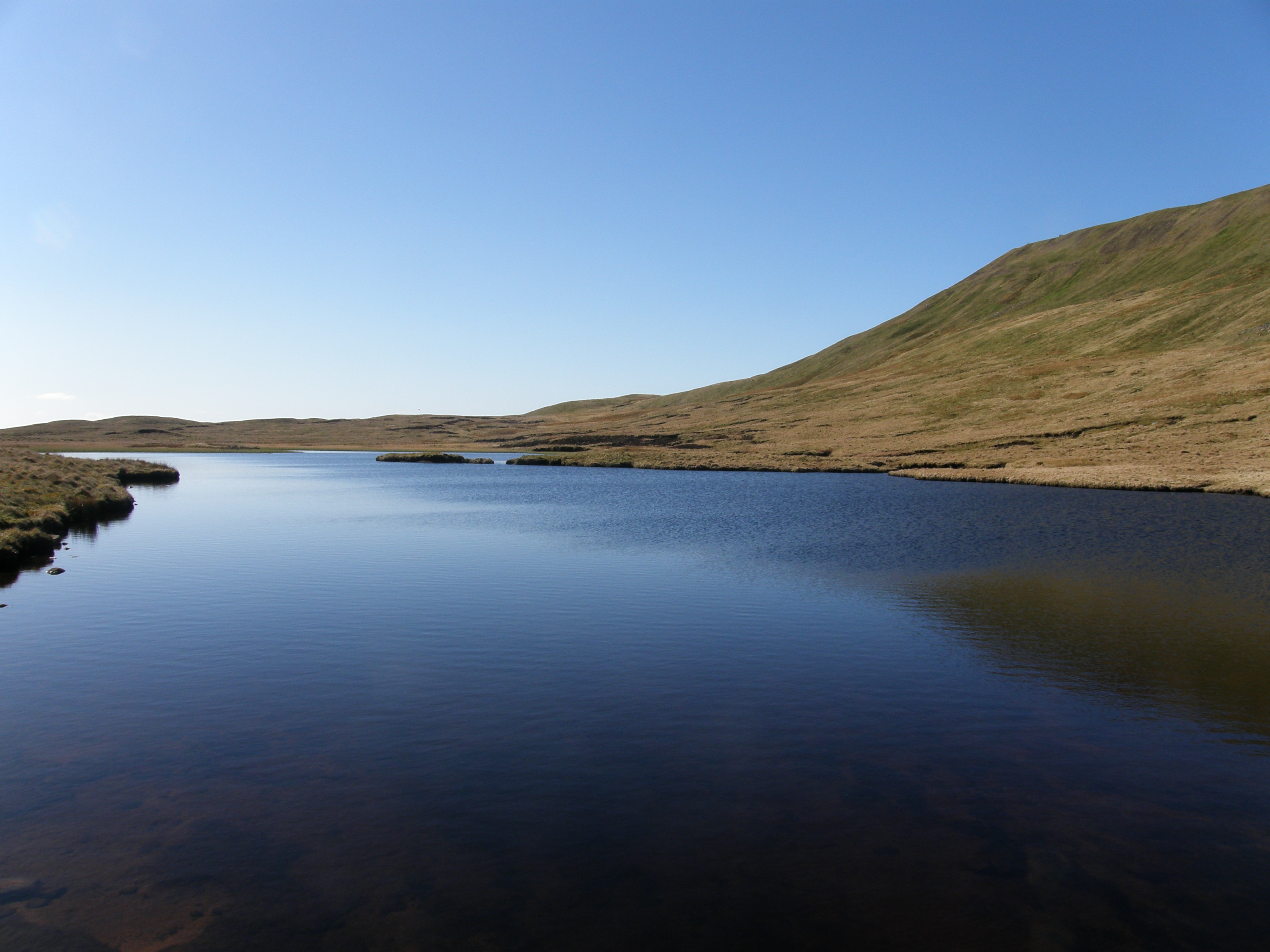 ….is very wet and boggy. It is called Greensett Moss and the word Moss in a place name never leads one to anticipate sand dunes, wadis and distant caravans of camels. 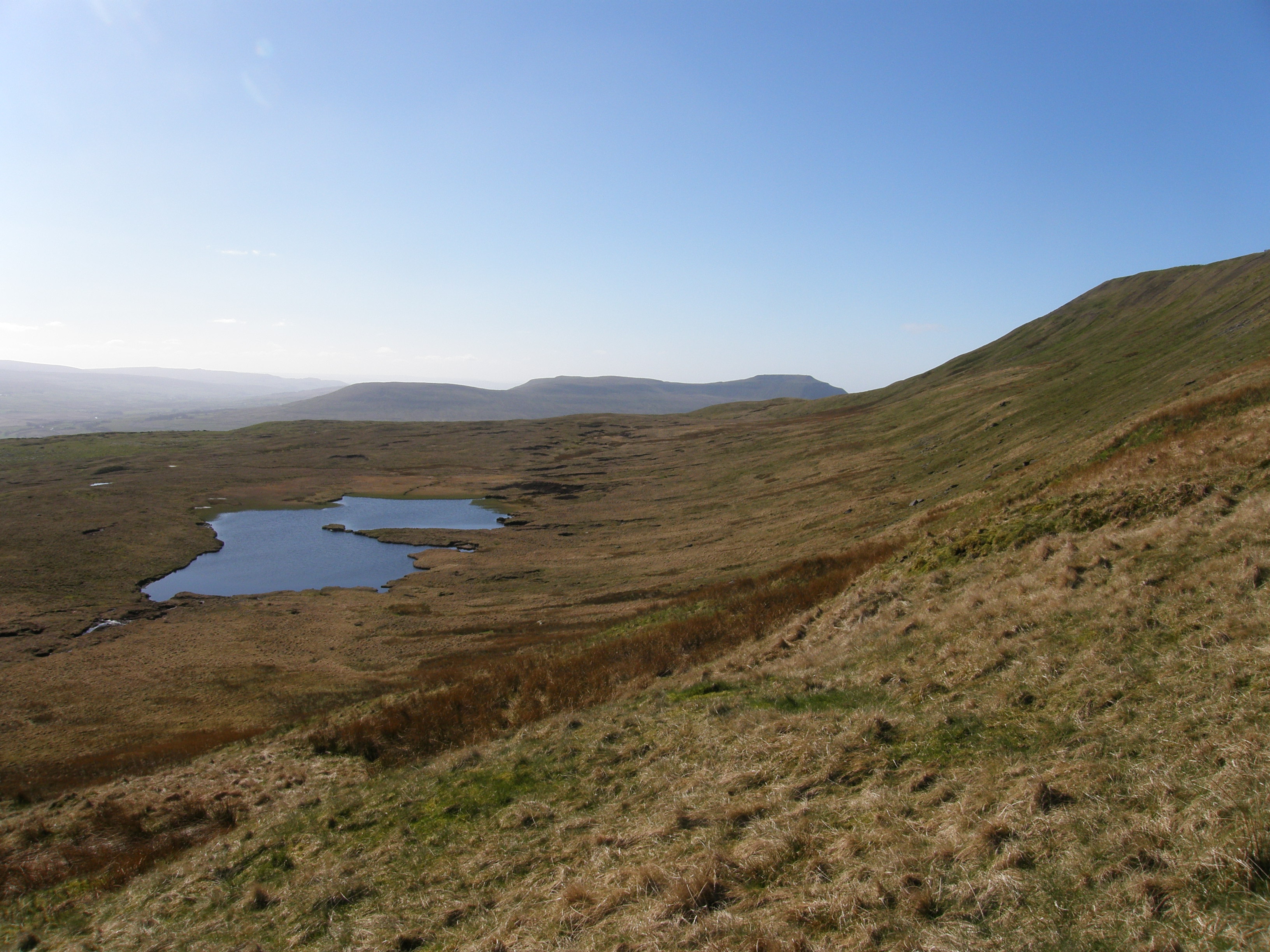 A short steep climb brought me on to the highly populous path and since the chill of earlier was decidedly banished, I waited for a lull in the convoy and switched my trousers for my temperature-regulation ultra-high air-permeability leg-wear -  otherwise known as shorts. 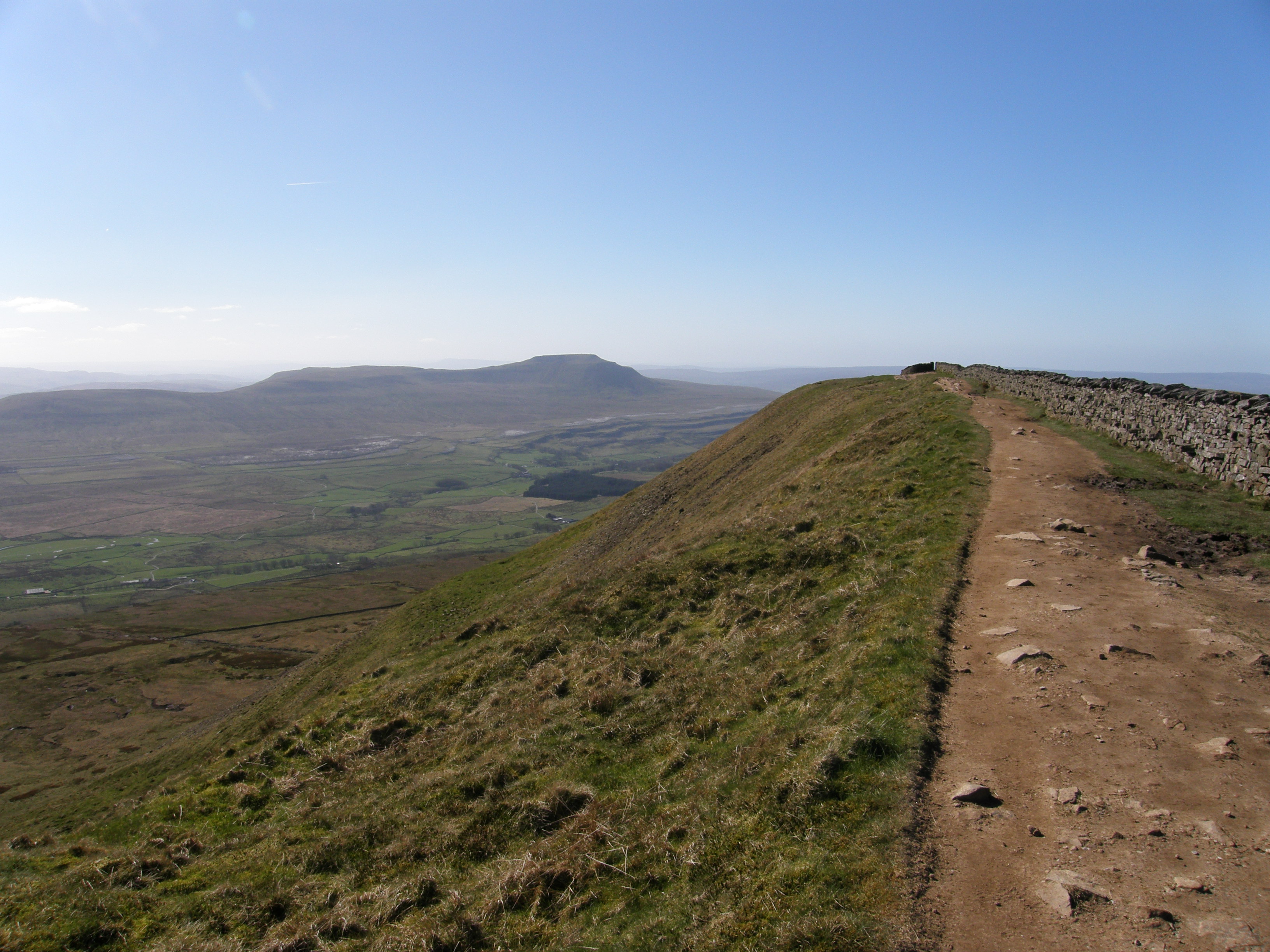 There’s a little walled shelter by the trig pillar on Whernside, and fortuitously, nobody was using it. Out of the wind there it was really quite warm. Soon the kettle was humming again and all was right with the world. There were quite a few people about: there seemed to be a bicycle maintenance class in progress, and a small party underway nearby, but a couple who joined me in the shelter told me that I was lucky to be there on such a quiet day, when no charity Three Peaks walks were mobbing the area. 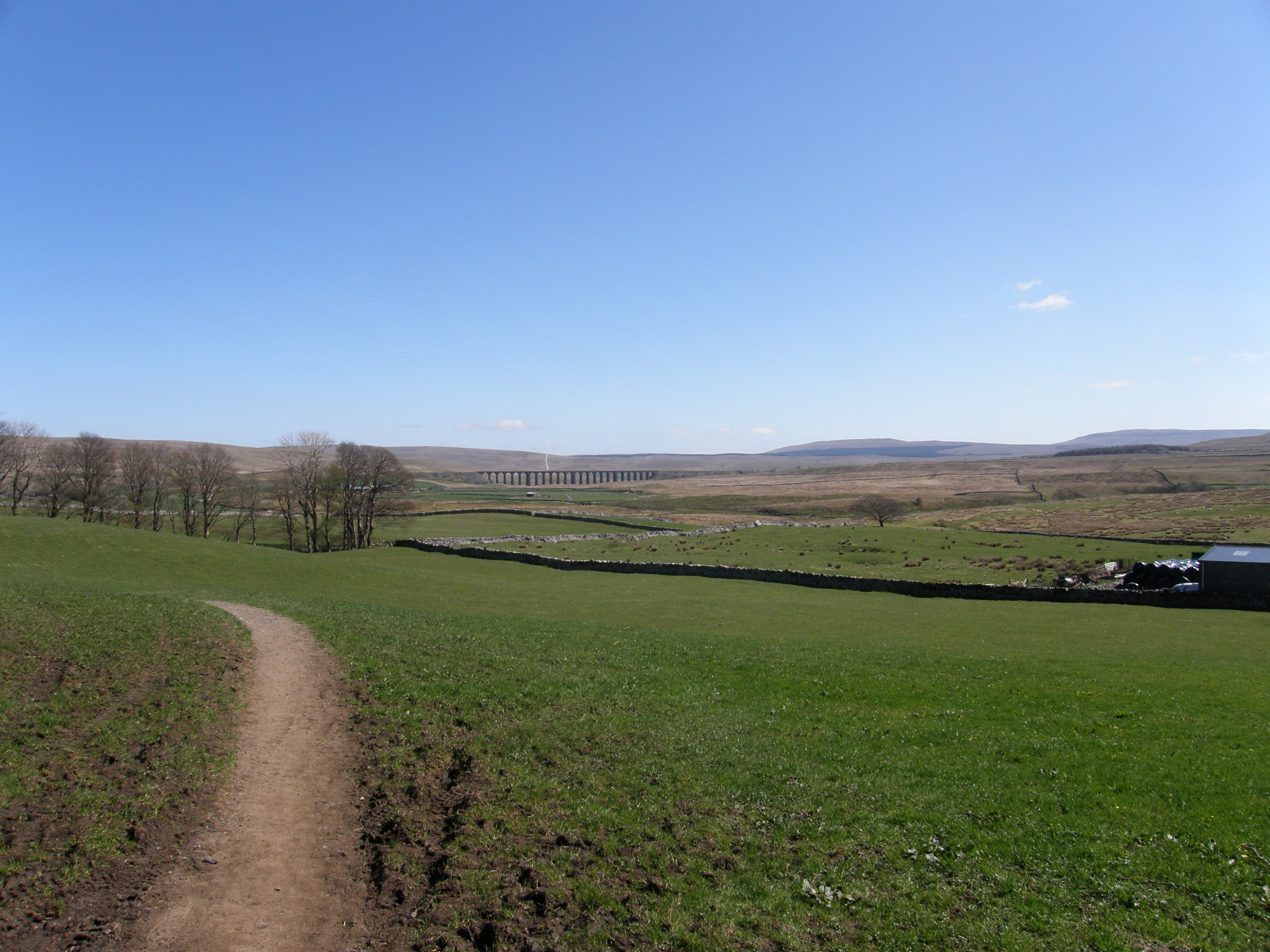 Wainwright advocates a very direct route down from the top. I opted for the main tread down the ridge a little and then steeply down into the valley. The wander back to Ribblehead via Broadrake, Ivescar and Winterscales Farm was balmy and butterfly blessed. 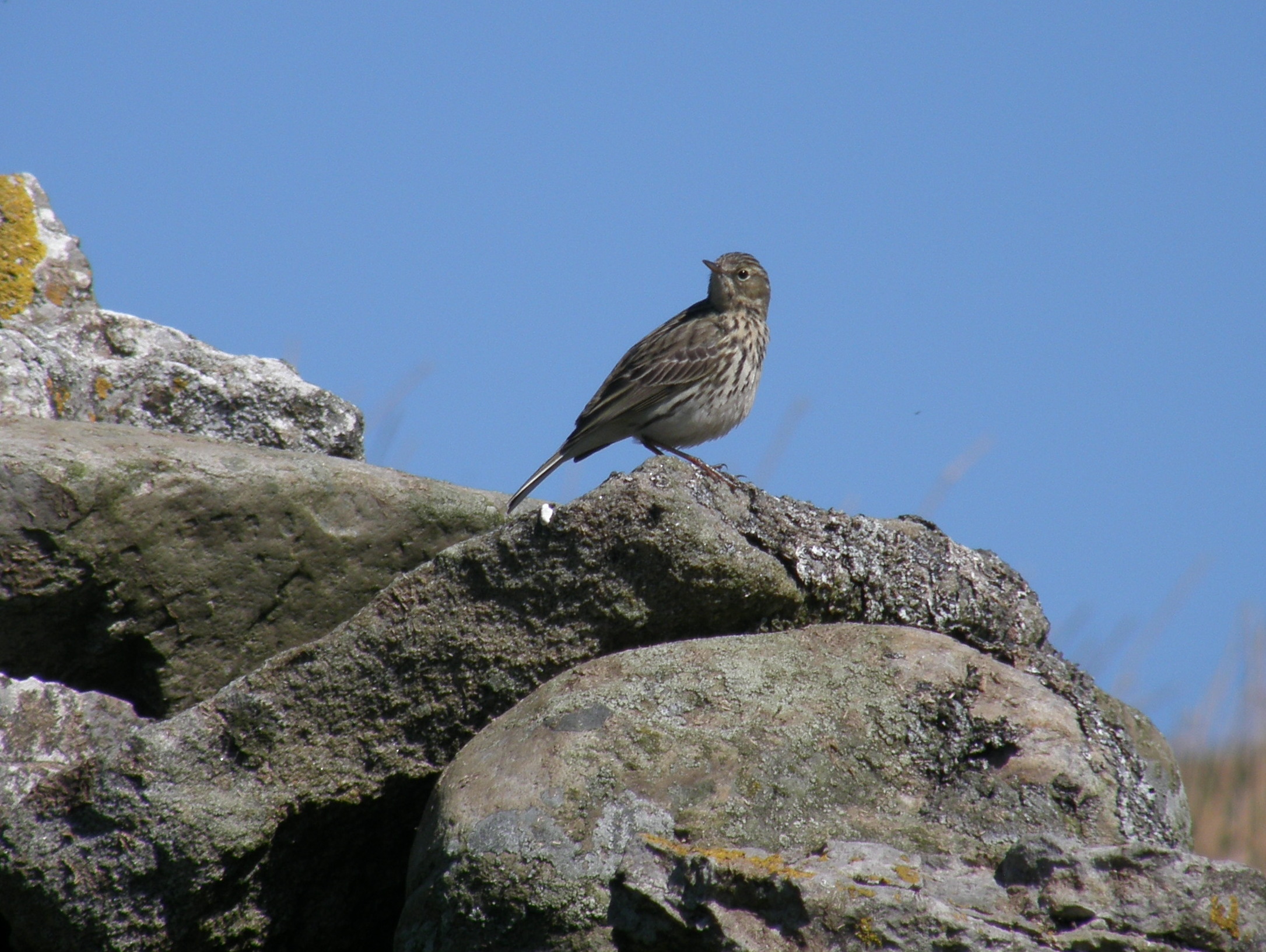 This engaging bird posed quite obligingly on a wall-top. A meadow pipit? 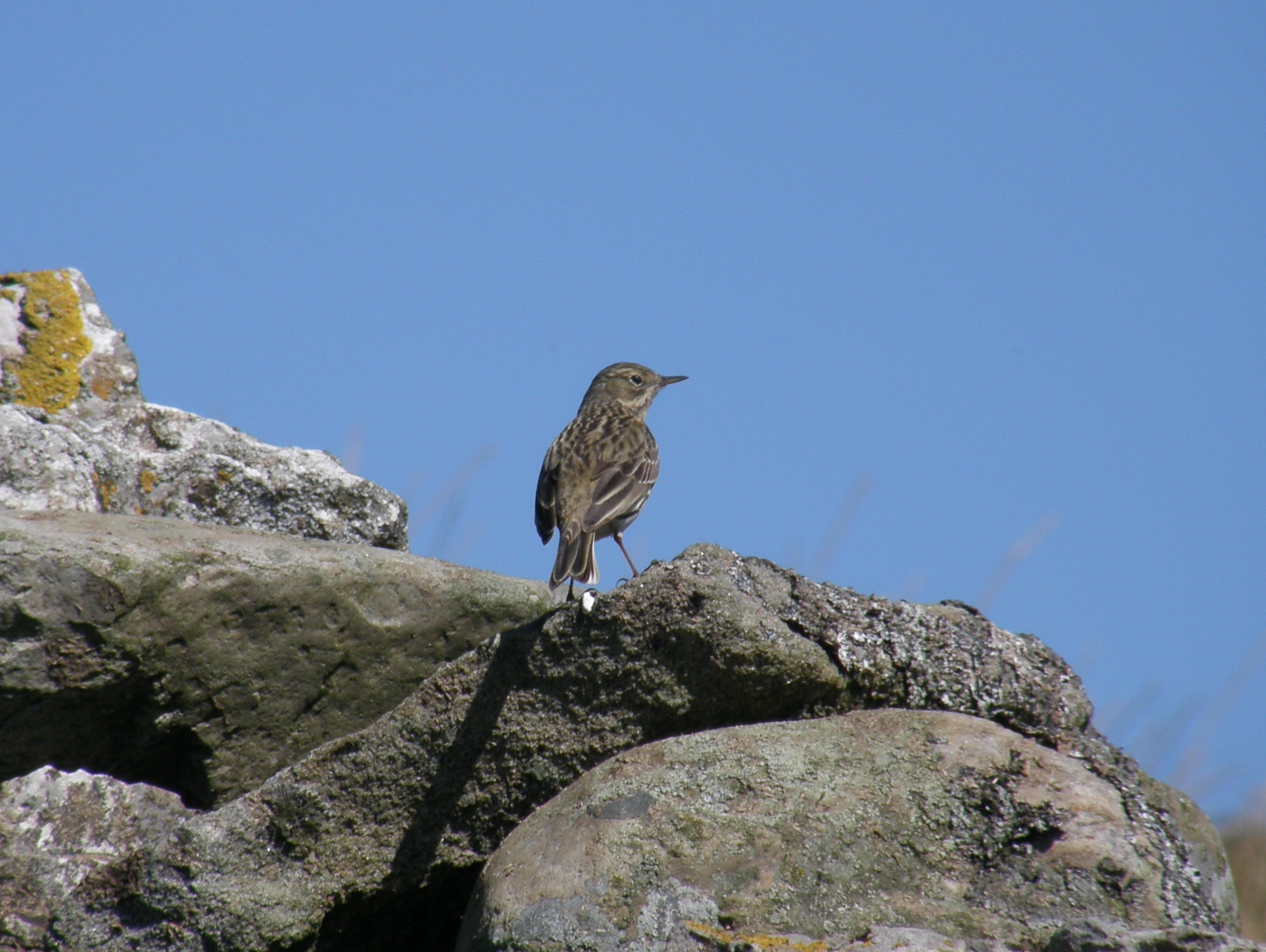 Soon I was back at the viaduct and having yet another brew. I’d promised to be home in time to cook tea, but the kids had been invited to a party and would be out all afternoon, leaving me with a fair bit of leeway. So – what next?

7 thoughts on “Whernside from Ribblehead”