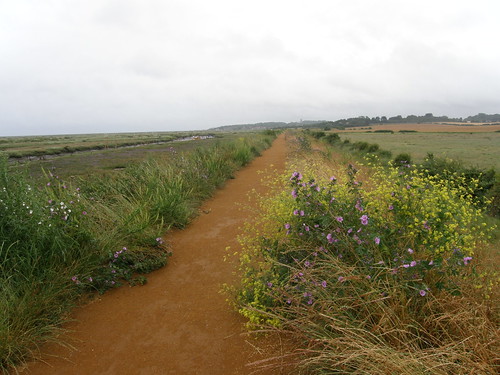 I’ve been at this blogging malarkey for quite some time now, and though I get frustrated sometimes when it seems that I’ll never catch up with myself, I must enjoy it, or I wouldn’t still be at it, six and a half years and six hundred and seventy posts down the line. I’ve written before about the benefits of keeping a record and of being aware that you intend to do so. Then there’s the Social Media side of things, although I’m only too aware that I often fall down badly on that front. There have been a few freebies along the way too – bits of gear, a few books and, most notably, a trip to Jersey. But here’s a new and totally unexpected development: an old school friend tracked me down via this blog and invited me to a reunion of our A-level maths class. 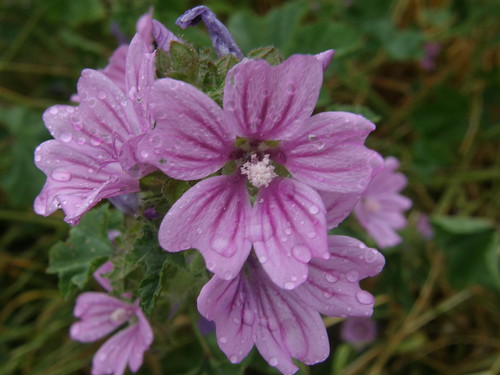 The weekend get-together took place in Norwich at the beginning of July. Norwich is a bit of a long way from just about anywhere, but it’s a particularly long way from Silverdale. Having abandoned my original, deranged plan of driving down on the Friday evening (it’s a good job I did, the M62 was shut at Junction 25 and I spent an hour or two queuing through Huddersfield), I arranged to meet the others on the coast on the Saturday Morning. I’d left my half-way stopover in Blyth, just off the A1, very early, and arrived with some time to spare and so had a little wander along the North Norfolk Coast Path. 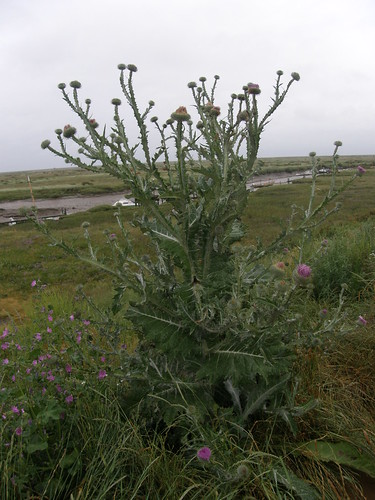 Very nice it was too, despite the grim weather. I’ve subsequently done a bit of lazy internet research and I have to say, this looks like a very attractive path. This section, at Morston, was resplendent with unfamiliar flowers. 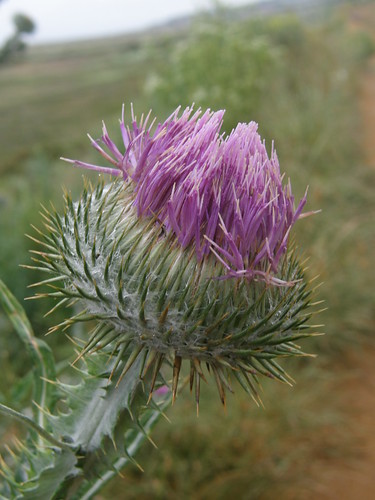 I think that this (and the photo above) is woolly thistle.

The others arrived in plenty of time for the boat trip we’d booked. Boats go out from Morston Creek and round to Blakeney Point. 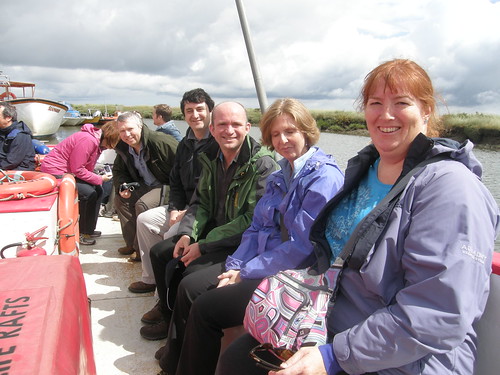 …well, not me, I was taking the photo. Needless to say, they haven’t changed in the thirty years since we left school. Well not much. None of us live in Leicestershire anymore, but I’m not sure what that tells us. Although it’s certainly not thirty years since we last met, it could easily be twenty, at least for me, and so we had a lot of catching-up to do. But what’s germane to this blog is the boat trip itself: 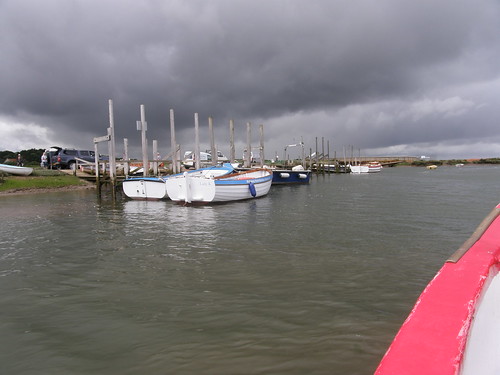 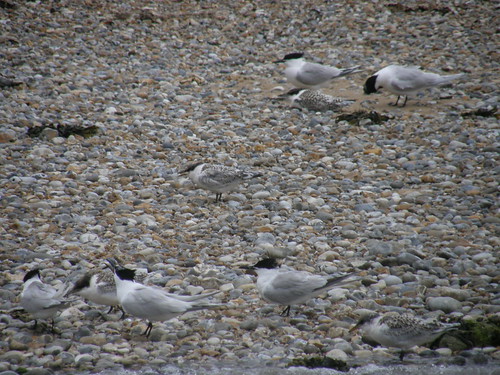 The beaches, and the skies above them, were busy with terns. These are sandwich terns, and juveniles (note the black beaks and legs and the tufted hairdos). 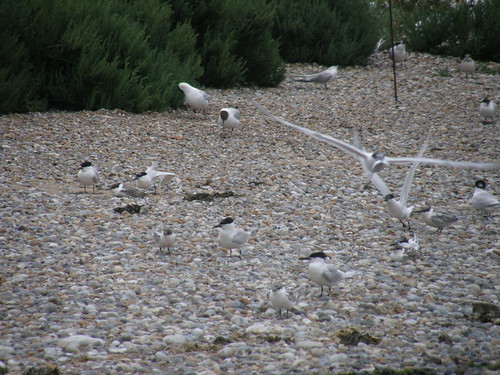 And again. All of the photos were taken from a moving boat, which didn’t help with the quality. That’s my excuse anyway. The out-of-focus bird in the air had a fish in its beak. 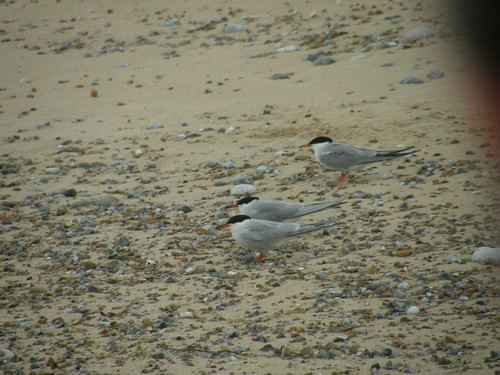 I think that these are common terns, with yellow beaks and legs. 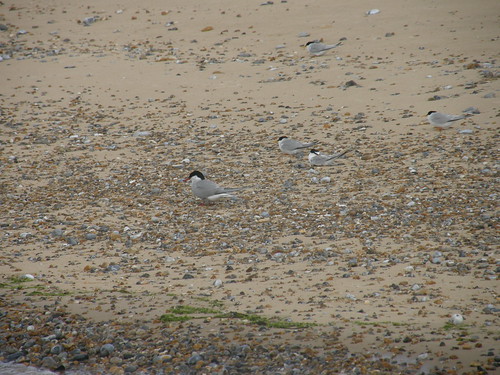 The two smaller birds here are little terns. You can’t see it without zooming in, but the little tern has a distinguishing black eye-stripe which is the telling detail. 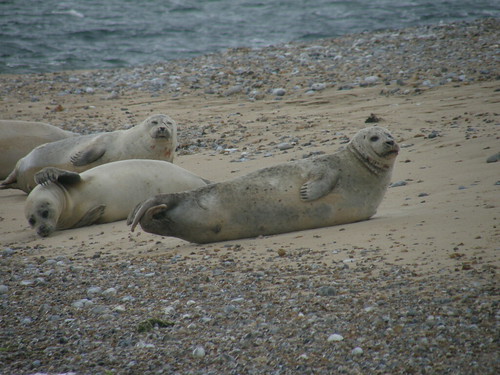 The other highlight was the seals. 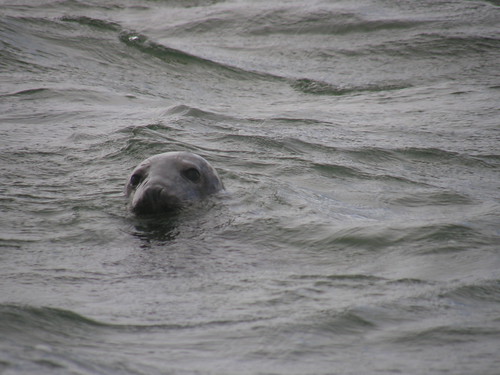 Common seals pup in the summer, so the opinion offered was that the seals on the beach were common seals, and the seals in the water would be grey seals, which give birth in the winter. I’m not sure it was that simple however. 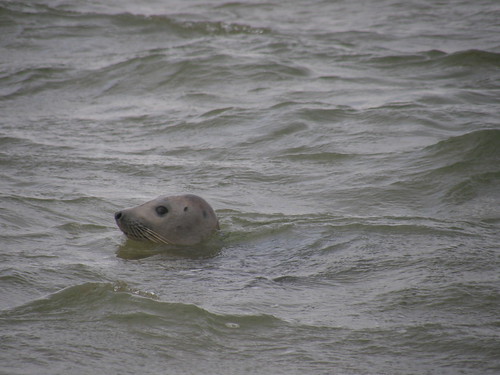 And, whilst it’s meant to be easy to tell the difference, I’m not confident, so I shan’t venture an opinion. 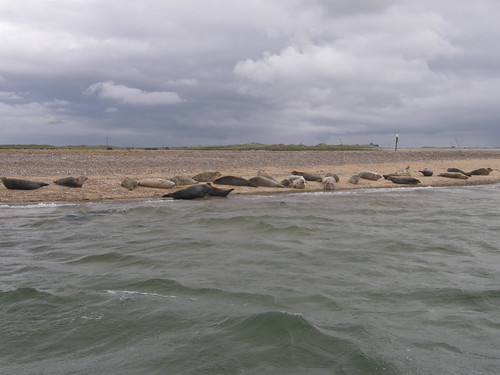 We had a bit of a walk on the spit of land which forms the point, visiting the old coastguard station…. 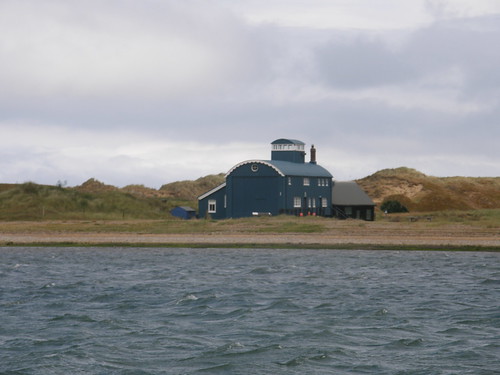 There were also a couple of old lifeboats moored in the channel. I was intrigued by the fact that they apparently had a wooden shed constructed on the deck. 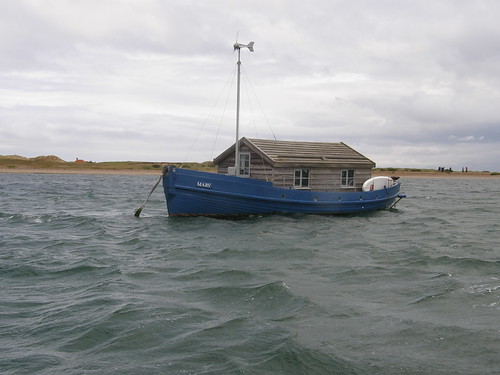 Not sure if that’s part of the original design or a more recent attempt to emulate the Skylark.

After the excellent boat trip we drove a little down the coast to Cley. 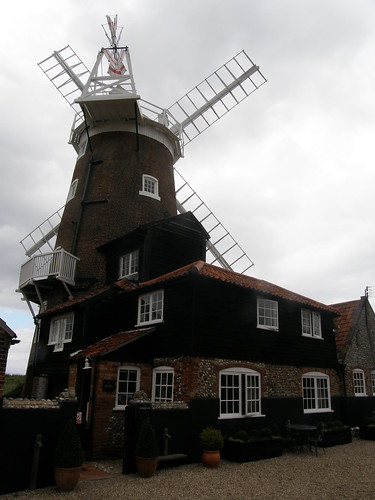 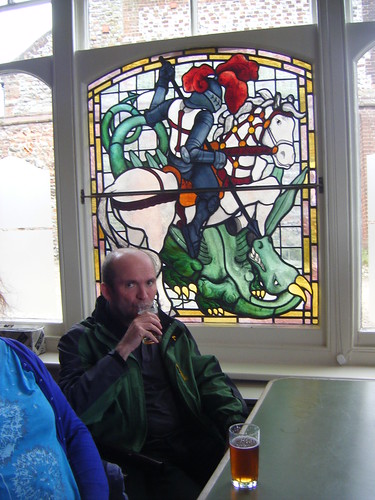 Long-suffering readers will now that I’m quite partial to a stained-glass window. Especially if it depicts St. George dispensing with the poor old dragon. Not sure why D is looking so guilty and/or furtive about his beer. 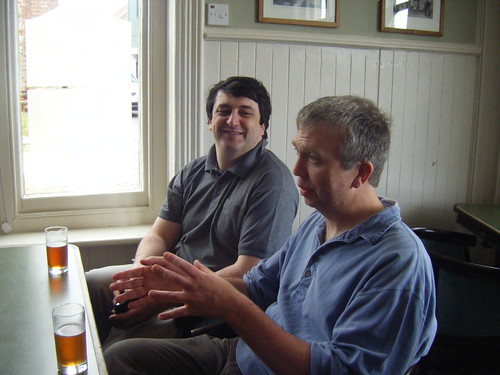 I shan’t attempt to summarise the remainder of the weekend, except to say that it was thoroughly enjoyable.

I will however, mention the campsite where I stayed, at Whitlingham Broad. It’s a cracker. Quiet, well-organised, cheap. If you need or want to stay in Norwich I can heartily recommend it. (Yes, everybody else stayed in hotels, but I like camping. And I’m a  skinflint)