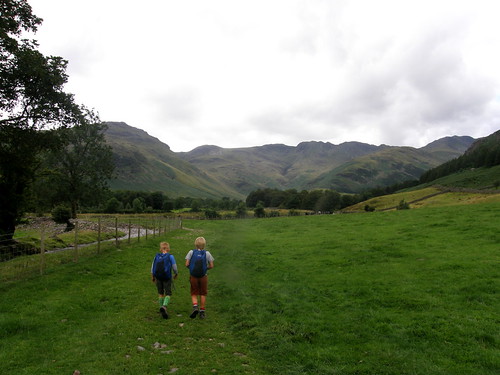 In previous years we’ve usually had another foray to look forward to after our camping trip to Wales, but after our family centred holidays in Switzerland this winter and Virginia last summer, we felt that a little belt-tightening might not go amiss. Also – there’s lots of good stuff on our doorstep, so why not enjoy it?

To that end, not long after we were back from Wales I took the boys to Langdale for the day. (Originally A had intended to be with us too, but she wasn’t feeling too well unfortunately.)

We parked in the National Trust car park by the New Dungeon Ghyll pub, being far too late to get into the smaller car park more conveniently situated a little further up the valley. This meant that we started our route with a walk through the meadows beside Great Langdale Beck, with the unexpected consequence that Little S was attacked by a cow. Well menaced anyway – I suppose we were probably being quite loud, and we were in the middle of the herd – cows and their calves. One of them charged at S, there’s not really any other way of describing it. S fell backwards and screamed and the cow stopped. When I got between S and the cow she feinted at me too – I’d thought at first that she was trying to get past us, and that the ‘threat’ to S had been unintentional, but now I was convinced of quite the opposite.

I picked S up and dusted him down – he was shaken but unhurt. He was also a lot braver than I would have been in the same circumstances and agreed that we would continue past the herd again, this time staying closer together. The couple behind us, who had a small dog with them, decided to turn back. The cows had moved a little further away from the path and this time we were quickly through the gate without further incident. 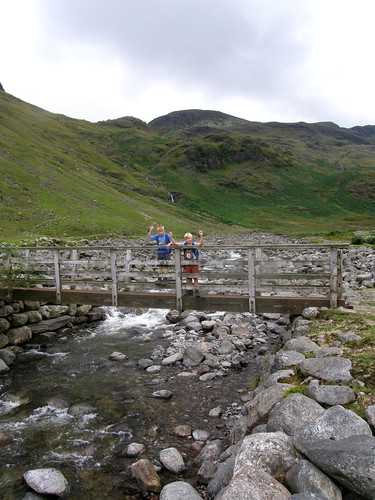 The kids were all keen to go Gill Scrambling –although their concept of that sport seems to involve total immersion in the water, which is not quite what I had in mind. I thought we would follow Crinkle Gill up onto Crinkle Crags – a quiet and very interesting way up to the top, which I’ve done three of four times before. 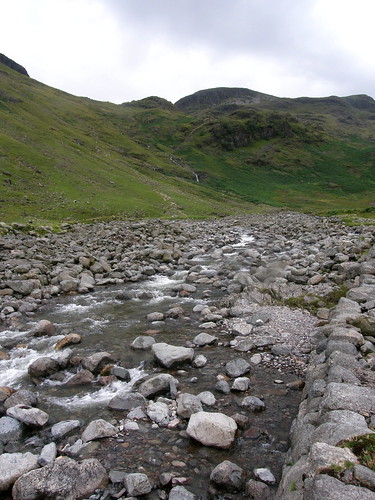 As we’d driven through Langdale, I’d already had a presentiment that all might not go exactly according to plan – the weather had been reasonably settled I’d thought, so I was surprised to see that Stickle Ghyll was a white ribbon across the hillside. All went well initially however, as we followed Oxendale Beck to the second footbridge and then diverted from the footpath into Crinkle Gill. 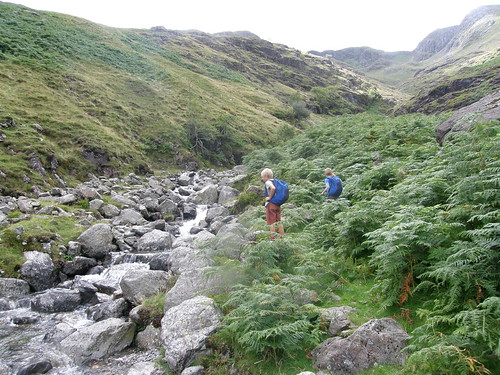 The boys were very excited, couldn’t wait to get their hands on the rock and their feet in the beck, and we were soon boulder-hopping our way upstream.

The slopes to either side steepened and the banks closed in… 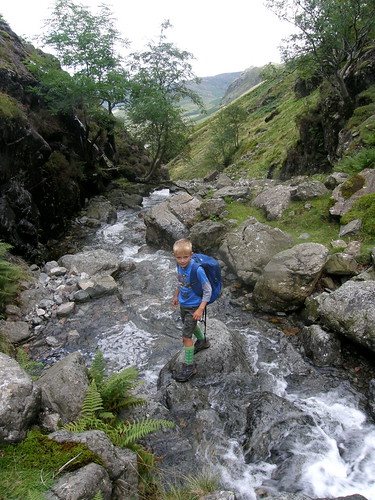 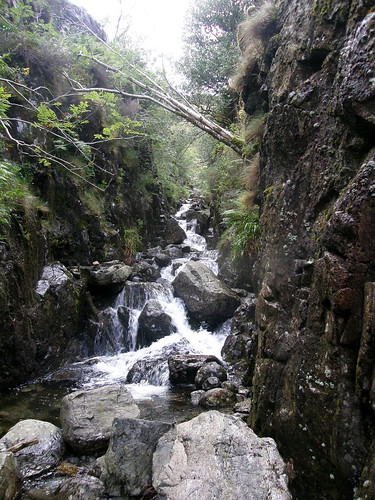 It maybe doesn’t look like it here, but there really was quite a bit of water coming down it, the noise was, I think, a bit intimidating, and for those with short legs it was a challenging little problem. We managed to negotiate a way past it, but B and I both got quite wet in the process. S kept dry by the simple expedient of throwing himself at slimy, unpromising holds and relying on me to catch him. Faced with several more small falls the boys both decided that discretion was the better part of valour and we retreated.

We found a rather delicate little traverse out of the ravine and then climbed steep slopes to some slabs on the shoulder where we stopped to survey the damage, change our socks and eat some lunch. 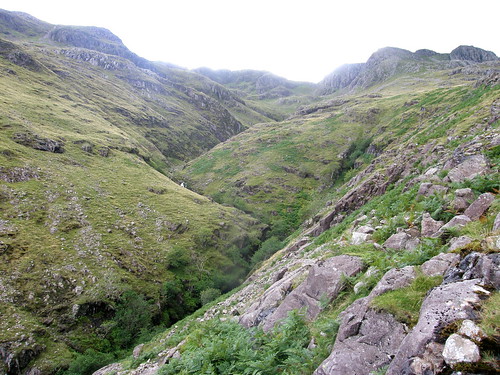 At this point, S would happily have returned to the car, and perhaps, in retrospect, we should have done that. He found the ascent heavy-going. I initiated the boys into the cult of ‘step-counting’ -  something I’ve been meaning to post about for an age, and perhaps will get round to sometime soon (when I’ve caught up) – and that helped for a while (Briefly – paused for a breather every 100 steps and for a longer rest every 500 steps) . He perked up too when we managed to string some crags together and make a bit of a scramble out of the route, but it wasn’t really until we had another lunch stop that he finally got his second-wind. 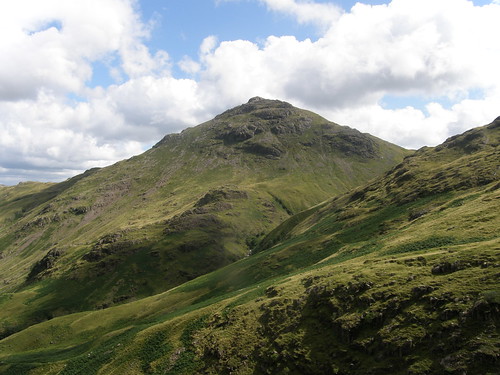 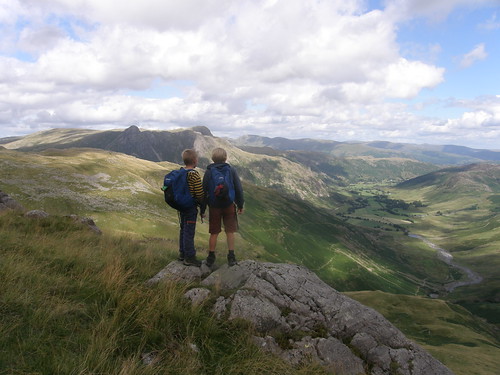 ‘Look at that view!’ 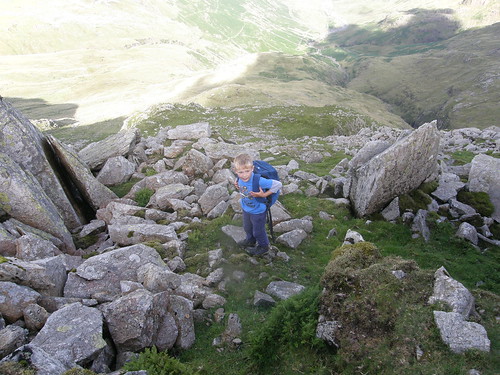 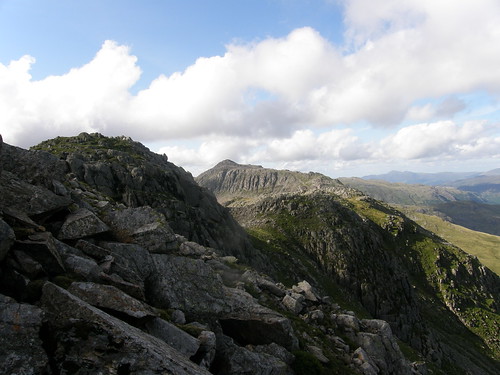 Eventually though, we arrived on Gunson Knott… 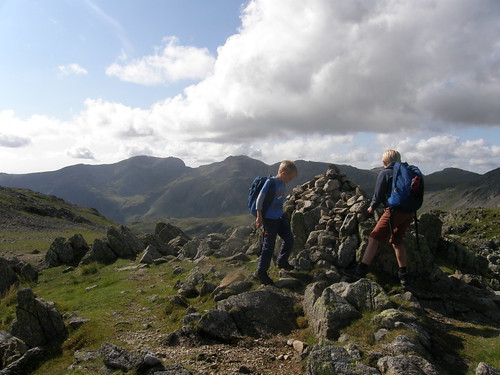 And then reached the top of Crinkle Crags…. 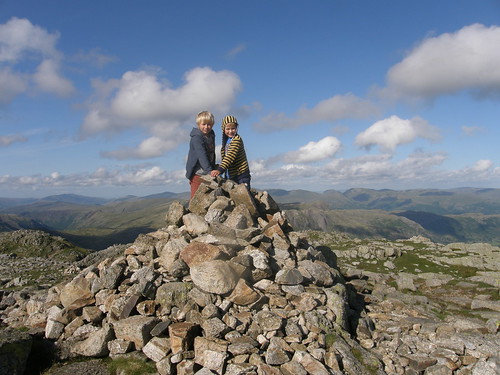 We’d started late and then made fairly slow progress – it was five o’clock by this time. At least that meant that it was quiet. There was one other party on the top – coincidentally, another chap with two boys. 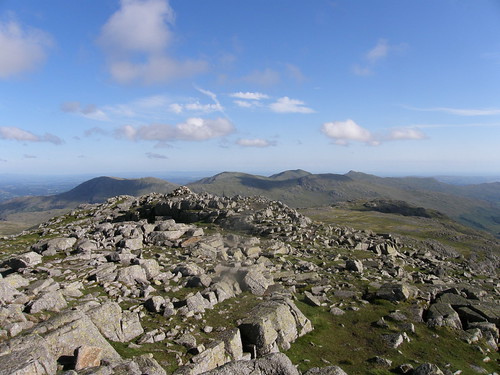 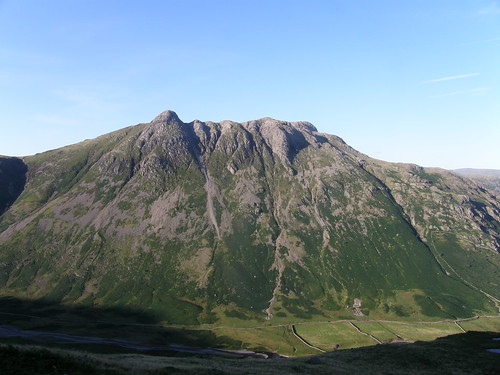 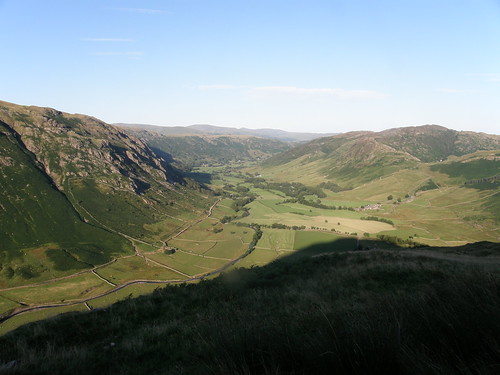 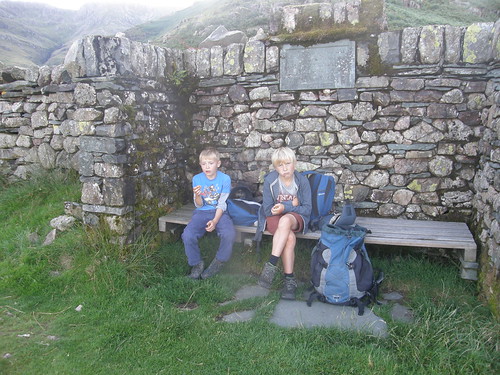 It’s a long old way via Three Tarns and down The Band, and really, the boys did very well, spurred on by the promise of ‘another ginger nut when we reach’…whatever prominent landmark I could see below us.

We passed back through the same cow field on the way back to the car, but they paid us no mind this time.

Stopping on the way home to stock up on victuals, we were thwarted again: the chip shop we tried was closed and we had to settle for petrol-station bought snacks.

I’m hoping to try something like this with the kids again, but feel that there’s a steep learning curve here: I remembered this route as a remote and picturesque way up Crinkle Crags with a modicum of very easy scrambling, but for the boys it was much more challenging than I had anticipated. The unexpectedly high water levels didn’t help. Back to the drawing board!

Anyway, I shall remember the day, with it’s steadily improving weather and air-clarity as one of the high-points of the summer, and I hope that the boys won’t be too scarred by their experience!

Crinkle Crags with the Boys, via Crinkle Gill

5 thoughts on “Crinkle Crags with the Boys, via Crinkle Gill”