For many years, every walk along the path which skirts the edge of Silverdale Moss has been enlivened by an encounter with an old friend – The Cloven Ash.

Seen from its northern side it looked like a typical mature ash – magnificent, but nothing out of the ordinary.

But from the South, it was more obviously remarkable…

…because of the cleft running through its middle.

These last two photos are from the first reference I can find to this tree on my blog, but even then I was making an intentional visit to it to see how it was getting on. I suspect that if I tried harder I could probably find earlier photos which document my relationship with this ash, but those pictures, if they exist, are harder to find because it was only in March 2009 that I started to think of it as ‘The Cloven Ash’, and call it that on the blog, which makes it easy to search for. The name in itself is probably part of the reason that the tree occupies a place in my affections – it always reminds me of Italo Calvino’s novella ‘The Cloven Viscount’ (which I probably had in mind when I coined the soubriquet). It’s a book that I love, and that I’ve read many times, along with its companions ‘The Baron In The Trees’ and ‘The Non-Existent Knight’ which form Calvino’s ‘Our Ancestors’ trilogy.

Every time I walked past the Ash I would convince myself that the cleft had grown slightly, and then decide that perhaps it hadn’t. I could never make up my mind.

Looking at the photos now: it was growing wasn’t it, a least a little?

On windy days, the two halves of the tree would sway slightly together and apart in a steady rhythm. I suppose I was rubber-necking really: continually revisiting the site of a potential accident.

And then this October just gone, on the way back from Beetham Fell with Our Camping Friends I was shocked to discover not only that… 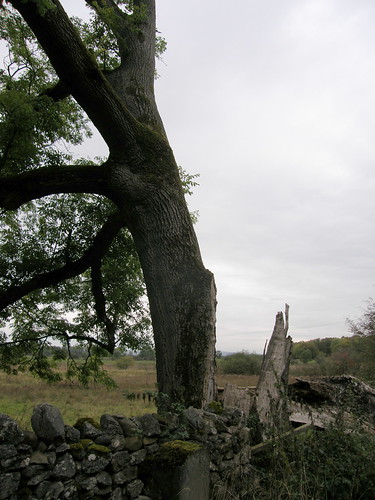 …half of the tree had gone… 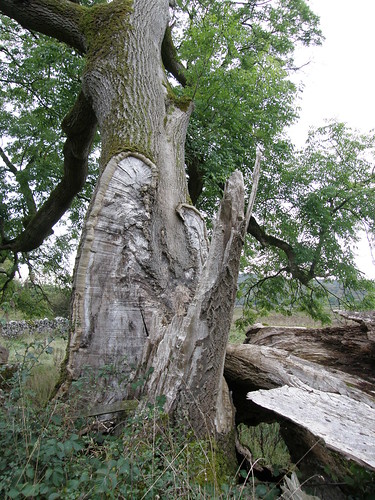 …but also that the fallen wood had been cut down in size a little and tidied up and that the sawn logs were covered in moss, suggesting that it had been down for quite some time. I suppose the fact that I’d missed that reflects the relative infrequency of my local walks of late.

And then, as I returned home from our lunch at The Ship in Sandside, a further outrage… 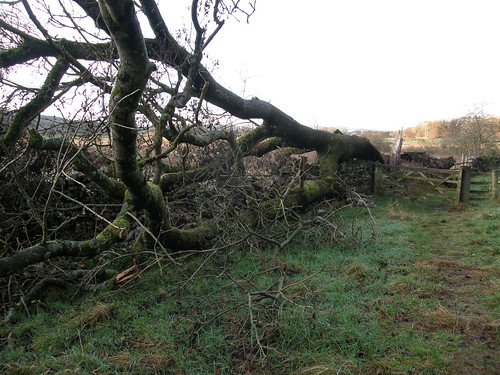 …the other half had also toppled. The Cloven Ash is no-more! 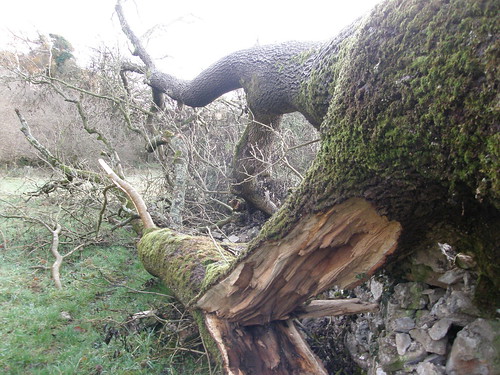 The dry-stone wall hadn’t come very well out of the disagreement. 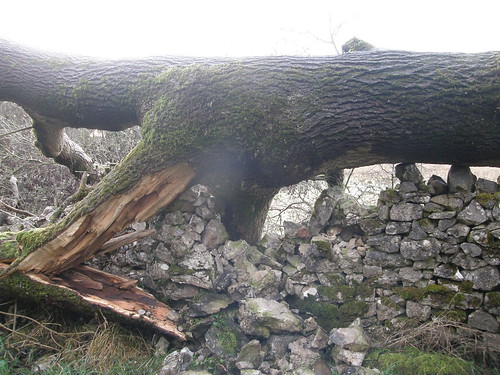 Although, I have, in a way, been gleefully anticipating the collapse of this tree and all of the destructive potential that implied, since I first noticed the fault line which ran through it, I am now, of course, very sad to see its demise.

I suppose I should greet the oyster mushrooms which had already sprouted from the base of the exposed trunk as cheerful messengers of regeneration and rebirth, like fungal Hare Krishnas . Only more grey. 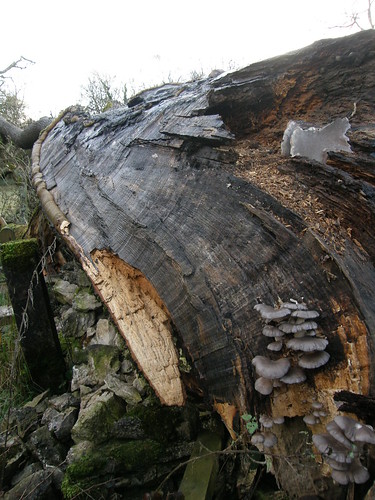 You can find references, and/or photographs of or about the Cloven Ash on older posts here.

The Cloven Ash: a Retrospective

8 thoughts on “The Cloven Ash: a Retrospective”