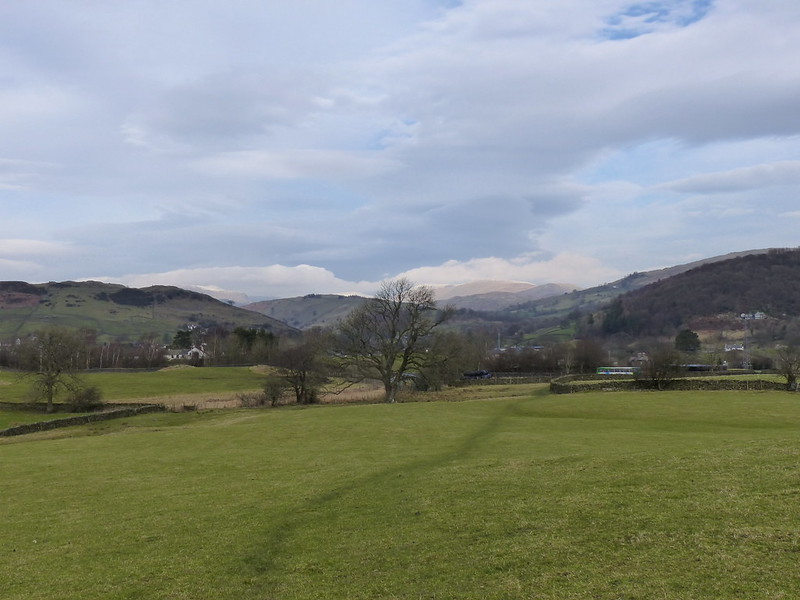 Just out of Staveley, looking back towards the Kentmere valley.

February half-term. TBH and the ankle-biters – I shall have to stop calling them the ankle-biters, they’ll soon be looking down on me and patting me condescendingly on the head – as I was saying, TBH and les enfants terrible were meeting some friends in Staveley to celebrate a birthday with a short stroll, a meal in the marvellous Wilf’s Cafe and a visit to Staveley’s well-appointed children’s playground (they aren’t so grown-up yet that they can’t appreciate swings and slides etc.). I suppose I could, perhaps should, have been sociable and joined the party, but this seemed like too good an opportunity to miss – a chance to walk point-to-point. In particular, to walk the full length of Cunswick and Scout Scars. So that’s what I did.

I’m still enjoying playing with the panorama function on my camera, even though the results are rarely what I hope for. If you click on the photo (or indeed any of them) you can see a bigger version on flickr.

A scheduled nine o’clock meeting was hastily put back to ten after phone calls revealed that none of the invited parties were remotely ready for the off. We finally made it to Staveley shortly after eleven. Fortunately our friends are very understanding. And almost as bad at timekeeping as we are. 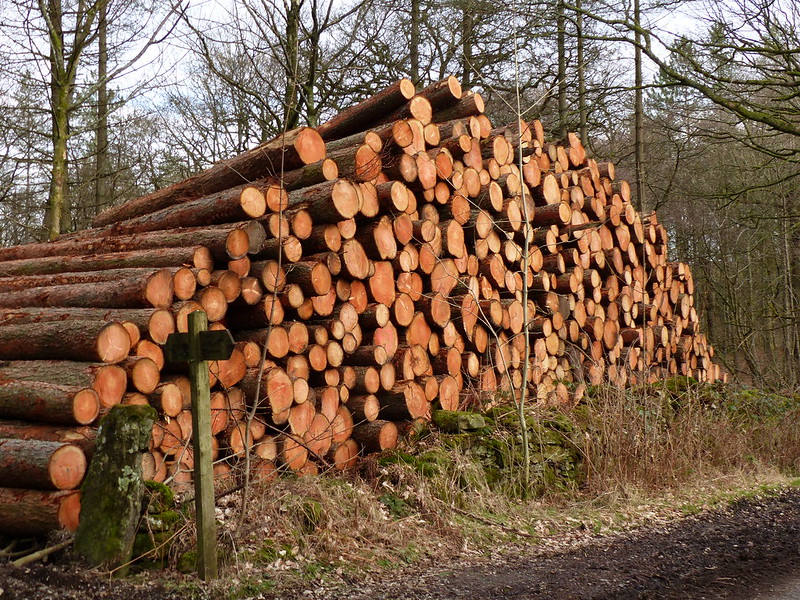 The weather started very promisingly, with one brief spell of quite warm sunshine. The walking was very pleasant, although progress was slow since there didn’t seem to be any paths heading quite where I wanted to go, necessitating some frantic zig-zagging. Tree-felling in the area around Ratherheath Tarn seemed to be targeting all of the non-native conifers, whilst leaving the rest of the woodland intact. 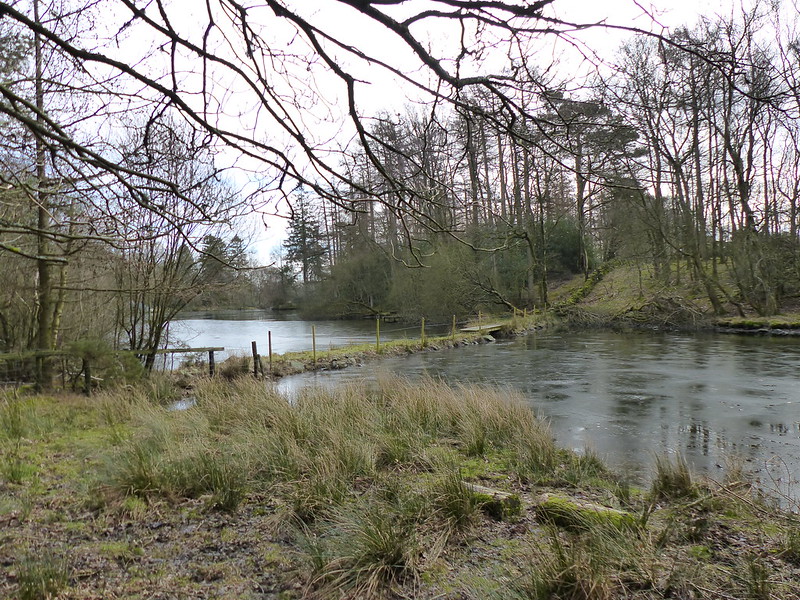 The tarn itself still held a thin skin of ice from that morning’s frost. 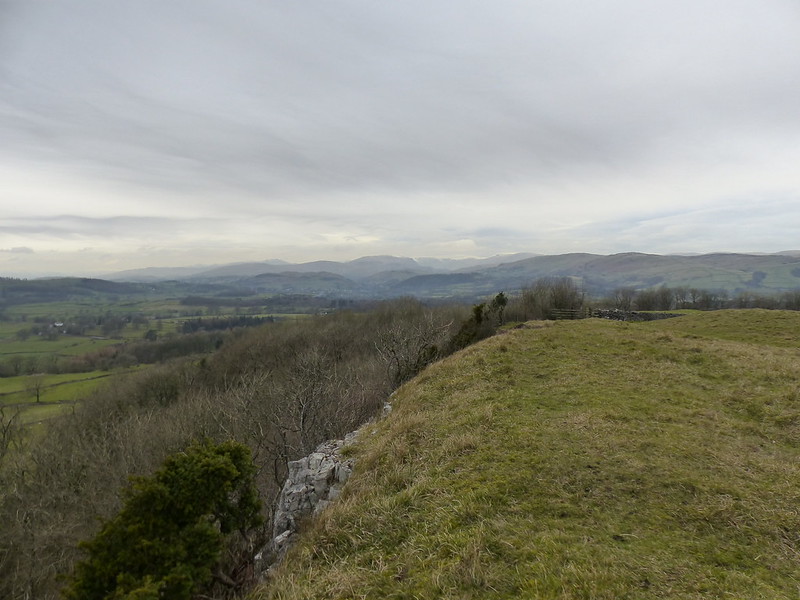 I can’t help feeling that if Cunswick Scar and its neighbour Scout Scar and, across the valley, Whitbarrow Scar were anywhere else in England than on the borders of the Lake District, then these long limestone escarpments would be far more famous than they are.

Much as I enjoy a circular walk, or an elliptical walk, or any closed loop route, there’s something particularly satisfying about walking from A to B. A big part of the appeal are the views ahead to what’s to come and the views behind to what’s been and gone. The wide-open nature of Scout Scar really opens up those long vistas, even when the weather is deteriorating and the clouds are drawing in.

This is the view… 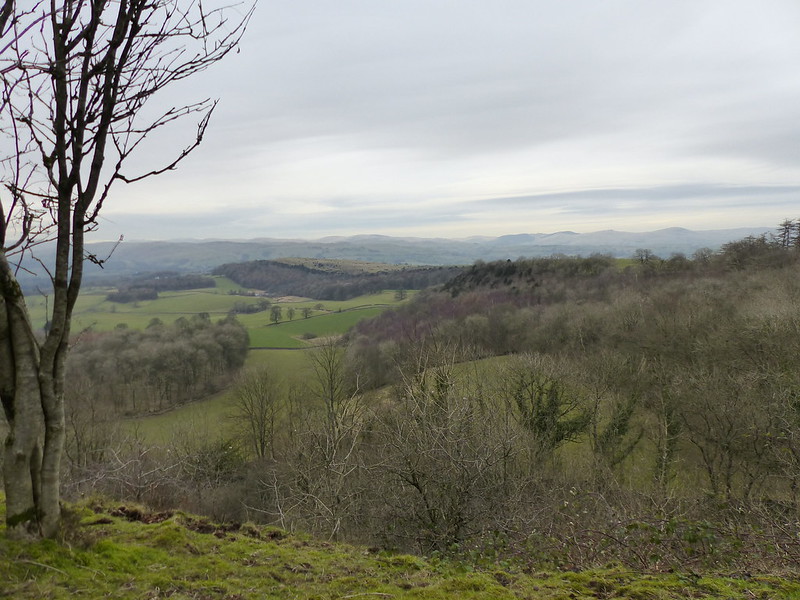 …from the bench on the northern end of Scout Scar where I stopped for a brew and some lunch, looking back on Cunswick Scar, which in fact is in two sections. 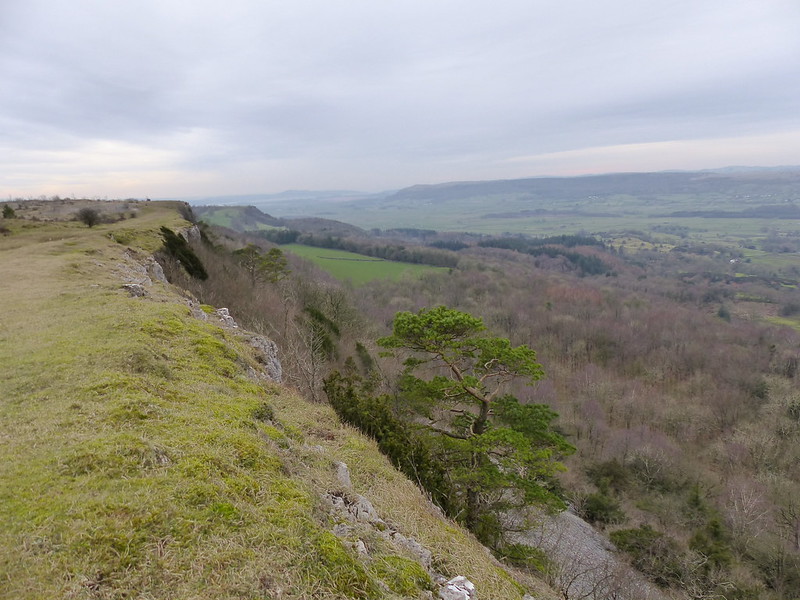 Is a view south along Scout Scar and across the Lyth Valley. The hill in the distance is Arnside Knott on the far side of the River Kent. 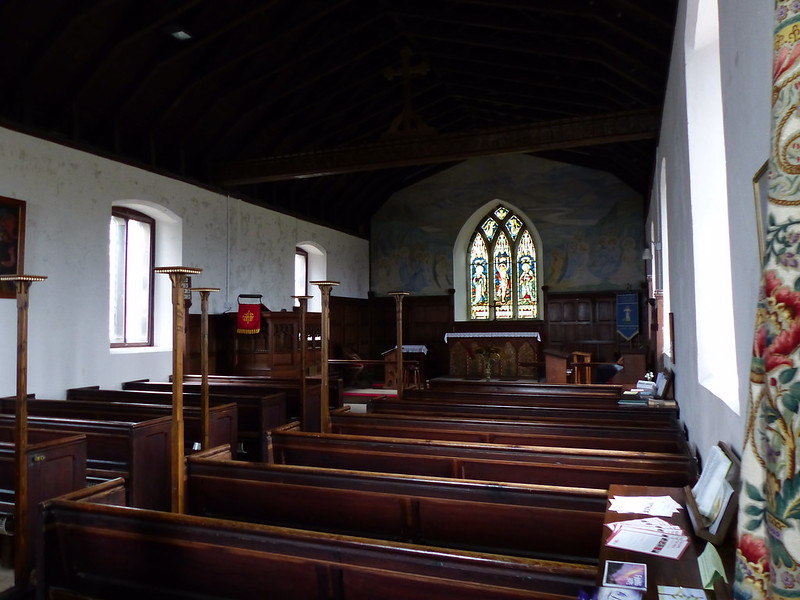 The interior of the tiny St. John’s church Helsington, which sits in a remote spot on the Scout Scar ridge. 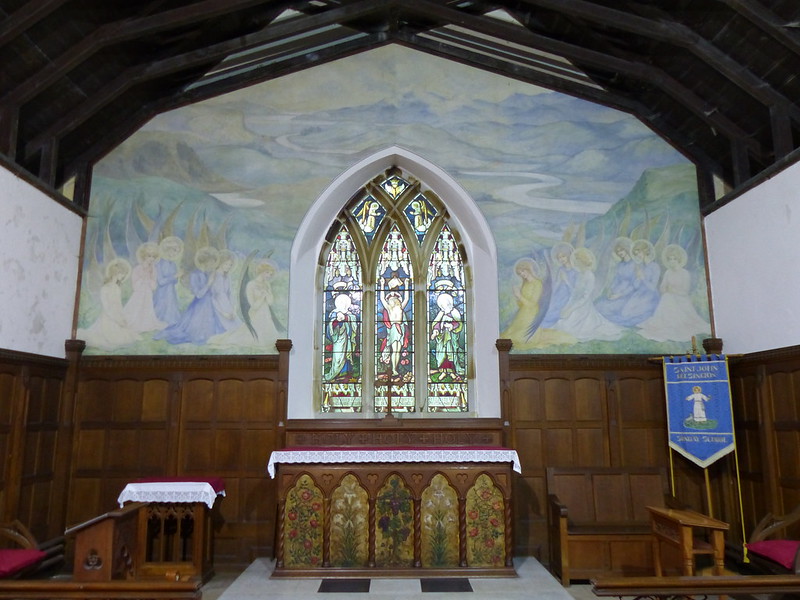 Some details about the church and the mural here.

The long walk along the scar, gradually heading down towards the village of Levens was very enjoyable, if increasingly gloomy. Much as I enjoyed it, I don’t seem to have taken anymore photos. The anticipated rain finally arrived as I walked through Levens. I’d originally thought I might get to Milnthorpe or even all the way home, but after the late start and with the light fading and the heavens opening, I decided that discretion was the better part of valour. I managed to leave TBH a message on her phone. Fortuitously, she was just about to leave Staveley when she got the message and arrived to pick me up from a layby near Levens Bridge on the Kent only moments after I arrived there myself. Nice to be the beneficiary of a personal taxi service for a change!

I really enjoyed the walk, in fact I’m still enjoying it in retrospect, and really must engineer some more opportunities to walk A to B, or better yet, A to B, B to C, C to D etc over several days…Now there’s a thought! 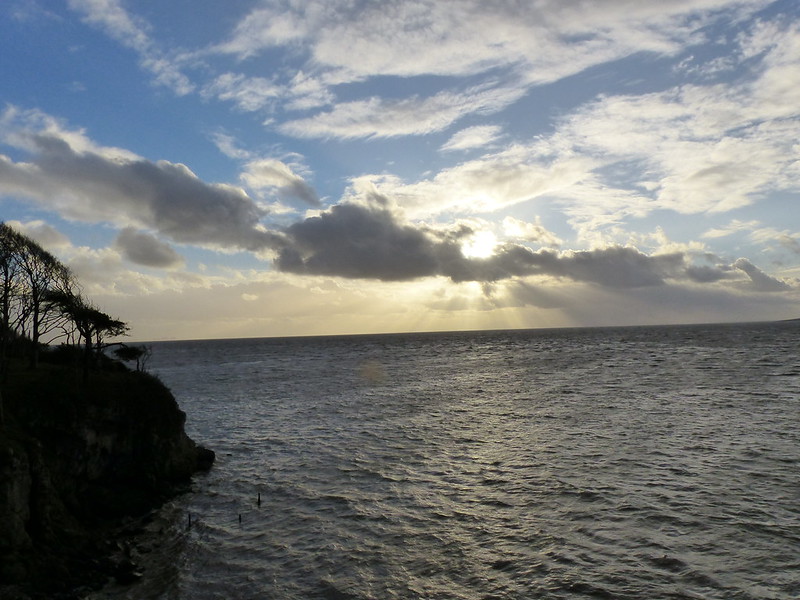 Two local walks in fact. The first from the end of January. 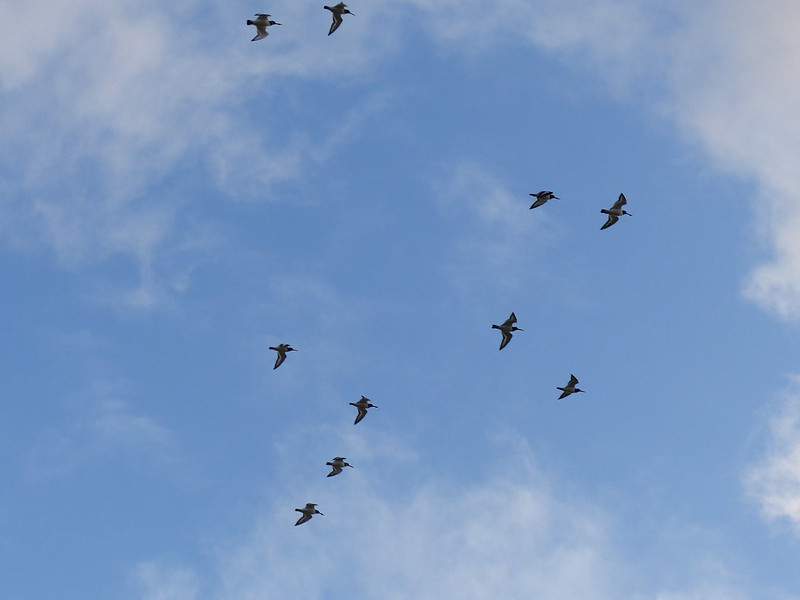 Not far. Just to The Cove with my Mum and Dad… 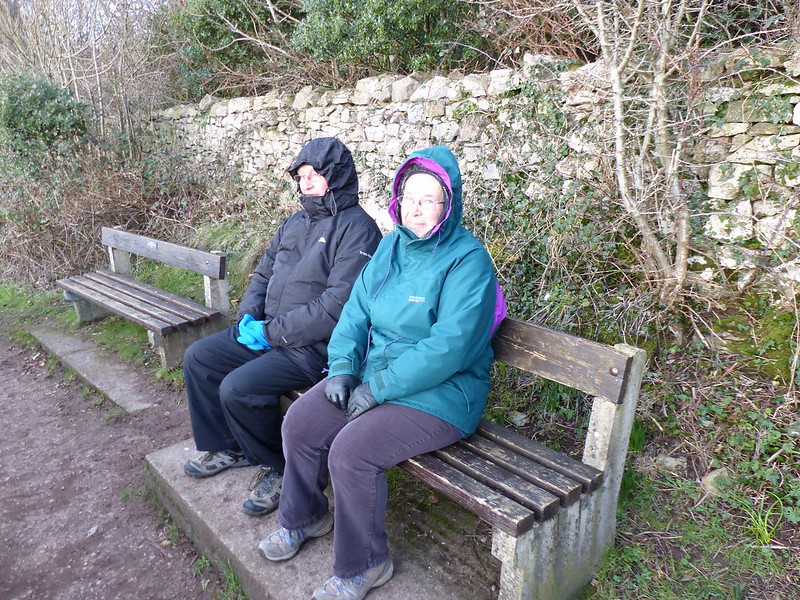 The second, mid February, began as a den building session in Eaves Wood. 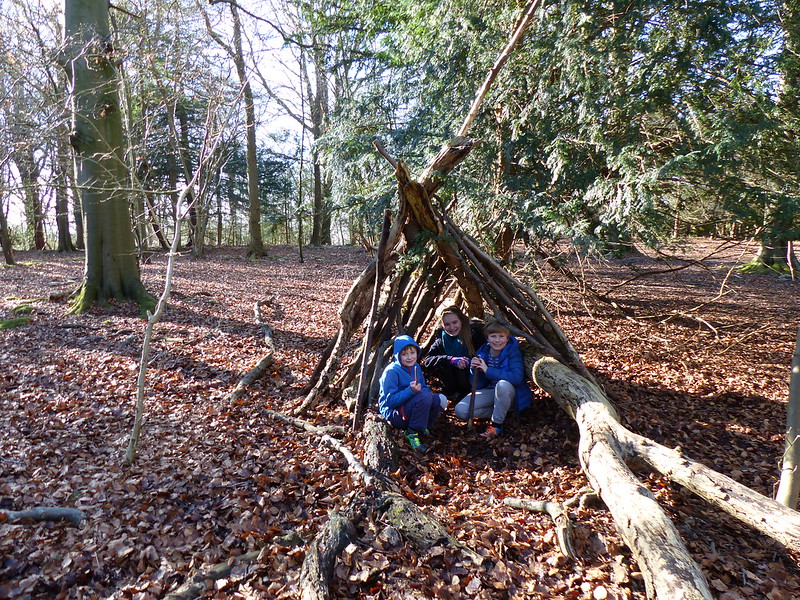 I had a stove with me, and A Hero of Our Time by Mikhail Lermontov, and envisaged a lazy morning loafing in the leaf litter reading and drinking tea. But somehow I ended up embroiled in the construction work. 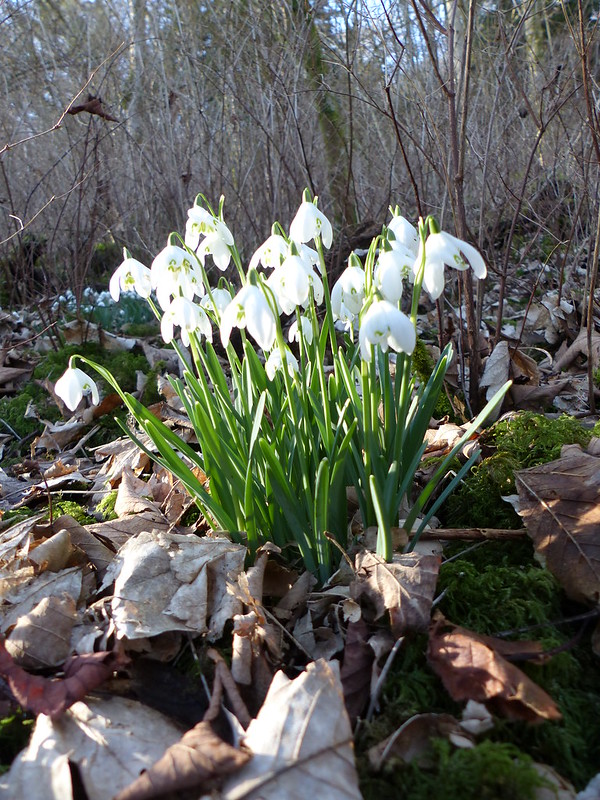 Later, I was out again, this time on my own, on a bit of an seasonal pilgrimage to see the massed snowdrops in the woods near Hawes Water. 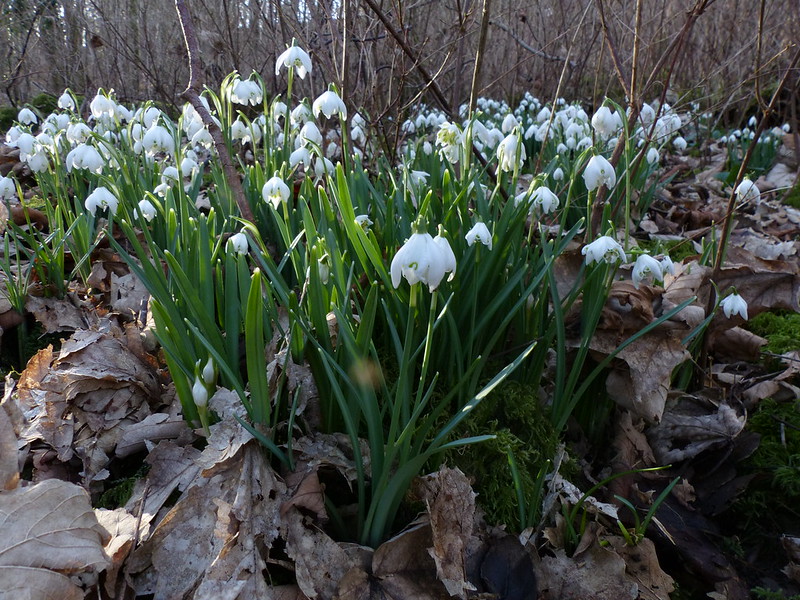 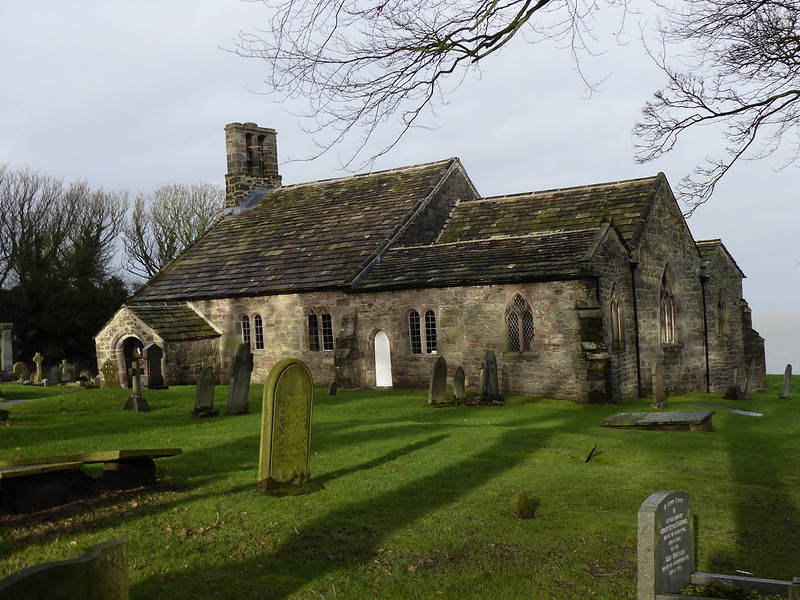 And then…I’m way behind again. This little ramble seems so long ago now. The kids were trampolining, I was at a loose end, but the weather looked promising and the sun was shining on St. Peter’s. (I still haven’t been inside, there seemed to be a wedding on.) 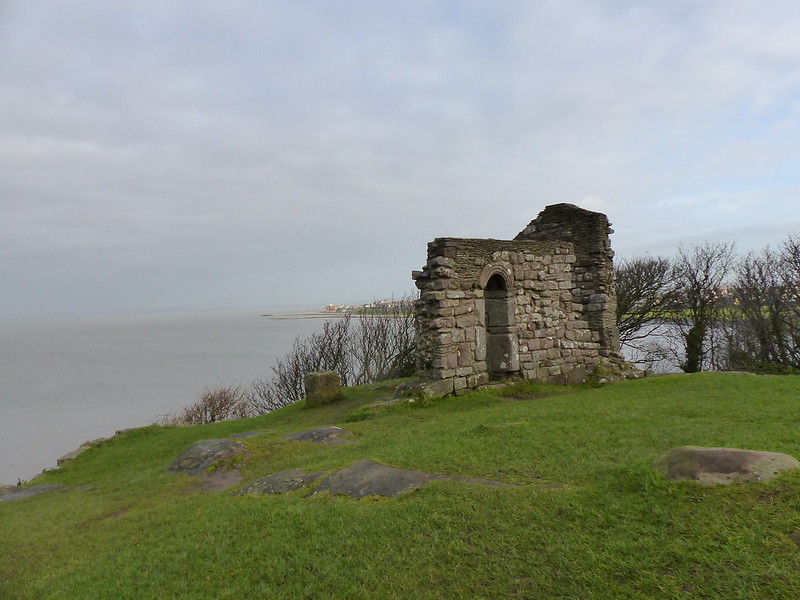 Sadly, the weather rapidly deteriorated, but the Heysham Coast is perfect for a short invigorating stroll. 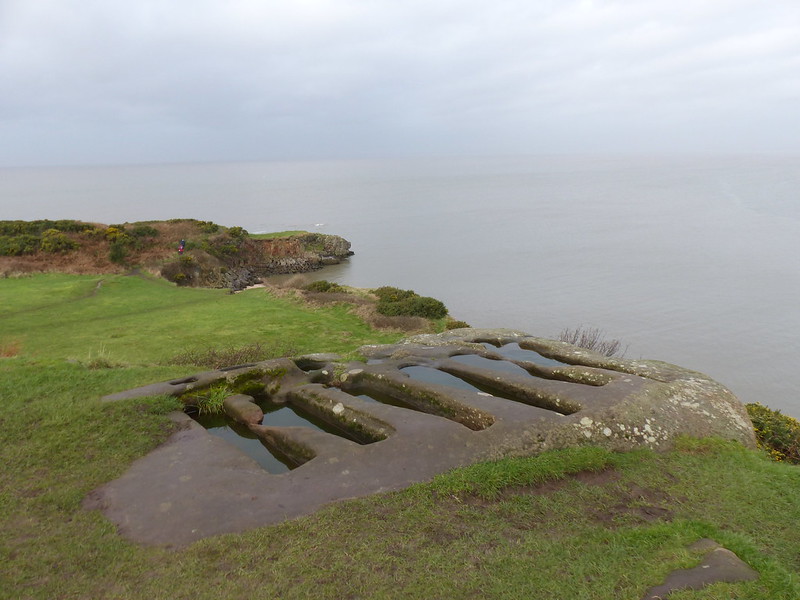 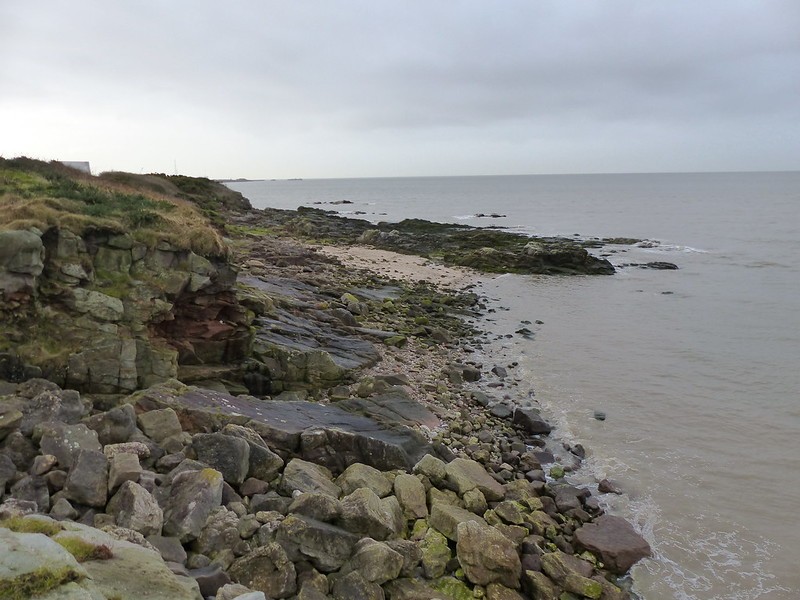 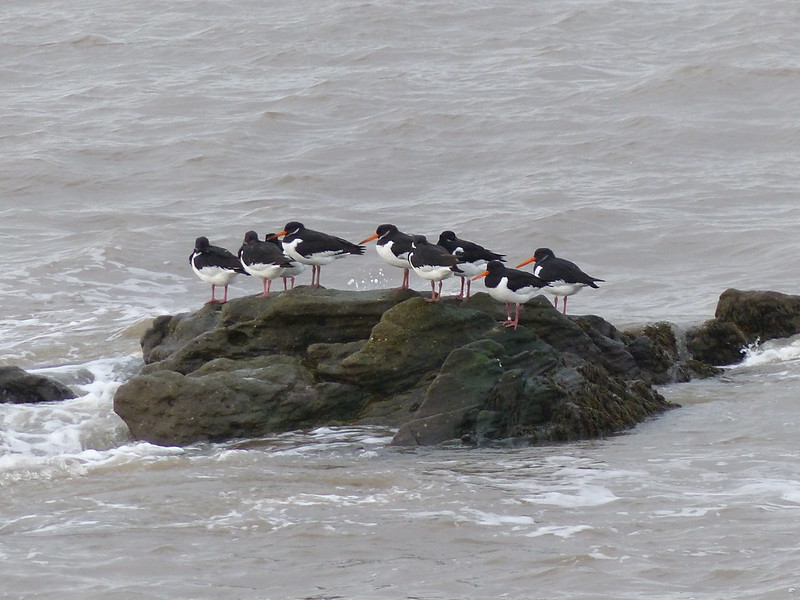 Although the views are somewhat marred… 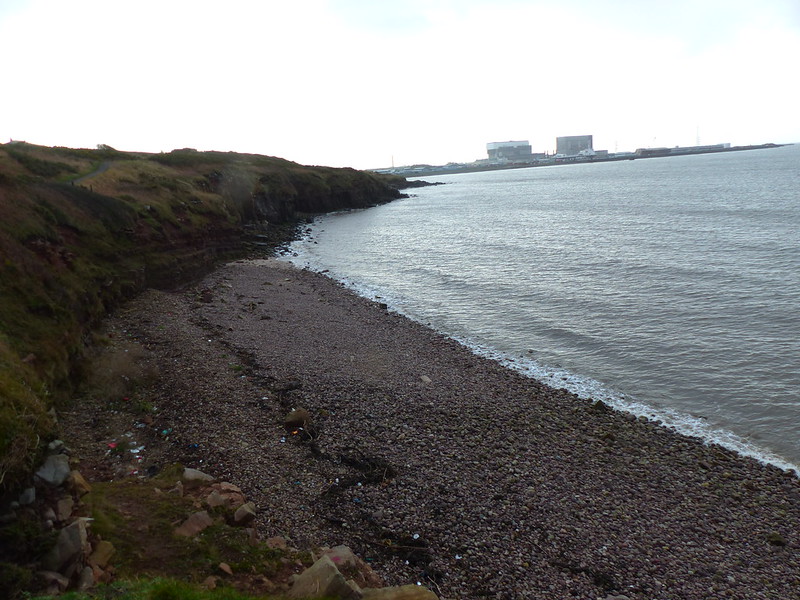 …by the proximity of the nuclear power station and the ferry port. 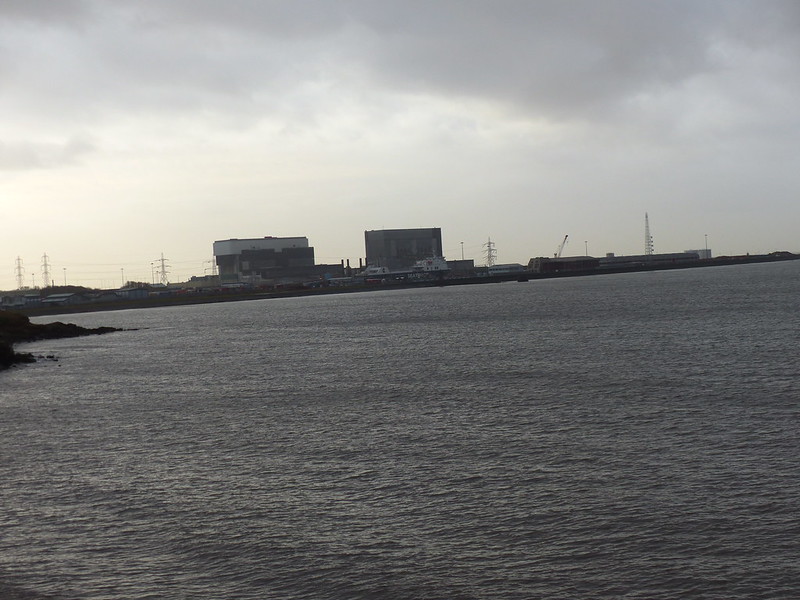 (I can’t seem to do level horizons any more. I wonder…do I stand at a crazy angle without even realising?) 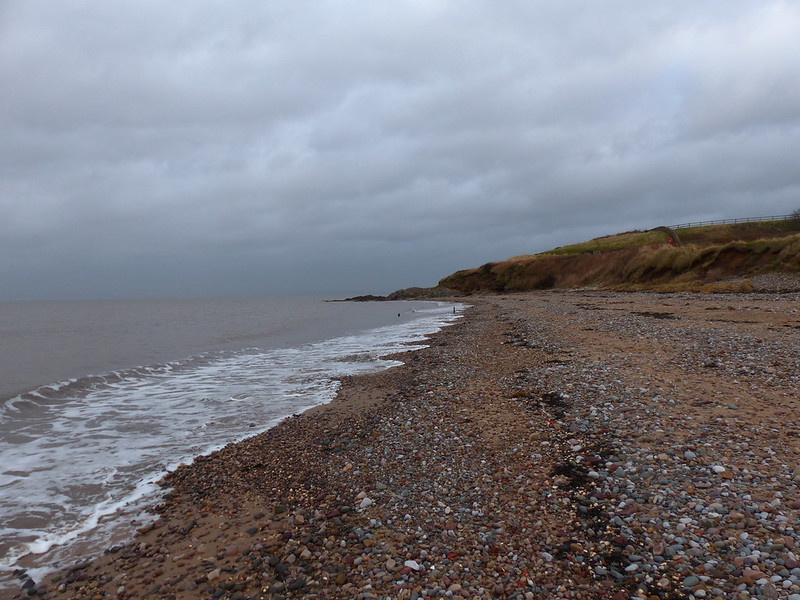 Later the boys and I were out again for another brief wander near home. Lambert’s meadow… 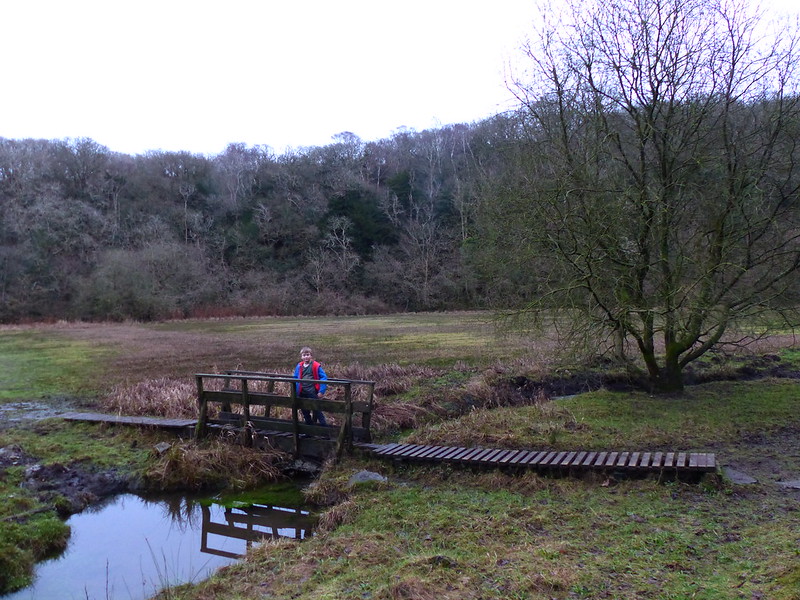 …was back to being a meadow, after weeks spent submerged.

Easter holidays started today, hence some time for me to catch up. After weeks spent submerged.