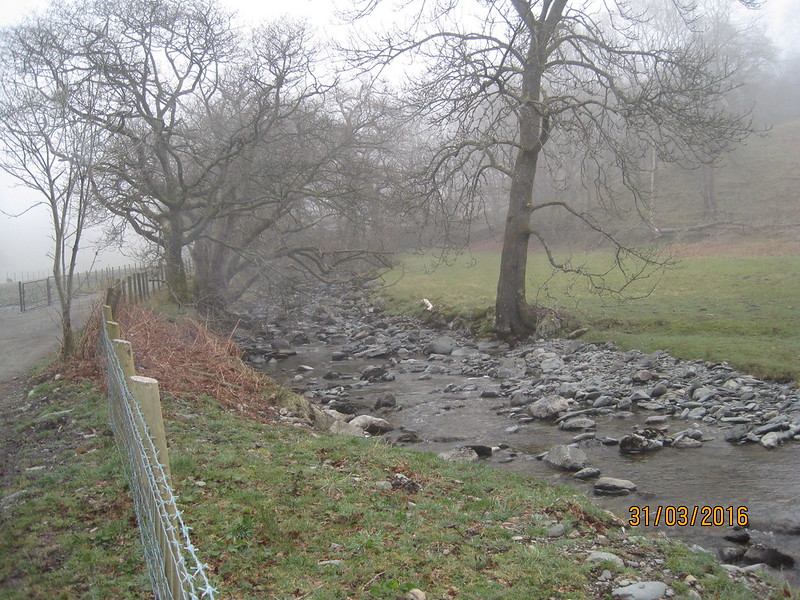 The day of our biggest climb: over Greenup Edge to Borrowdale, and also the day which the long range forecast had predicted would yield the best weather. An early start would have been good then: breakfast at the earliest opportunity was the plan, kitchen starts serving at seven, we got there a minute or two after to find a gazillion students occupying every seat in the dining room and forming a queue snaking all around the room. When we finally made it to the front of said queue we had to wait for baked beans. Wait for baked beans? How complicated can it be to open a tin and warm up some beans?

It started misty. We needed to walk through Ambleside, which was handy anyway because it presented us with an opportunity to stop off at the Chemist’s to buy a tubular support bandage for A’s ankle. I also inquired about the best treatment for blisters and was offered Compeed. As it happens, I had Compeed in my first-aid kit, but have always assumed it was for use to prevent blisters or to cover a burst blister. I tried it on my still full-on blisters, and I have to report that it worked superbly: no more problems with my toes.

Incidentally, I first asked for moleskin: magic stuff which Scholl used to supply. Apparently they’ve discontinued it. I don’t understand, and neither did the Chemist in Ambleside who said that she frequently has people coming into the shop to ask for it. It’s crazy, like Dyson abandoning vacuum cleaners, or Lea and Perrins deciding not to deal in Worcester Sauce anymore. It’s senseless, like Timothy Taylors giving up on Landlord, or the UK relinquishing it’s steel industry!

Anyway, thus patched up, we walked through the grounds of Rydal Hall to the Hall itself. Throughout the morning A made several resolutions to return to have a more thorough look at the placees we passed. She wanted to have a better look at The Grot… 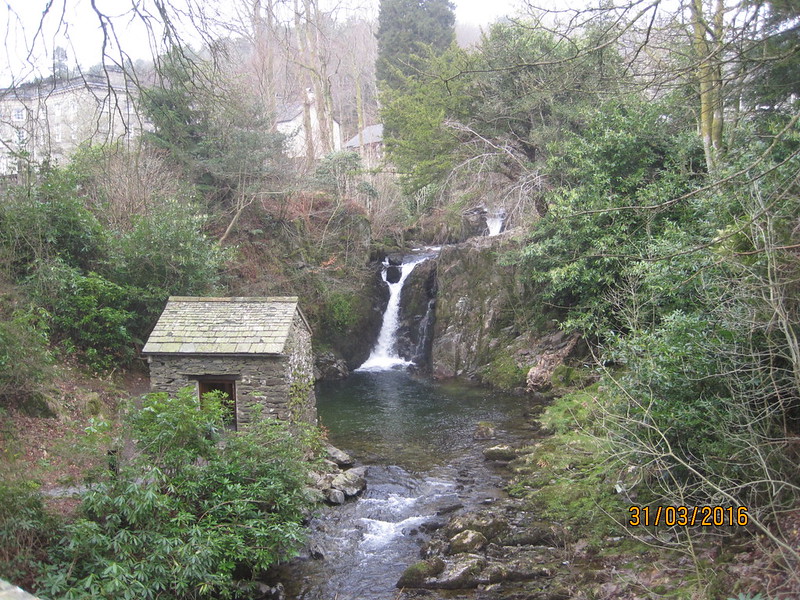 …and at the formal gardens of the hall and the many sculptures on display around the grounds. (Pictures of both from previous visits here and here.)

We didn’t have sufficient time on this occasion, although we did make time to stop at the Old Schoolroom cafe: pot of tea for me, more cake for A.

Later, as we walked the old coffin route between Ambleside and Grasmere, which clings to the hillside above Rydal Water, we would pass both Rydal Mount and Dove Cottage, and A thought they would both be worthy of a return visit. 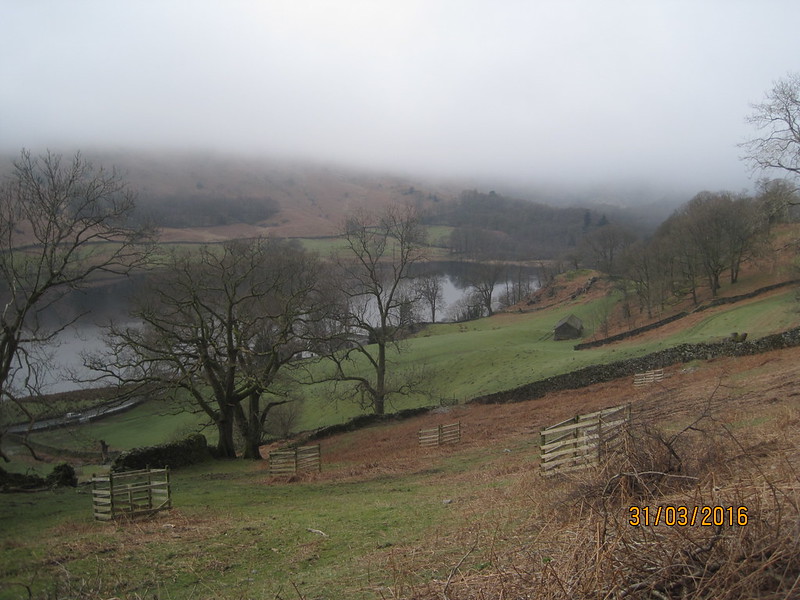 It’s a lovely path this one, and one that I’ve walked many times. (A post about one of those times here.) The low cloud was perhaps a little disappointing, but it was already possible to see that the cloud overhead was beginning to break up and that the sun was trying desperately to shine through. All along this section we repeatedly heard the strange ‘yaffle’ of green woodpeckers, it must be a prime spot for them.

A had our early lunch in Grasmere all planned out: a meal in the Grasmere Tea Gardens where she knew that they had both a goat’s cheese panini and a hot apple and cinnamon drink which she liked. She made a good choice of venue – I had beef and tomato chilli soup, which was my favourite meal of the trip. 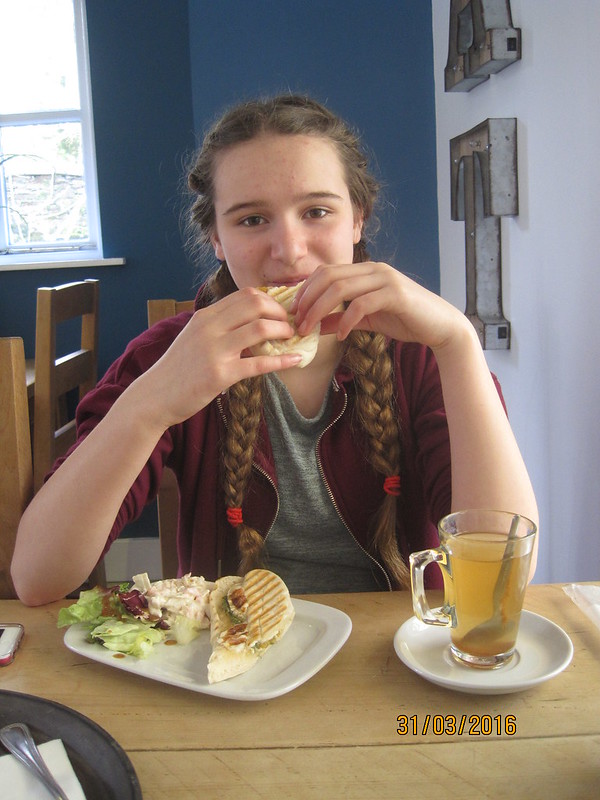 “We are going to the gingerbread shop aren’t we? It’s part of the Grasmere experience you know!”

So into her bag went six slices of gingerbread to keep company with the trail mix and biscuits she had brought from home and the chocolate squares she’d picked up in Booths the day before. Perhaps that’s why her ankles were playing up – the two stone of sugary snacks in her rucksack?

Whilst we were searching from Grasmere’s Chemist, intending to buy A a more supportive support bandage, we bumped into two friends from home sunning themselves at tables outside another one of Grasmere’s many cafes.

The cloud had lifted – perfect timing for our long climb. 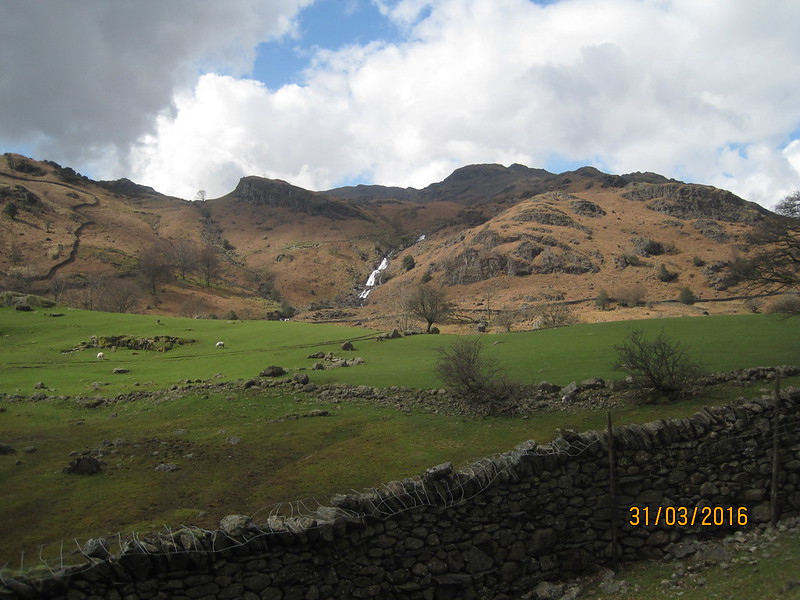 It was as we started to climb, I think, that A realised the tactical error she had made, and set about trying to lighten her load by consuming huge quantities of cake.

“This looks like a nice place to stop for a drink.” 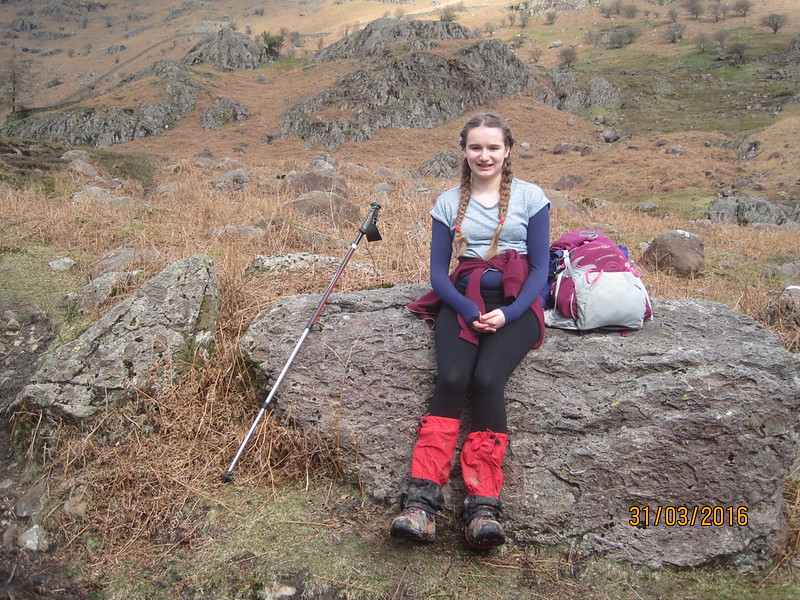 And then, ten minutes later:

“This looks like a nice place to stop for a drink.”

This would never do! We had to agree a compromise – half an hour of walking, followed by five (or ten) minutes of sitting, taking on fluids and trying to make inroads into a mountain of cake. 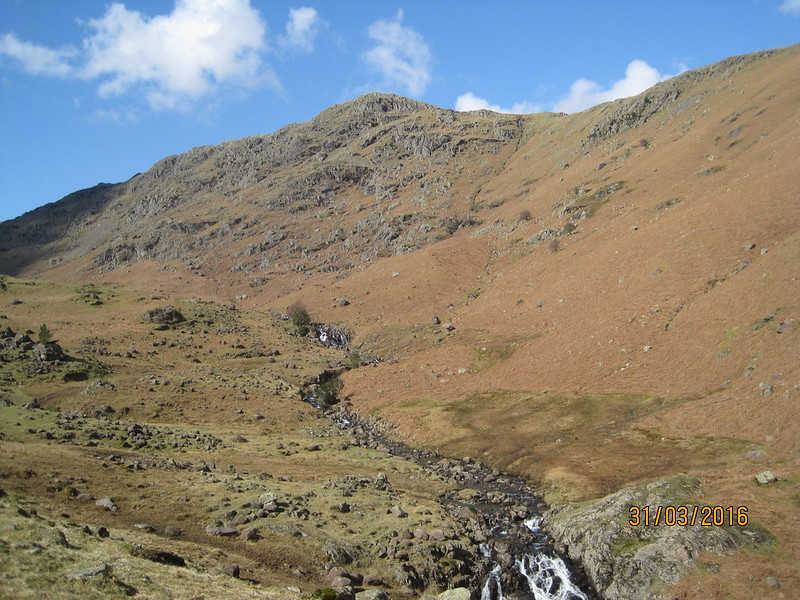 It’s a long climb up Far Easedale, but the sun shone and the views kept changing both ahead and behind. And we were never more than half-an-hour away from another rest stop. 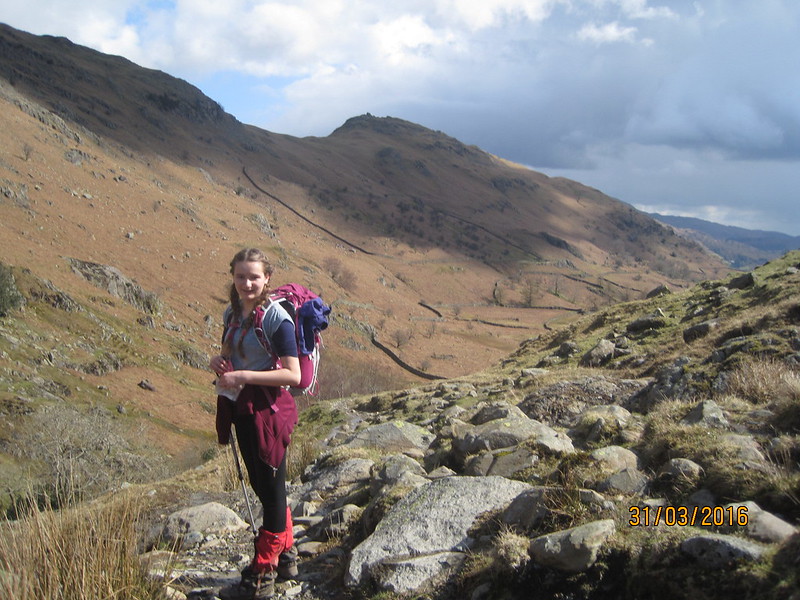 Looking back to Helm Crag. 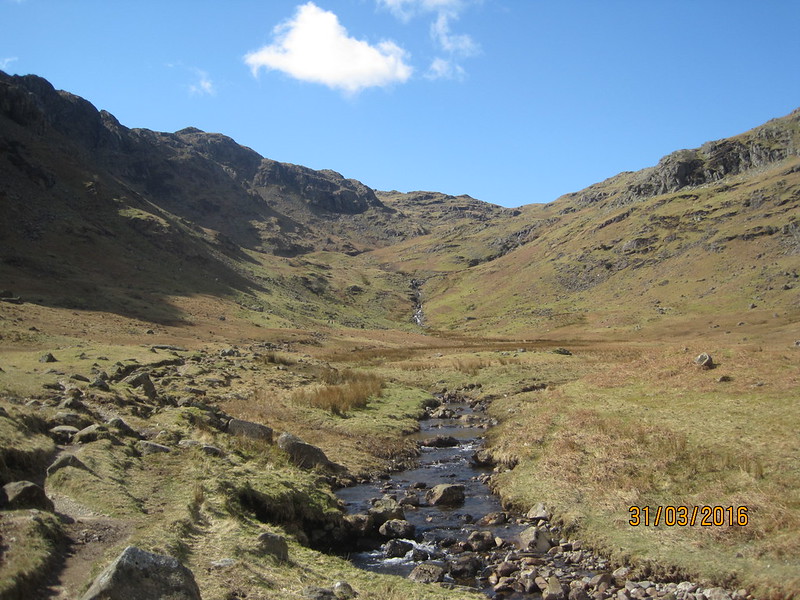 The transition to higher ground was marked by a change of avifauna: wheatears and meadow pipits whirling back and forth in a flurry of spring activity. 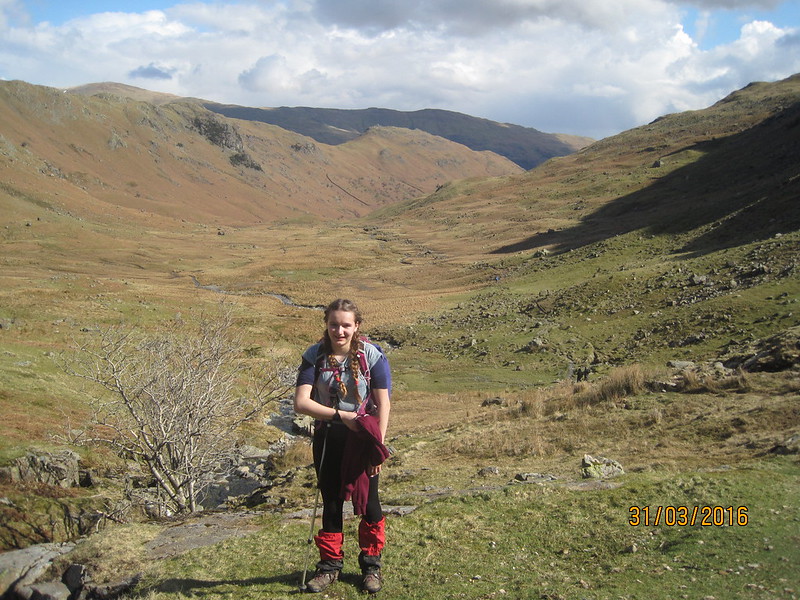 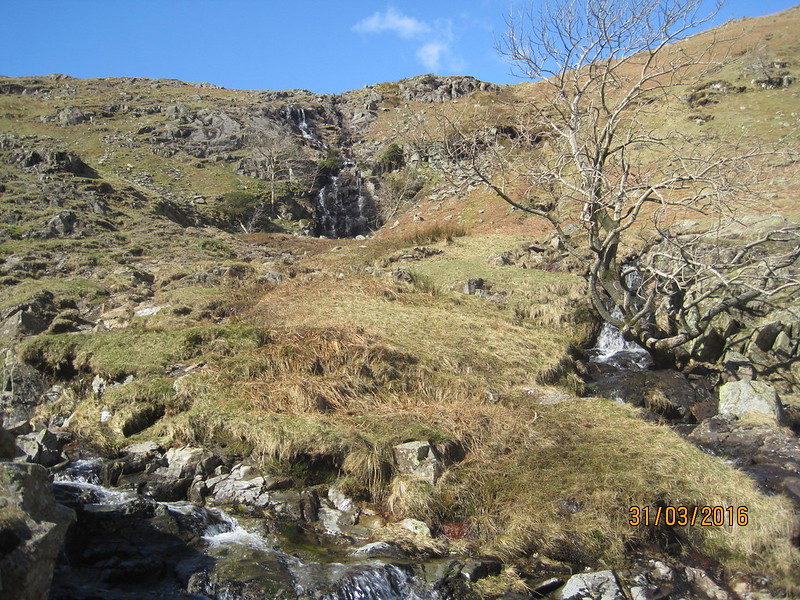 As we climbed we kept leap-frogging a party of five young lads (about A’s age I would guess) who were out on their own. Quite an adventure for them! 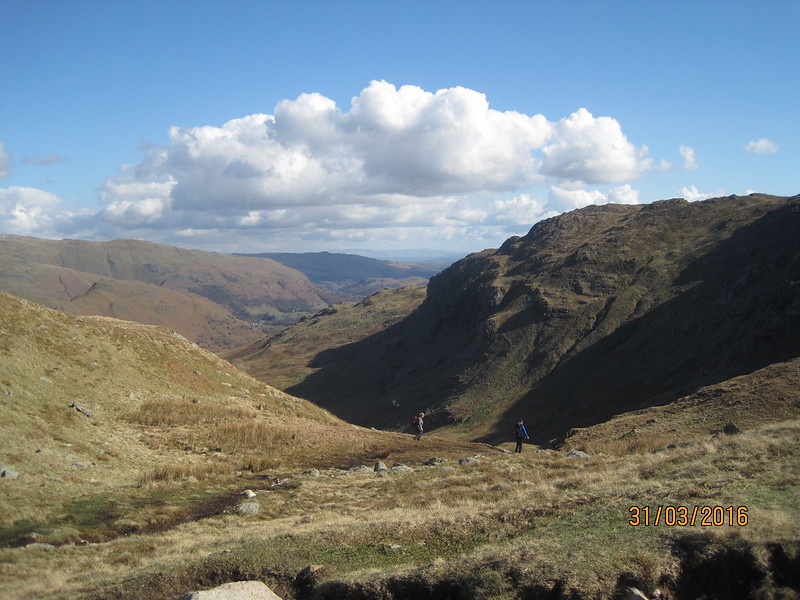 It’s quite an odd ‘pass’ this because you reach what feels like the top, only to find that you have to descend into the boggy hollow of Brownrigg Moss… 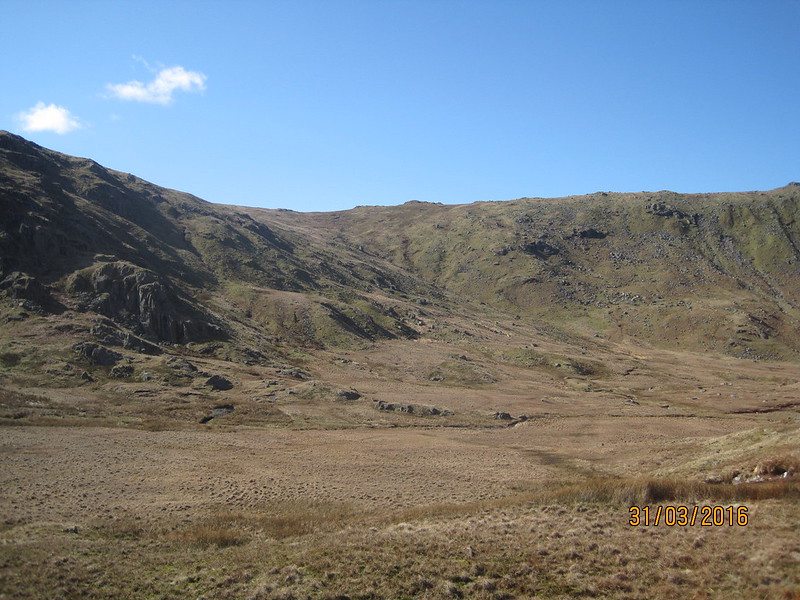 …before climbing again to Greenup Edge itself. 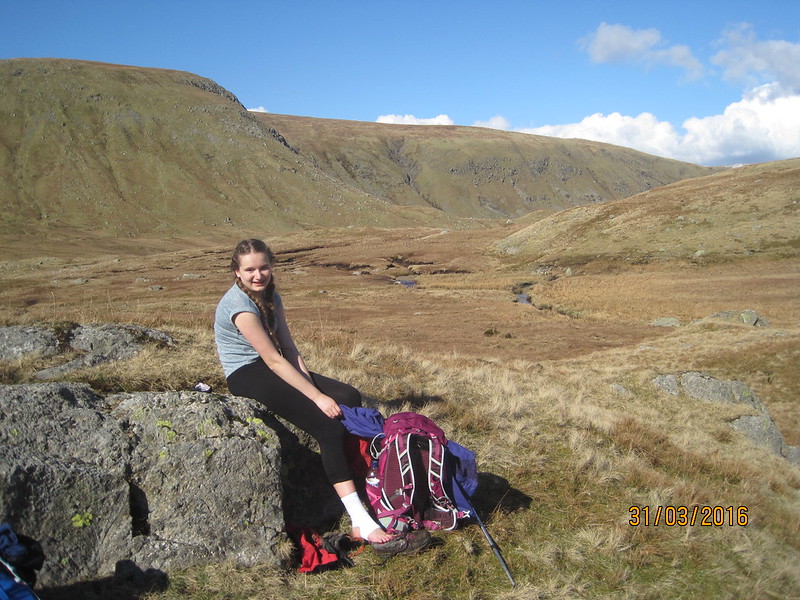 Across some of the worst of the bog, assessing the wet sock situation. 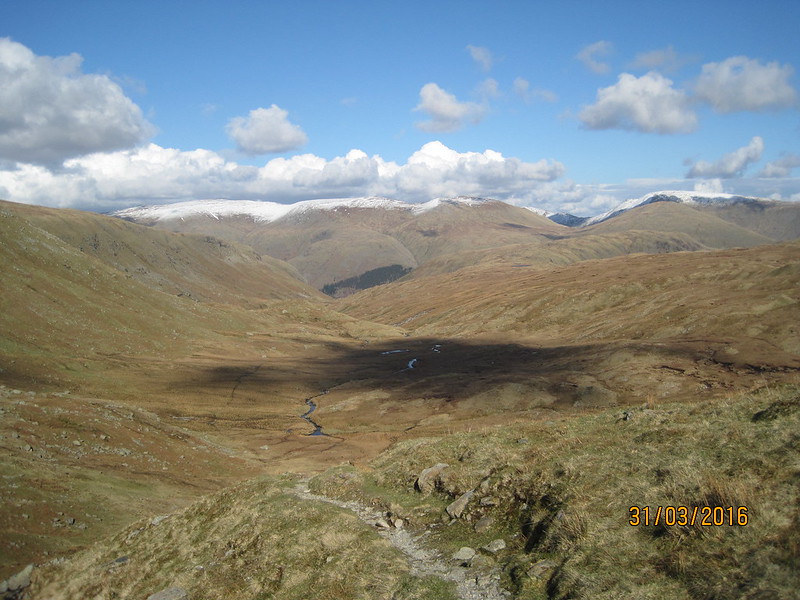 As we heaved ourselves up the last part of the climb, Helvellyn and Fairfield hove into view. 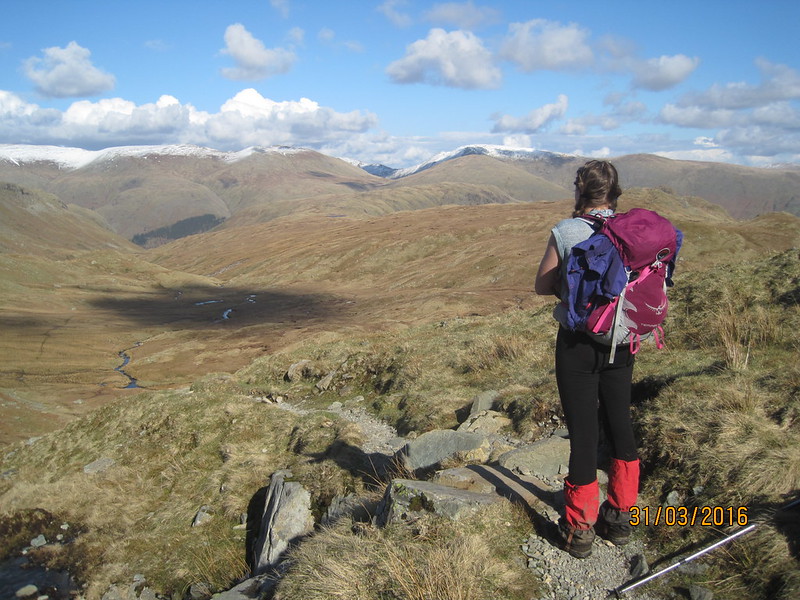 And then, we were on Greenup Edge and a whole new view appeared… 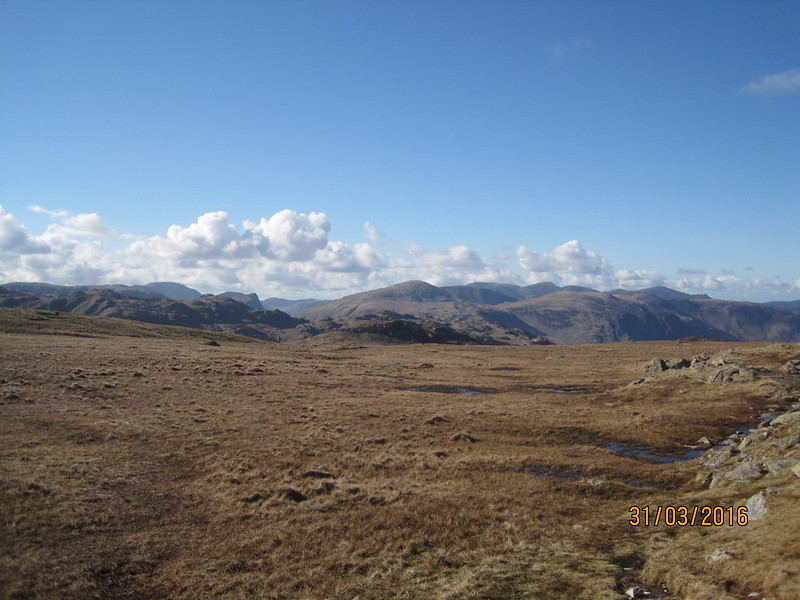 Oddly, a whisper of rain was on the wind, but fortunately, although the few drops seemed to presage something worse, proper rain never materialised.

Greenup Edge is one of the least ‘edge’ like places you could hope to find yourself, and once again we found we had to skirt the deeper, soggier parts of the bog.

Ahead we could pick out Skiddaw… 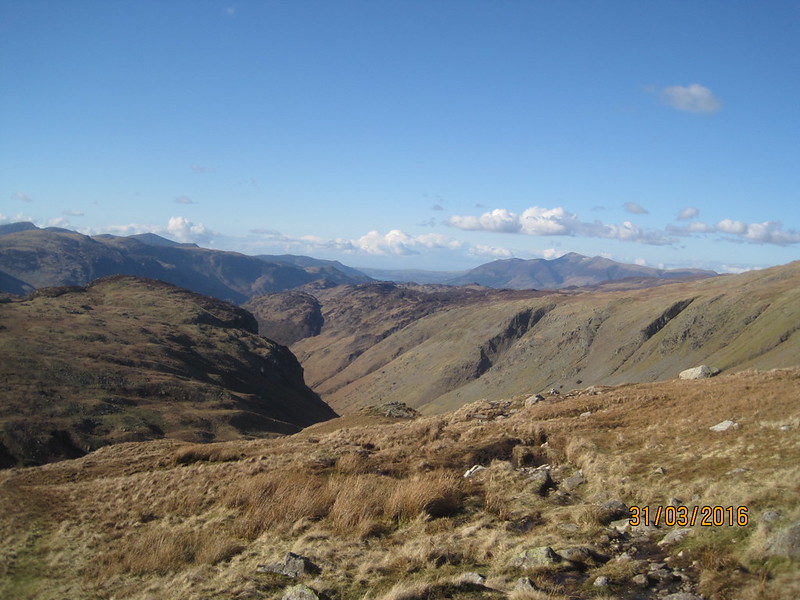 …which, since it is beyond Keswick, our final destination, was a significant landmark for us. 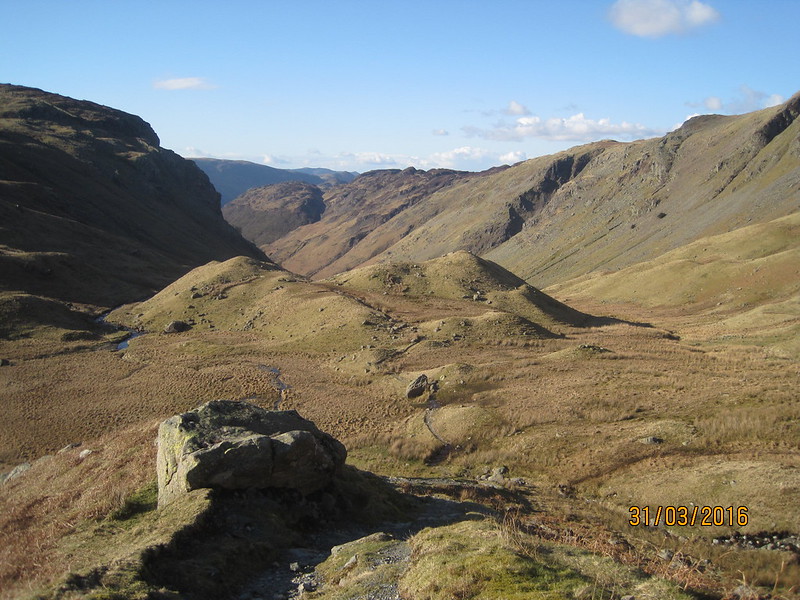 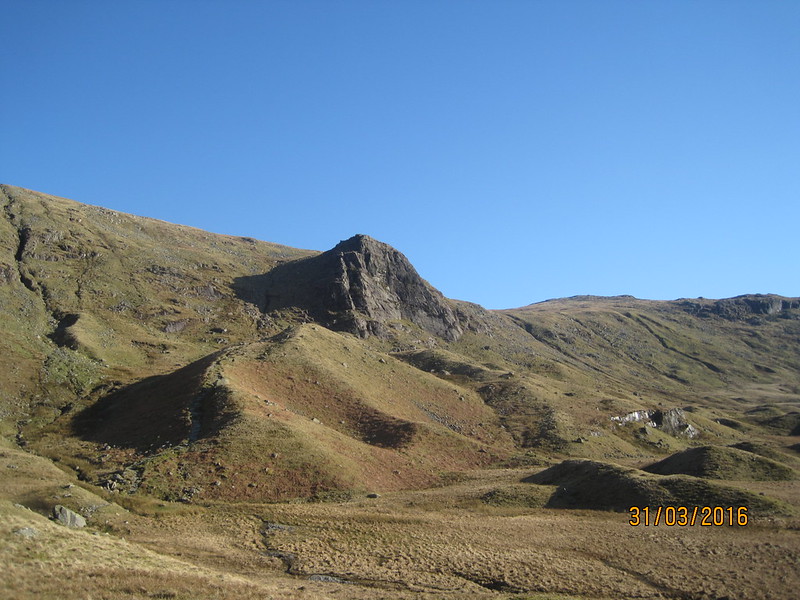 The path drops down beside Lining Crag, which doesn’t seem very significant as you descend, but is impressive when seen from below.

After our long ascent, we now faced an almost equally long descent down into Borrowdale. 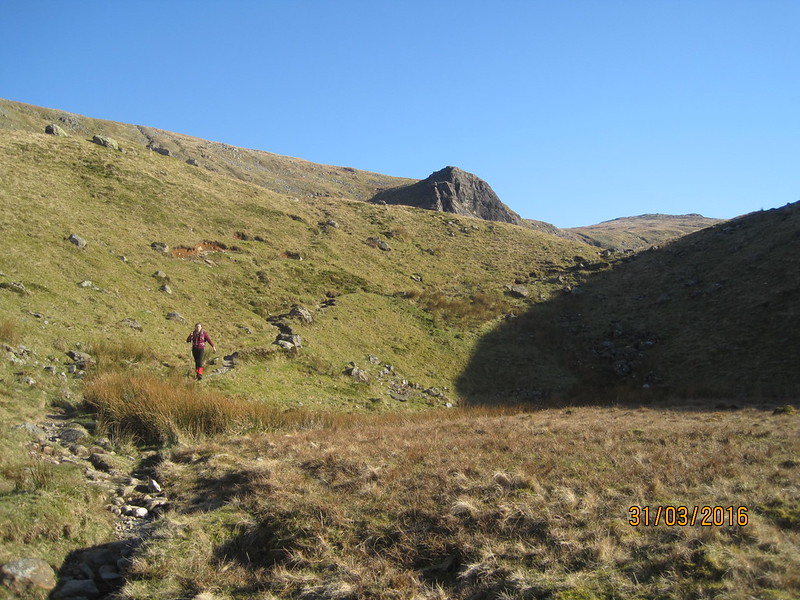 Shadows were lengthening and we were in and out of the sun as we came down the valley. Like Far Easedale Gill, Greenup Gill had lots of waterfalls and small pools which would be worth exploring in the summer (if you enjoy a spot of wild-swimming). 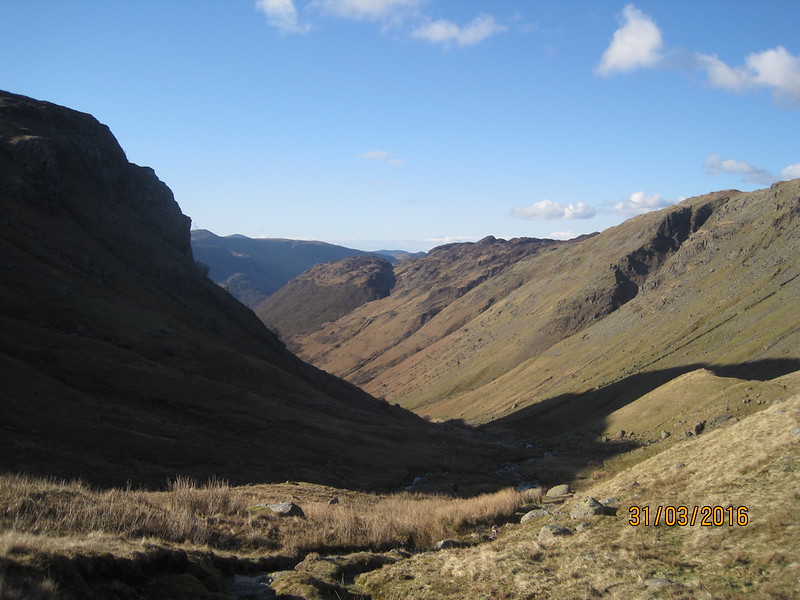 Eventually, as we rounded a bend in the valley, the plush green of Borrowdale itself appeared ahead… 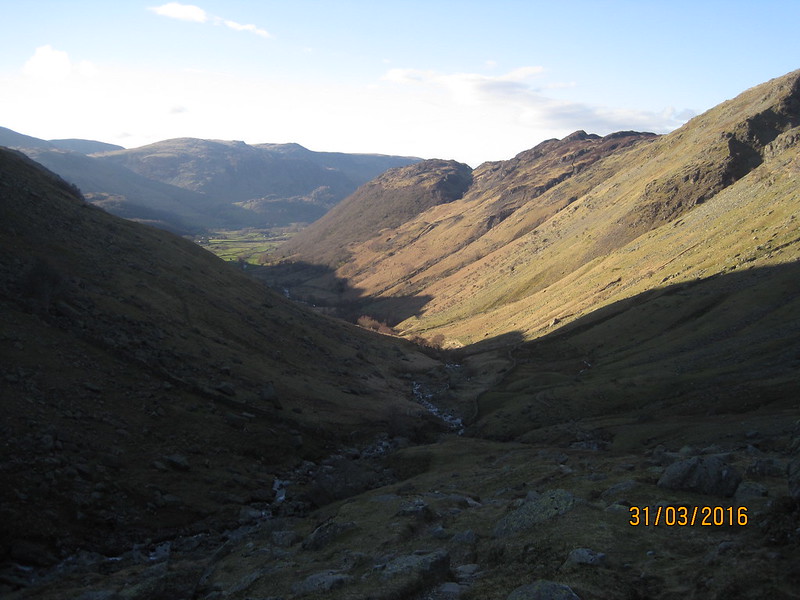 We’d long been sharing ‘my’ new poles, now, with both of her ankles bothering her, A borrowed both of them. 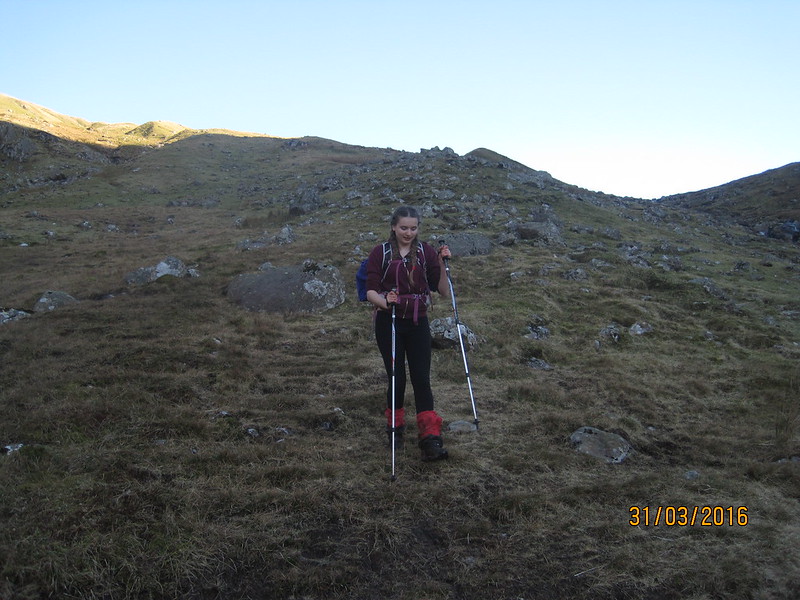 Throughout our walk we saw numerous signs of the destruction wrought by this winter’s floods, saddest of all the many empty homes waiting for renovation which we passed. The new fence, bordering the path which can be seen in the photograph below… 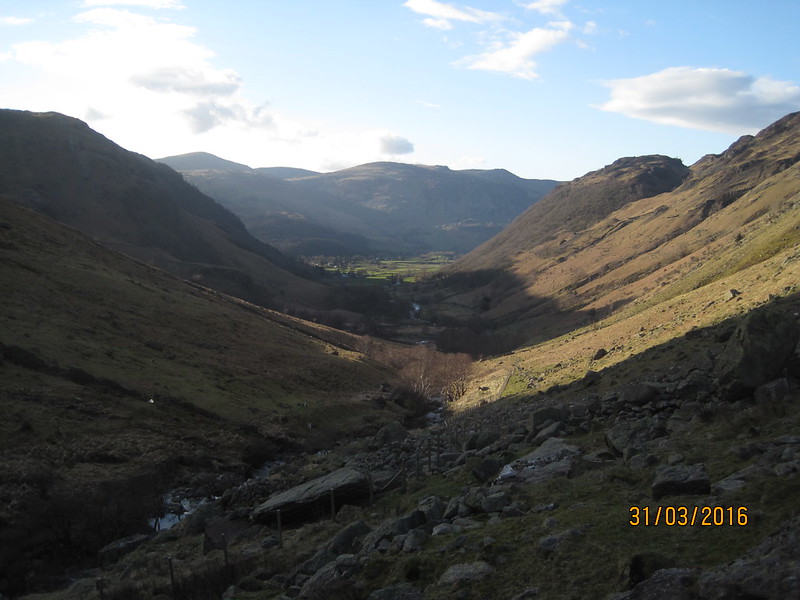 …had been completely wiped out for long stretches. In one spot in particular, there was a small trickle of a stream, a tributary to Greenup Gill, which had yards of bare soil either side of it, where presumably the top-soil had been washed away. Where that tiny stream met the fence, the fence had been buried beneath huge boulders. 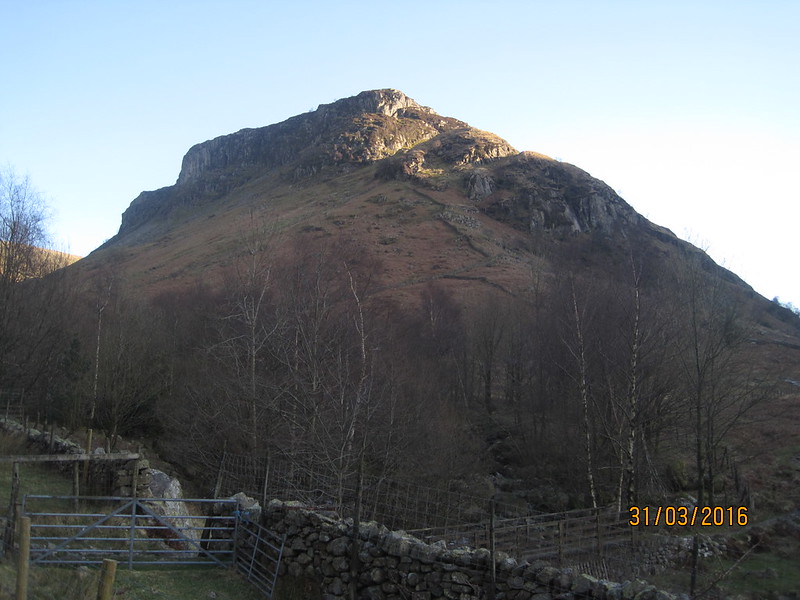 Eagle Crag (I think) catching the last of the sun.

Once again we were cutting it fine at the hostel. We arrived at twenty past seven to find that the kitchen would be closing in ten minutes. However, it was agreed that we could place our order immediately and return at a quarter to eight. The meal was excellent, we both had samosas to start and then Cumberland sausage and mash. The beer was very palatable too. And still time for 121-up at cribbage and for A to get her own back by beating me at knock-out whist. 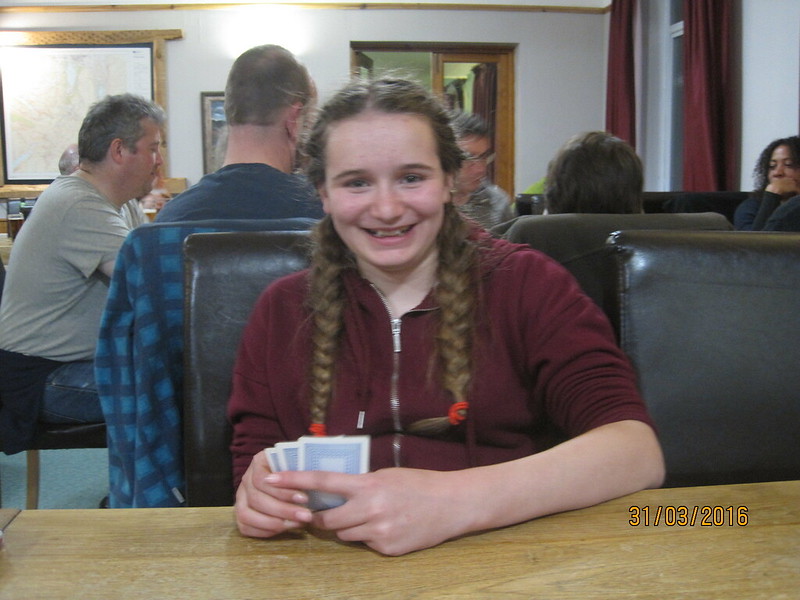 According to A’s ipod the day’s walk worked out at about 14 miles, meaning we’d come 45 in total from home. Just 8 more to go in the morning to meet TBH in Keswick.

Silverdale To Keswick III: to Borrowdale.

7 thoughts on “Silverdale To Keswick III: to Borrowdale.”