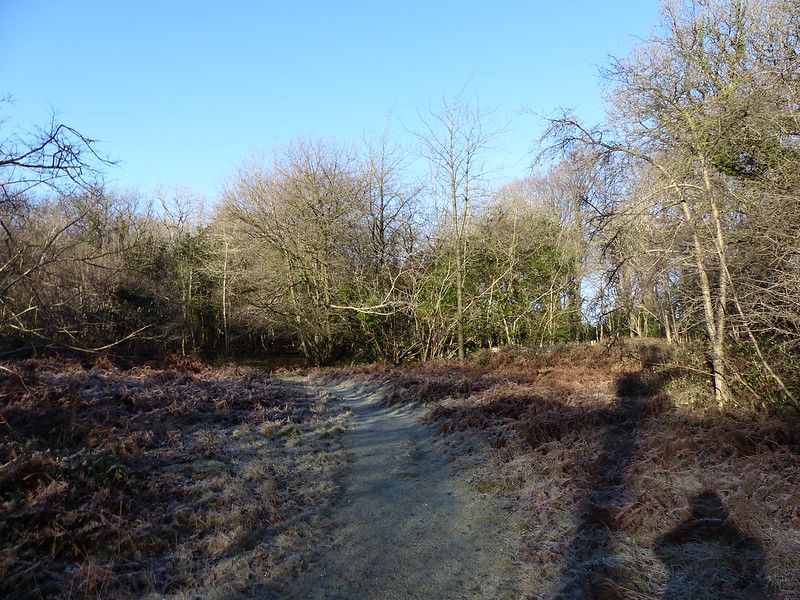 Perhaps the weather on New Year’s Day was a portent of the weather to come after all – at least for the next day anyway, which also dawned frosty, clear and bright. 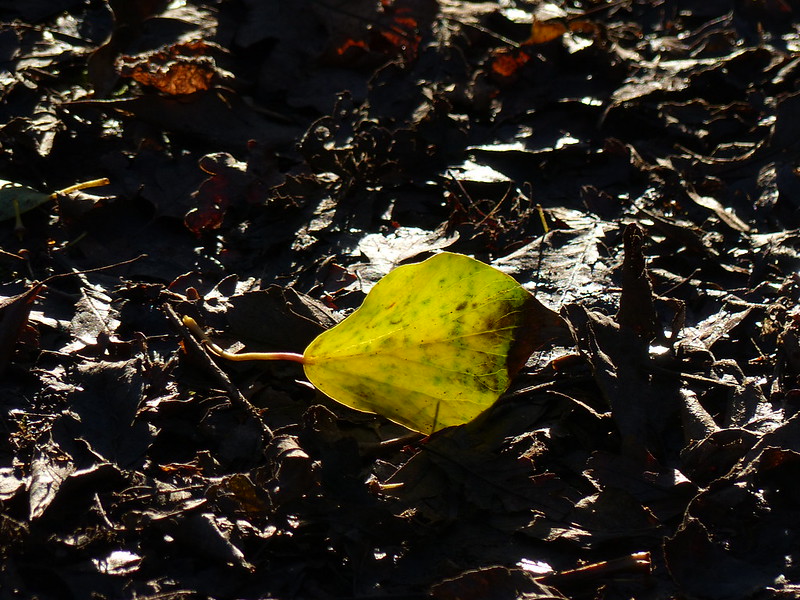 Everywhere I went the trees, bushes and hedgerows were busy with birds, not really singing, but flitting about, jinking from branch to branch and keeping up a constant chatter as they did so. At various points during the walk I tried, and failed, to photograph Nuthatches, Woodpeckers, Great Tits, Blue Tits, Coal Tits, Long-tailed Tits, Blackbirds, Thrushes, Chaffinches, and maybe a solitary Bullfinch. Only Robins can be relied upon to pose, so they will have to stand in for all of the rest. This one… 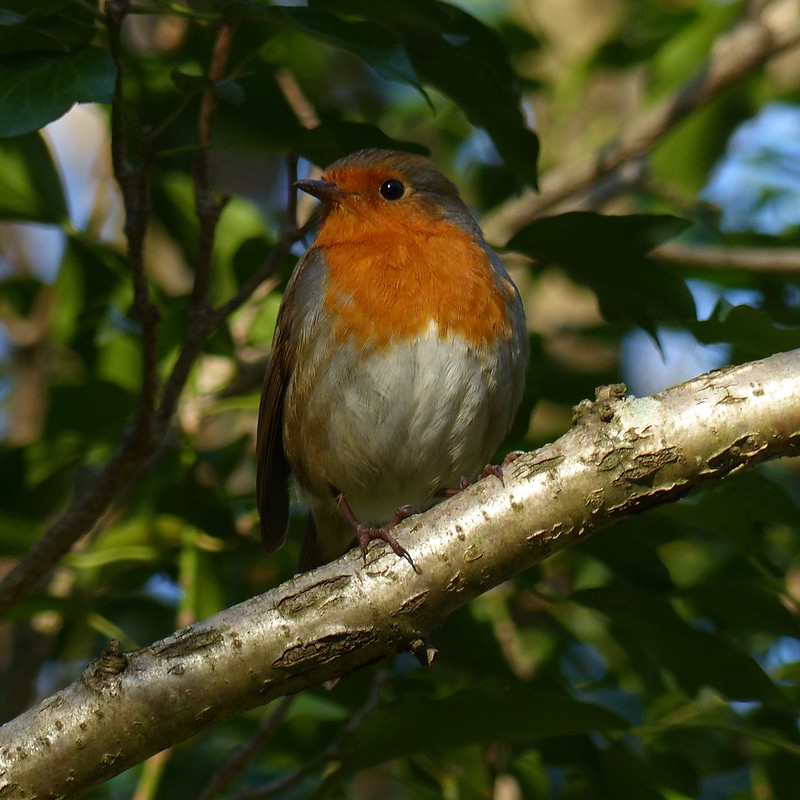 …was on a branch by the path through Fleagarth Wood. 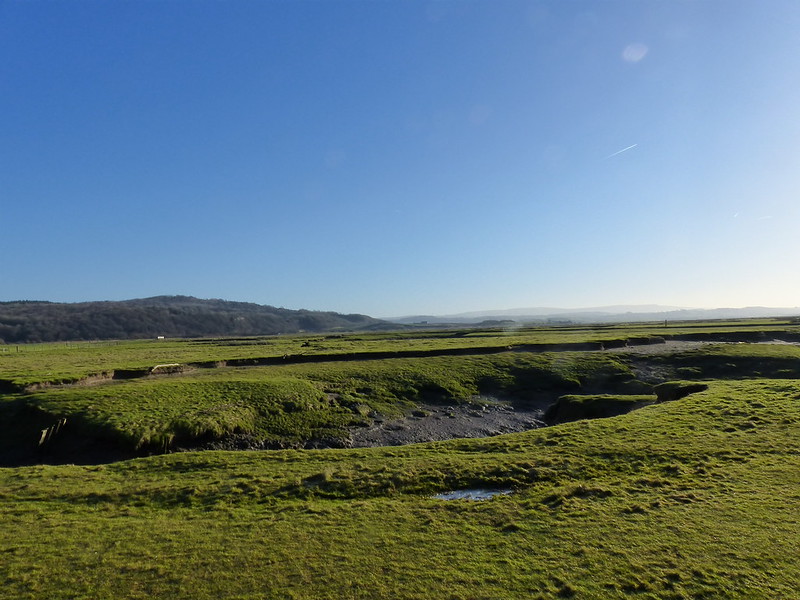 Warton Crag across the salt marsh. 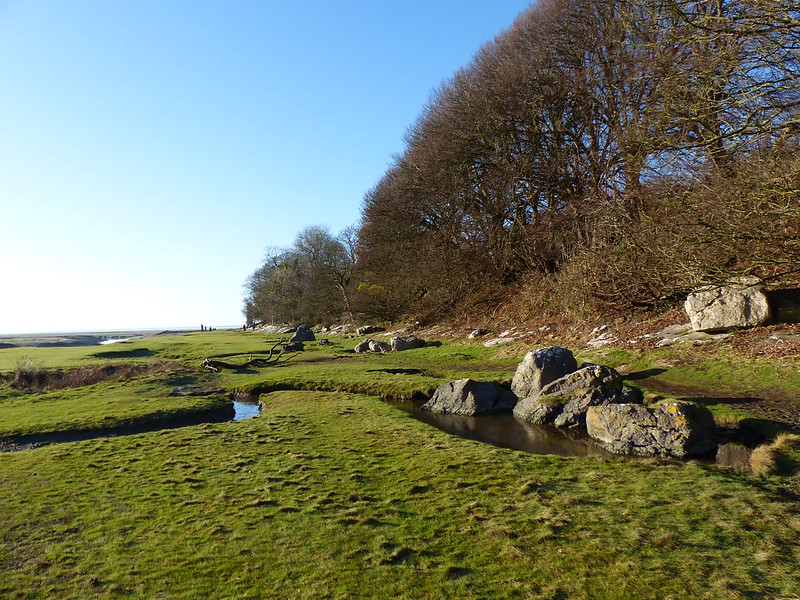 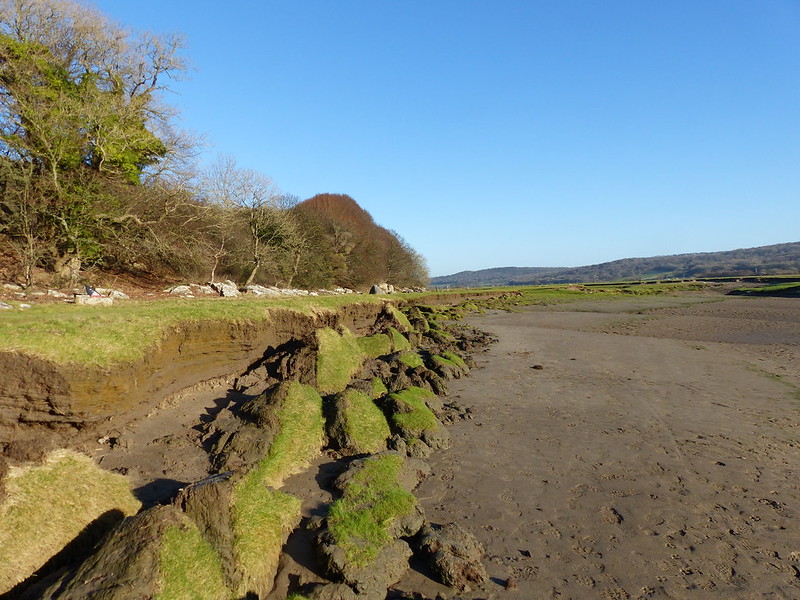 And exposing more remnants of the area’s industrial heritage… 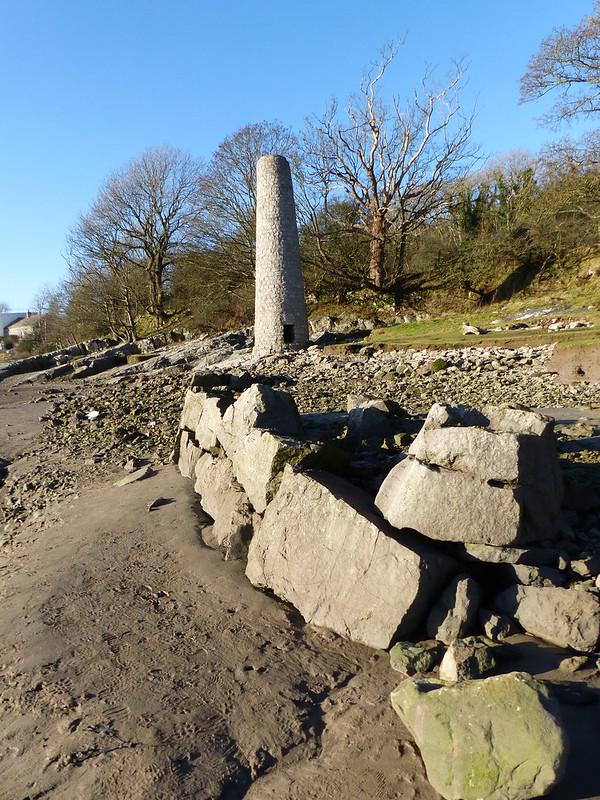 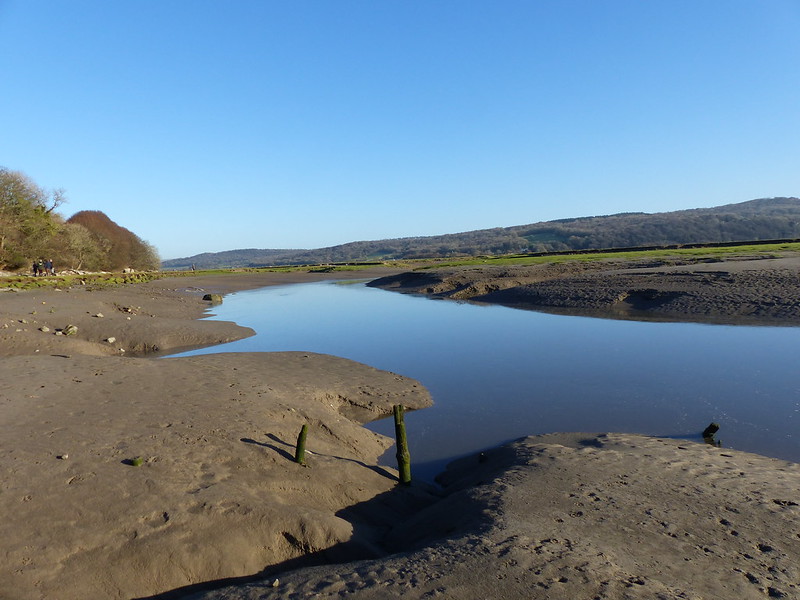 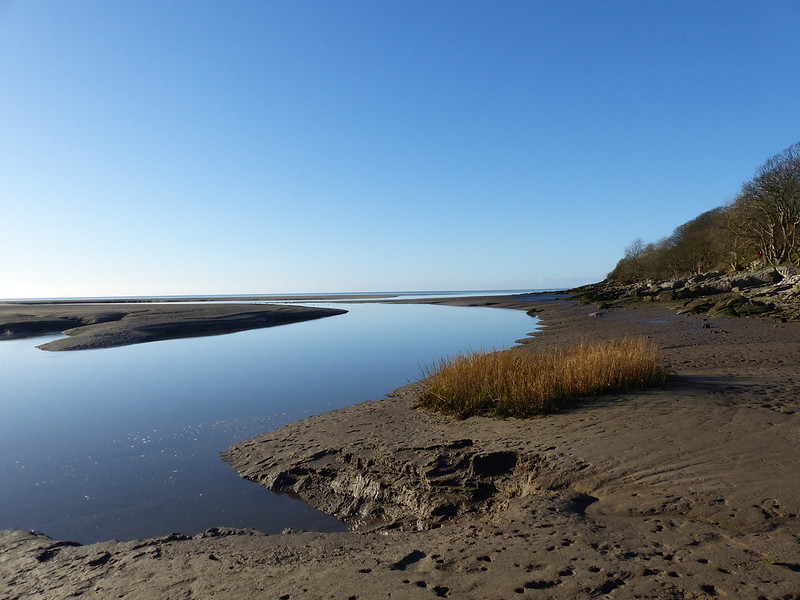 In the field beside the road between Jenny Brown’s Cottages and Jenny Brown’s Point there’s a line of hawthorns. Both the trees and the area around them were busy with Blackbirds. Blackbirds are quite territorial I think, and not always tolerant of each other, but I’ve noticed on the Rowans in our garden that they will happily feed together where there’s an abundant harvest of berries.

In amongst the Blackbirds, there was one paler bird… 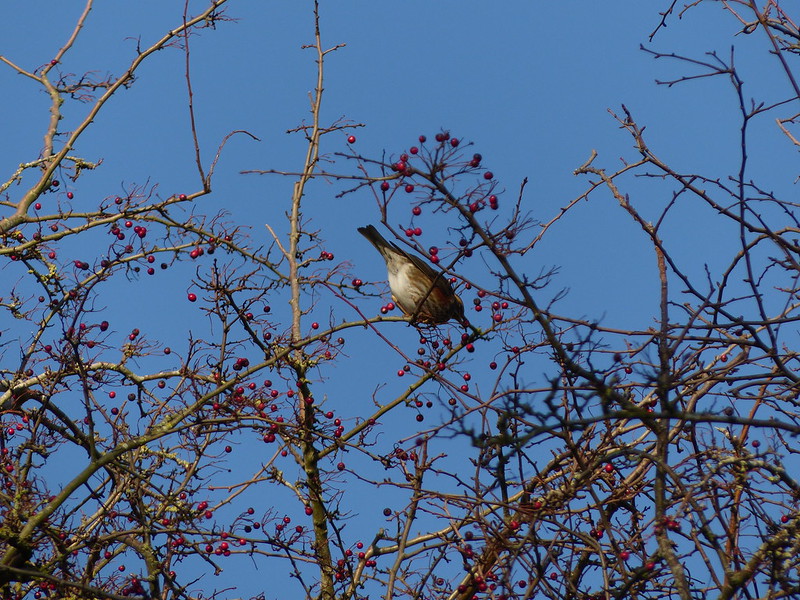 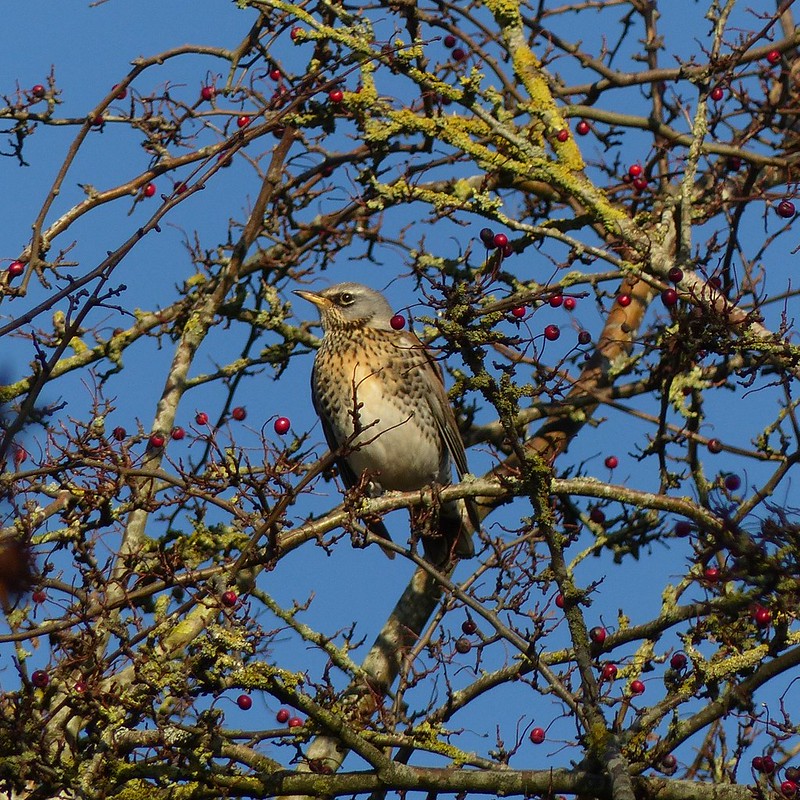 There was another Fieldfare being very elusive on the other side of the road, but I was surprised not to see still more since they seem to be a very gregarious bird. 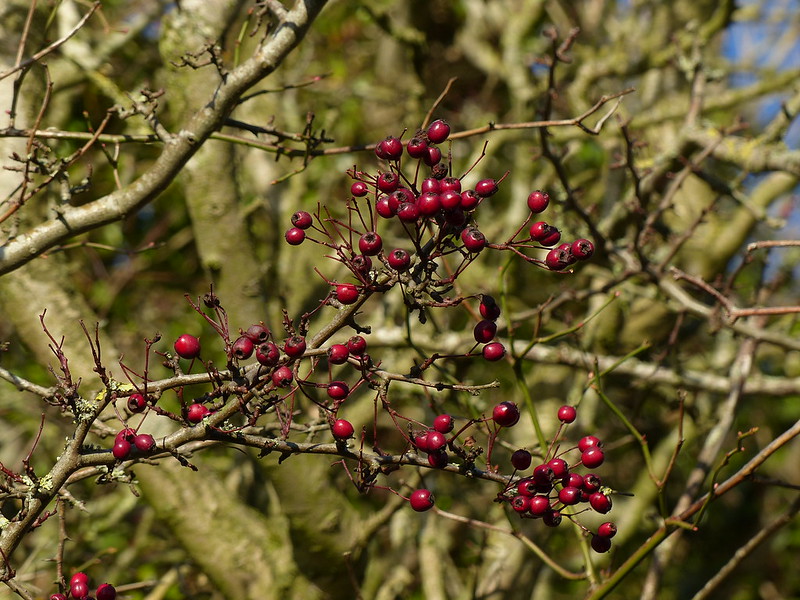 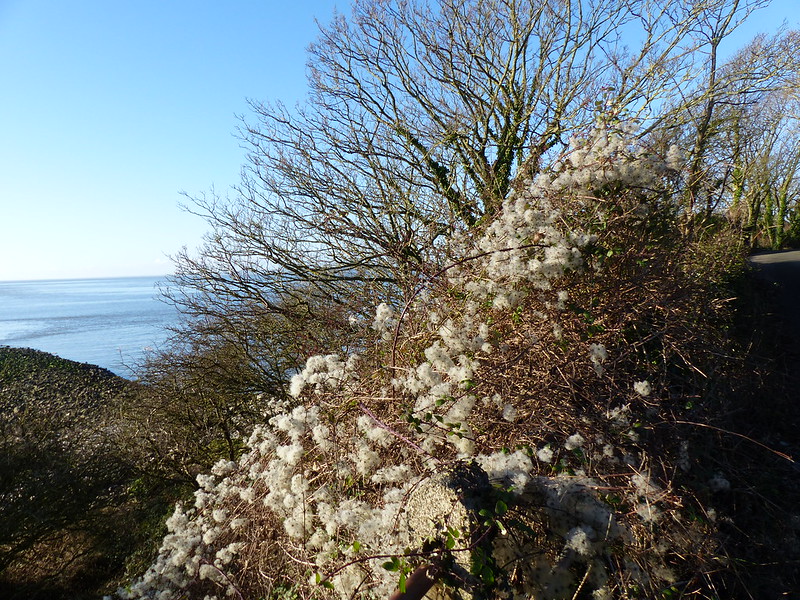 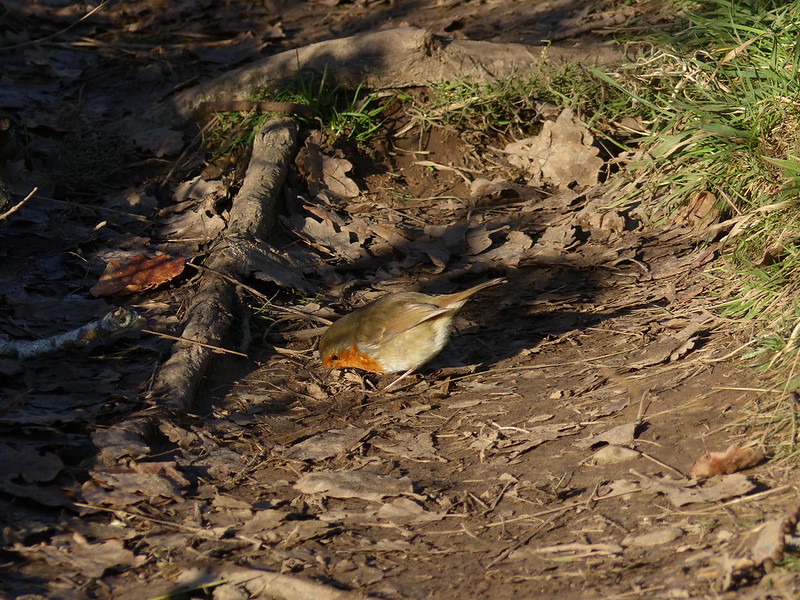 …hopped along in front of me on the path into Jack Scout. I’ve been back to Jack Scout twice today and exactly the same thing happened both times. Presumably, that was the same Robin each time. What advantage can be gained by such strange behaviour I wonder? 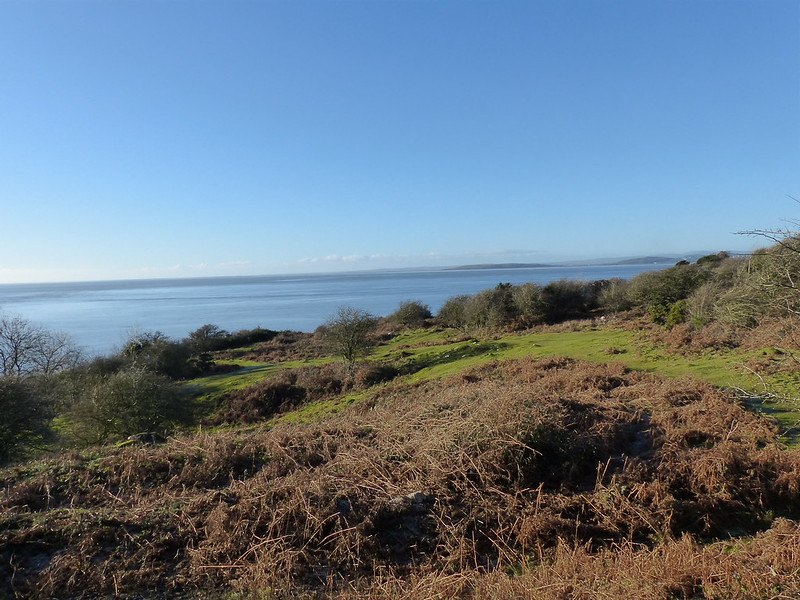 At Woodwell I stopped to answer a call of nature and a Robin landed on a fence post right behind me. 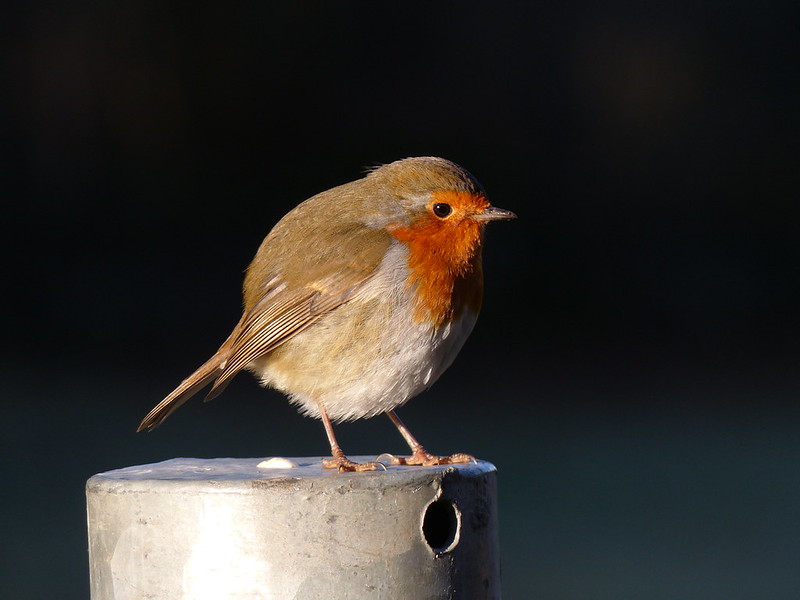 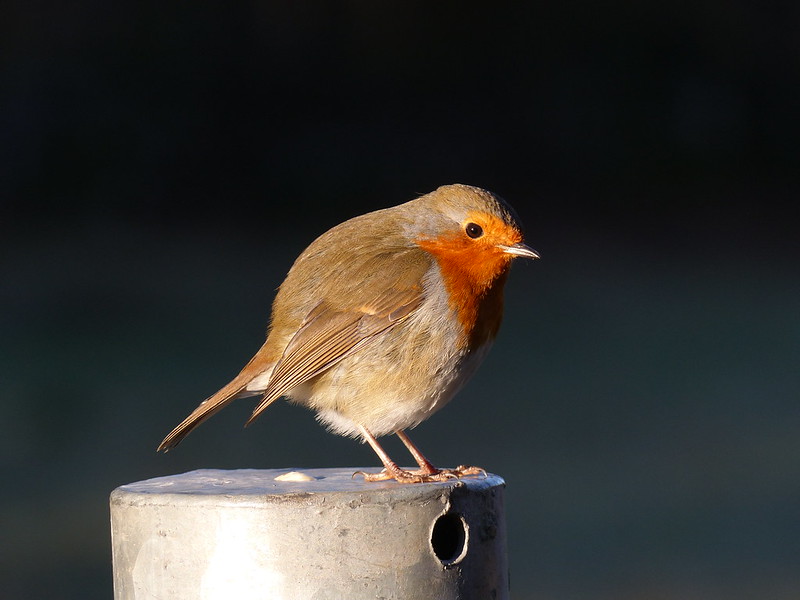 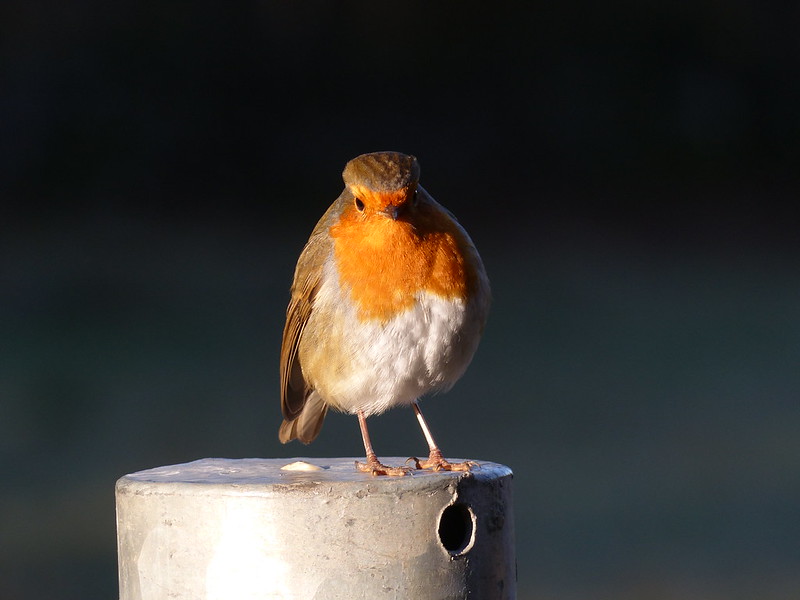 What chance flowers in January? 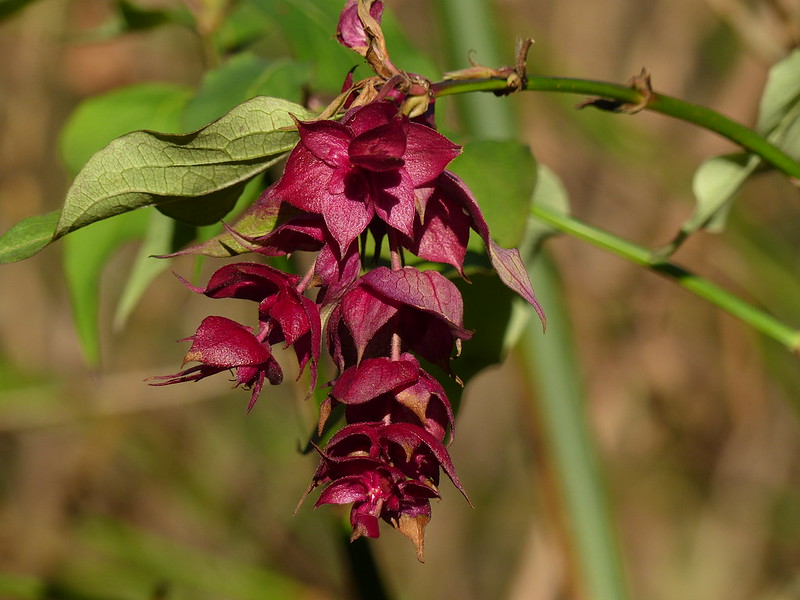 Actually, I think that, strictly speaking, these aren’t flowers. The flowers will have been small and white and cradled by these bracts, followed by small, dark berries. 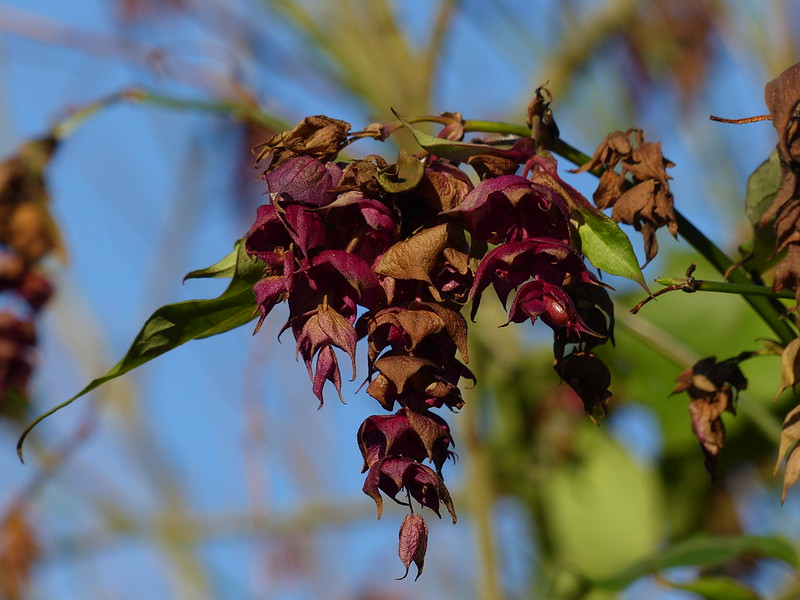 I’ve always known this plant as Flowering Nutmeg. Apparently it’s also known as Himalayan Honeysuckle, Pheasant Berry, Himalayan Nutmeg or Chocolate Berry. It’s not an endemic plant, as some of the names suggest. It grows in several places that I know of across the area. I used to have some in my garden when I lived in Arnside. I took cuttings from a plant on a roadside verge, dipped them in rooting powder and stuck them in pots on my windowsill, before transplanting them to the garden. Now that I know that they are good to eat…

“The fully ripened fruit are faintly figgy in flavour with hints of bitter chocolate and burnt caramel.”

Maybe I’ll have another go at taking some cuttings this year. 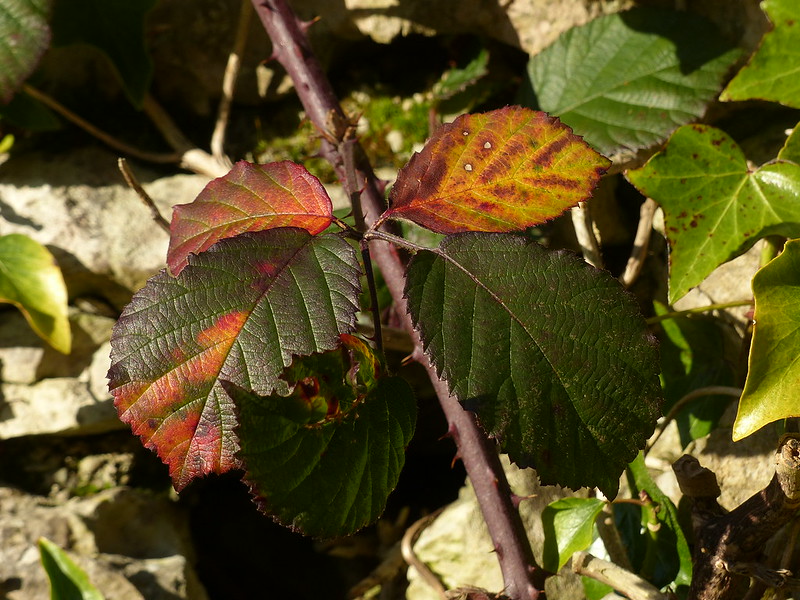 I couldn’t identify a flock of birds in the woods – they didn’t seem like tits or finches, but seemed too small to be anything else – but one of them landed briefly on a distant branch and a photograph revealed them to be more Fieldfares. 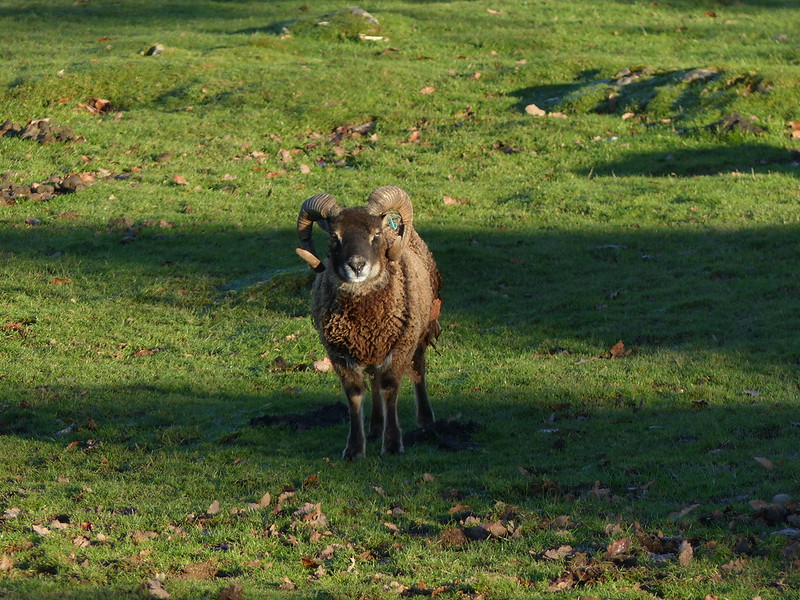 From Silverdale Green to Hagg Wood the path follows a field wall, on the far side of which is a line of tall Oaks (probably planted by the Inman family I believe). Each of these trees had it’s own population of chattering, restless birds, which I enjoyed failing to photograph.

I was admiring the shape and stature of the final tree before the wood, when I realised that this one isn’t an Oak. 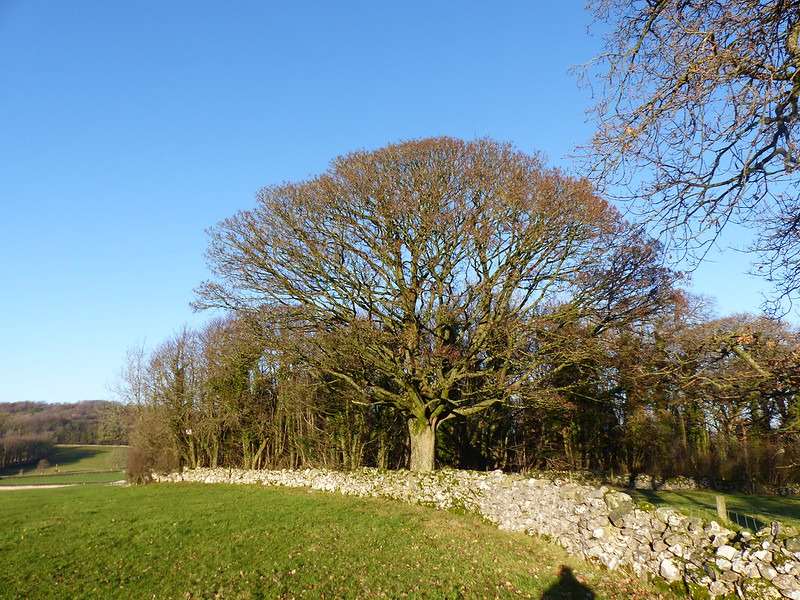 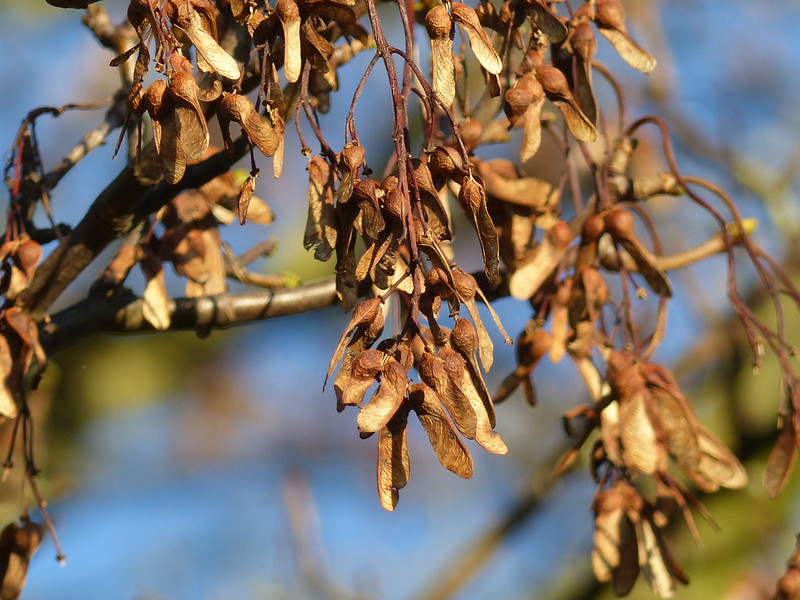 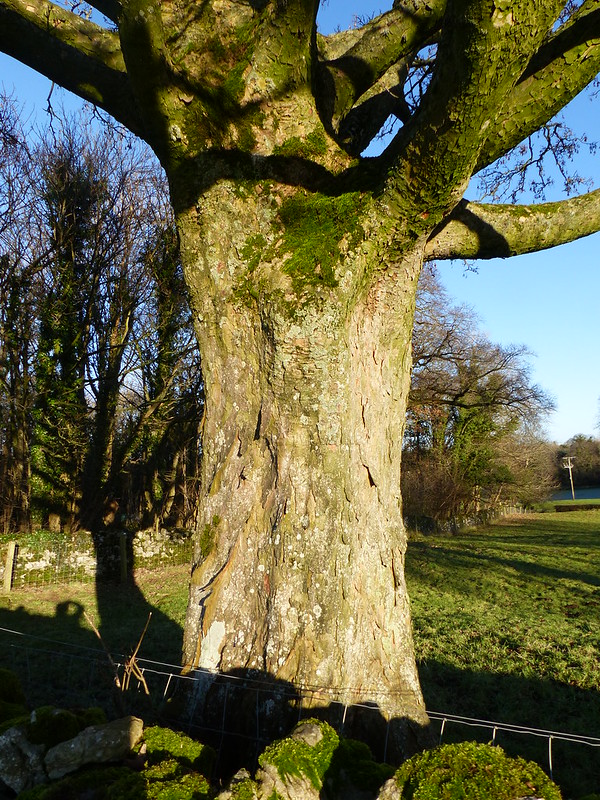 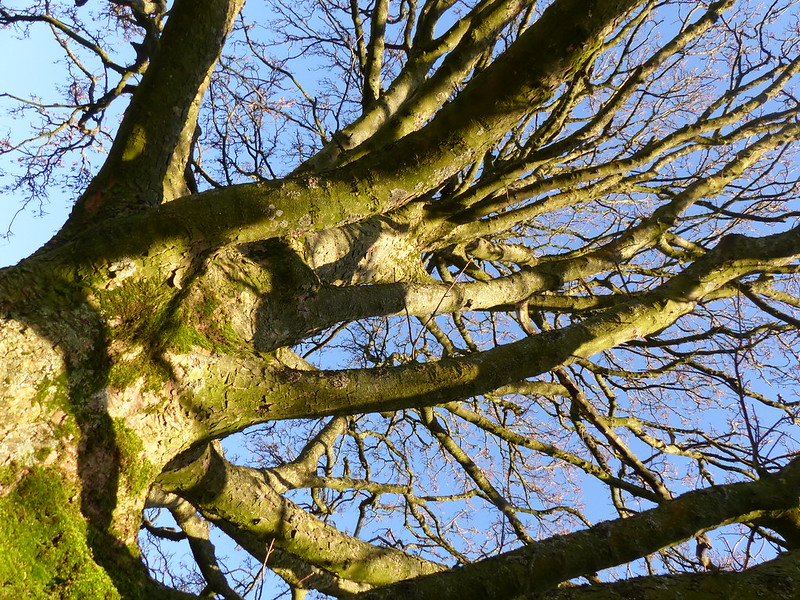 But, although I’m confident that it isn’t an Oak, I’m not sure what it actually is. Never mind, I shall come back when it has some leaves, to see whether I can figure it out.

The Call of Nature.