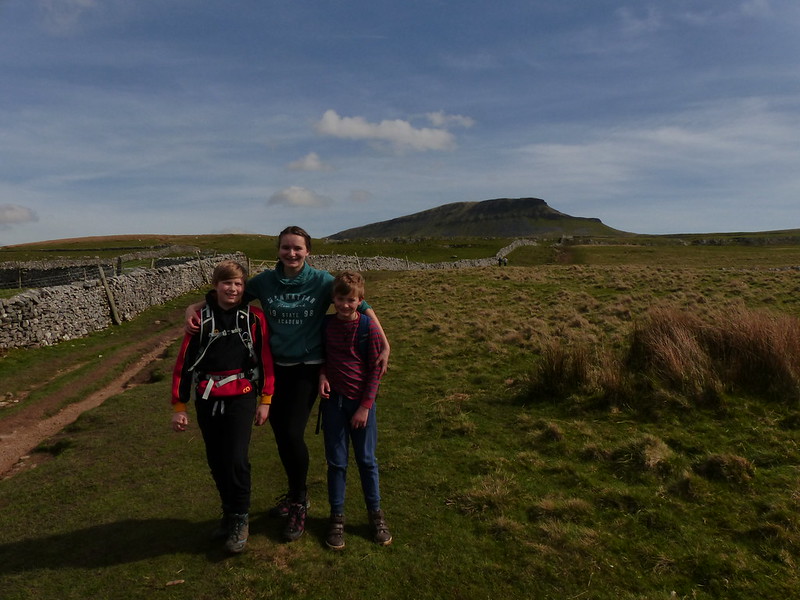 The kids and I were on a mission. I like to climb a mountain on my birthday, if at all possible, or failing that, as close to the actual day as can be arranged. I knew that this year I would be recovering from surgery, and so wouldn’t be up to much on the Big Day, but our Easter holidays had begun (although sadly TBH was still working), and the forecast for the Monday and Tuesday before my op were almost perfect. What’s more, I’d remembered that in ‘Walks in Limestone Country’, Wainwright says:

“April visitors will ever afterwards remember Penyghent as the mountain of the purple saxifrage, for in April this beautiful plant decorates the white limestone cliffs on the 1900′ contour with vivid splashes of colour, especially being rampant along the western cliffs.”

Purple Saxifrage, Saxifraga Oppositifolia, is one of the flowers which appear in ‘Wild Flowers in Danger’ which don’t grow in the immediate vicinity of home, but which can be found within striking distance, and which I’ve therefore decided to seek out.

The sun was shining, the kids were all on fine form, and we made rapid progress up to the south ridge and to the lower line of cliffs seen above. And there just a short, steep climb above the path, we found… 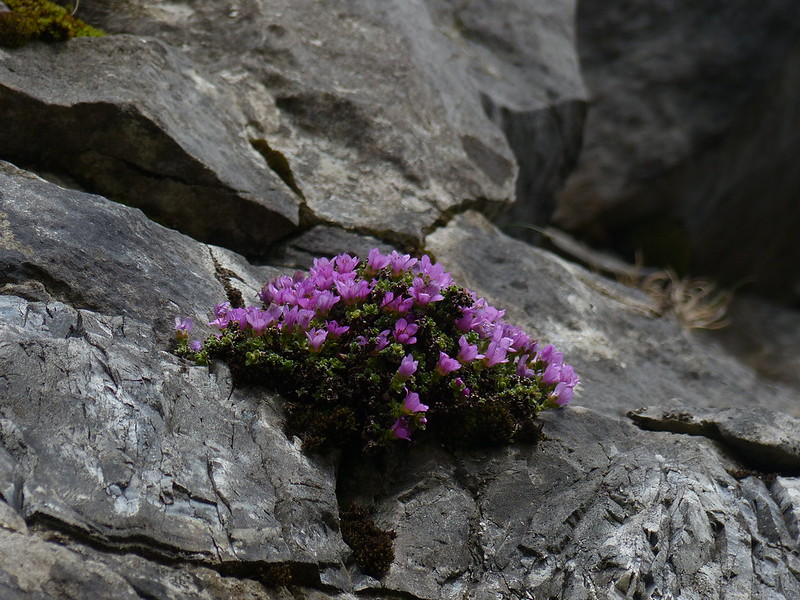 It was almost an anticlimax, but only in as much as I’d been expecting a bit of a hunt to find it. I’m not sure how patient the children would have been with any lengthy deviations anyway, so it was probably for the best that we came across it so easily. 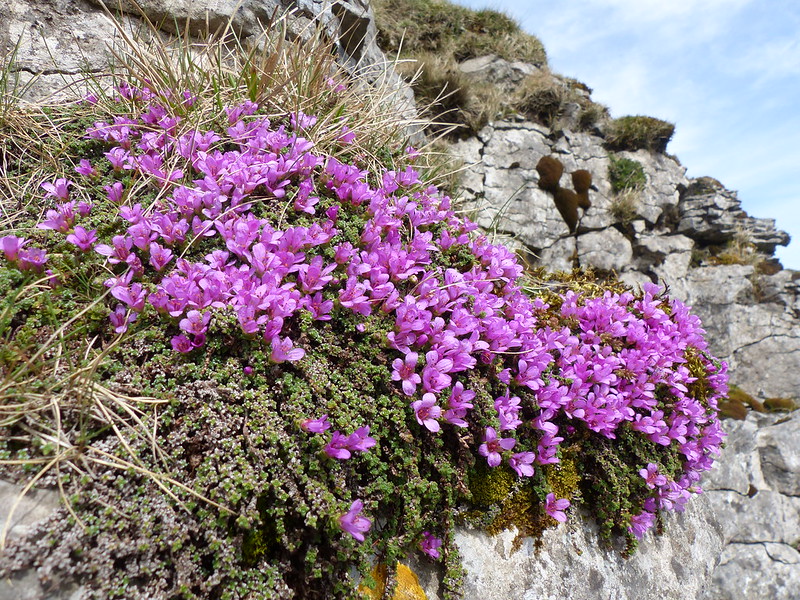 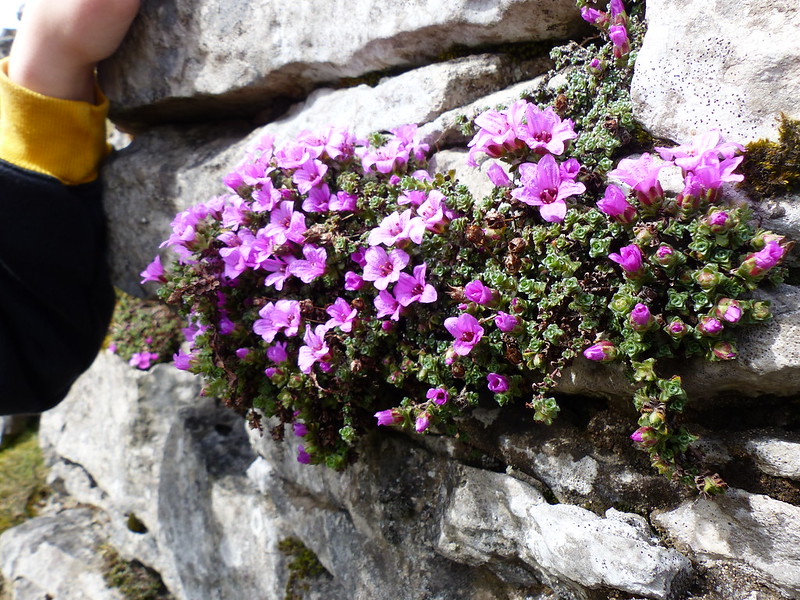 We climbed part way up the steep nose of the ridge, but by now, Little S, always the first to crack, was demanding a lunch stop. When we reached the second steepening of the ridge we found a relatively sheltered spot, out of the wind, behind a wall. 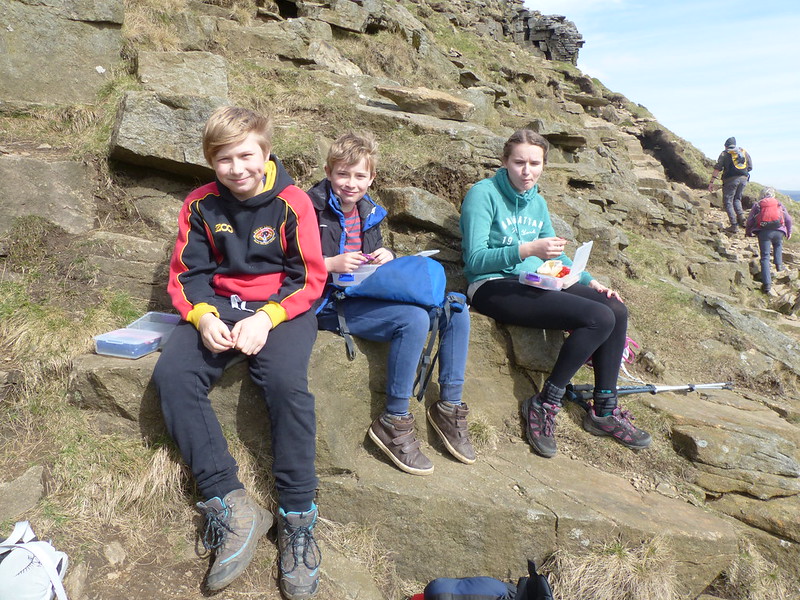 For the first time in quite a while, I’d brought a stove and the makings of a brew. I really enjoyed my hot drink, doubly so since the boys, who had made their own lunches and seriously miscalculated on quantities, were soon eating my lunch as well as their own. 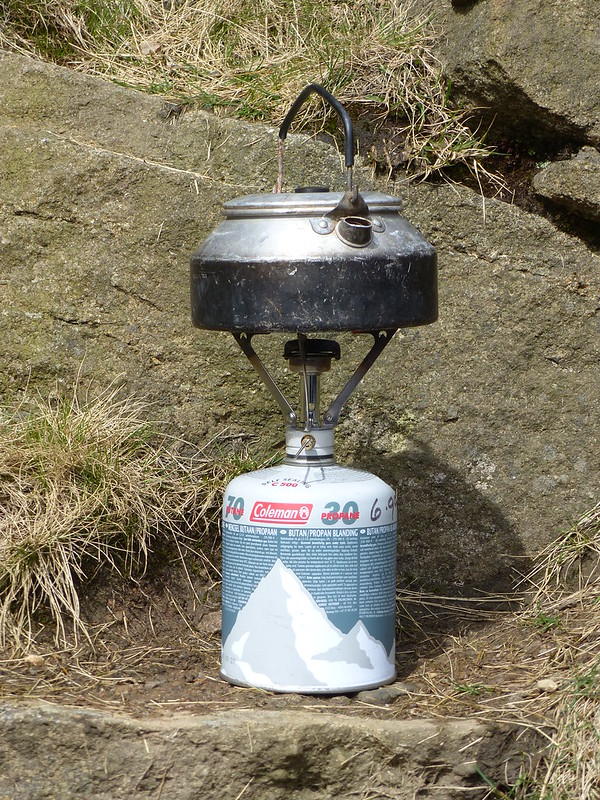 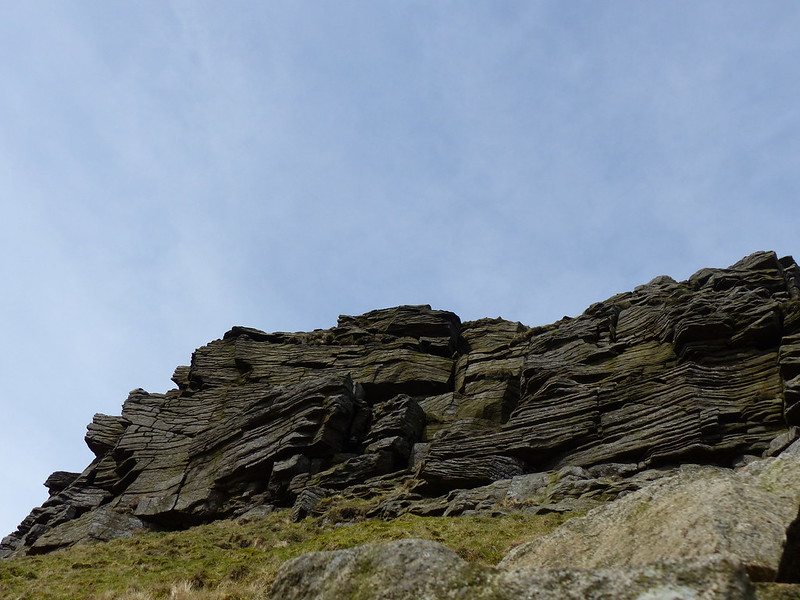 The second, gritstone line of cliffs. “It’s so wrinkled, it looks like an old man,” opined Little S.

From our lunch stop it was quick work to make the summit. 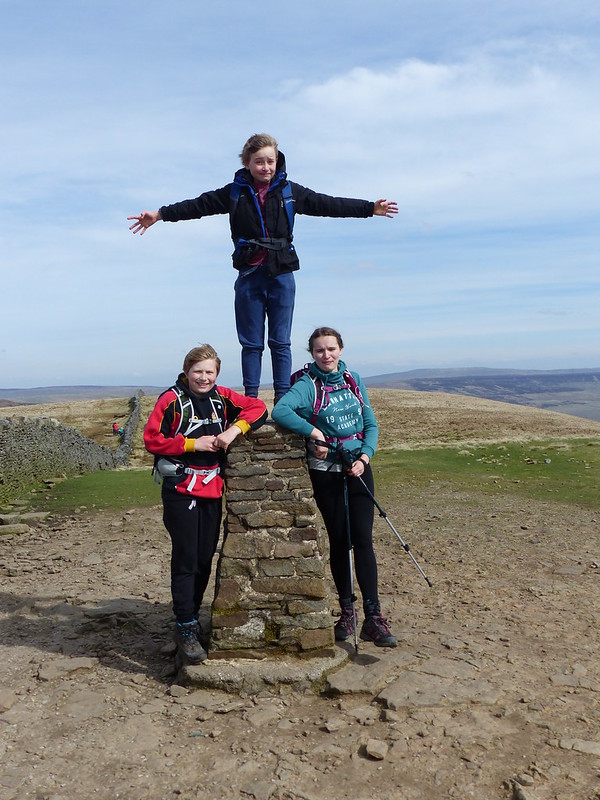 You can probably tell that it was very windy. There is a clever S-shaped shelter there in the wall and we sat for a few minutes. I think the kids would have quite liked to stop for another lunch, had it not come so soon after our previous halt. 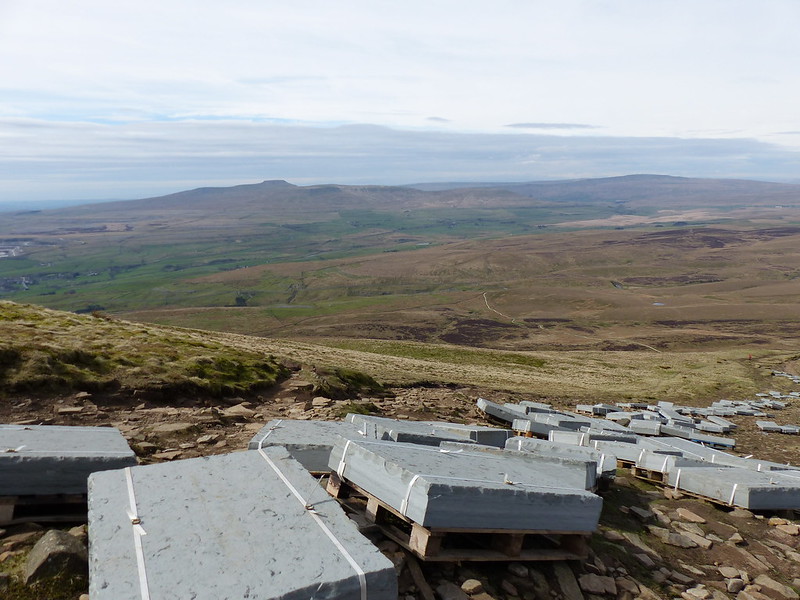 Ingleborough and huge flags for repairing the Pennine Way path. 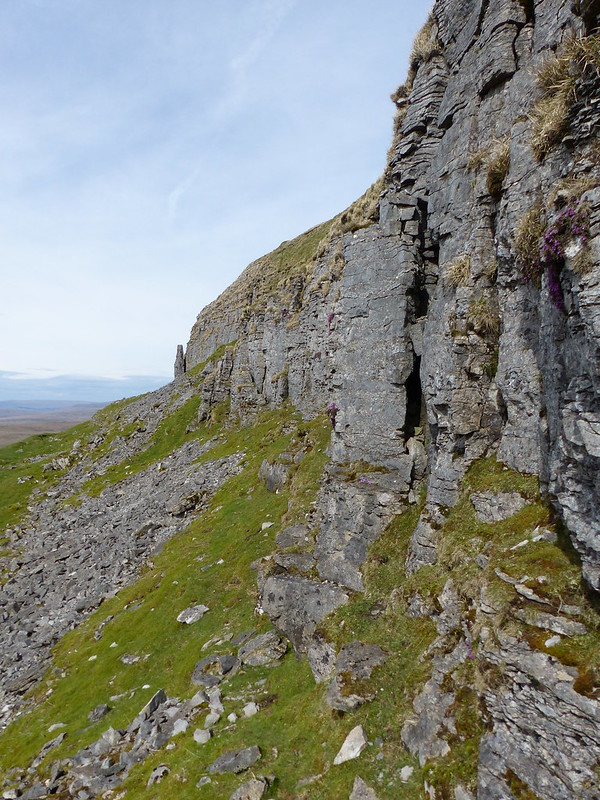 Our descent brought us to the western cliffs, where, just as AW predicts, the Purple Saxifrage is ‘rampant’. 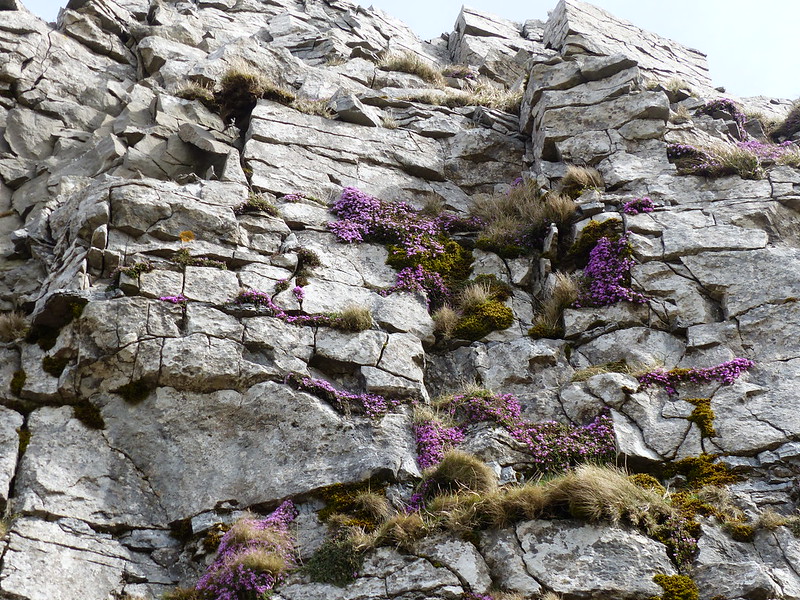 “Traces of the Purple Saxifrage have been found in Britain in deposits that were laid down 20,000 years ago, that is before the end of the last Ice Age. As each of the glaciers retreated north towards the Pole, the Arctic alpine plants – of which the Purple Saxifrage is one – followed up, going ever northward. The Arctic alpines were in turn followed by plants that could live at higher temperatures and, when the ice finally vanished for good, the Saxifrages and other Arctic alpines had to find refuge wherever they could on high mountains, cliffs and the like.”

“At first the plant looks as though it had been showered with white dust, but a close examination of the leaves reveals that each is flattened and truncated near the tip, and that, in the flattened area, is a pore from which small nuggets of limestone are expelled. One would hardly have expected this to happen, as the Purple Saxifrage favours sites that are rich in lime. But the plant also likes constant running water and perhaps this sometimes contains more lime than was bargained for. At any rate most Purple Saxifrages seem to have lime to spare.” 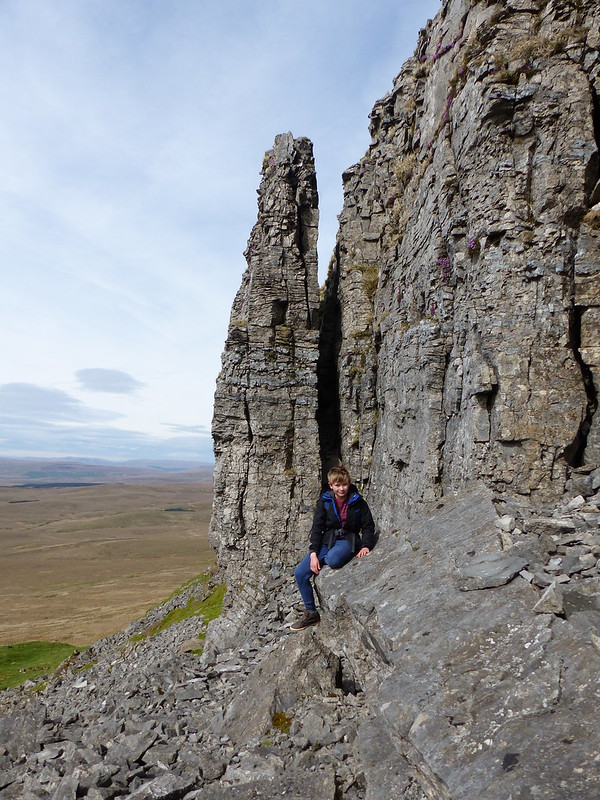 Only Little S joined me for a short exploration of the base of the cliffs, A and B opting to sunbathe (and bicker) back down by the path. Wainwright has a drawing of a limestone pinnacle. I suspect that there may be a few such pillars along the entire length of the cliffs, but this one does look quite like the one in his drawing. 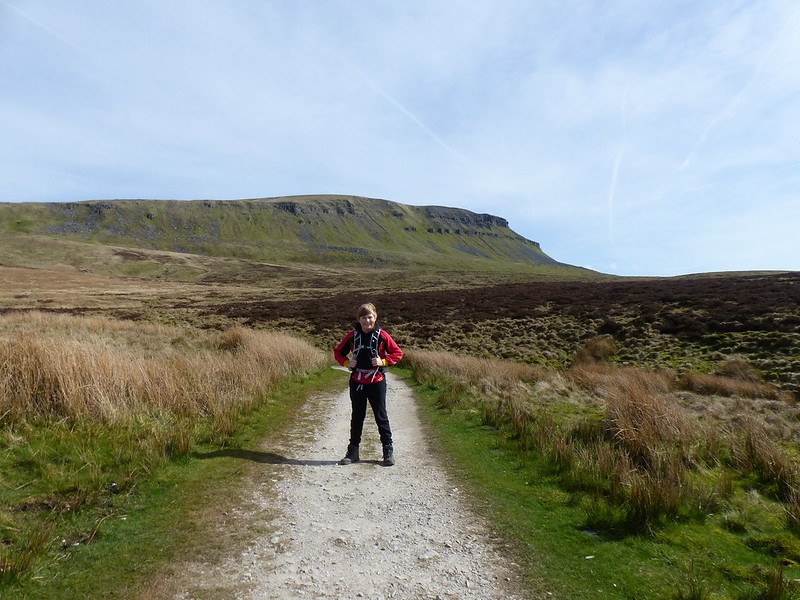 This is only a short walk – Wainwright gives it as 6 miles – but there are plenty of points of interest along the way. The next one being Hunt Pot. 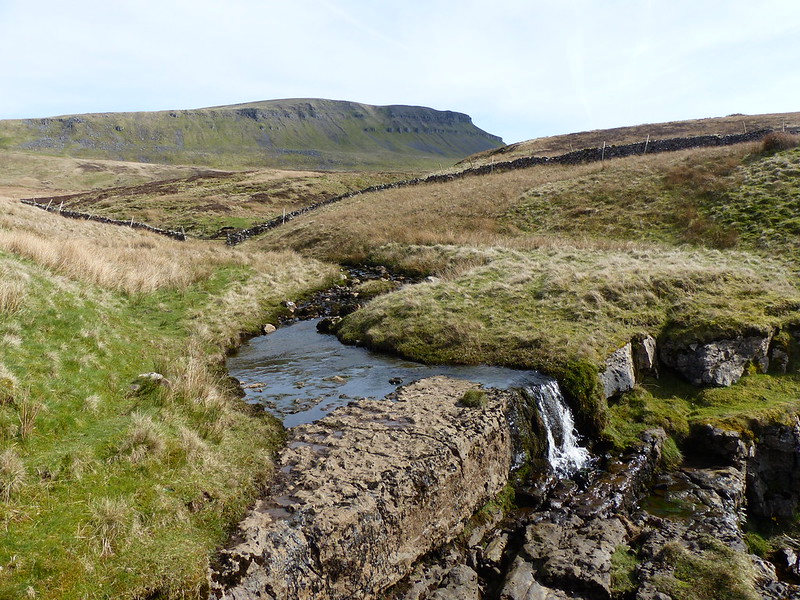 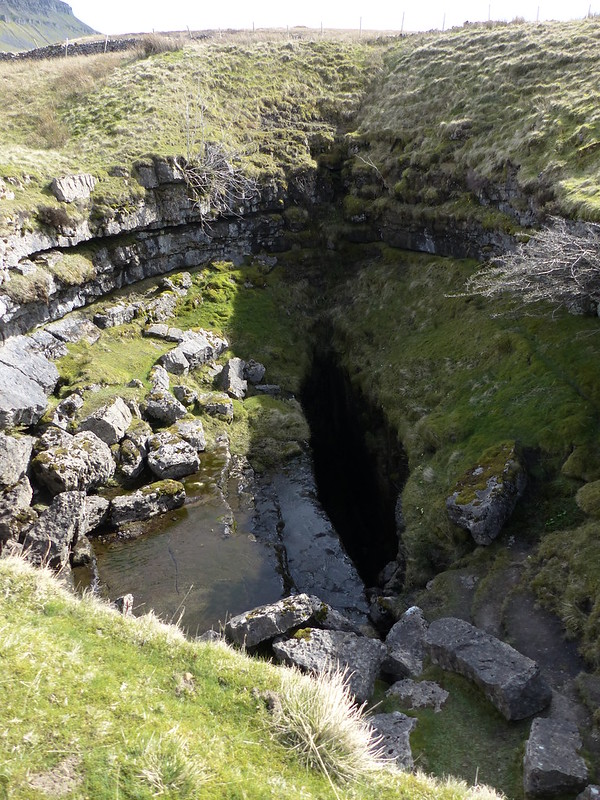 200 feet deep apparently. For us it provided another place out of the wind for lunch stop number two. Or in my case, another cup of tea and the privilege of watching the Gannets demolish the remainder of my lunch. To be fair, they did magnanimously share some of it with me.

The rocky cracks and ledges here, sheltered and protected to a certain extent from sheep,  were decorated with Primroses and Coltsfoot… 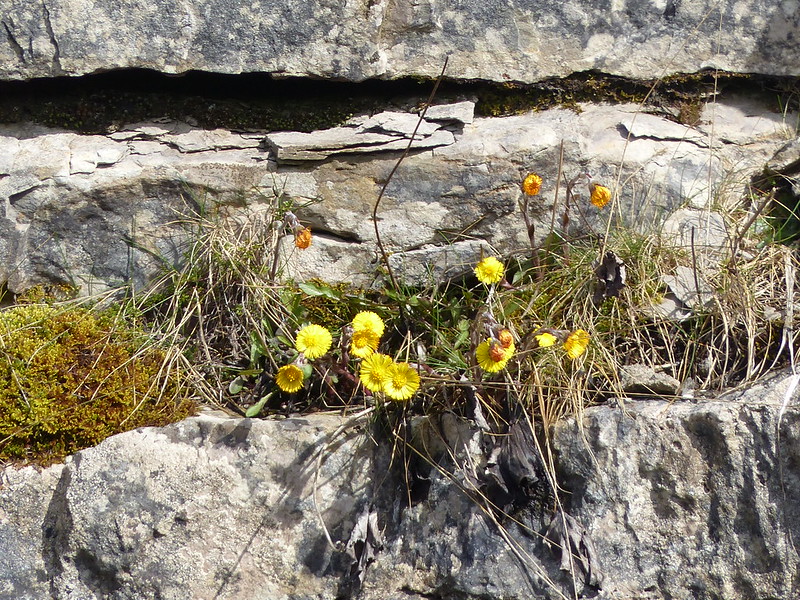 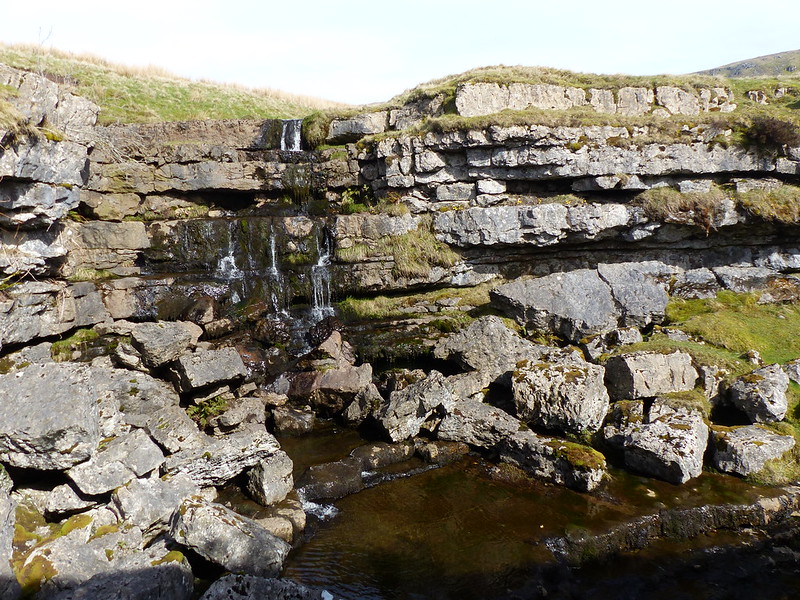 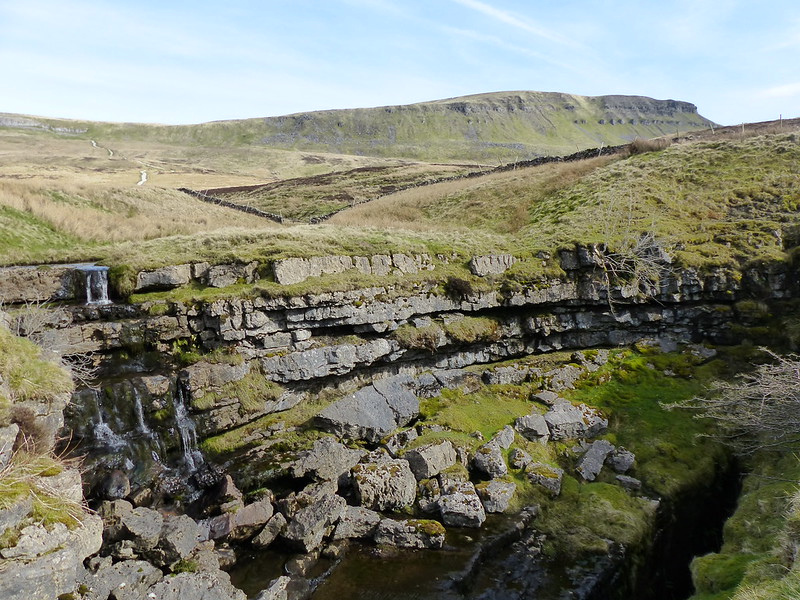 Dark clouds were hurling in from the west now, but we had one more landmark to locate. Due to a bit of navigational muppetry, we came at it from above, following Hull Pot Beck… 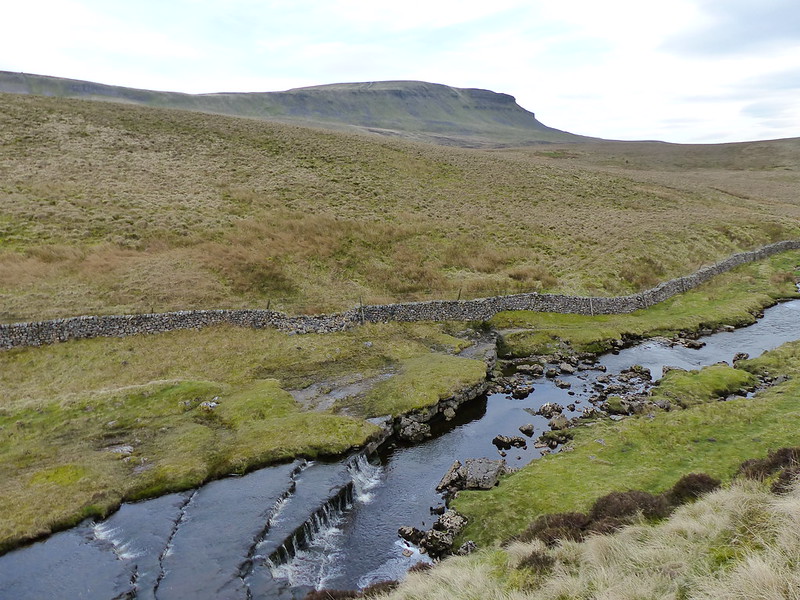 Where there were both Pied and Grey Wagtails flitting about. 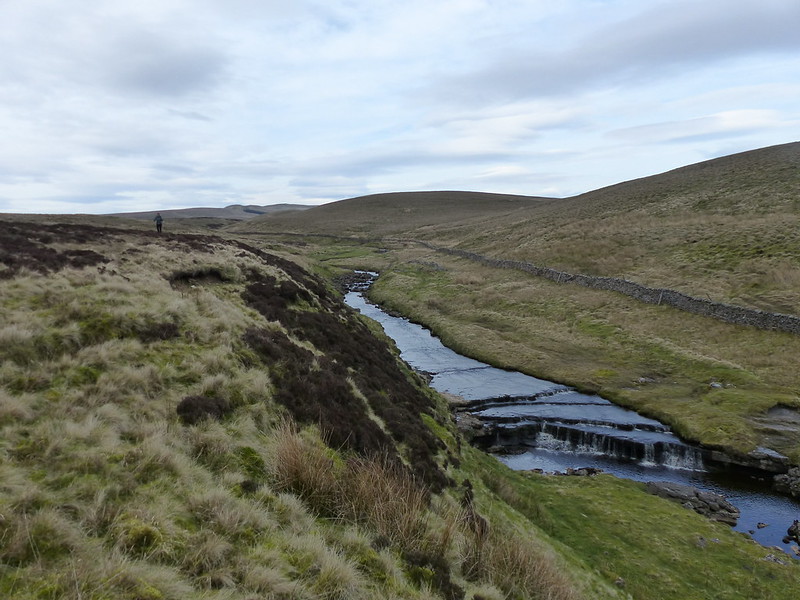 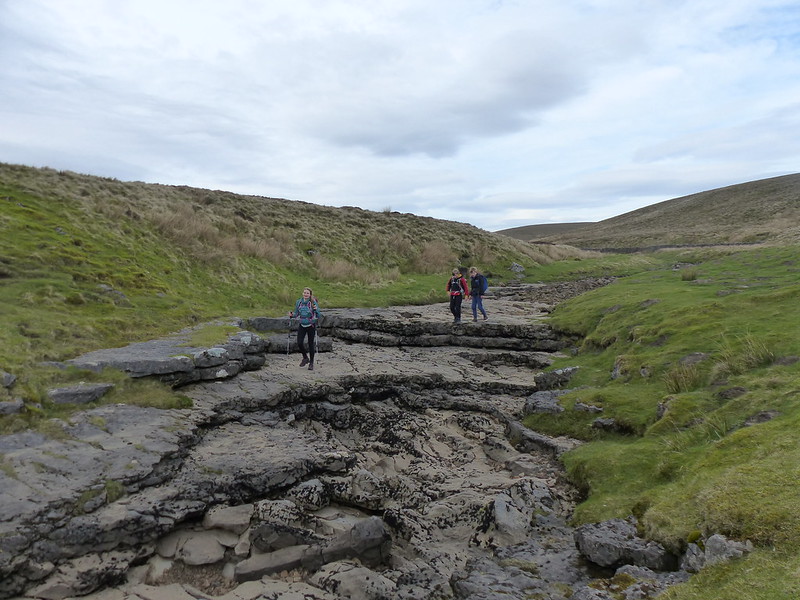 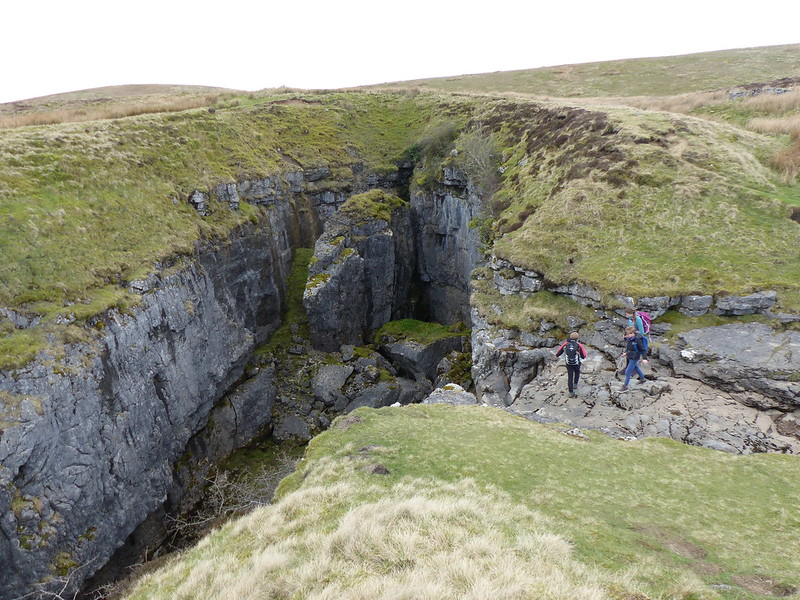 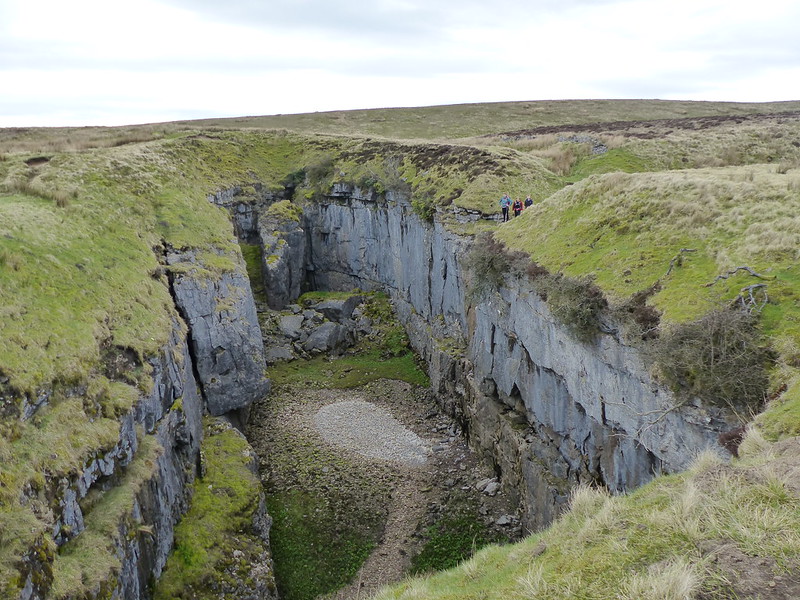 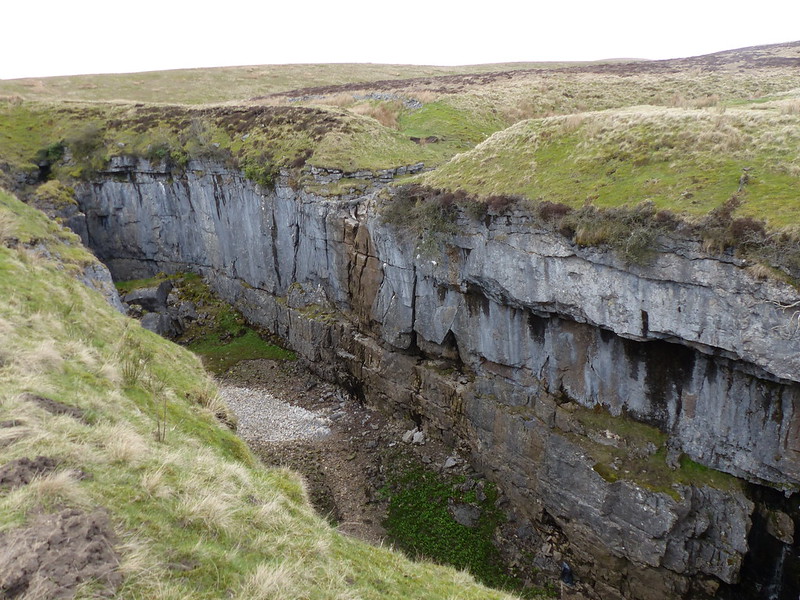 The missing water emerges part way down the cliffs… 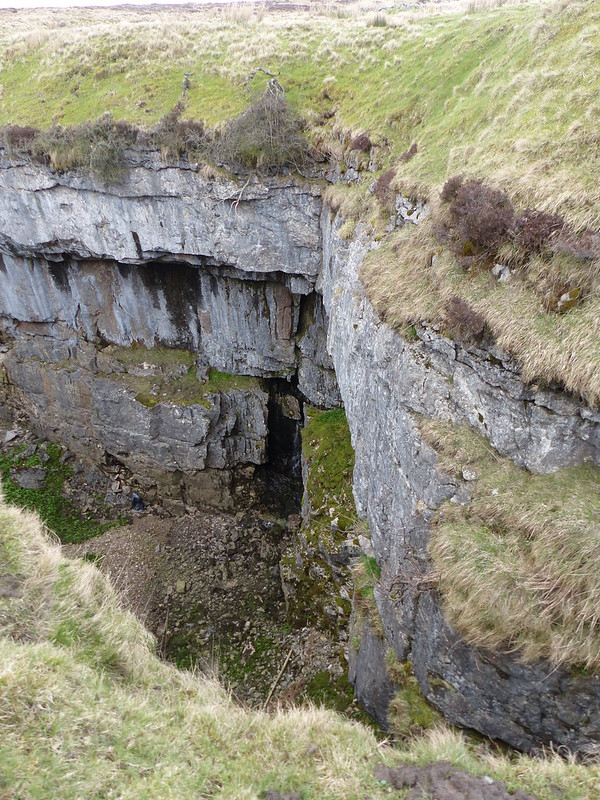 But apparently, after heavy rain a waterfall flows directly into the top of the pot, which, on occasion, can actually fill with water. I can see myself making a return visit to witness that. 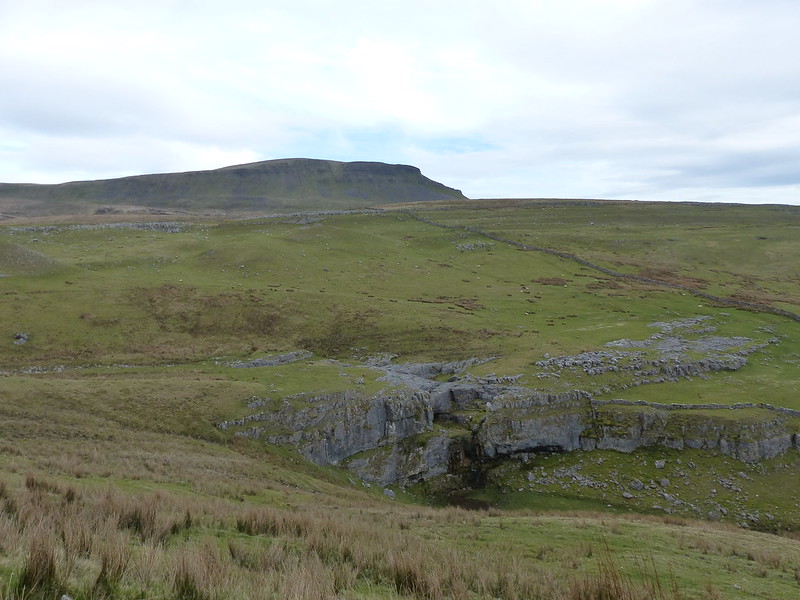 In all, a great day out, in marvellous company. Certainly on a par with some of my favourite previous birthday hill-days. But, being greedy, I was determined to try again on the Tuesday and see if we could go one better. (More to follow!)

The kids meanwhile are quite taken with the idea of ‘The Three Peaks’. The boys, having done two of them in quick succession, would like to knock off Whernside, in fact were angling to do it the next day, and all three of them are keen to have a crack at the Three Peaks walk. I need to get into training!