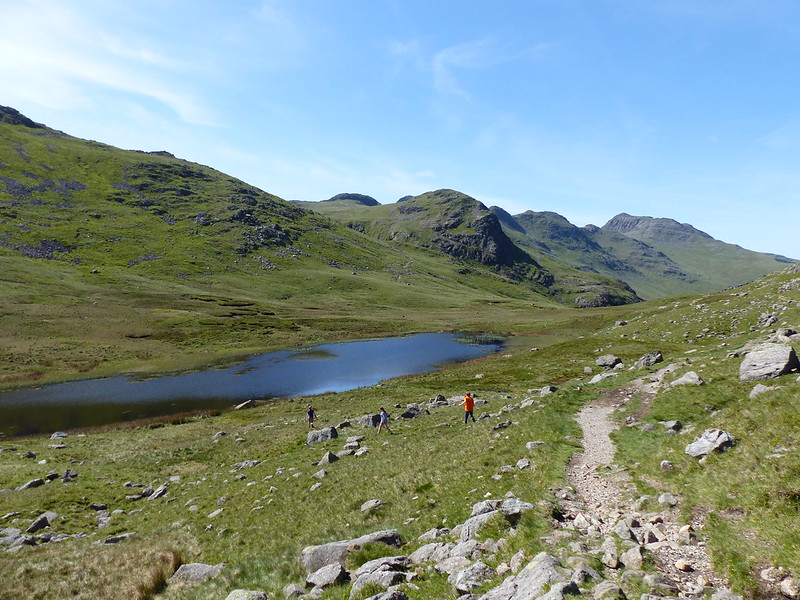 It’s been a long time on preparation this trip: the kids have all wanted to try a wild-camp for quite some time, and have been accumulating kit via Christmas and Birthday present requests to that end. I’ve slimmed down enough to manage to squeeze into an ordinary sized sleeping bag and have bought myself a down-bag to celebrate. TBH has agreed to join us in roughing it. All we needed was the right weather, so a forecast for a couple of  settled days in the middle of Whit week had us all packing our bags for the off.

We managed to find a parking space at the top of the Wrynose pass and plodded up the path to Red Tarn. 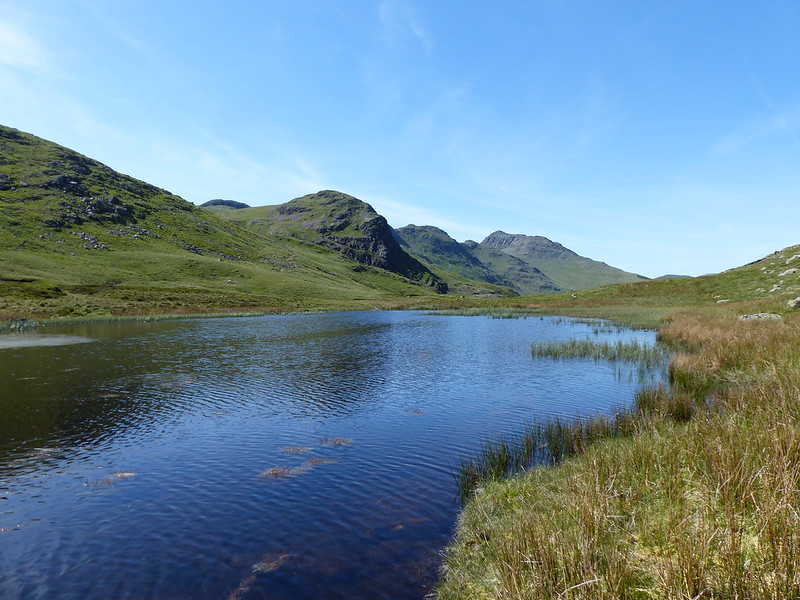 I camped above here, on the slopes of Pike O’Blisco, on what must have been my own first wild-camping expedition, back in September 1985. This was one potential site, if any of us had been struggling with our loads we would have stopped hereabouts.

Little S had other ideas:

When we joined my old school-friend J on Haystacks for his final Wainwright tick, B spotted a newt in floating near the surface of the water in the small tarn near the top. It wasn’t at all surprising that it was B who first spotted the newts in Red Tarn: 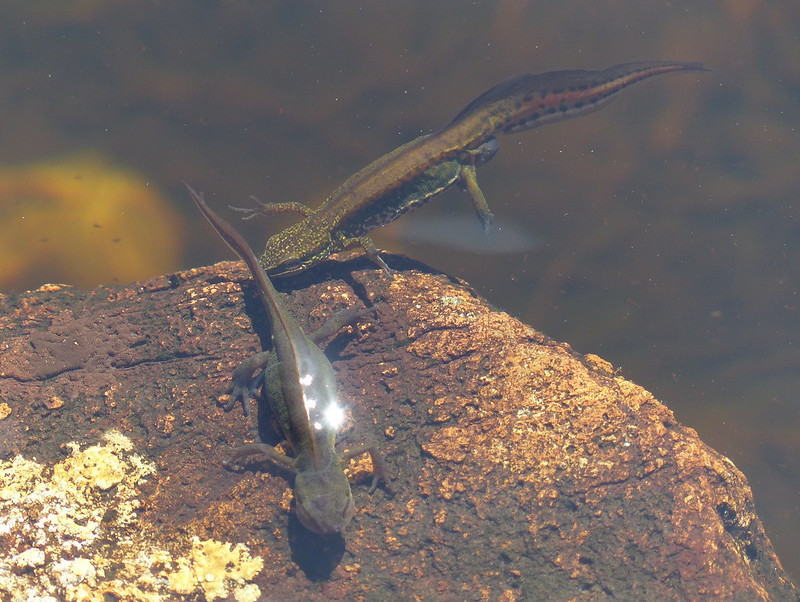 There were quite a few about, and they weren’t at all discouraged by our proximity, even when the kids entered the water… 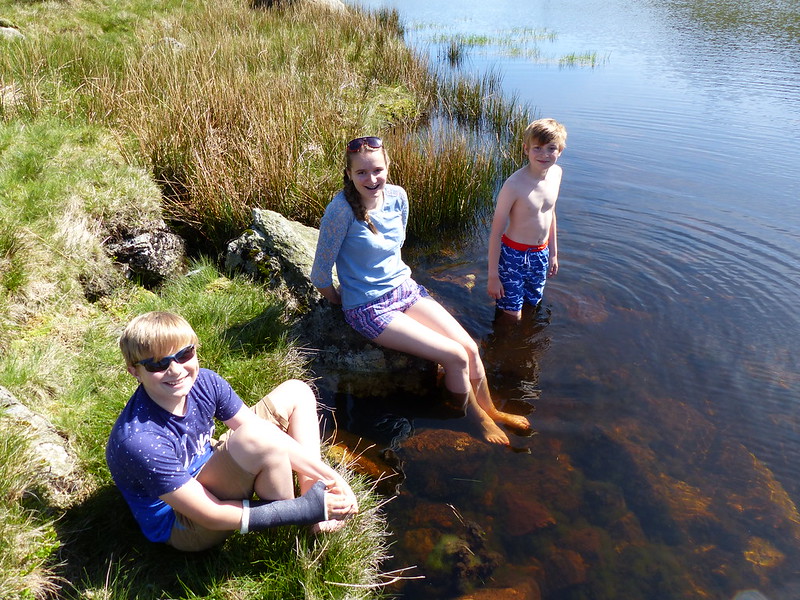 In the end, nobody swam. B was quite contemptuous of the other two: “Just duck in and swim. If I didn’t have this pot on I’d be swimming.”

I’m inclined to believe him. 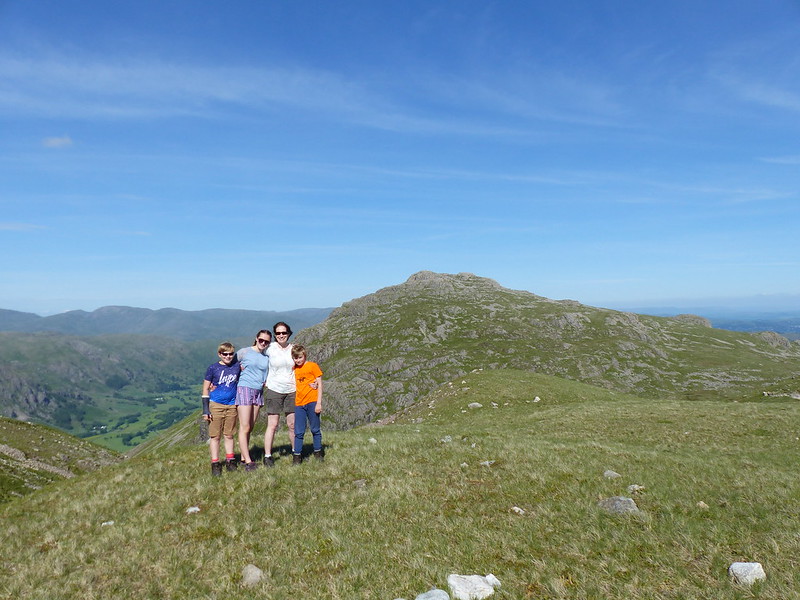 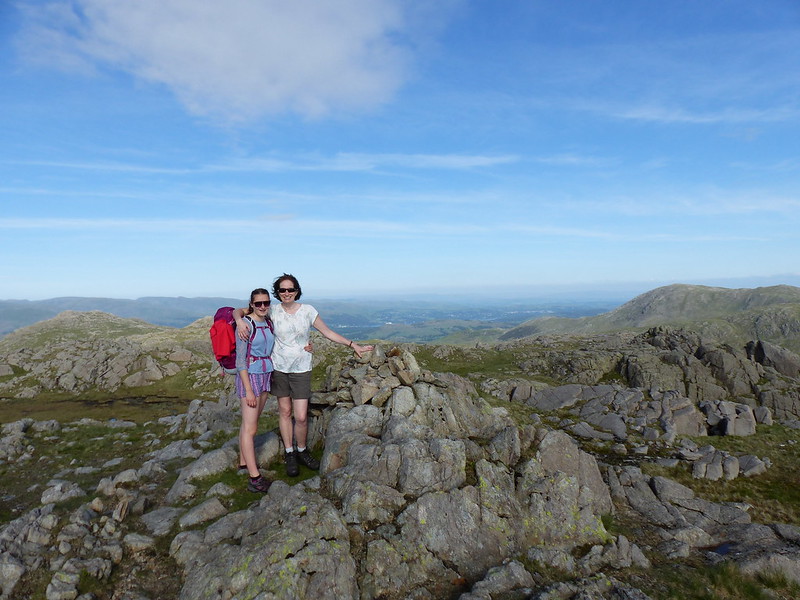 As a result of monthly walks with our friend Dr R, TBH has developed a sudden interest in Wainwright bagging, and was very excited when I erroneously told her that Little Stand is a Wainwright. I should have realised my error sooner: there is virtually no path at all on Little Stand. This is one of Wainwright’s suggested routes up Crinkle Crags, but obviously that isn’t enough to bring the crowds.

Although fair weather was forecast, we were expecting cloud cover to come in off the Irish Sea, and in fact it was already stealing in by the time we reached Little Stand. 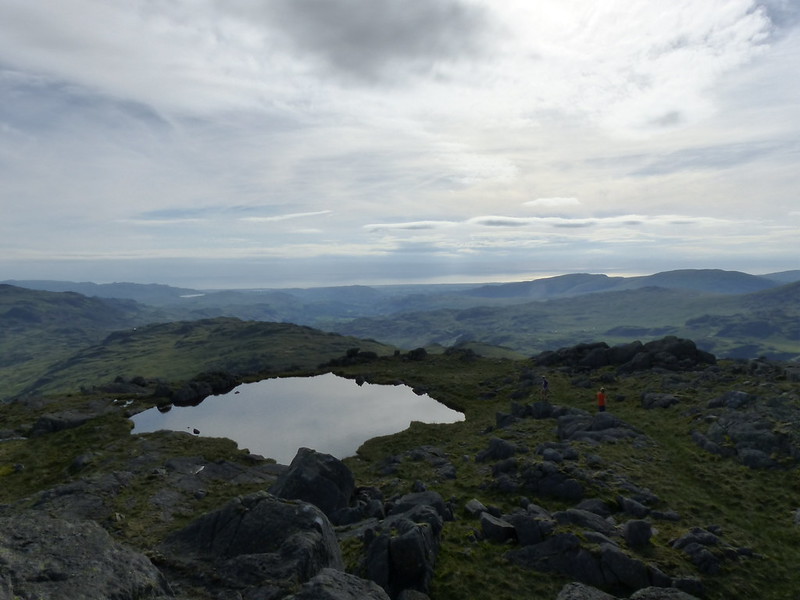 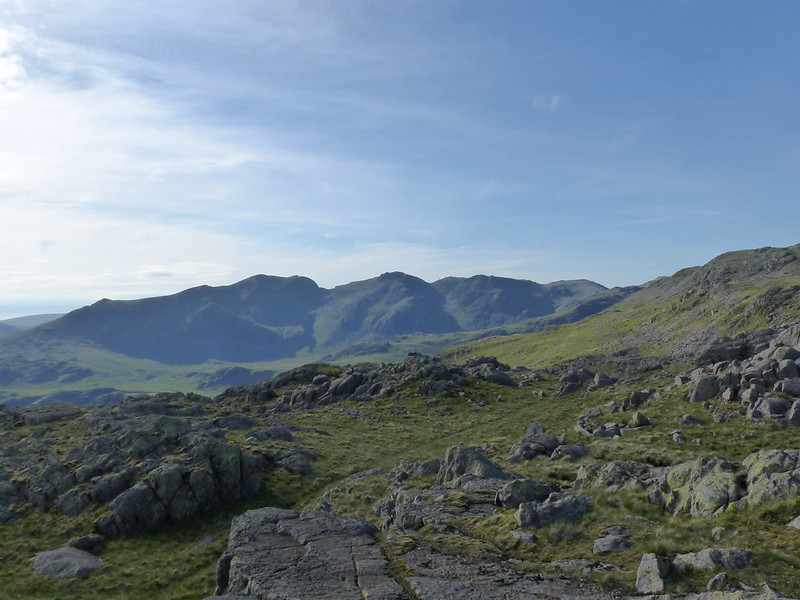 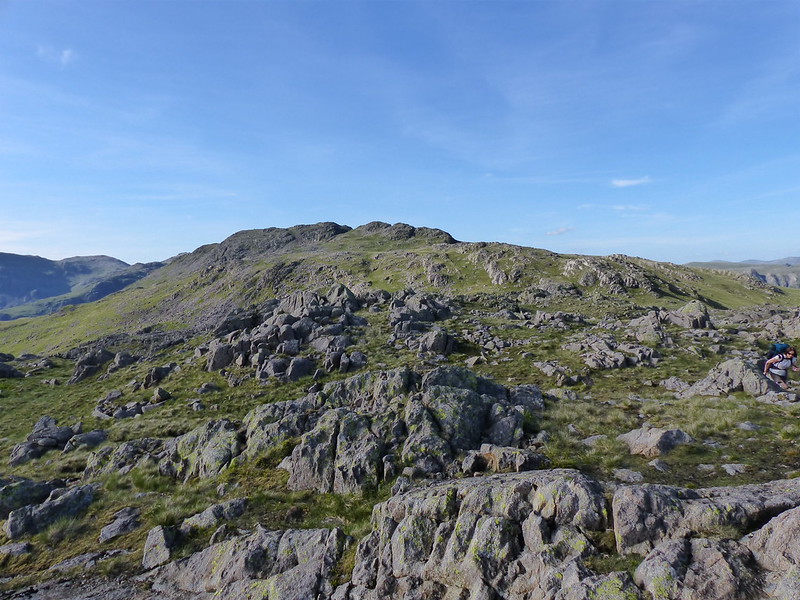 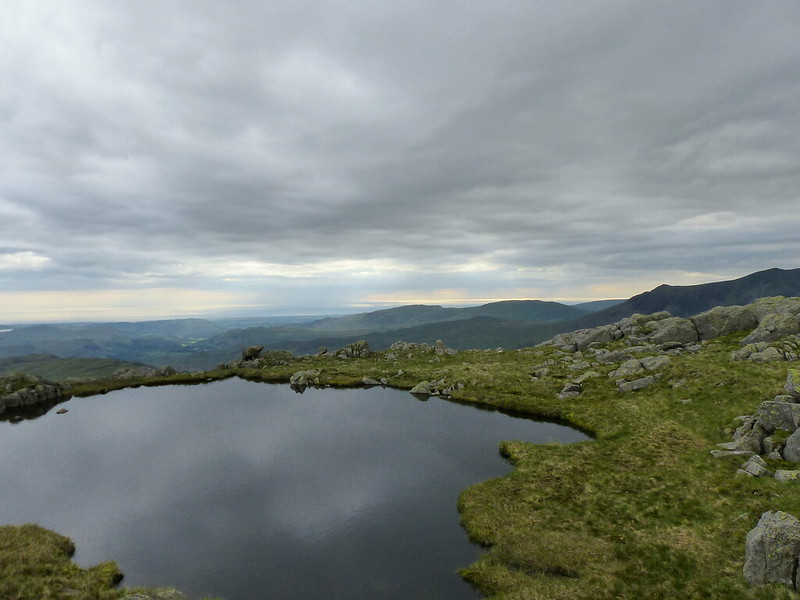 Fortunately, the kids approved of my camp-cooking and made short work of the pasta I’d brought. I found a comfortable slab of rock and sat by the tarn, using my old MSR water-filter, which requires a lot of pumping and is a bit laborious.

“Look at your Dad sat there with his legs crossed. He looks like Buddha. Look at him: he’s happy.”

I thought we might get some kind of sunset, but we had to content ourselves with a line of brightness out over the sea. 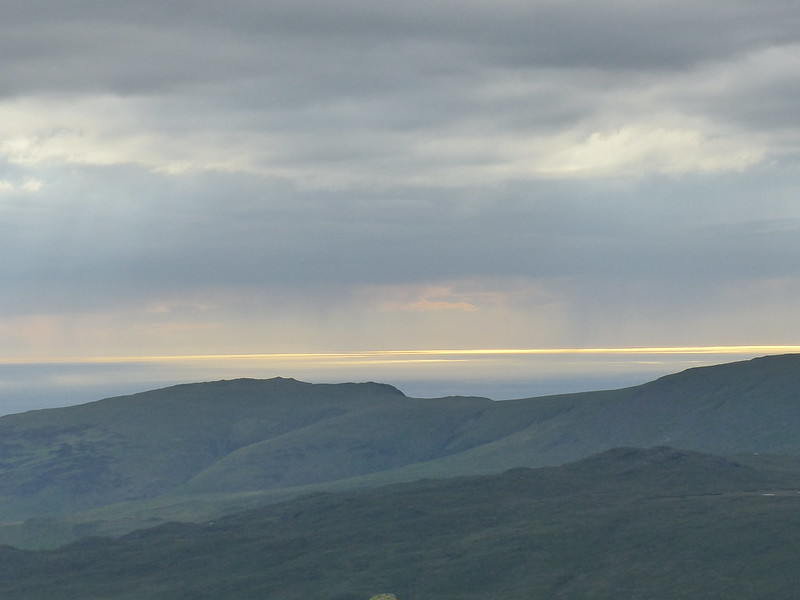 It was at this point that the wheels started to come off, at least to some extent. The weather, as I say, was supposedly set fair. But it began to rain. 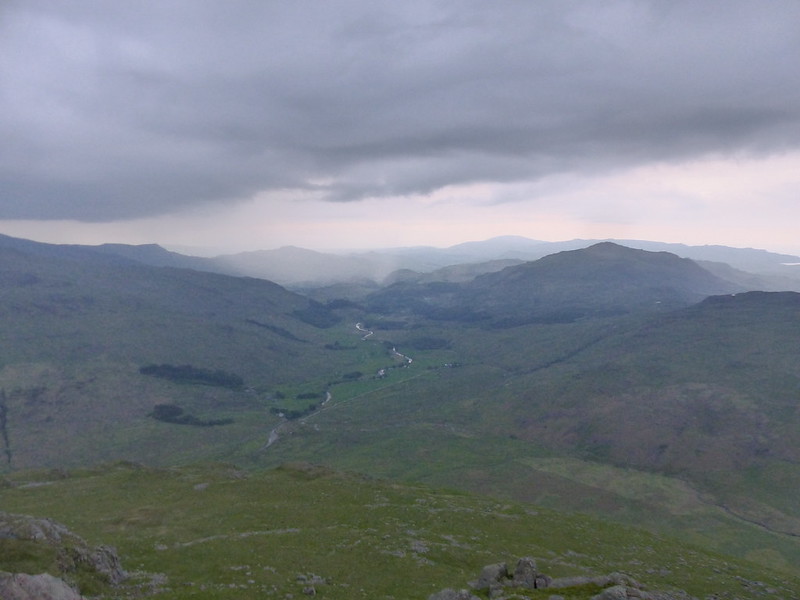 TBH and A had already retreated to their sleeping-bags. The boys were charging around the tarn, attempting to circumnavigate it without leaving the rock at any point. I watched a pair of Peregrines circling round the steep slopes to the south, then, as the rain intensified, suggested to the boys that we hit the sack too. 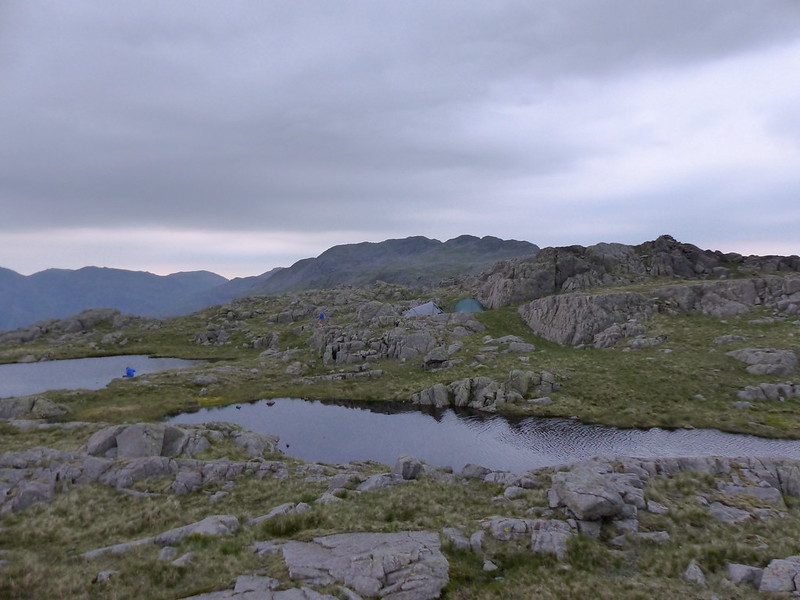 It was a pretty wet and windy night. The Quechua tent survived the wind fairly well, something I had been worried about, but the fly and the inner were pushed together at the back, which was facing the wind, so that the foot of our sleeping bags did get slightly damp. 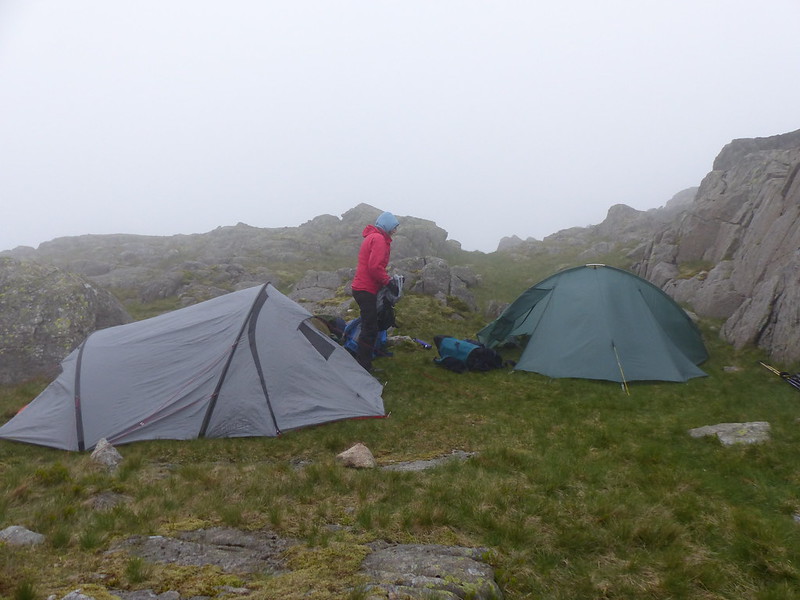 We woke next morning to find ourselves in the cloud. Porridge, tea and a quick pack-up and we were on our way. The general enthusiasm of the night before for climbing Crinkle Crags, Cold Pike and/or Pike O’Blisco had completely evaporated.

A bit of judicious compass work brought us back to the path at Browney Gill, where we finally dropped below the cloud.

At one point B decided to assist with the navigation:

“This is the right way, Dad. We came this way last night.”

“We passed that white sheep with a black lamb.”

From that point on, virtually every sheep we saw was white and was accompanied by a black lamb. B stuck to his guns, though, brazening it out by claiming that the same lamb and sheep were leading us down the mountain. 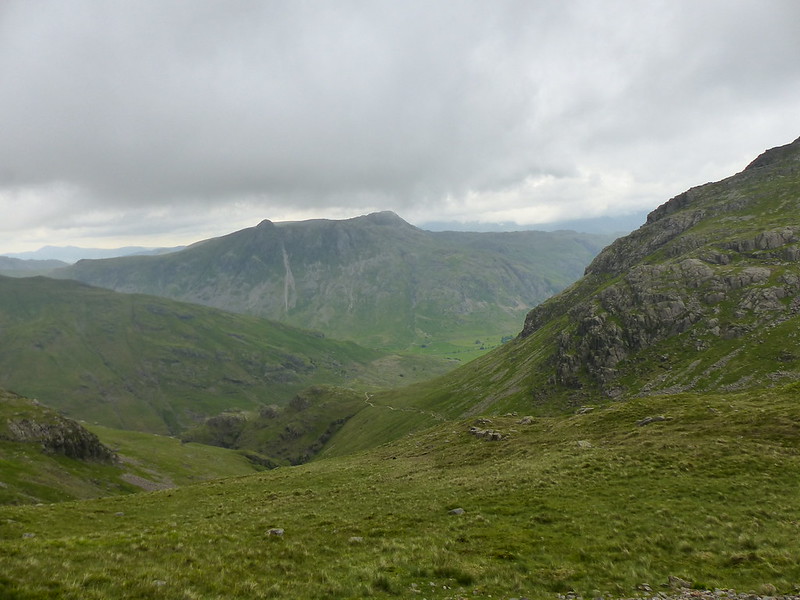 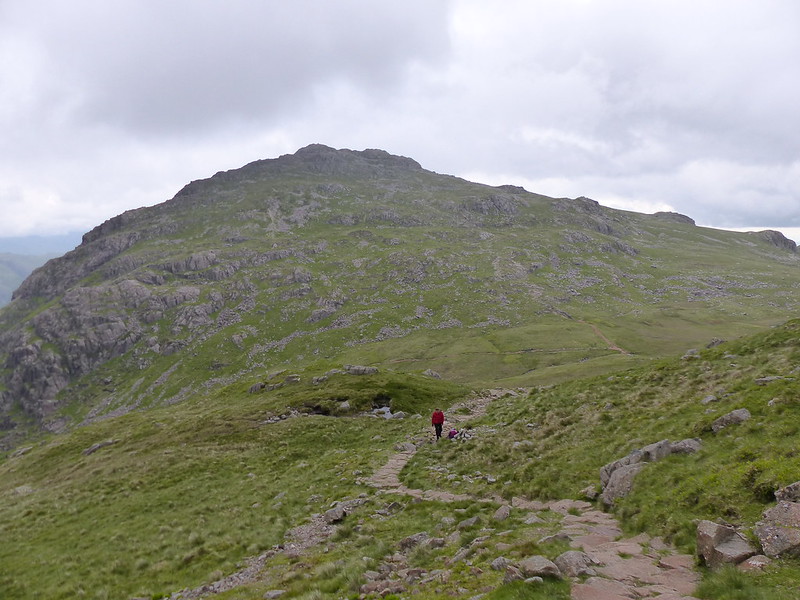 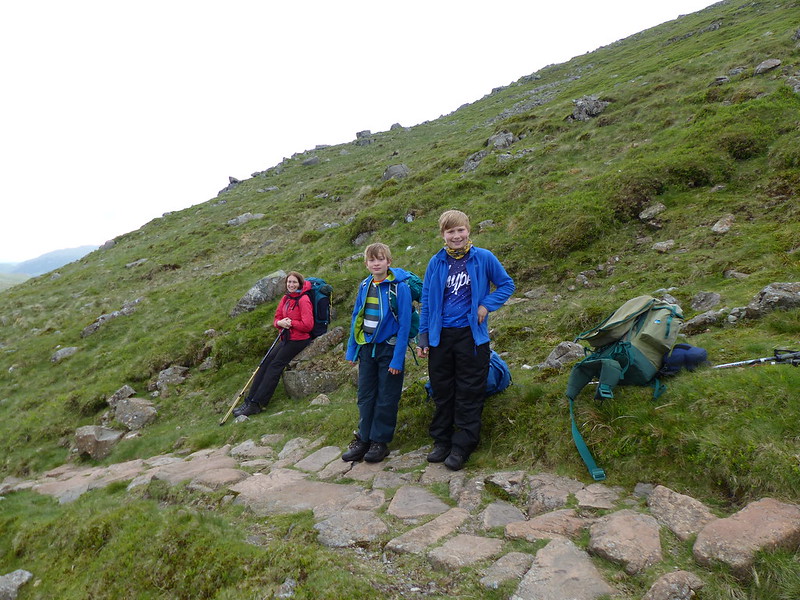 Perhaps things didn’t turn out quite as we had hoped, but it was still an excellent first outing. Here’s to many more.