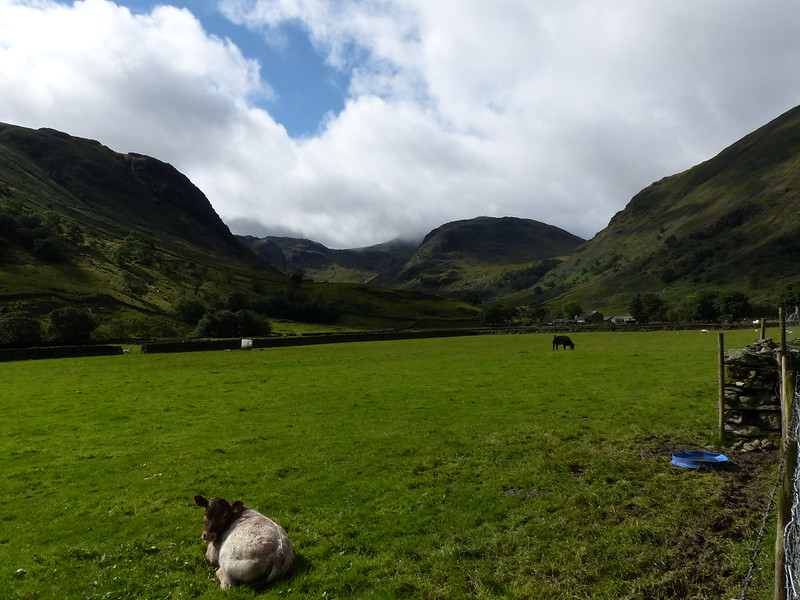 Around the New Year, TBH is always keen to reflect, to look back at the year gone by and to make plans for the year ahead, “What do you want to do this year?” she’ll ask each of the rest of the family. My answer is always deeply predictable and revolves around getting out for lots of walks and finding some time for some camping and canoeing. Of course, TBH has her own ideas and this year suggested that we might set ourselves the target of climbing the National summits, Ben Nevis, Snowdon and Scafell Pike.

Scafell, being closest to home, would, in theory at least, be the easiest to tick off, but things haven’t entirely gone to plan; we expected to complete the climb in May when we were camping in Wasdale, but high winds made that an unwise choice; then we decided to camp in Upper Eskdale in June and ascend it from there, but again the weather didn’t cooperate and we camped elsewhere instead. I tried to resurrect the Eskdale plan this summer, but the forecast wasn’t entirely convincing, so in the end we elected to tackle the hill in a day-trip.

When we parked on the verge at Seathwaite, the waterfalls of Sourmilk Gill were looking resplendent and I was glad that we’d opted not to camp: with the streams running very high, I wondered what Great Moss would be like – we might have struggled to find a dry enough spot to camp and we certainly would have found ourselves struggling with conditions underfoot.

This would prove to be a day of very changeable weather; we set-off in rain and were soon kitted out in our waterproofs, but by the time we had walked a little way up the valley, the sun was shining, with dark shadows flitting across the landscape in response to the threatening clouds scudding overhead. 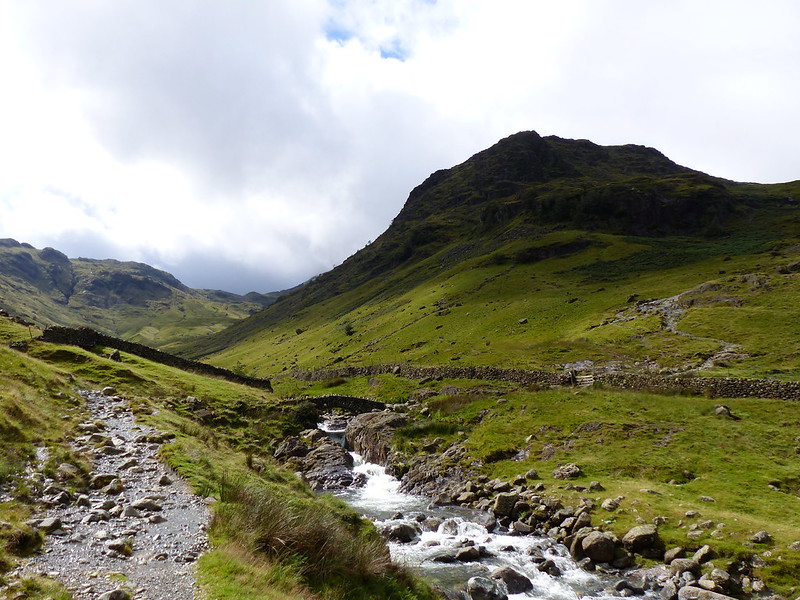 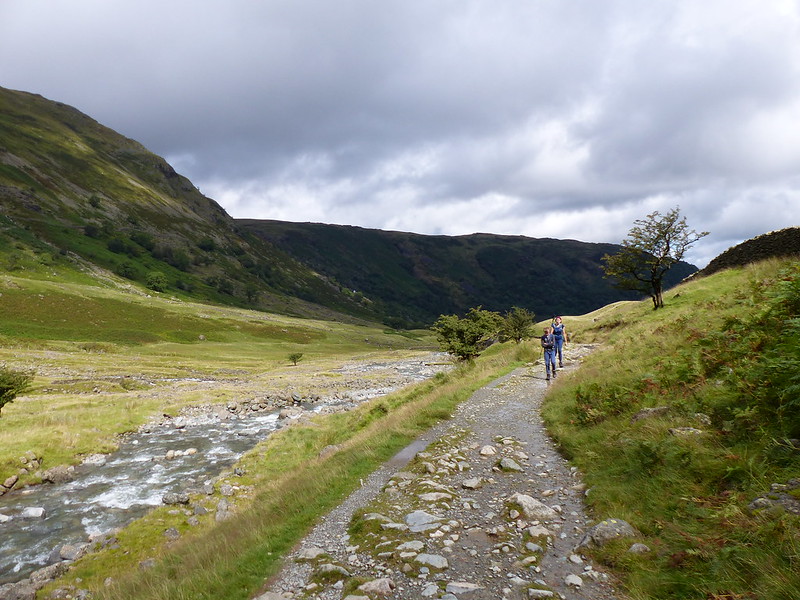 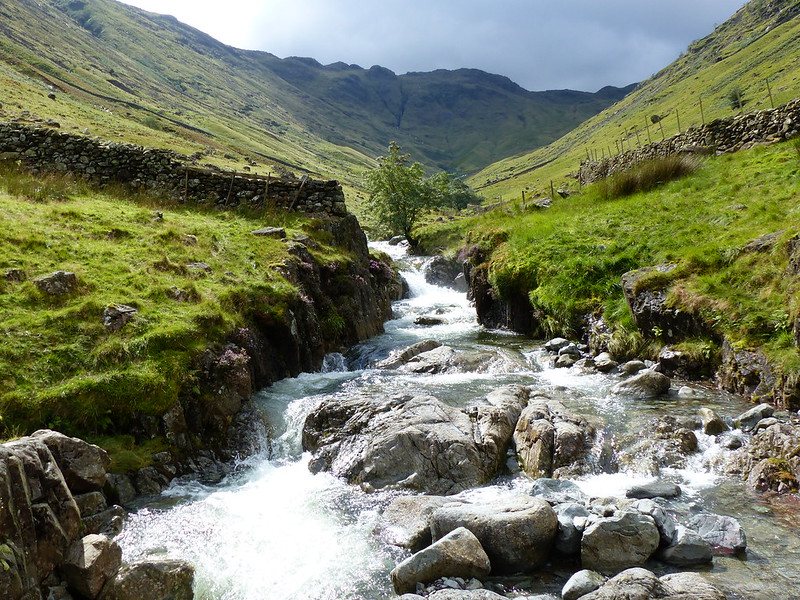 I had been hoping to assess the suitability of the pools around Stockley Bridge for swimming purposes. I think there is some scope for a dip here, but the stream was running too high today. 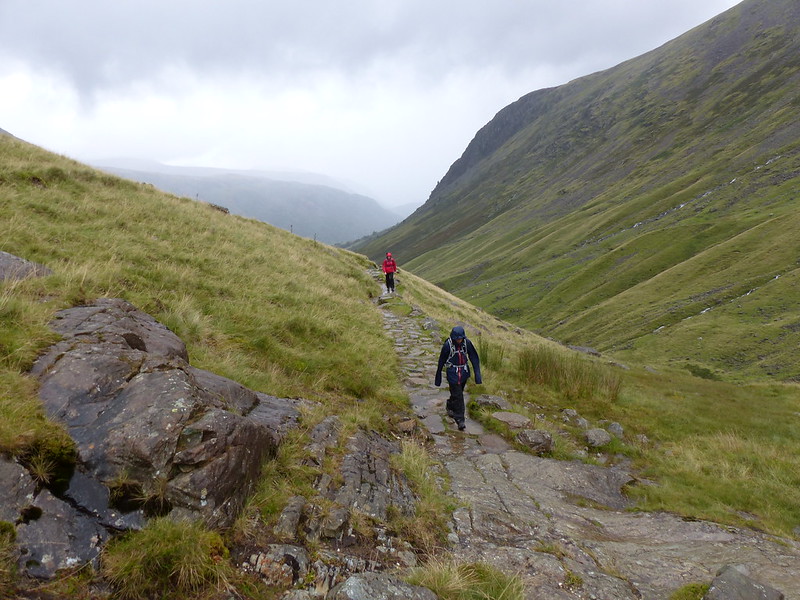 We continued to follow Grains Gill and then Ruddy Gill, and although it was soon raining again, our spirits weren’t dampened. The gill, in high water, looked very fine and ahead the crags of Great End were continually disappearing and reappearing in veils of mist. 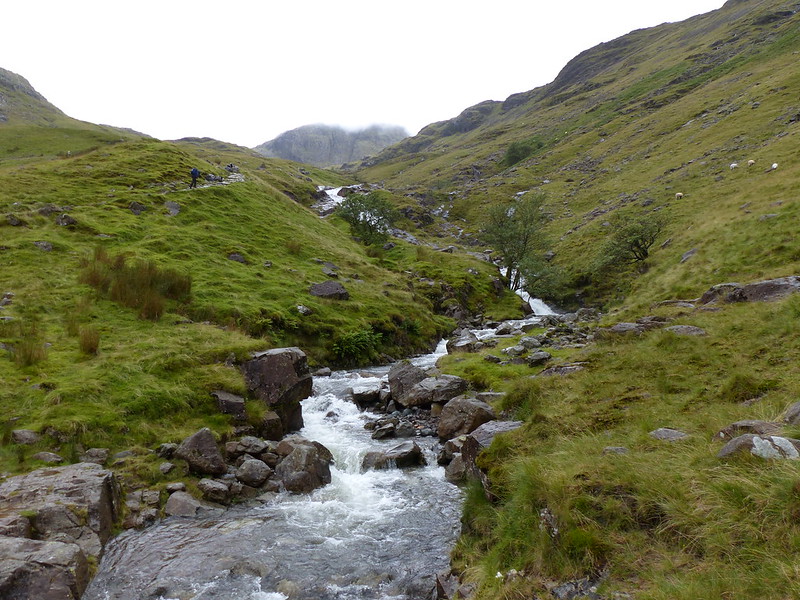 When it brightened again, we found a spot to sit for some butties and a brew. 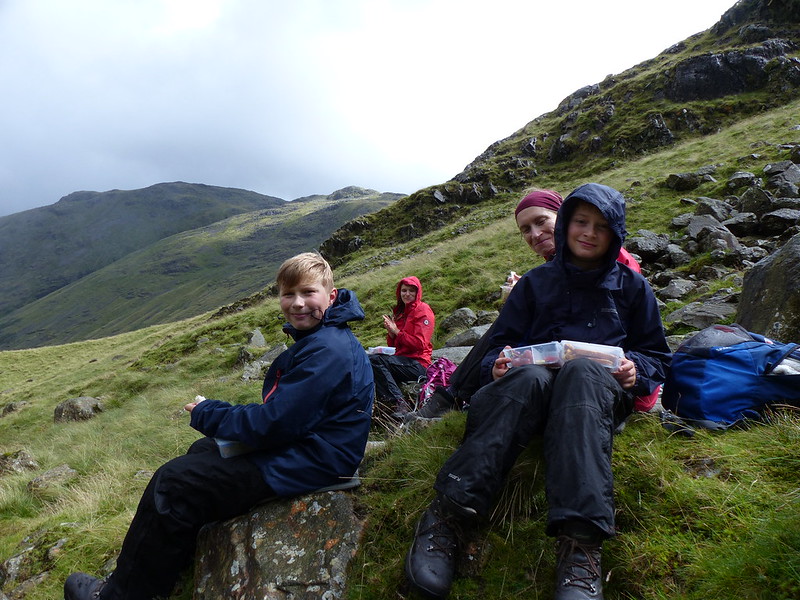 With the weather lifting a little, a view had appeared down to Derwent Water and Skiddaw. 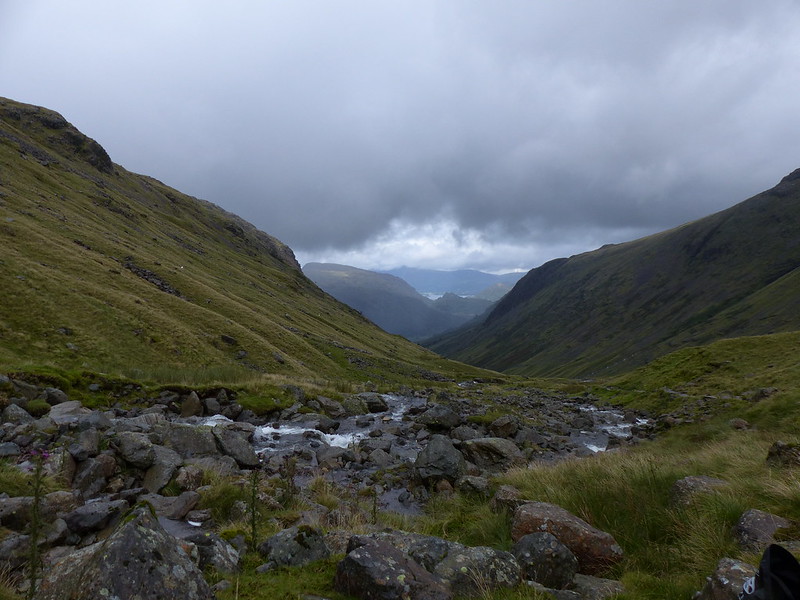 And the changing cloud and patches of sunlight put on a show for us. 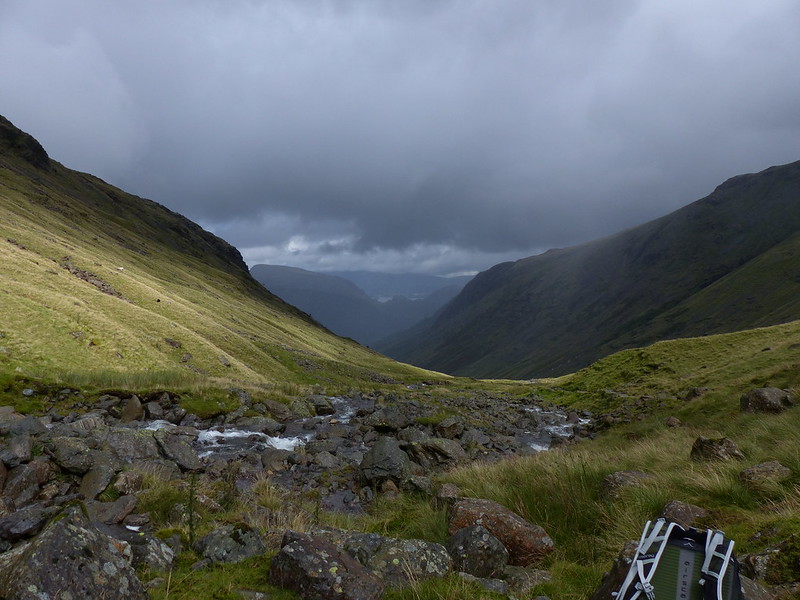 Likewise, up the valley, the mist was still swirling atmospherically around Great End. 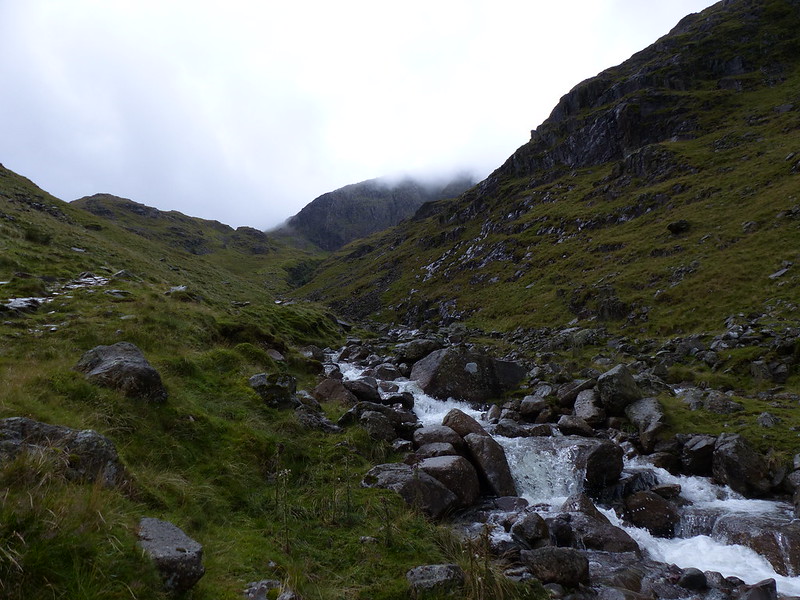 We were moving steadily, but fairly slowly, even by my unambitious standards. When we reached the top of Ruddy Gill I offered the kids the option to divert via Sprinkling Tarn and so considerably shorten the walk, but they were having none of it,  and were all determined to continue to the top. 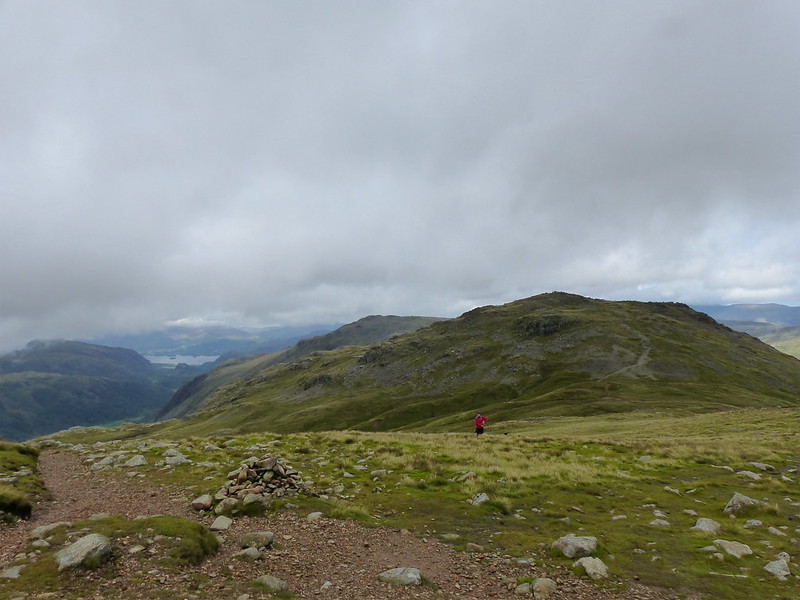 Allen Crags with Derwent Water behind.

When we reached Esk Hause, Esk Pike had usurped Great End as the incredible disappearing hill… 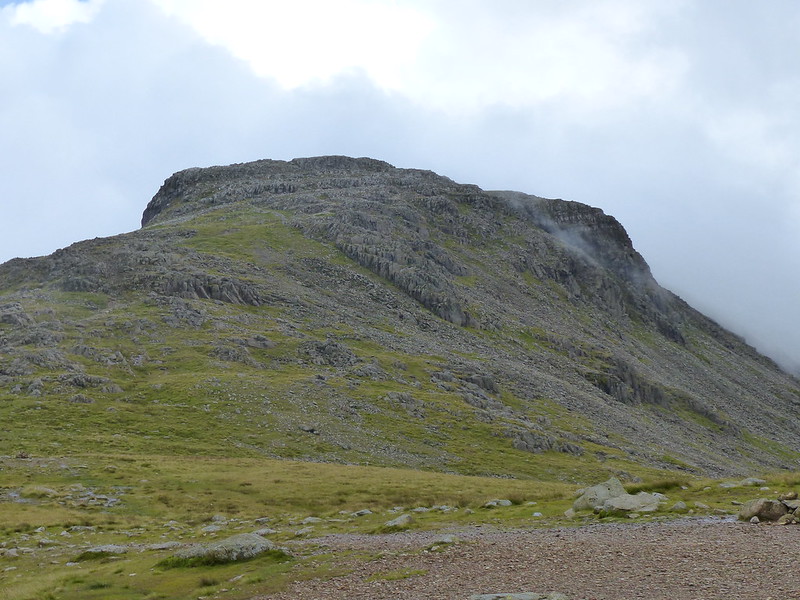 Now you see it… 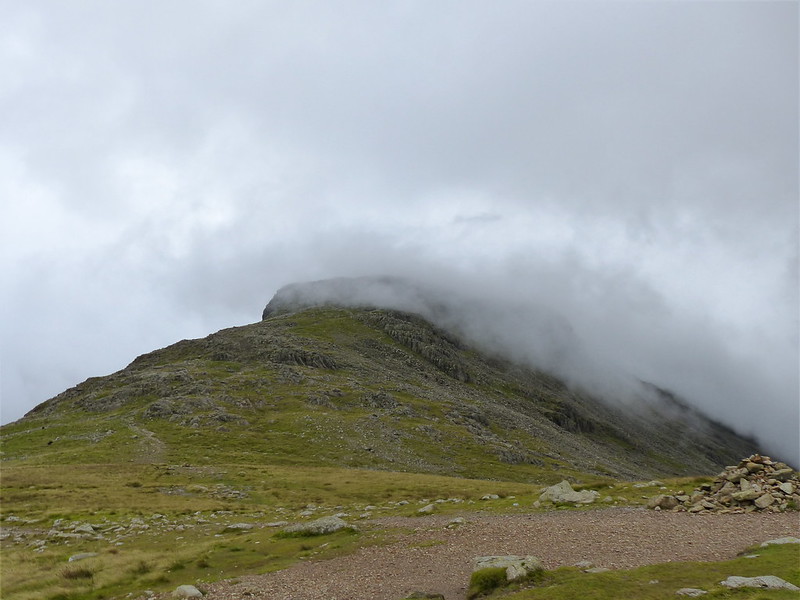 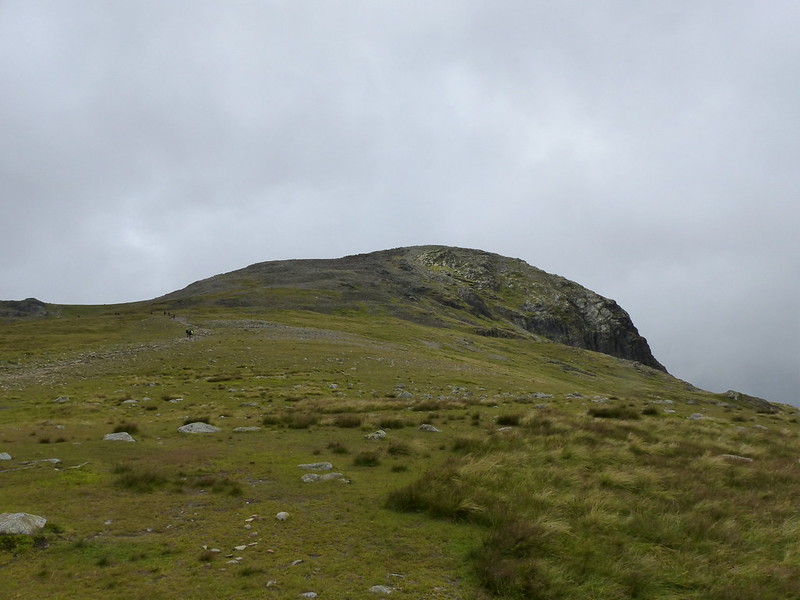 …but the ridge from there, onward over Ill Crag, Broad Crag and Scafell Pike itself remained determinedly hidden…. 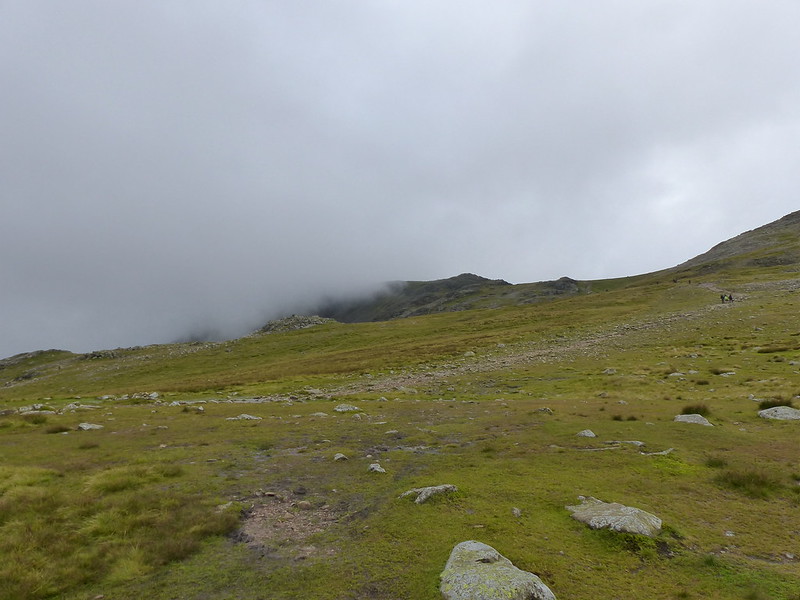 And it stayed that way as we walked along the ridge and up the final pull to the top. In the slight depression shortly before we hit the broad ridge we stopped again for a second lunch, it seeming likely that, in the wind, it would be too cold to stop. Now and again, as we continued, scraps of blue sky appeared overhead and it seemed as if views would soon follow, but it wasn’t to be. The top wasn’t as busy as I’d expected, but there were a fair few people up there and since the wind was indeed very cold, we elected, after a very brief stop, to press on. If anything, as we descended, it seemed that the cloud had lowered further and we didn’t drop out of the fog until we had reached the Corridor Route. 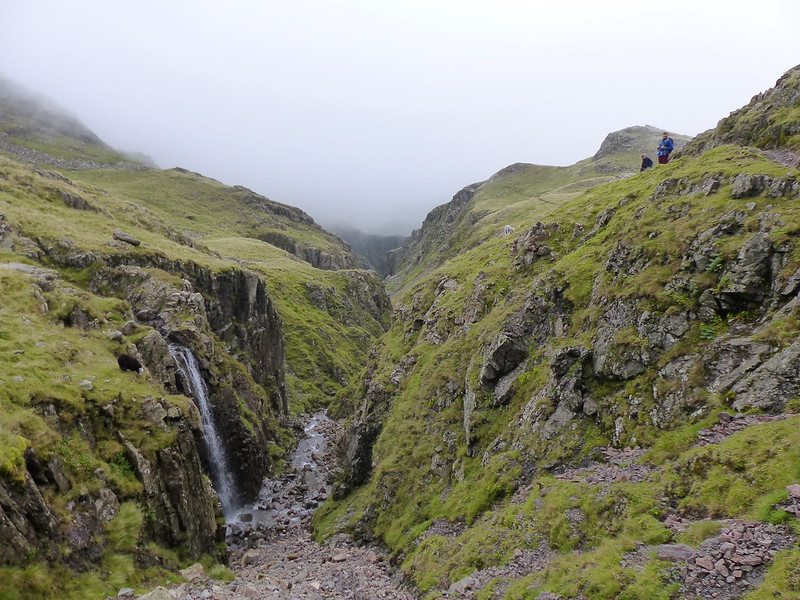 The top of Pier’s Gill.

I love the Corridor Route, for me it’s one of the finest paths in the Lake District, with it’s steep crags and deep-cut gills on all sides, and the patchy cloud didn’t really detract from the drama, although I was glad that we had finally dropped below it. 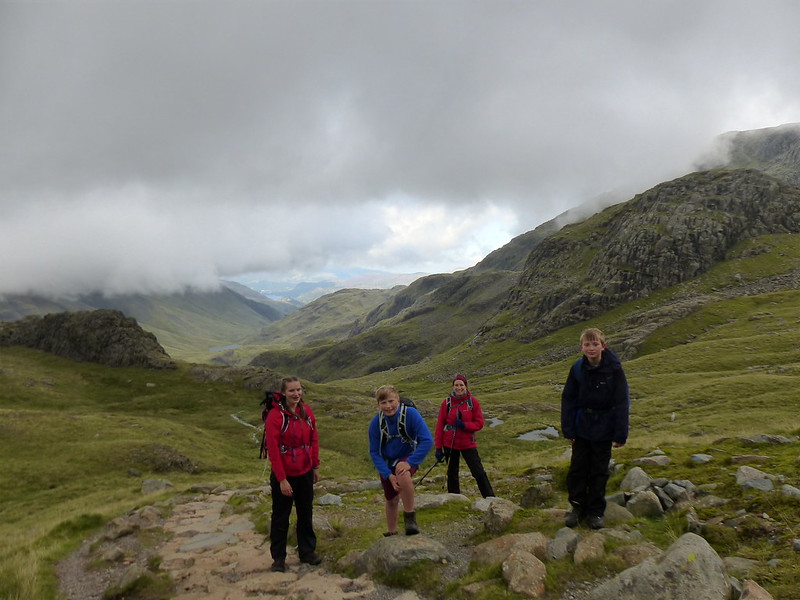 It was pretty late by now, but we had anticipated this eventuality and so, as well as the stove and kettle I often carry for brewing-up, I had a pan, some filled dried pasta (harder to buy these days than it once was, but Aldi stock some) and a jar of pesto. I was surprised by how many other groups were still about on the hills and, as we cooked tea, a party came by and expressed their envy of our impending evening meal. 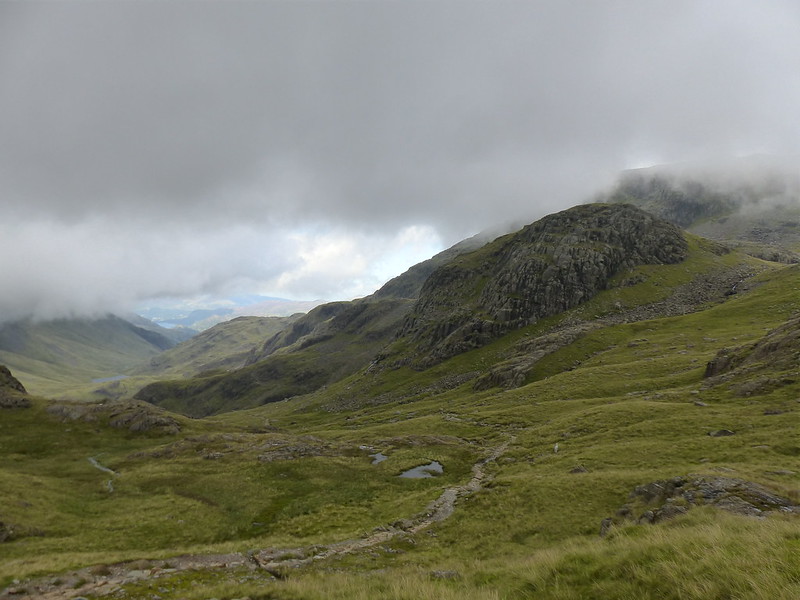 Round How and the Corridor Route.

We descended past Styhead Tarn, Styhead Gill and back via Stockley Bridge, finishing back at Seathwaite in the very last of the light, having completed our roughly 8 mile walk in around 10 hours. So, we hardly set any records fro speed, and I’m not sure either that we will get around to  Ben Nevis or Snowden this year, but we did enjoy a very memorable day.

6 thoughts on “Mean and Moody Weather on Scafell Pike”