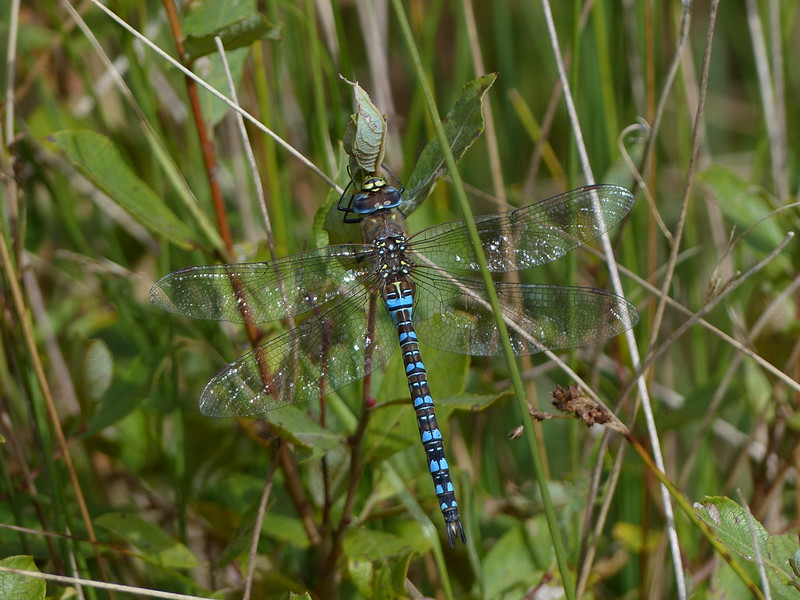 Being the continuing adventures of a taxi-driving Dad.

Last Saturday, B had a rugby match, playing hooker (he’s suitably bonkers) for his school team away at Morecambe High (where, many moons ago, I used to teach). Unlike some of his contemporaries, B doesn’t seem too concerned about whether his team win or lose, just so long as the result seems fair, and at the end of the game declared: “That was fun!”, despite his team having taken a bit of a hammering.

Afterwards, we dashed home, but, in my case, only for a quick turn around, as I took Little S to a nerf gun birthday party in – guess where – Morecambe. I realise that the rational thing to do would have been to take both boys to both events, but it seemed easier at the time to do it this way. With S dropped off, only a few minutes late for his war game, I had the best part of two hours to kill and decided to go hunting for one of the three Wildlife Trust reserves which I knew to be somewhere around Heysham. Idiotically, I hadn’t checked the exact locations in advance, so resorted to driving around, with more hope than confidence, until I spotted a likely looking car park and found that I had stumbled upon Middleton reserve. 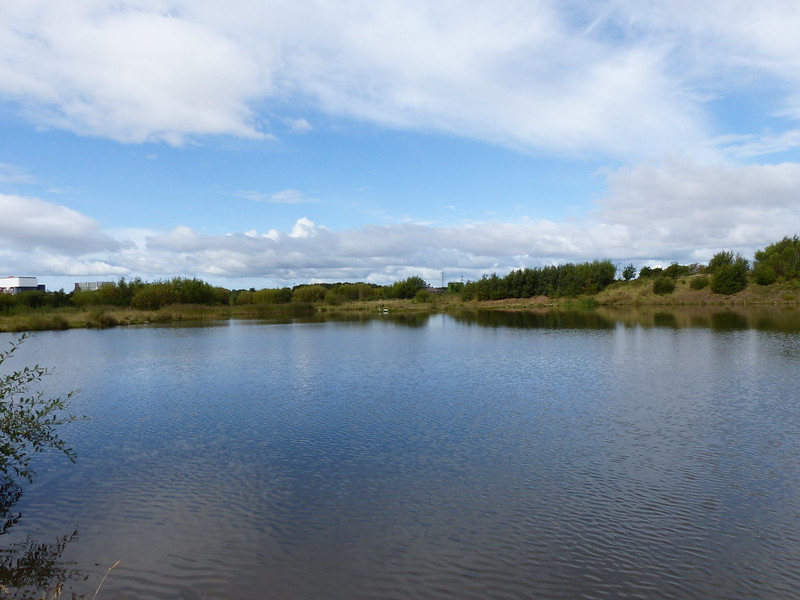 After a bite of lunch, and whilst walking around the reserve, I met a man who told me that he remembered when this was the site of a petrochemical plant. Now it has two large ponds and a mixture of meadows and scrub. 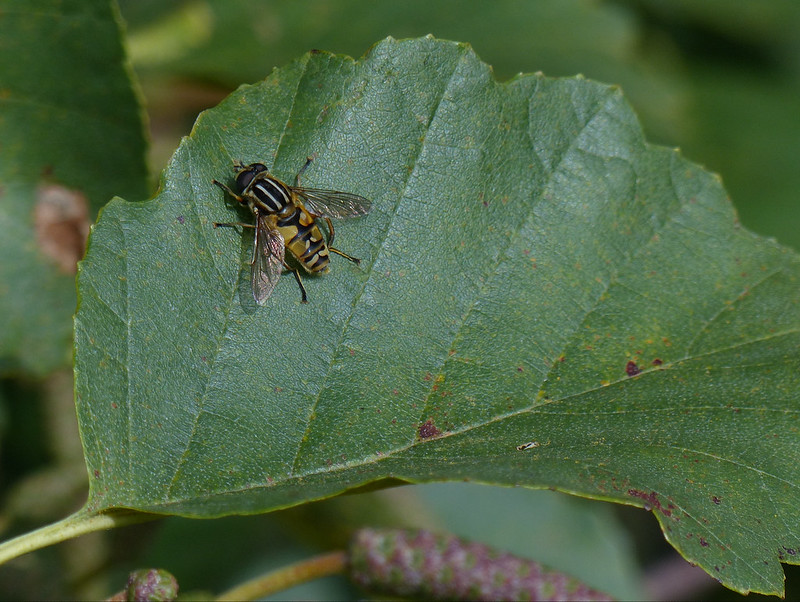 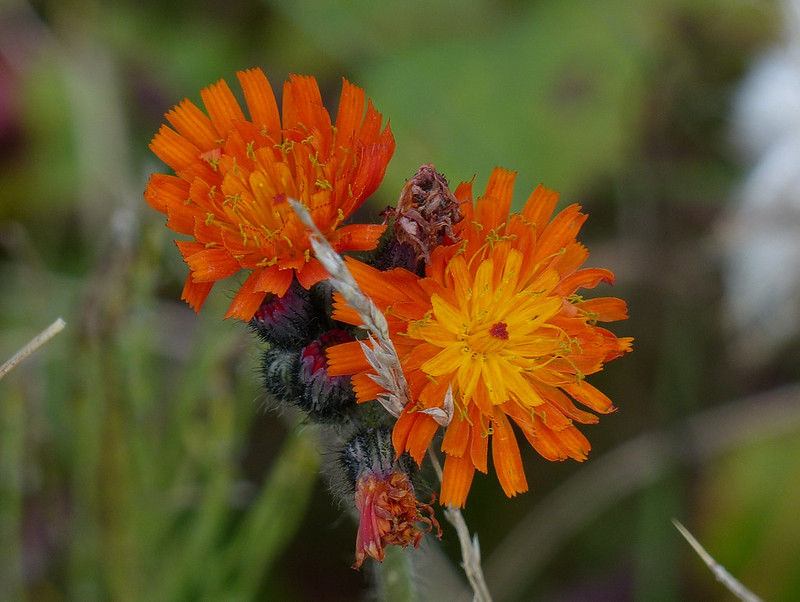 This patch of waste ground maybe a tad unprepossessing at first glance, but look a little closer and there is a great deal to enjoy. I was very much put in mind of Richard Mabey’s marvellous book The Unofficial Countryside, which is about how nature, left to its own devices, can reclaim scraps of once industrialised land like this.

The sun was warm and there were no end of dragonflies about, although few of them would pose for a photo. 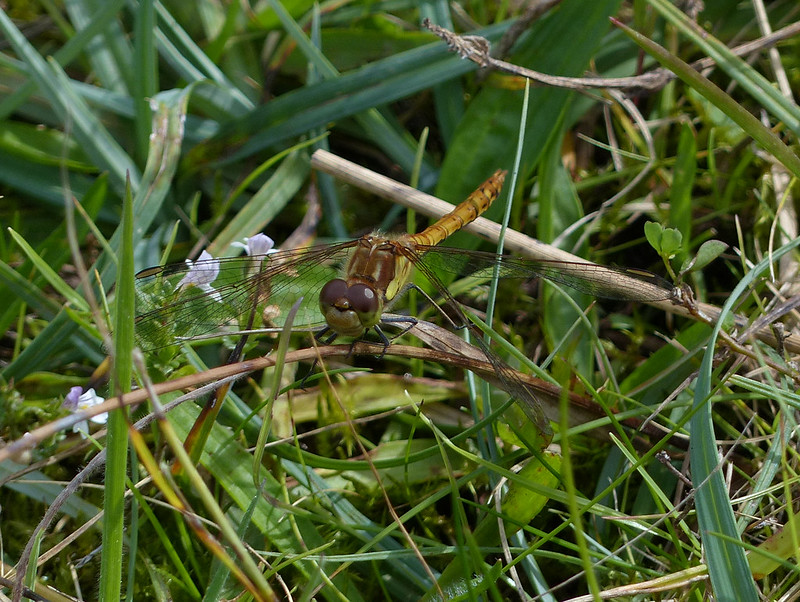 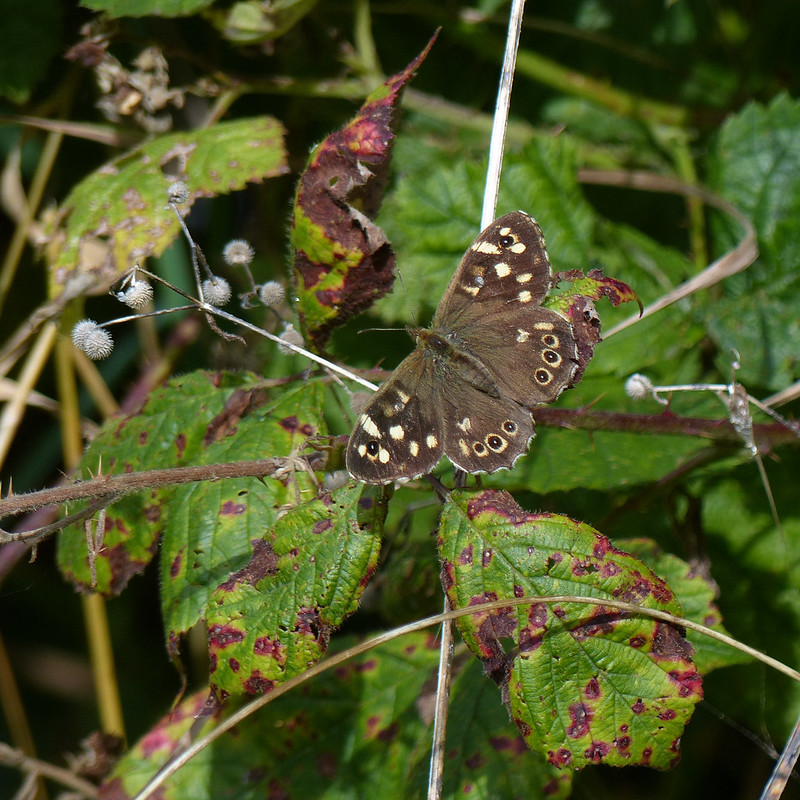 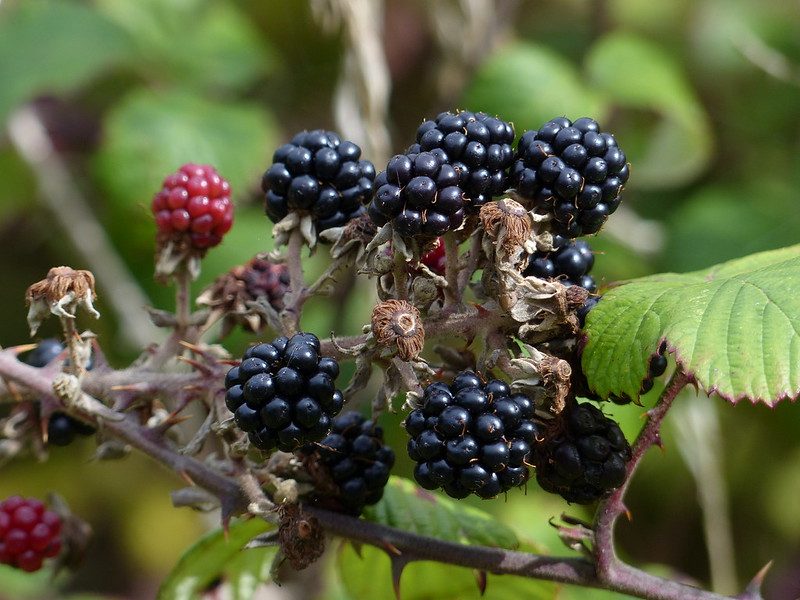 There were lots of flowers still in bloom and it was obvious that, had I had been here earlier, in the summer, there would have been even more to see. 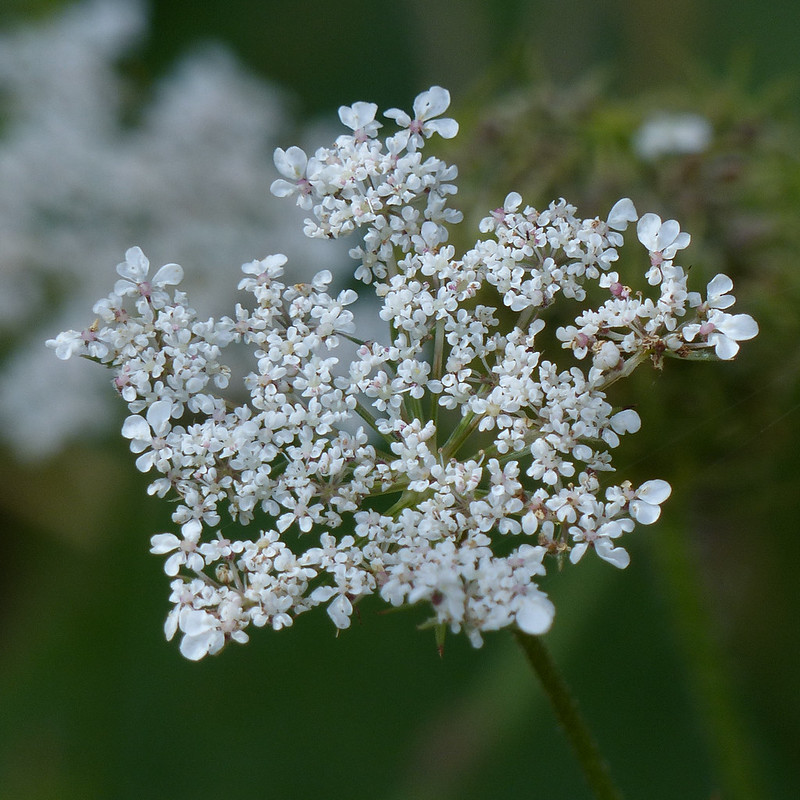 Wild Carrot, the ancestor of all domestic carrots. 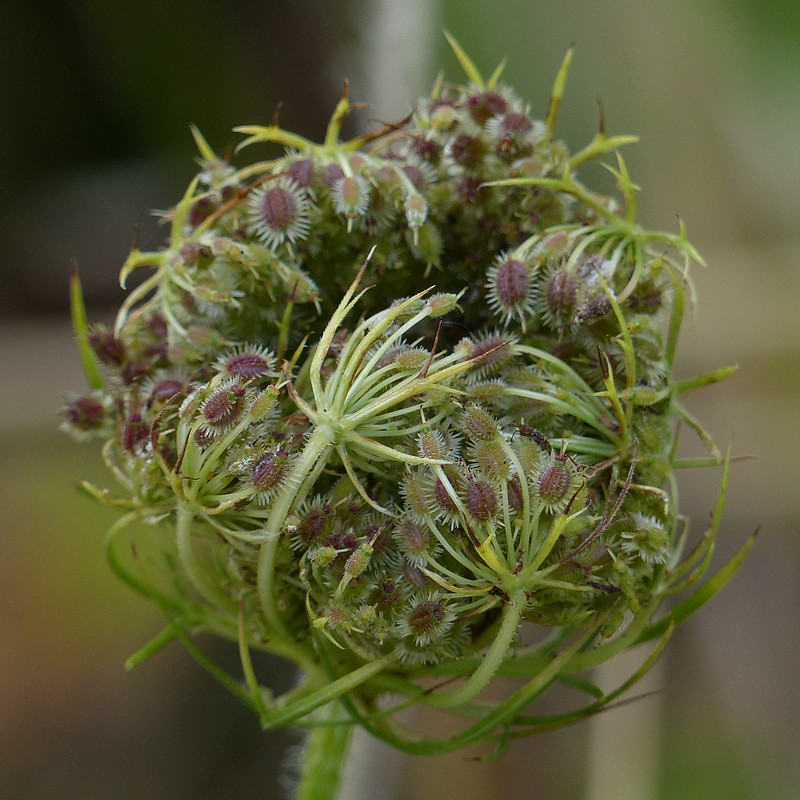 When the flowers turn into spiny seeds, the umbel curls in on itself. 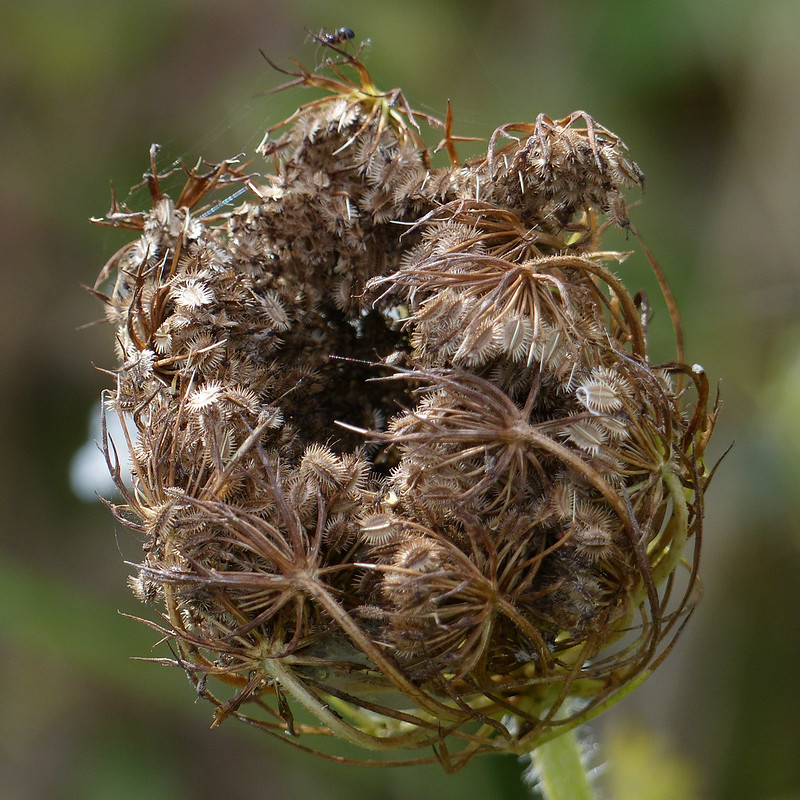 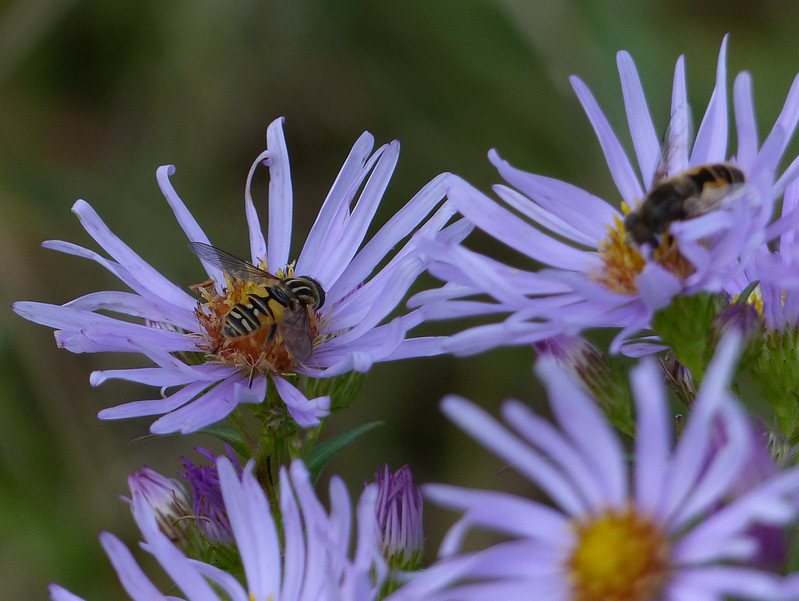 More hoverflies on what I assume are Michaelmas Daisies. 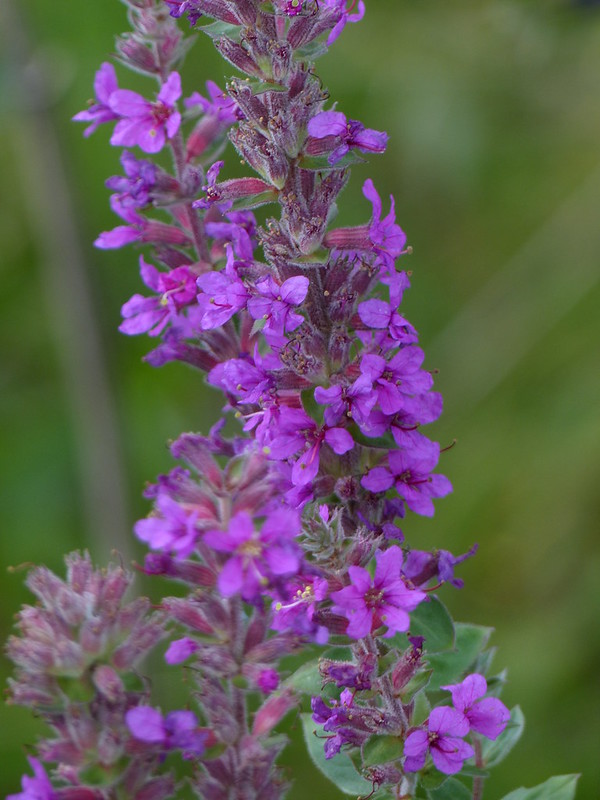 I could hear the contact calls of small birds from all sides and, with lots of teasels and other tall seed-heads about, I wondered whether they might be Goldfinches. Eventually, they flew across the path ahead of me, then settled above me, on teasels growing on a high bank. Here’s some of them… 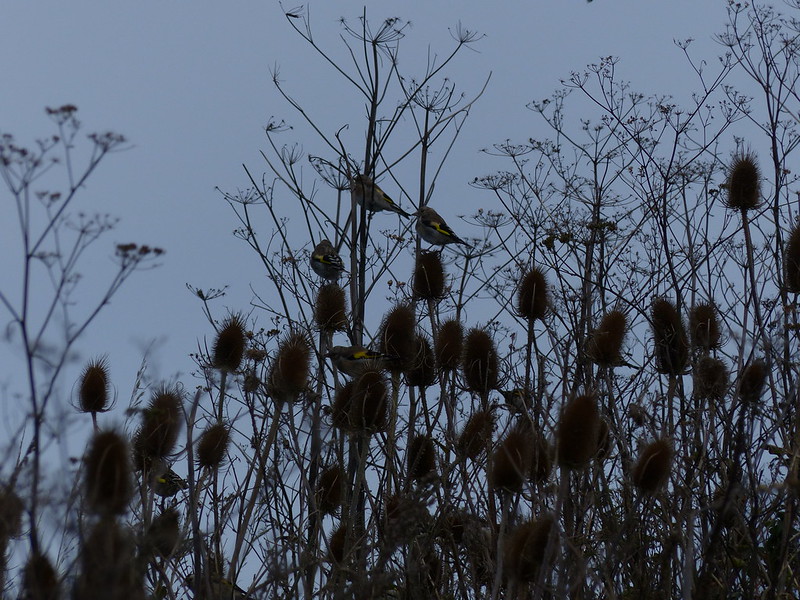 The photo didn’t come out brilliantly and only a small part of the charm are here, but the flocks of Goldfinches which gather at this time of year are delightful, so I wanted to include the photo anyway. 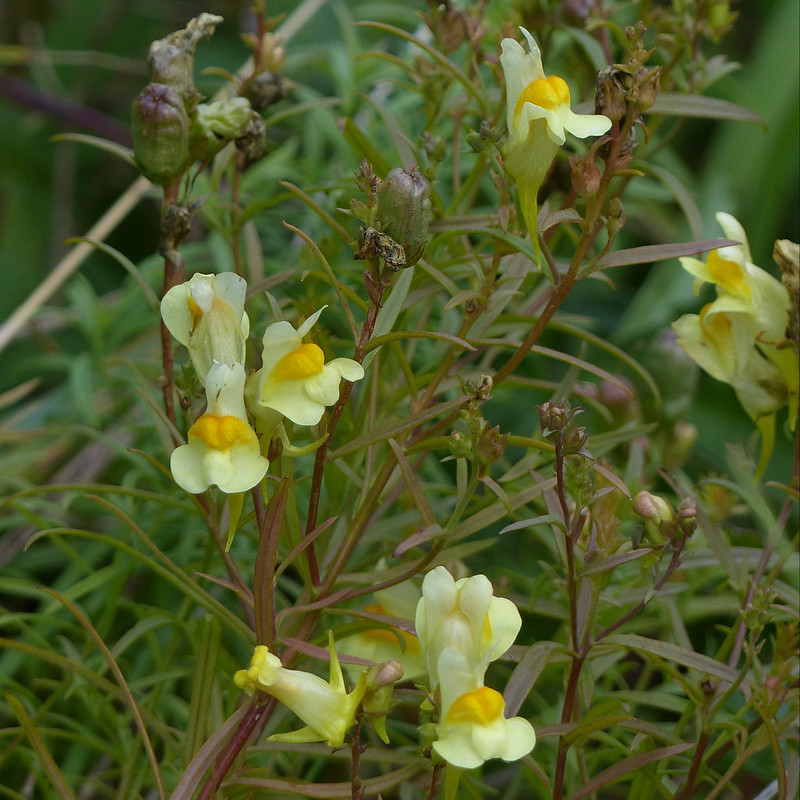 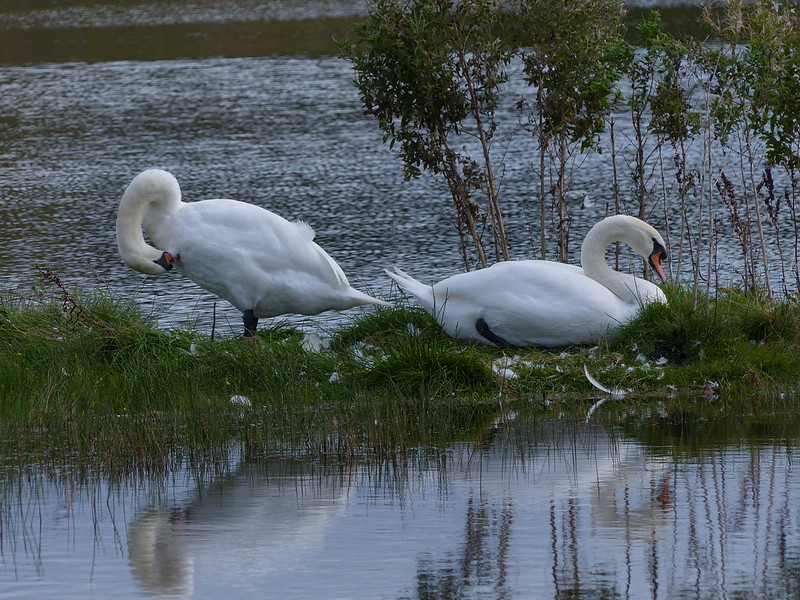 Mute swans – could they still be nesting in mid-September? 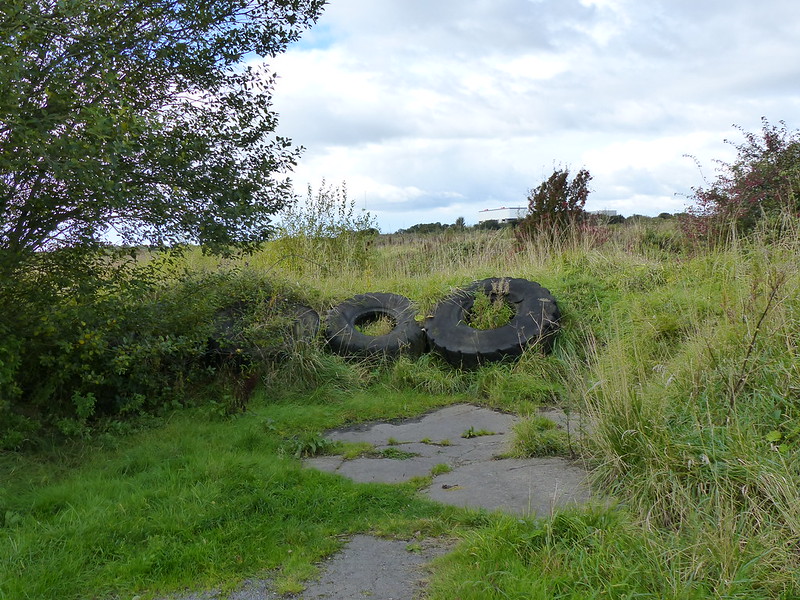 There were plenty of half-hidden reminders of the areas past – the remnants of tarmac covered surfaces, these huge tyres, odd bits of buildings here and there, but they mostly seem to be slowly disappearing. 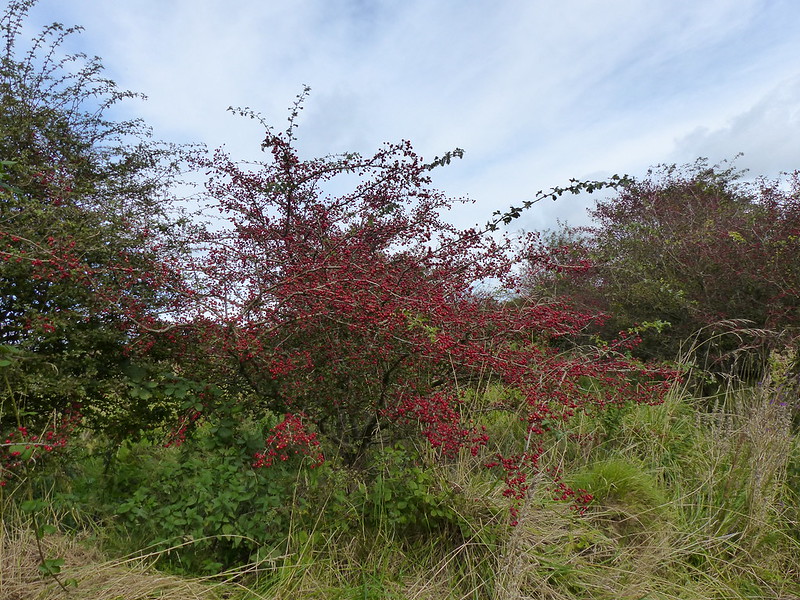 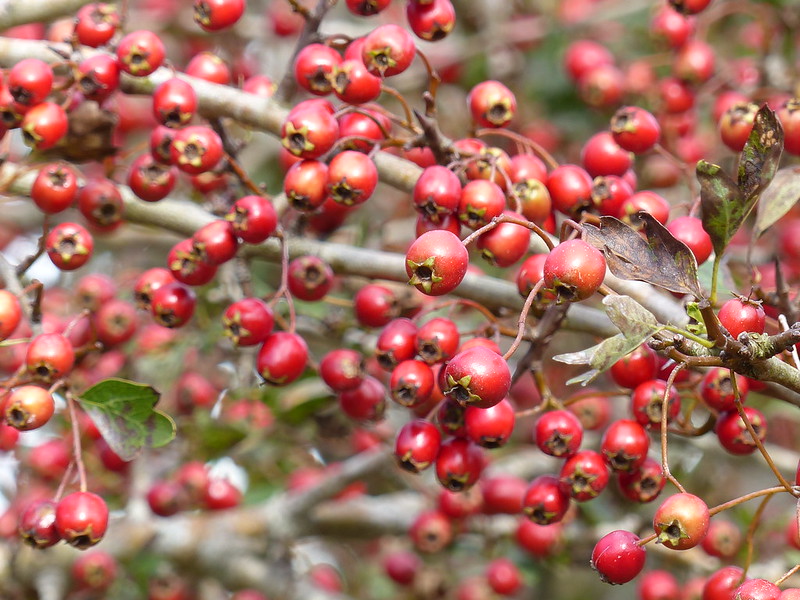 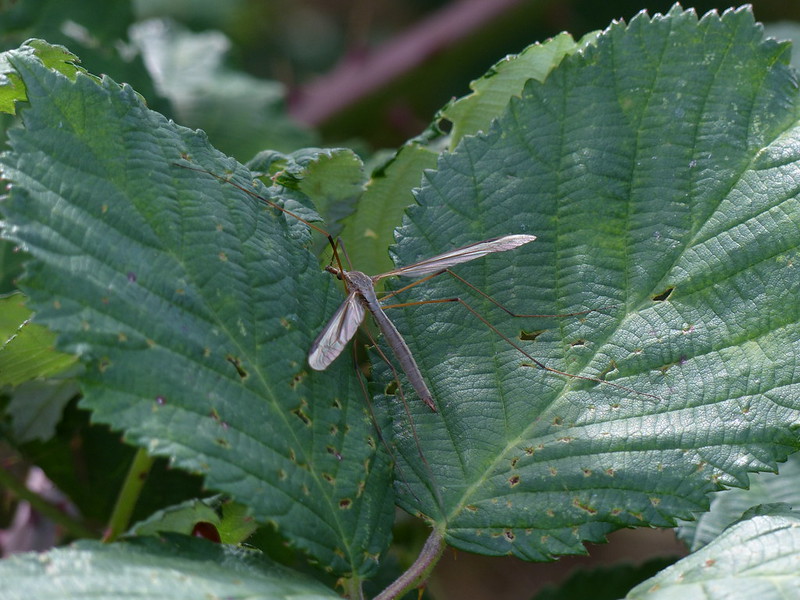 A blade of grass apparently dancing in a way completely contrary to the direction of the wind alerted me to this spider, which was busy constructing a web. 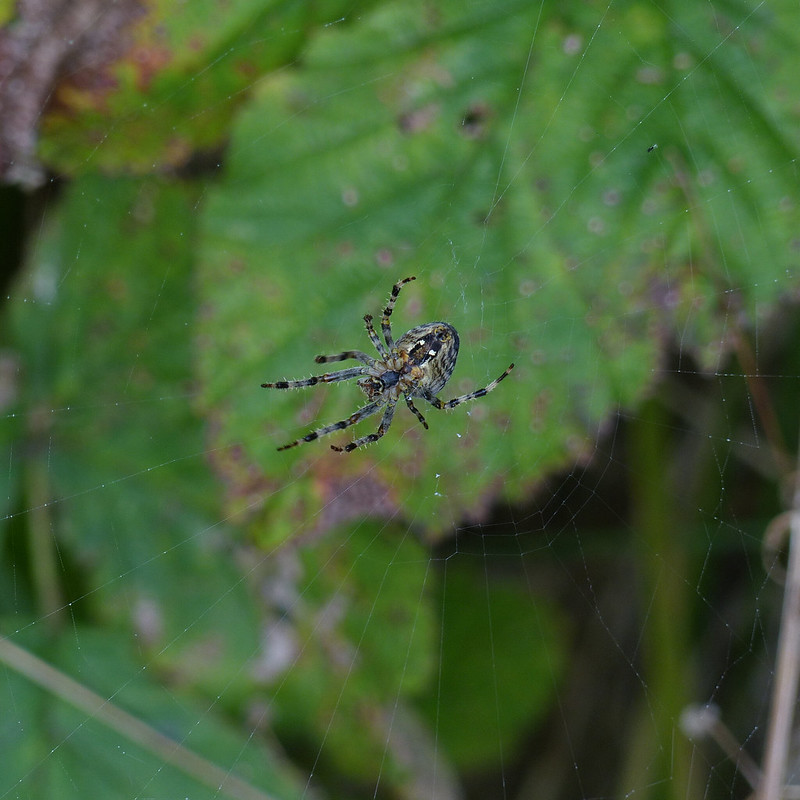 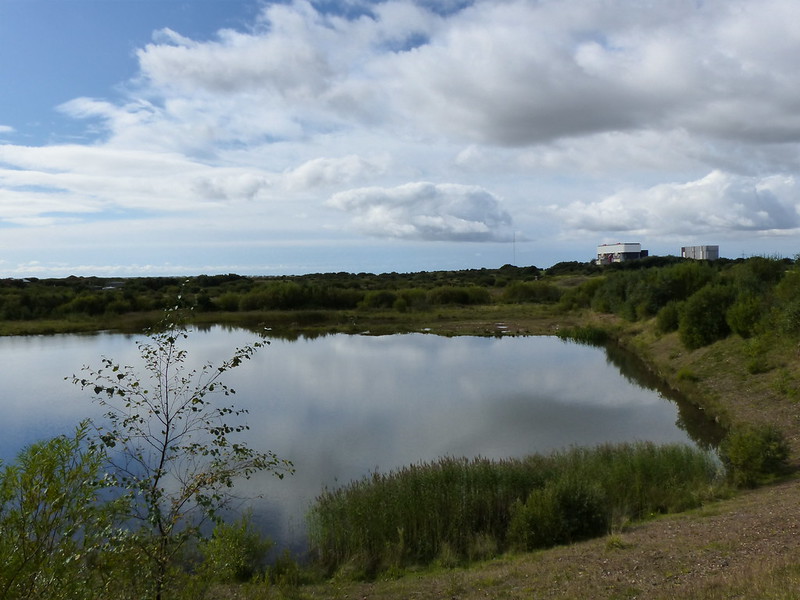 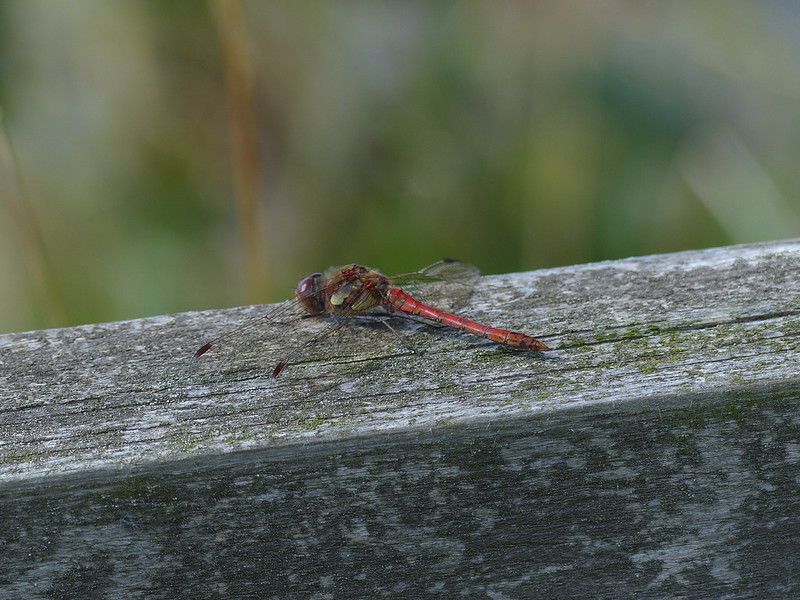 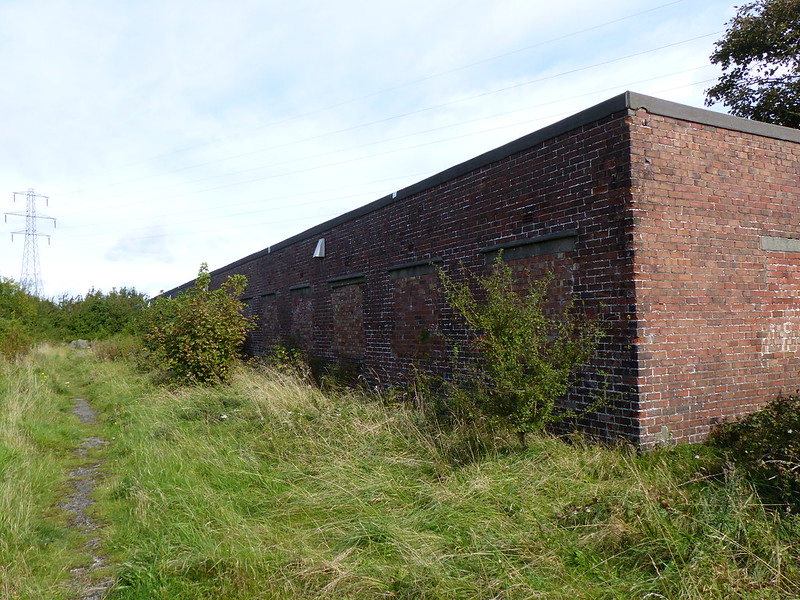 As I came to the end of my walk and was running out of time before needing to head off to pick up Little S, I came to a really sheltered spot where, not only were there even more dragonflies, but, in addition, the Common Darters were sunning themselves in obvious spots, as seems to be their wont. 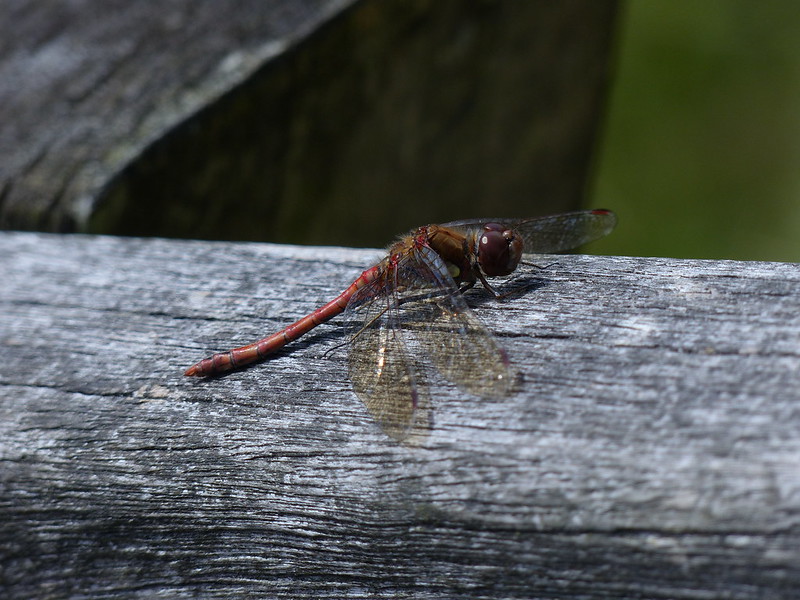 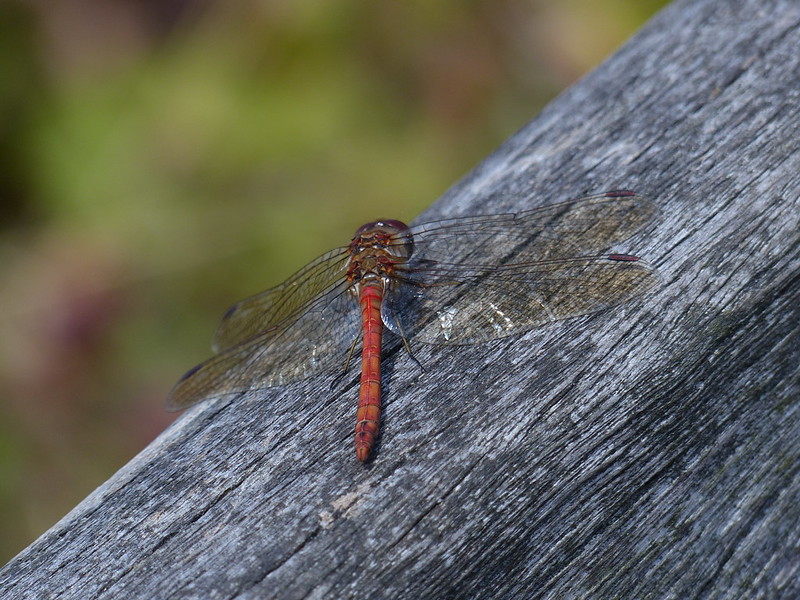 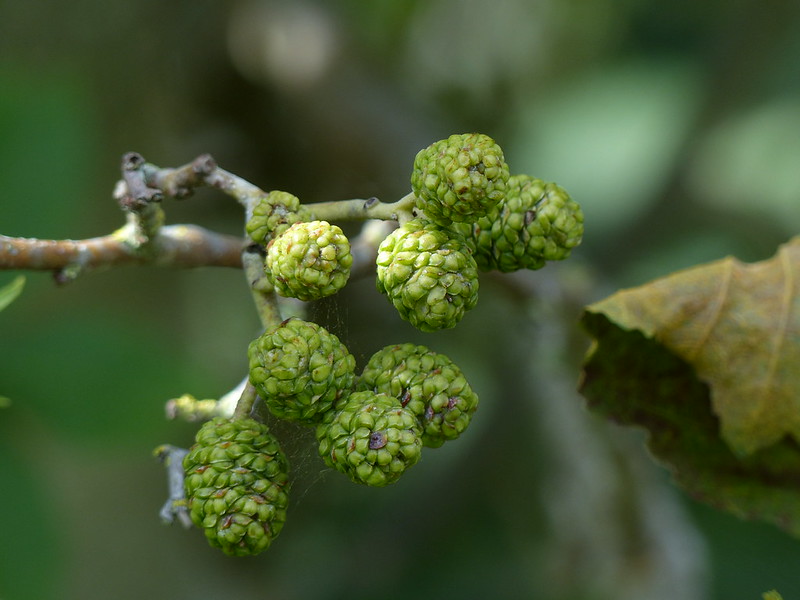 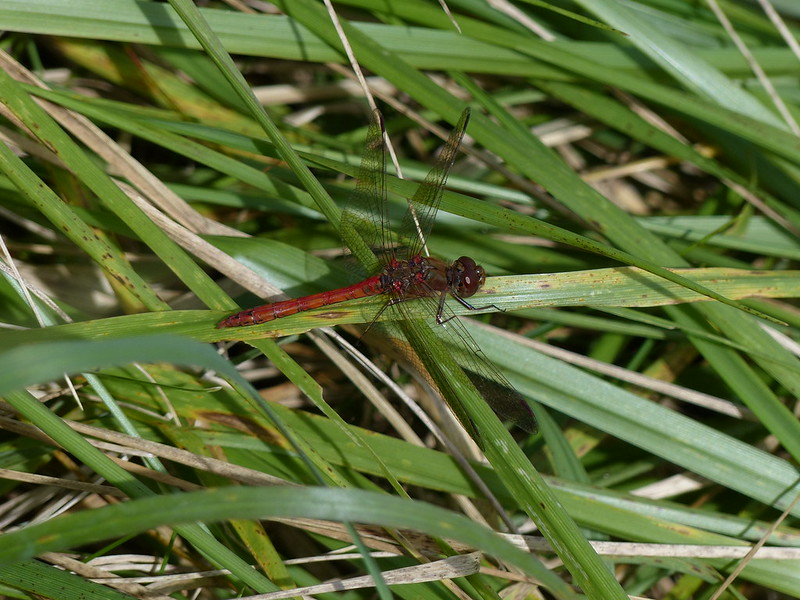 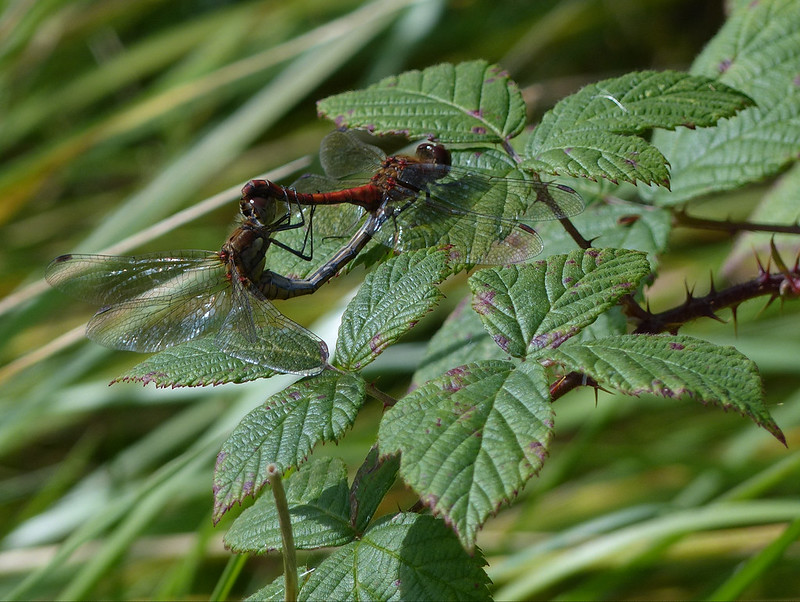 Mating Common Darters. I’ve been confused in the past by the colour of females like this one, expecting the females to be yellow, but this pale blue colour is apparently typical of older females. 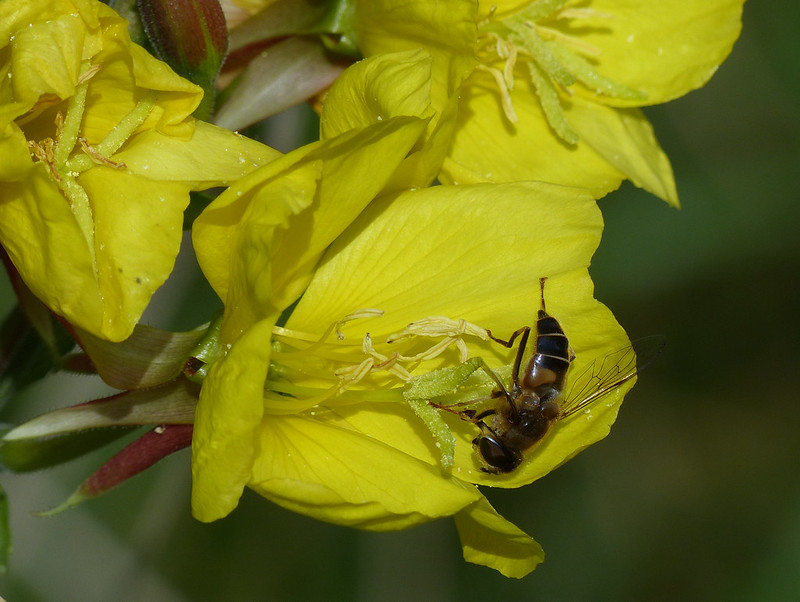 Drone fly, or something similar, on Evening Primrose. 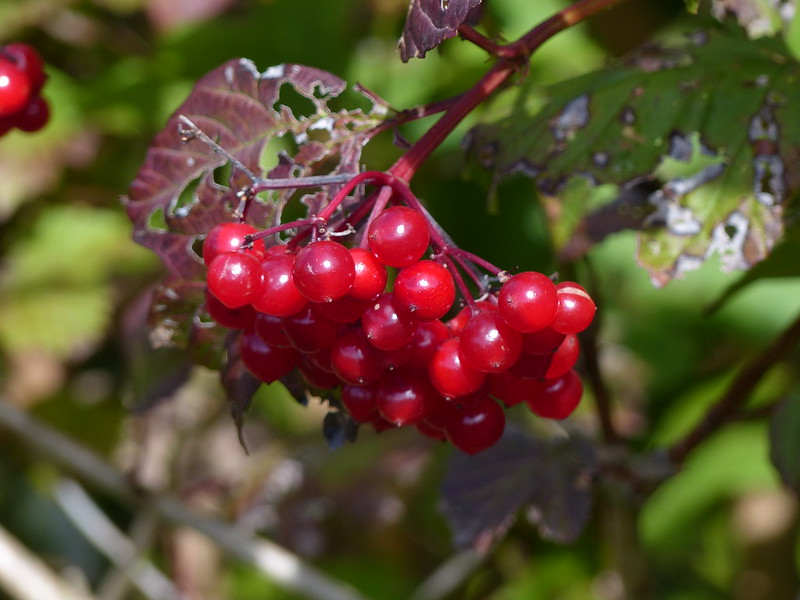