Or: Three Brews with Views. 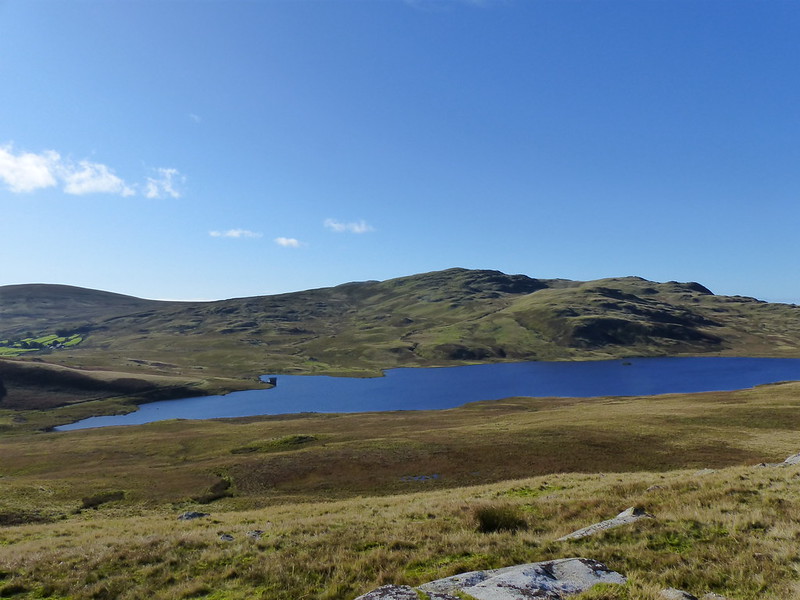 It was our turn to do Kitchen Duty at rugby and TBH offered to go in my stead. I didn’t need to be asked twice. The MWIS forecast gave hill fog, with the best chance of some sunshine in the west, so I drove out to Ulpha in the Duddon valley and then up to park on the Birker Fell Road. Pike How, just above the road is a marvellous view point and one to bear in mind for future reference. It didn’t take long to reach Rough Crag either and I found a comfortable spot out of the chilly wind blowing from the north… 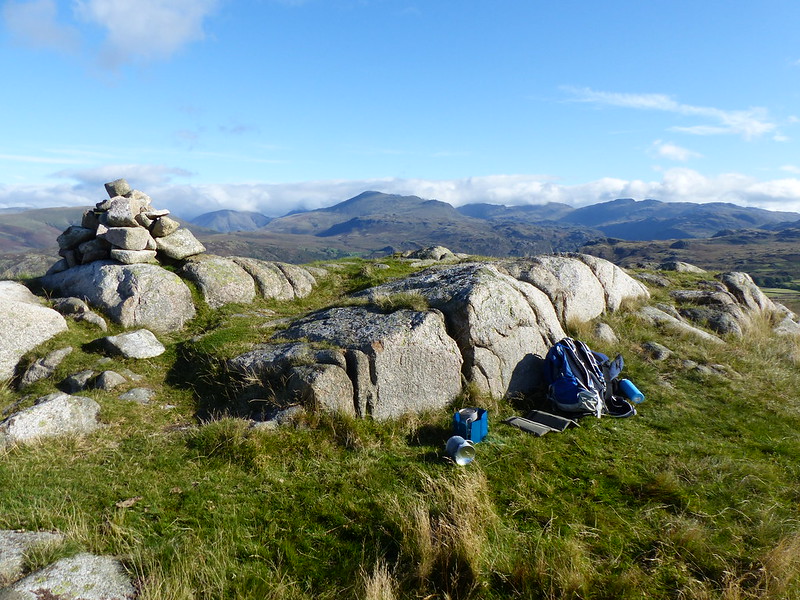 …and settled down for an early brew stop. 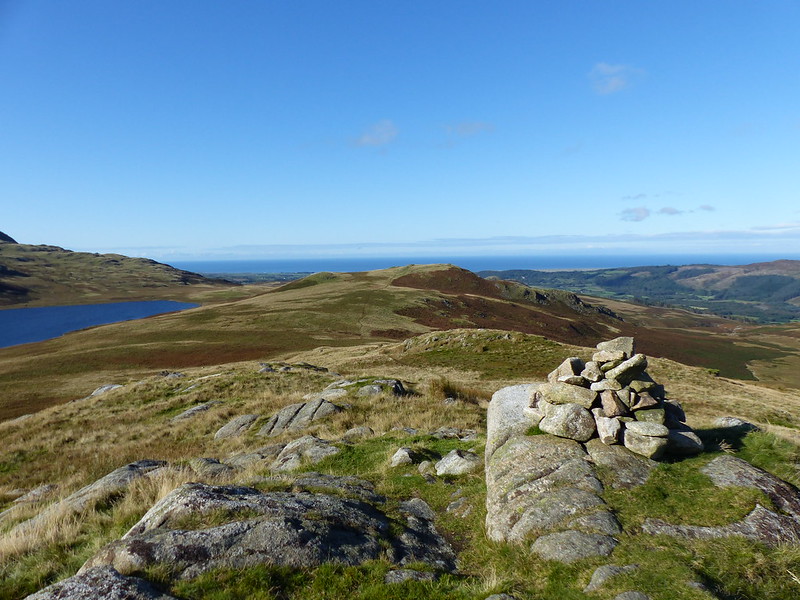 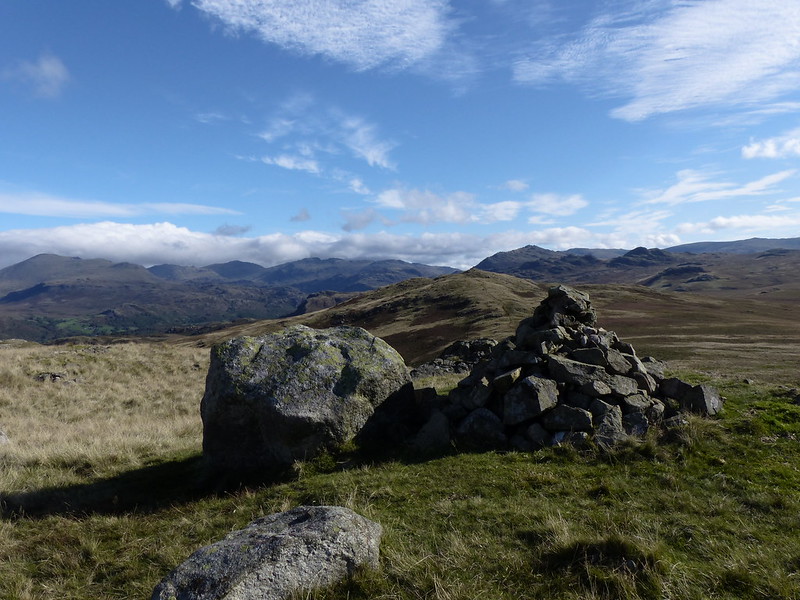 Looking back to Rough Crag from Water Crag. 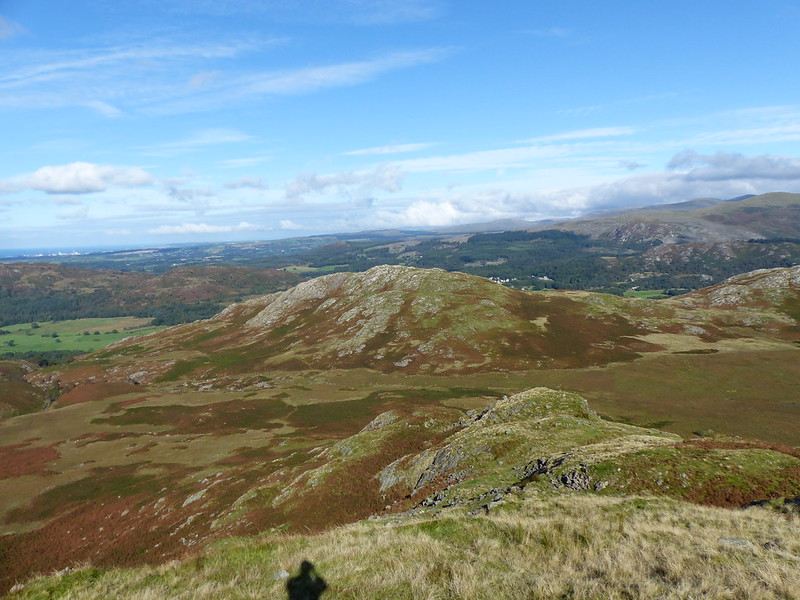 This rocky little knoll is Brantrake Crags. It’s off modest height and probably doesn’t appear in any guide books anywhere, but I thought it looked worth climbing. The stream beside it, Linbeck Gill, which drains Devoke Water, also looked like a good place to explore.

After Rough Crag and Water Crag, Birkett suggests a lengthy traverse to take in The Knott. For once, I’d done my research in advance and discovered that Wainwright, in his Outlying Fells book, has a separate walk which takes in the Knott, but also the ancient settlement at Barnscar and the waterfall of Rowantree Force. That seemed like a more sensible option to me, so I skipped The Knott and climbed directly to White Pike. After the previous two, very easy, ascents, this one seemed like a long way. It was well worth it though. The prominent cairn… 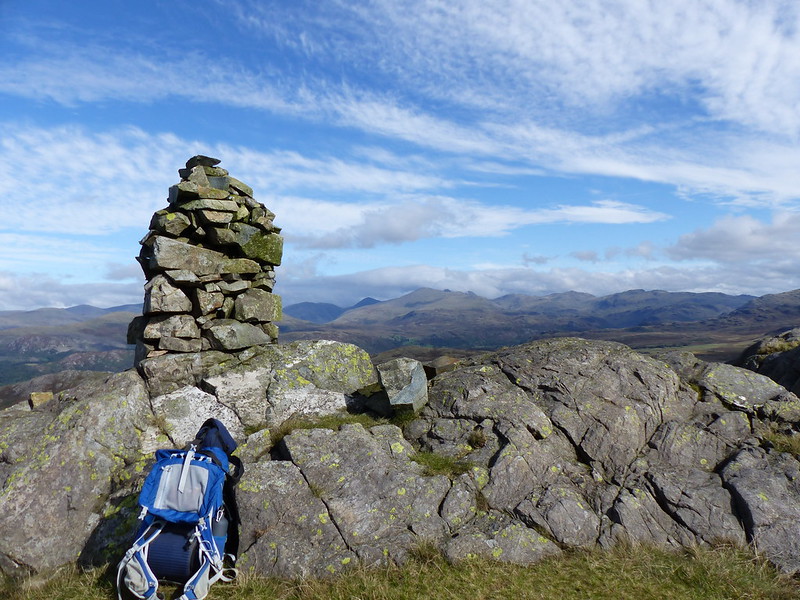 …marked a spot with excellent views. 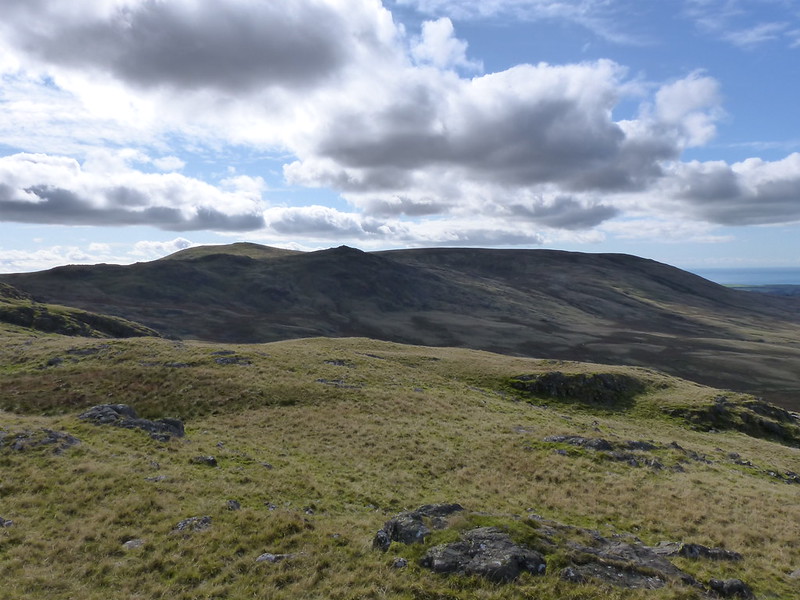 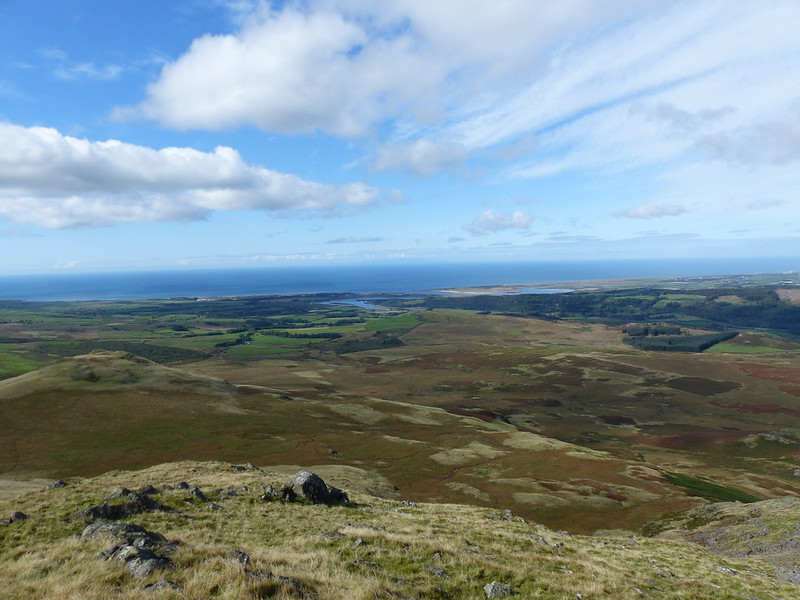 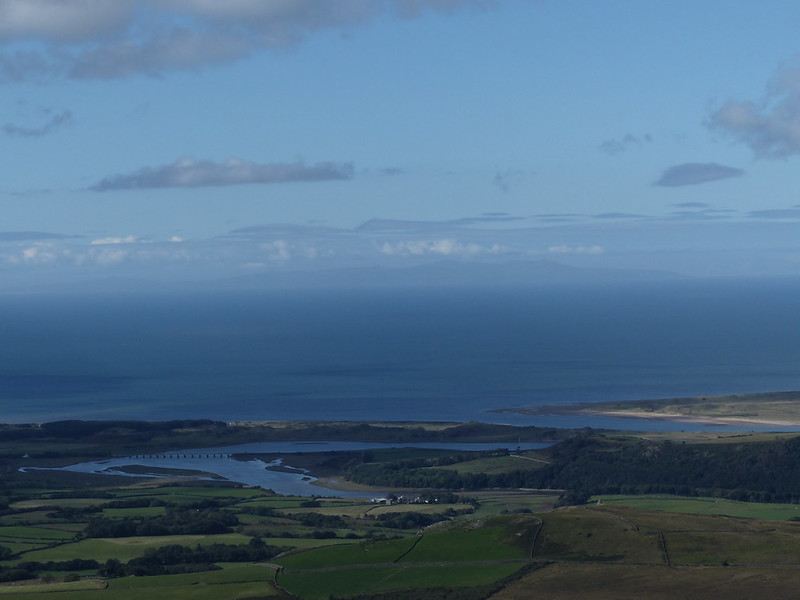 Eskmeals viaduct and Isle of Mann. 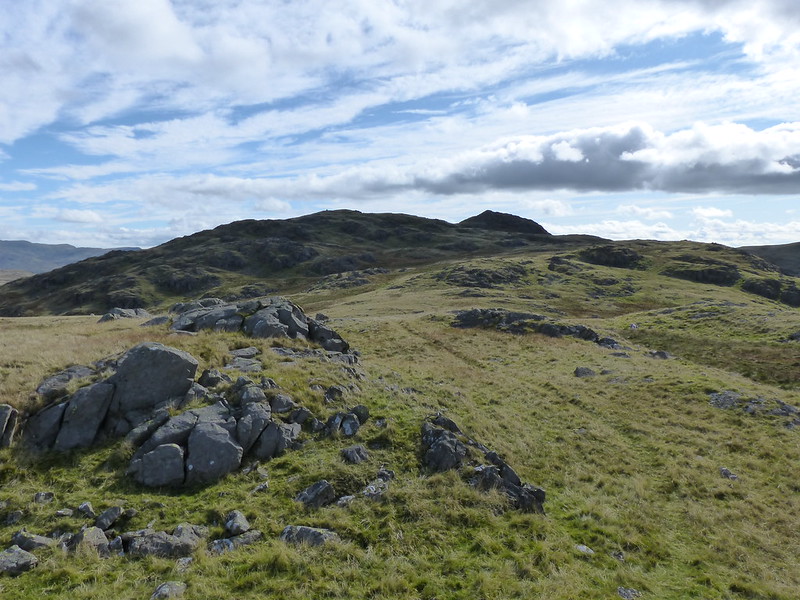 All of the peaks on this walk had stunning views. I’d be hard-pressed to pick a favourite, but Woodend Height would be hard to beat; from it’s top you can have great fun picking out all of the big hills of the western Lakes, across Devoke Water. 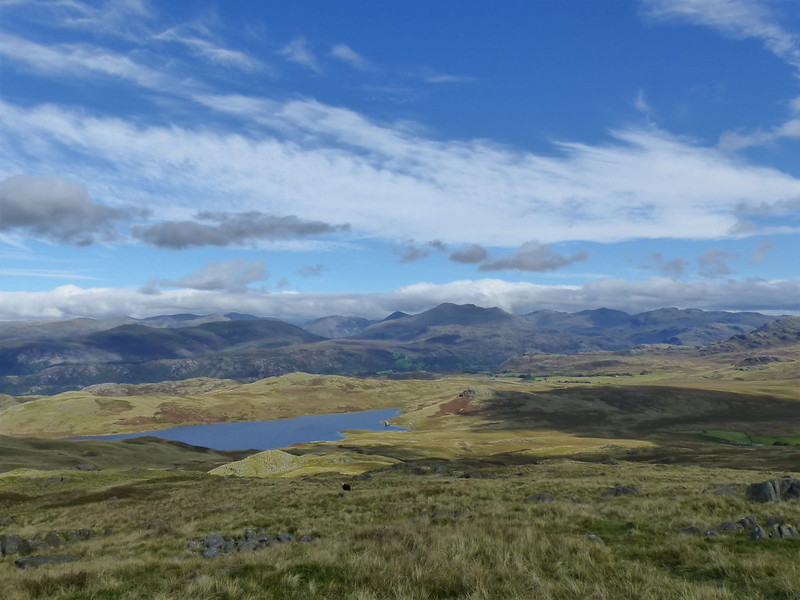 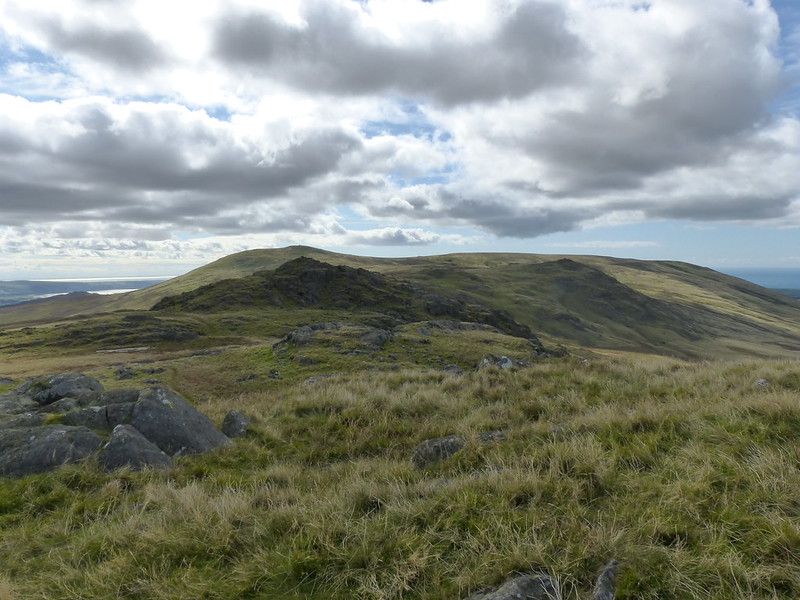 Aside from the minor difficulty of surmounting a wire fence with a top strand of barbed wire, the walk around to Stainton Pike was delightful. This was yet another good view point. 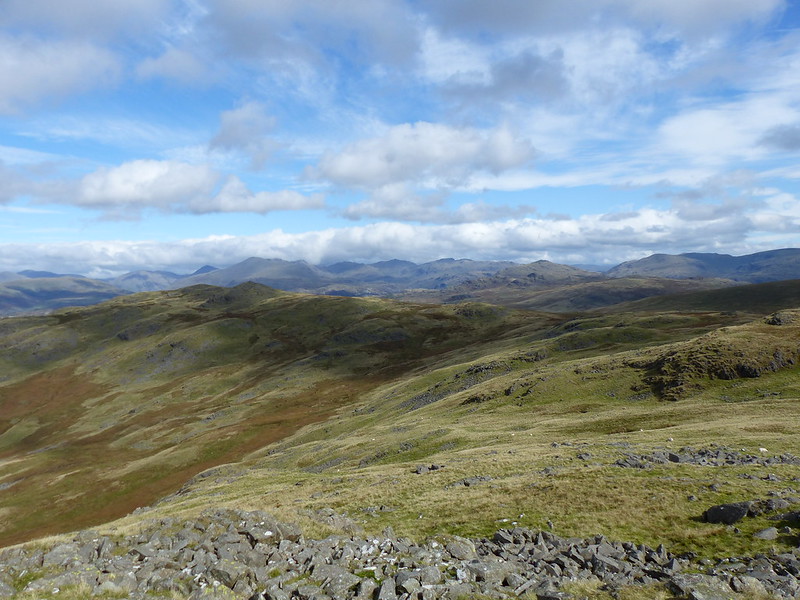 Looking back to Yoadcastle from Stainton Pike. 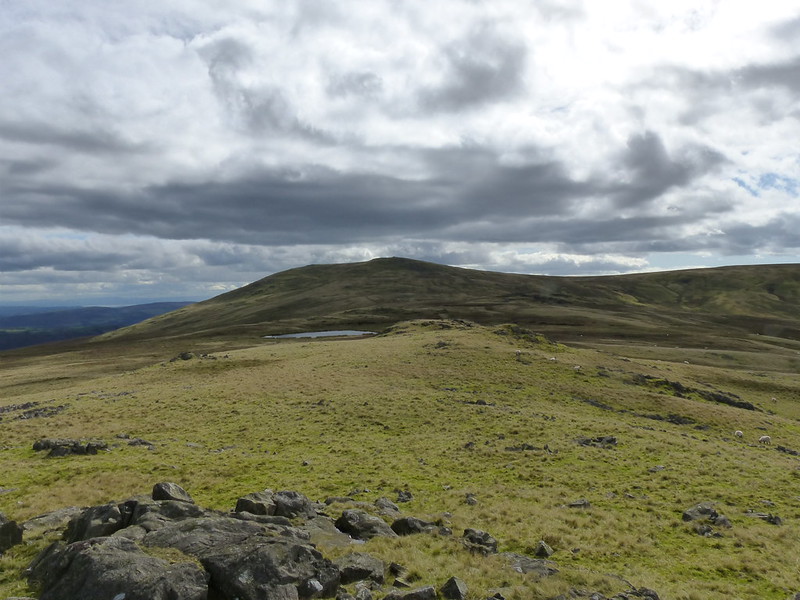 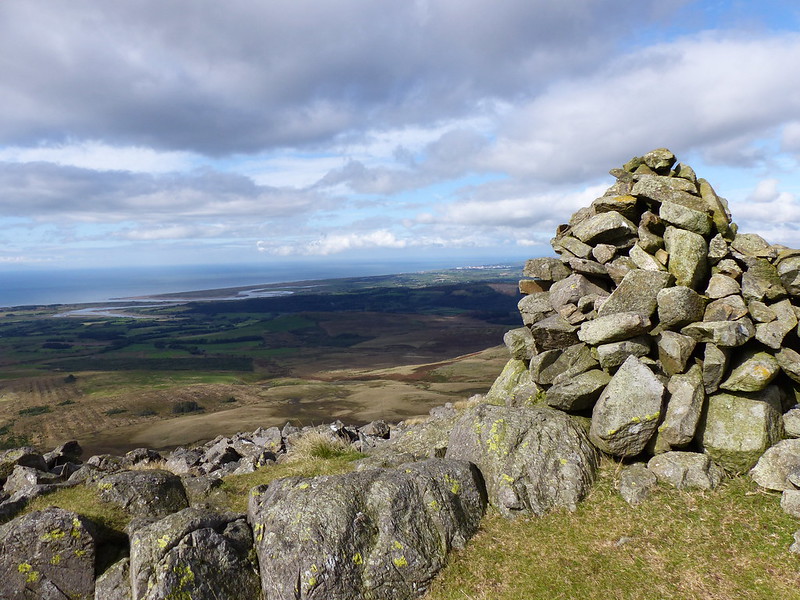 The estuaries of the Irt and the Esk from Stainton Pike.

It seemed like another brew was in order, and I found a wonderfully sheltered spot to sit to enjoy it. 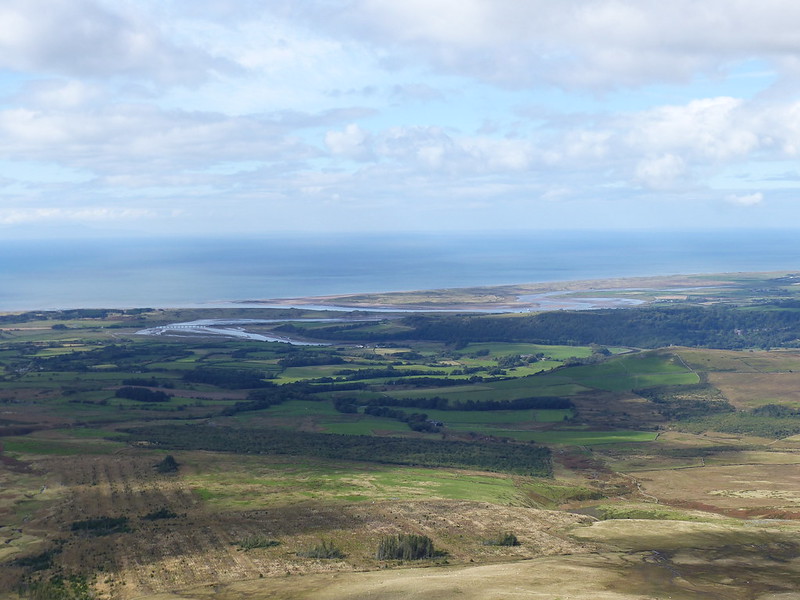 The Irt and the Esk and the dunes of Drigg nature reserve. 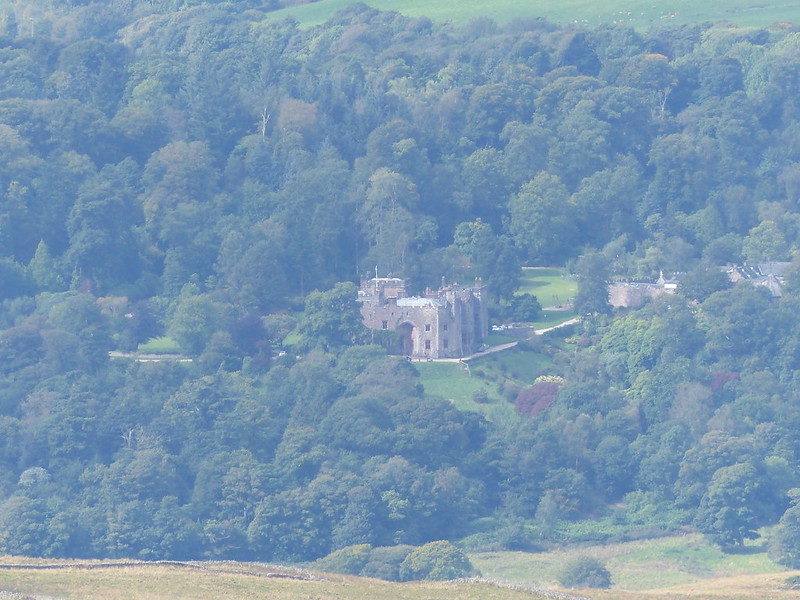 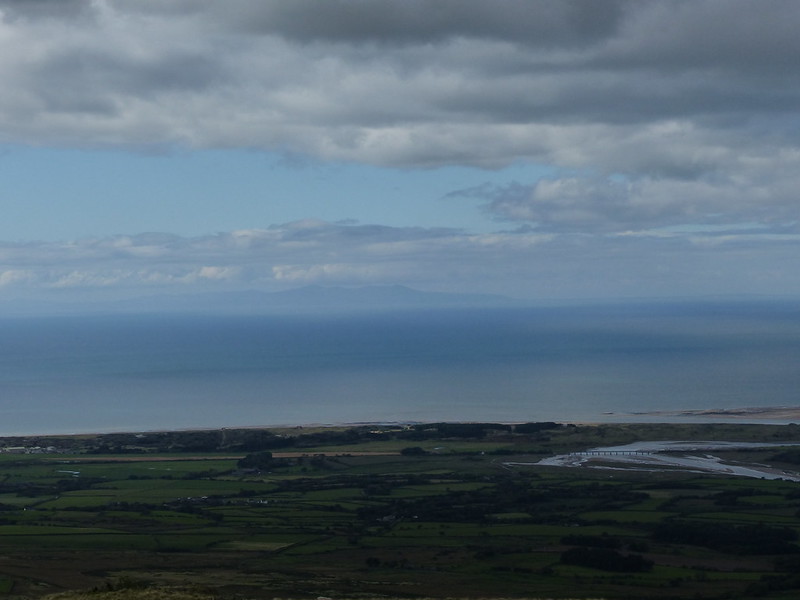 Isle of Mann and Eskmeals viaduct.

From there then, on to Whitfell. 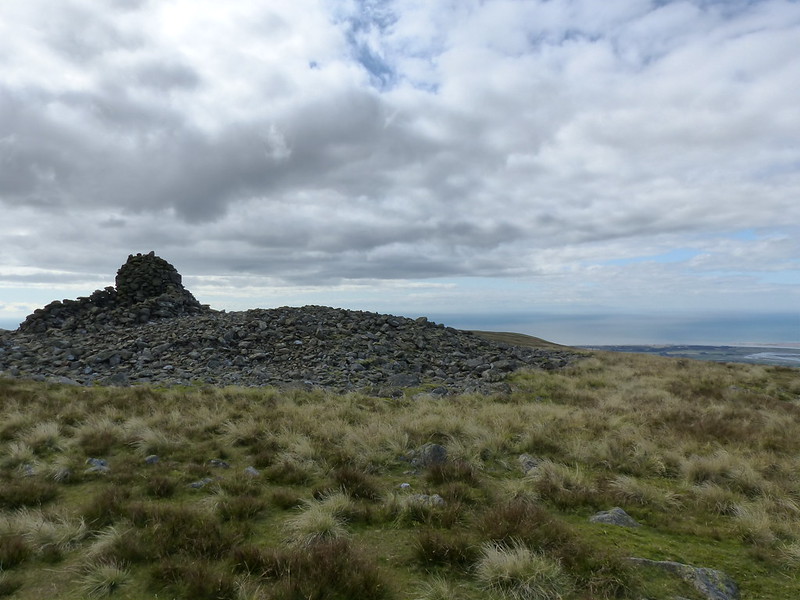 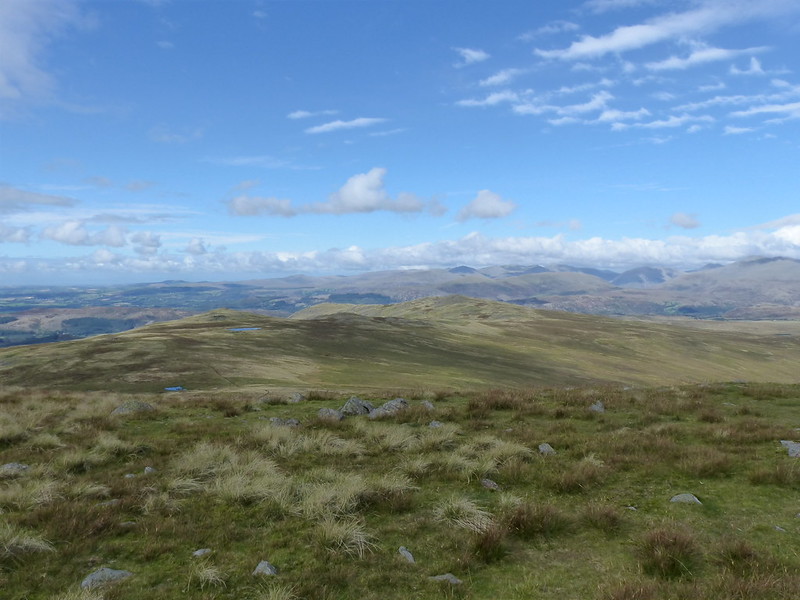 Looking back along my route. 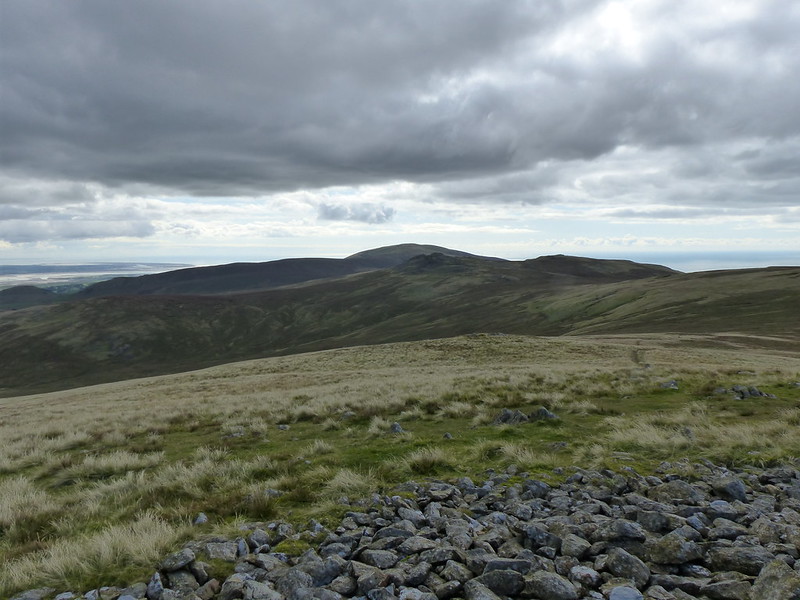 On Whitfell you are a bit further away from the hills of Wasdale and Eskdale, but if anything, I thought this enhanced the view. I took several panoramas during the course of the day. Sadly, none of them were very successful, but I’ve included this one, if for no other reason than to remind myself of the great sweep of hills from Whin Rigg in the west round to Caw at the southern extreme of the Coniston Fells.

Despite the forecast hill-fog, the higher fells were often clear… 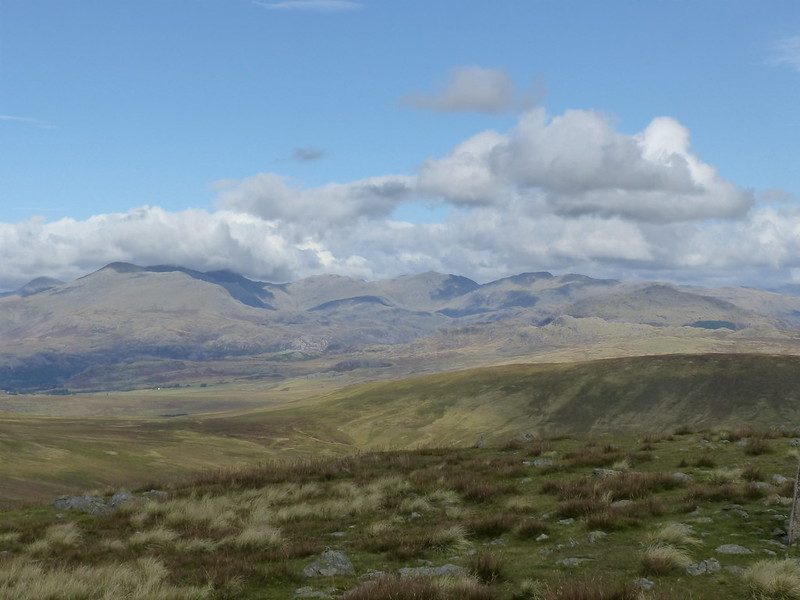 I’d flirted with the idea of descending from here, via Biggert to Hole House, then climbing The Pike and Hesk Fell on my way back to Devoke Water. This now seemed overly ambitious, and Hesk Fell looked every inch the tedious lump which Wainwright bemoans. So I wandered back to Woodend Height, skirting the other summits on my way.

Dropping off Woodend Height toward Rowantree How, I found another comfortable, sheltered seat and settled down for another brew. 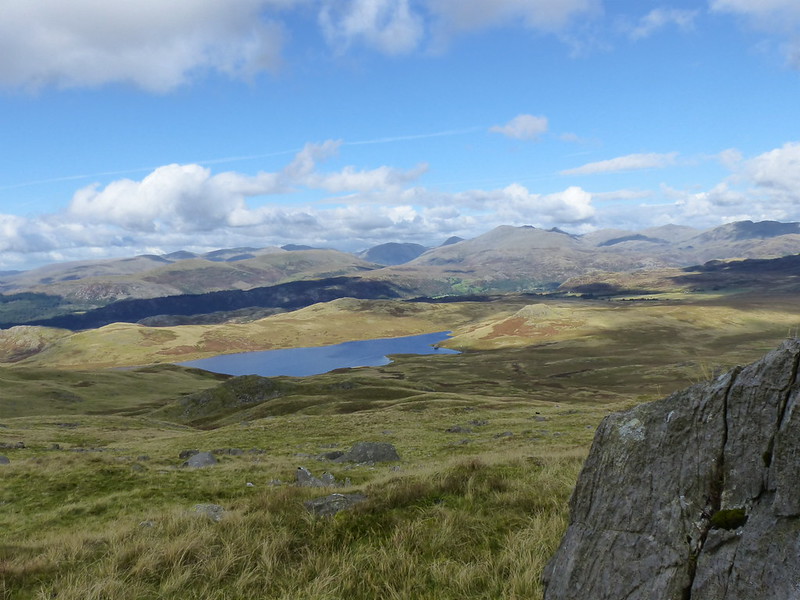 The view from my final brew stop. 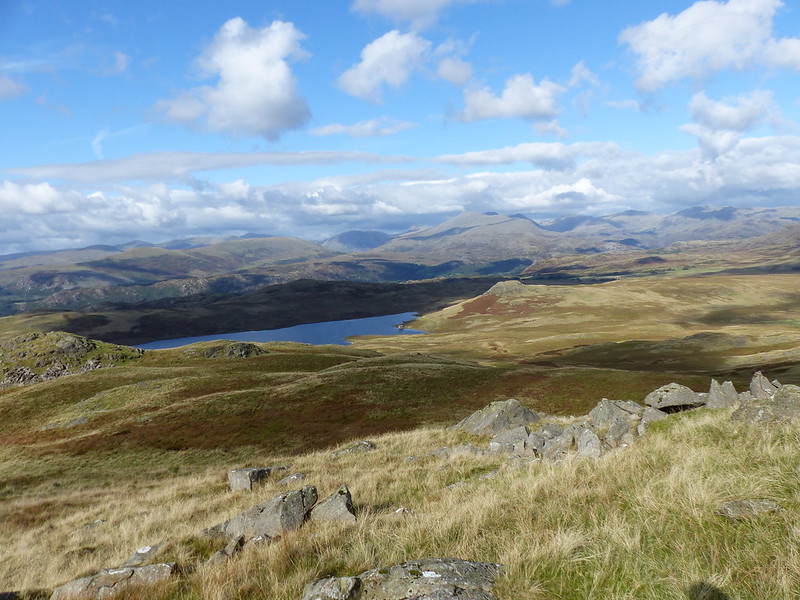 The same view from a little lower down: the rocky knoll on the left is Rowantree How. Note Seat How to the right of Devoke Water. 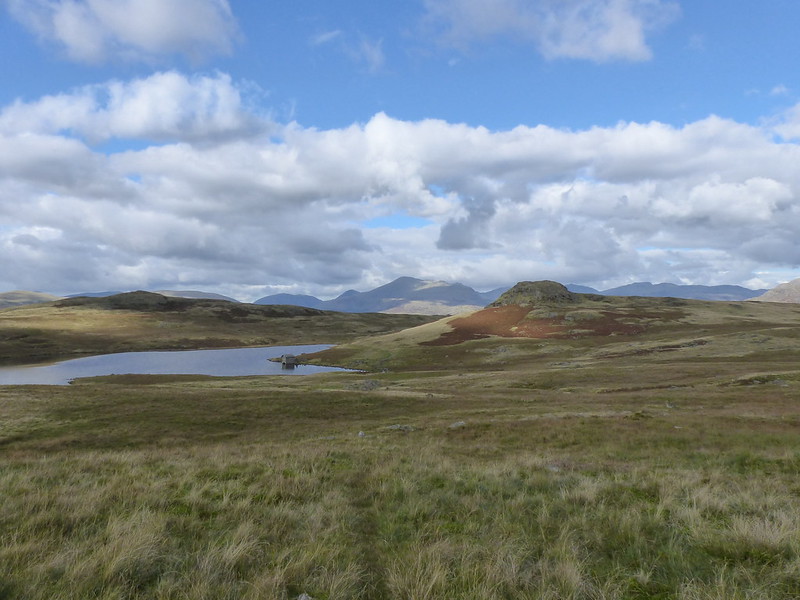 Devoke Water and Seat How. 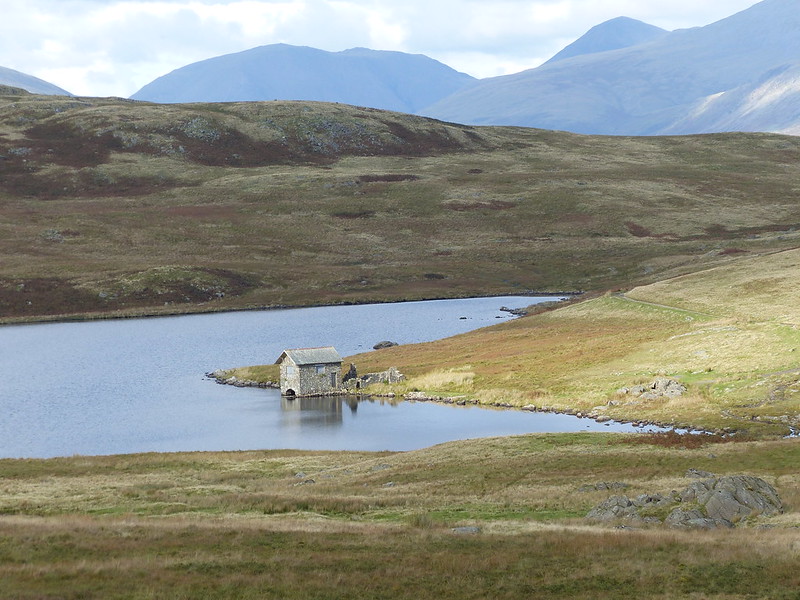 Seat How is another modest little top, but it is gratifyingly craggy, giving a satisfying scrambling finish to the round 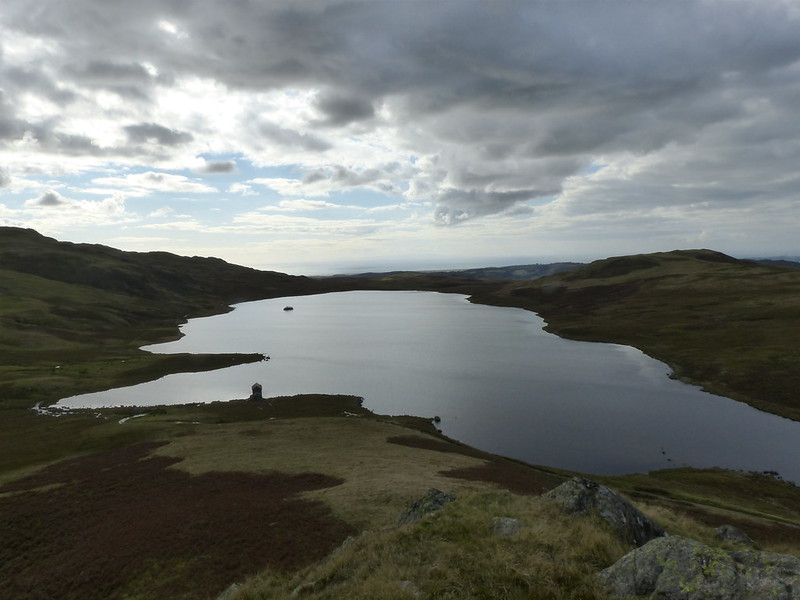 Devoke Water from Seat How. 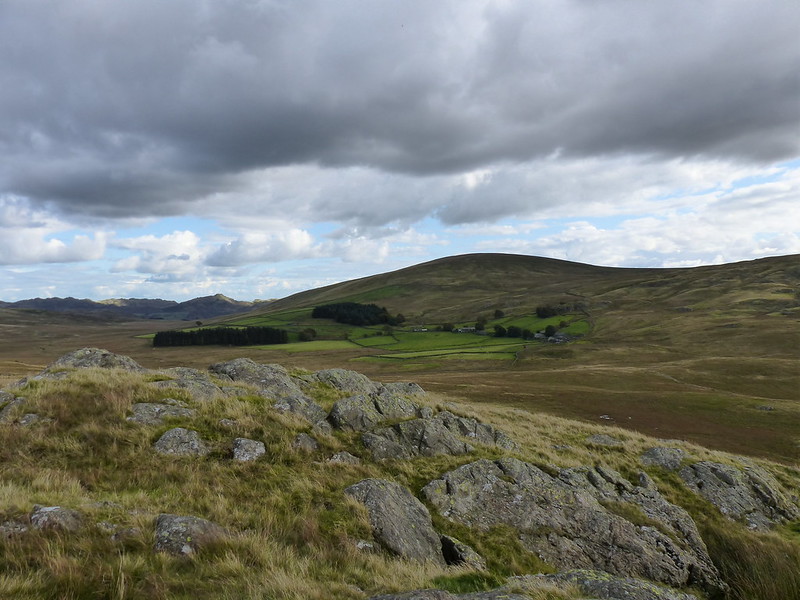 The pastures around Woodend, Hesk Fell behind. 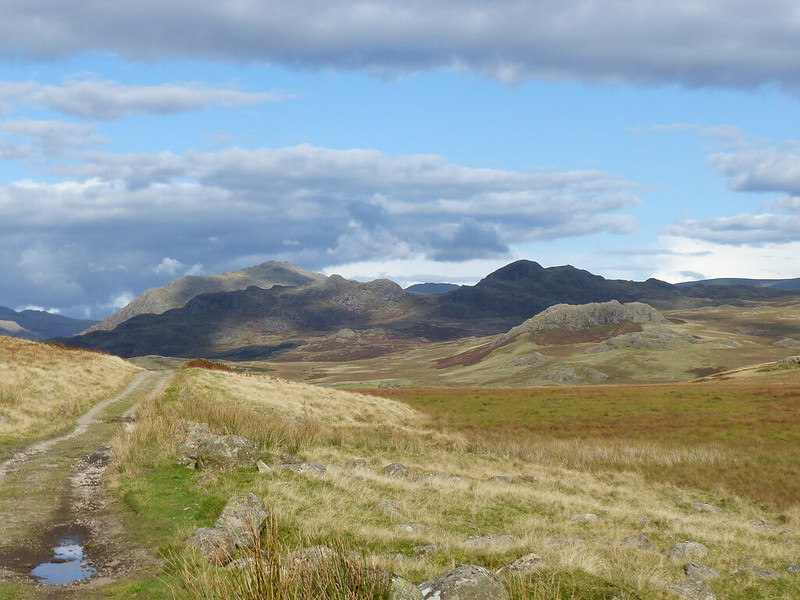 I’ve often pontificated about the elements which come together to provide a good day on the hoof; I shan’t start again here, except to say that a really good walk might not just leave you wanting to come back and do it again someday, but may also fill your head with ideas for other walks you’d like to do soon. That was certainly the case with this one: not only did I find myself wanting to return to reascend many of the familiar hills I could see around me, but I also now plan to head round to the west coast to grab The Knott, and to explore the dunes at Drigg; I need to bag Buckbarrow, and The Pike, and even Hesk Fell; I spent large parts of the day thinking about a Duddon watershed walk and also wondering how to continue a high level route which would begin with Black Combe and then head north over Whitfell and these Devoke Water tops. Speculating about these more fanciful routes was great fun….in fact: where are my maps? After Harter Fell, where next?