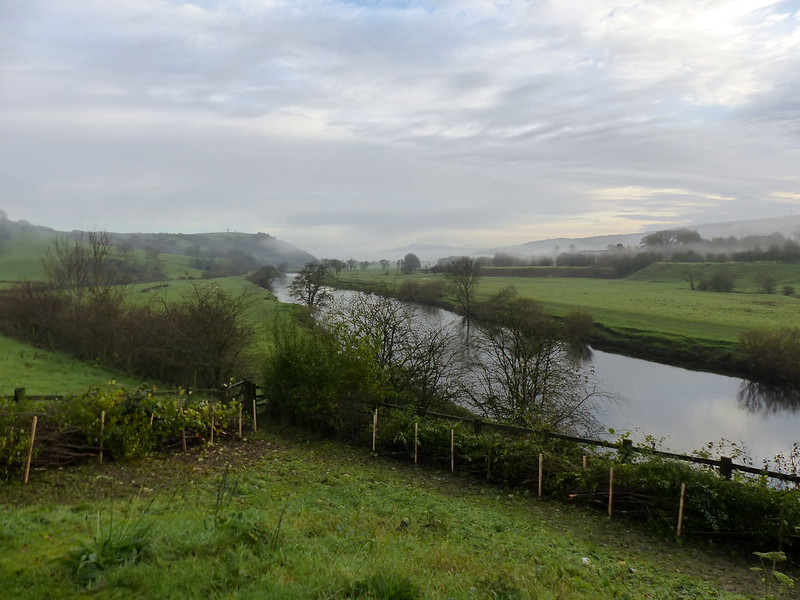 B was playing away for his school team in Liverpool, necessitating an early drop off in Lancaster and a lunch time pick-up. I decided to use the time between the two for a little wander along the Lune. The car park at Crook of Lune is pay and display these days, but only a pound for the whole day. Signs at the car park warned me that the path along the north bank of the river was closed due to a landslip, but, being pig-headed, I decided to head that way anyway, to take a look-see. The forecast promised fair weather, but I set-off with atmospheric, early-morning mist. The fields along the Lune here were very soggy, as if the river might recently have been above its banks. 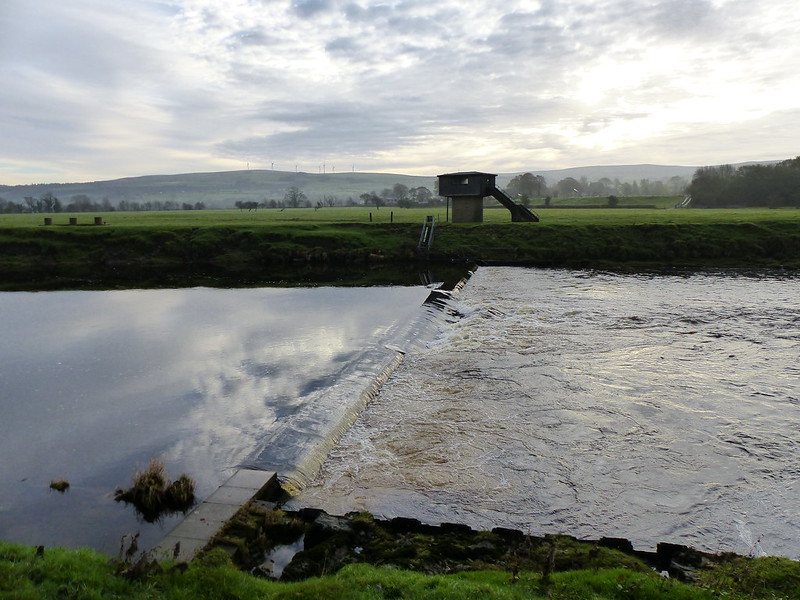 What could be the purpose of this building on the far bank? Surely, the weir doesn’t need to be watched? 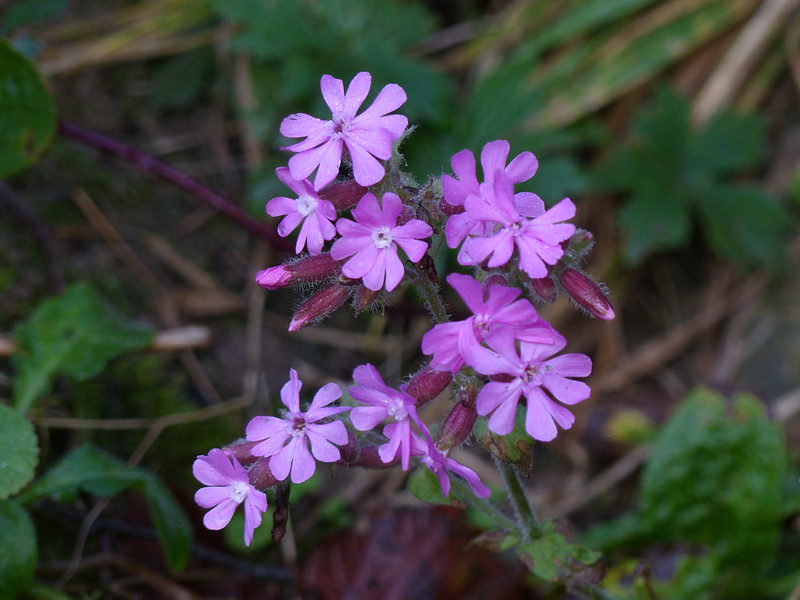 I was surprised to find Campion flowering on Armistice Day. 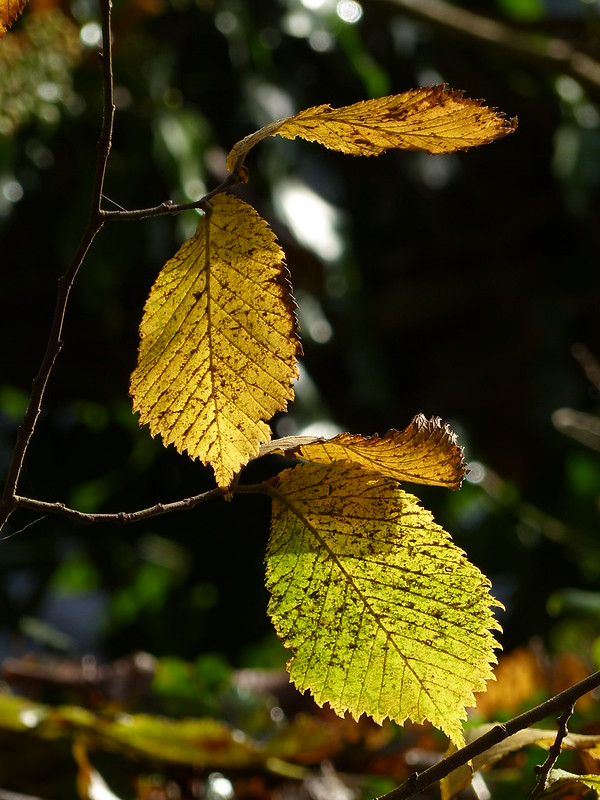 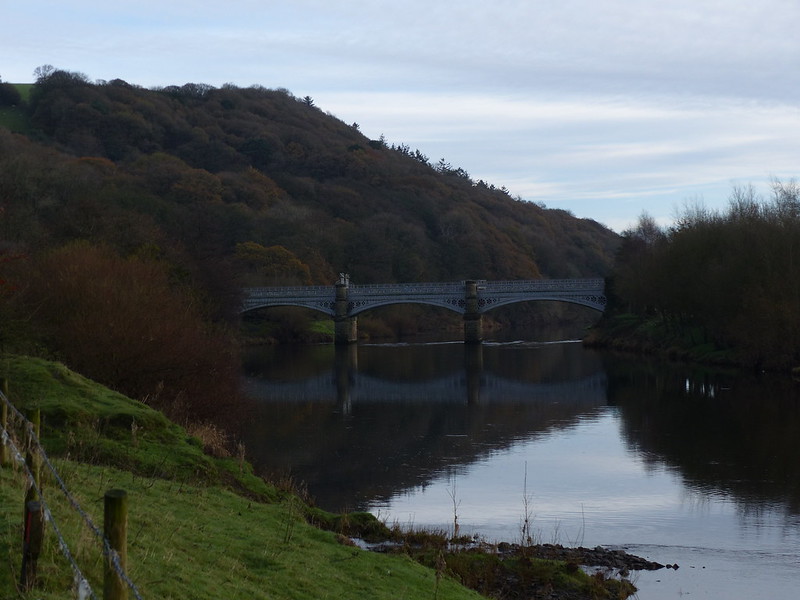 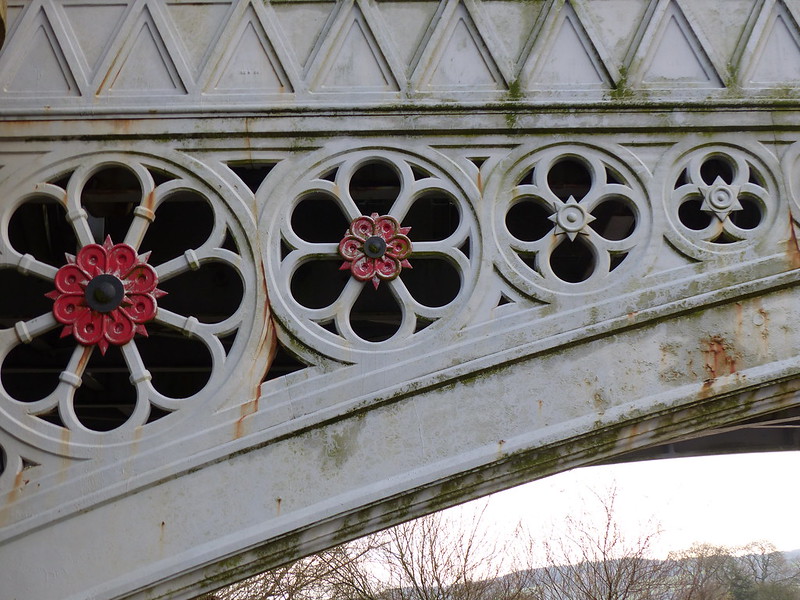 Just beyond the bridge, the path enters Aughton Woods. 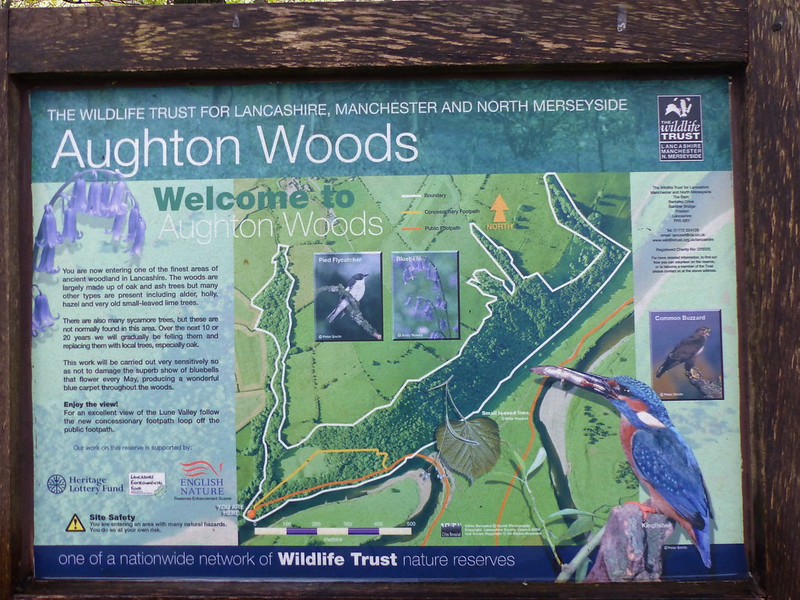 I took the higher, permission path hoping it might perhaps take me around the damaged section of path by the river.

It didn’t, but it did take me to this view point in Lawson’s Meadow… 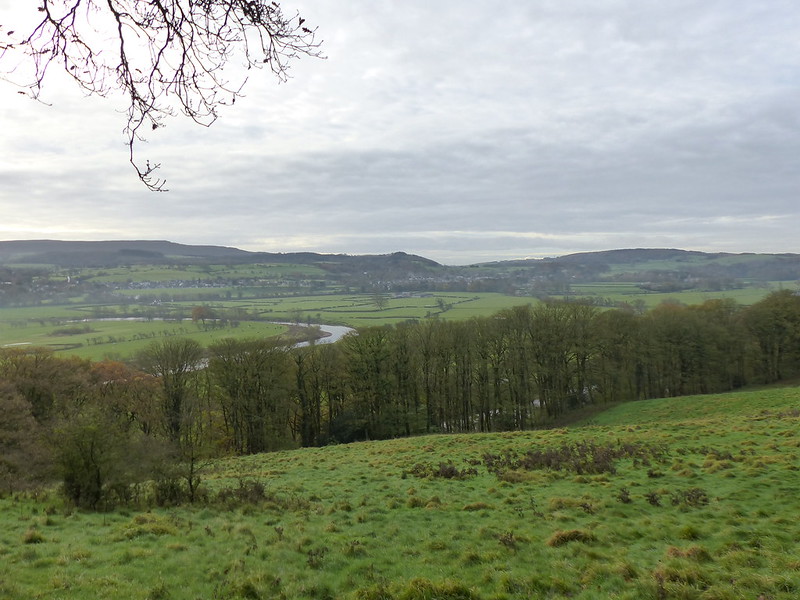 This would be an easy spot to get to after work. I can see myself returning as soon as the evenings are light enough.

The path down from there proved to be treacherous. Wet leaves, tree roots and the kind of muddy surface which slips, taking you with it. I fell over a couple of times, the second landing, unfortunately, very heavily on my camera. The fact that the camera doesn’t seem to be damaged is testament to the Camera Care Systems bag which I scrounged off my Dad. My back seems to have recovered too, although it was a bit sore at the time.

The landslip proved to be substantial. Several large trees had come down and it didn’t look at all easy to get around the various blockages. It’s a while now since this happened and hopefully there are plans to restore the right-of-way.

Although it’s not shown on the OS map, I now knew that I could cross Waterworks Bridge, so turned back through the woods along the lower path. 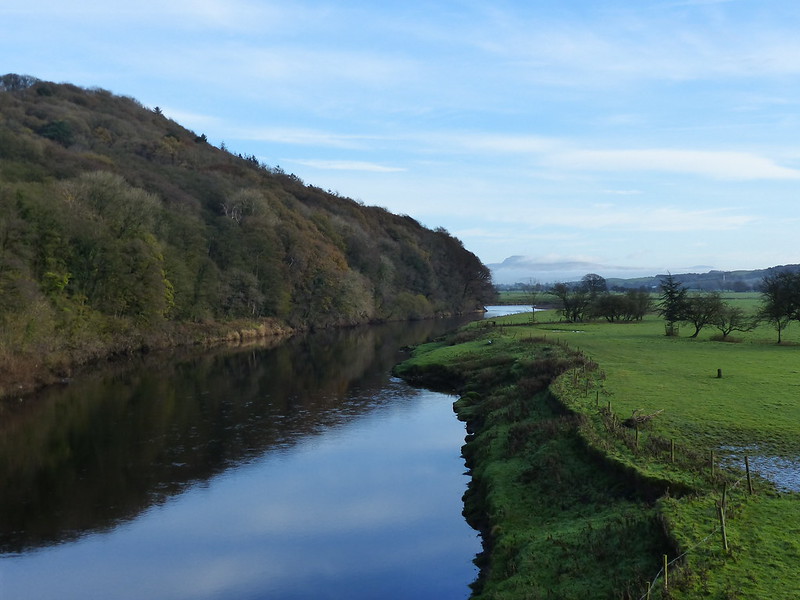 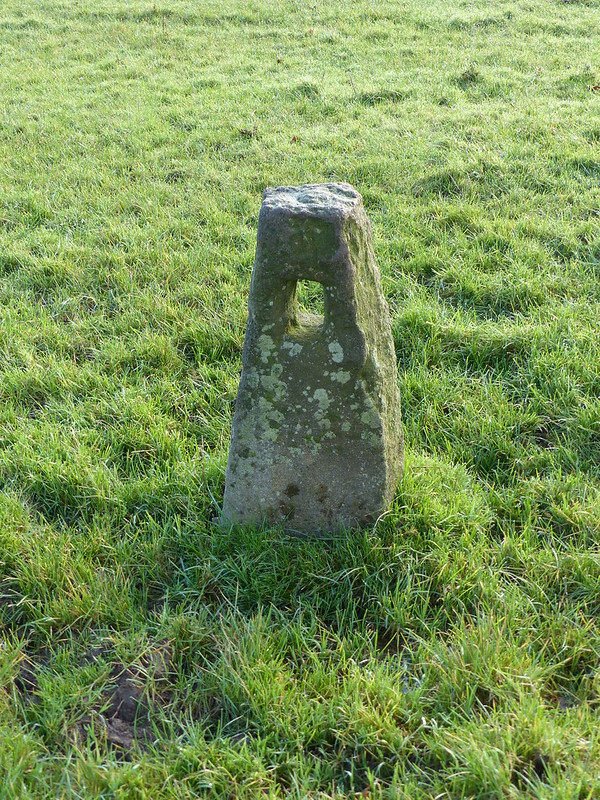 Anybody know the purpose of this? There were a couple of them, set well back from the river bank. You can see one, in fact, in the photo above of Ingleborough. 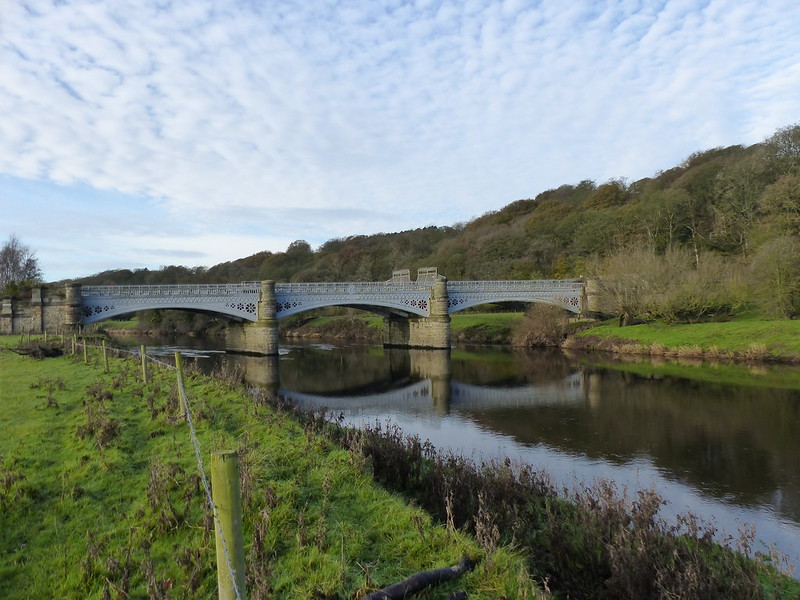 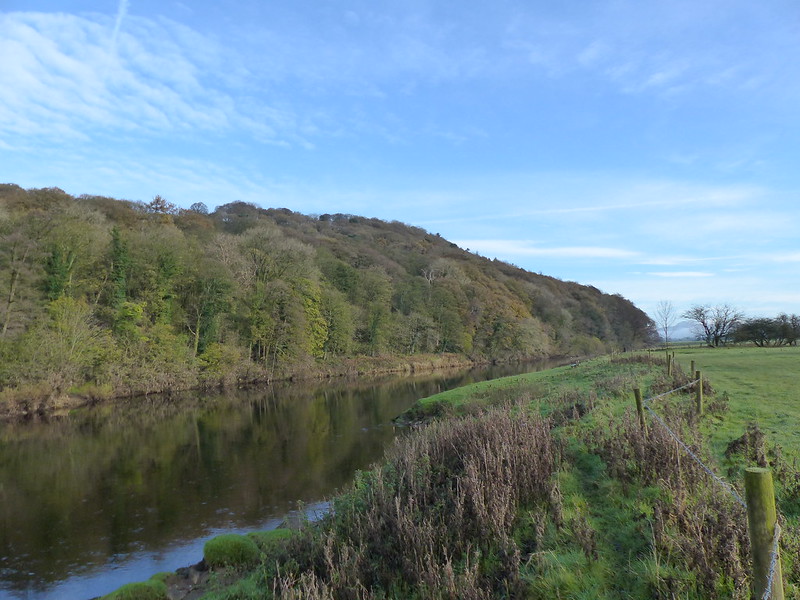 Aughton Woods and the Lune again.

Whilst I was in the woods, the cloud had substantially cleared and the sun was shining. The river turns through a huge loop here, doubling back toward Caton. It was really enjoyable to walk: the sun was shining, there were Cormorants and Goosanders in the river and Ingleborough looked fantastic… 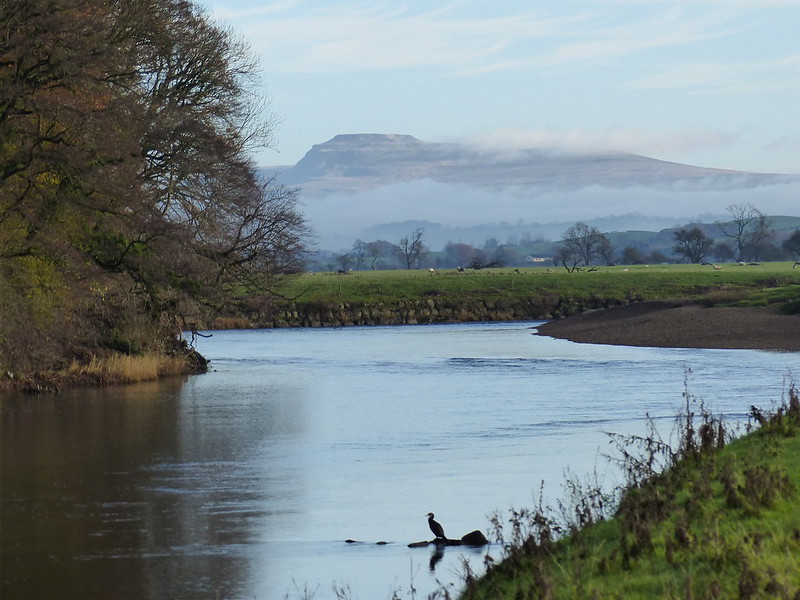 I took far too many photos of Aughton Woods, the river and the mountain which dominates the valley. 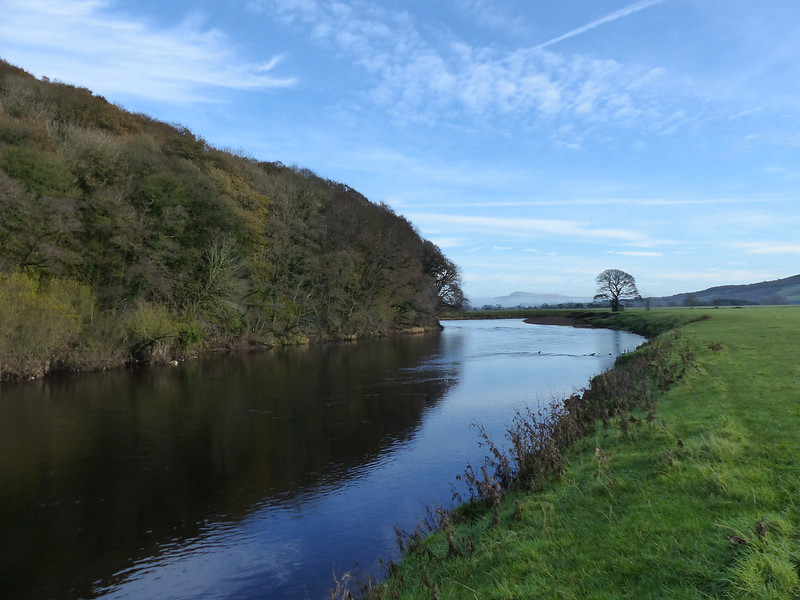 I liked this tree and the small hut beneath it too. 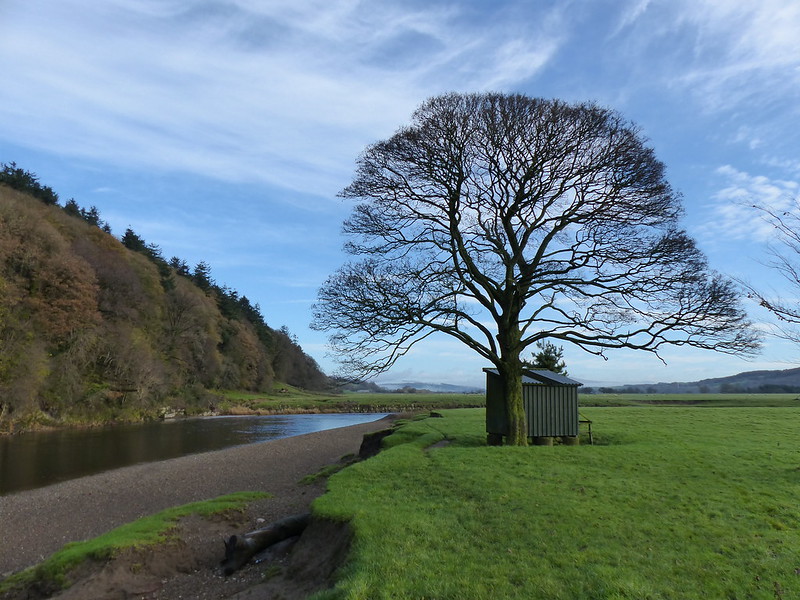 It wasn’t the only one of its type I saw that day. There’s something by the door for holding…I’m not sure what? 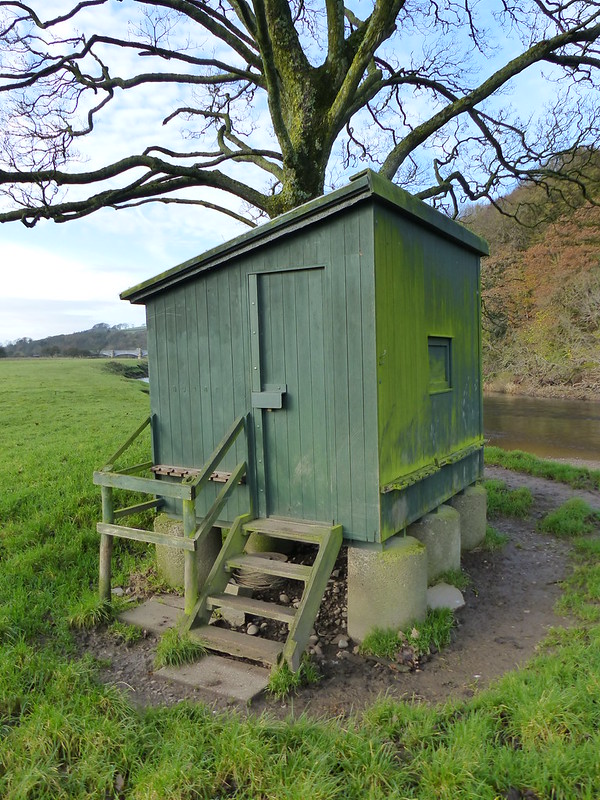 Could be for fishermen? Or wildfowlers? 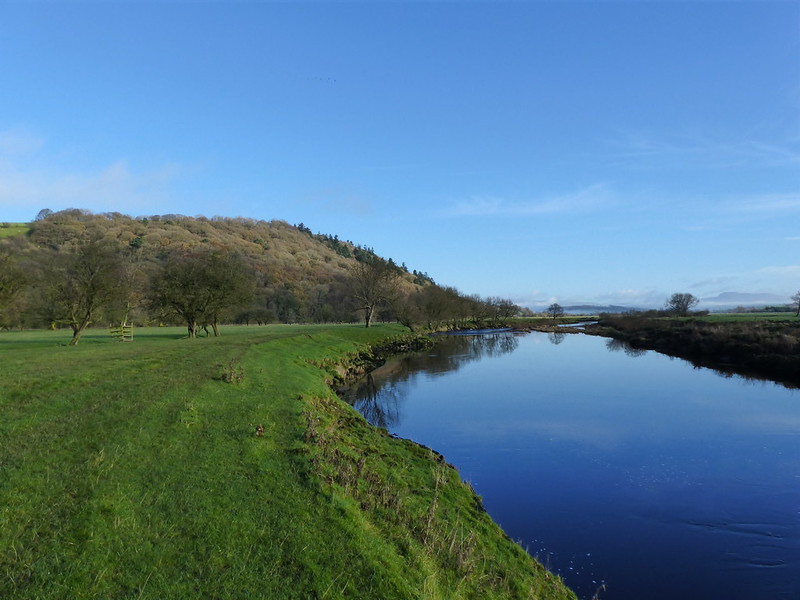 Eventually, I left the riverbank near Caton and headed back towards Crook O’Lune on the former railway line which is now a footpath and cycleway.

It’s not as nice walking as the riverside path, but, ironically, much busier.

Again, I was surprised by what seemed like unseasonal wildlife, this time a Blue Tit feeding a late brood in a pathside nesting box… 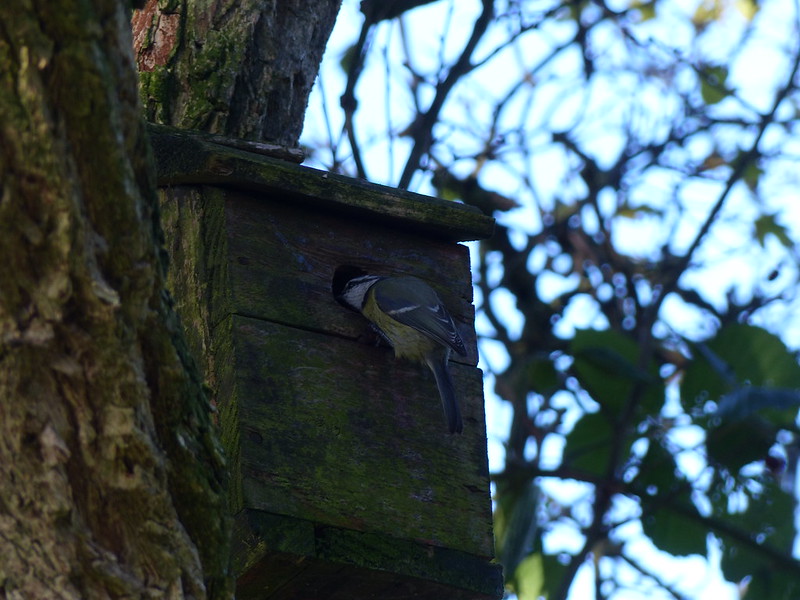 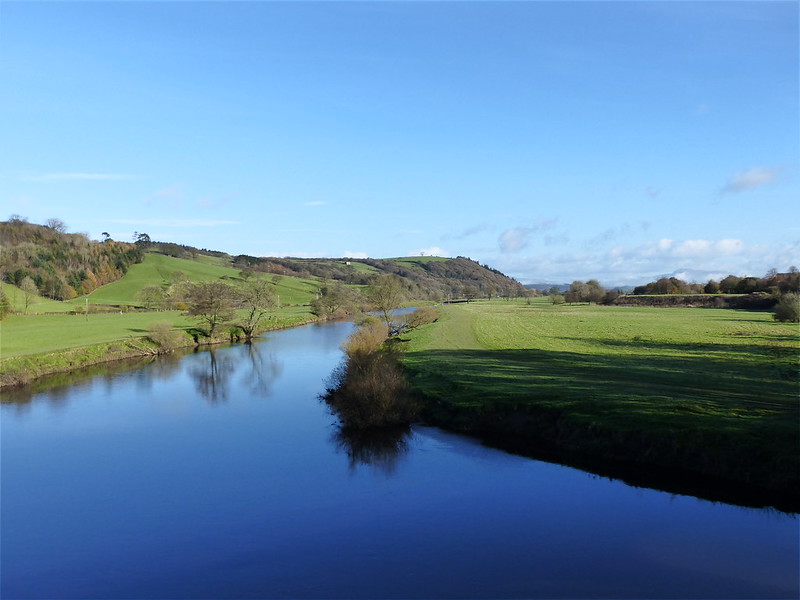 The Lune from Crook O’Lune. Quite different from the first photo!

I still had some time in hand, so went seeking out Gray’s Seat, a viewpoint popularised by the poet Thomas Gray in the eighteenth century. 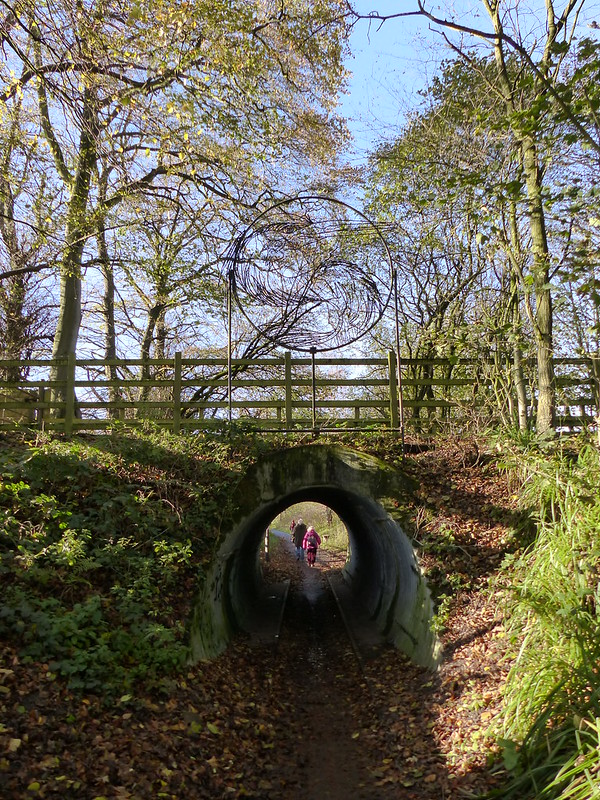 Art on the old railway. 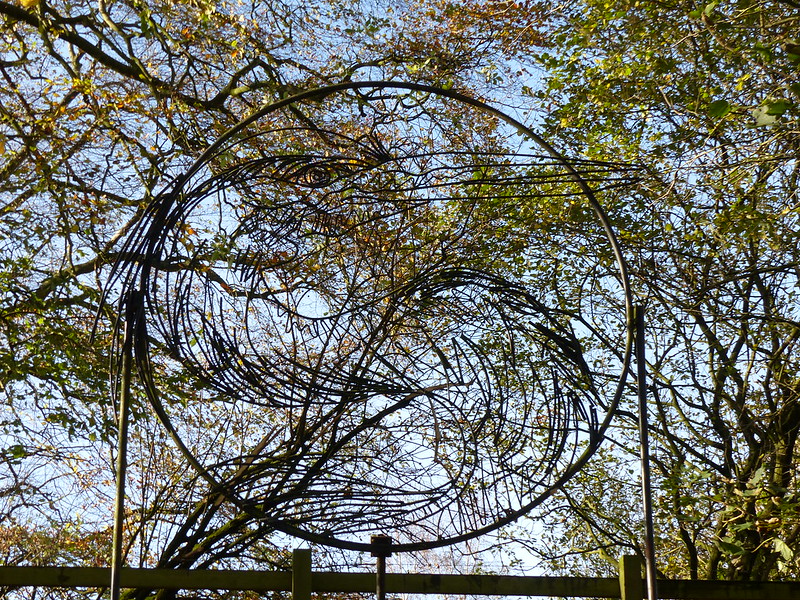 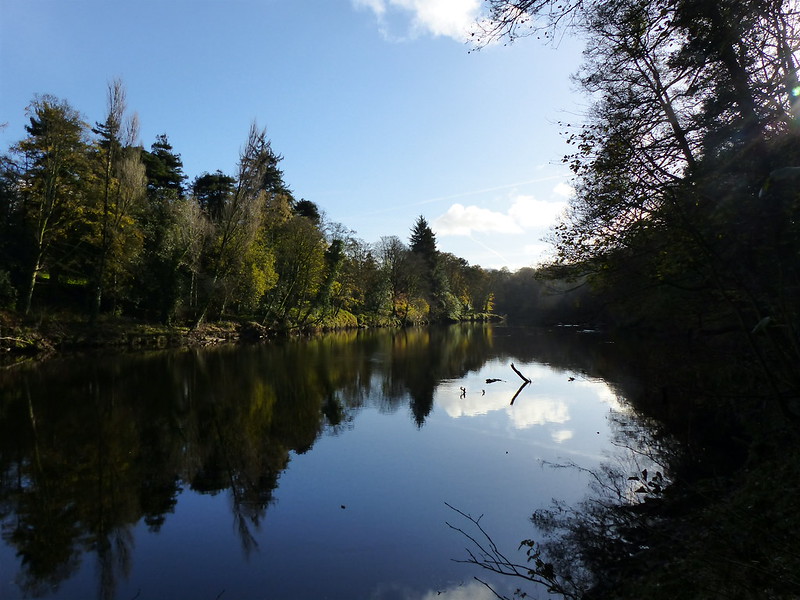 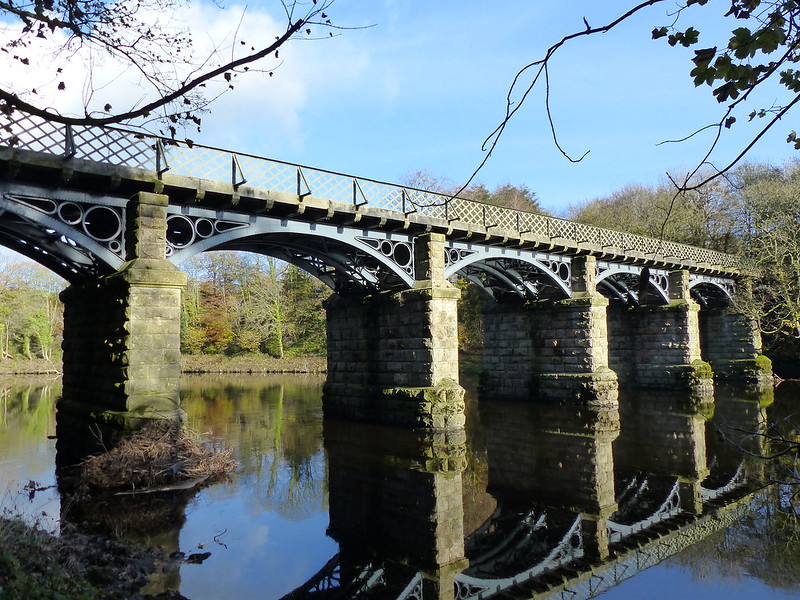 One of the bridges at Crook O’Lune. Last time we were here, in the summer, the boys swam in the river, to get clean…. 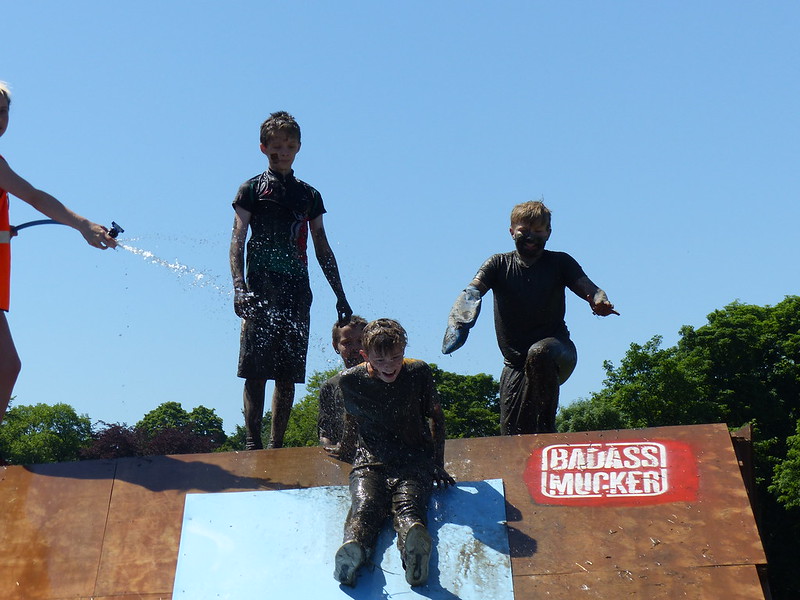 …after taking part, with some friends, in the Badass Mucker challenge, an assault course. Not everyone got quite so filthy. Our boys sought out the muddiest sections and then swam in them. Again. B’s right arm is in a waterproof plastic cover because his arm was still in a pot at the time, after he broke it 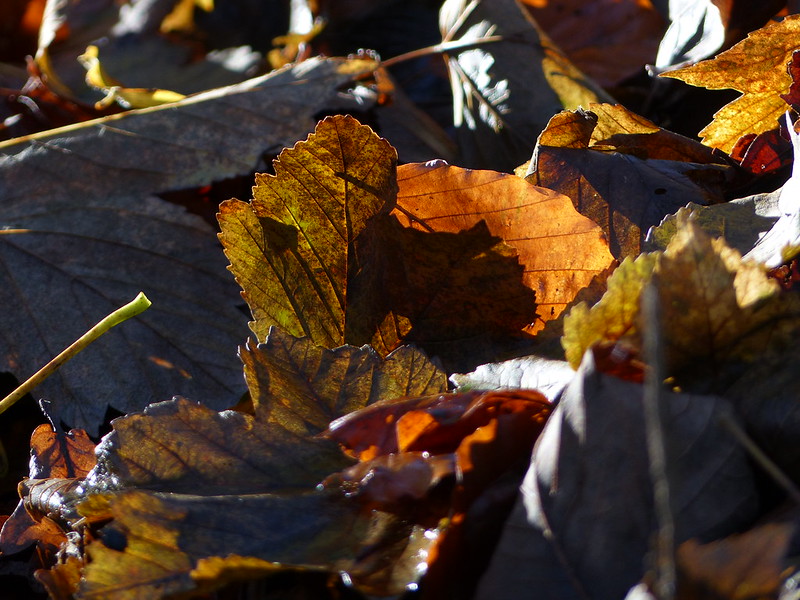 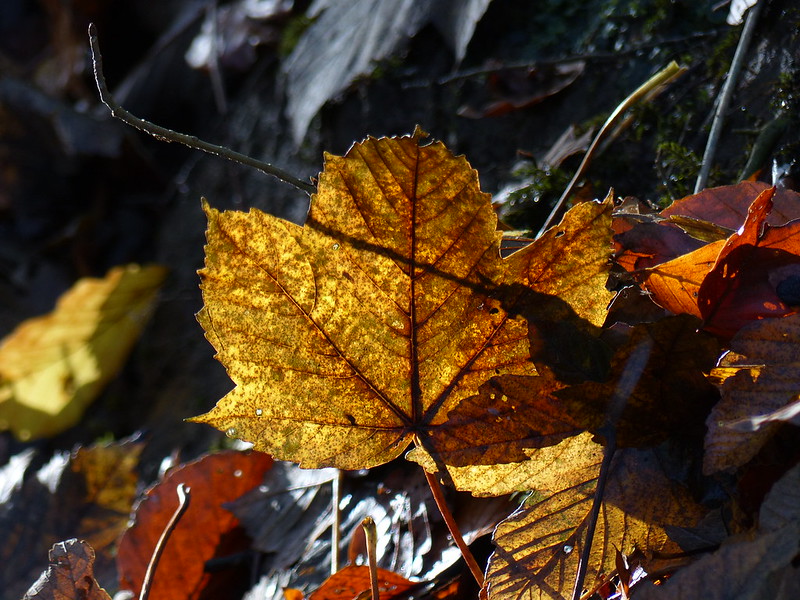 Gray’s Seat was originally by the road. Artists visited and painted the famous view, including Turner. Then the road was moved and Gray’s Seat became a woodland.

This is Turner’s version of the view…

…which I think is now in the Tate. I think it’s fair to say that he has taken considerable liberties with the landscape. It’s hard to make a comparison however, since this… 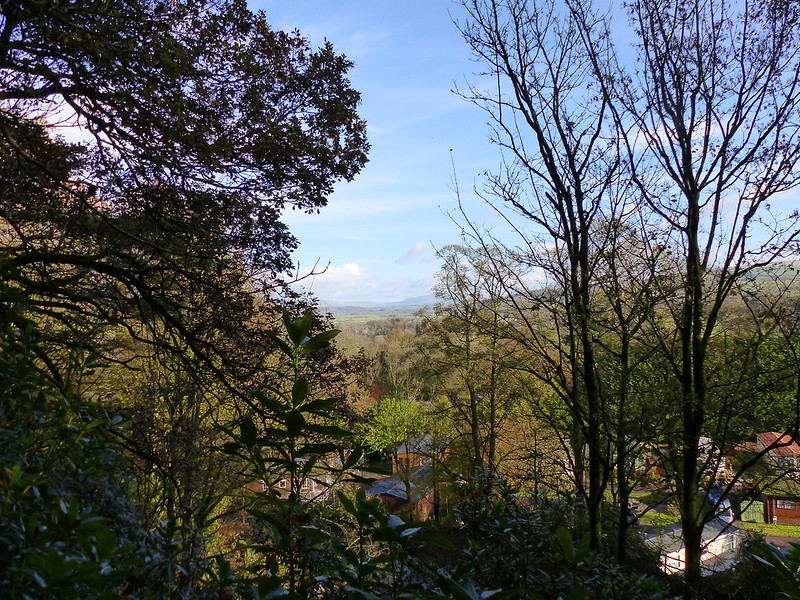 Shortly after I arrived at my scheduled rendezvous with B, he texted to say he would be back just after two o’clock, more than an hour later than I expected. I walked into town looking for a cup of tea, whereupon he texted me again to say that he was sorry, but he had meant just after one. I think I’d had a better morning than he had: he’d had a taste of some of the dark arts of the front row and I think his neck was worse than my back. I shan’t repeat the uncharitable things he had to say about his opponents, or Mr Magoo their teacher, who refereed.