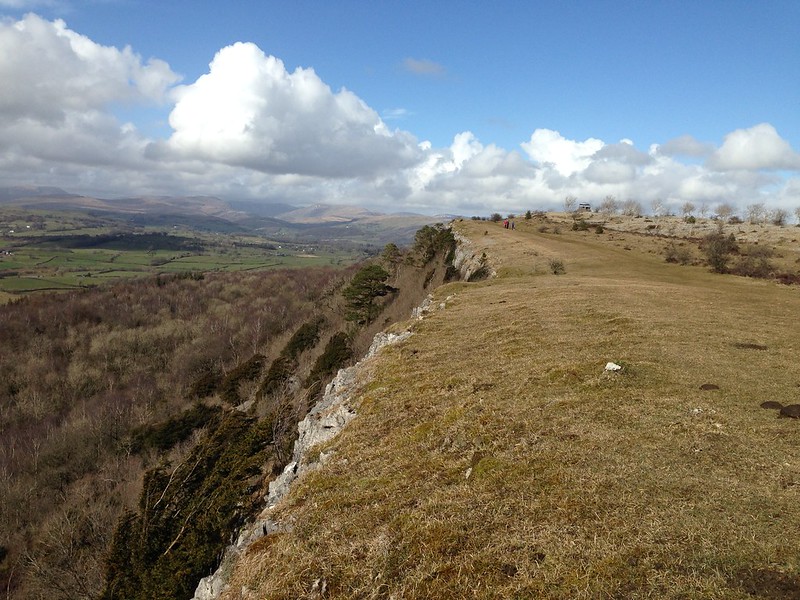 Easter Monday was a bit of a wash out. We stayed in and played more games and chilled. Eventually, when the rain paused briefly, Andy and I set out on a wander around Eaves Wood. Of course, the weather had just been lulling us into a false sense of security and it was soon drizzling, and then chucking it down again. Everywhere was clarted up with mud again and, almost inevitably, one of my slips led to a proper both-feet-in-the-air-arse-in-the-mud pratfall. By that time I think we were both already considering giving up and heading home, but that banished any doubts and we made a beeline for dry clothes and hot tea with me looking and feeling like Swamp Thing.

I didn’t take many photos. Just one in fact, of some puddles in our driveway… 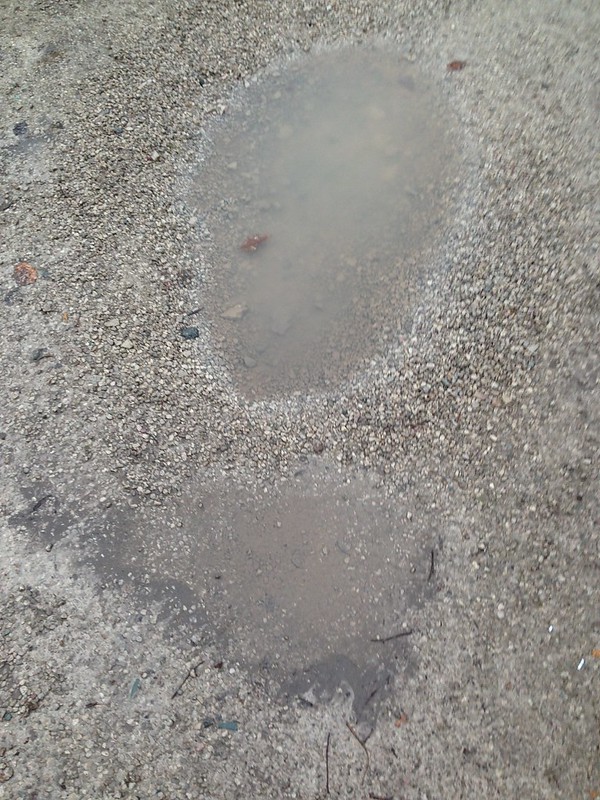 The Tuesday was forecast to start in much the same way, but then brighten up. We’d already arranged to meet The Tower Captain and his daughter S for a walk; the Surfnslide crew decided that they would stay another day to squeeze in one more walk and catch up with TTC. I didn’t fancy another walk in the rain (I’m not sure anyone else was all that keen either) so we elected to wait for the weather to improve before we set off. We were just finishing our lunchtime soup, watching it still rain through the kitchen windows, and cursing the forecasters, when the rain finally stopped, right on queue. We left a car at the southern end of Brigsteer Woods, piled into the other two cars and parked those in the smaller of the two car parks on the Underbarrow – Kendal road. That car park is in a small, old quarry. Almost inevitably, the DBs saw this as a brilliant opportunity to do some climbing and scare the wits out of the rest of us. 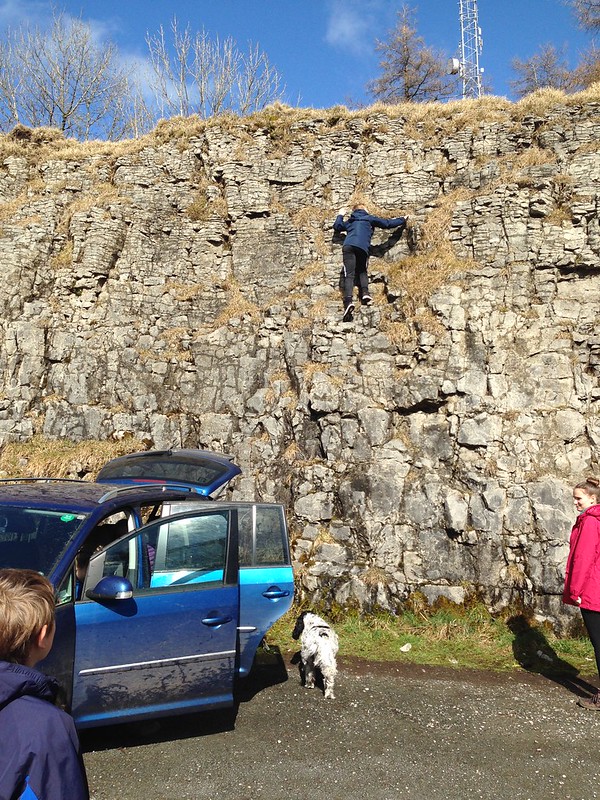 A very small climb soon brings you out on the highest part of Scout Scar, which has marvellous views of the higher hills of the lake District. 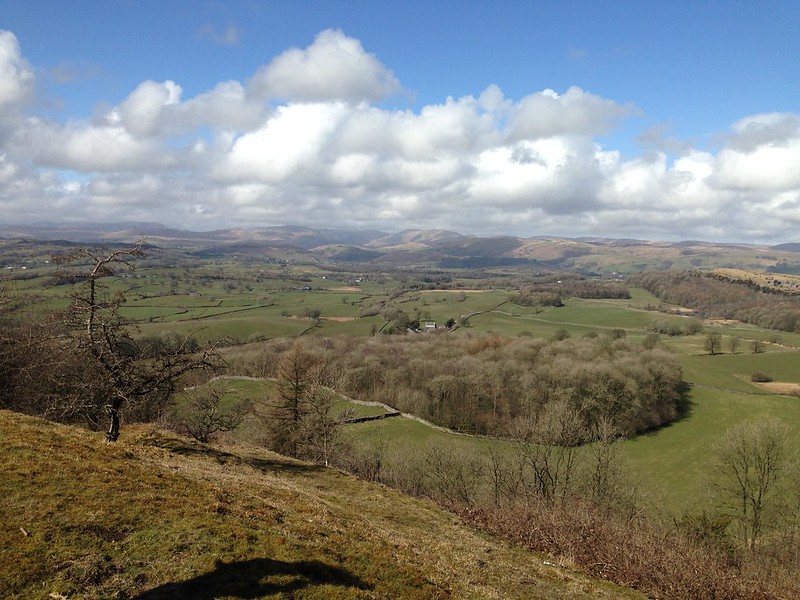 We were a sociable group of ten, or twelve if you count TTC’s two dogs. 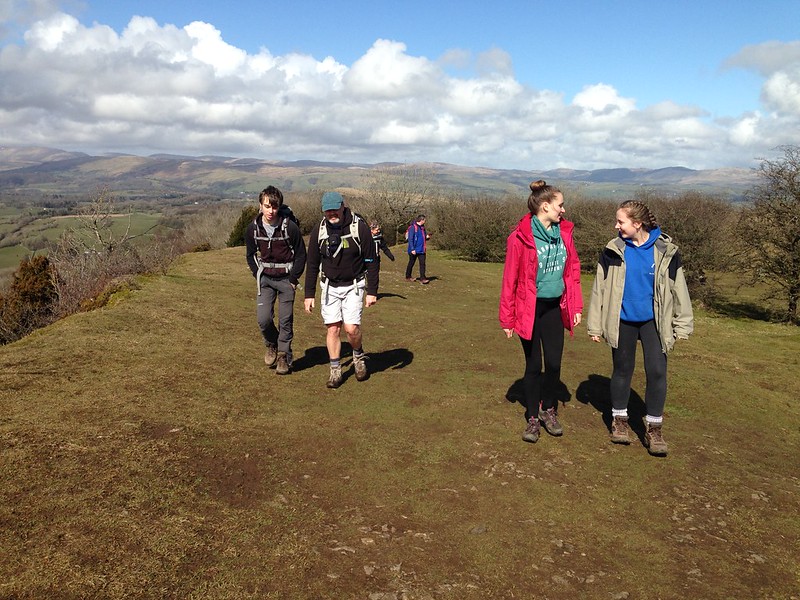 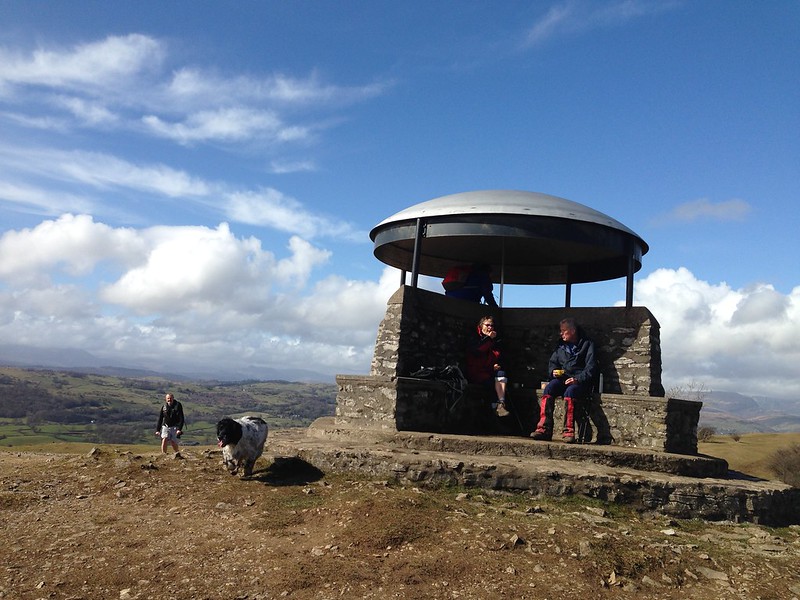 …is The Mushroom, a shelter built in 1912 to commemorate the Coronation of King George V. The inside of the rim of the roof has a pictorial topograph which picks out the many hills and places which can be seen from this relatively modest top. 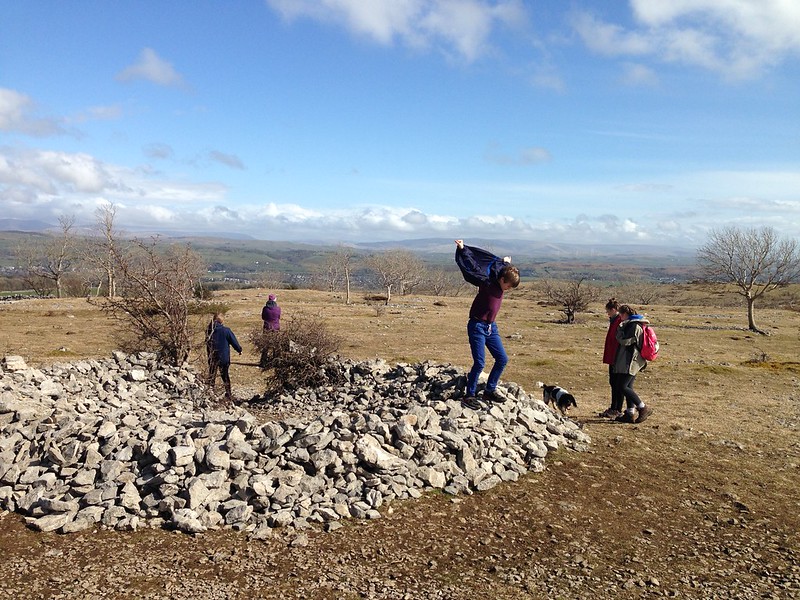 Almost inevitably (there’s a theme emerging here surely?), despite the sunshine, there was a cold wind blowing. Little S thought maybe he could use his coat to glide on it.

Unlike Whitbarrow, on Scout Scar there’s a path right along the edge. We were walking south, away from the Lakeland fells, but the temptation was always there to turn back to admire the view along the edge back to those hills. 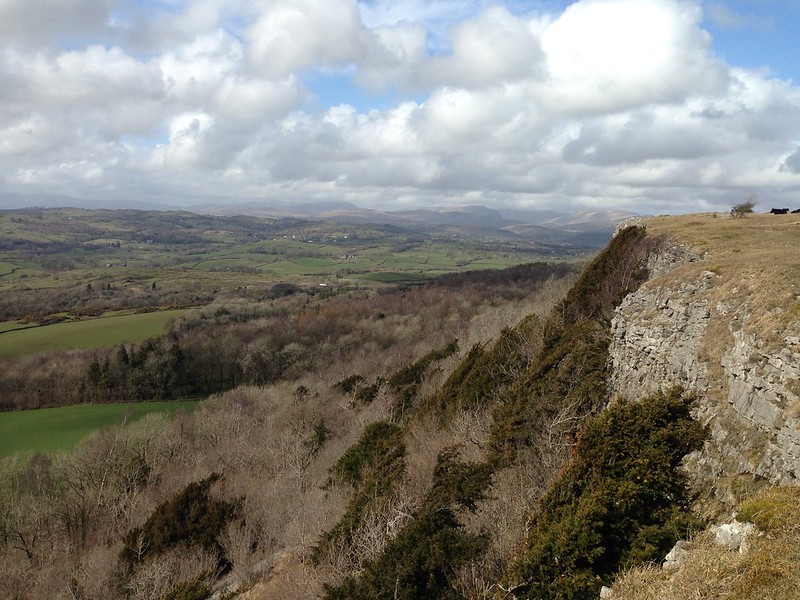 Not that the view the other away was at all shabby… 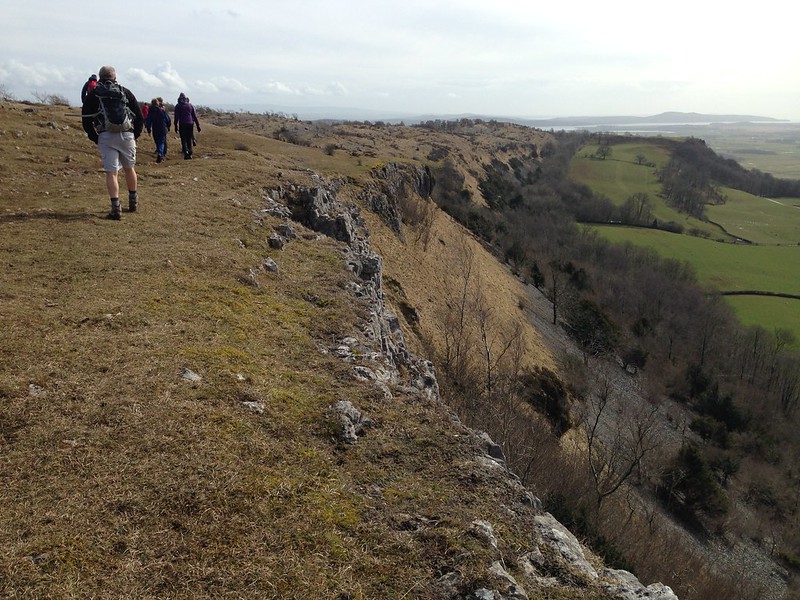 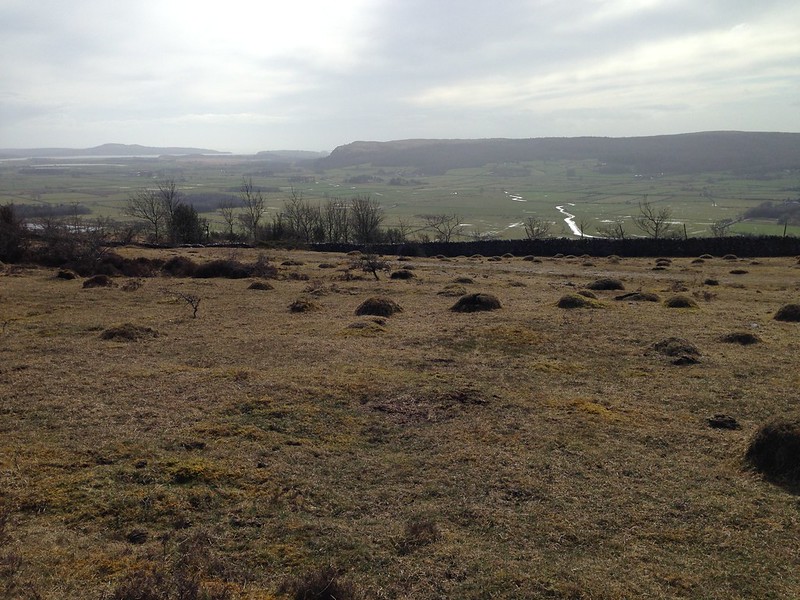 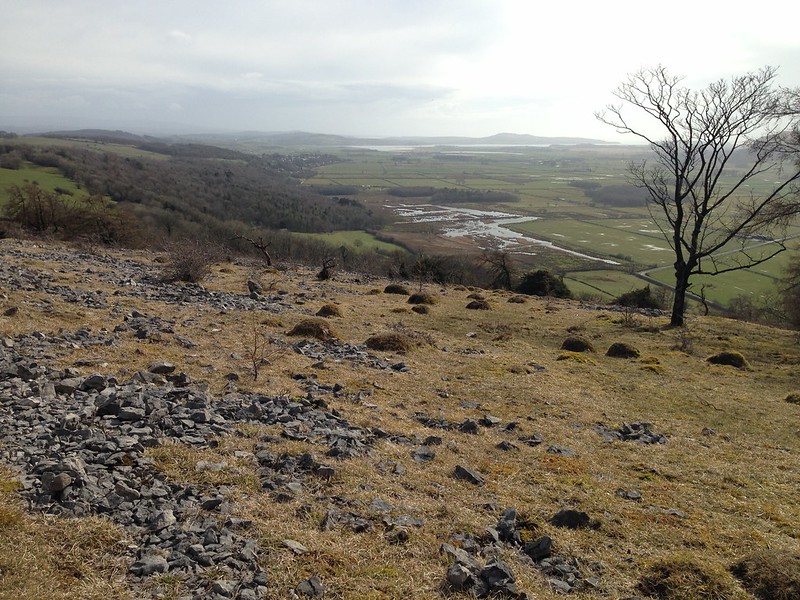 The ‘new’ wetland at Park Moss. 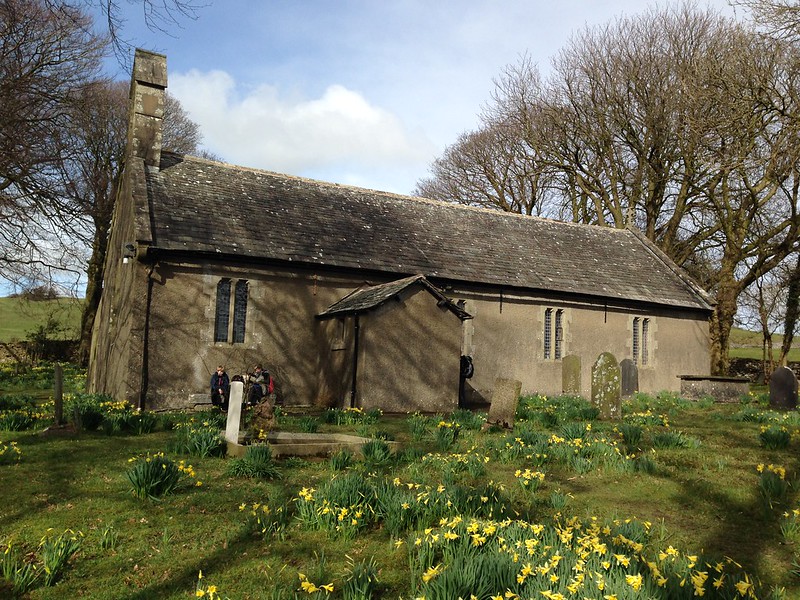 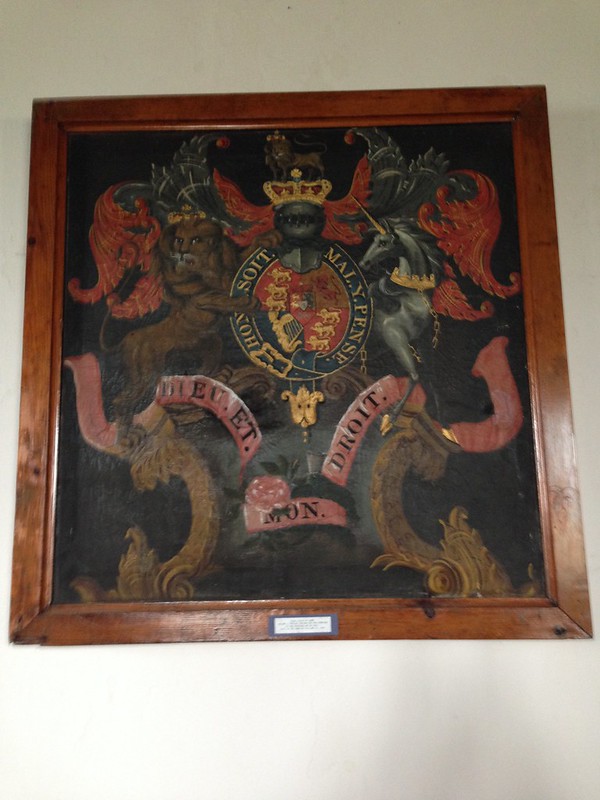 These painted Royal coats-of-arms are a feature of the small, rural churches in this area. Both Witherslack Church and St. Anthony’s on Cartmell Fell have them too. This one is the coat-of-arms of King William IV, crowned in 1830. 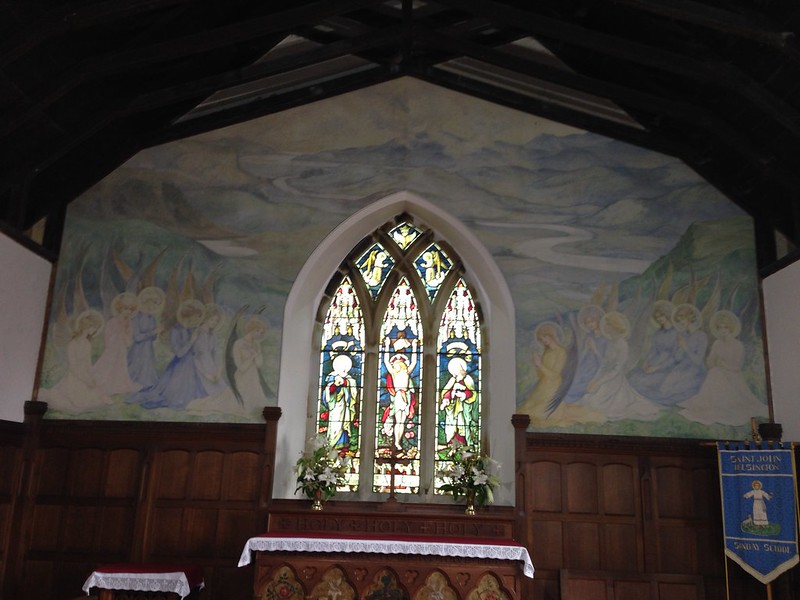 Mural, painted in 1919 by Miss Saumarez. 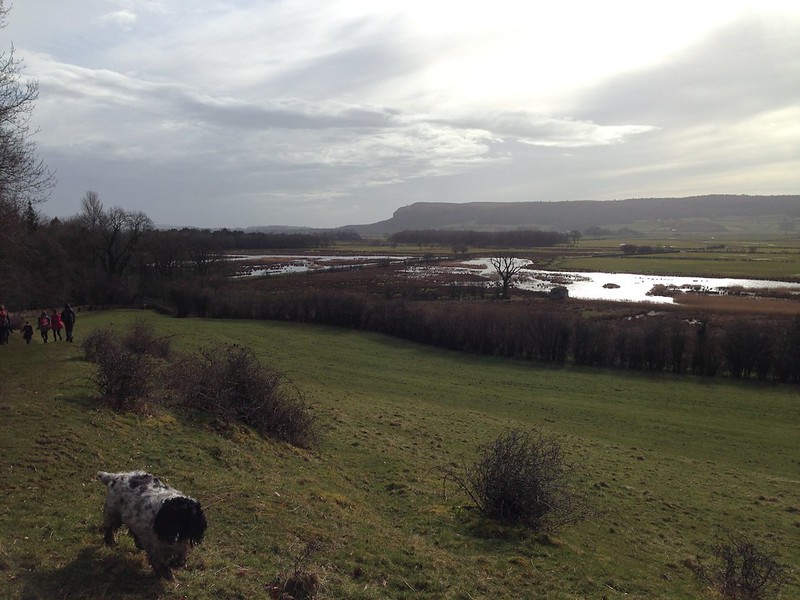 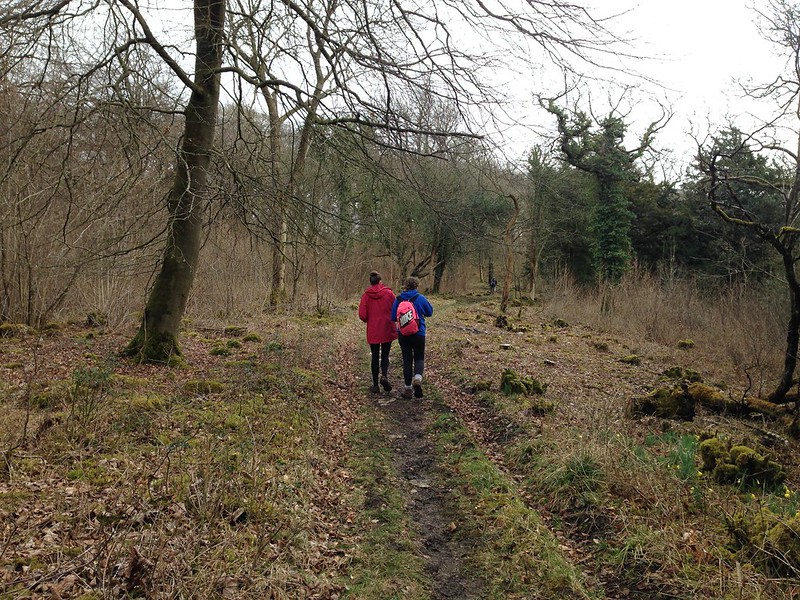 The paths through Brigsteer Woods were something of a quagmire, not surprisingly after a day and a half of rain. But there was some compensation in the form of the daffodils which fill some parts of these woods at this time of year. 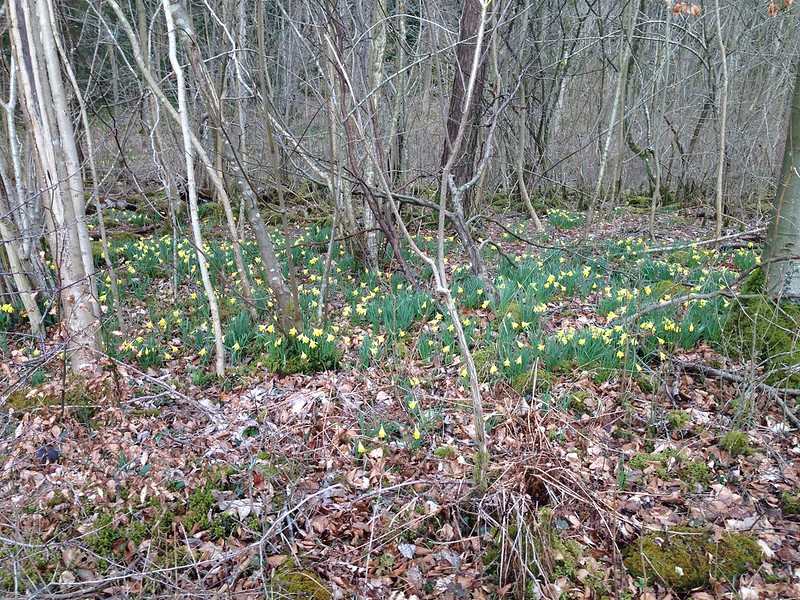 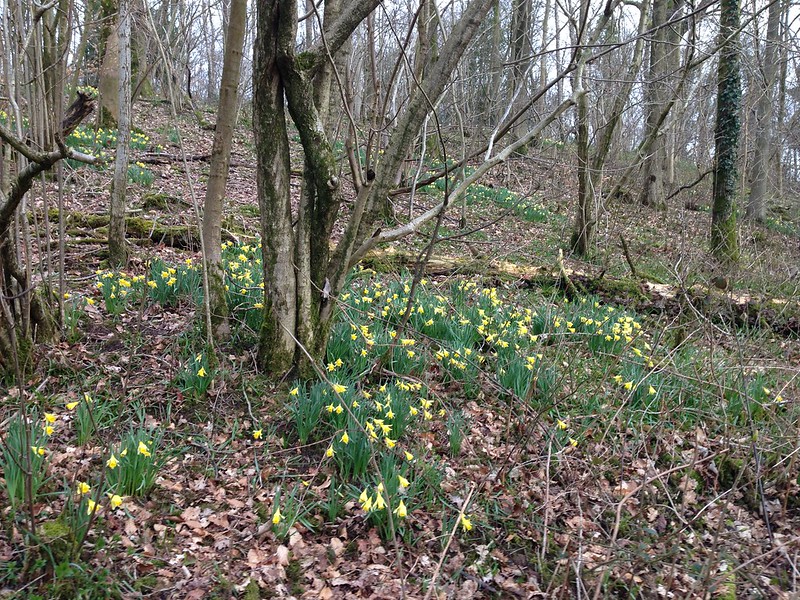 A short walk, but one packed with interest.

We had to rush back, not just because the Surfnslide party had a long homeward journey to undertake, but also because TTC had one final treat for our long-weekend planned, to wit a trip up the village church tower. I made it as far as the first floor… 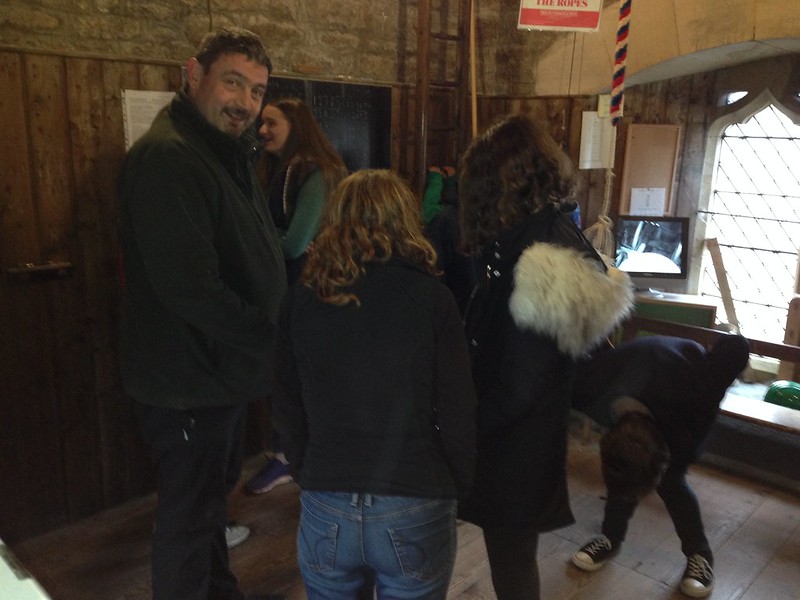 …but declined the rather spindly looking ladder and the balancing act around the bells above to get to the roof. The photos I took didn’t come out too well, but The Tower Captain really looks in his element here doesn’t he?