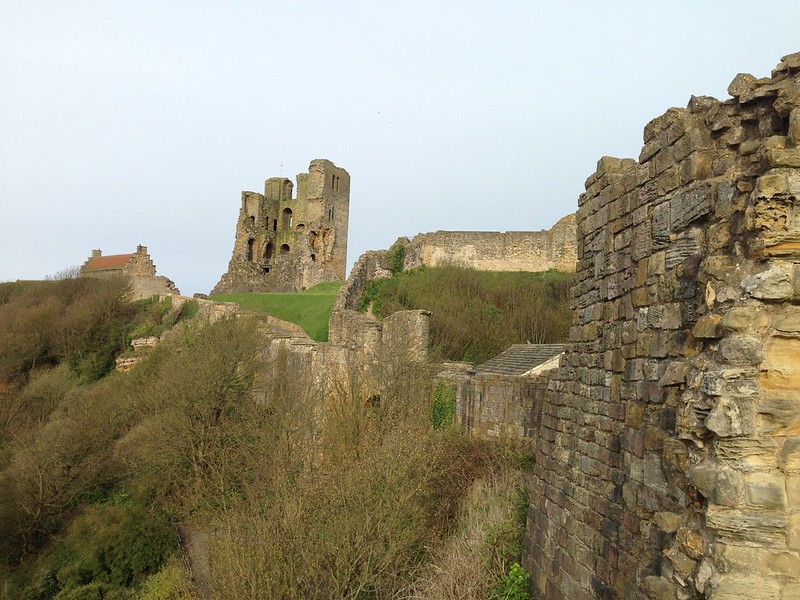 A fortnight ago now. B’s rugby team had a tour to Scarborough. 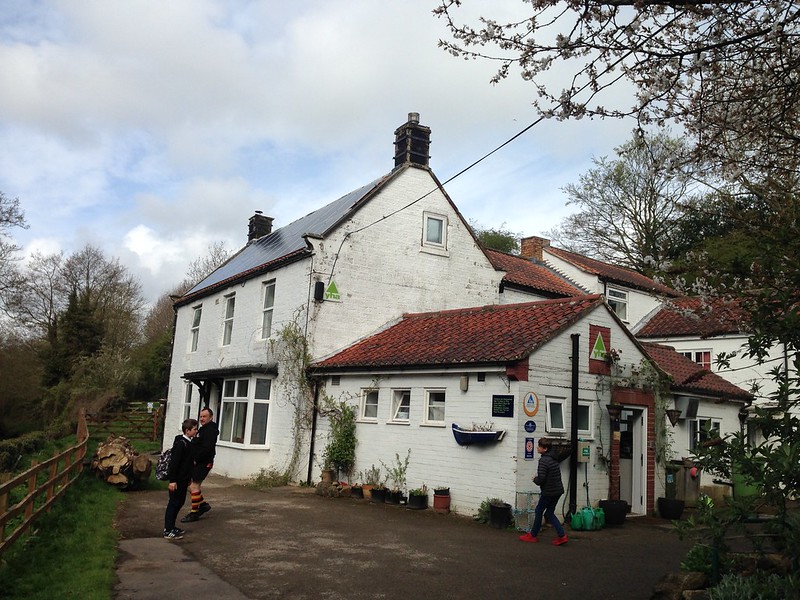 Before Saturday’s match we had an hour to spare, so took a short trip down to Scalby Mills. The hostel is tucked away on the banks of Scalby Beck and this is where the beck emerges into the sea. 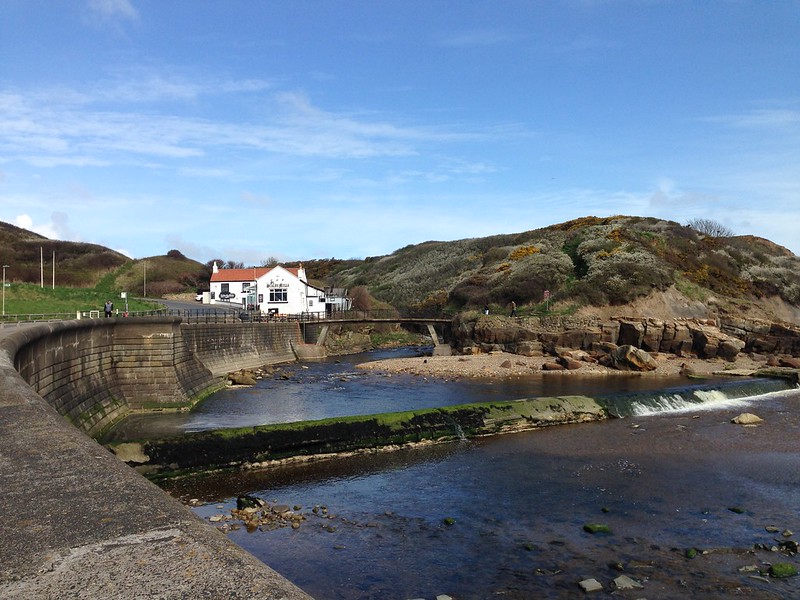 After some team photos the boys all darted off to charge around on the beach. B managed to fall over and get plastered in mud. Also, when we rinsed away the mud it was to reveal some nasty scratches on his shines from the rocks he’d fallen on.

There was some speculation amongst the adult members of the party about how far it would be to walk around to the Castle on the far side of the bay. Perhaps that set some cogs whirring in my head. 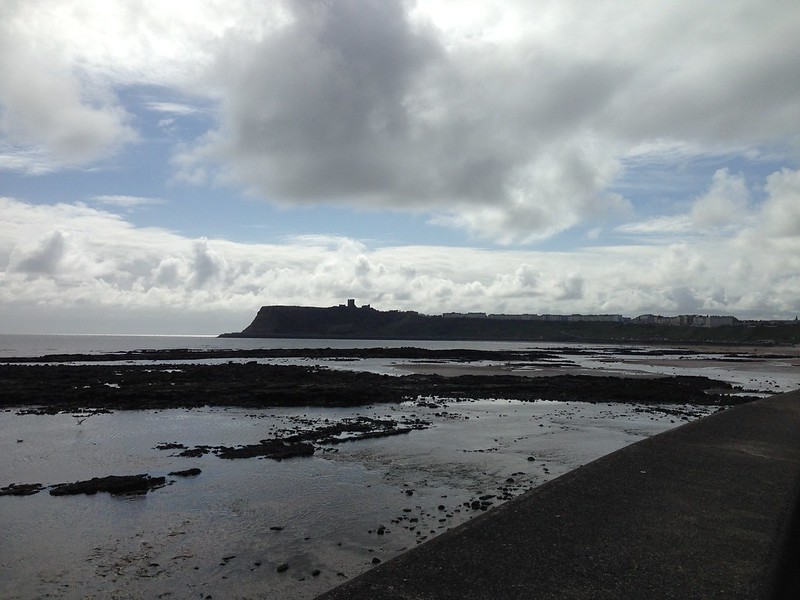 The facilities and pitch at Scarborough RUFC were amazing and the boys really enjoyed their game.

In the afternoon, we went to a water park with a wave pool and lots of slides for the kids and open-air heated pools and lager for the dads. The sun was shining, but the wind was artic, so this was a very odd experience. I could see that a second beer was likely to follow hard on the heels of the first, and knowing that mid-afternoon drinking would wipe me out, I decided to leave B with his friends and in the capable hands of the other dads and have a bit of a wander.

I first returned to the hostel, where one of the wardens recommended a path which follows the beck to meet the cliff-path, the Cleveland Way no-less, just north of Long Nab. I was pleased to see a hedge of Blackthorn decked in white blossom, a spring event which I always look forward to, but which I seem to have missed this year at home. 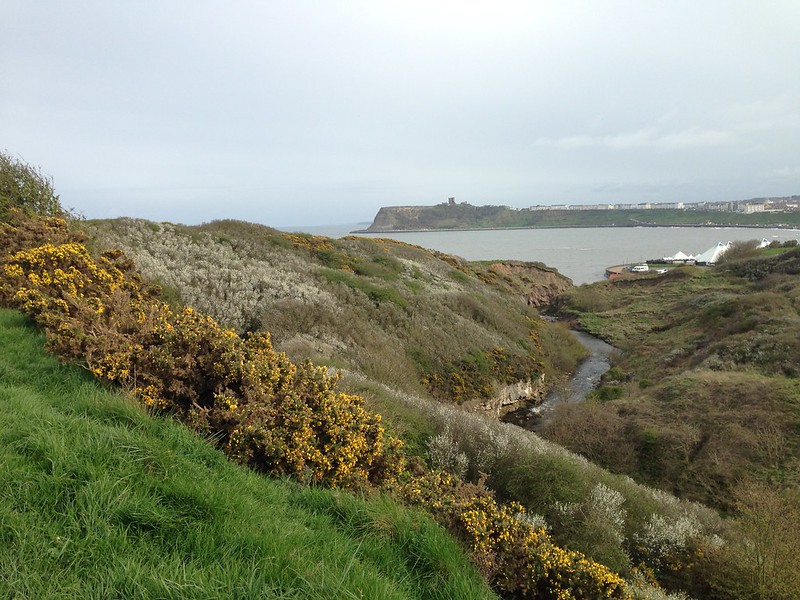 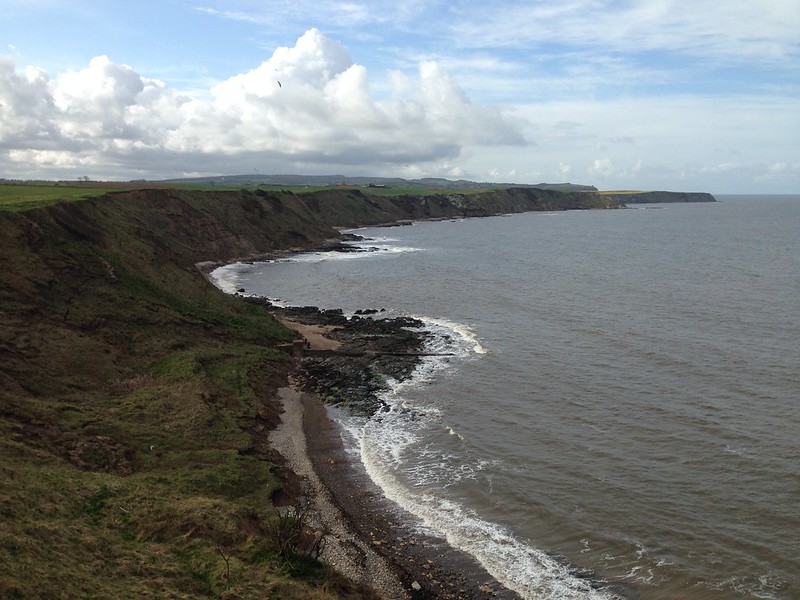 My first thought when I reached the cliffs was that I must walk the Cleveland Way some time. It’s an idea I’ve often entertained.

I was pleasantly surprised to see Alexanders… 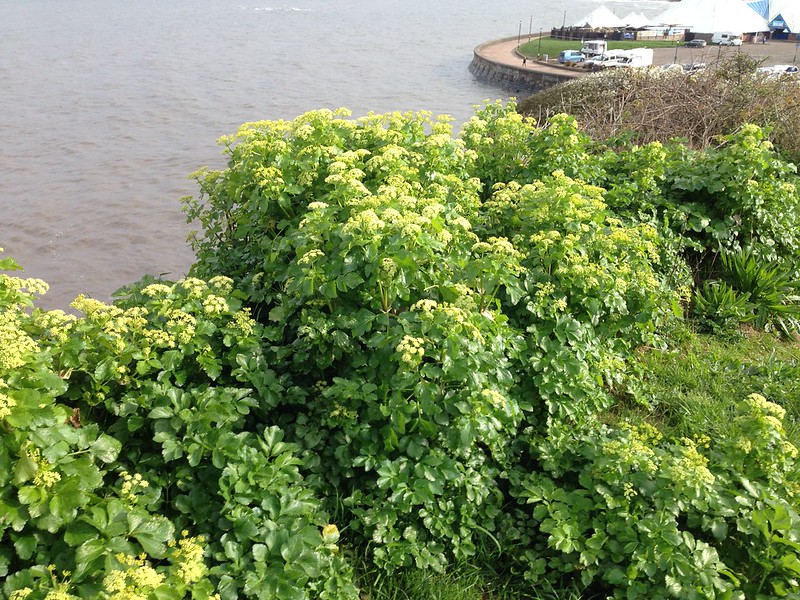 …growing abundantly in several places on my walk. They’re unmistakable, even though it’s eight years since I last saw them, when we were down in Cornwall. 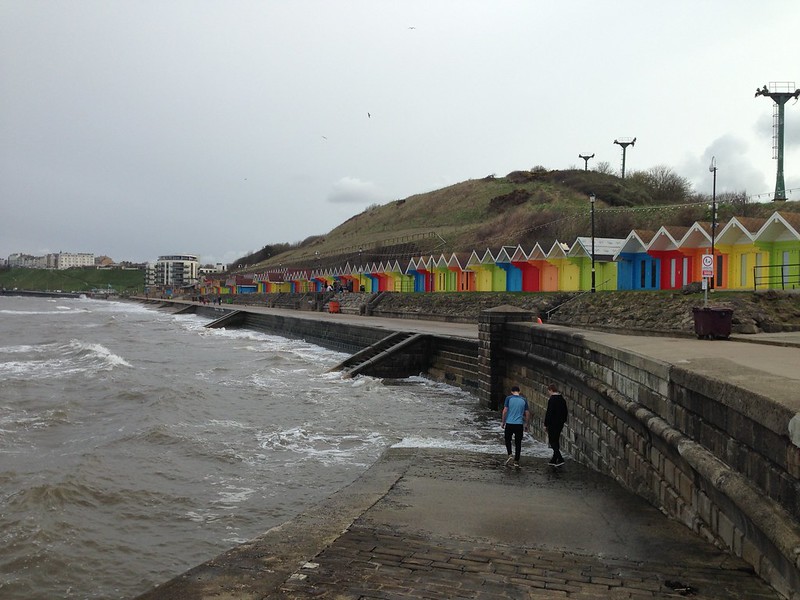 My walk took me along the sea-front, which was being splashed by waves.

And then up to the grand houses of Queen’s Parade. 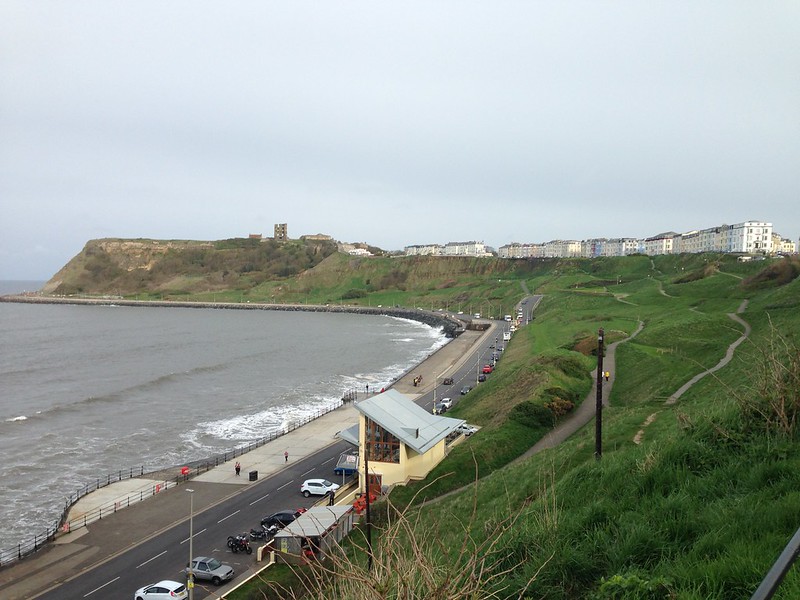 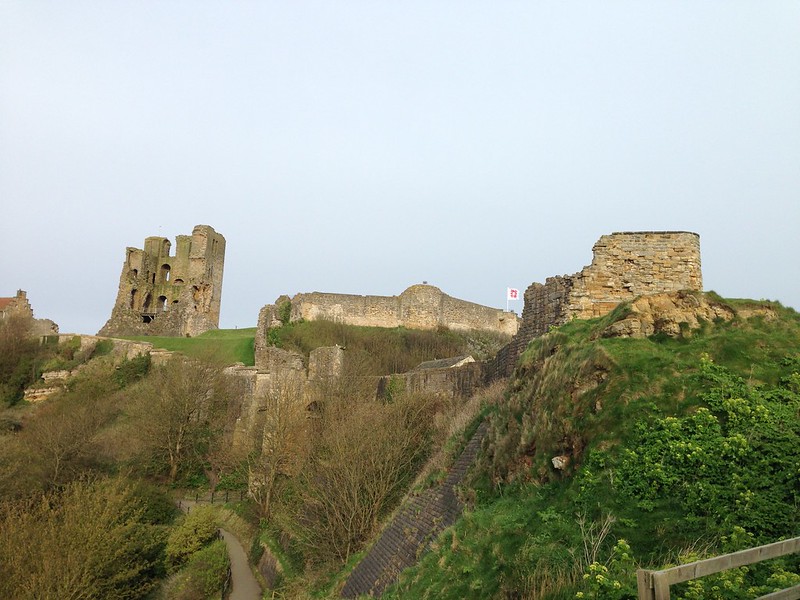 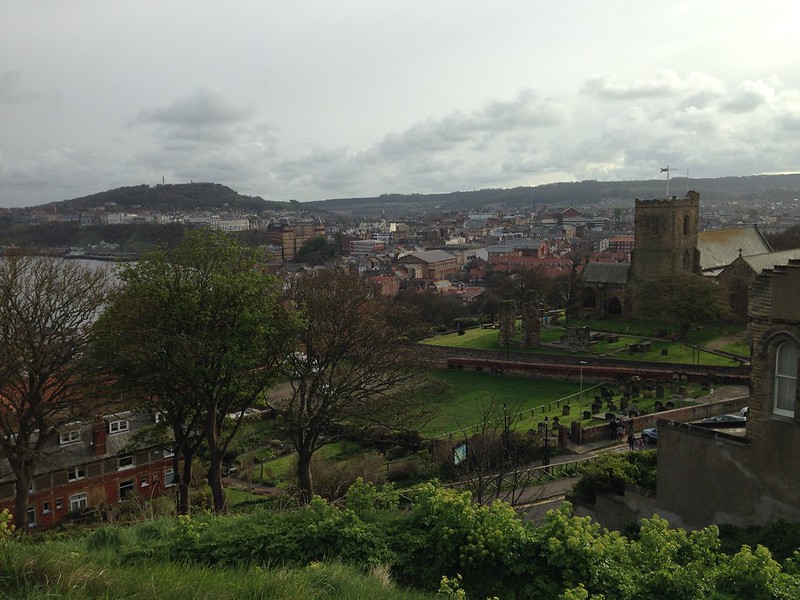 South Bay from near the Castle. 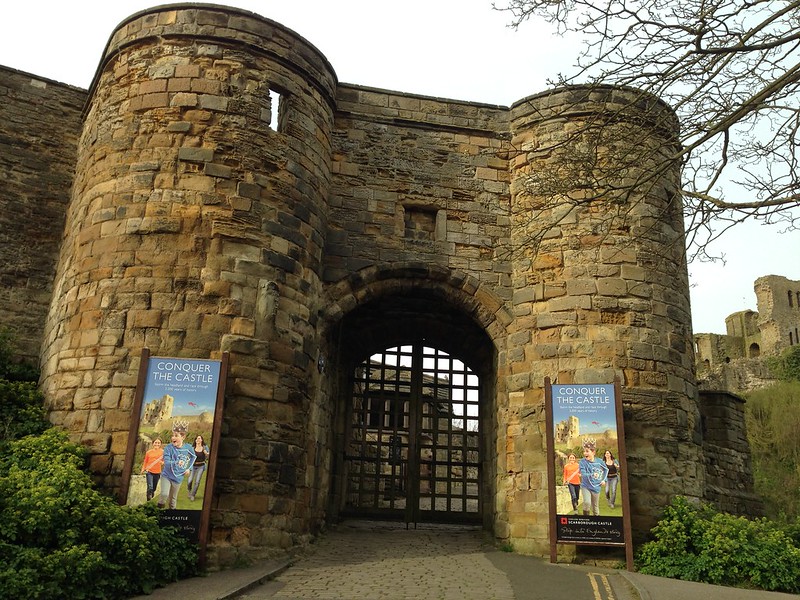 The Castle was just closing as I arrived, not that I had time for a visit. Another time.

I dropped down through a park, full of Alexanders, called The Holms and then back along the sea-front to the hostel. 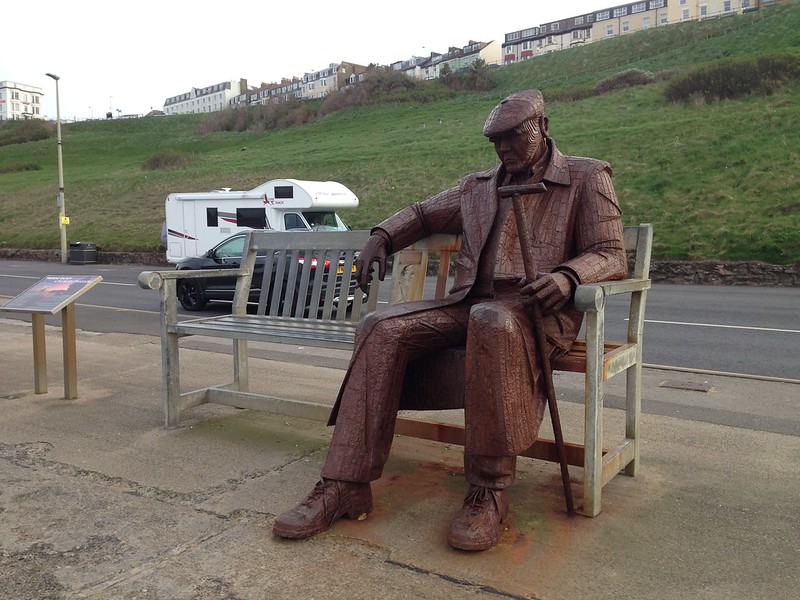 ‘Freddie Gilroy and the Belsen Stragglers.’ by Ray Lonsdale.

“The sculpture is based on a retired miner Ray became friends with who turned out to also be one of the first soldiers to relieve the Bergen-Belsen concentration camp at the end of World War II.

This piece of art is not just about Freddie Gilroy but represents all the normal people that were pulled out of an ordinary life and forced into a very extraordinary and dangerous one during the World Wars.”

The statue is huge, perhaps twice life-size and very striking.

All-told the walk was almost exactly 5 miles, so I had an answer for those who had been wondering in the morning.

The following day we were in York for another match. Then last weekend, Little S was away on his team’s tour, this time to Dublin (accompanied by TBH). Both tours were superbly organised and very friendly, and great experiences for the boys. What’s more, I enjoyed myself too.