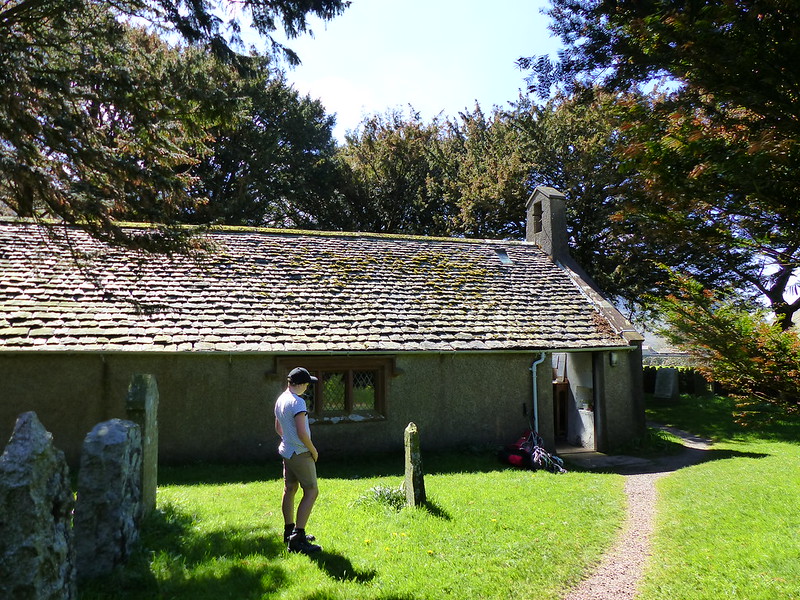 A’s DofE training finished earlier than I had anticipated and we were able to make a leisurely trip up to Nether Wasdale and still arrive with plenty of time to enjoy the sunshine and have a barbecue with some of our friends. Church Stile campsite was heaving, perhaps because of the excellent forecast, but we were able to squeeze in next to J and C and C’s schoolfriend M. It’s a good job that I’d decided not to bother with the trailer tent however, because the ‘large grass plot’ we’d paid for was far from large. Church Stile is a first rate campsite, but extra fields have been added and all of the fields were, frankly, over-full. It was still quiet and friendly, but hot water for showers or washing-up was hard to come by, there were too many people on the site for the facilities to cope with. Hopefully, this was a one off: we’ve been many times before and have always been impressed.

Anyway, rant over, back to the real business of this post: other friends of ours were scattered over the site, some in vans, some in caravans, although others were missing, and much missed.  After a very leisurely breakfast, some of us gathered together to set off for a walk. Driving down to Wasdale Head proved to be a bit of a trial, with some real muppetry on display on the narrow lanes and idiotic parking at the end of the valley, but we managed to find spaces despite our very late start.

First port of call on the walk was the tiny church at Wasdale Head. The church is very old, these roof-beams reputedly came from a Viking longship. 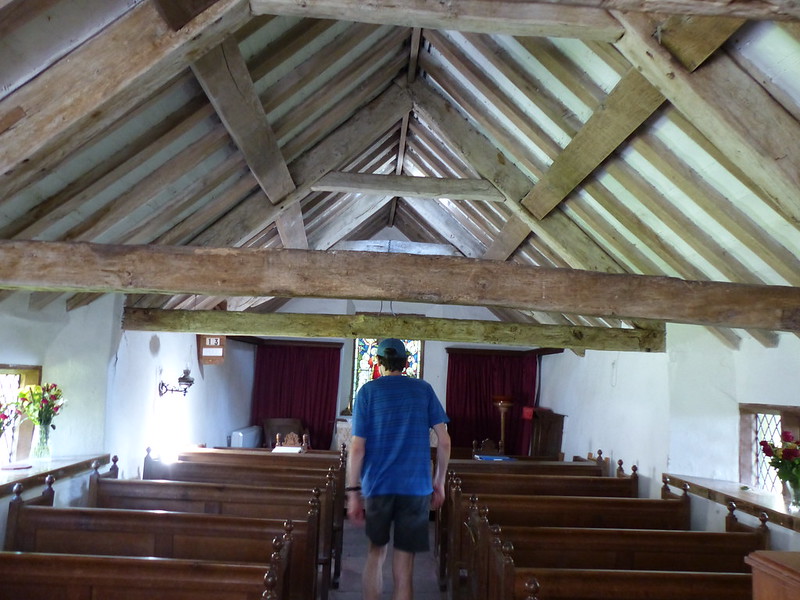 One of the windows apparently has an engraving of Napes Needle, which I seem to have missed – I shall have to go back to investigate. 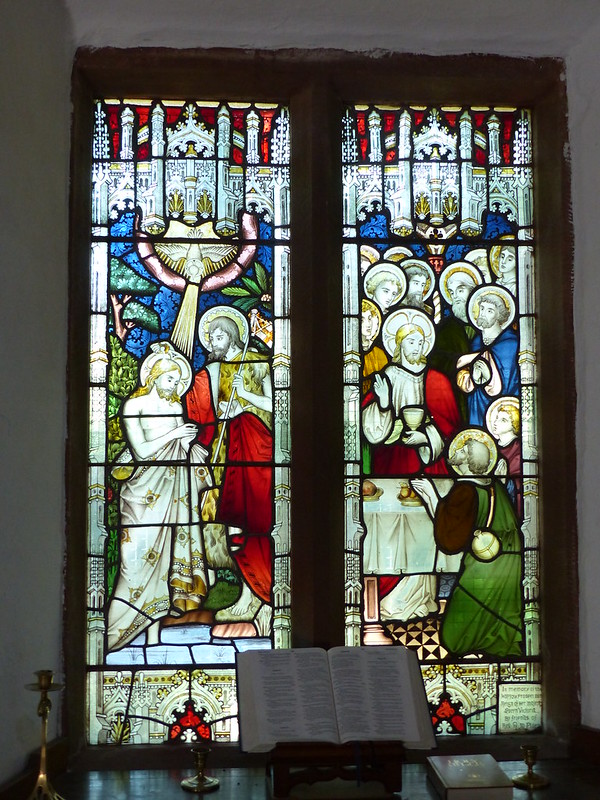 The post title pretty succinctly summarises our route. On the OS map, there’s a dotted line which follows the twists and turns of the edge of the deep ravine of Piers Gill. In years of visits to Wasdale, I’ve never climbed that path even though the prospect has always intrigued me. Time to put that right. 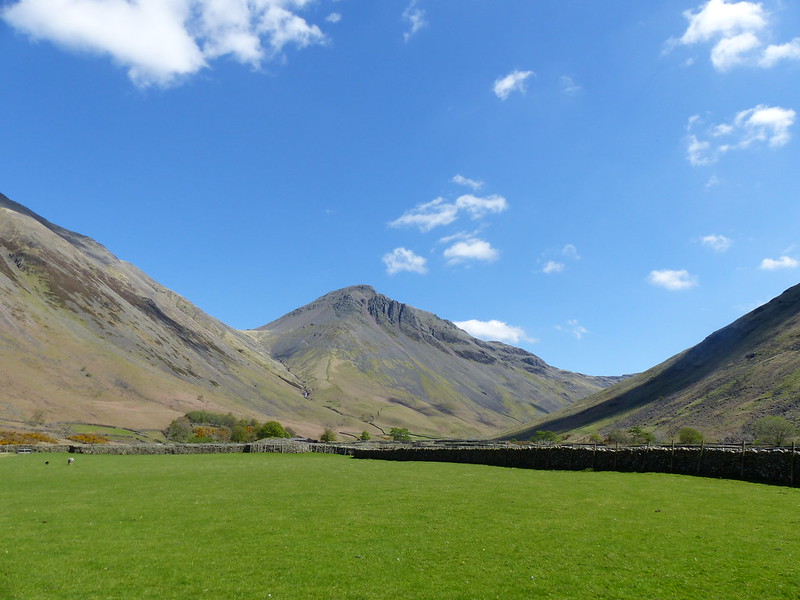 Great Gable would dominate the view all day, which is no bad thing. 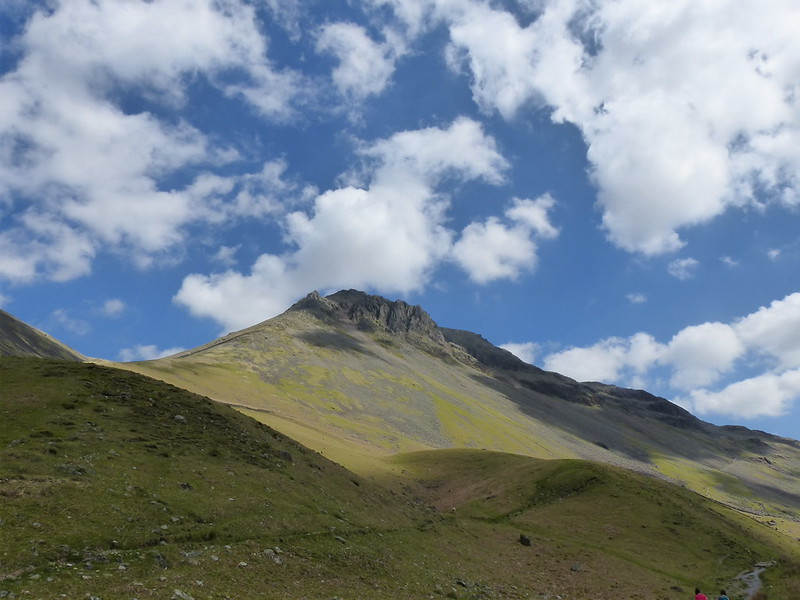 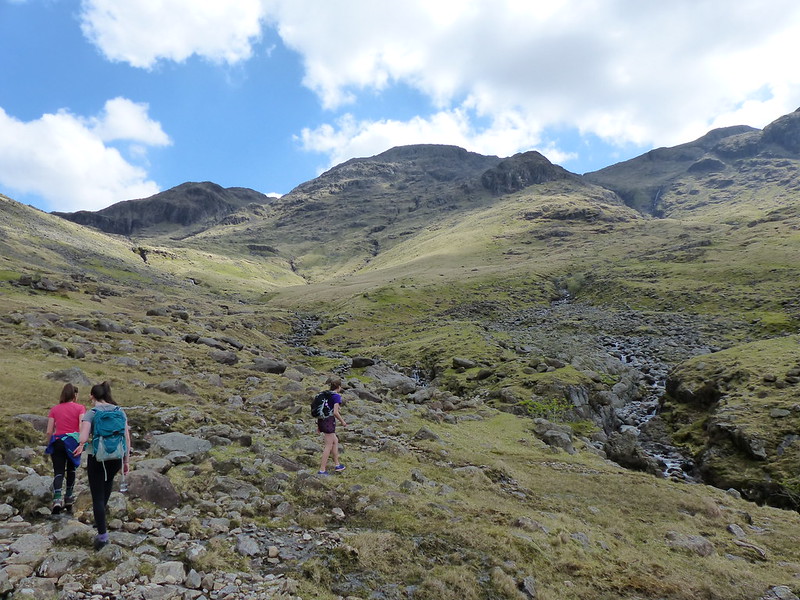 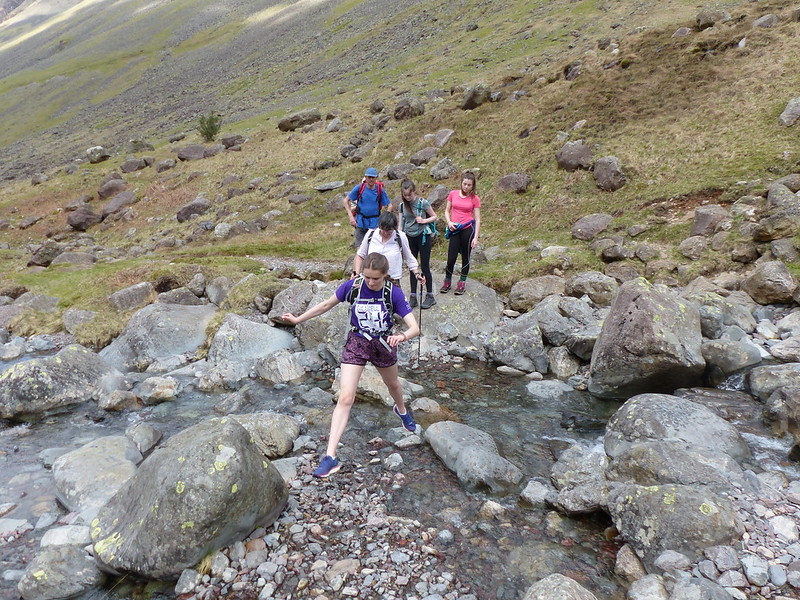 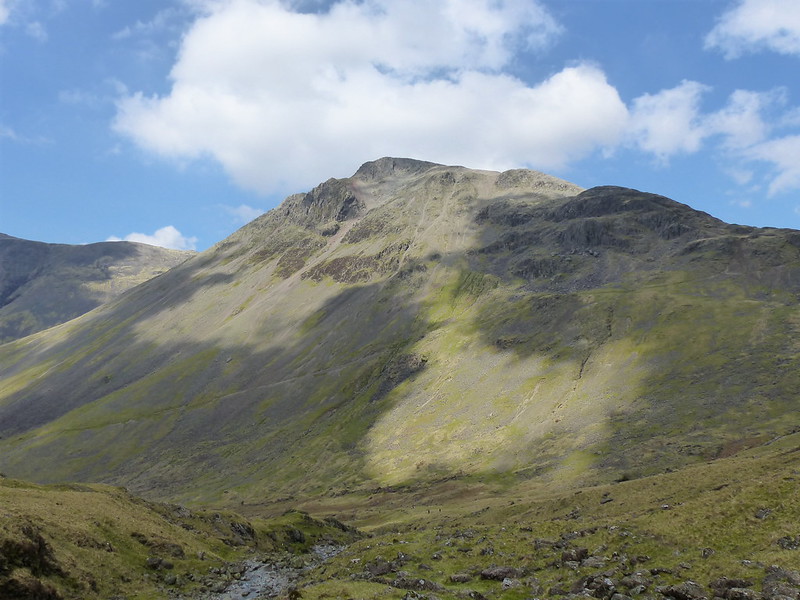 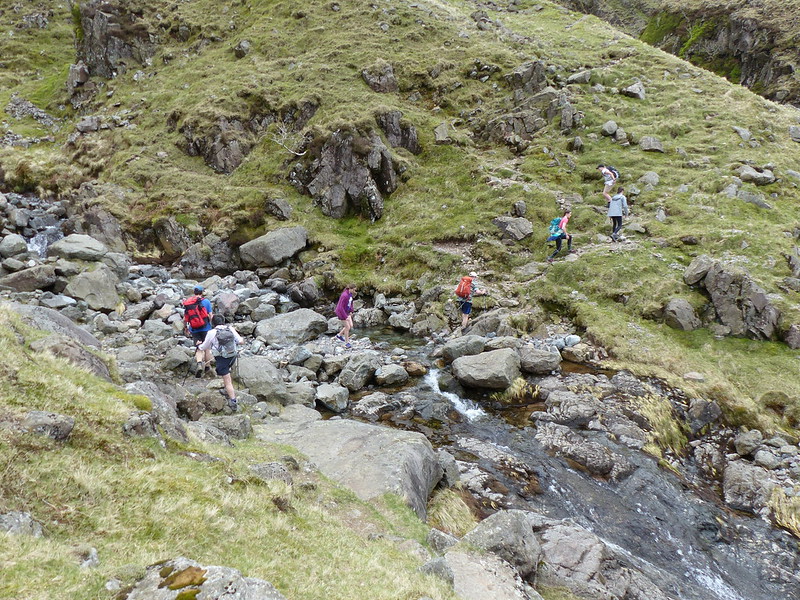 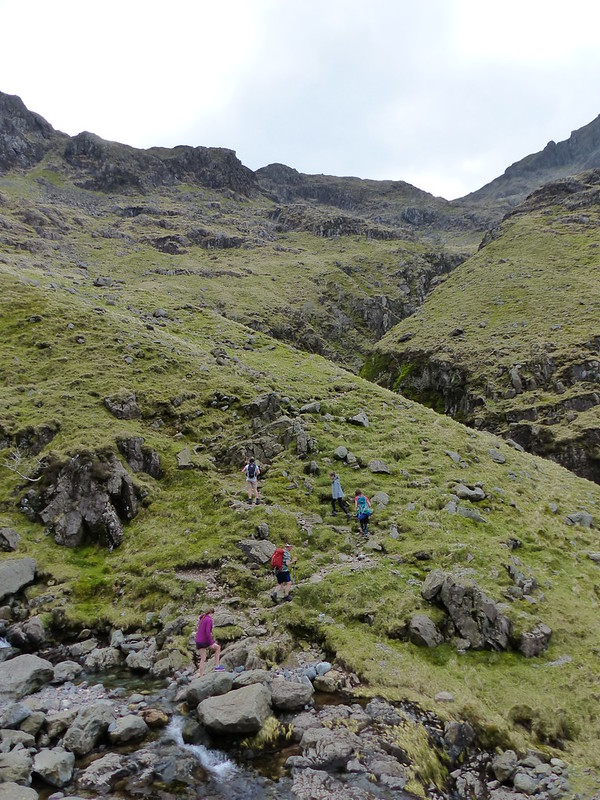 The deep cleft of Piers Gill ahead. 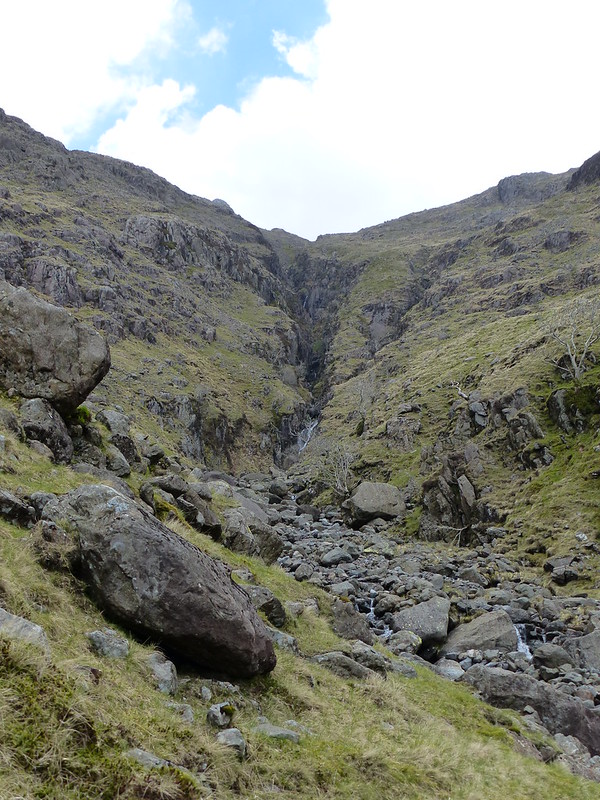 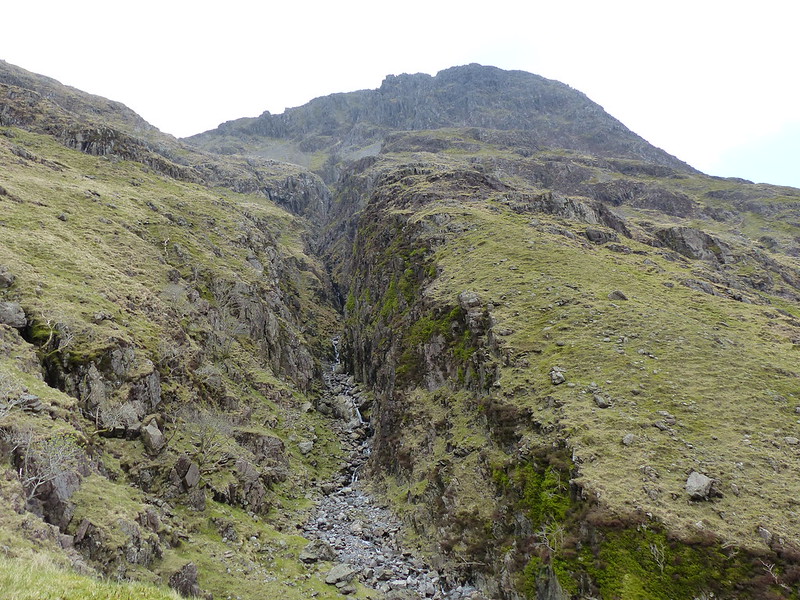 Piers Gill with Lingmell behind.

The ascent beside Piers Gill was steep and I was still suffering with a rattling cough, which is my way of saying that I was very slow and probably held the others up no end. But they should probably thank me for that: this is rough, inspiring mountain scenery which, in my opinion, has no equal, in England at least. I can think of hills in Scotland which are crag-bound and steep and as awe-inspiringly formidable as this area, but I can’t think of a match in the Lakes. There was even a little easy scrambling to be had – which was highly amusing, as the children were solicitously checking that the adults were ‘alright’. 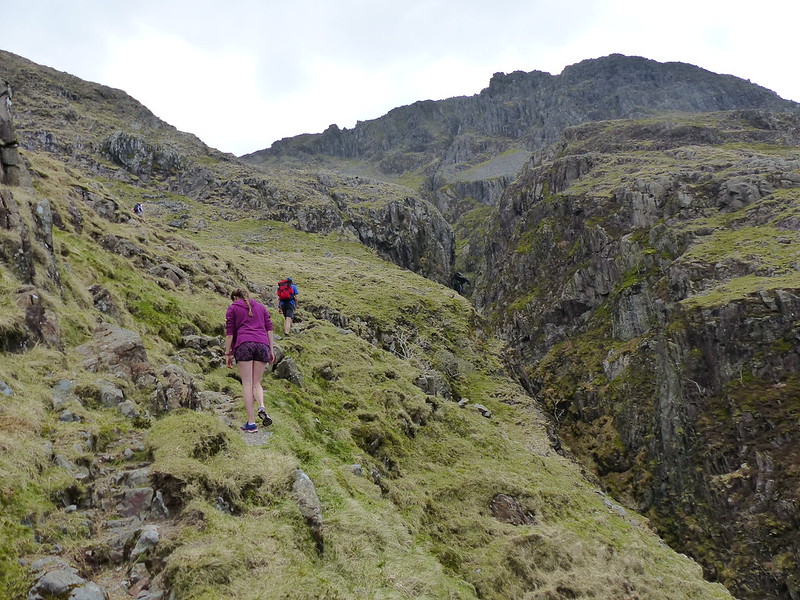 The path beside Piers Gill. 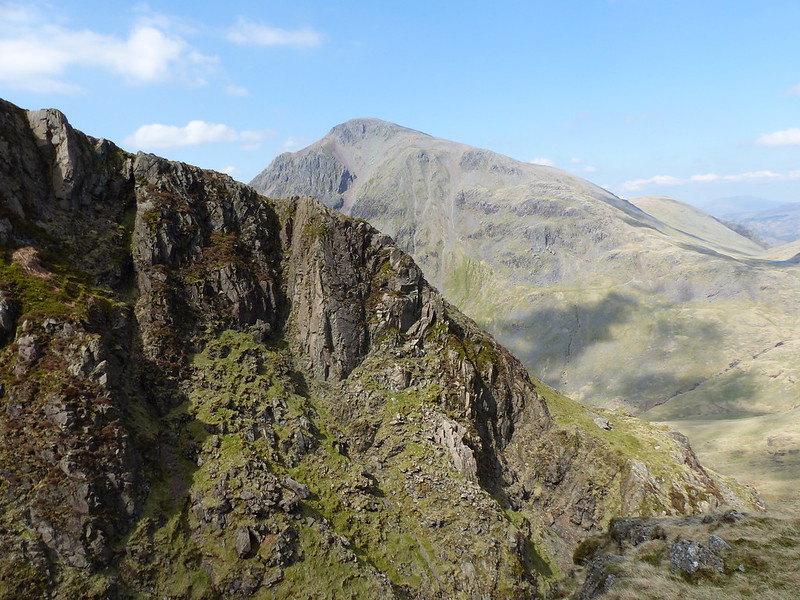 Looking across one bank of the gill to Gable (of course). 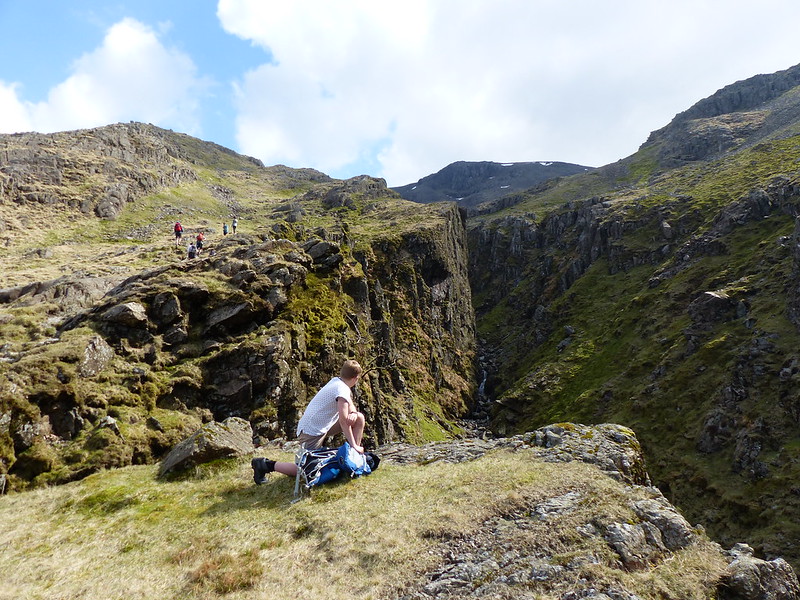 B admiring the ravine. 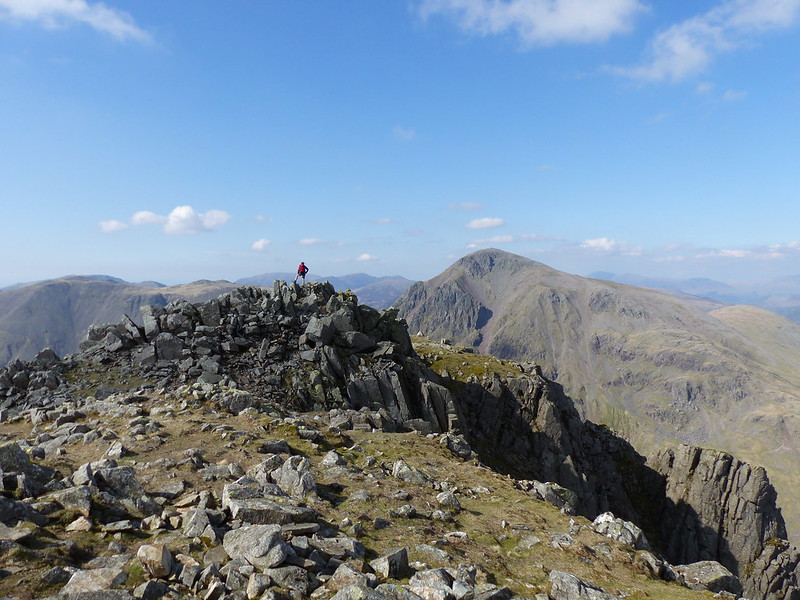 The Adopted Yorkshireman on Lingmell.

We seemed to have numerous lunch stops, but I didn’t take advantage of any of them for a collective group photo. I think I was genuinely a bit worn out. Eventually, we made it to Lingmell. 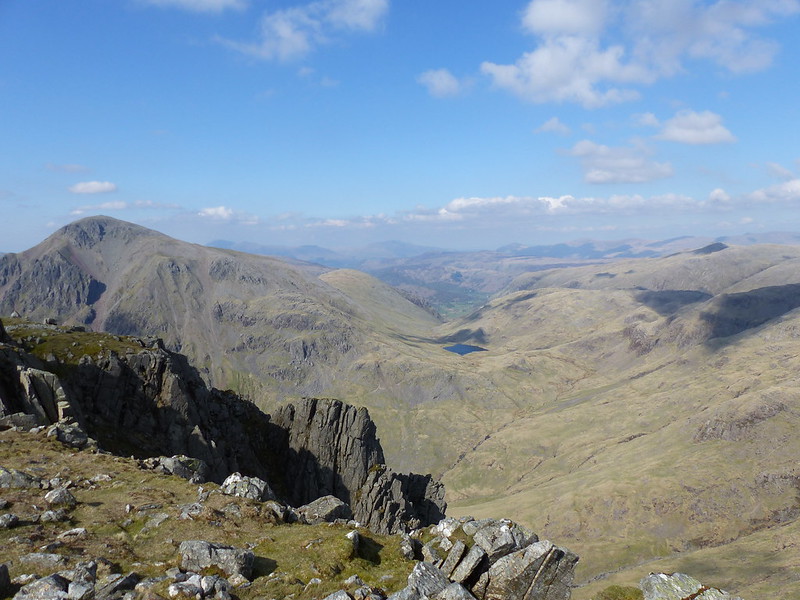 Gable and Styhead Tarn from Lingmell. 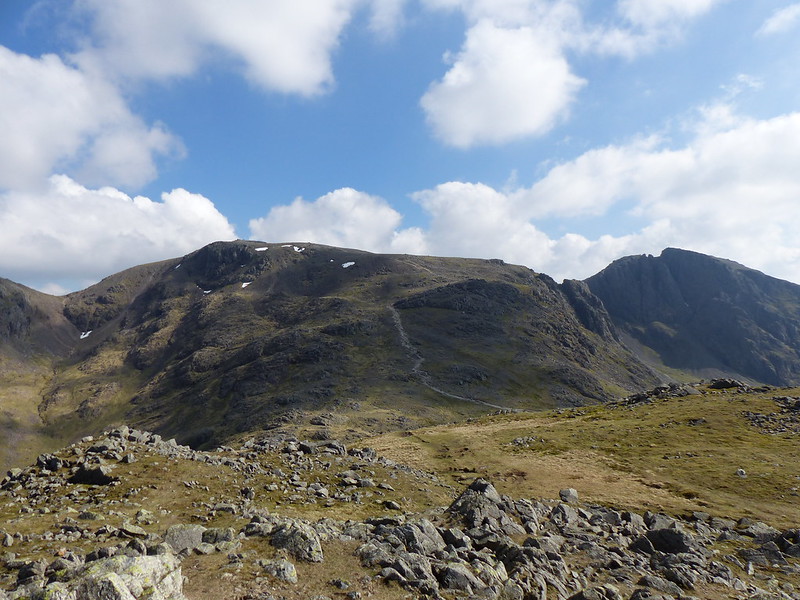 Scafell Pike and Scafell from Lingmell.

Old Father Sheffield half-mooted the idea of continuing on to Scafell Pike, but his suggestion didn’t meet with any enthusiasm. Scafell Pike is always thronged, even on a rotten day, and today it looked like it was absolutely overrun. Besides which, A and B and I were up there relatively recently. And I was already cream-crackered. 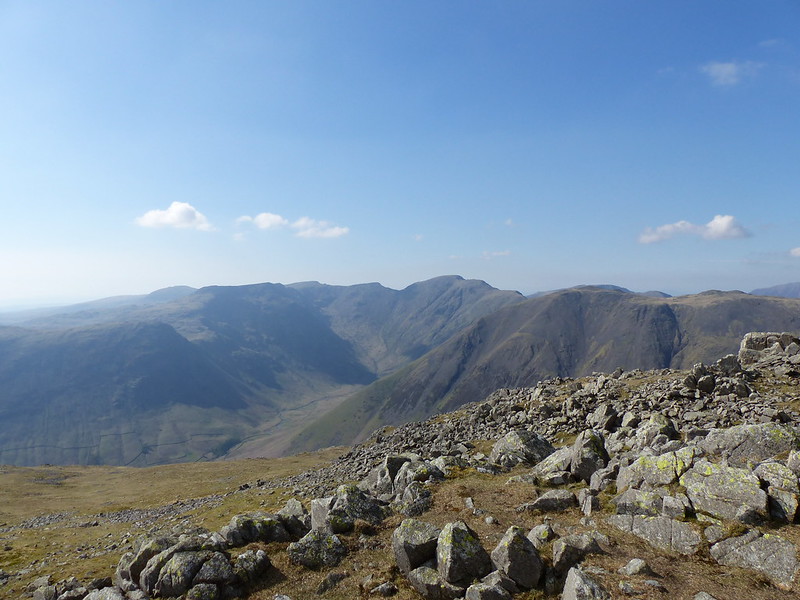 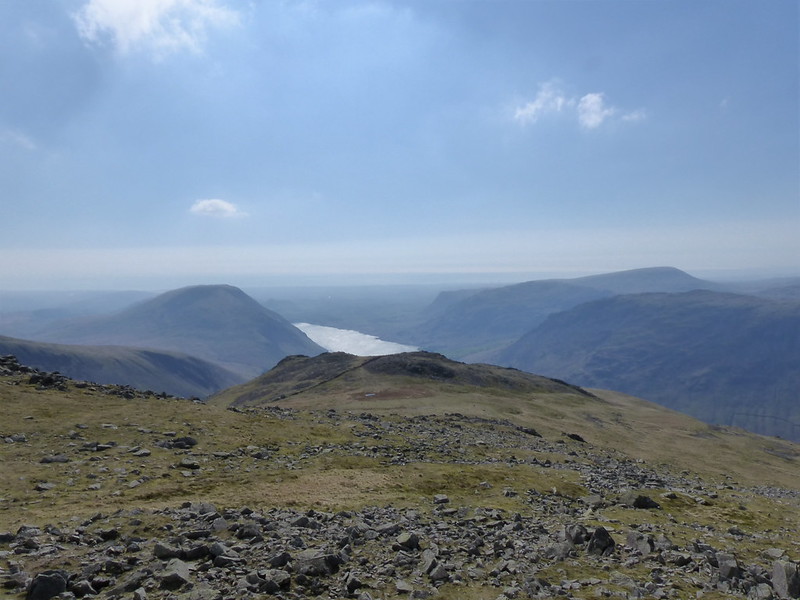 The Screes and Wastwater. 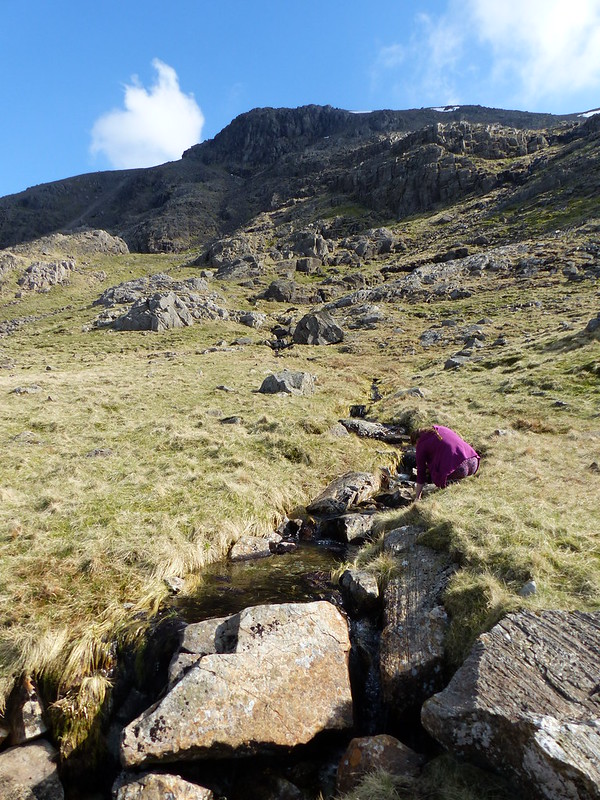 A filling our bottles from one of the streams which feed Piers Gill. 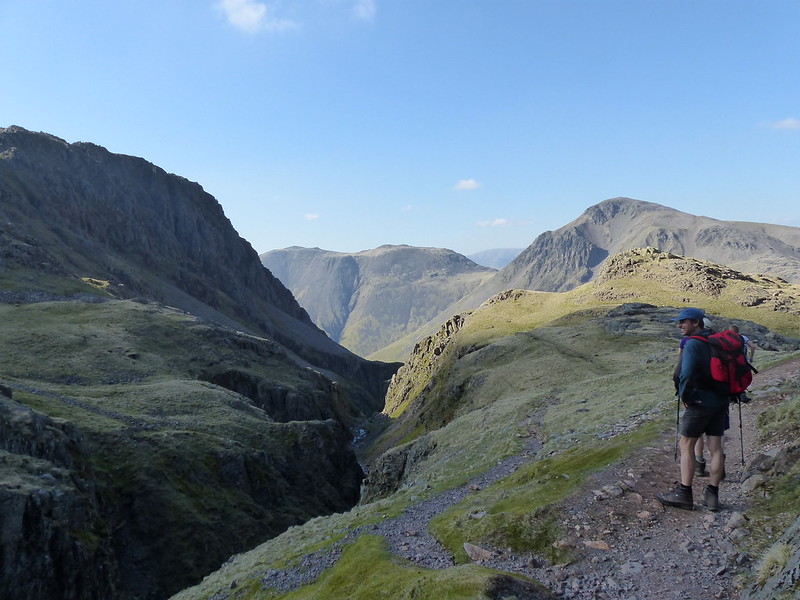 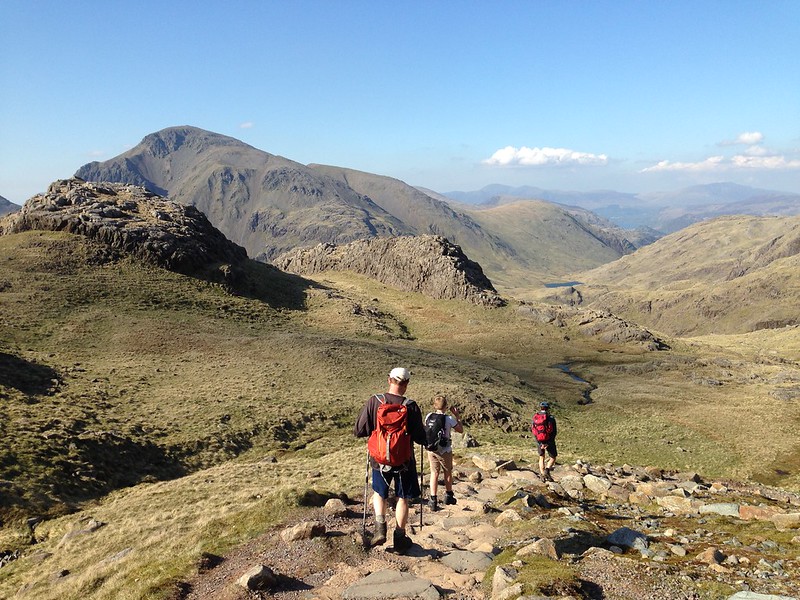 Heading down the Corridor Route. OFS seems to have a hankie on his head. I think it was actually an Eddy Merckx style cycling cap. 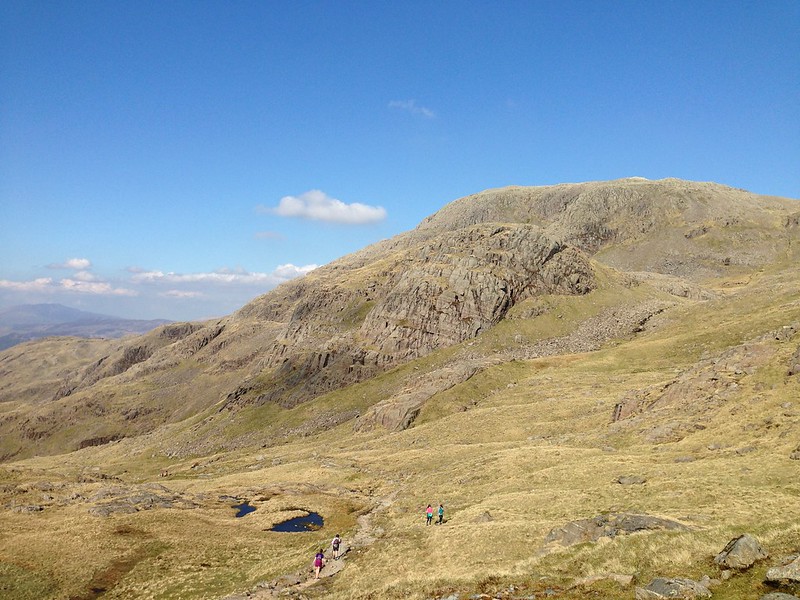 Round How and Great End.

I suggested diverting to Round How and Lambfoot Dub, but then decided that was too much effort and left the AYM to do it on his own. 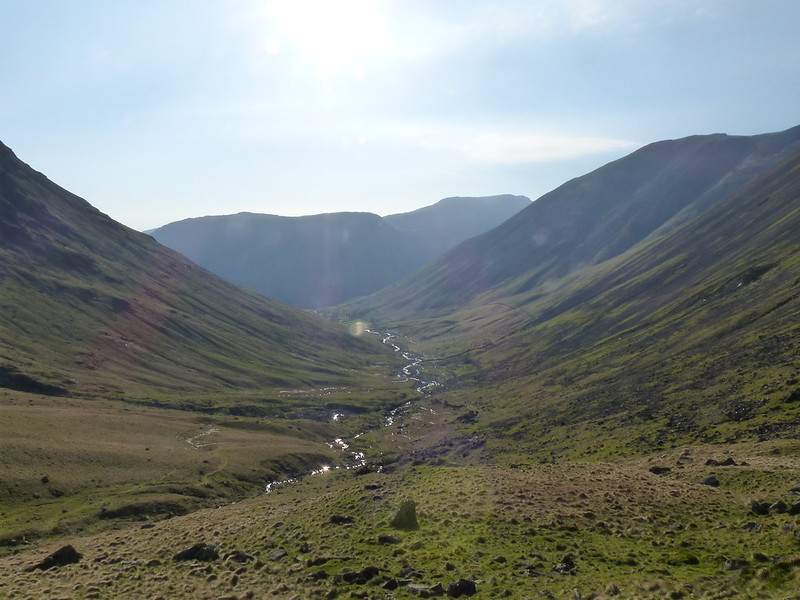 Looking back down the valley towards Wasdale Head. 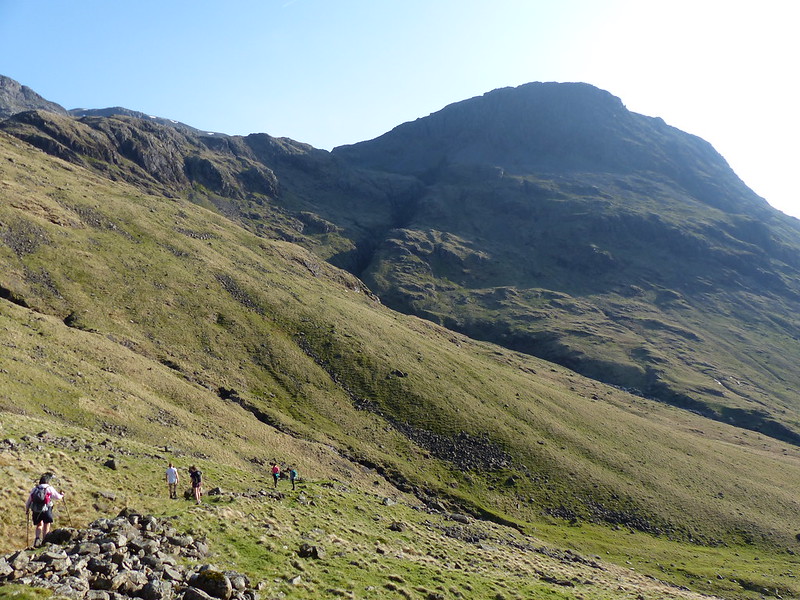 Piers Gill and Lingmell from our descent route.

We came down a superb, well-made path, clearly very old, with nice easy zig-zags. I felt sure that I had been down this way before, perhaps it was with CJ when we stayed at the Wasdale Head Hotel. 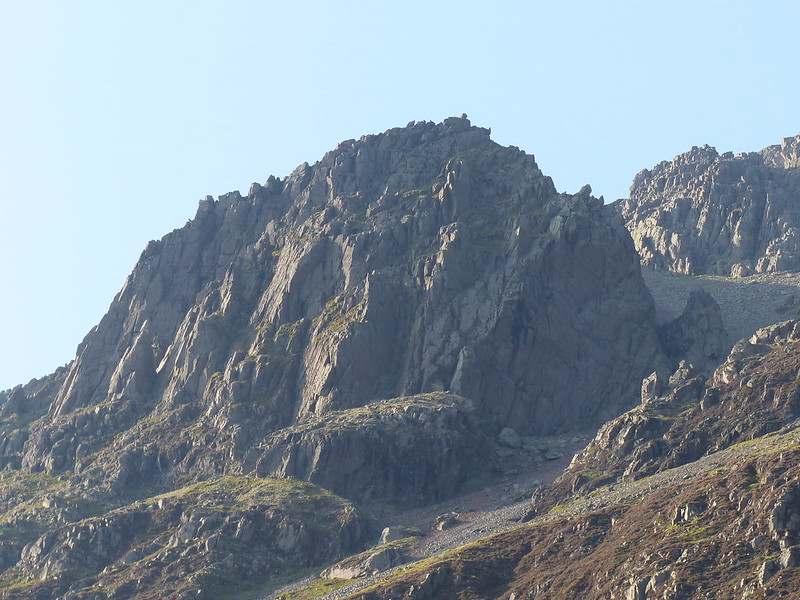 Napes Needle on the left. (I think). 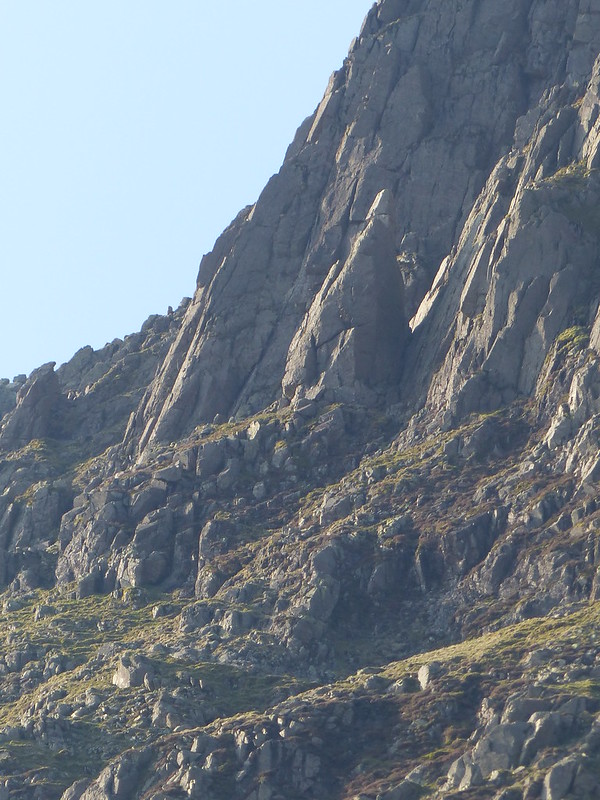 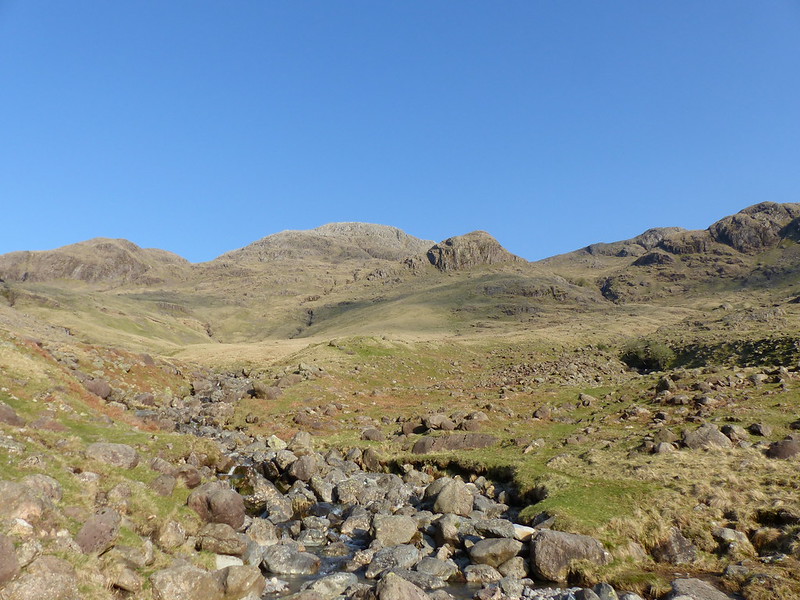 A superb day. I’ve been walking in these hills, with these same friends (well, the AYM anyway), for over thirty years. I hope that this day will live as long in the memories of the four children who were with us as many of my previous outings have with me.

Later, back at the campsite, another barbecue. B and I had Church Stile’s own Herdwick burgers, which were delicious. Then, for the second night running, a chinwag around a wood-fire burning in the portable fire-pit which TBH bought me for Christmas. B tended the fire whilst I sampled some Ennerdale Brewery Beer. I didn’t know there was an Ennerdale Brewery until I saw some bottles in the camp site shop, but I can now report that their beers are very palatable. Marvellous.

15 thoughts on “Piers Gill, Lingmell and the Corridor Route.”