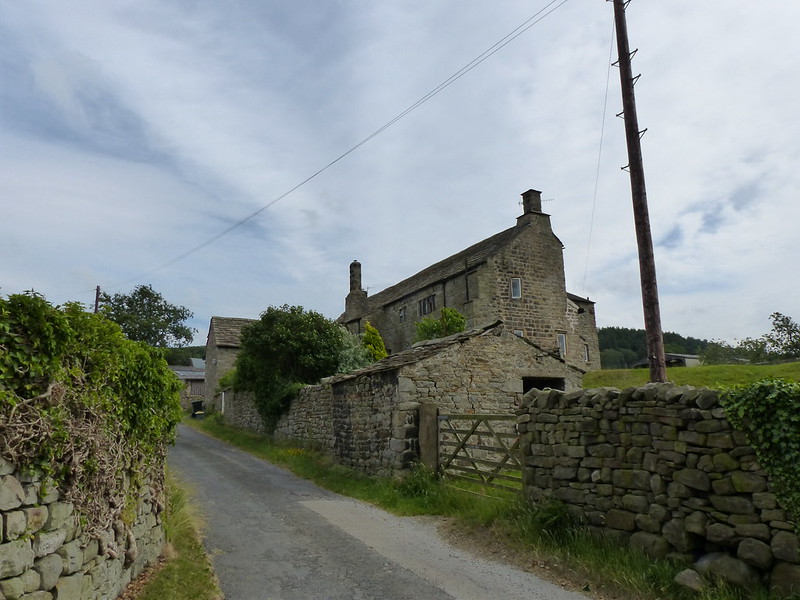 A mid-week, post-work stroll. I wanted a shortish walk and not too much of a drive, so that I could guarantee an early finish. For one thing, I wanted to get back to take B to Lancaster for a late start to a school-trip to France. And for another thing, the forecast was for the weather to finally break, with rain expected as the evening progressed and gale force winds in the early hours. So I’d been poring over the map, looking at Lune tributaries close to my work-place in Lancaster. The slopes behind the villages of Caton and Claughton have several streams – Mears Beck, Westend Beck, Barncroft Beck and Claughton Beck – to which there is, frustratingly, little or no access. However, whilst inspecting these I inevitably noticed the gothic script close by denoting Claughton Hall and was instantly intrigued. A quick search on the internet and I knew that this was something I had to go and see for myself – “Large house, c.1600 with C15th remains, moved to present site and rebuilt 1932-5.” (from Historic England).

The house, which used to be in the village of Claughton, was dismantled and rebuilt half way up the moors above the village. One wing was left in situ however, now called Claughton Hall Farm and seen in these first two photos. 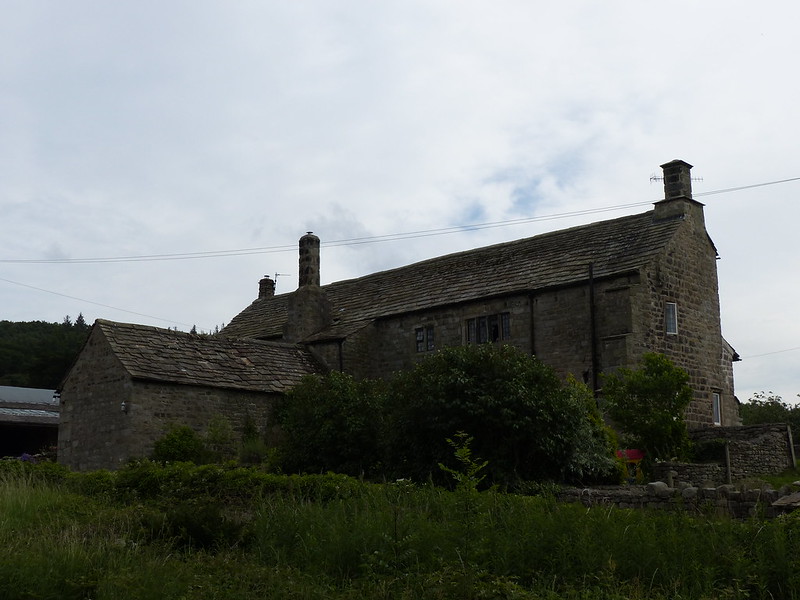 Claughton, incidentally, is pronounced Klaften by locals and probably a hundred and one other ways by the rest of us. 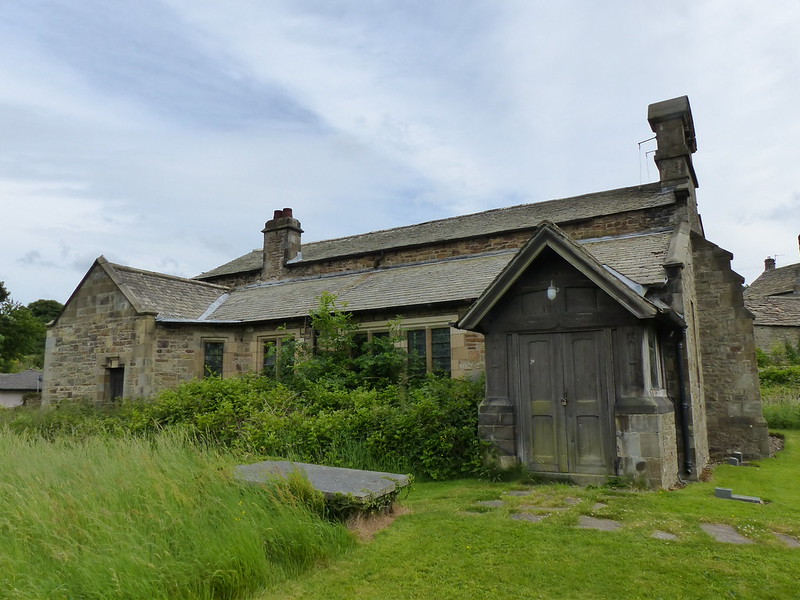 St. Chad’s Church is next to the farm. There has apparently been a church on this site for almost a thousand years, although the current building only dates back to 1815, so it’s a shame to see it locked-up and abandoned and disappearing behind thickets of weeds and saplings. 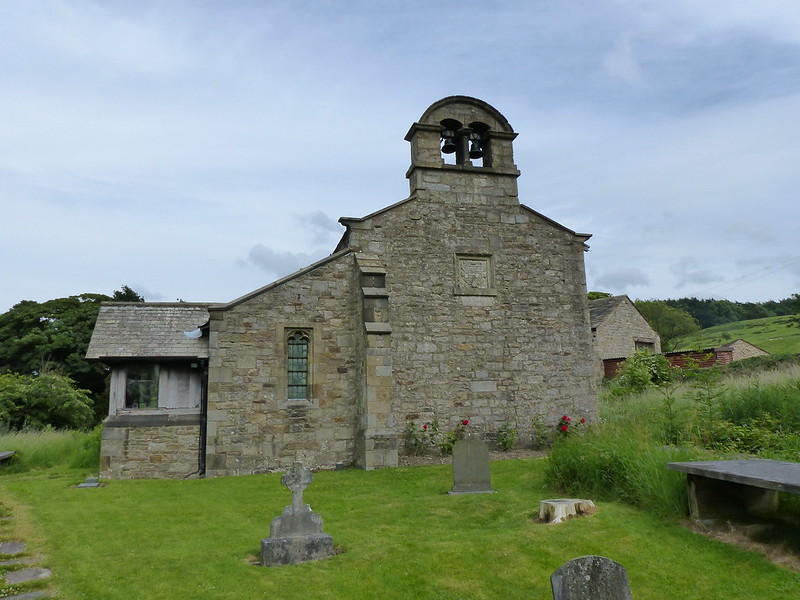 There’s only one path from Claughton which heads up into the hills so I decided just to do an out and back. There look to be a couple of other good options, but both require a little more time and effort. 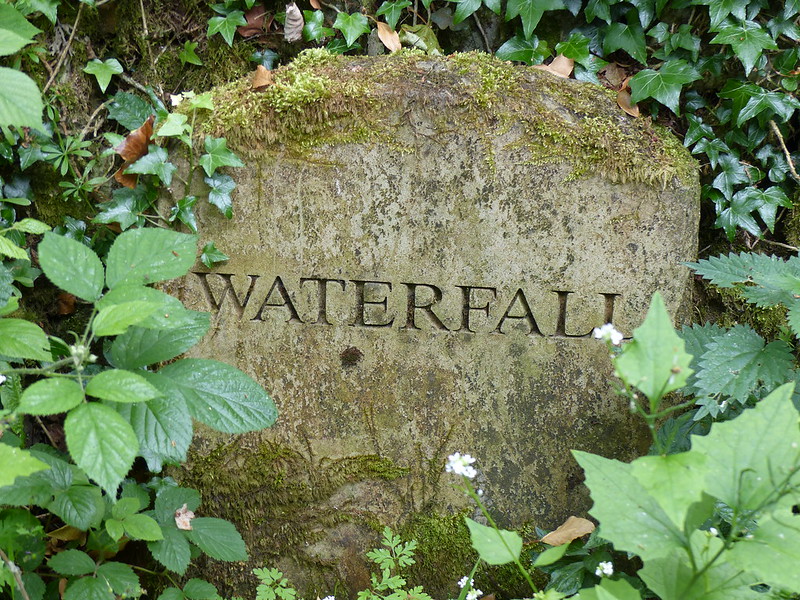 …by a path which was shadowing Claughton Beck. This seem to me like a kind invitation to visit the falls, so, pleasantly surprised, I left the track and set-off by the beck, but didn’t get far before I came across a tangle of fallen trees blocking the path and elected to turn back again… 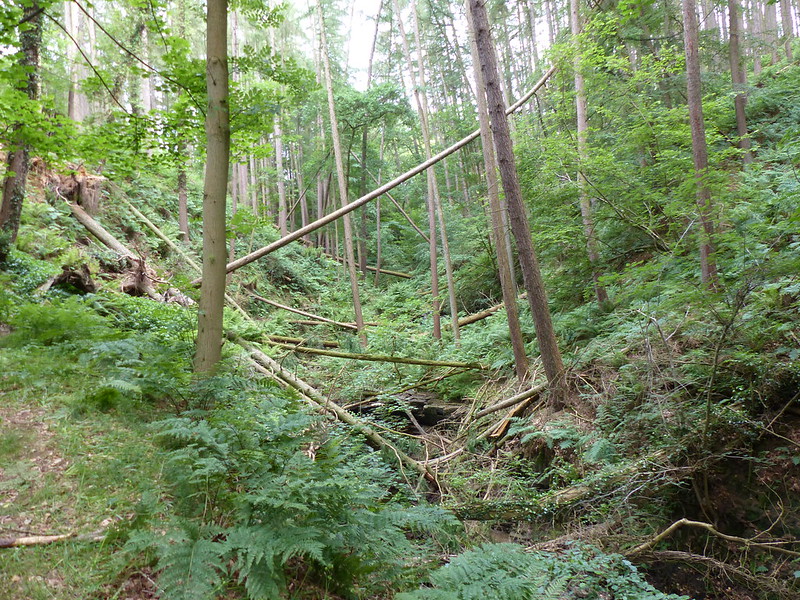 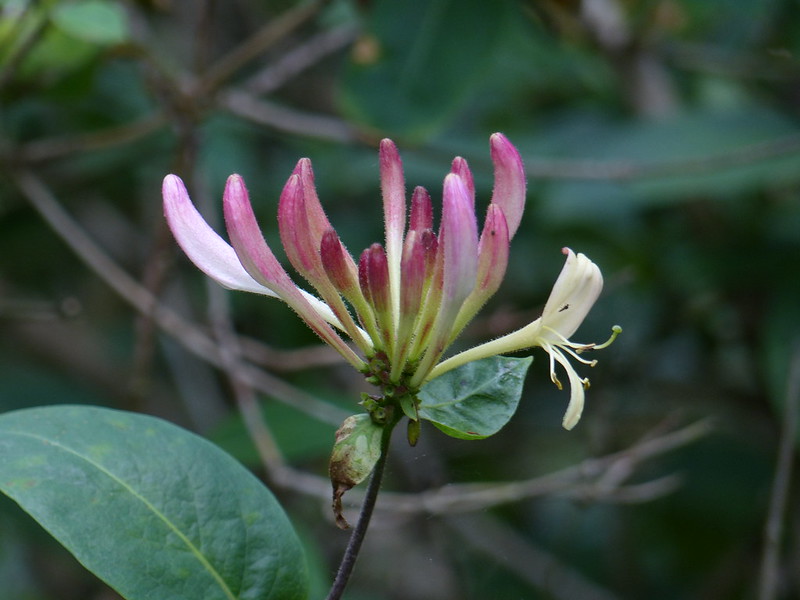 Despite the gloomy skies, I was enjoying the views down the valley to the hills around Kirkby and, dominating the view, Ingleborough. 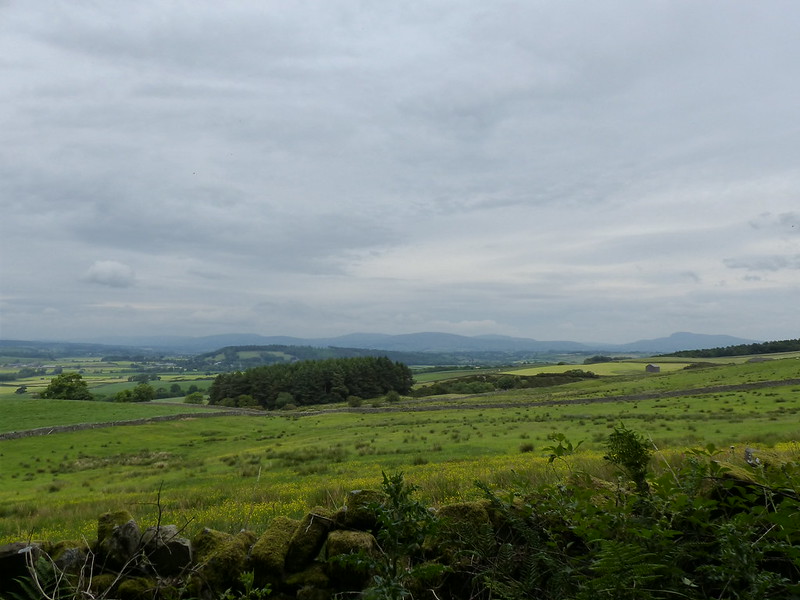 I was also intrigued by the low, partially wooded hill in the middle distance, which I now know to be Windy Bank, behind Hornby and between the Lune and the Wenning, and which is now on my list of places I need to visit for a walk.

Sadly, behind me there was no view of Claughton Hall, only a dense hedge of Leylandii, or something similar. I reflected that the impulse which drives somebody to move their home away from a village and half-way up a hill might also lead them to screen themselves completely from the outside world, but I’ve since discovered that the hall could still be photographed from the track relatively recently. The gateway was open and I suppose I could have taken a wander down the drive, but I’ve settled instead for a photo of the hall, from around 1910, before it was moved… 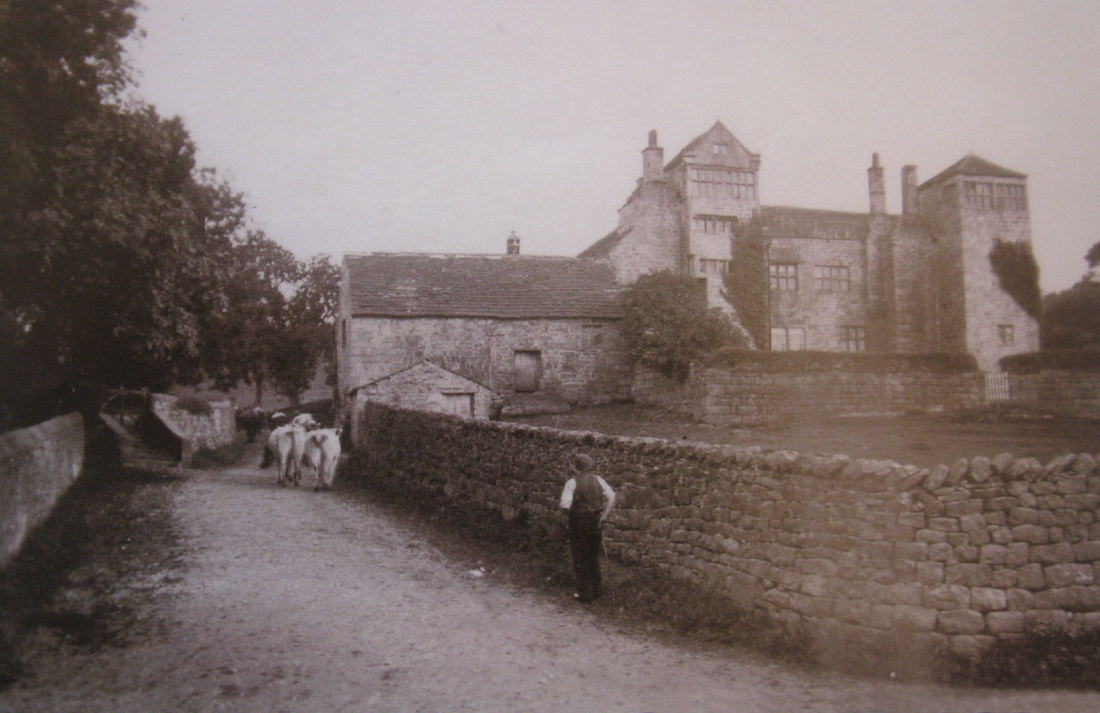 From this point on, the walk turned into a bit of a birding excursion, as these Lune Catchment walks have often been prone to do. 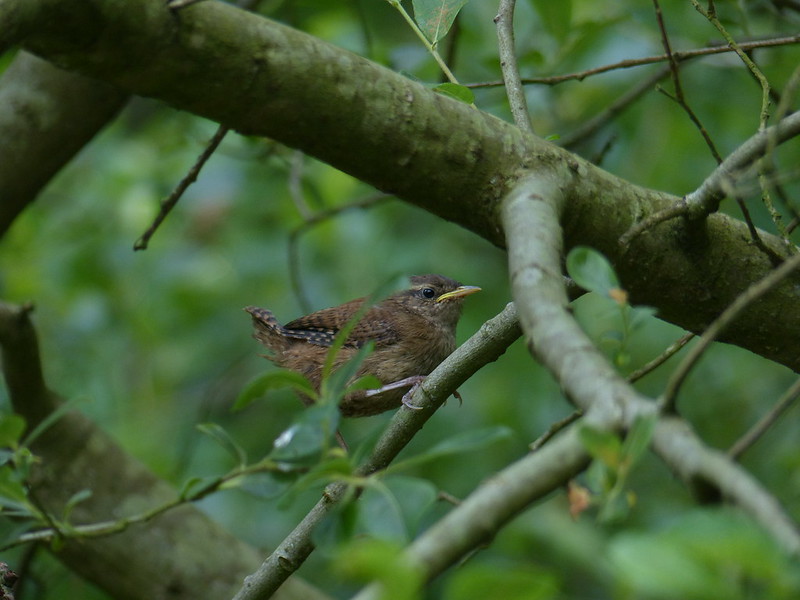 Juvenile Wren, at least I think it’s a juvenile.

It may partly be to do with the time of year: there are lots of fledglings about and they don’t seem to share the caution of their parents. Then to, the parents themselves are busy fussing over their brood, providing food and guidance. 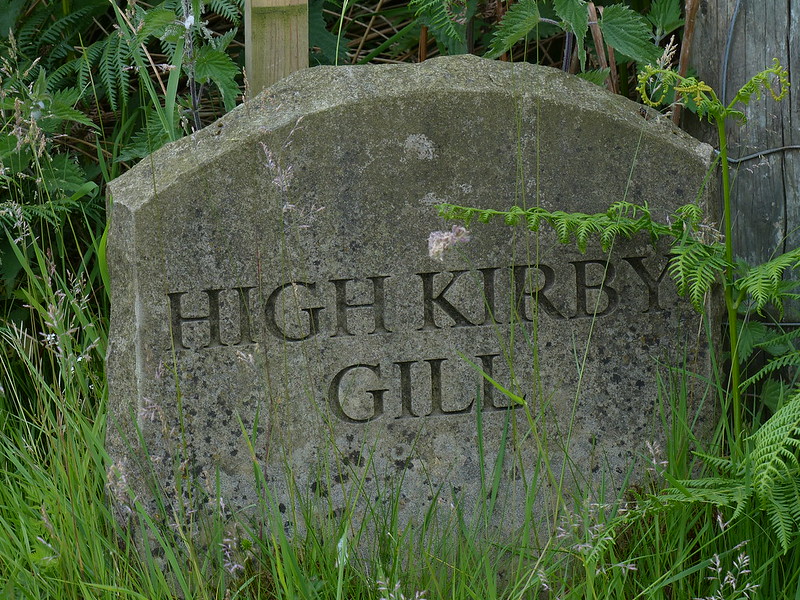 Along the track there were several more of these curious headstones and I began to think that perhaps they weren’t an open invitation to the hoi-polloi like me. Maybe they’re for visitors to the hall? 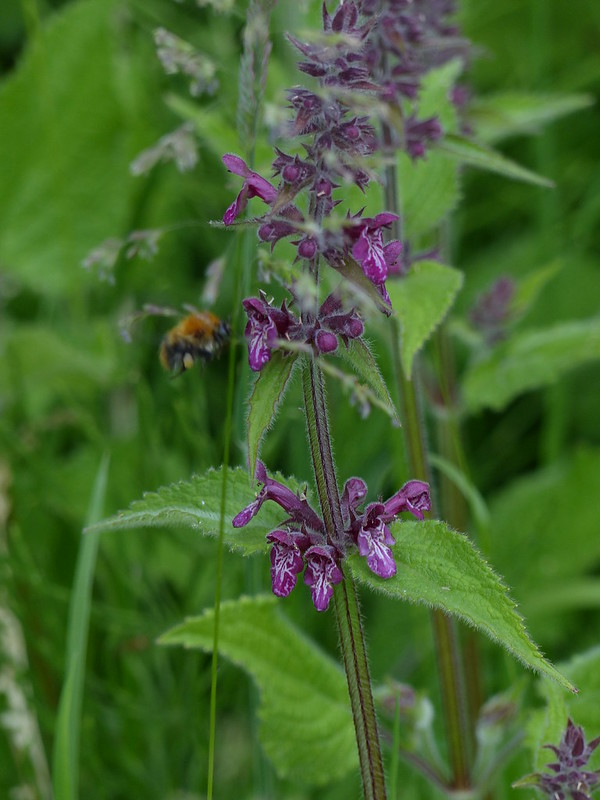 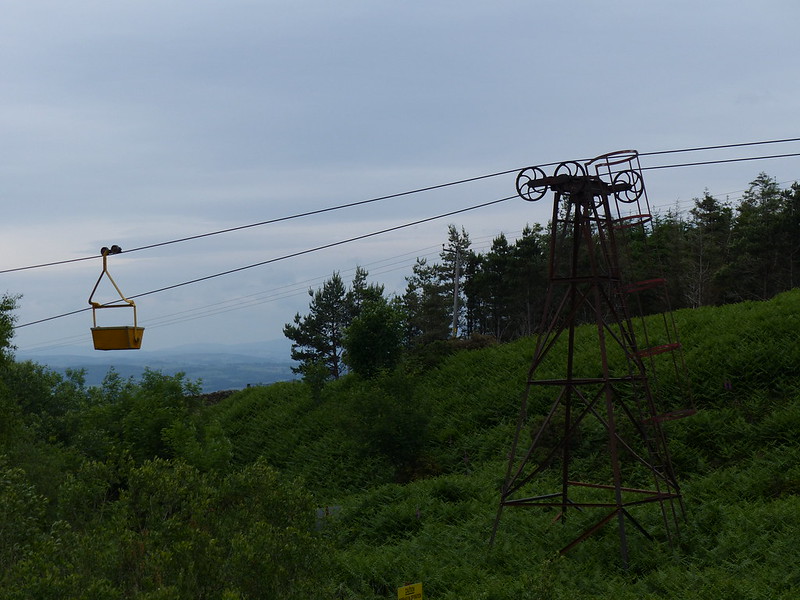 This strikes me as unusual, although I’ve no real idea whether it is or not: Claughton has a brickworks which is supplied from a clay-pit (essentially a large quarry) on the hillside above, via this aerial ropeway. 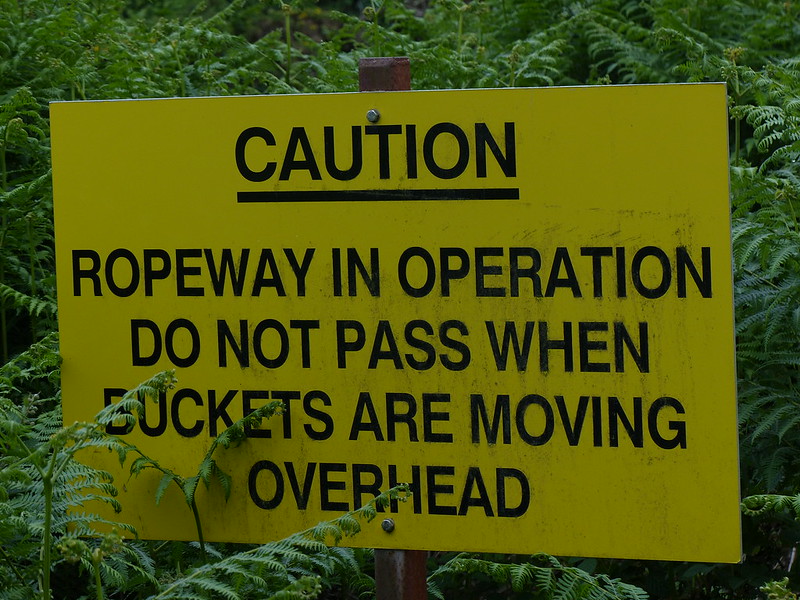 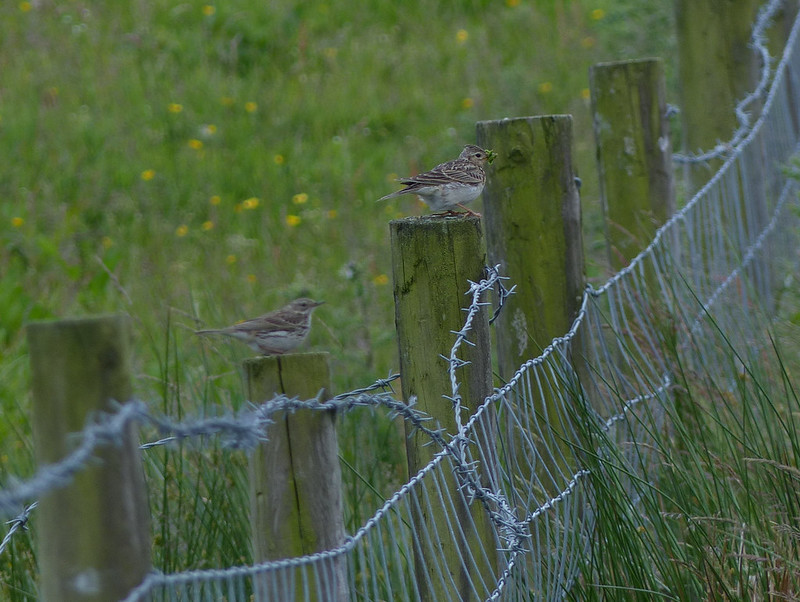 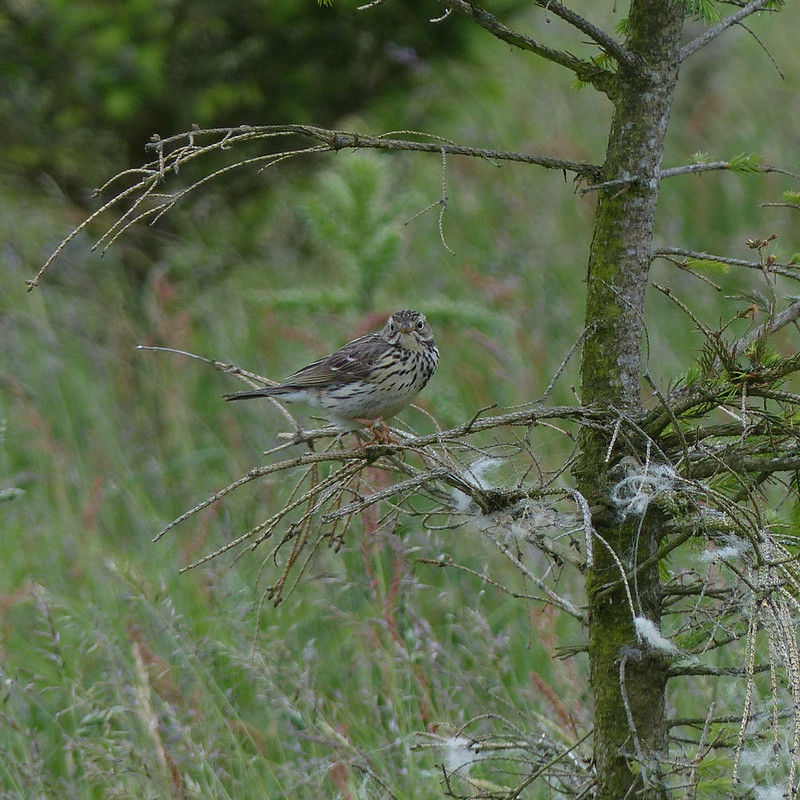 I passed Moorcock Hall, a farm, and then the wind-farm on Caton Moor. The towers are huge and, up close, a bit oppressive. 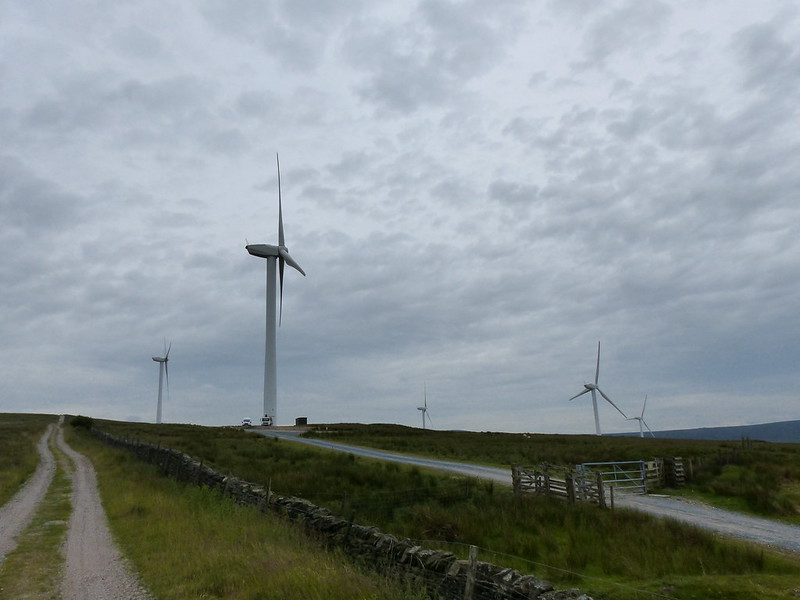 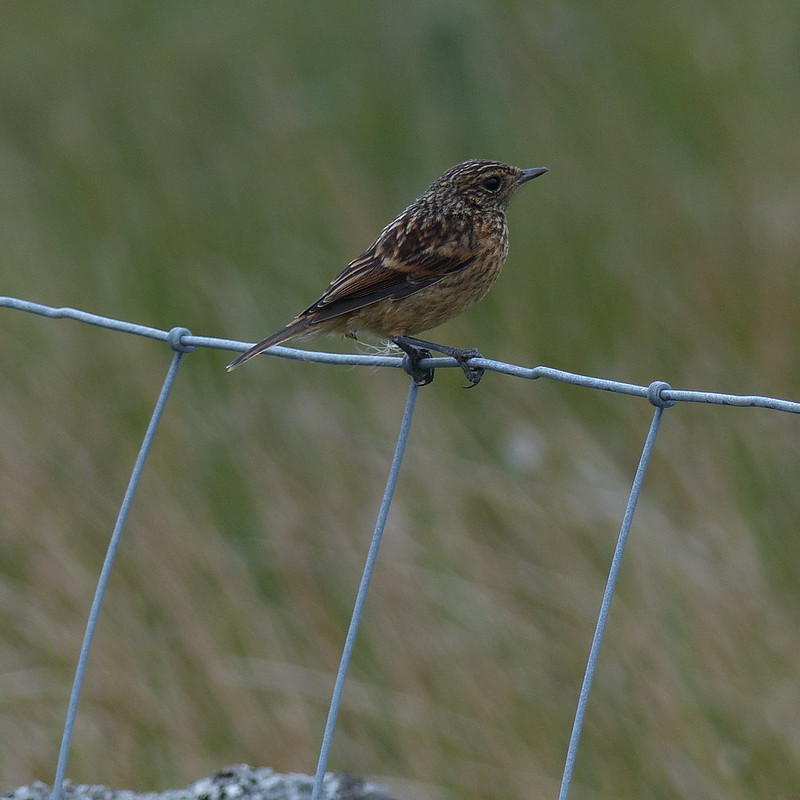 I was convinced that this must be a juvenile Stonechat. I’m not sure why I was so sure, since I can’t recall ever having seen one before.

Perhaps stupidly, I’d set off with just my camera and a map for company. No bag, or coat, or other kit. To the north I’d seen the hills of the Lake District slowly disappear in a miasma. There’d been odd drops of rain in the air and I’d wondered about the sanity of continuing. But when I reached the summit of Caton Moor, which I’ve never visited before, it brightened up and I was even treated to a little weak sunshine. 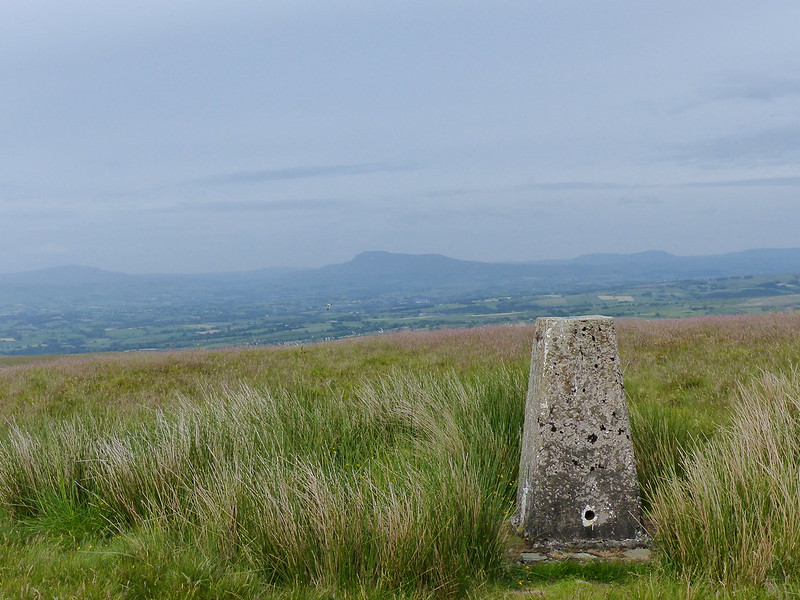 The Three Peaks from Caton Moor. 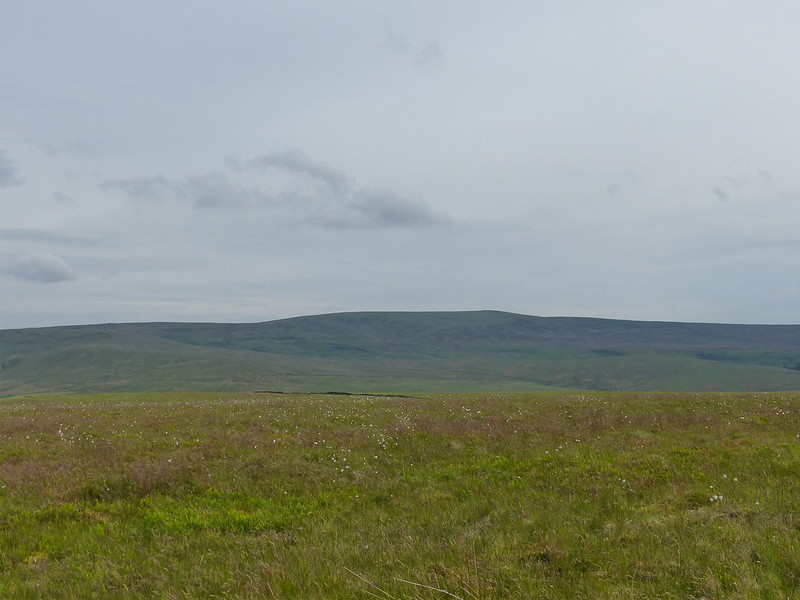 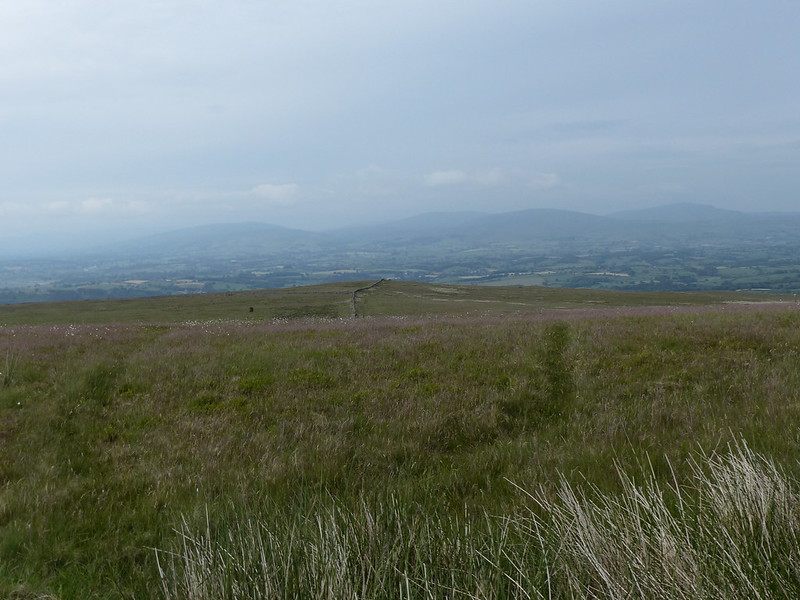 There were clear paths heading off towards Littledale and Roeburndale, which would be the two other possible walks I could envisage on Caton Moor. I was particularly taken with the path towards Roeburndale. Another time. 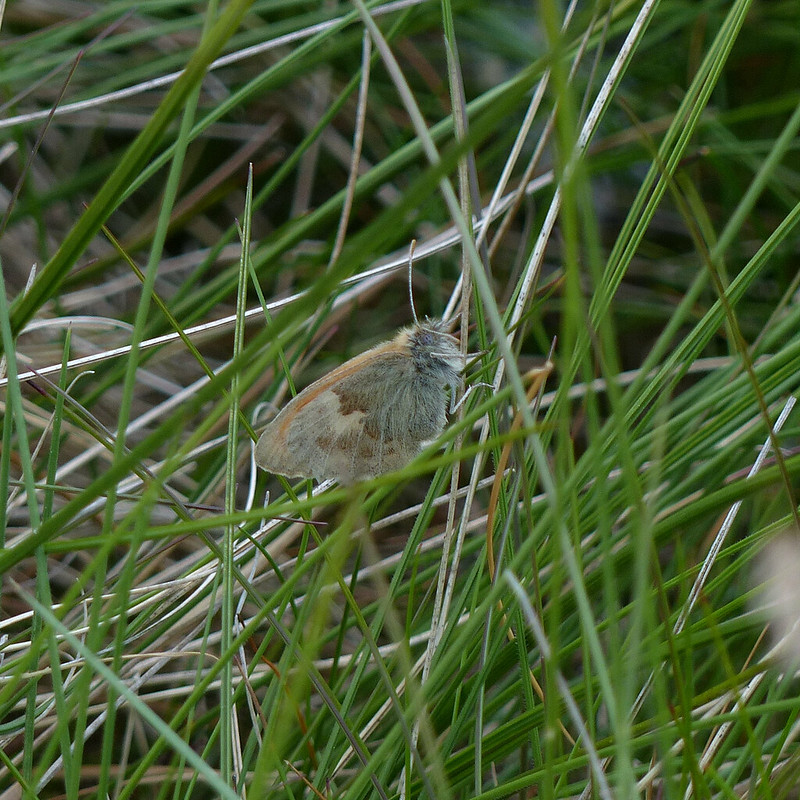 I saw loads of these on my evening walks last summer, so I was pleased to finally see one this year. 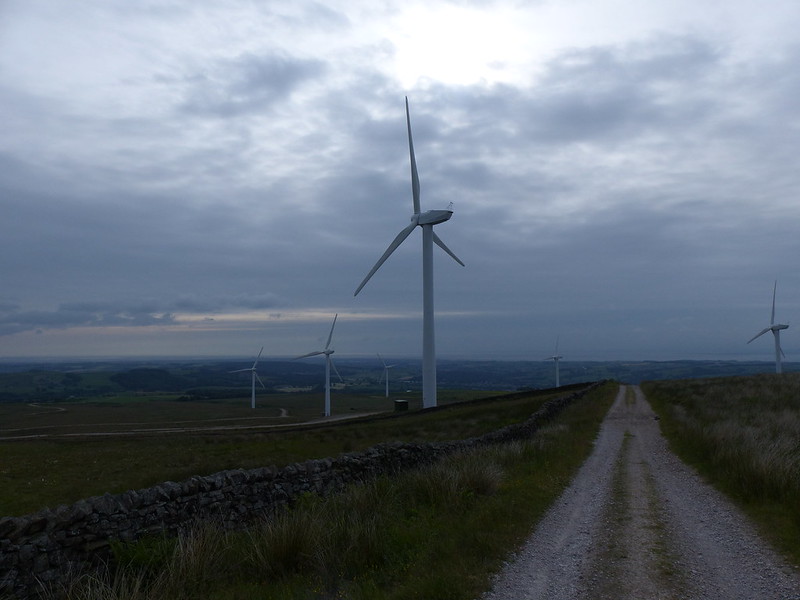 Walking back past the wind-farm I kept seeing a pair of Painted Lady butterflies. I couldn’t understand how I kept losing them and then seeing them as they flew up apparently from almost under my feet. Then I spotted one with its wings closed… 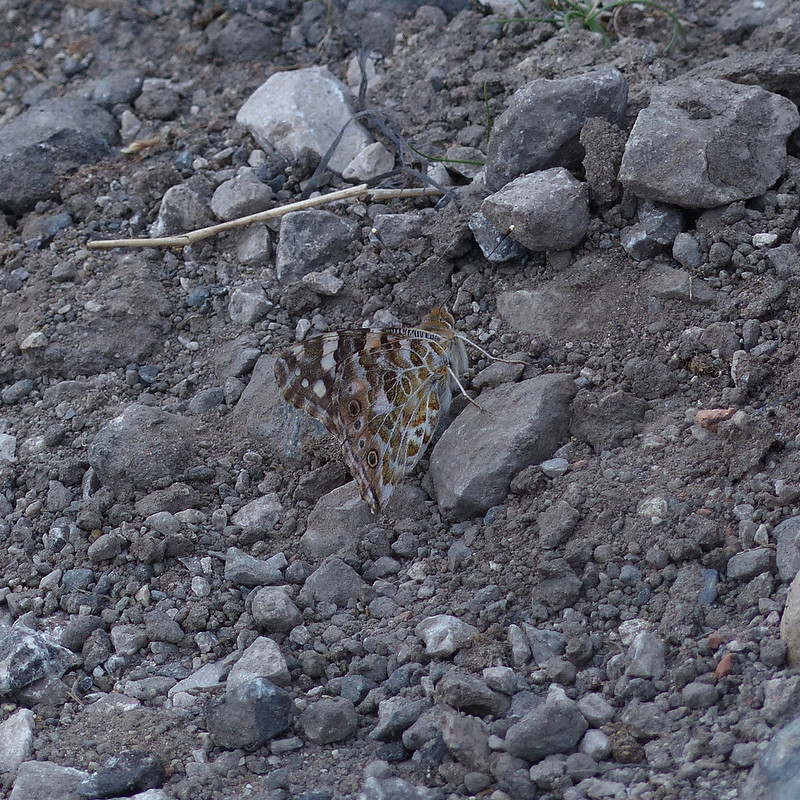 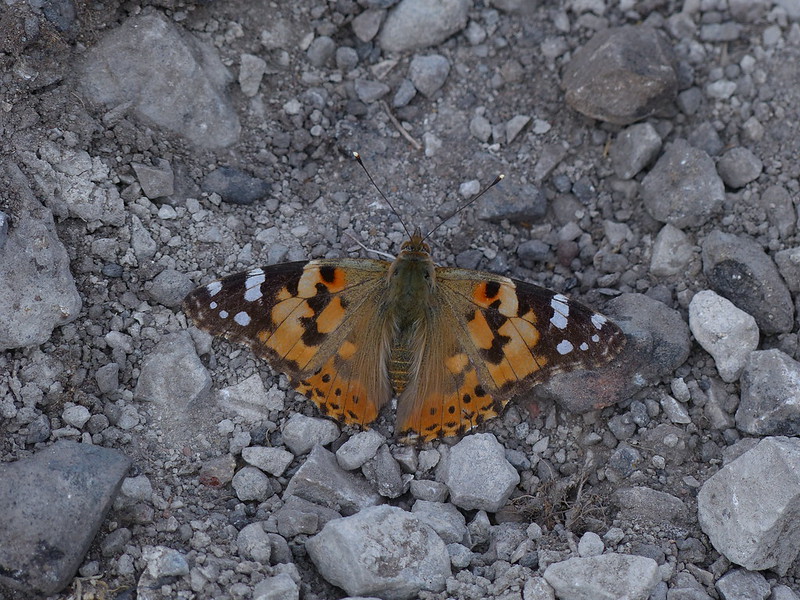 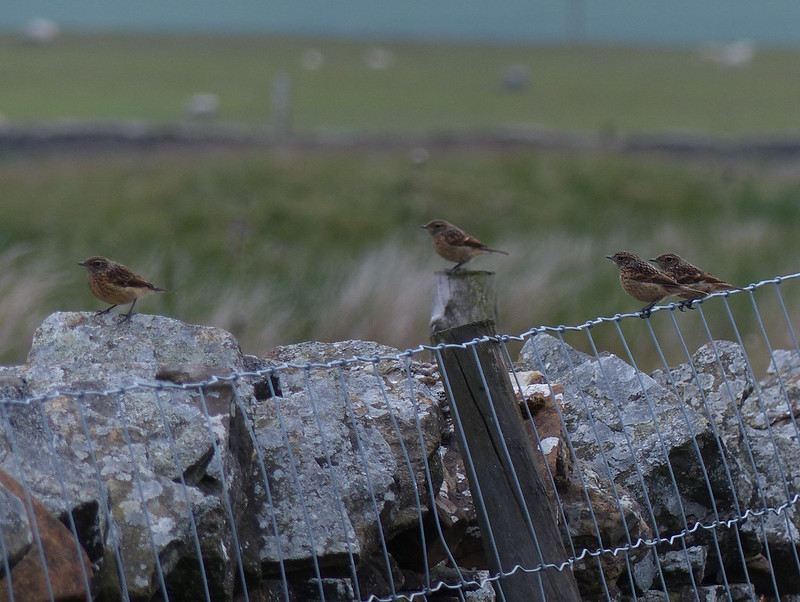 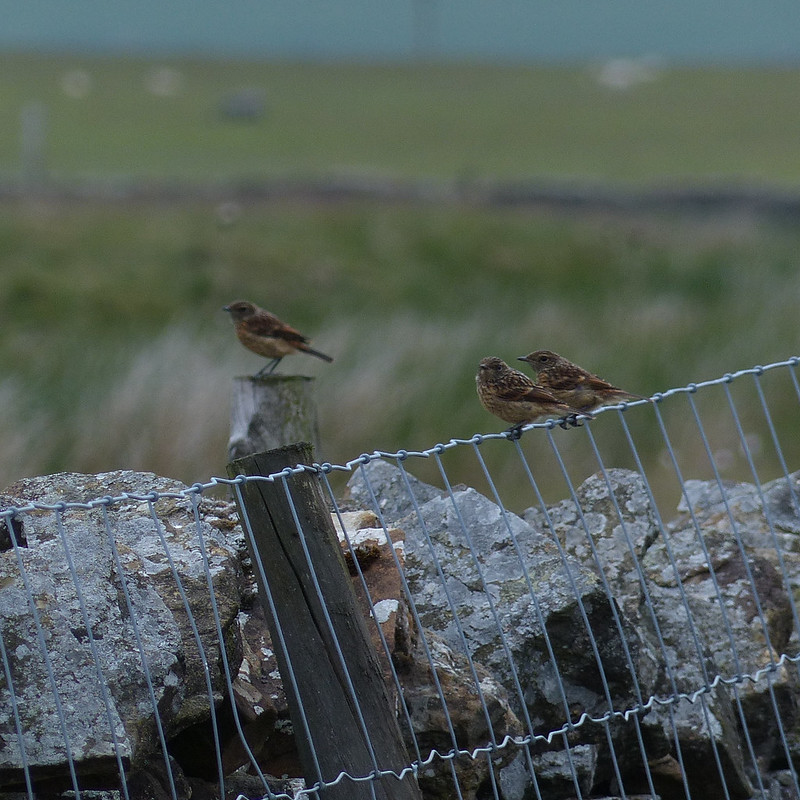 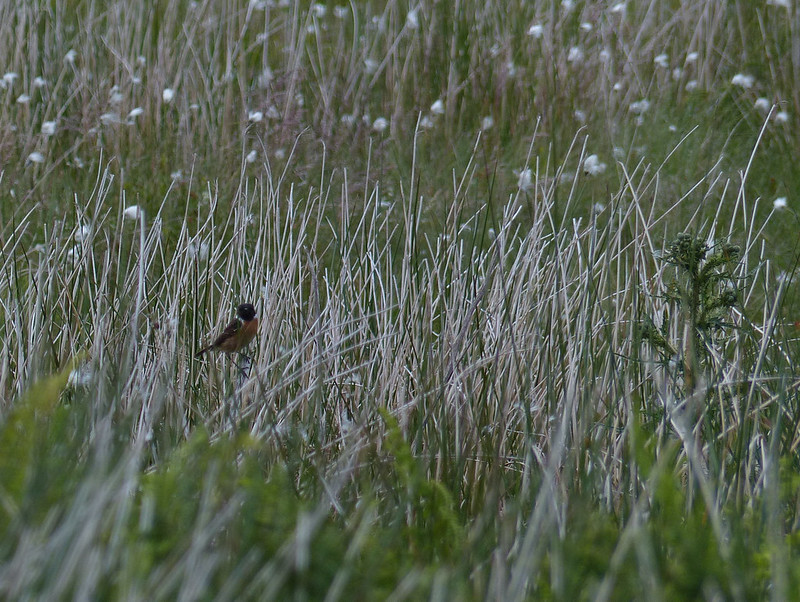 …though he soon flew off.

A lovely outing and the rain held off until I was safely ensconced in my car. By the time I got home it was raining hard and when I dropped B off it was pelting down. The wind also eventually arrived, if anything even worse than forecast. There was a lot of debris on the roads the following morning and we drove past the end of a lane which was blocked by a fallen tree.

A Walk from Claughton

8 thoughts on “A Walk from Claughton”