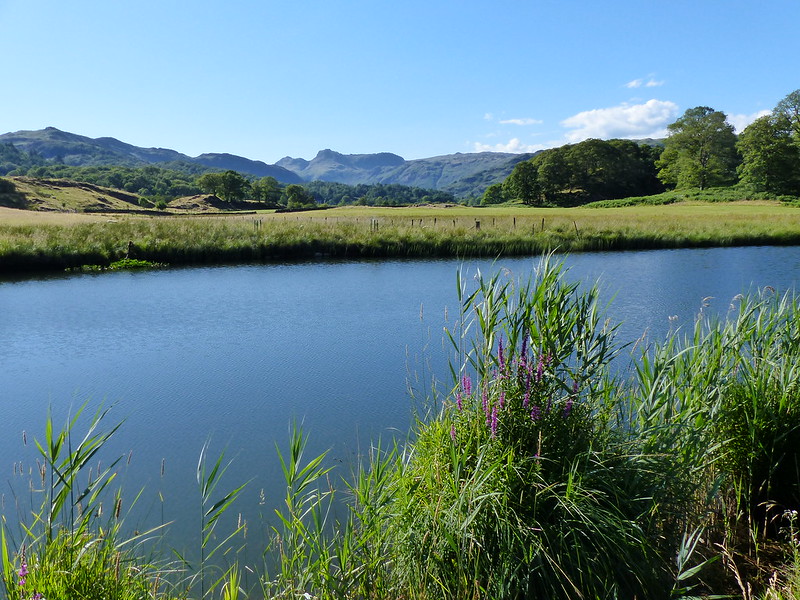 Continuing the theme of my last post – novelty versus familiarity – this is a route I’ve walked countless times over the years, but this iteration was unlike any previous version. It was late afternoon, after work, but still very hot. Skelwith Force was a bit of a misnomer for the normally thunderous waterfall, now relatively tame. I was heading for this large pool in the River Brathay. 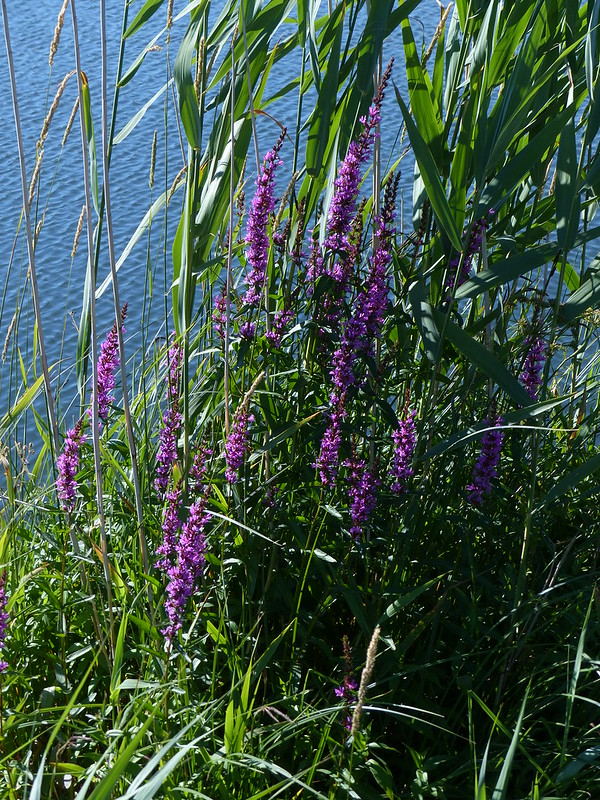 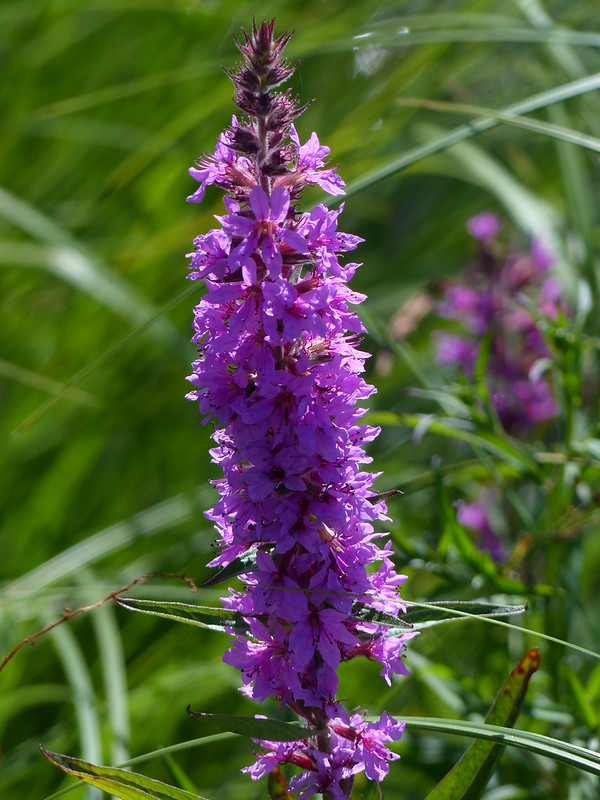 Purple Loosestrife – Emily – is this what’s in your garden? 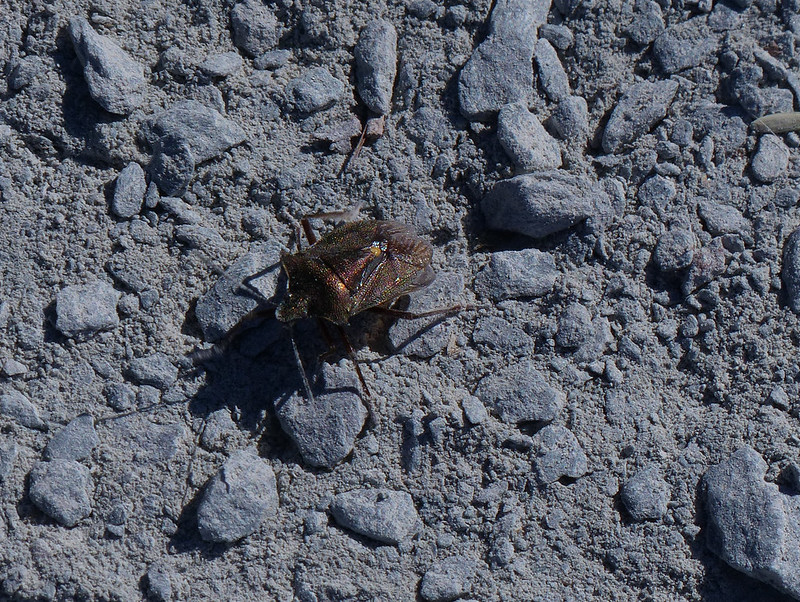 Before I got to this point in the river, I was examining another clump of Purple Loosestrife when this Shield Bug landed on my hand and then on the path. I think it’s a Bronze Shieldbug, but I’m not entirely confident. 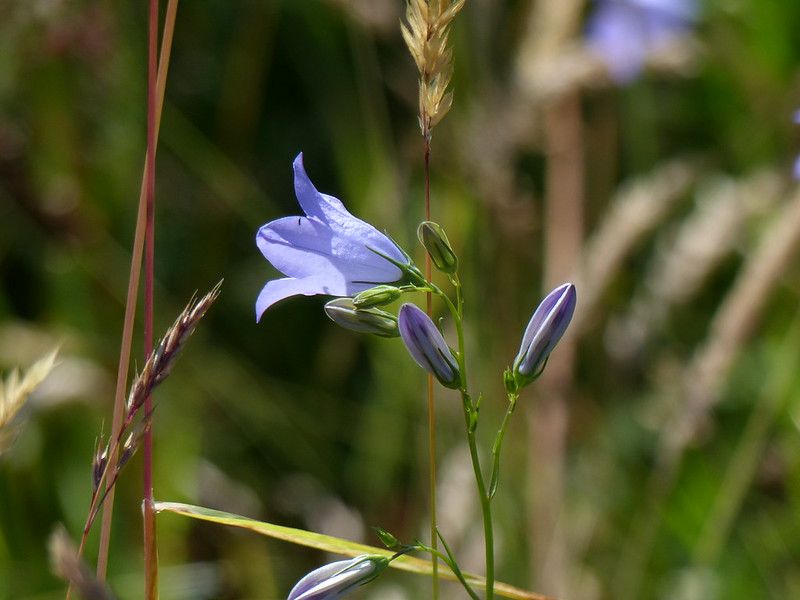 Anyway, the reason I’d strayed slightly from the path and stuck to the riverbank, was that I was looking for a place for a swim. This looked perfect… 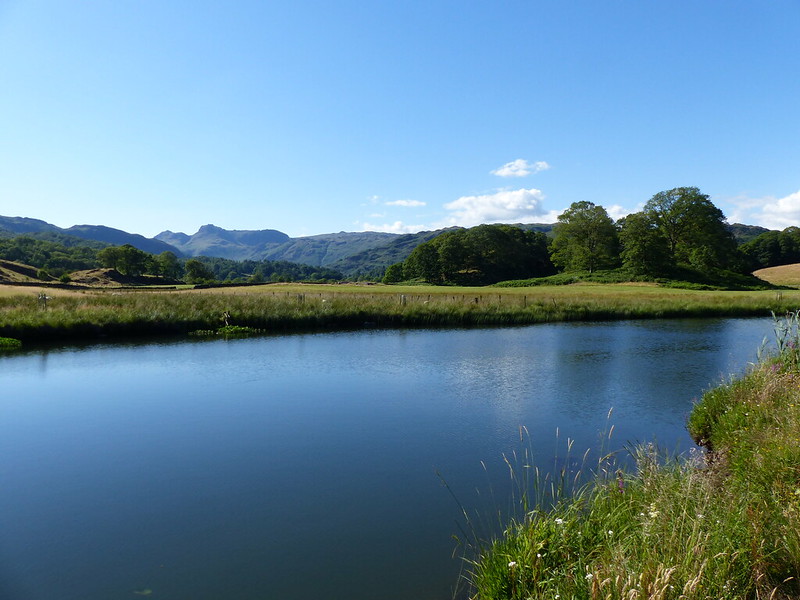 And it was! The water was deep and quite warm, but cool enough to be refreshing. It was almost immediately deep, straight from the bank, but I found a place where I thought I could ease myself in, except that the riverbed was so slippery that I lost my footing, both feet sliding out from under me, and fell in anyway. It was a beautiful spot for a swim, with stunning views and a host of damselflies and dragonflies keeping me company.

A short walk upstream, past what looked like another ideal place for swimming, brought me to Elter Water… 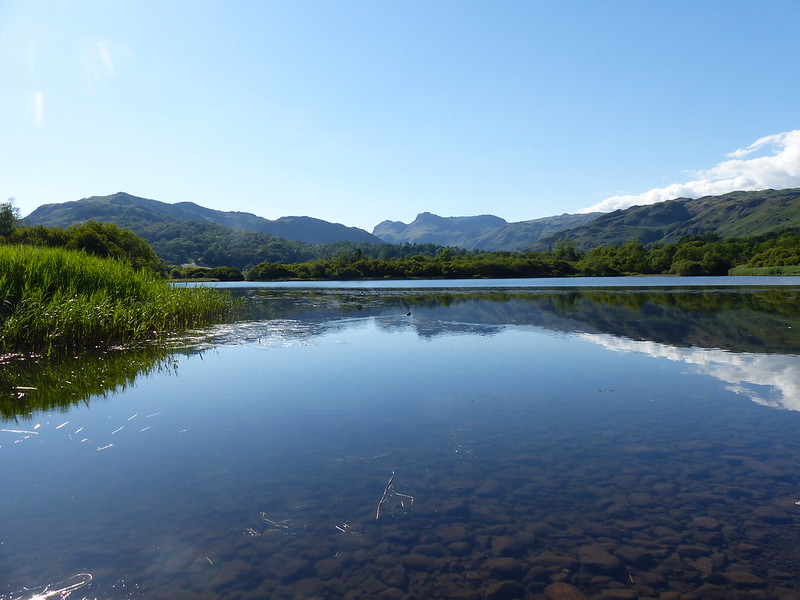 The lake, not the village. I’d had an idea that I might swim here too, but, as you can see, the water was very shallow close in and further out I thought I could see a great deal of weed, which I found a bit off-putting; I decided to bide my time.

If I wasn’t swimming, there were plenty of fish that were… 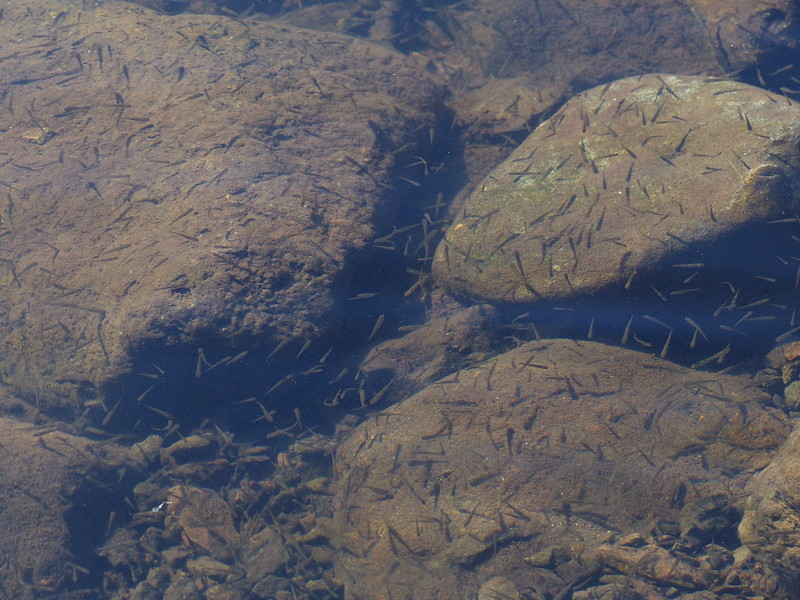 I still had my wet-shoes on and paddled into the water to take some photos. The fish weren’t very frightened of me… 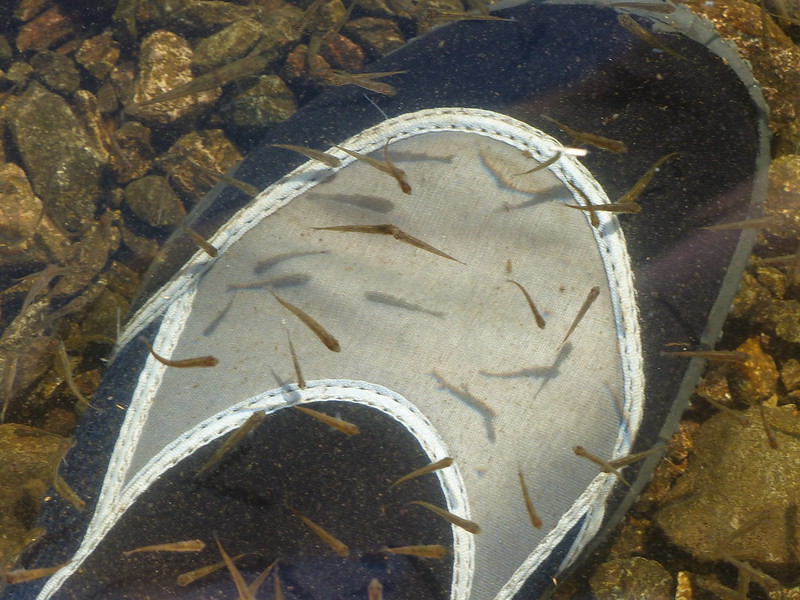 I changed back into shoes more suited for walking, but retained my rapidly drying trunks; I had plans for more swimming.

In fact, before I’d left for this part of the Lakes, I’d been poring over the map, looking at blue bits which promised the possibility of a swim. As is often the case, I’d got carried away and had identified numerous potential spots and was toying with the idea of linking them together in an extended walking and swimming journey reminiscent of the central character’s trip in the film and John Cheever short-story ‘The Swimmer’, with your’s truly in the muscular Burt Lancaster role, obviously. 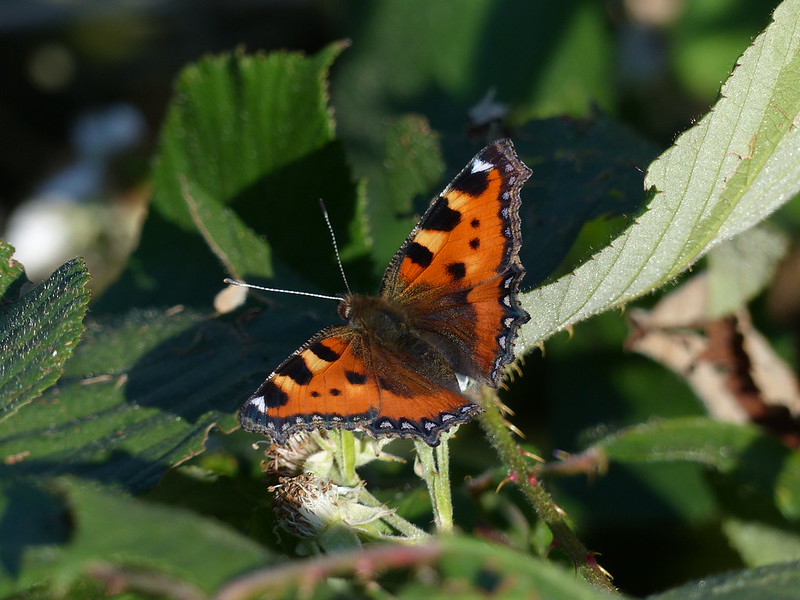 Small Tortoiseshell butterflies. I saw, and photographed, loads of them. 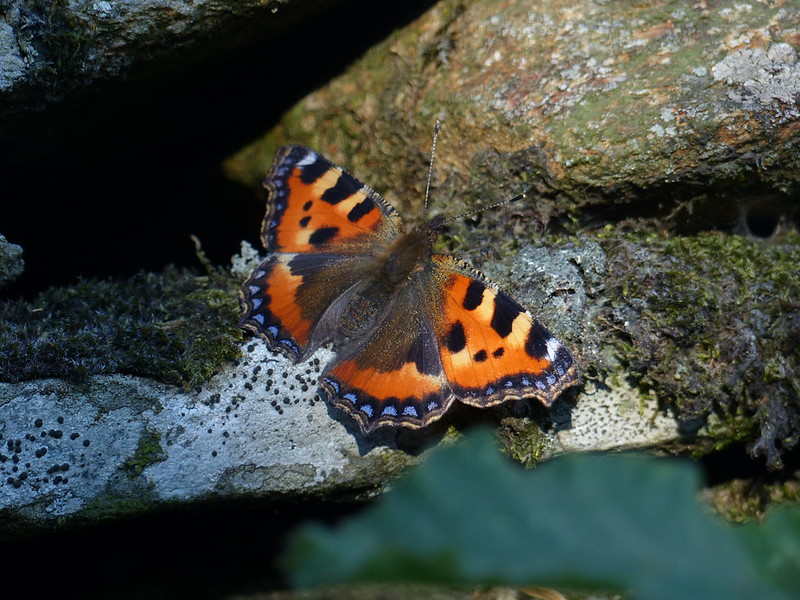 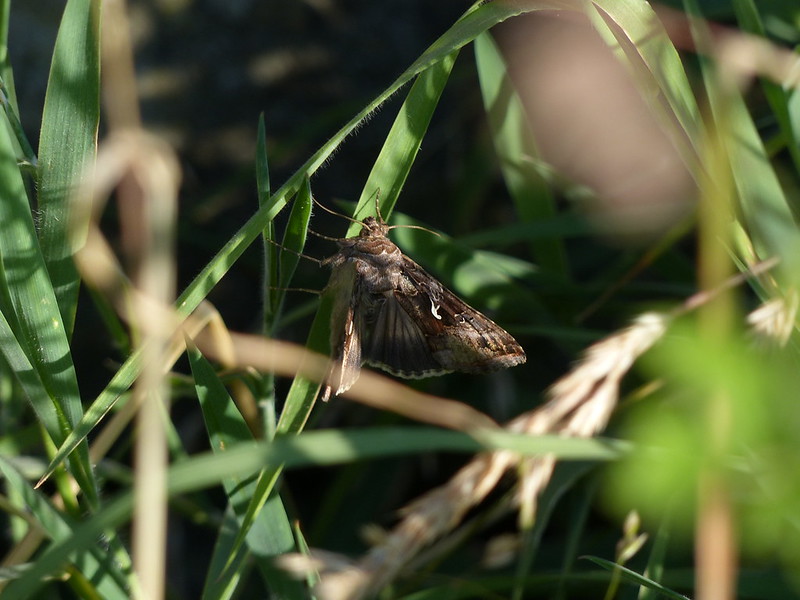 Silver-Y Moth. I saw lots of these too, but they were very elusive to photograph. 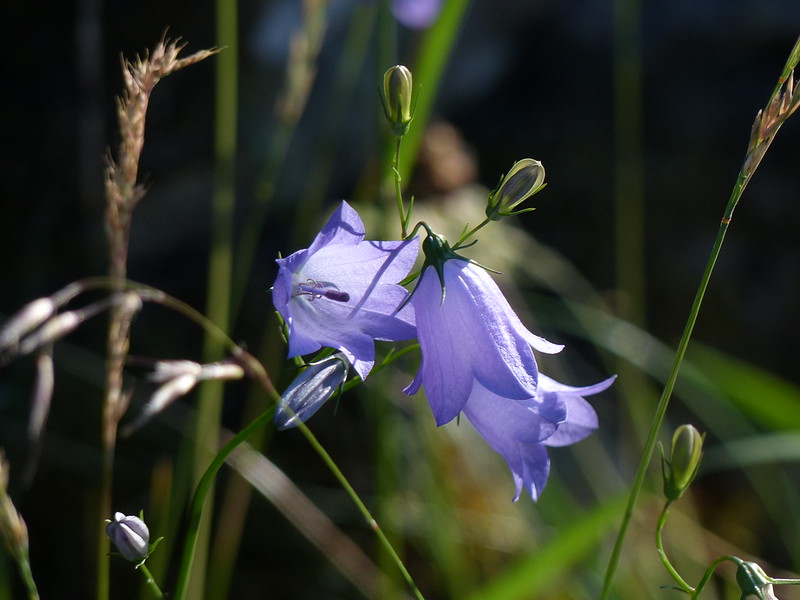 Lots of Harebells too!

The short climb from the village of Elterwater over to Little Langdale was hot and sticky work, but brought the reward of views of Little Langdale Tarn and the Coniston Fells… 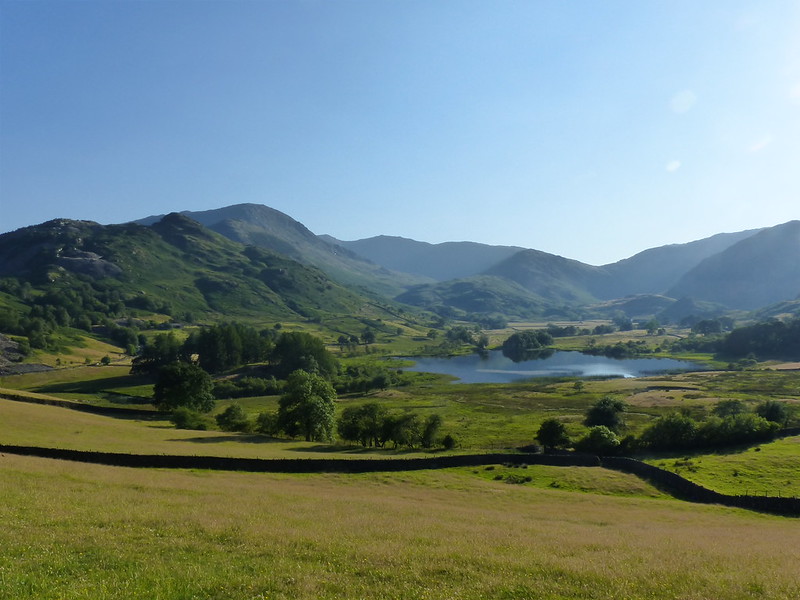 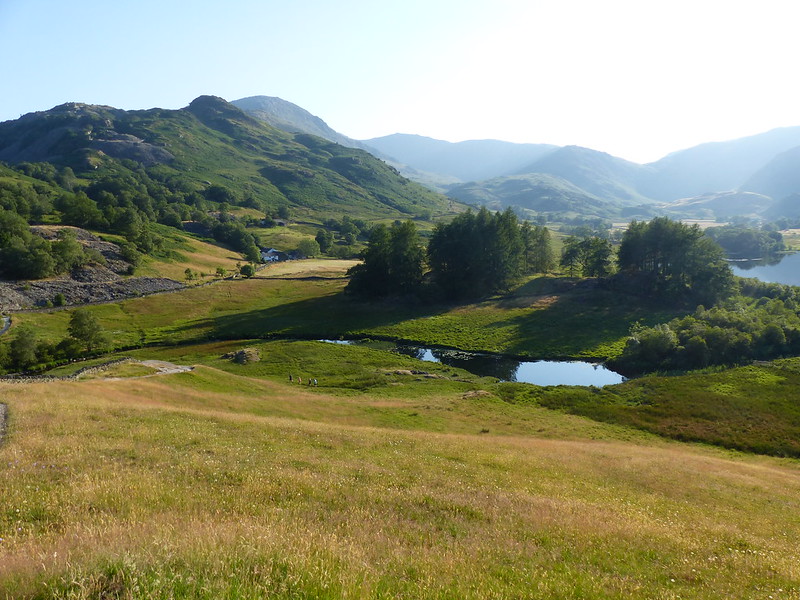 …is the River Brathay again, flowing out of Little Langdale Tarn. 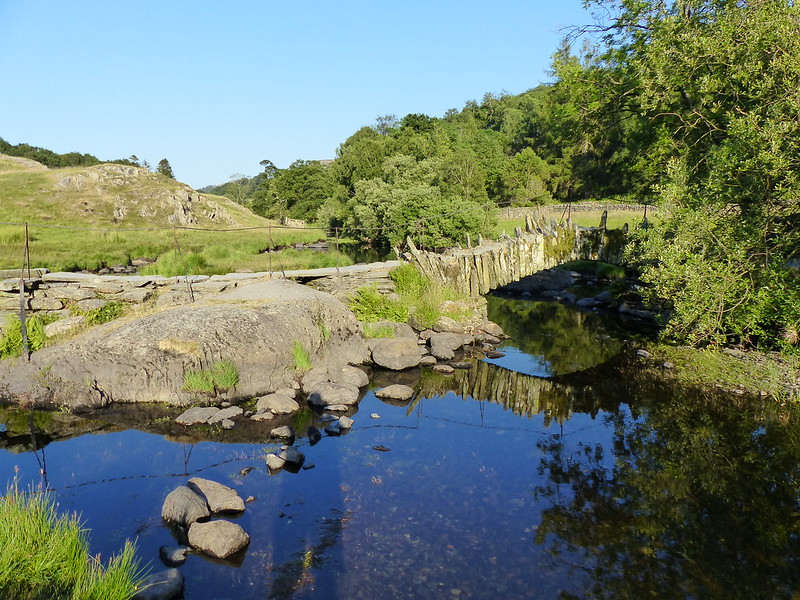 I thought that this pool… 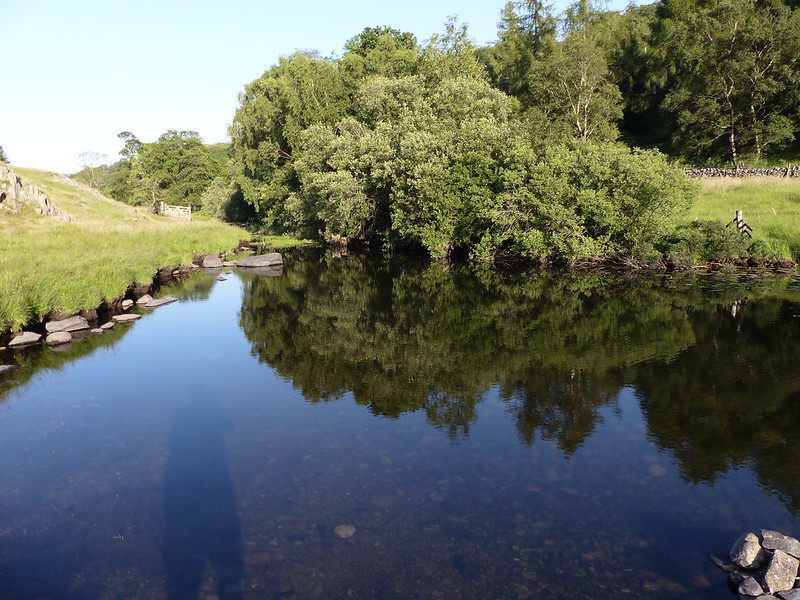 …just downstream of Slater Bridge, might have swimming potential, but couldn’t be sure that it was deep enough, so wanted to check the pool I’d seen before, back toward Little Langdale Tarn.

The ground beside the river, even after our long dry spell, was still quite spongy and full of typical wet, heathland vegetation, including lots of Heath Spotted-orchids. 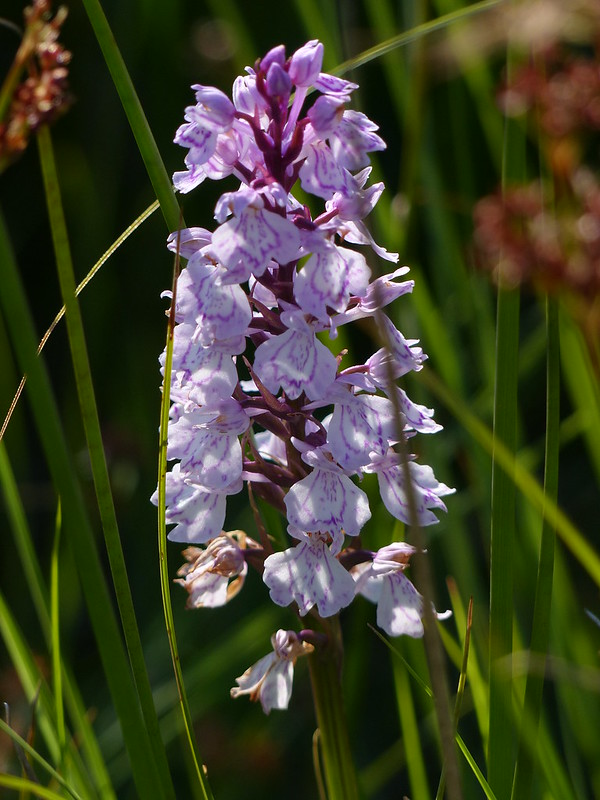 Good to have an opportunity to compare these with its close relative Common Spotted-orchid which I’ve photographed around home recently. 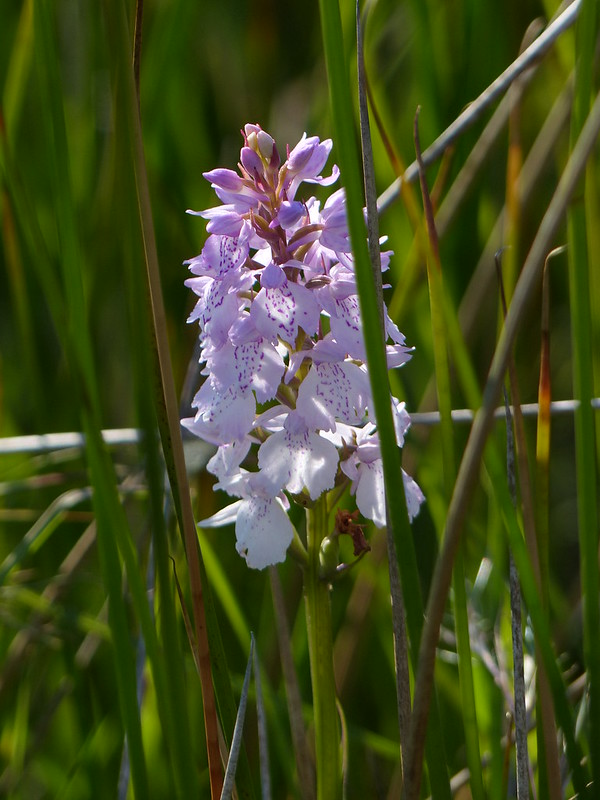 This pool turned out to be ideal again. I dug my stove out of my bag, to make a cup of tea ready for when I’d had a swim. Whilst I was busy, a dragonfly landed on a nearby boulder. I grabbed my camera, but the photograph came out horribly blurred.  It does show a dragonfly which is exactly the same pale blue as a male Broad-bodied Chaser, but with a much narrower abdomen, making it either a male Black-tailed Skimmer or a male Keeled Skimmer, probably the latter, based on the distribution maps in my Field Guide, which makes it a first for me. 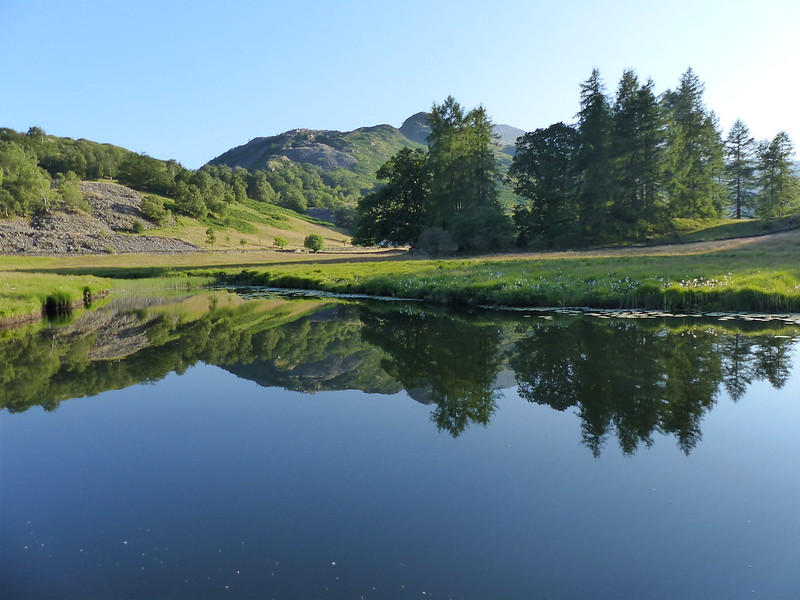 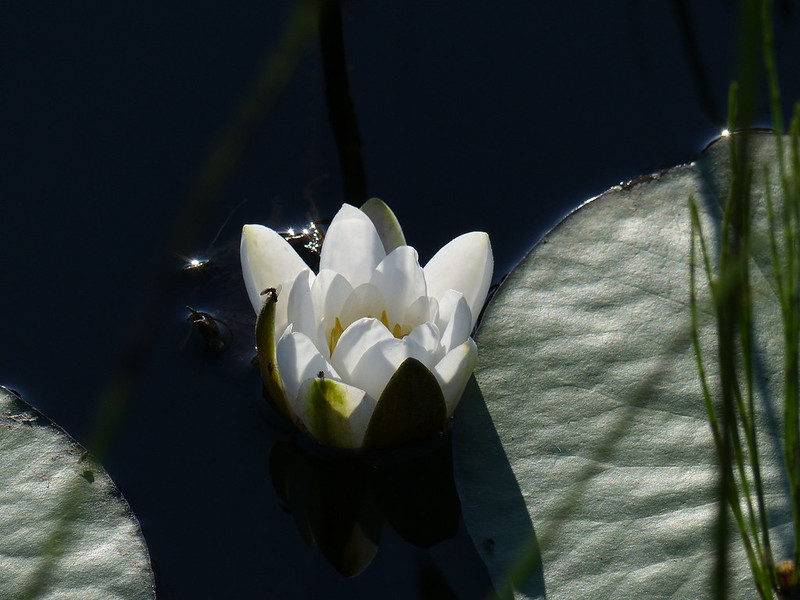 White Water-lily – the largest flower indigenous to Britain, but it closes and slowly withdraws into the water each day after midday. 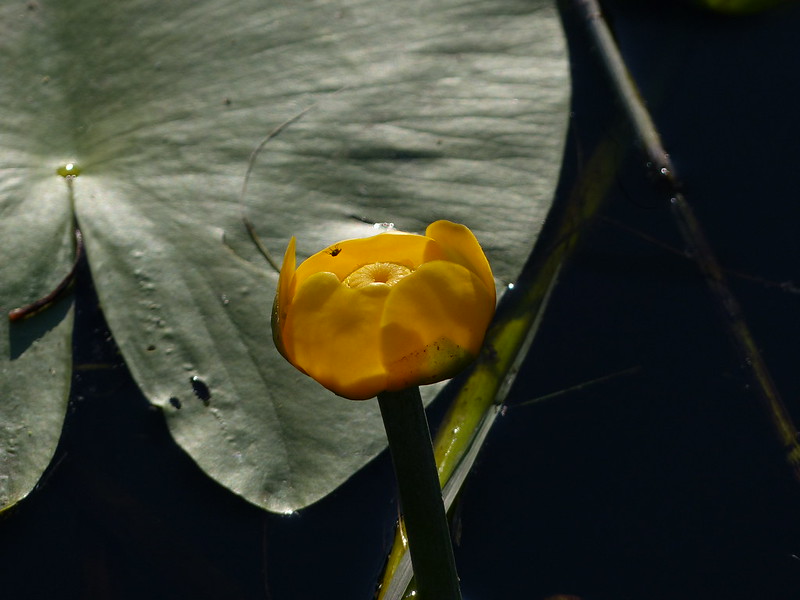 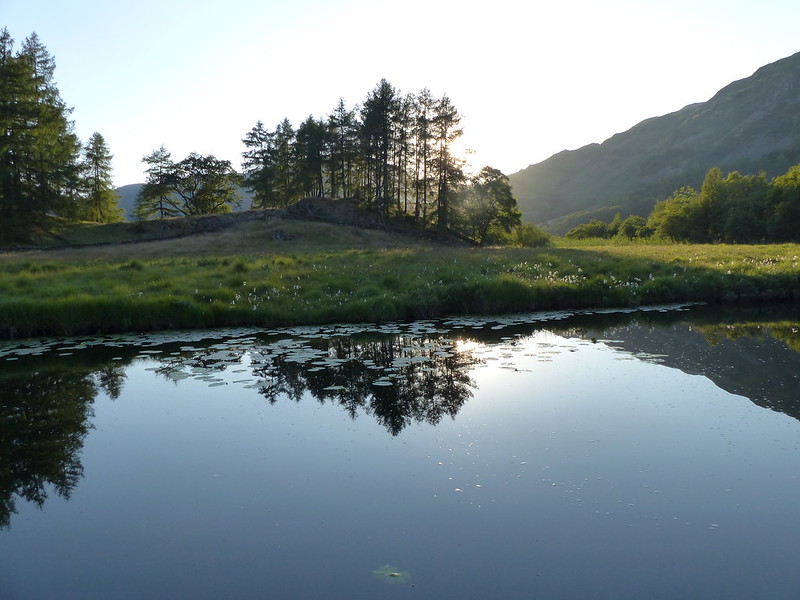 Once again, the water was deep right to the bank, but somebody had piled up rocks under the water to make it easier to get in and out. The water here was colder than it had been further downstream, quite bracing even, somewhat to my surprise. I enjoyed this swim even more than the first. The low sun was catching the Bog Cotton on the bank… 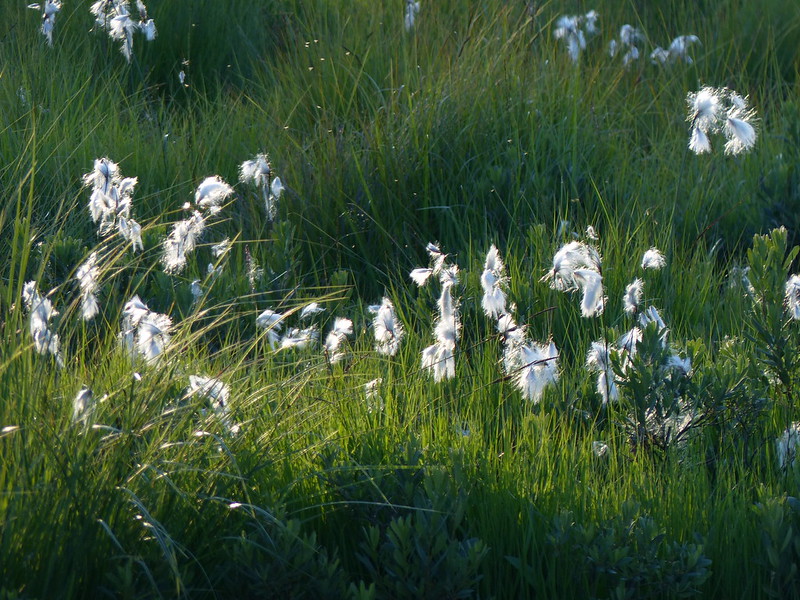 …and was also making reflected ripple patterns on the peaty exposed bank, which were stunning, but which I can’t show you because they were only visible from the water. In addition, the Bog Myrtle bushes growing along the bank were giving off a lovely earthy, musky fragrance.

It was eight o’clock by now, and I expected to have the river to myself, but a couple arrived for a swim and once they were changed and in the water, I got out to enjoy my cup of tea. 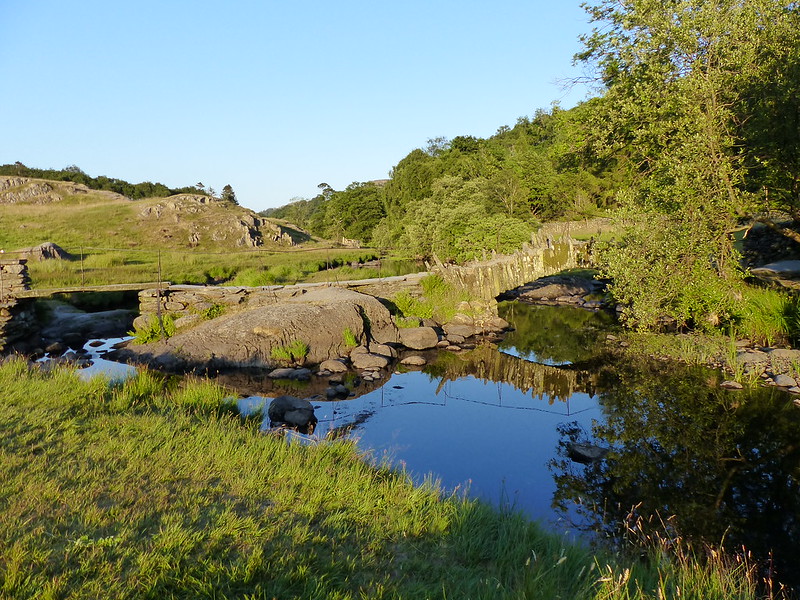 I watched two large dragonflies rapidly touring the area. They were so fast that my efforts to take photographs were doomed to failure. I thought that they were Golden-ringed Dragonflies, like the ones I saw mating near to Fox’s Pulpit last summer. At one point, one of them repeatedly landed momentarily on the surface of the water, or rather splashed onto the surface, making a ripple, and then instantly flew on again, only to almost immediately repeat the procedure. I have no idea what purpose this behaviour served. It was very odd. 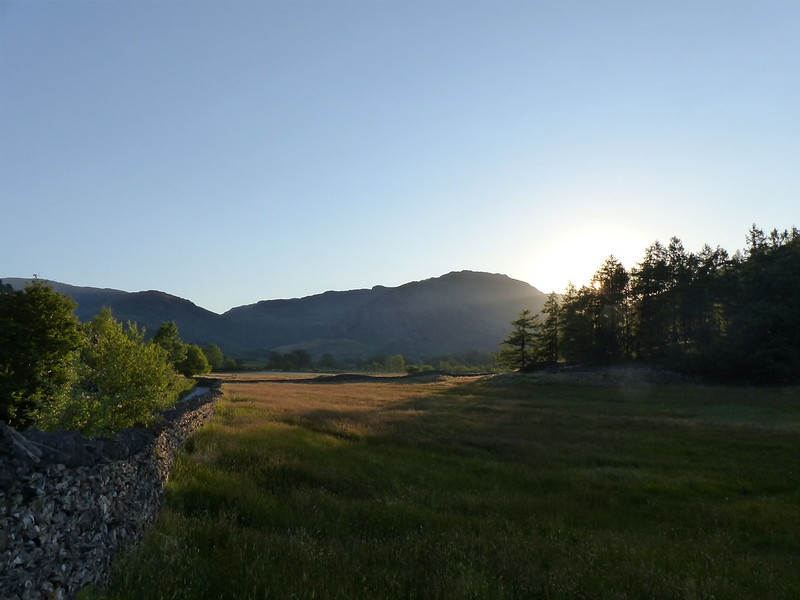 I still had a fair way to go to get back to the car, but also the last of the light to enjoy whilst I walked it. 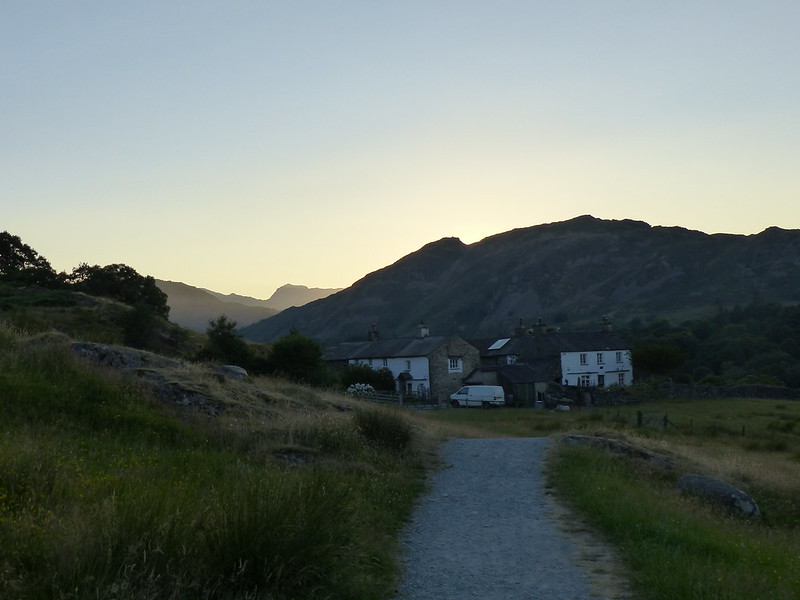 The post’s title is meant to be a punning reference to ‘At Swim Two Birds’, Flann O’Brien’s wonderfully nutty book, which some people claim is even better than his ‘The Third Policeman’. I probably should reread them both to see what I think now, after a break of a few years; if the house weren’t stuffed to the rafters with books I haven’t ever read, I would set about that task tomorrow. ‘At Swim Two Becks’ seemed appropriate when I thought I had swum in Great Langdale Beck and Greenburn Beck and before I had examined the map again and realised that in fact I’d swum in two different stretches of the River Brathay.

Of course, Heraclitus, whom I am fond of quoting, tells us that you can never step into the same river twice. You can, however, walk the same route twice, but it will never be the same each time. Previous blog-posts of much the same route, none of which involve swimming, Burt Lancaster, John Cheever or the novels of Flann O’Brien:

A walk with my Mum and Dad.

A walk with TBH.

A snowy walk with friends

18 thoughts on “At Swim Two Becks”