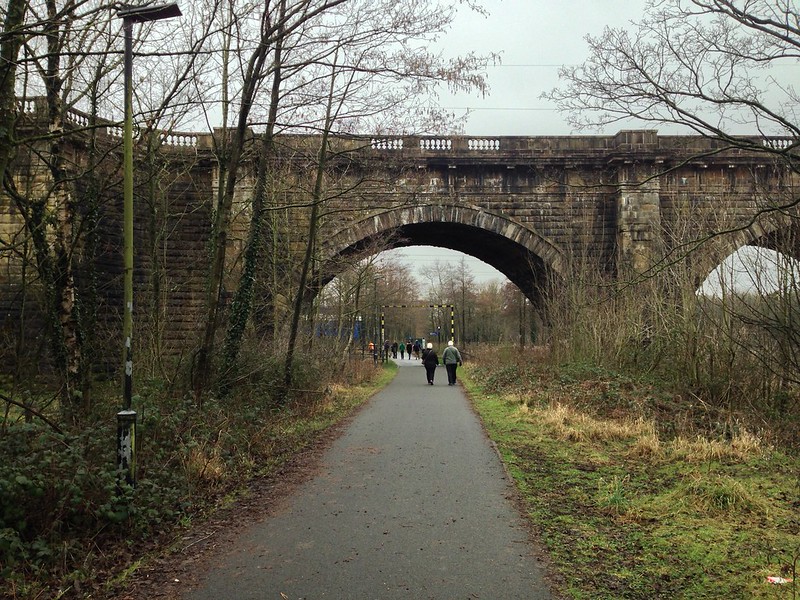 On the Thursday of our February half-term week, we were looking to combine another ‘easy’ walk, which allowed the possibility of shorter or longer alternatives, with a lunchtime meal. We hit upon driving to the park and ride carpark, just off the motorway by Lancaster, which has the advantage of being free, then walking into town. We could then either walk back or catch the dedicated bus service if need be.

From the carpark, after crossing a couple of busy roads, it’s easy to access the path beside the River Lune. That took us to John Rennie’s 1797 aqueduct, which carries the Lancaster Canal over the river. 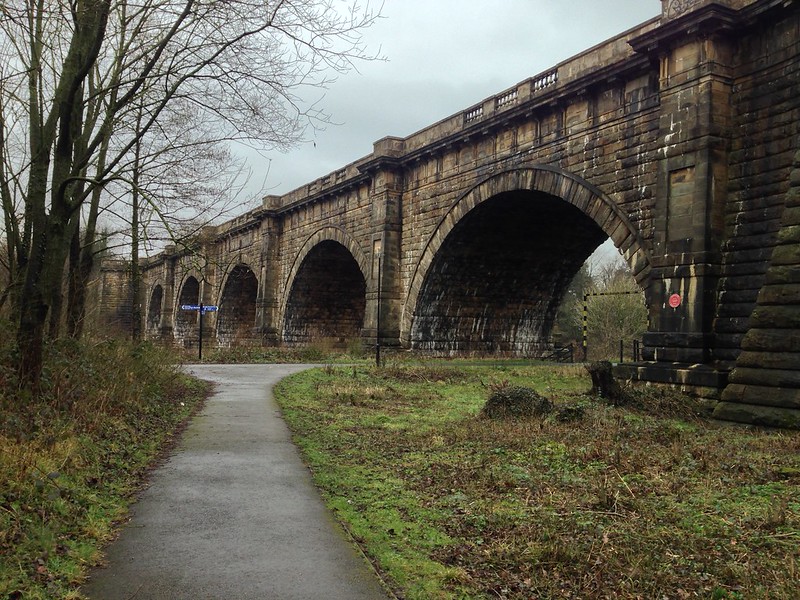 We climbed up to the canal and then followed that into Lancaster. 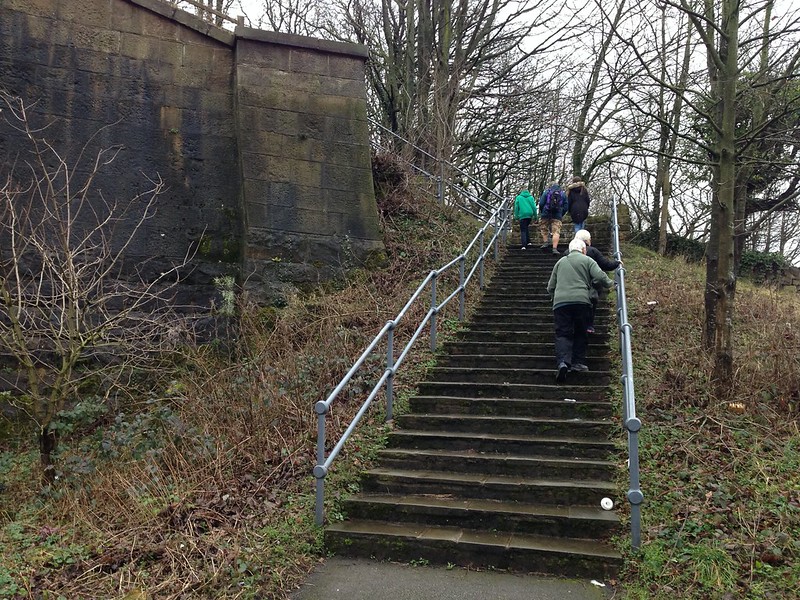 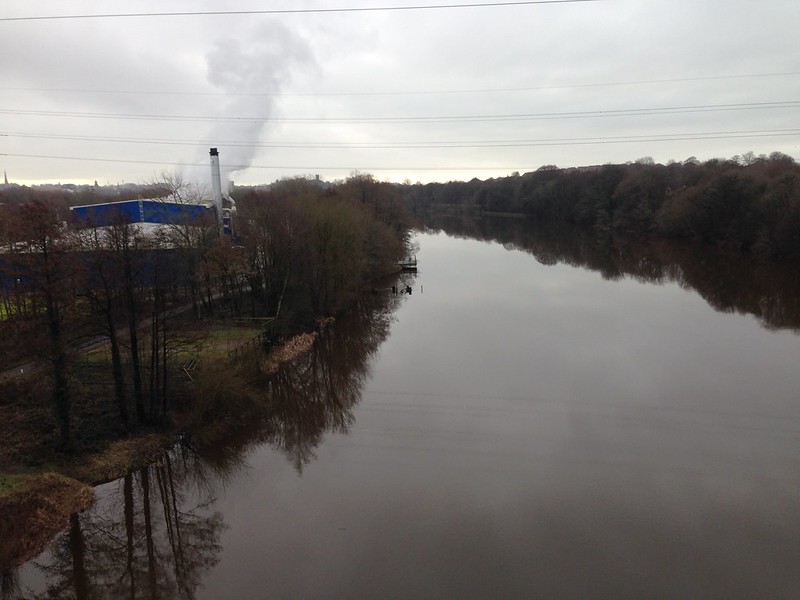 The River Lune and the (smelly) Carrs Billington plant.

We were heading for the Sun Hotel for lunch. The food was magnificent… 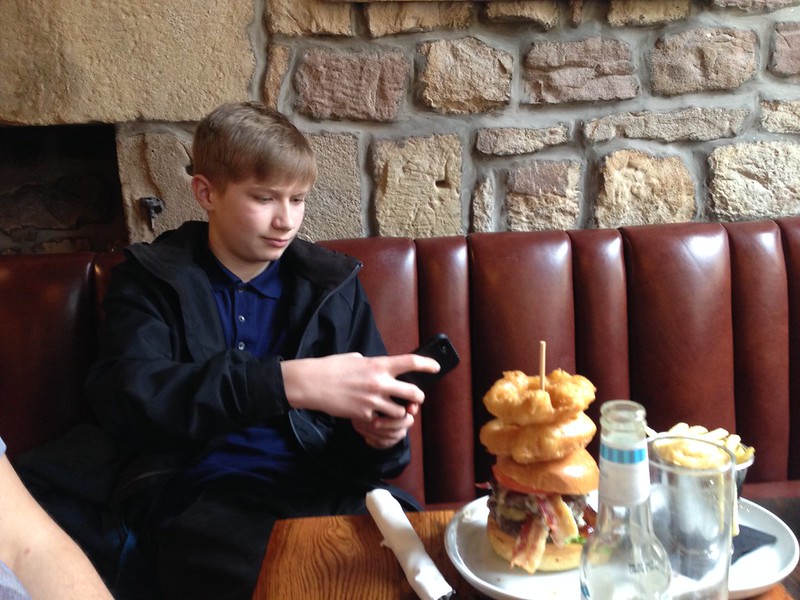 I’ve included this slightly blurred photo of B instagramming his choice, because I know at least one reader of the blog who appreciates a huge burger.

The vegans were happy too… 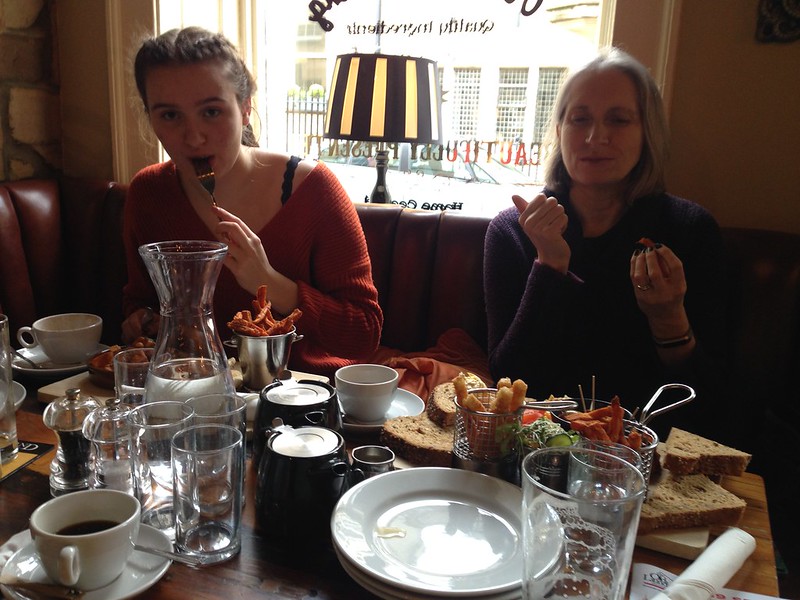 In fact, I think we all enjoyed our meals. 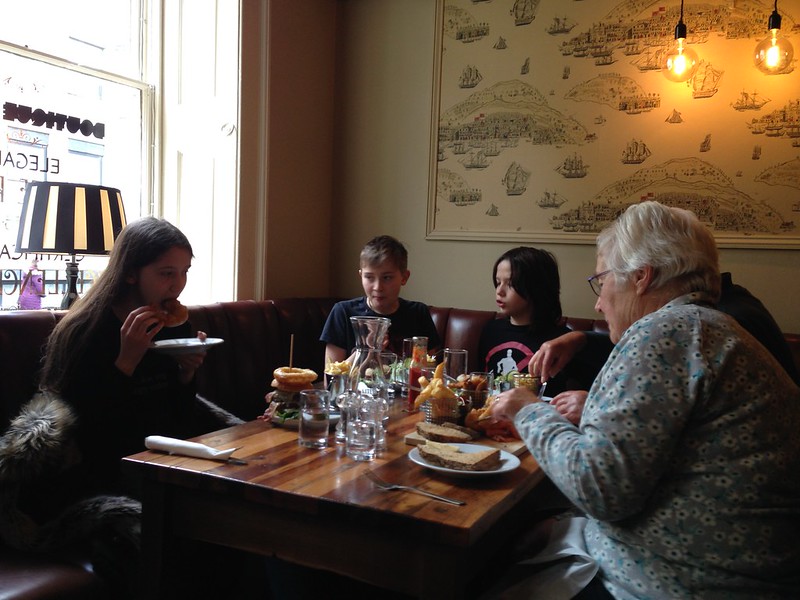 After that enormous repast, we decided that we were all fit enough to walk back to the car. This time we followed the Lune rather than the canal. 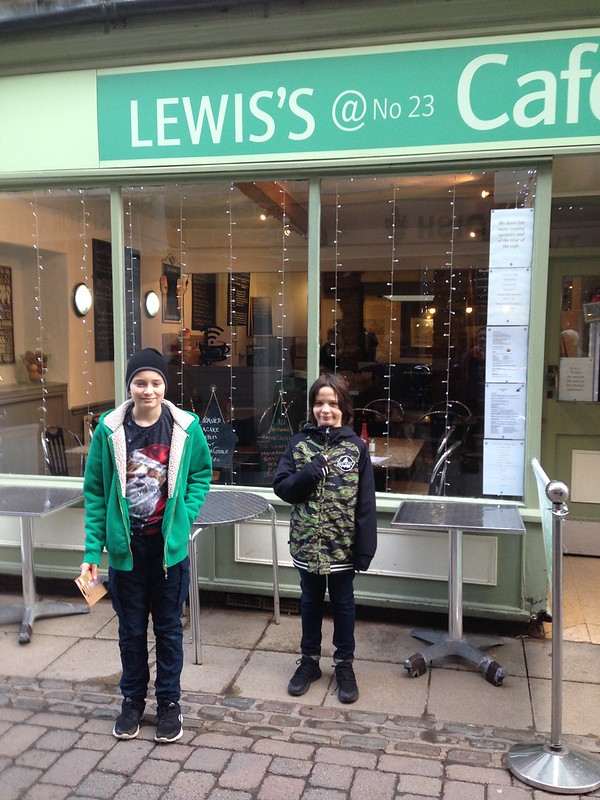 ‘Little’ S and my nephew L. The latter wanted to pose in front of this cafe for some reason?

The dull cloud of the morning had cleared, so we had terrific views of the aqueduct reflected in the placid waters of the Lune to accompany our walk. 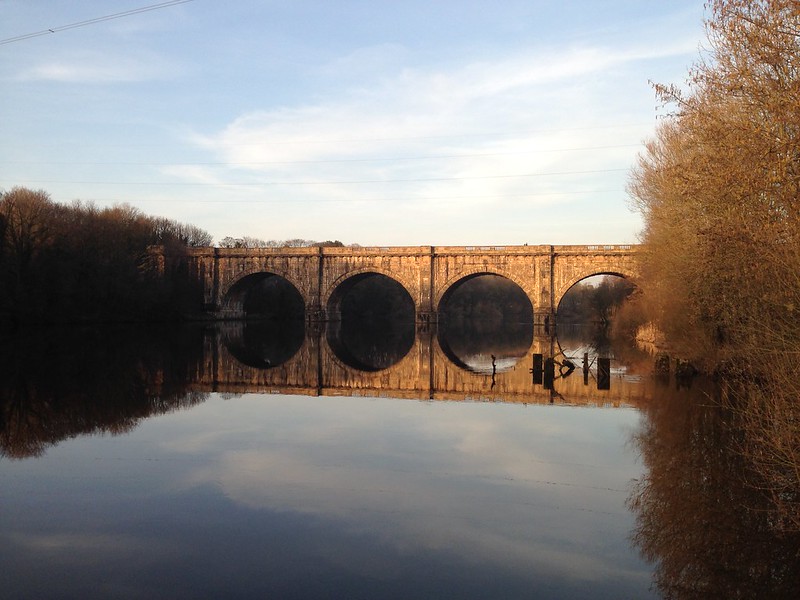 On the way home, as we drove along Storrs Lane by Leighton Moss, I thought I saw a Starling murmuration, so we stopped to take a look. This is definitely a winter phenomenon and even in mid-February I suspect that there were perhaps less birds than we had seen earlier in the year, when we often saw people parked to watch the Starlings as we drove home from Lancaster in the late afternoons. 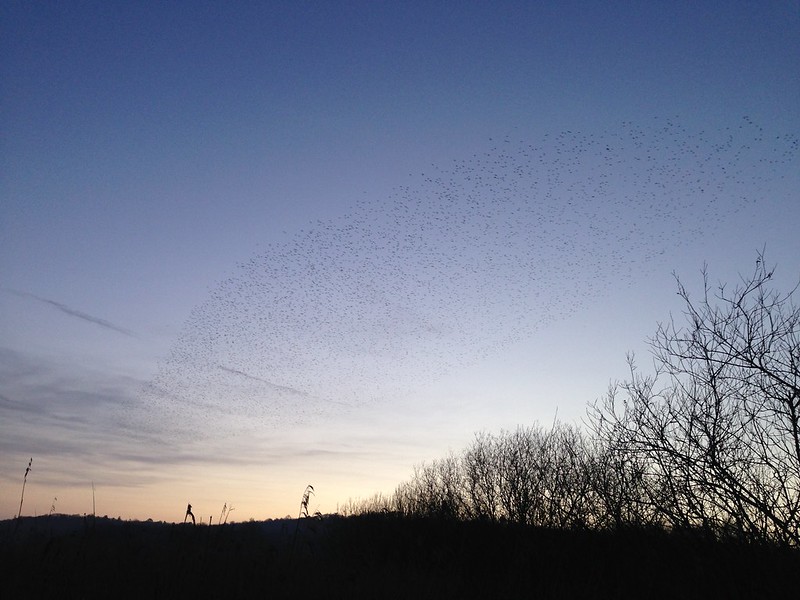 The advantage we did have though was clear skies and good light. 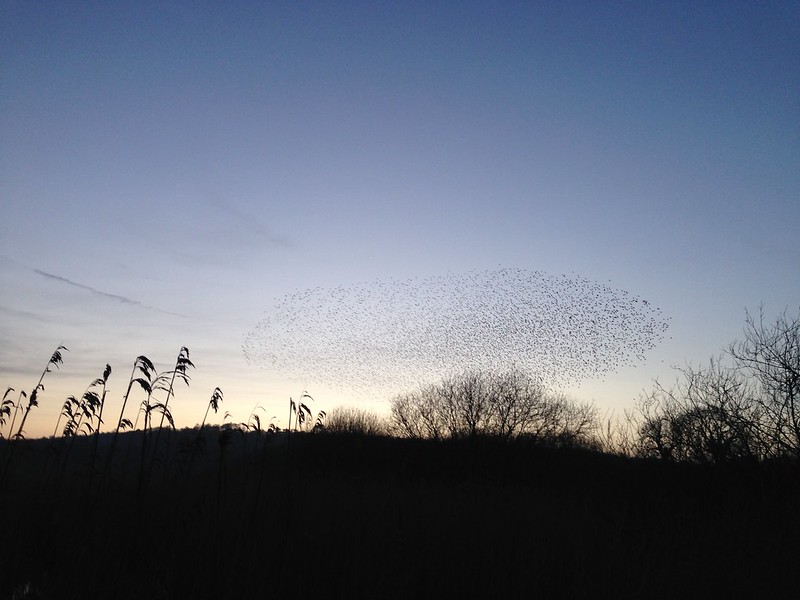 Still photos really don’t do this justice: the way the cloud of birds wheels together and pulses and fluidly changes shape. 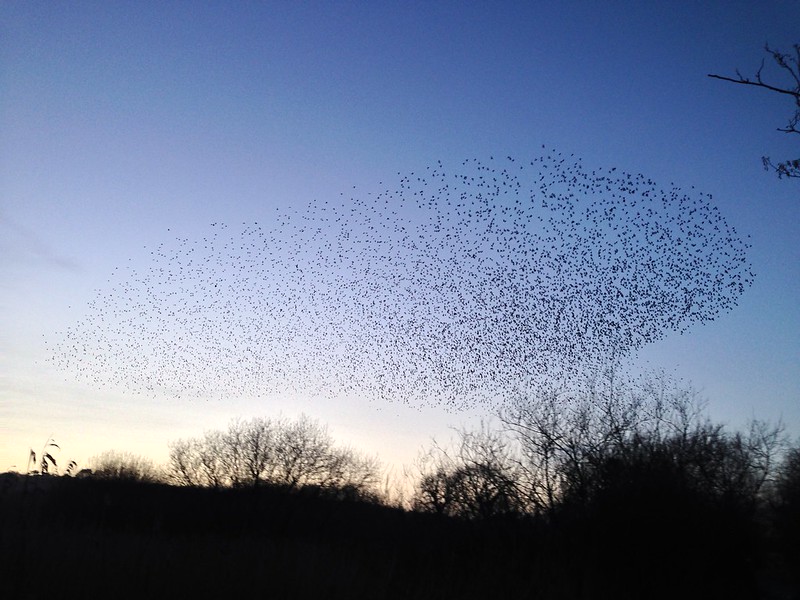 It was an unexpected bonus at the end of a very enjoyable day. 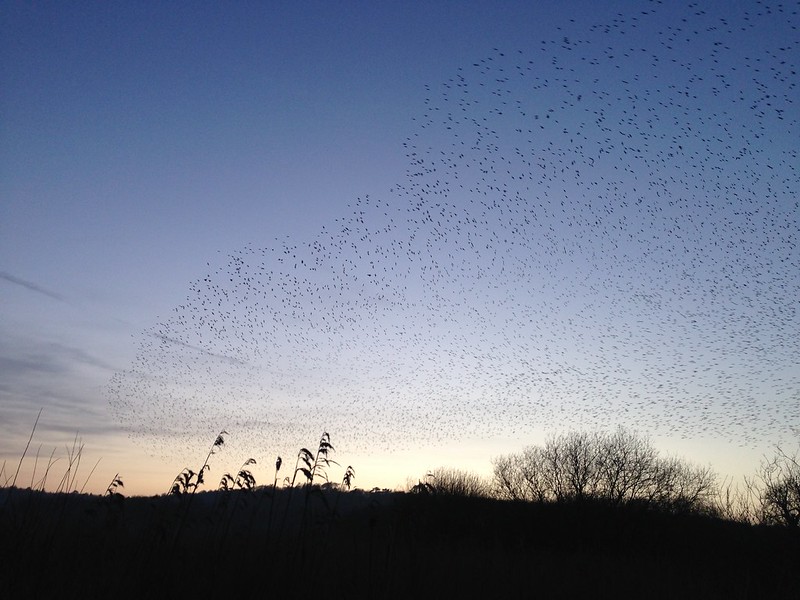