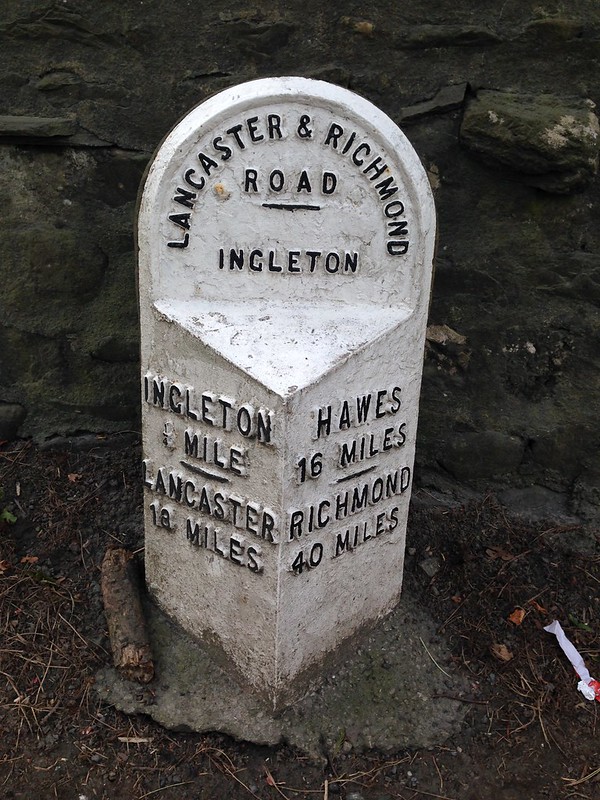 A long walk, by my standards at least. I wanted to test my fitness and how my preparation for the 10 in 10 challenge was coming along. The forecast wasn’t great, but the weather for the Dales looked like a much better bet than than the Lakes – hence my choice of route.

I didn’t descend from Whernside in a perfectly straight line, as this map suggests. The battery on my phone ran down and the app has simply connected the final point at which I checked my distance travelled with the point at which I was able to recharge my phone, which was when I got back to the car. I now realise that my phone was constantly searching for a signal (I didn’t have one all day) and that was why the battery drained so quickly. Apparently, aeroplane mode is the way to go. (Andy subsequently explained this to me – he knows about new-fangled gadgets and stuff like phone batteries).

Anyway, mapmywalk gives this approximate route as roughly 20 miles and 3500′ of ascent. I suspect the actual figures are slightly higher, but probably not much. 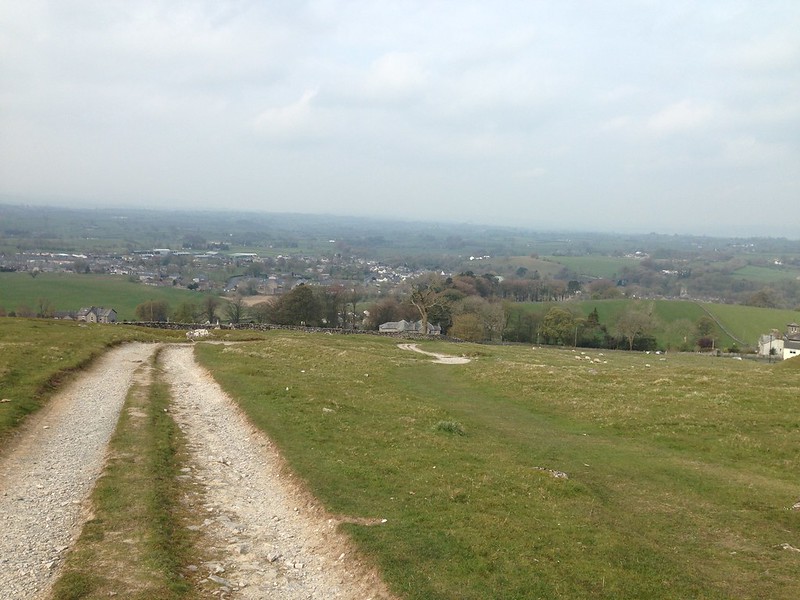 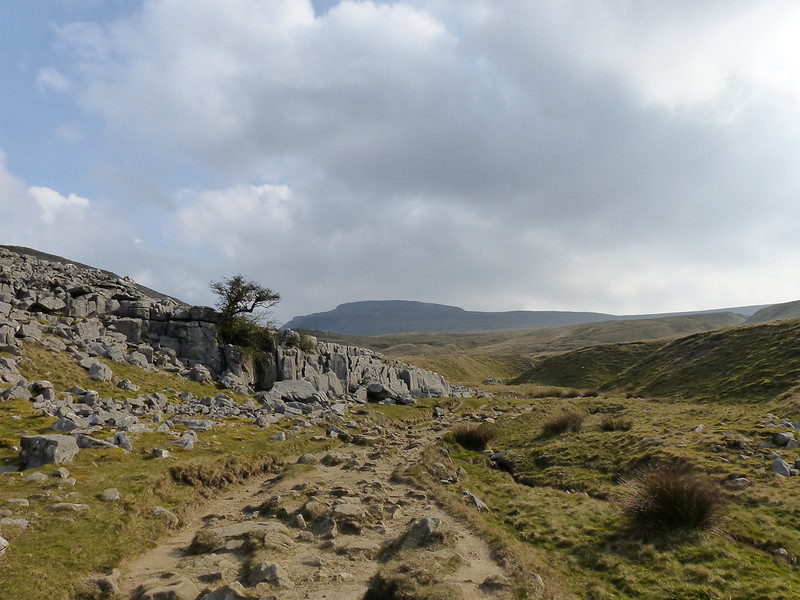 Ingleborough from just above Crina Bottom. 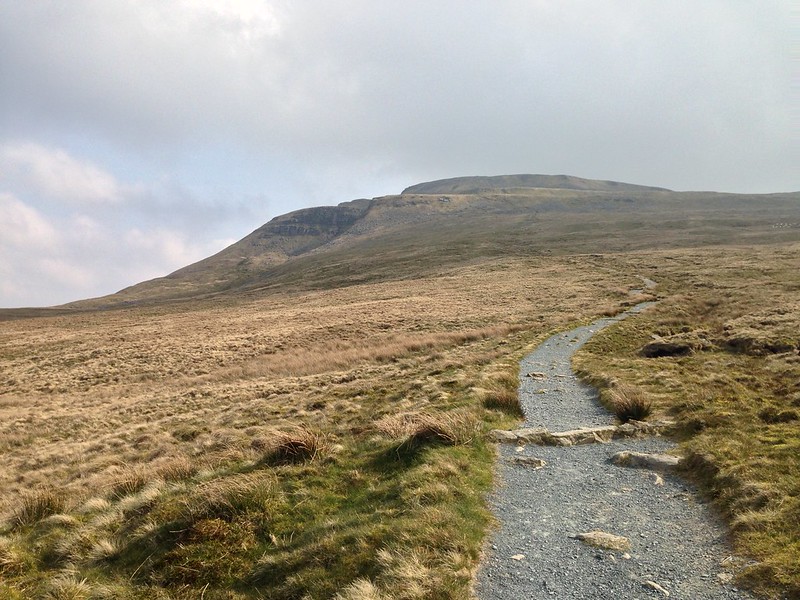 Approaching the final climb on to Ingleborough.

By the time I’d reached this point, the wind was really picking up and I’d added extra layers. The warmth of earlier in the week was not at all in evidence. 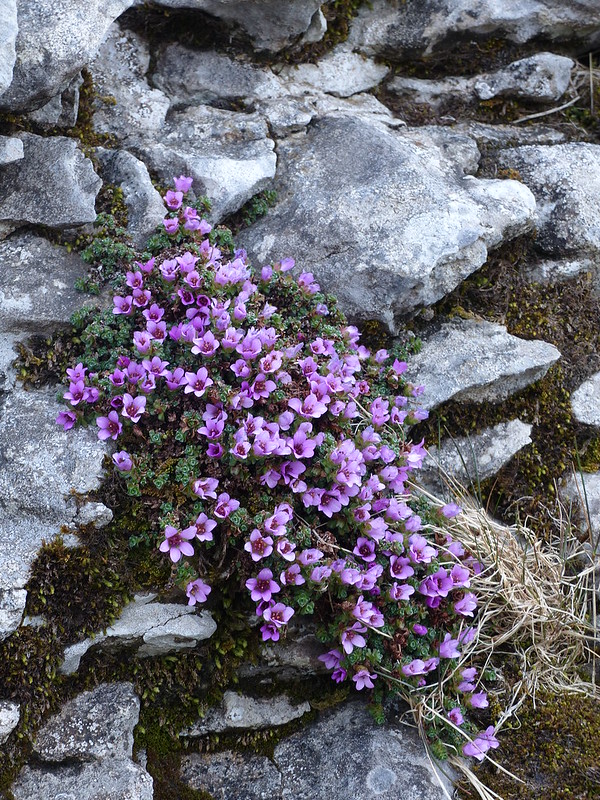 Purple Saxifrage on the limestone crags just short of the top of Ingleborough. 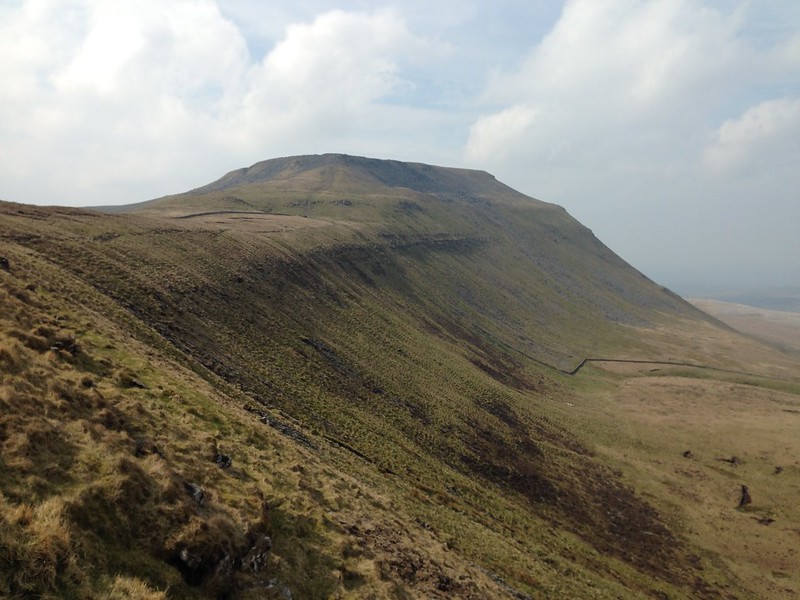 Looking back to Ingleborough from the path which skirts Simon Fell.

The large exposed summit plateau on Ingleborough was extremely windy. I couldn’t even find much respite in the shelter near the top, even though that has walls in a cross shape – you’d think at least one of the spaces created would be out of the wind, but none was very sheltered. Just off the top, I met two chaps who were crouched behind a large boulder, where there was a modicum of relief, one of whom was looking rather shaken. They warned me that the next section of ridge would be challenging, and they weren’t wrong. Fortunately, it was short lived, but it was so blowy on the first part of the descent that it was difficult not to stumble and stagger around. 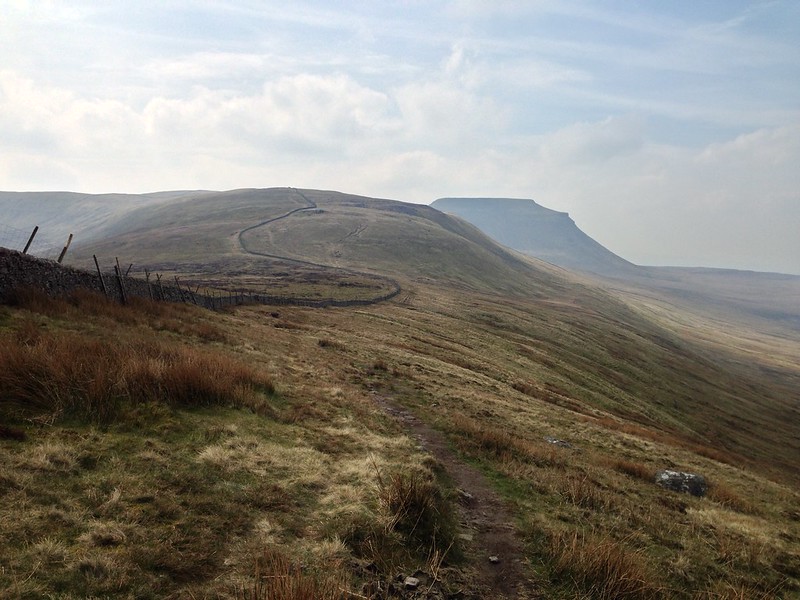 Looking back to Inglebrough from the col just before Park Fell. 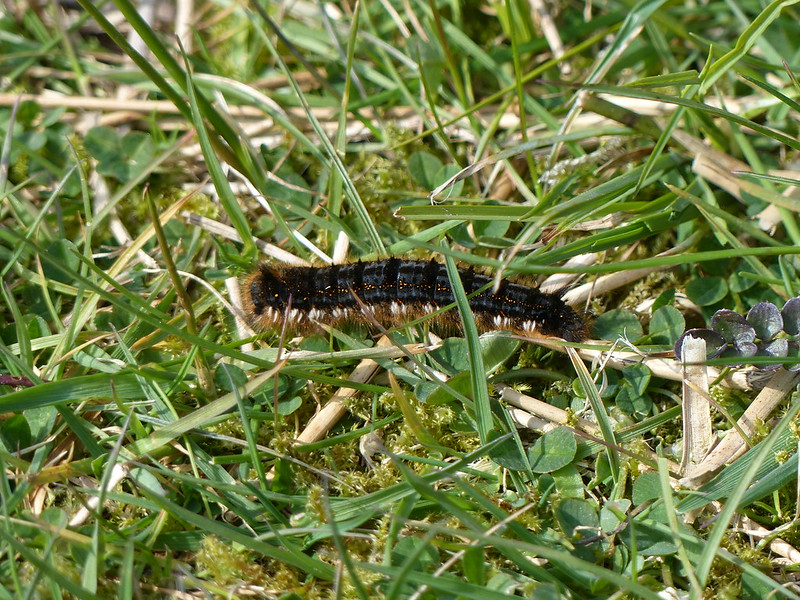 In the vicinity of Sleights Pasture Rocks, I stopped for some lunch behind a curious section of drystone wall. It was very tall, but only about 20 yards long, connecting a couple of large boulders. I couldn’t see what purpose it could possibly serve, apart from to provide me with a lovely sun-trap for my lunch. Down here between the hills, it was actually beginning to feel quite warm. There were even a few butterflies about. 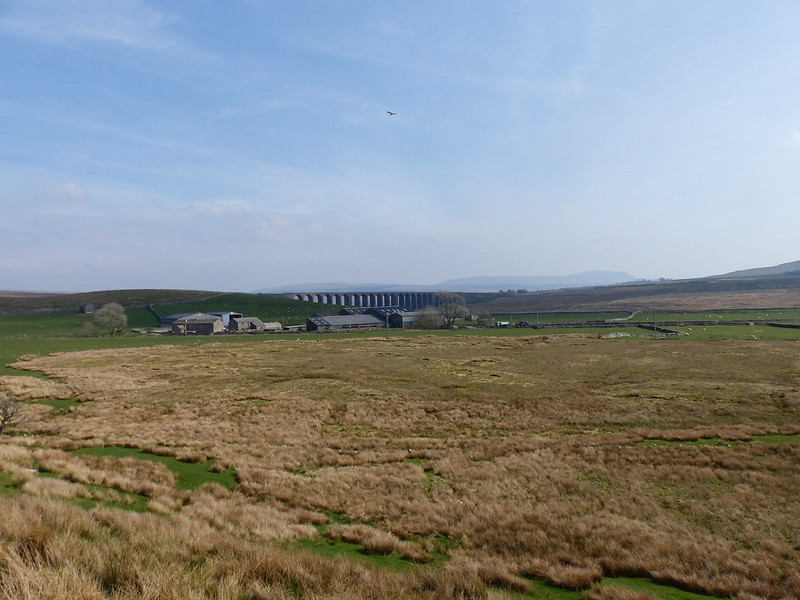 Ribblehead viaduct, Pen-y-ghent in the background. 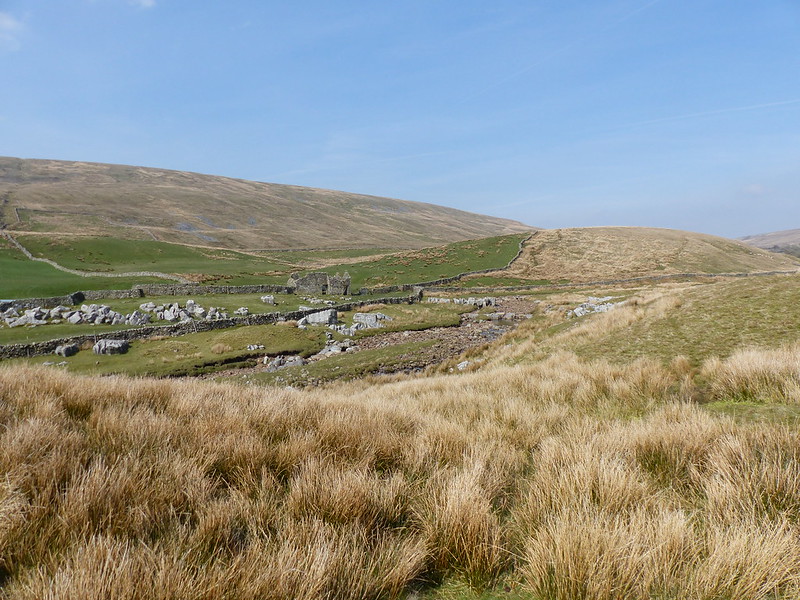 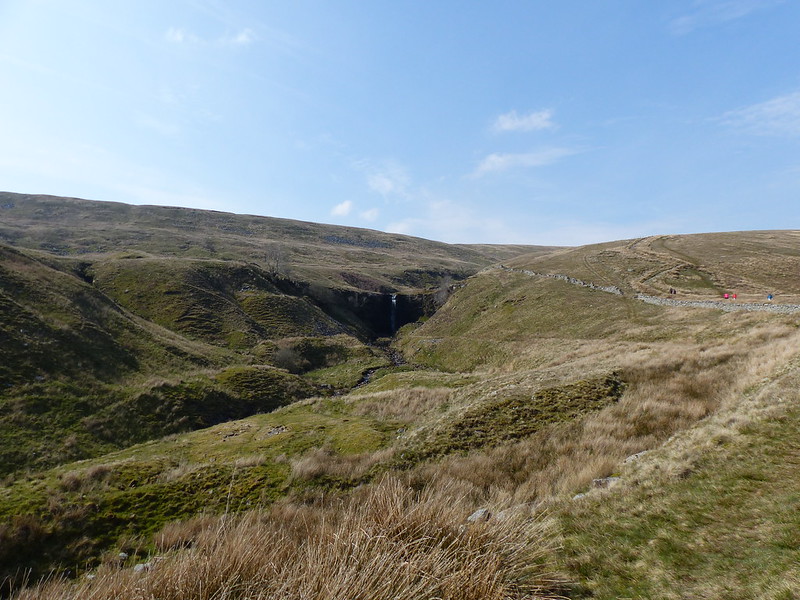 From Force Gill, I followed the path which climbs gradually towards Whernside. Just short of the ridge I met a couple who warned me that the wind on the ridge was ‘horrendous’ and that they had turned back because of it. I stopped to put on another layer, my coat, gloves and a balaclava. I needed them all. A small group passed me and I watched them staggering along the path. At this point, the path runs right along the rim of a steep edge. The wind was slamming full on to that face and then roaring up and over the edge. It was very tough going. I decided to hop over the fence and then through a gap in the wall which runs along the other side of the path.

At that point, I finally fell over, something which had been threatening to happen since I’d emerged into the full blast of the wind. On the ground, behind the wall, it was wonderfully sheltered and I lay there for a while to get my breath back. Walking on the far side of the wall and back from the edge proved to be much easier than walking on the path had been, although it was still very windy.

On the top, I chatted to a couple who were walking all of the Three Peaks and seemed to be having something of a torrid time. I suspect it was probably dark well before they finished. 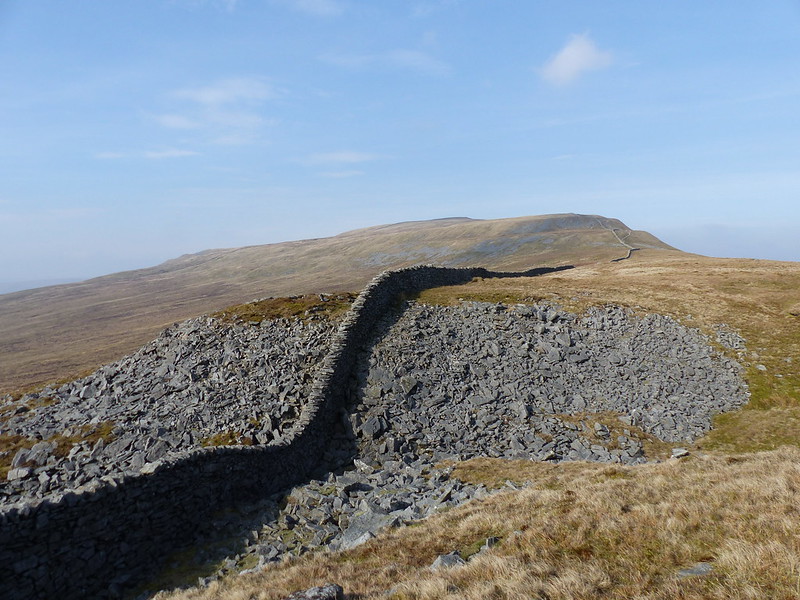 Fortunately, as I descended the wind abated steadily. Eventually, I even felt I could remove some of those extra layers again. 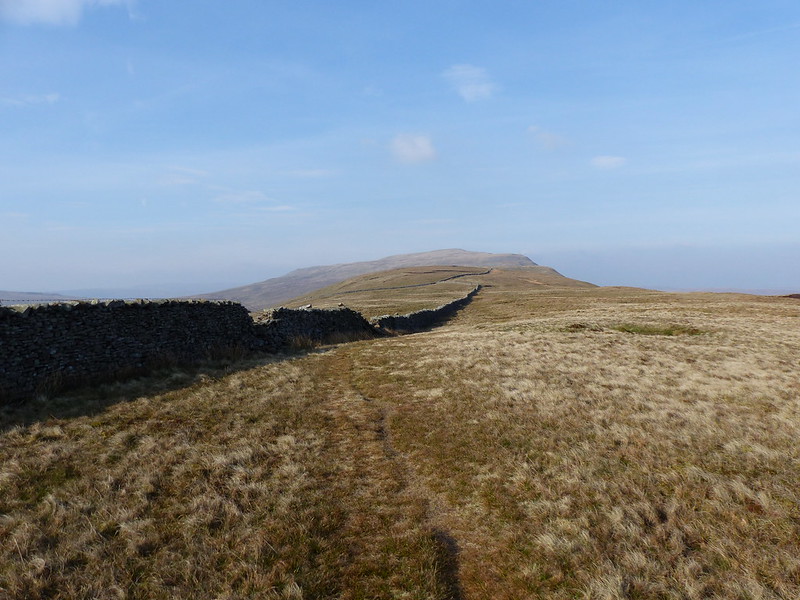 Looking back to Whernside. 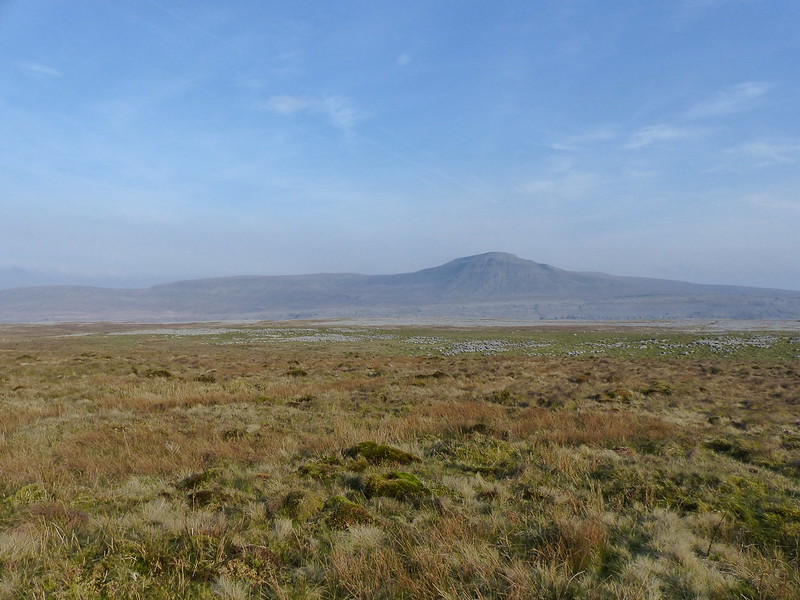 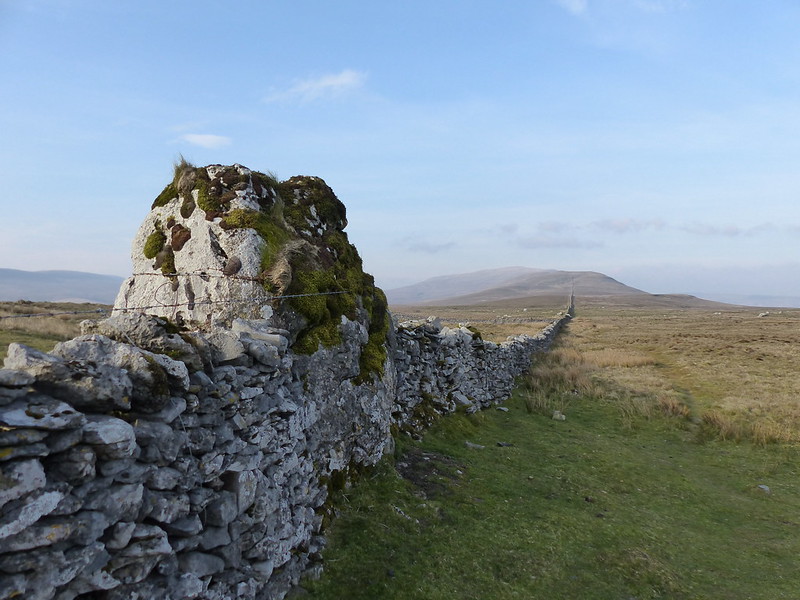 The OS map shows a standing stone on Ewes Top Moss which has been incorporated into a wall. I think this must be it.

By this point in the day, I was beginning to flag, and had emptied both of my water bottles. The walk down along the River Doe is lovely, but I’d forgotten how much up and down it entails and would frankly have preferred a more straightforward last lap.

In all though, a superb route and a great day, although much colder and windier than the photos suggest.

In the summer, I shall be attempting to complete the annual 10 in 10 challenge. Briefly, the idea is to walk a route over 10 Wainwrights in 10 hours or less.  You can find out more here.

Ingleborough and Whernside from Ingleton

11 thoughts on “Ingleborough and Whernside from Ingleton”