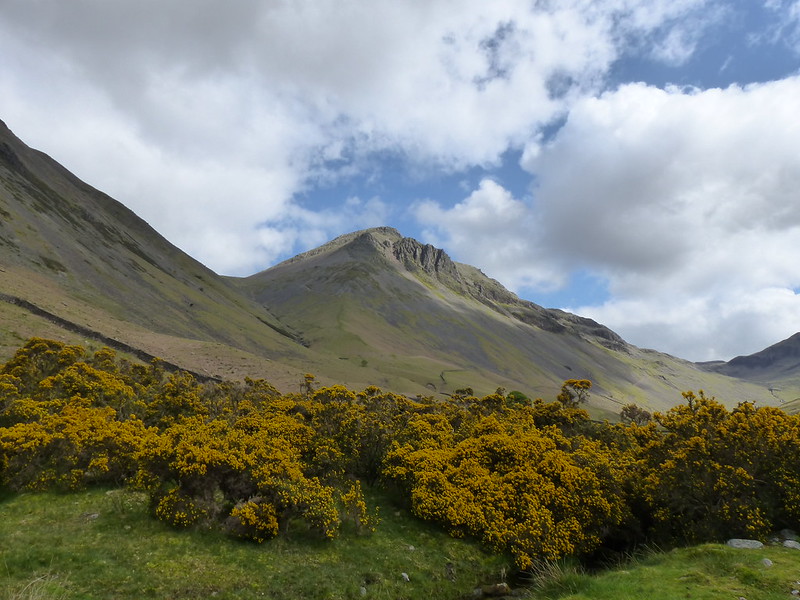 Our annual Bank Holiday camping trip to Nether Wasdale. This year it was a bit brass monkeys. Actually, it’s often very cold. And it wasn’t as cold as the forecasters had predicted. And we didn’t have the tent-destroying gales that we’ve experienced more than once in the past. And it mostly stayed dry. And the company was excellent, as ever. And the Herdwick burgers sold in the campsite shop and made from their own lamb from the farm were delicious, even if I did burn them somewhat on the barbecue.

A was once again involved in DofE practice and then wanted to stay at home because of forthcoming exams. TBH volunteered to stay at home to look after A (You might almost conclude that TBH doesn’t like camping when its chilly!). So it was just me and the DBs from our clan. Fortunately, we had lots of old friends to meet at the campsite to keep us company.

On the first day of our stay, we decided to repeat the route we walked last year, climbing Lingmell by the path alongside Piers Gill. I didn’t take so many pictures this time around. I didn’t even capture group shots at all of our many rest stops… 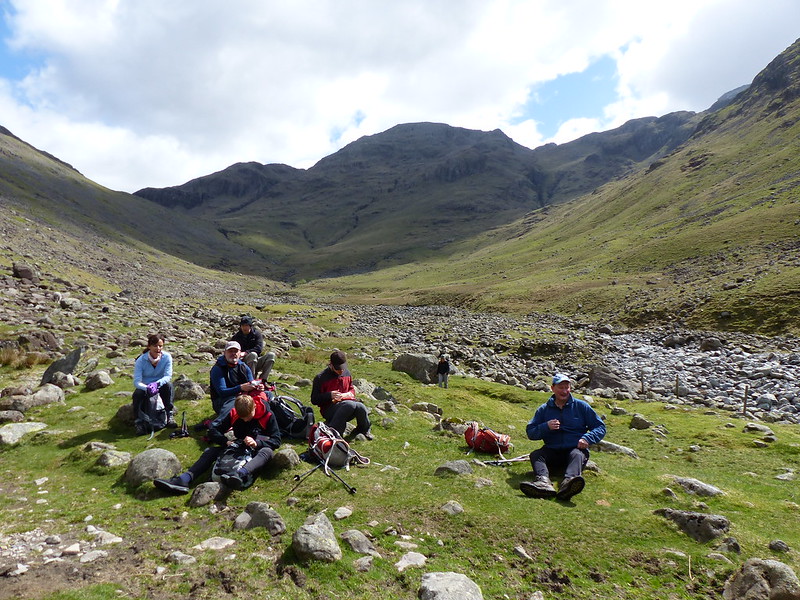 …of which I think this was the first. 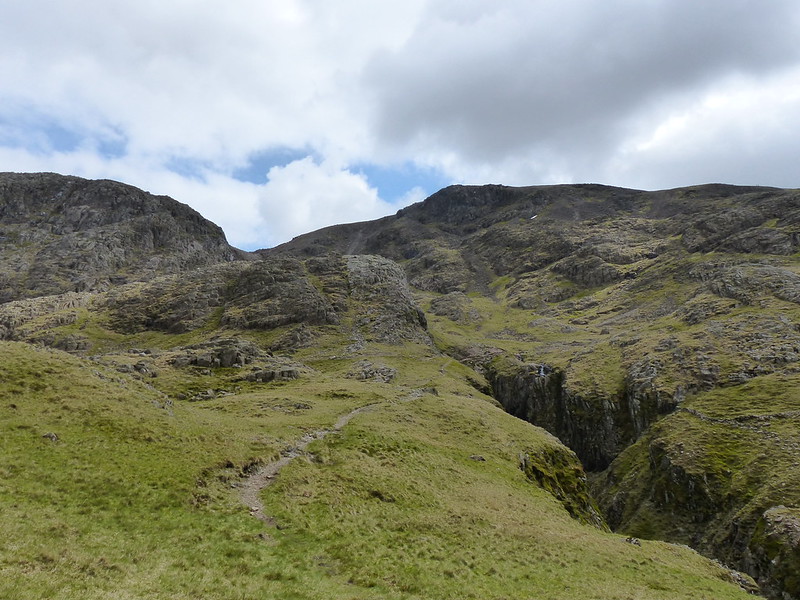 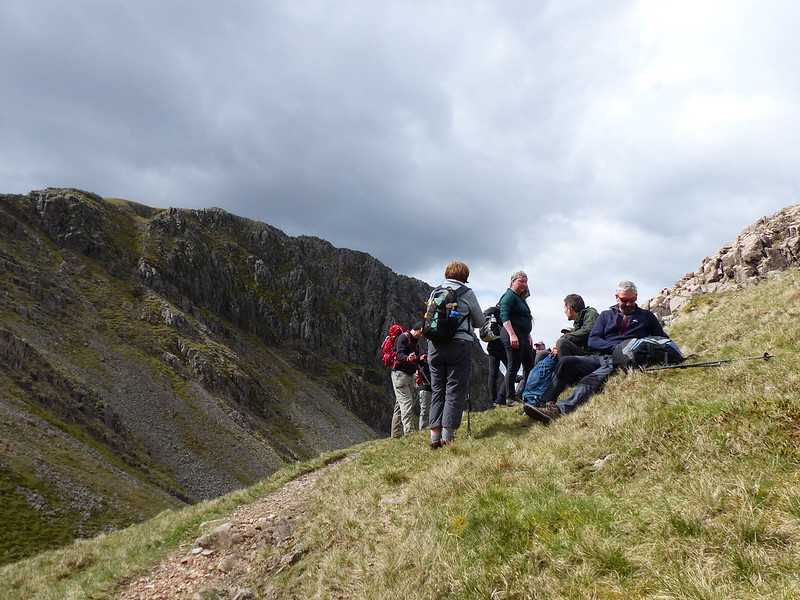 …was probably about the fourth.

We stopped again on the top, obviously… 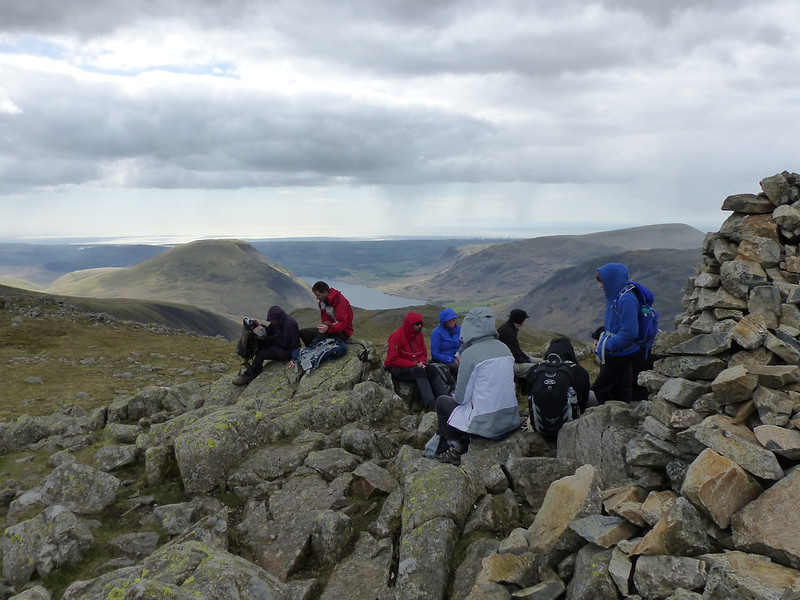 …but it was snowing at the time, so not the warmest spot. Easter weekend – river swimming; Spring Bank Holiday weekend – snow. Of course – that’s British weather for you: predictably unpredictable. 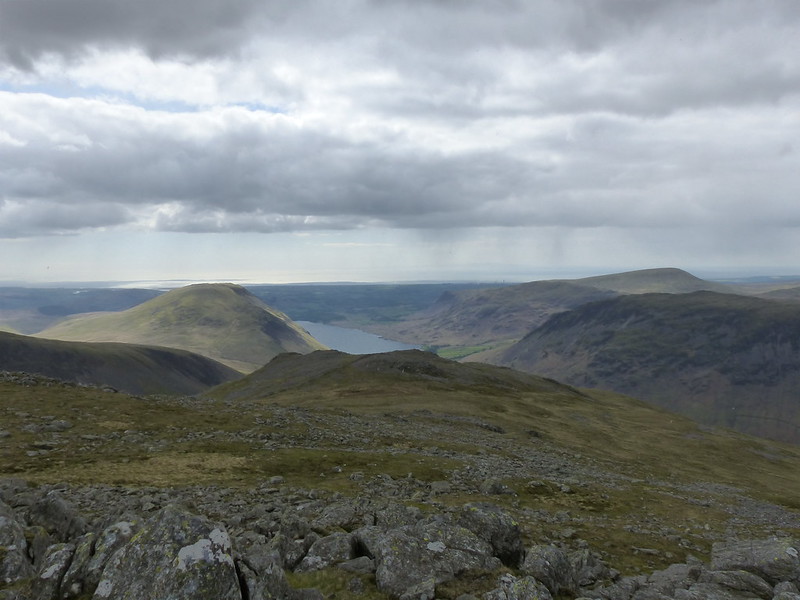 Wastwater and the Irish Sea, plus snow showers heading our way. 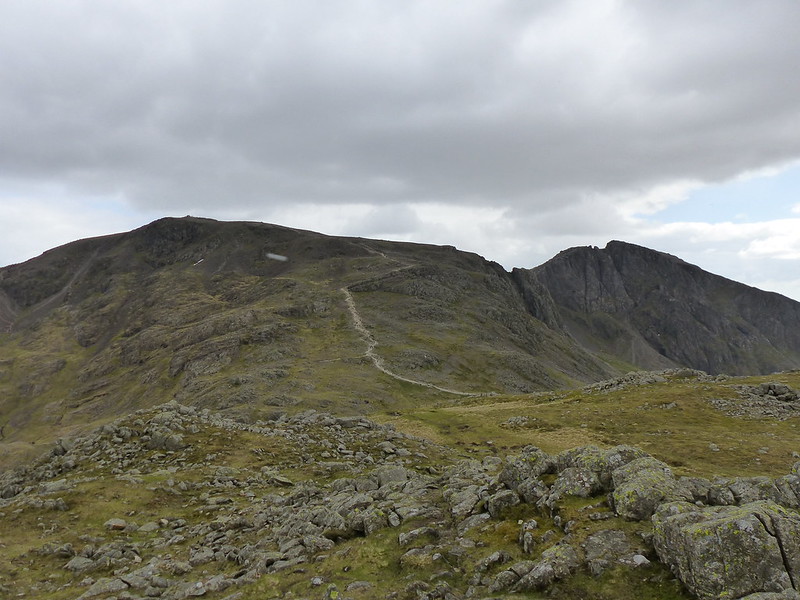 Scafell Pike and Scafell and approximately a million hikers. 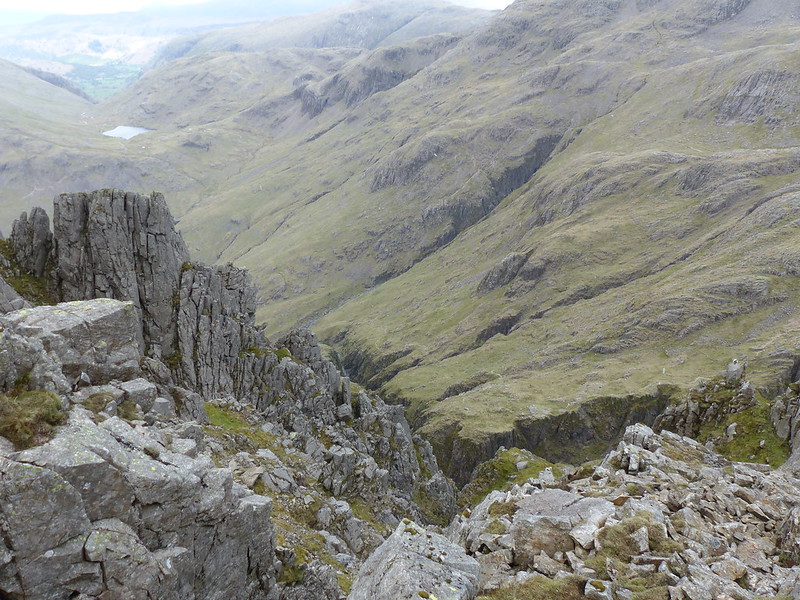 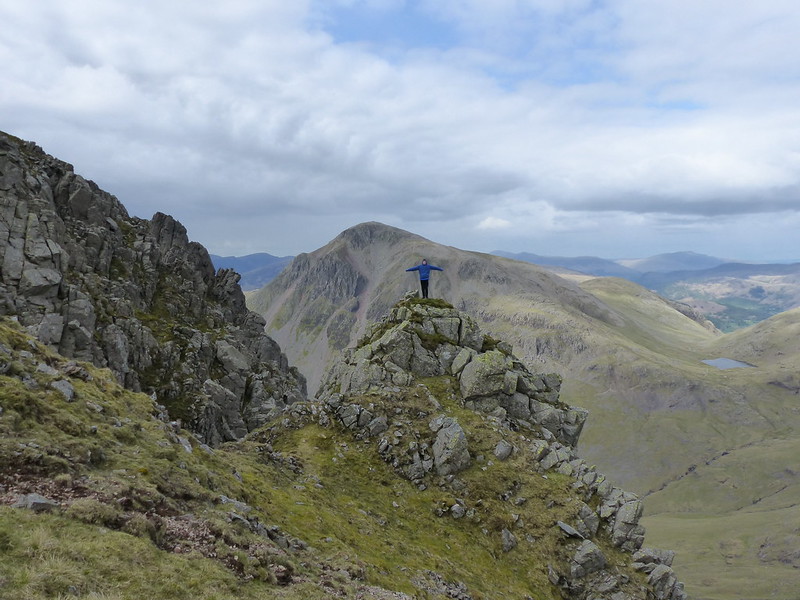 Little S couldn’t resist this pinnacle. My heart was in my mouth when he nonchalantly scampered up and down, but, of course, he was fine. 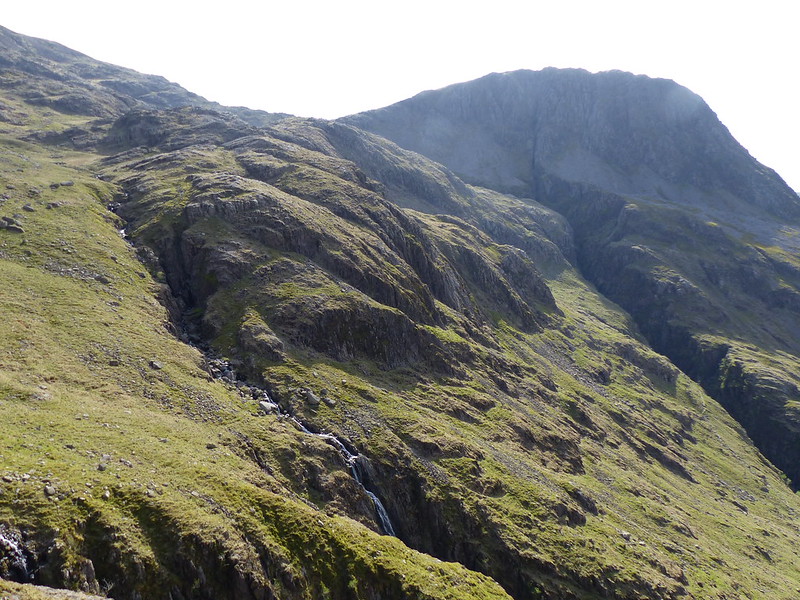 Lingmell, Piers Gill and one of Piers Gill’s tributaries, seen from the Corridor Route. 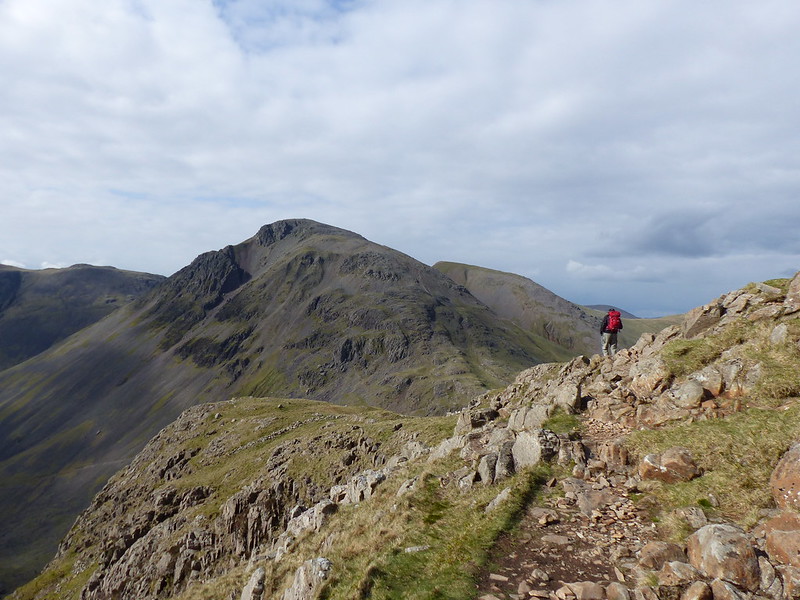 Great Gable really dominates the view for much of this walk. Our friend J pointed out to me last year that you can pick out Napes Needle relatively easily from the Corridor Route. Through the magic of my camera’s zoom, here it is… 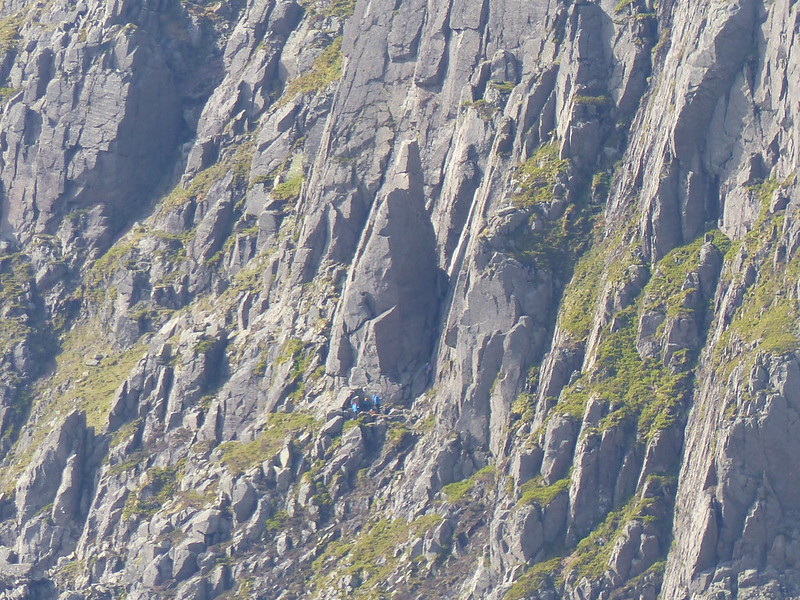 You can see three people in front of the Needle and, perhaps by clicking on the image to see a larger version on flickr, you can also see that two others are ‘threading the Needle’, a well known scramble which I’ve never done, and am not likely to do now, I don’t think. 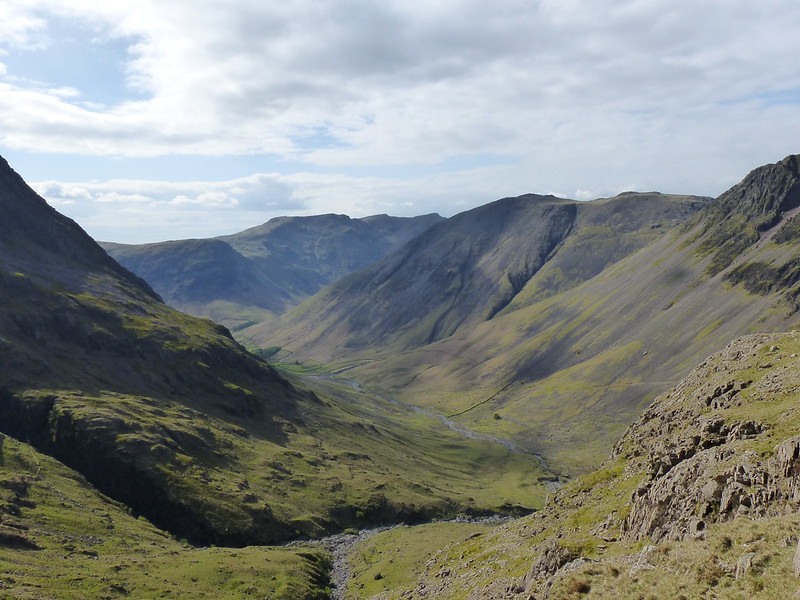 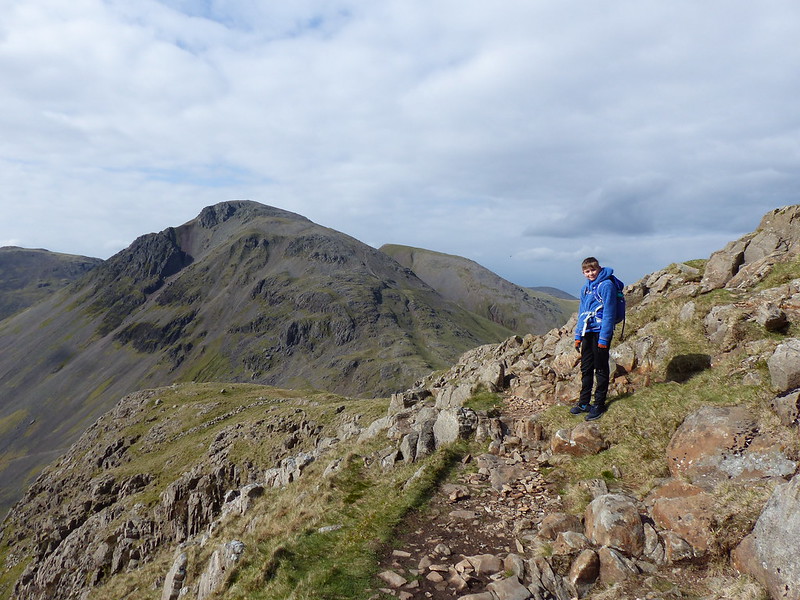 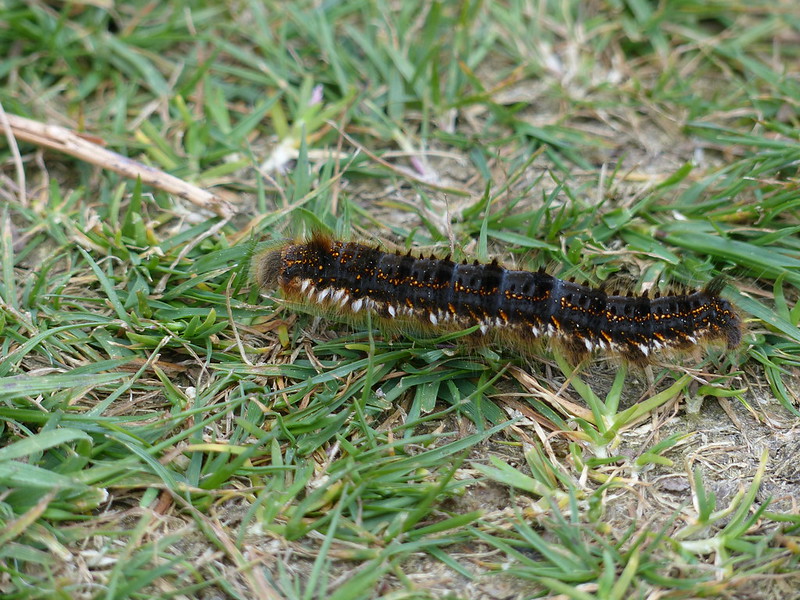 This spring seems to have been a bumper one for spotting hairy caterpillars. This rather attractive specimen maybe destined to become a moth called The Drinker, because of the caterpillar’s penchant for supping dew. Then again, I could easily be wrong about that. 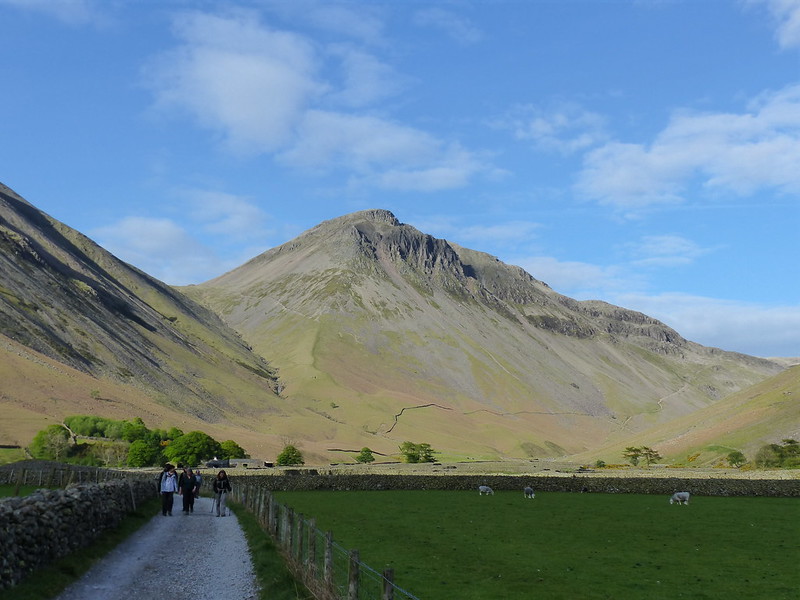 Great Gable yet again. It’s become slightly irksome that I’ve revisited almost every peak in the area in recent years apart from Gable, and its neighbour… 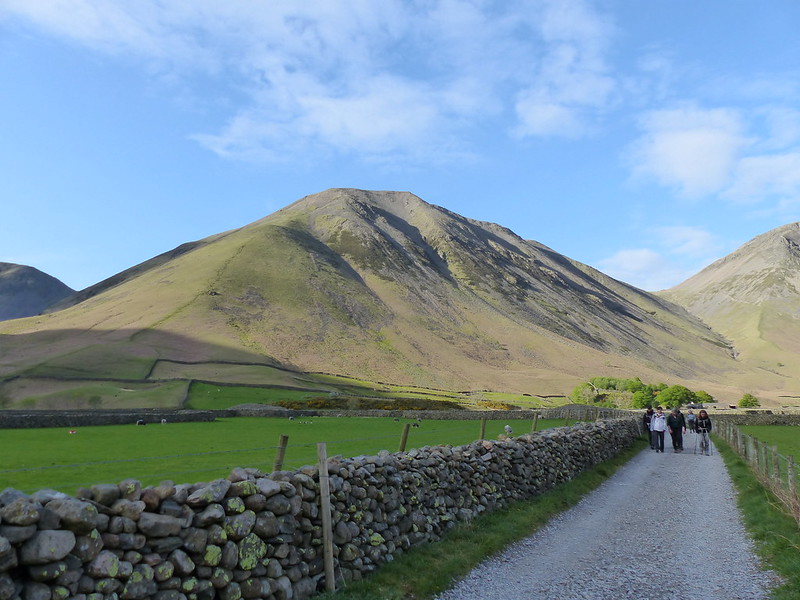 On the Sunday, we chose to repeat a route which, in a number of variations, we’ve walked many times before – a circuit taking in Irton Pike, the village of Santon Bridge and a wander back along the valley of the River Irt. 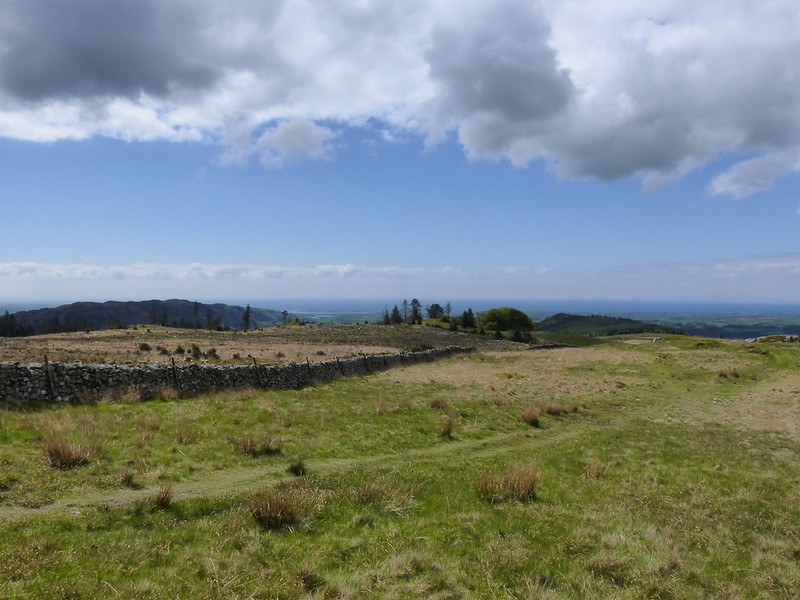 I took even less photos than I had the day before. 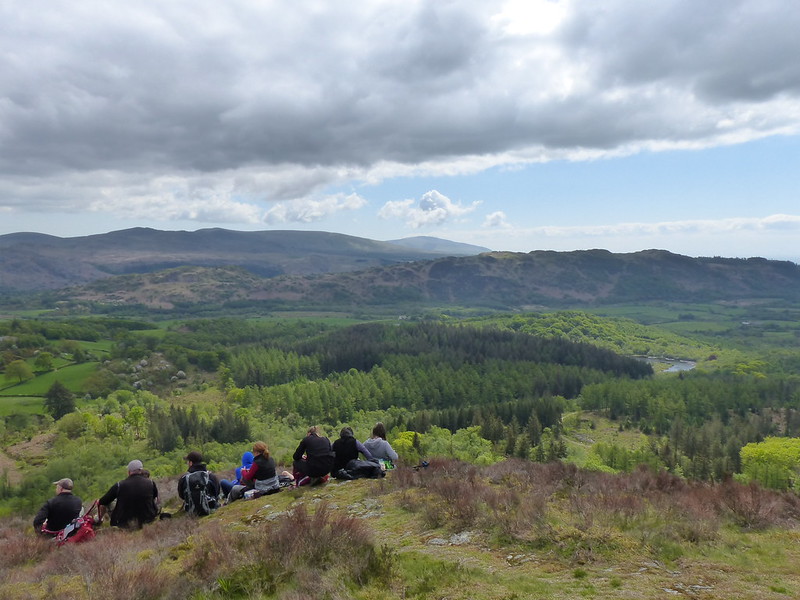 We had a leisurely stop on the summit of Irton Pike – I may even have dozed off for a while. 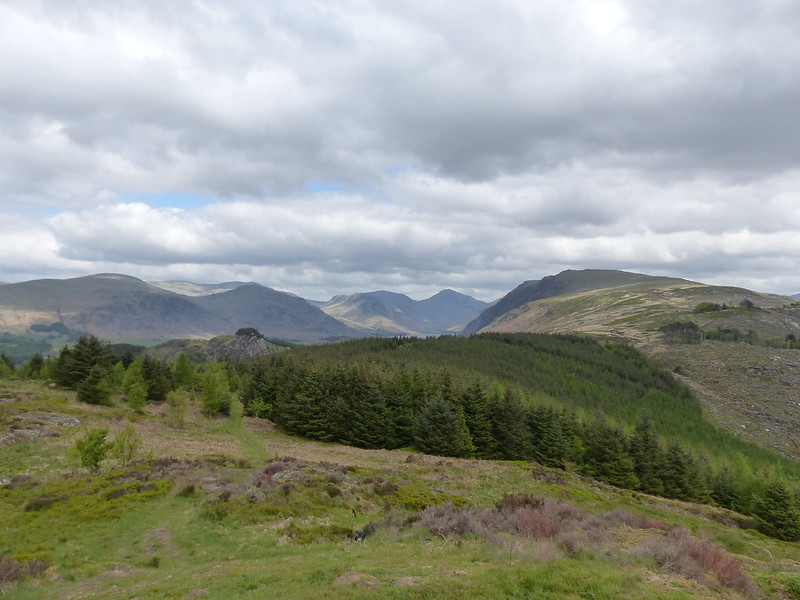 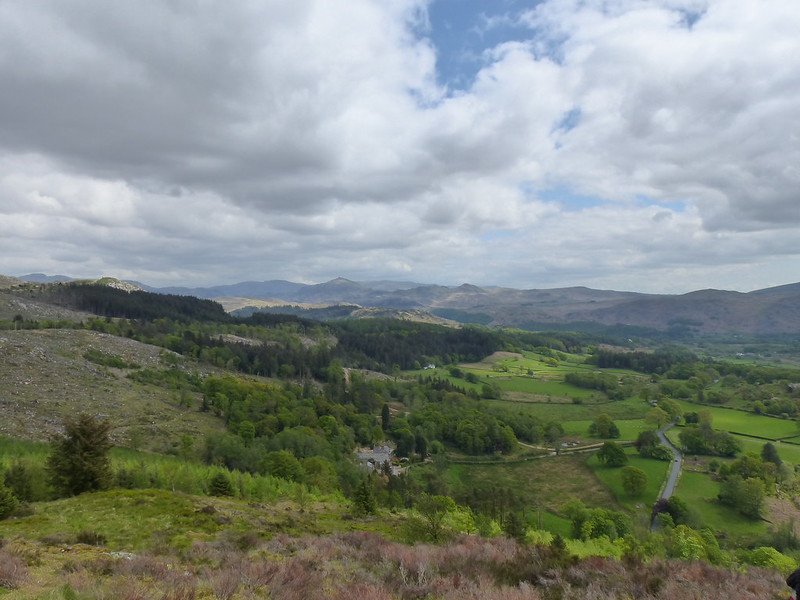 On the final day we needed to pack-up, faff about and mull over what we should do once we’d finished faffing about. The DBs had heard Andy’s tales of whopping great plates of waffles and ice-cream from the cafe in Seascale, so a visit there was very high on their agenda. Eventually, they were persuaded that we could manage that, but still also fit in an ascent of Buckbarrow, another favourite outing from our Wasdale trips. 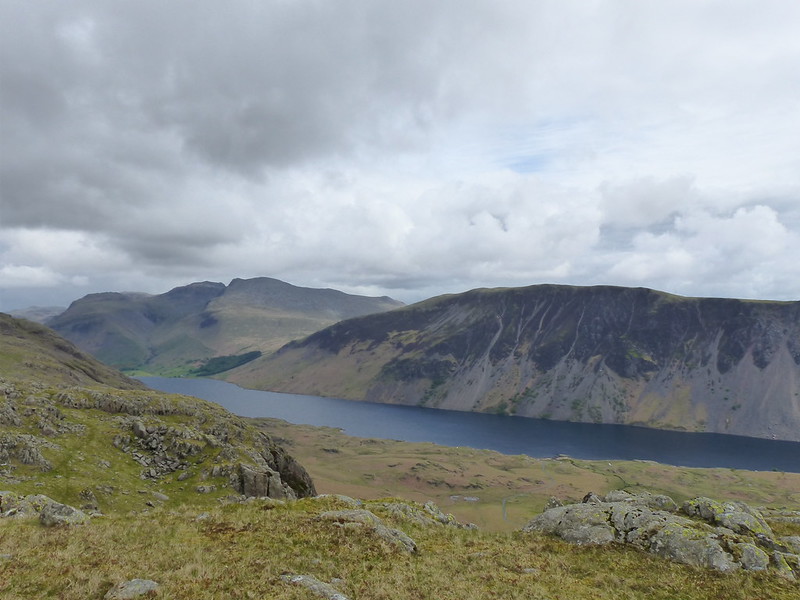 Scafell Pike, Scafell, Wastwater and the Screes from Buckbarrow. 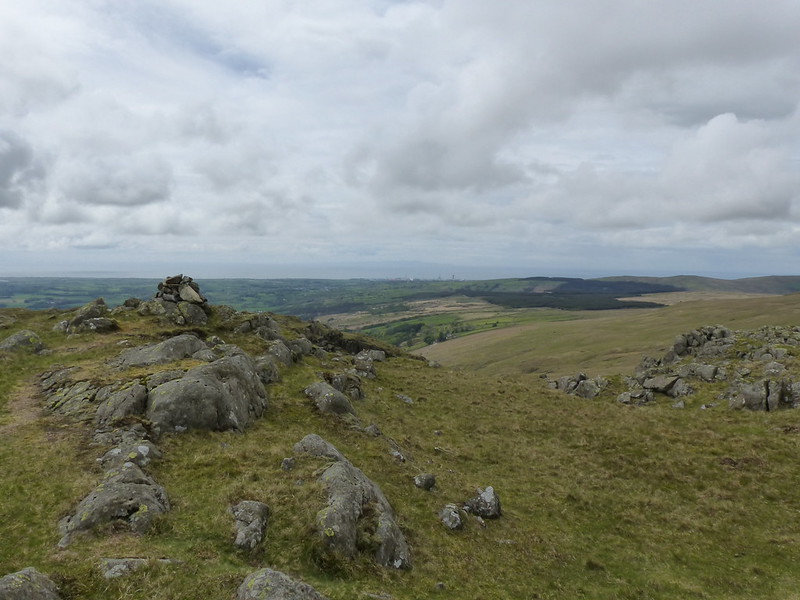 The Isle of Man is out there somewhere. 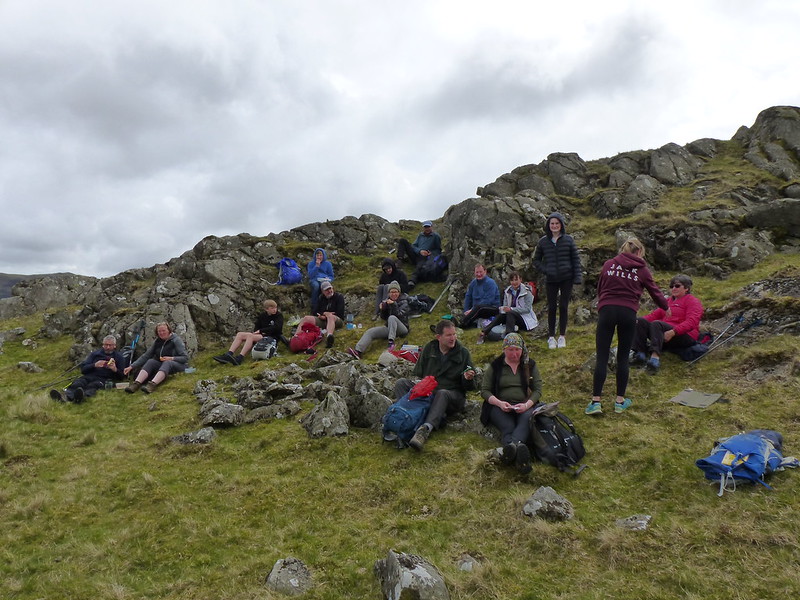 The 2019 crew, having the obligatory brew/lunch stop. 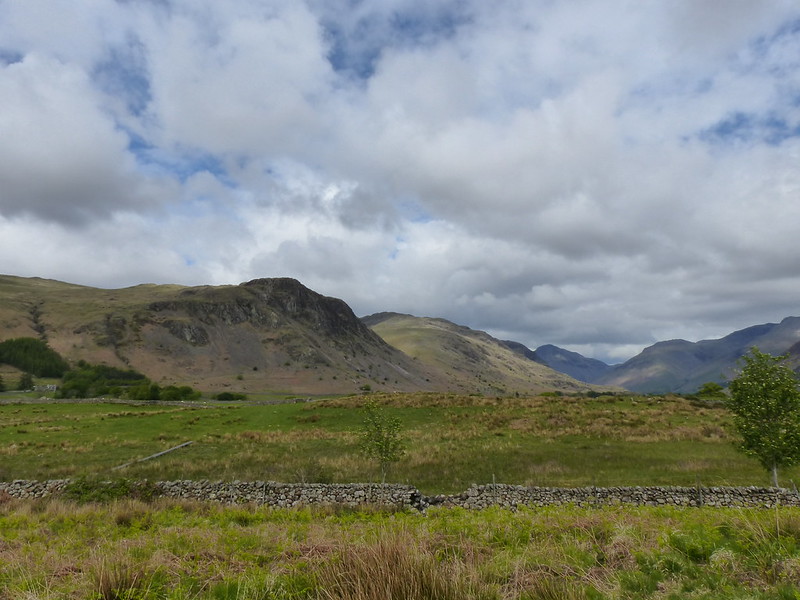 And finally, if you were wondering about the awkward title: I manoeuvred “three nights” into the title, so that I could cram Three Dog Night into the post…

5 thoughts on “Three Nights in Wasdale”