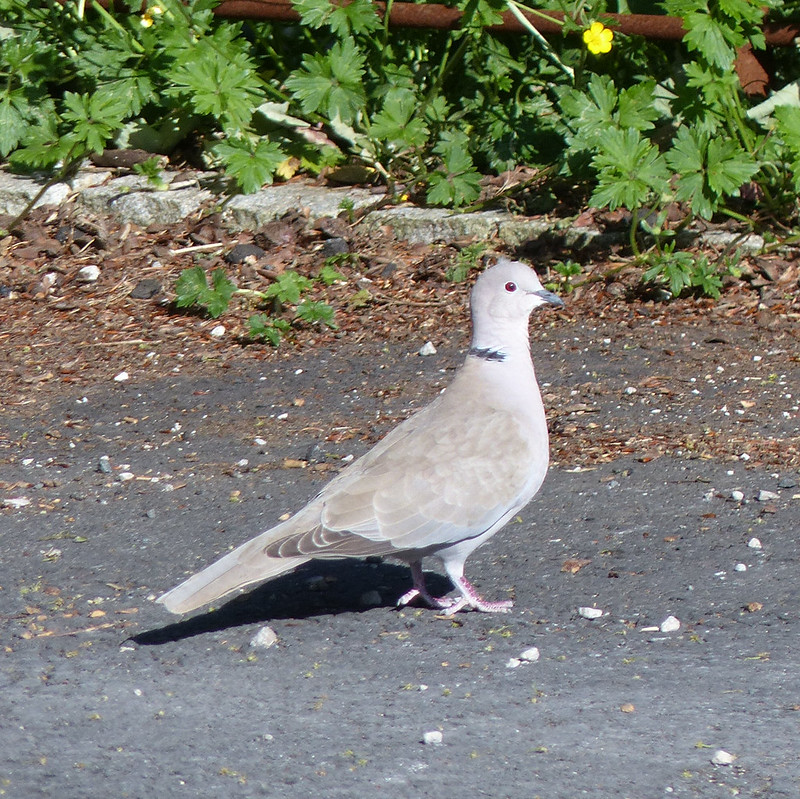 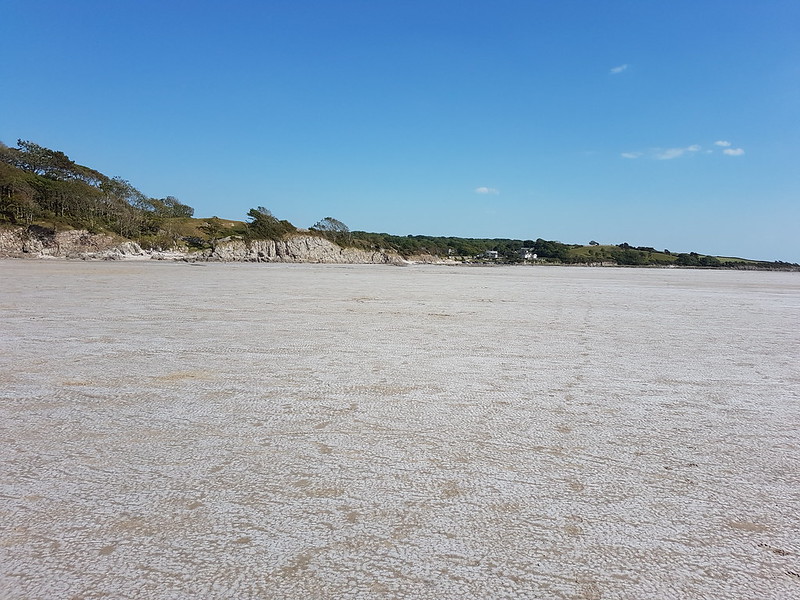 Back on the sands – you can see the grey ‘skin’ which starts to develop on the sand after several hot days with low tides. 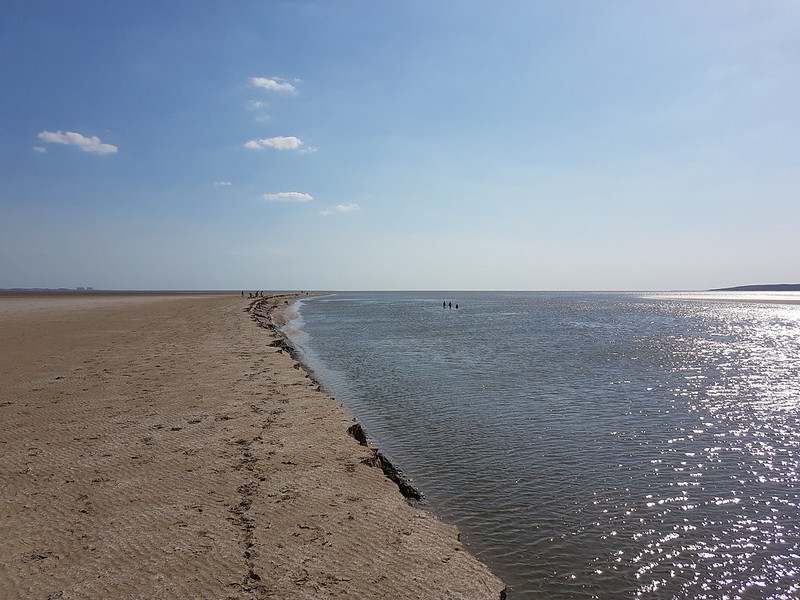 There were people paddling in the channel. Since then B and his friends have started visiting this part of the Bay on hot days for a swim – the water is barely deep enough I gather, but they are still very glad of it. 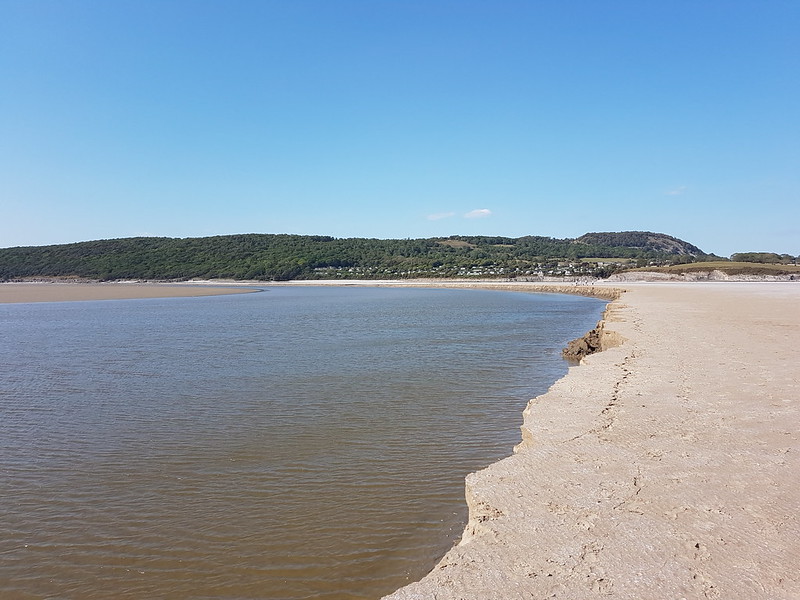 In the distance – quite hard to pick out – a group spanning at least three generations had a number of long fishing poles propped up on tripods. B and his mates have also tried fishing here. They caught nothing. Fishing with good friends and catching nothing sounds like the best kind of fishing to me, but I never really caught the fishing bug. We’ve since heard that there are Sea Bass to be had down near Jenny Brown’s at high tide. B assures me that he’s not after Sea Bass, he’s holding out for shark apparently! 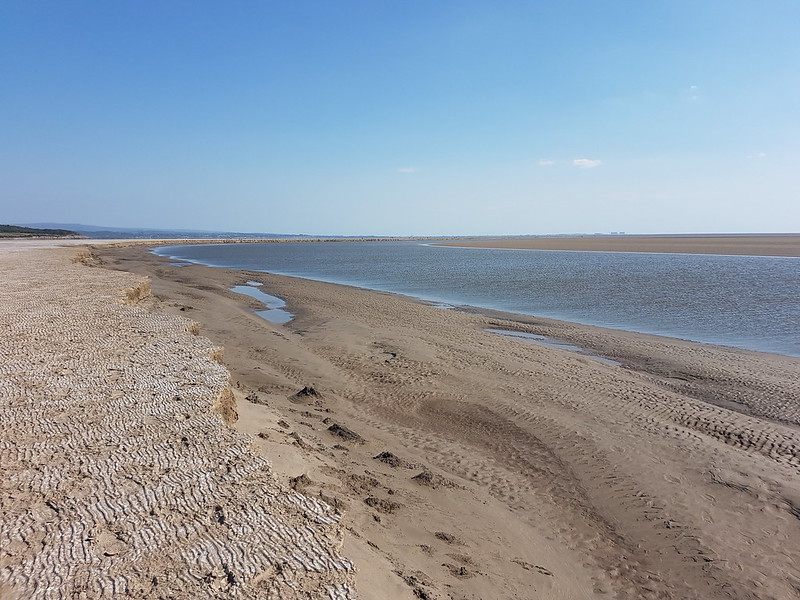 Morecambe Bay may be the most beautiful bay in Britain. Thanks to the tides, it drains more or less completely twice a day. You can be standing on sand that a short while before was under thirty feet of water and vice versa. It’s the vice versa that you have to worry about because the tide comes back in very quickly, not in a line like an advancing army, but in fingerlets and channels that can easily surround you and catch you by surprise. People sometimes go for walks, then belatedly notice that they are on a giant, but steadily shrinking sandbar.

Bill Bryson again. He doesn’t really do lukewarm – he either loves it or hates it. Most beautiful? That’s a bit of a stretch. Sandwood Bay springs to mind as a contender, but I am very fond of Morecambe Bay obviously.

I’ve finished ‘The Road to Little Dribbling’ and enjoyed as I always seem to with his books. 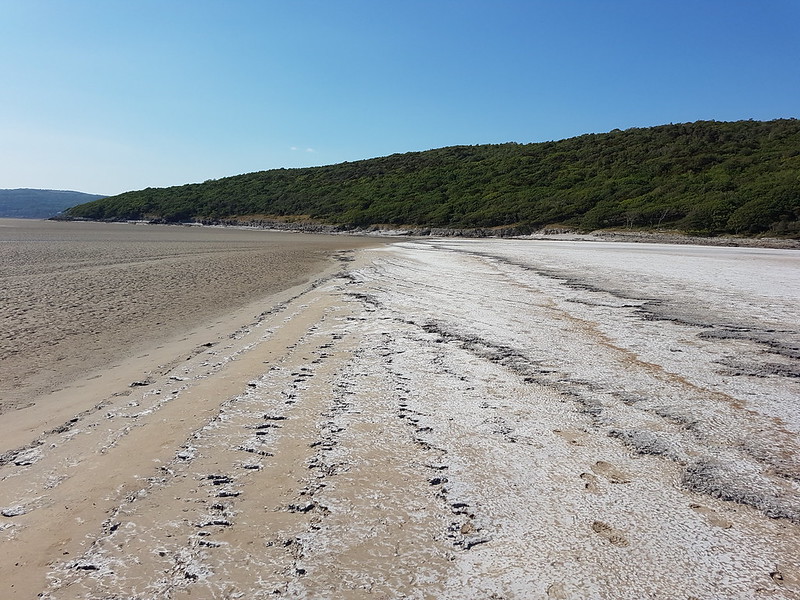 The channel had connected with the Kent and was now much further out from the shore.  Above you can see the now dry channel where it formerly ran.

After a couple of very thirsty walks, I’ve taken to carrying a rucksack on my longer local walks, so I can carry a drink. It’s also convenient to stow my camera away there too, which is all very well, until I want to capture a moment quickly. So these Brimstone butterflies… 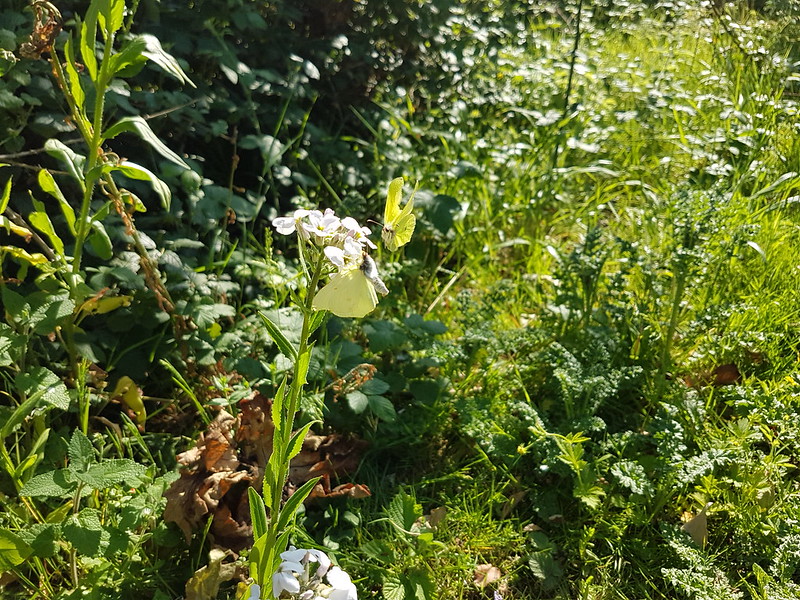 …which were disporting themselves on some Dame’s-violet had to be photographed with my phone. Not entirely satisfactory, but you can see the strong contrast between the buttery yellow male and the much paler female.

When I was wondering about whether or not the House Sparrows in our hedge would nest or not, I was completely forgetting the early morning racket we hear in our bedroom every summer. I’m not quite sure how I managed to forget that cacophony. Even though our house is pretty modern, in each corner of the roof there’s a tiny hole up under the eaves. At least two of them were occupied this year. This male… 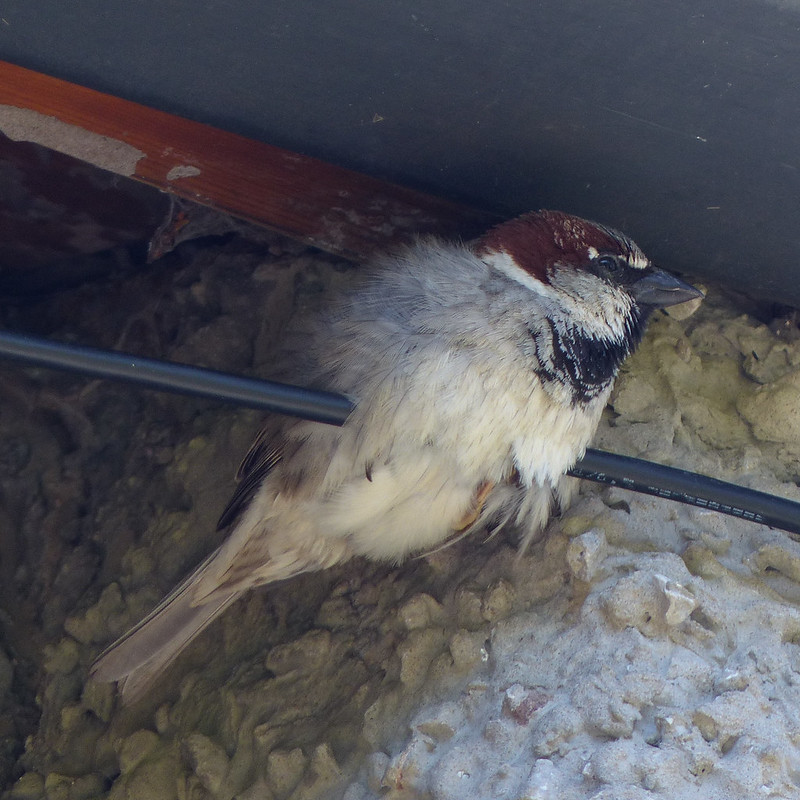 …is just pausing during a prolonged concerto of chirruping.

I’ve continued to make bread every couple of days, but not to take photographs. I made an exception for this one, because I hadn’t made a loaf like this before, a farl apparently… 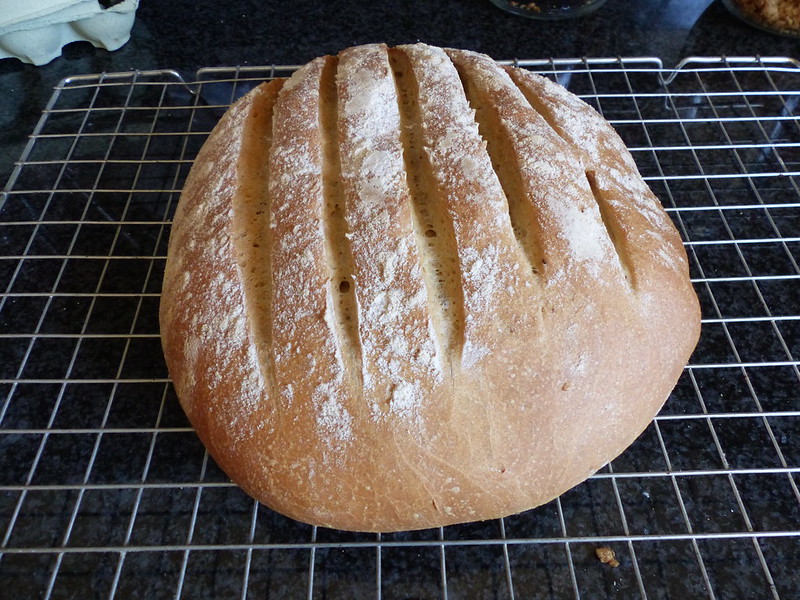 Turned out rather well and has become a bit of a favourite. 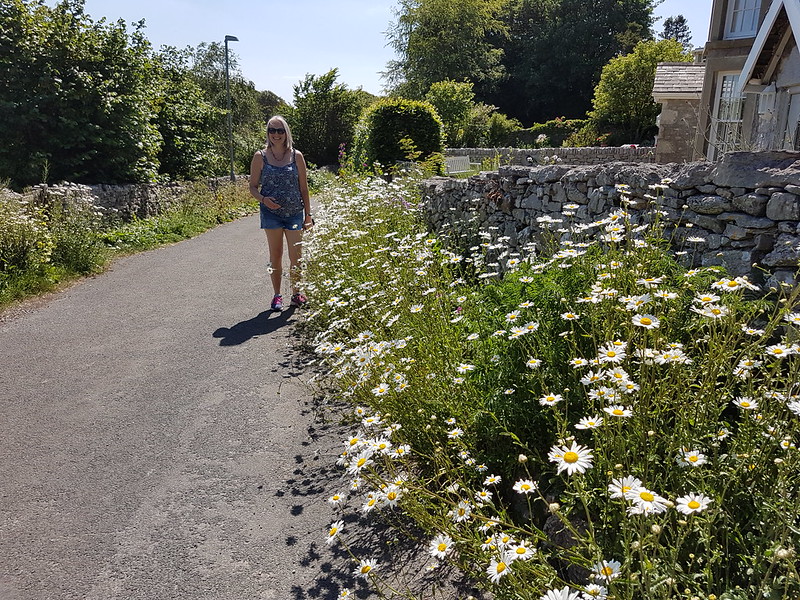 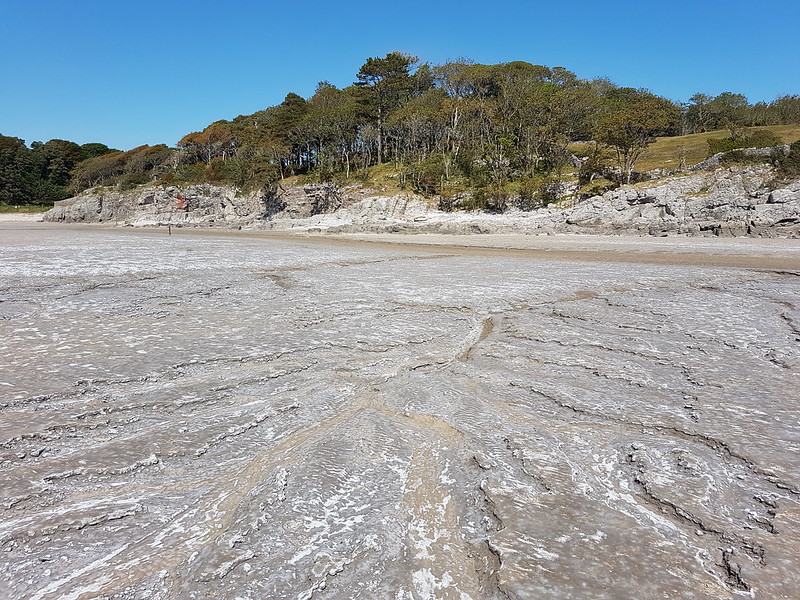 Another wander on the sands. This is the day after the previous walk. 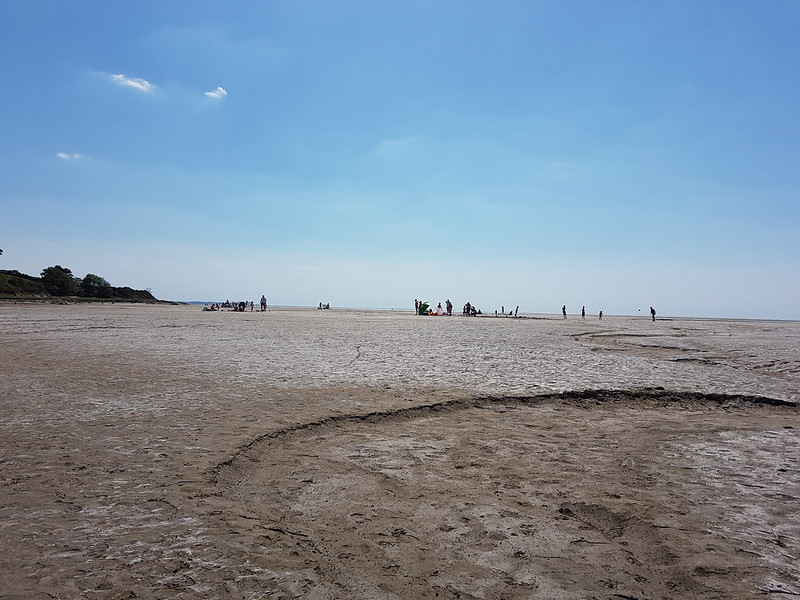 More sun-seekers. Our neighbour told me that many had driven up from Liverpool. 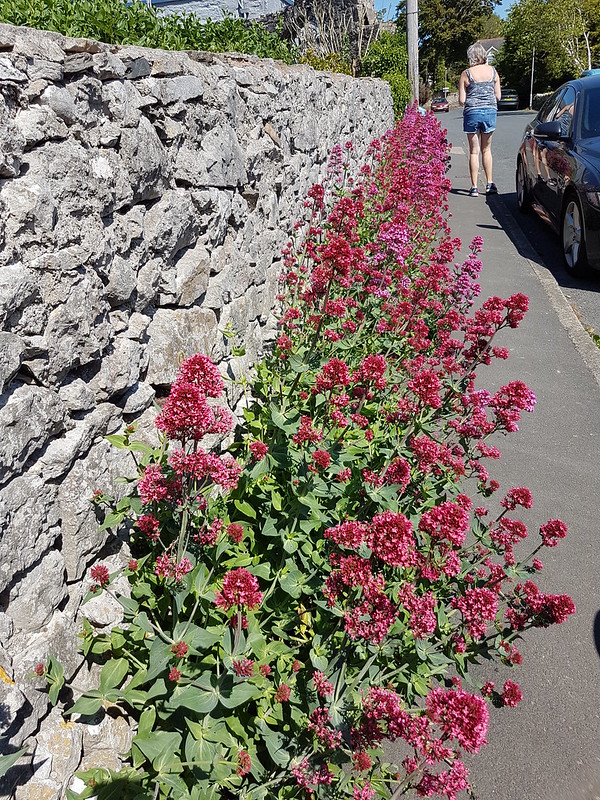 Red Valerian outside the Silverdale Hotel. 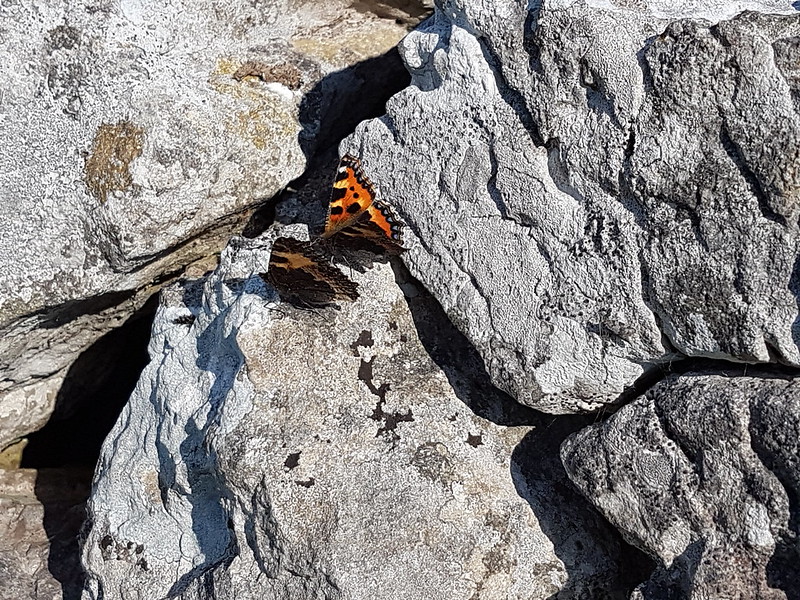 8 thoughts on “The Kent Channel, A Farl, House Sparrows.”