All good things come to an end, and eventually we had to move on from the Dordogne. Fortunately, we were only moving on to the Tarn Gorge, just as we did on our previous trip. This time, as you can see, Andy had booked plots with a direct view of the river, which was rather magnificent.

Sitting around the campsite chilling out is surely a key ingredient of any camping trip and I certainly did a lot of that on this trip. I got through a lot of reading material. I didn’t use our hammocks, but the rest of the family all loved them and there was often keen competition to secure a berth, since we only had two between us.

Regular swims in the river were also key. I’d bought a full-face mask with integrated snorkel from Aldi before the trip and it might just be the best eighteen quid I ever spent. The fish here were plentiful, varied and absolutely fascinating. I only wish I had photos to share.

The Dangerous Brothers, including Andy, an honorary DB, (ODB ?), spent much of their time climbing the cliffs to find ridiculously high spots from which to launch themselves, sometimes with a large inflatable shark in tow, which they christened DB Aquatic. I don’t have any photos of them jumping (I preferred not to watch), but there’s some slo-mo footage of their antics on Andy’s blog here.

By contrast with our last visit, I don’t seem to have taken many photos around the campsite, which is odd because the views are amazing. The cliffs up the valley were lit at night (B was convinced it was the sunset, bless him) and although they looked huge from below, we realised, later in the week when we went up to the rim of the gorge to watch the sunset, that they were actually only a tiny portion of the entire valley side.

I suppose wasps are always a feature of camping in the summer. This trip was no exception, but this year we had the added joy of regular visits from hornets. I can’t decide if these two photos show hornets or not. I’m not sure they’re big enough – certainly, when they were buzzing around our tent they seemed much bigger than this – about the size of Jack Russel at least. 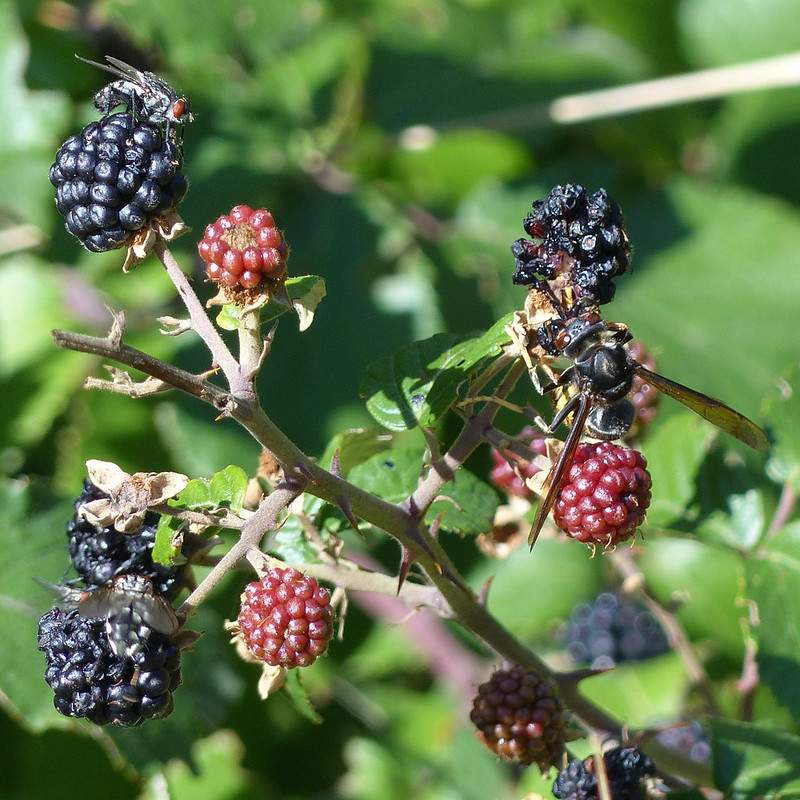 On the drive between the two campsites, at an Aire, we even spotted a Hornet’s nest, a football sized paper sphere hidden away in amongst some brambles.

We did quite a bit of walking whilst we were in the Tarn Gorge, so lots more wildlife and scenery photos to come, and I’m getting ahead of myself a bit, but when we were travelling back to the UK we witnessed a rather sobering event, when French customs officers found a man stashed away in a fellow holiday-maker’s Trailer Tent. I assume that the contents of the trailer had been jettisoned to make room for the man – presumably an asylum seeker trying to get to the UK. Frankly, it was all pretty alarming. We’d never been out of sight of our own trailers, and hadn’t stopped near the port, so when they were searched we didn’t have any stow-aways.

When we finally got back, after two solid days of driving and an overnight ferry, we did find one unscheduled passenger though, a shield bug…

I don’t know if this is a species found in the UK or not, but it did demonstrate how easily you could inadvertently import a non-native species. I don’t think we’d brought any hornets back with us, fortunately.

And On to the Tarn Gorge

4 thoughts on “And On to the Tarn Gorge”