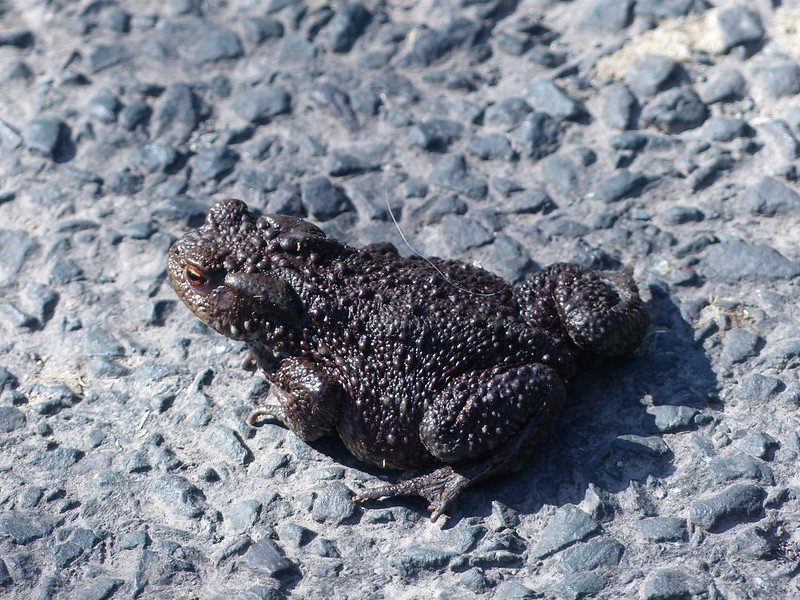 This sizeable toad seemed to be marooned in the middle of Cove Road. It seemed a bit warm for it be sat out in the sun and, even though there was noticeably less traffic back then, the road didn’t strike us as a safe place for it. We weren’t sure what to do with it, but when we passed the same way later it had gone – not squished on the tarmac, fortunately, but out of sight. 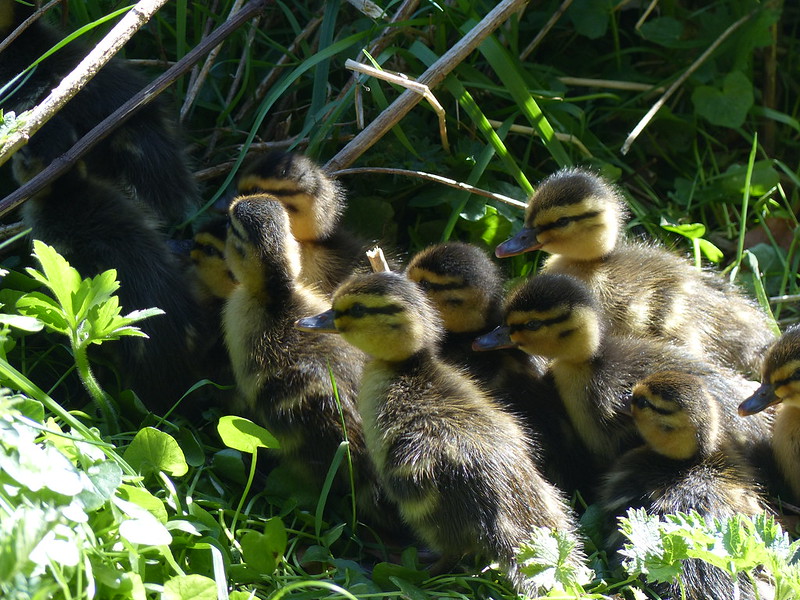 These mallard chicks were also on Cove Road, but more keen to get off the road and away… 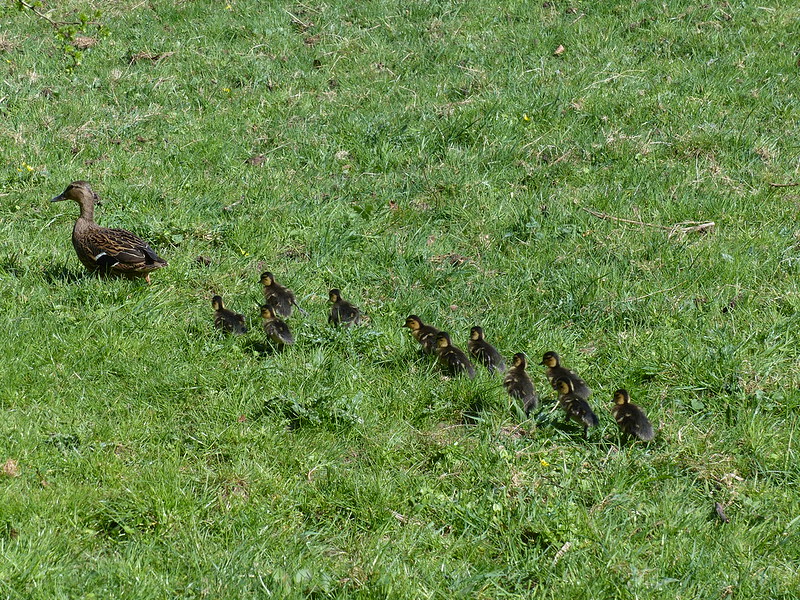 At the end of Cove Road is the Cove, strangely enough, and that gives access to the sands where there’s plenty of room to… 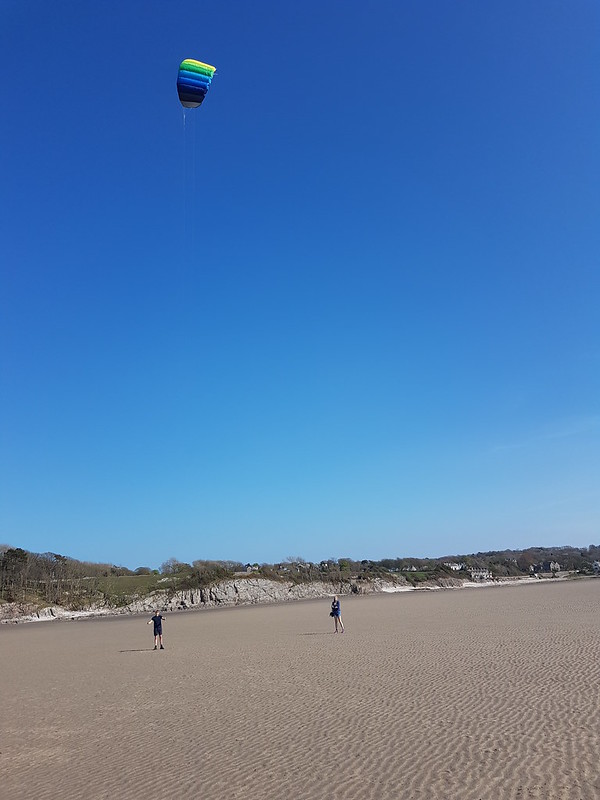 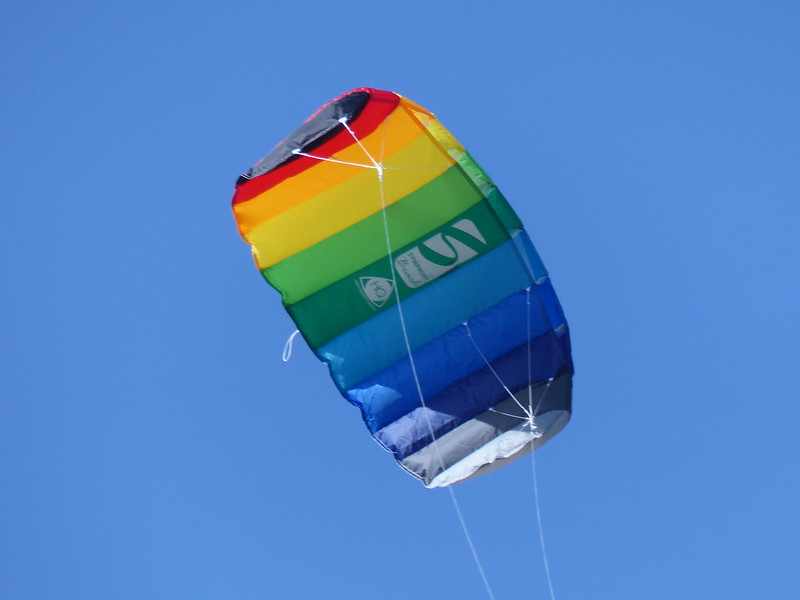 Not exercise really, and so not within the letter of the rules at the time, but we thought close enough to the spirit of the thing. And there was certainly no difficulty with social distancing! 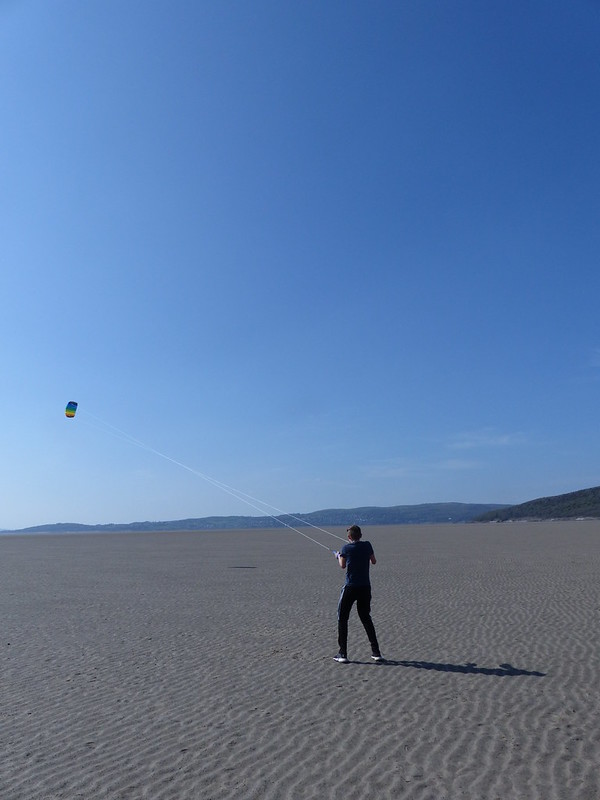 A good time was had by all and we even got Little S out of his pyjamas and out of the house. 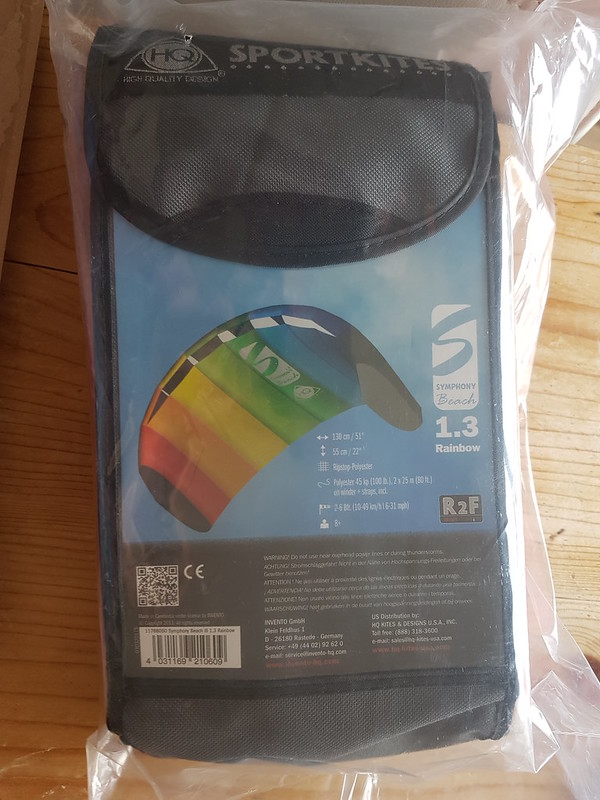 This was another of my birthday presents. I’ve carried around a tiny pocket kite at the bottom of my rucksack for years, but it very rarely gets used. TBH has a huge stunt kite which also rarely gets used, because it’s not especially portable and you need a gale to fly it. I wanted something in-between – which would fit in a pack, so no struts, but with two lines for a bit more interest. This fits the bill perfectly.

I really am easily pleased.

All reggae cover versions today. First the aforementioned Toots and the Maytals version of ‘Country Roads’:

The Horace Andy’s take on Bill Withers ‘Ain’t No Sunshine’:

‘Billy Jean’ as performed by Shinehead on his wonderful first album ‘Rough and Rugged’:

And the Easy Star All-Stars taking on probably my favourite Pink Floyd tune:

They covered the entire album. Probably just so that they could call it ‘Dub Side of the Moon’. Covering entire albums seems to be their thing. They’ve done ‘OK Computer’ and ‘Sergeant Pepper’s Lonely Hearts Club Band’ and probably others. I’ve seen them live a couple of times and can heartily recommend that experience. 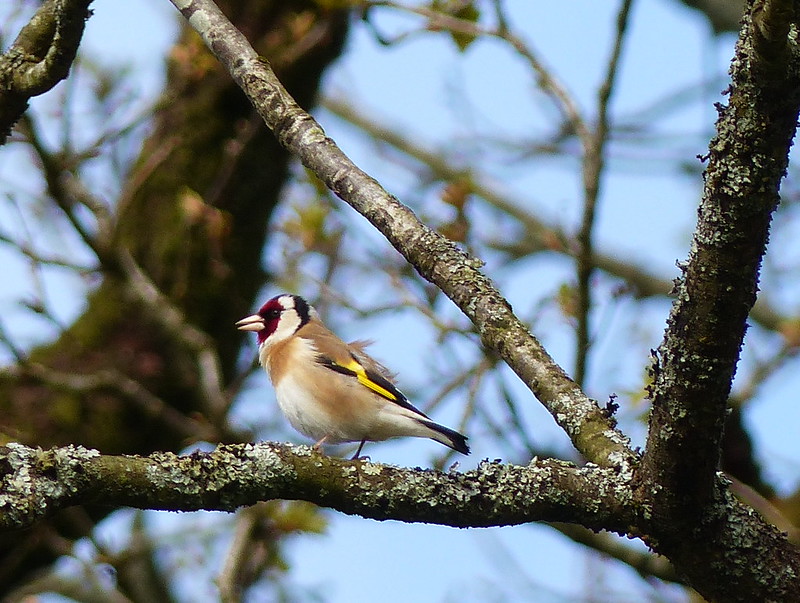 I didn’t take any photos on the Sunday of our Bank Holiday Weekend. The best that can be said of the weather is that it wasn’t as rough as it had been during the night – which was one of those nights in a tent when you lie awake listening, during moments of relative calm, as a wave of wind comes roaring down the valley, crashing through the trees until it hits the tent and sends it into another paroxysm of shuddering. After a very wet night, increasingly creatures of habit, we eventually opted to repeat last year’s Sunday outing and spent an afternoon between the beach at Seascale, beachcombing and throwing a ball around, and Mawson’s cafe and ice-cream parlour, which once again was a very big hit. 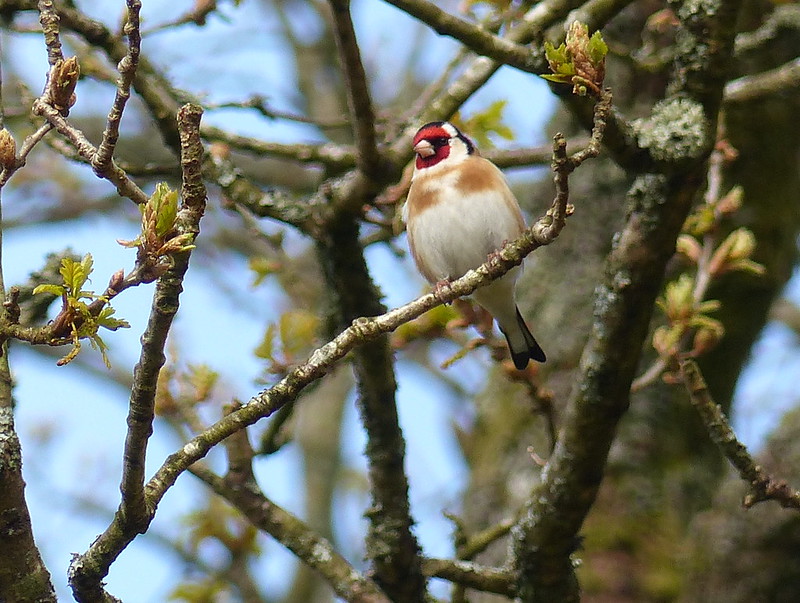 On the Monday, after a bit of campsite faffing about: leisurely breakfast, taking photos of a goldfinch in the trees by the tents etc, we eventually all set off for a mass hike up Buckbarrow. There was a farm yard to navigate first, where there were cute and very tame lambs to be stroked…. 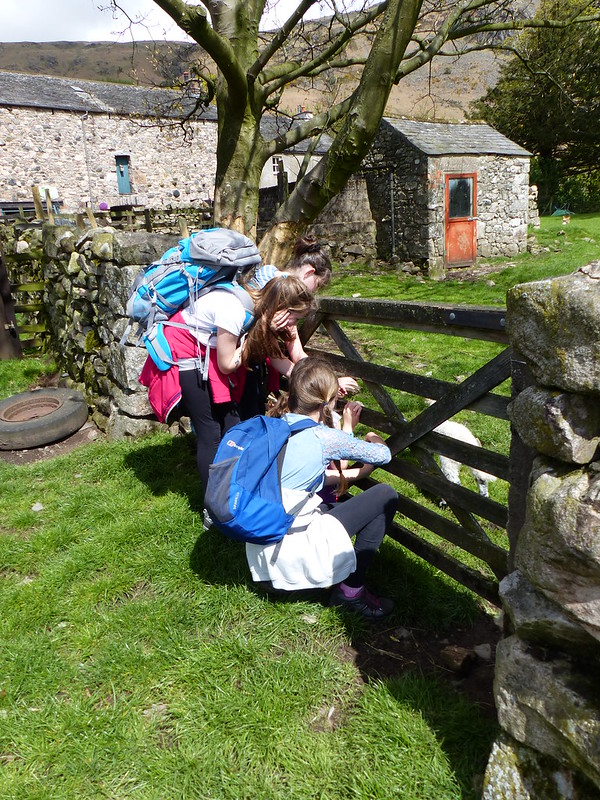 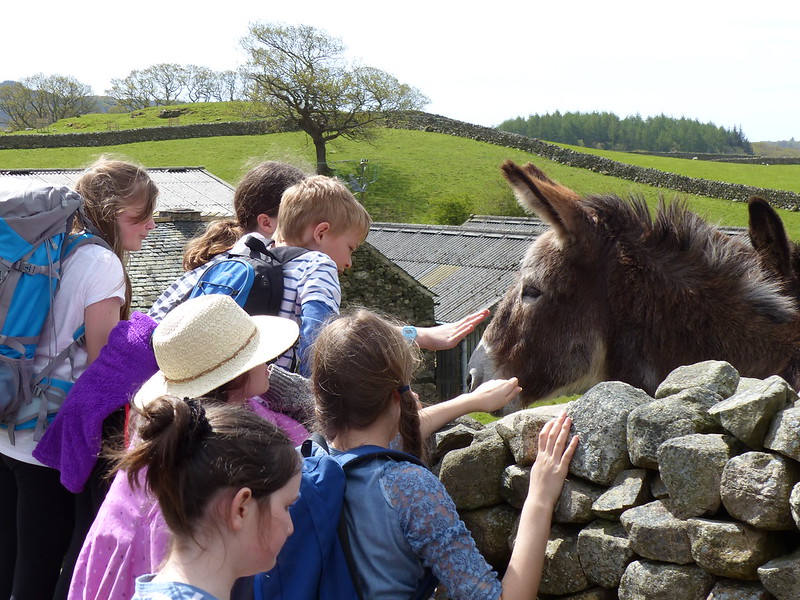 Then a short, sharp climb brought us to a superb little spot for lunch…. 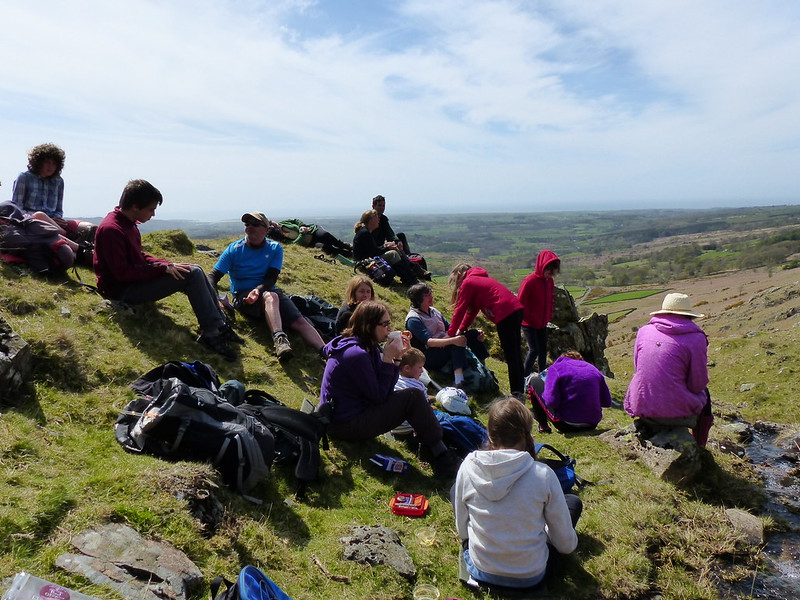 Our provisions stretched to a rather fine little picnic complete with fresh tea with the aid of the pocket rocket stove I’ve treated myself to. 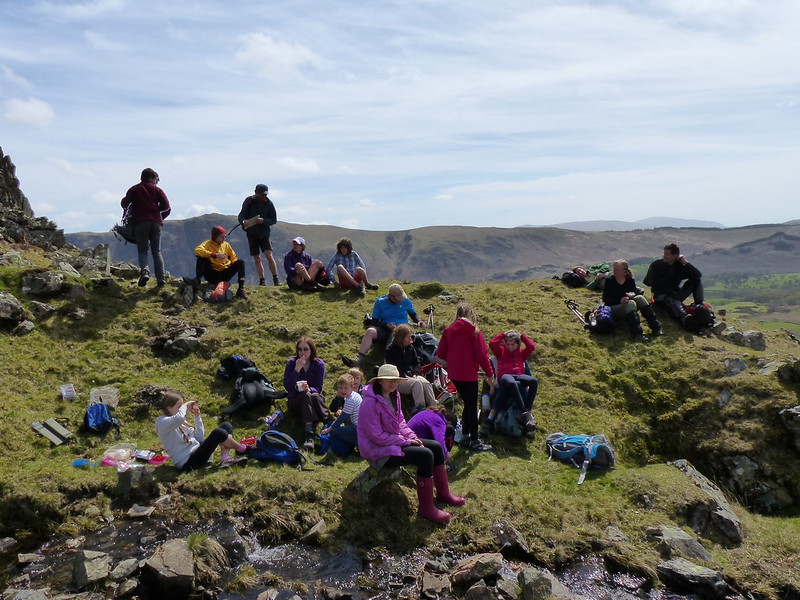 I was pretty happy sitting in the sun enjoying a brew, but apparently it was time to move on.

Still, moving on wasn’t bad either…. 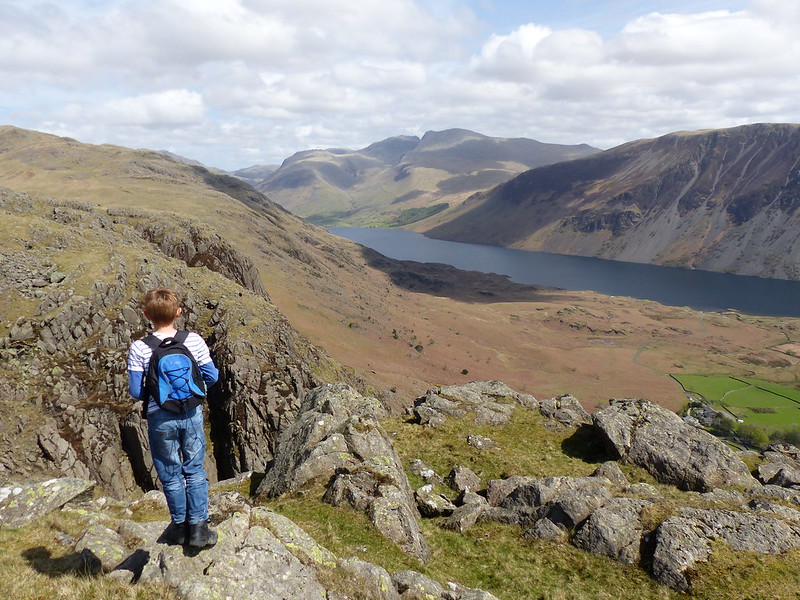 From the top of the crags here it a pleasant knolly ramble around to the top of Buckbarrow. Little S was, as usual, doing his best to test Andy’s cardiac health by selecting routes which would take him into exposed positions on vertiginous crags. I think all the kids appreciated the opportunity to chose their own route (with some guidance in the case of Little S!), picking out easy bits of scrambling to string together. 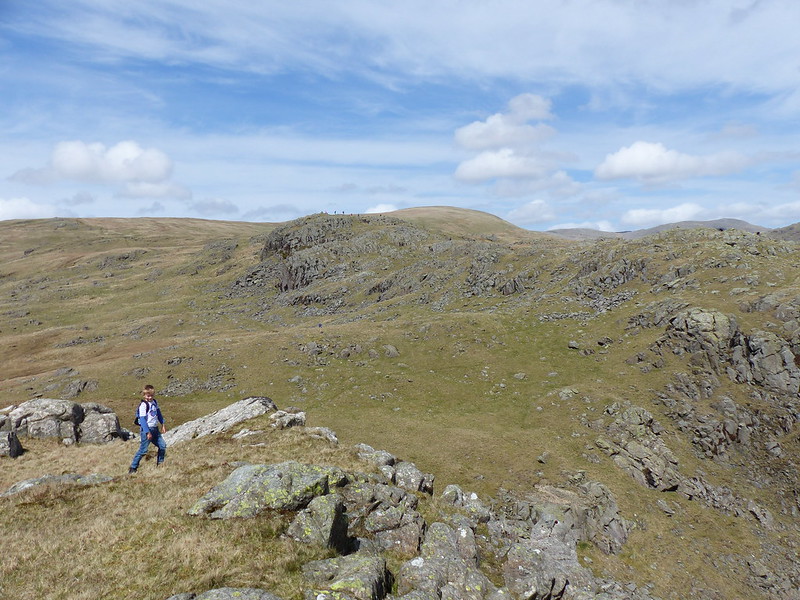 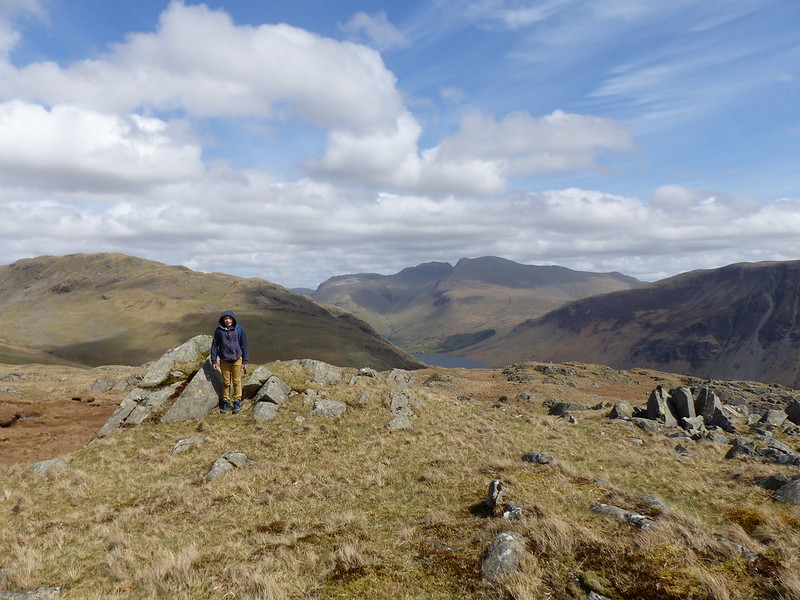 Then, just beyond the summit… 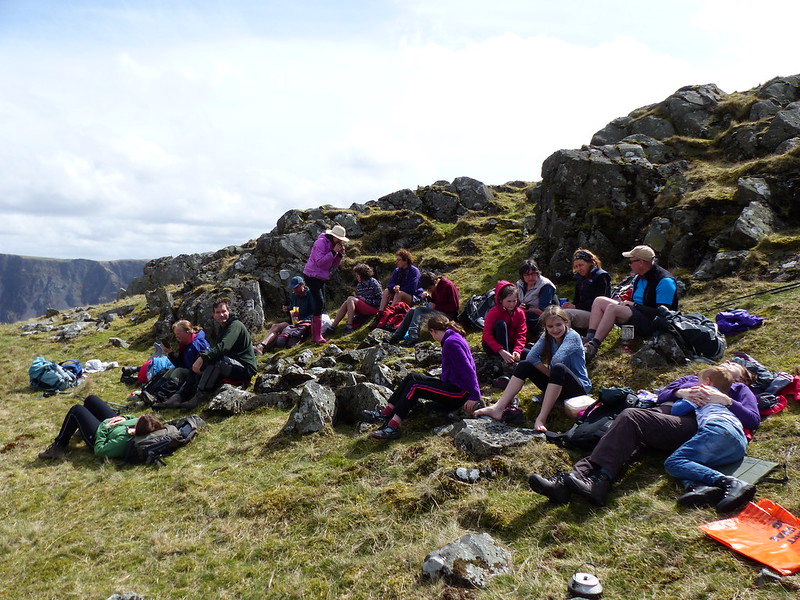 …another sheltered spot for second lunch, brews, sunbathing, a snooze, a natter etc.

The boys rarely keep still for long, but stashed at the bottom of my pack, for just such eventualities, I keep…. 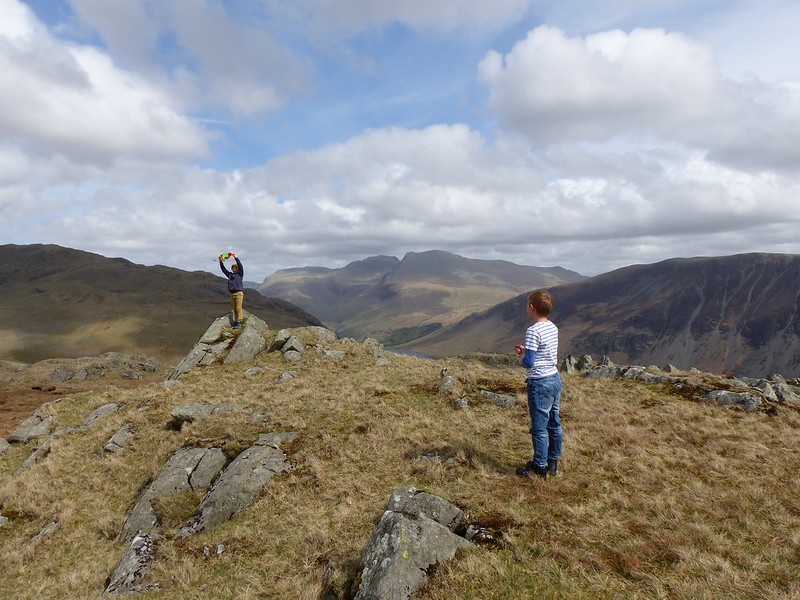 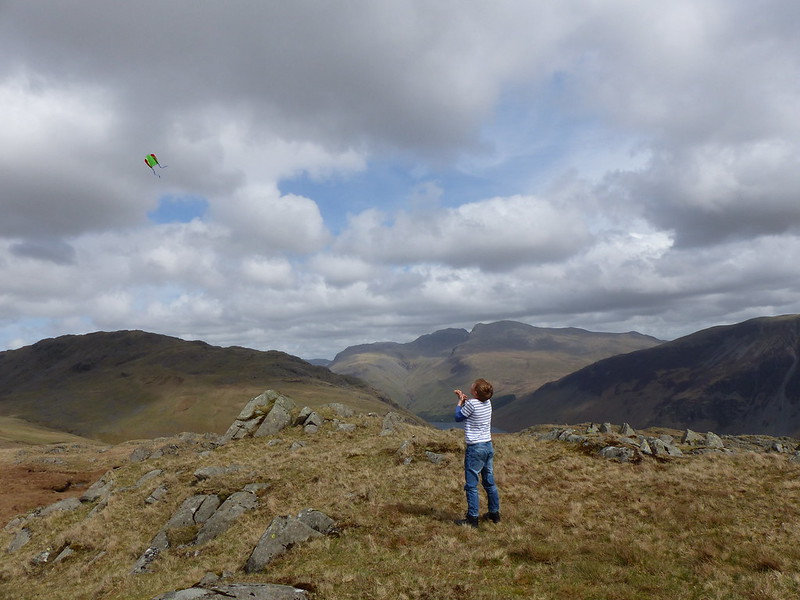 It folds smaller than a small handkerchief and weighs next to nothing, and it kept all three of us amused for quite some time.

Sadly, all good things have to come to an end, and with time marching on, we needed to get back to the campsite to pack-up and take our tents down. (The good people of the inestimable Church Stile campsite having allowed us to leave our tents in situ to dry after the Atlantic Storms of the night before.) 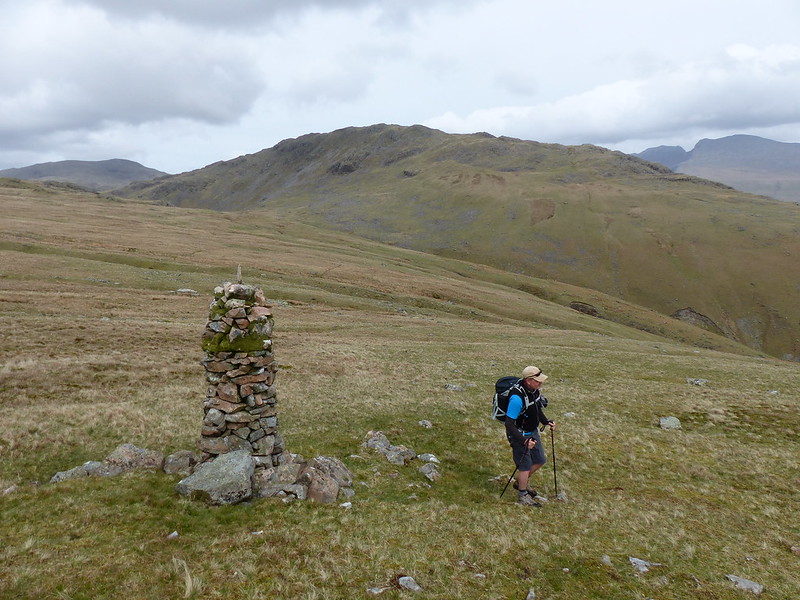 We split for the descent, with one party heading off in a hurry, down a steep direct route to get the inevitable mass football match started, whilst the rest of us took a more circumspect route which detoured down into Greendale Gill again, via this large, lonely and very tidy cairn. 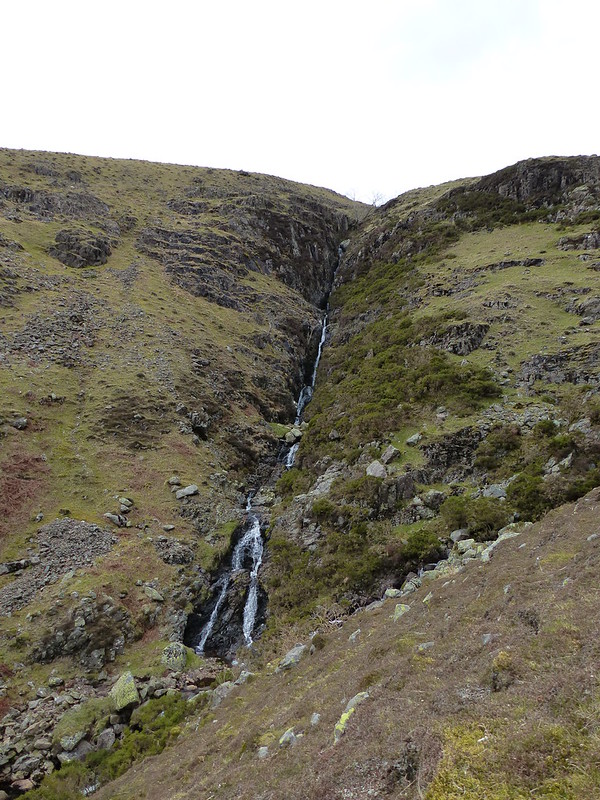 One of the Tongue Gills again. 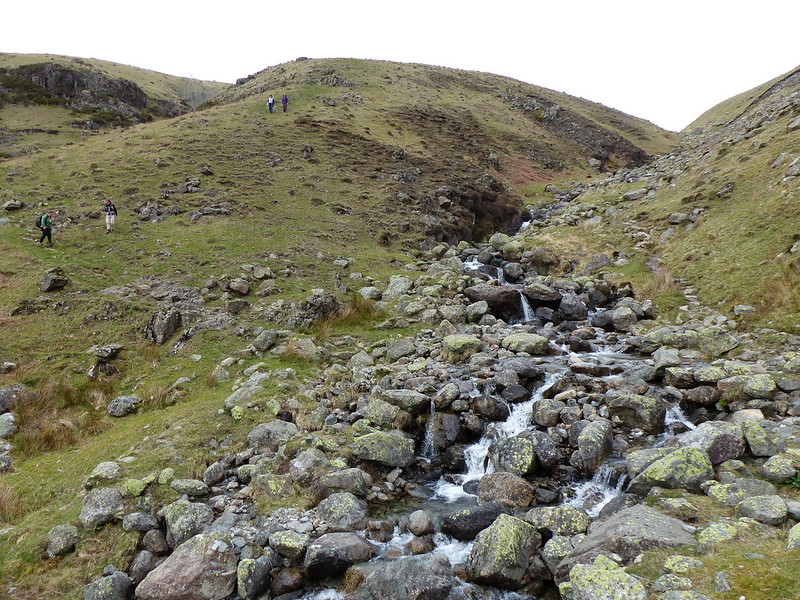 The first part of our route back through the woods to Nether Wasdale was accompanied by a stunning profusion of wildflowers. The primroses were the most impressive, but sadly my photos really don’t do them justice at all. 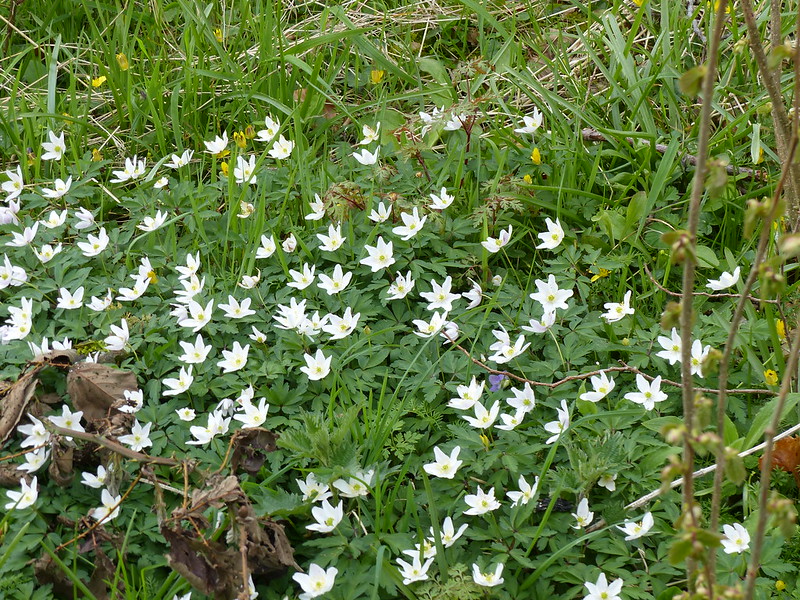 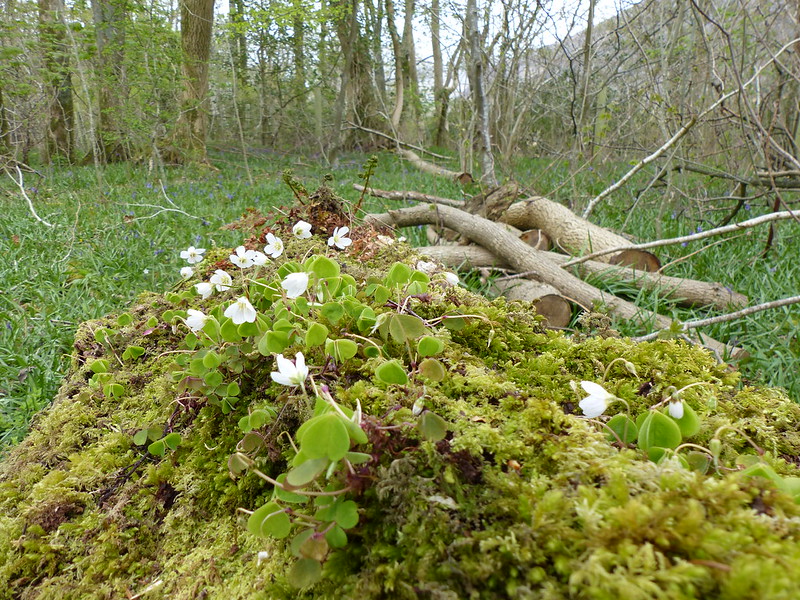 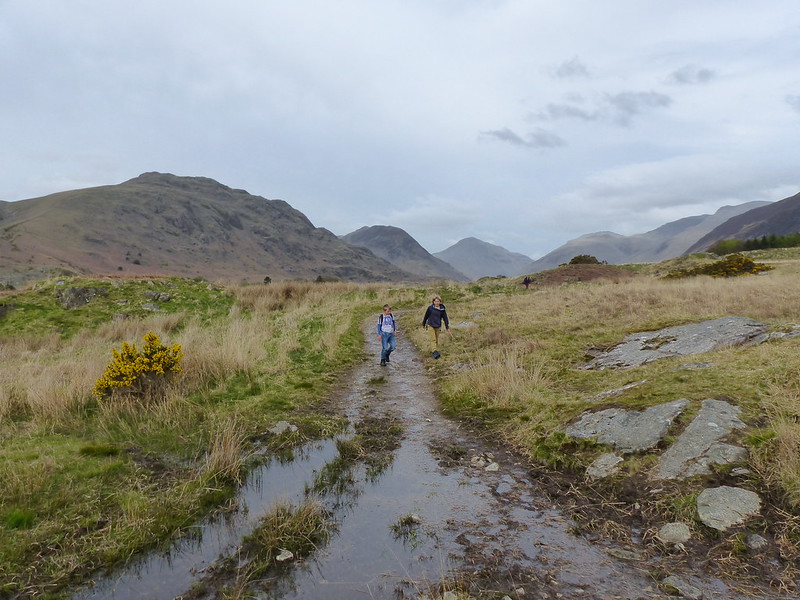 The mass football match was in full swing when we arrived back. Sadly, for all concerned, it was to be deprived of it’s most cultured right-boot because I had to take the trailer tent down. There was one more treat in store however – a meal in the Strands Hotel before we all departed for our disparate homes. A brilliant weekend – roll on next year.

You can read Andy’s parallel account of the weekend here.

Keen followers of this blog will have been aware that my posts about our trip to Towyn Farm this year could not yet be complete, since every visit inevitably includes a walk up Carn Fadryn. This year was no different. Once again we chose a splendidly sunny afternoon and as usual had the hill to ourselves. It sits in splendid isolation and gives terrific views of the peninsula and to the hills and coast of Snowdonia.

The kids all romped to the top at great speed. I was distracted, as ever, by various interesting bits and bobs: a lizard skittered across the path in front of me, a huge orange moth also eluded my camera. I did manage to catch this…

…gatekeeper, a butterfly which we don’t see at home in Lancashire

On the summit we were royally entertained by two painted ladies…

..butterflies that is, of course. Summer visitors like ourselves. I’d recently been reading (in ‘The Butterfly Isles’) about their remarkable migration north from the mountains of Morocco. A new generation goes from egg to butterfly in just one month, and then they are on the move again. Two of their close cousins, red admirals, were flying with them, or perhaps I should say sparring with them. It was hard to tell which was the aggressor but I believe I’m right in saying that painted ladies are very pugnacious. Certainly one of the red admirals was extremely tatty with great rents in its wings.

This moth was up and about near to the summit too. I think that it’s a ‘northern spinach’, which is found on heaths and moors and feeds on bilberry which was abundant hereabouts. I have no idea why it’s called a ‘spinach’. As to the ‘northern’ part of its moniker, looking at the distribution map it lives everywhere but the south-east – which seems to be the BBC’s definition of ‘the north’.

We tried a little aviation of our own, using a pocket kite I often carry, with surprisingly poor results given how windy it was – perhaps there was just too much turbulence. We had to settle for sunbathing, admiring the view, snacking on bilberries and trying to ignore the precarious situations our boys got themselves into clambering on the rocks. Oh – and on the trig pillar:

The boys and our pal E. ‘I climbed up all on my own Dad.’