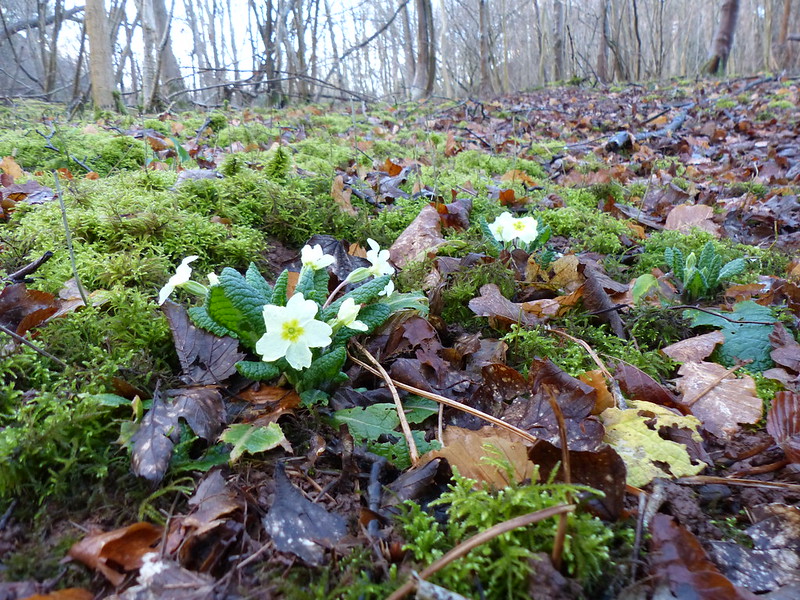 The clocks go forward the clocks go back: a flurry of posts and momentarily I’m almost up to date, but then, wham – all of a sudden I’m miles behind again. How did that happen? It’s not all bad – partly it’s because I’ve been managing to get out quite a bit, even if only for a few snatched moments here and there. So – lots of catching up to do and how am I going to begin? With a digression of course!

Library – a building or room containing collections of books, periodicals, and sometimes films and recorded music for use or borrowing by the public or the members of an institution

(You knew that obviously, I seemed to have strayed into the beginning of a round from The Unbelievable Truth there.)

A while back, I took the kids to the village library – which is small but perfectly formed, as they say – so that they could return some books. Now I don’t often use the library these days, or the larger library in Lancaster either. I have a bit of a second-hand book buying habit, to the point where the house is slowly silting-up with the accumulated piles of as-yet-unread, but never-the-less highly desirable old books I’ve smuggled in. But whilst I was at the library I thought to check the non-fiction shelf for a recently published book about the history of Leighton Moss I’ve been wanting to read. Rather surprisingly, it wasn’t there. But what I did find…. 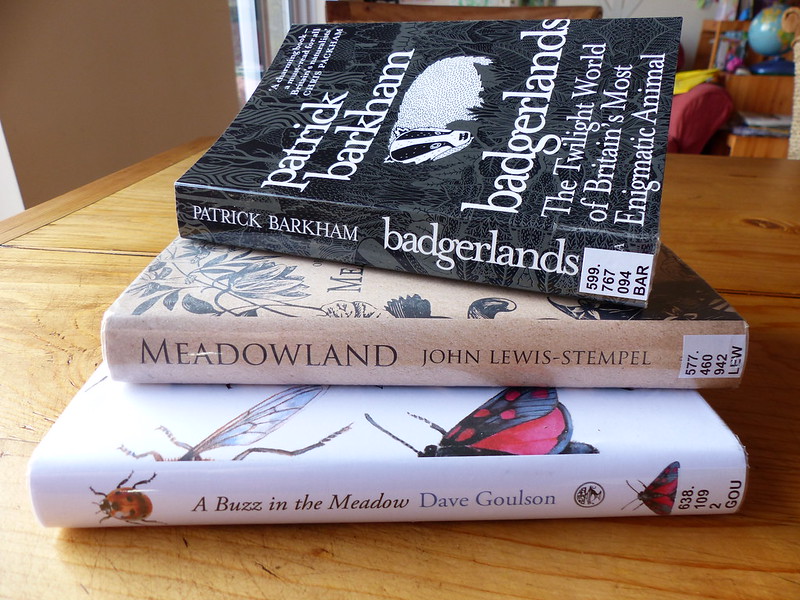 …encouraged me to rediscover the library habit.

Once upon a time, the local library was pretty much the centre of my universe. It wasn’t the same village library – this was on Paget Street in Kibworth, where I grew up. A slightly bigger library in a slightly bigger village. We visited often, and I can remember the layout well. One end of the building was dedicated to children’s books. I can even remember reading Where The Wild Things Are there, although it was the terrific pictures of the wild things which stuck with me rather than any details of the story. I also vividly recall getting my own library tickets and being trusted to walk the half-mile into the village on my own to choose books. And then greedily devouring those books and taking them back almost immediately after borrowing them. I often read surreptitiously into the night, long after I was supposed to be asleep. Later, I can remember deciding that I had outgrown the children’s section and making what felt like a huge journey across to the other side of the room to try the books for grown-ups.

Anyway, talking of books for grown-ups, here’s a recommendation: the first of the library books I read was ‘A Buzz in the Meadow’ by Dave Goulson. I’ve been on the look out for his ‘A Sting in the Tale’ since, Emily reviewed it on her Adventures in Beeland blog. If you believe the blurb on ‘A Buzz in the Meadow’, it’s about a meadow in France that Goulson owns and the insects which live there. But that’s very far from all of the story. The meadow and farm house which he bought form a convenient frame for a whole load of other stuff. 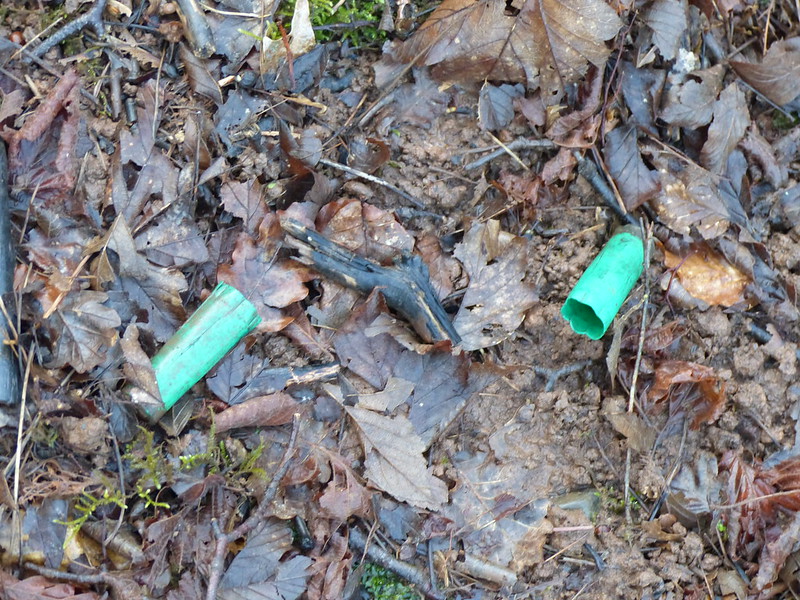 Not unlike the way in which I’m going to attempt to string a series of digressions around these pictures from a post-work walk. It was a fairly digressive walk in itself: I was tempted away from the main path around Haweswater by primroses, up a narrow trod which climbs through what I think an Orienteer might class as a slight reentrant. Because the boys and I have previously found badger trails in this area, I’ve often assumed that this path is another of those, but the shotgun casings, oddly out-of-place in a National Nature Reserve, had me reconsidering. The woods are wonderfully unkempt hereabouts, with fallen branches and fungi-decked trunks on every side. 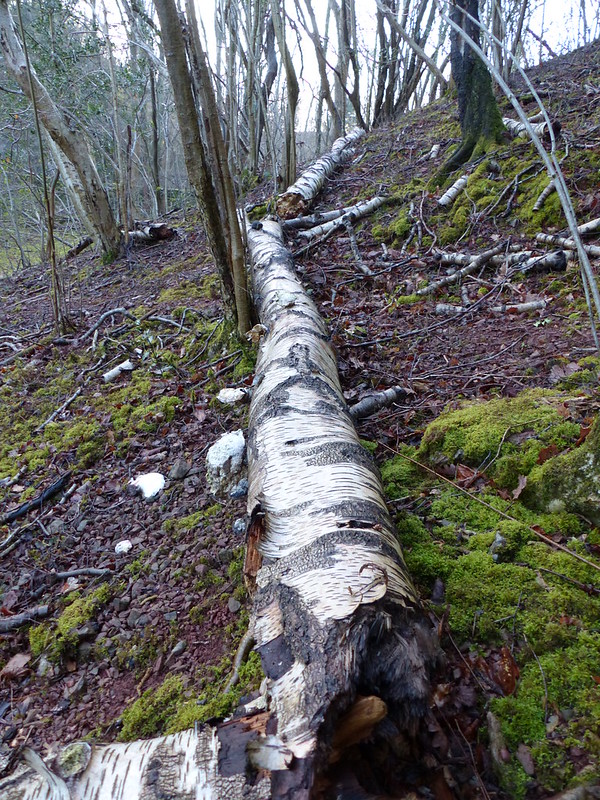 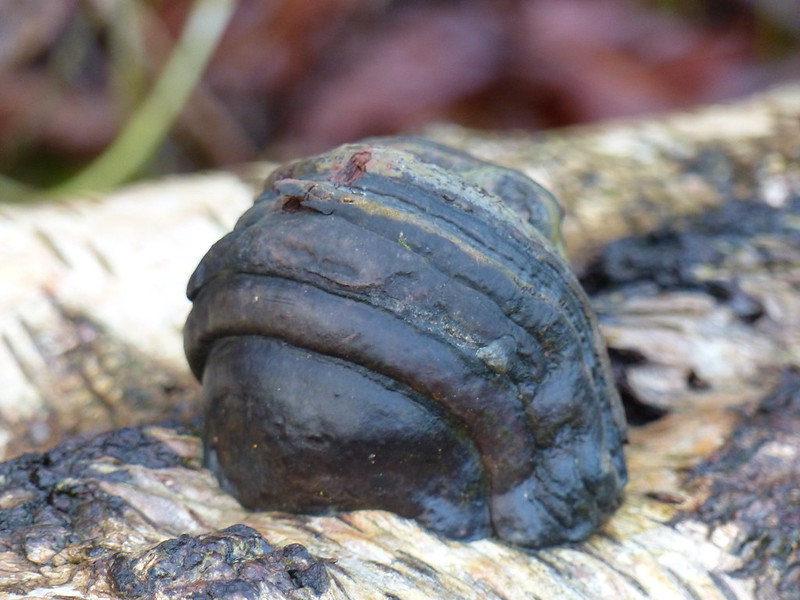 And some curious odds and ends of human detritus lying about too.. 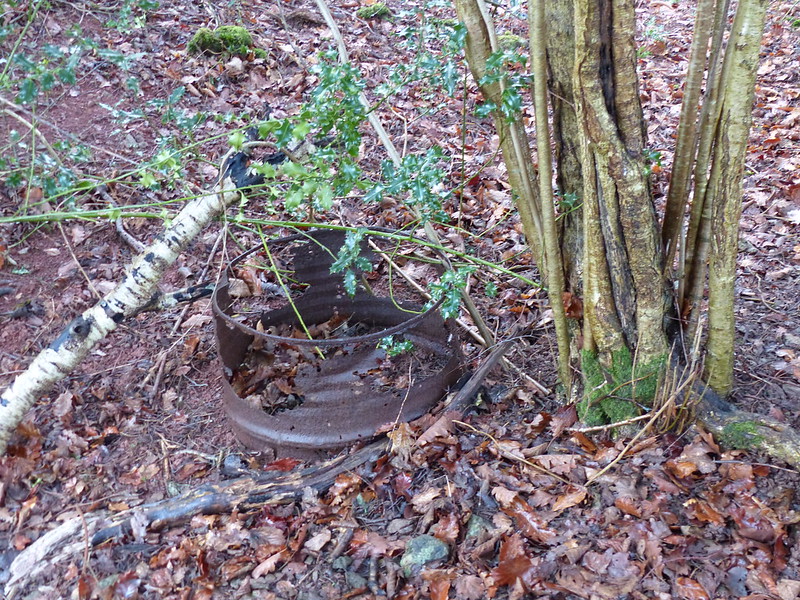 I followed a very faint path, losing it and then regaining it from time to time. This is it… 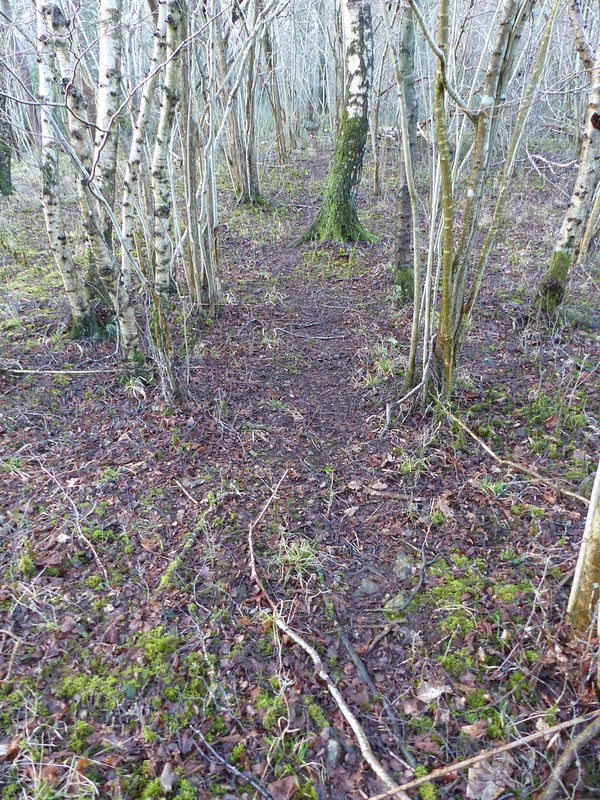 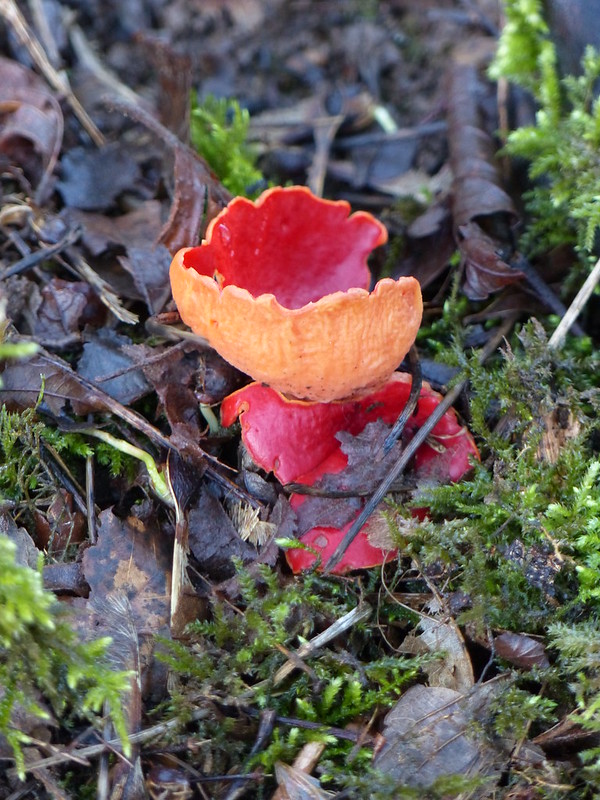 Their parabolic surfaces, as vivid as a guardsman’s regimental tunic, focus the feeble heat of the winter sun on thousands of minute, flask-shaped sporangia embedded in their surface, which respond by discharging a silent fusillade of invisible spores.

from The Guardian Country Diary

‘A Buzz in the Meadow’ has a section about the way that some flowers can generate heat. Parts of cuckoo pint flowers can feel quite warm to the touch apparently, a fact that I look forward to checking soon. In fact the book is full of really surprising and fascinating facts about the kinds of flora and fauna you might easily overlook. 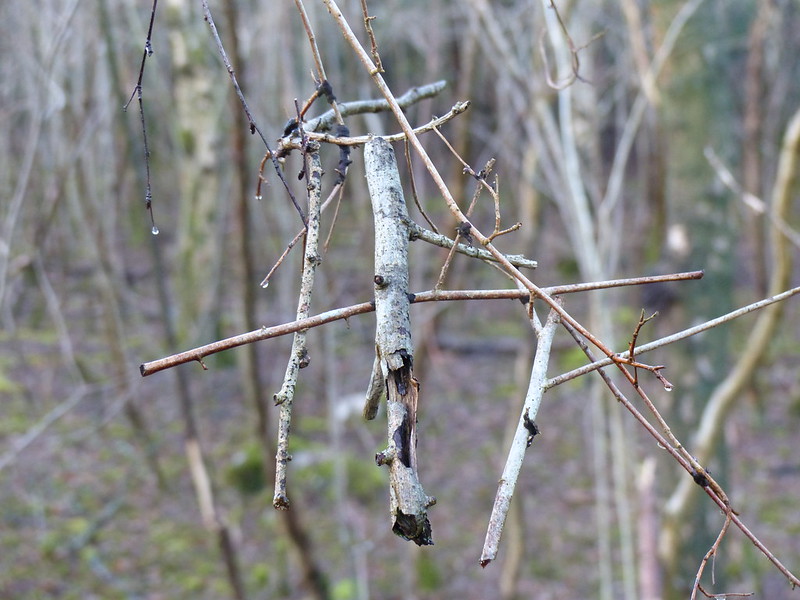 Found sculpture: a tangle of twigs – some fallen, some live – suspended like a natural mobile.

In a second section, Goulson moves on to the web of interconnections, not all of them perfectly understood, between the many denizens of his land. 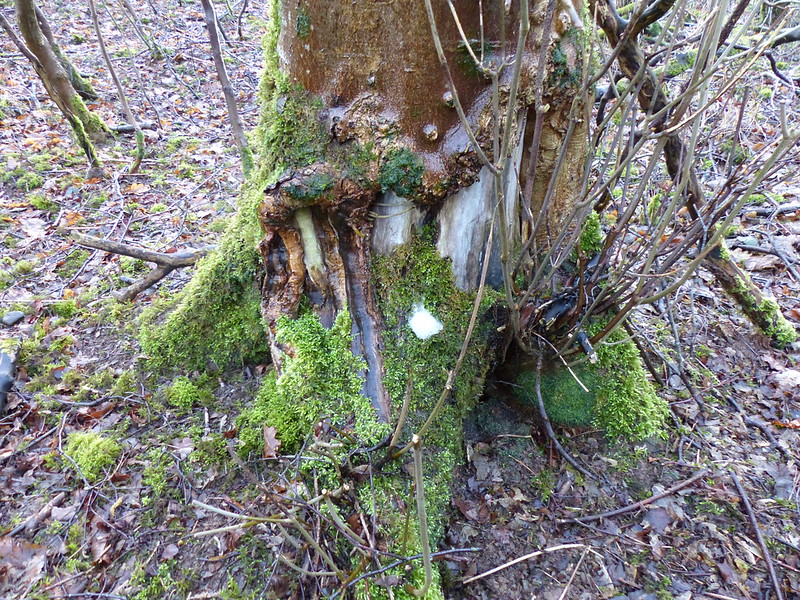 A query: at the base of tree – some….foam? What could have caused it? 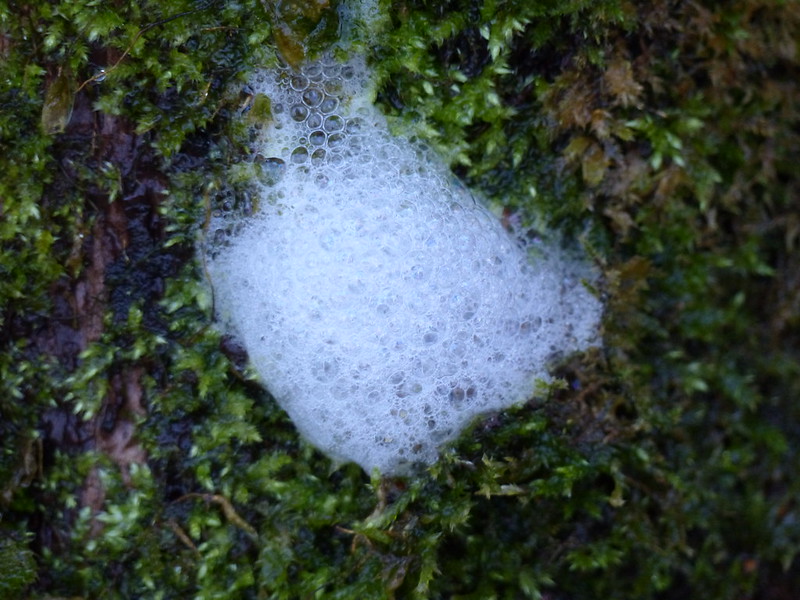 I was still clinging to the notion that I might be following a badger highway. But there was a high deer fence around an area of coppicing to my left. And bird-boxes liberally distributed around this part of the wood… 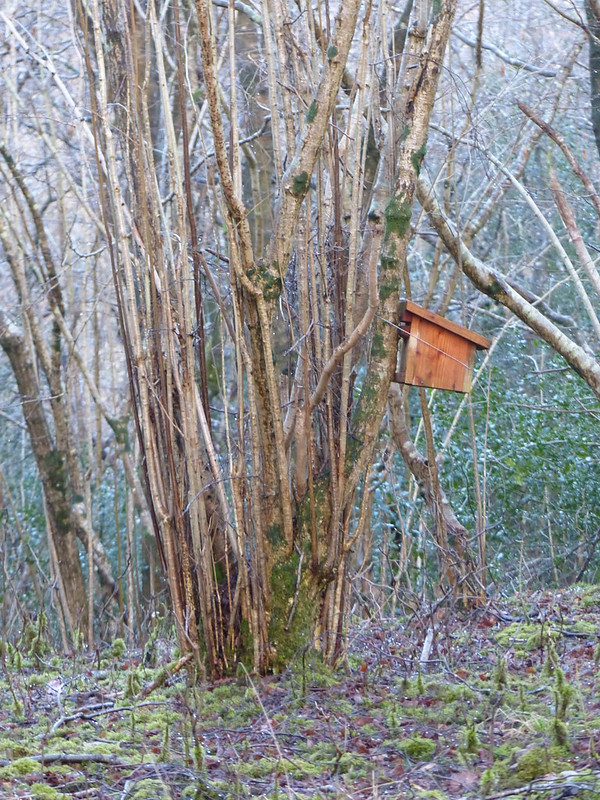 So I was probably deluding myself. But then we’re good at that aren’t we? The last section of Goulson’s book is about the alarming rate at which the world is losing entire species: how we’ve almost entirely eradicated megafauna, how new pesticides are are scandalously harming our bees….. 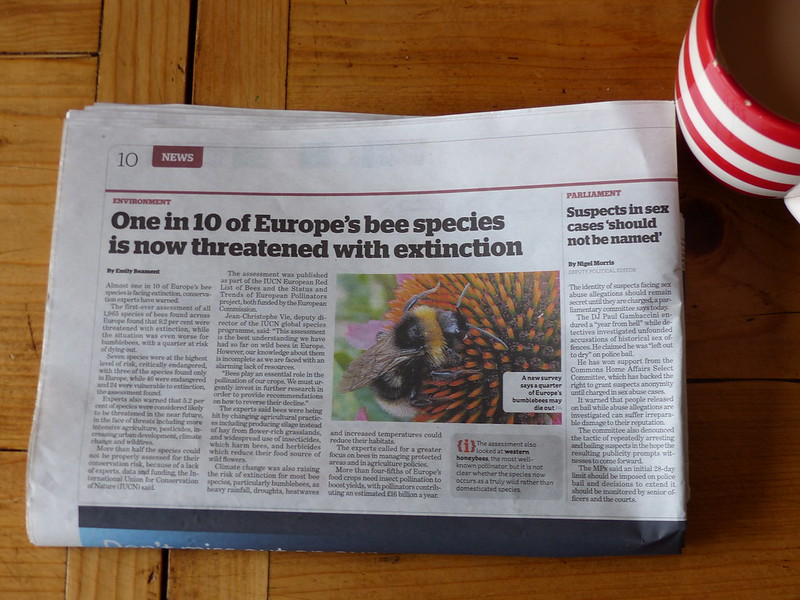 According to last Friday’s paper 10 percent of European bee species are threatened, but it’s worse for bumble bees, with the figure rising to 25 percent. In China bees are already so scarce that children are employed in orchards to climb the trees and pollinate blossoms using brushes. We’re depressingly adept at thinking of ourselves as somehow apart from nature; that the natural world is either something to be exploited or something to be managed and preserved. But we are part of those webs of interconnectedness, whether we acknowledge that fact or not and it must be in our own self-interest to modify our behaviour before it’s too late. 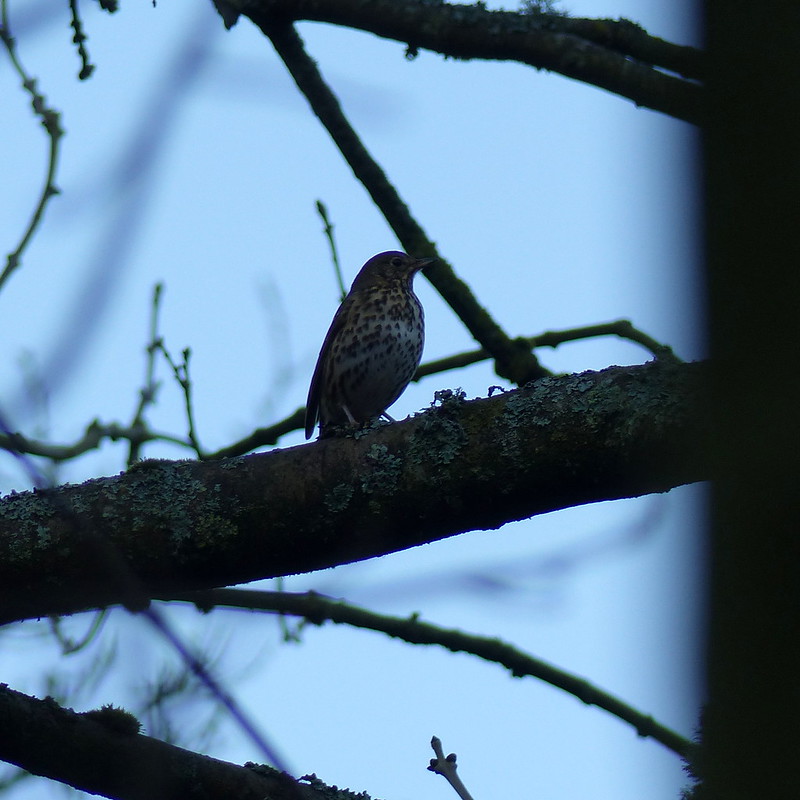 It was getting quite late on my walk and a bit gloomy in the woods. I’ve been enjoying the way the birdsong is gradually swelling, with more birds adding their voices each week. The song thrushes are very vocal in the evenings at present. I was impressed with the way the camera caught this one, despite the low light and the tangle of surrounding branches.

But then equally frustrated by my inability to get it to focus properly on the small nubs appearing at the base of this tree, as they do every year. 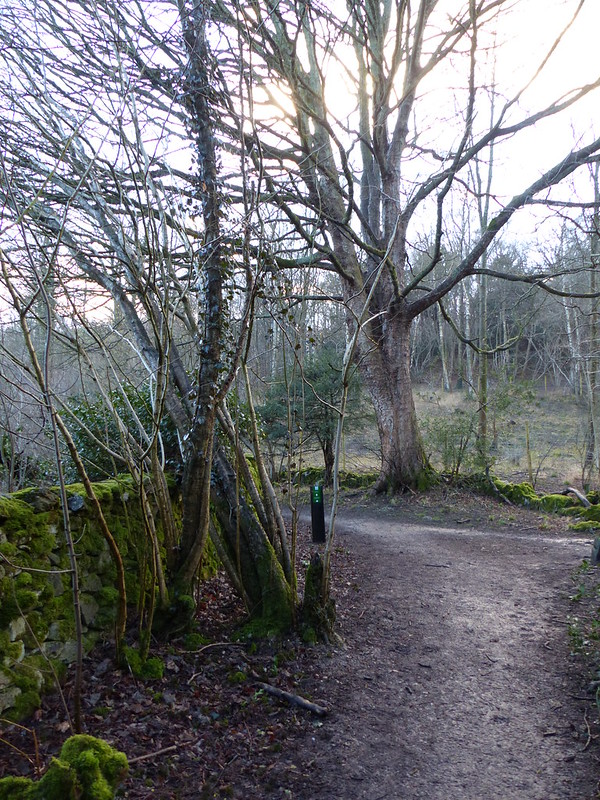 They were the emerging spears of another spring curiosity – toothwort – a parasitic flower without leaves, which gathers nourishment from the roots of the tree below. 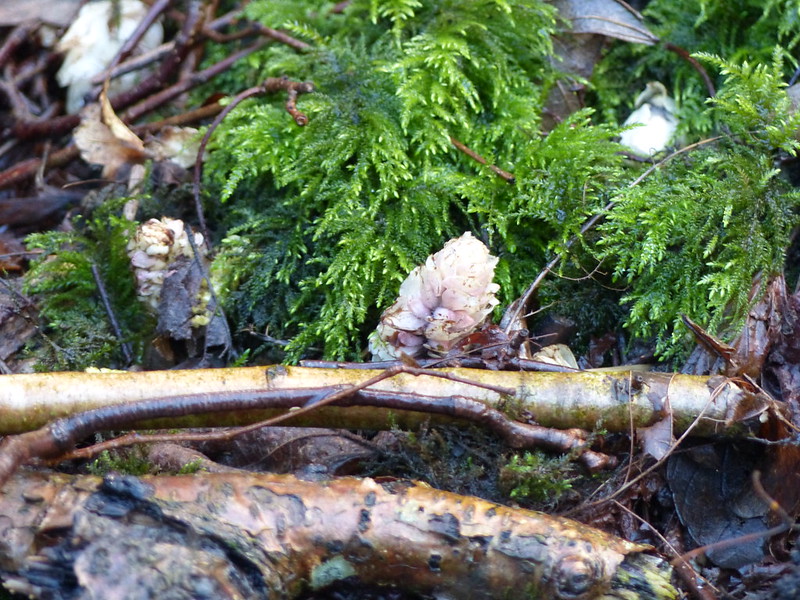 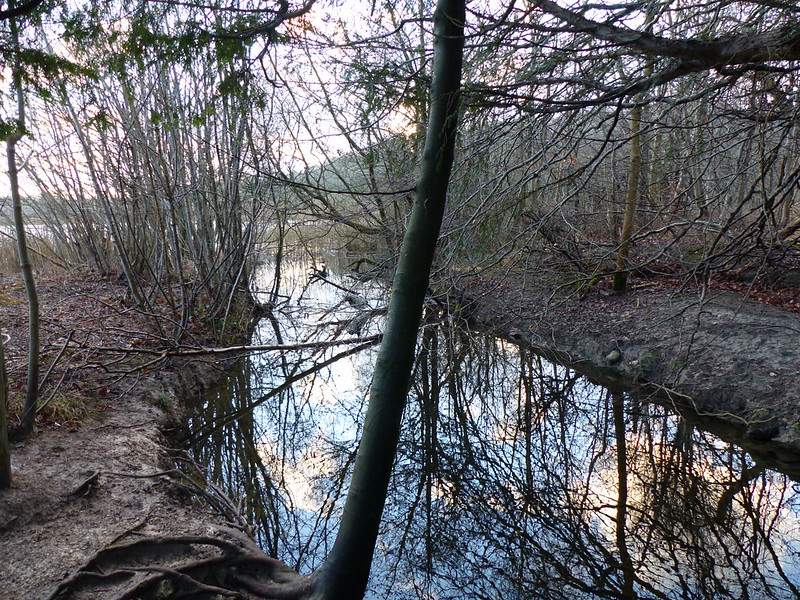 I finished my wander with a view of Haweswater and back to the car. 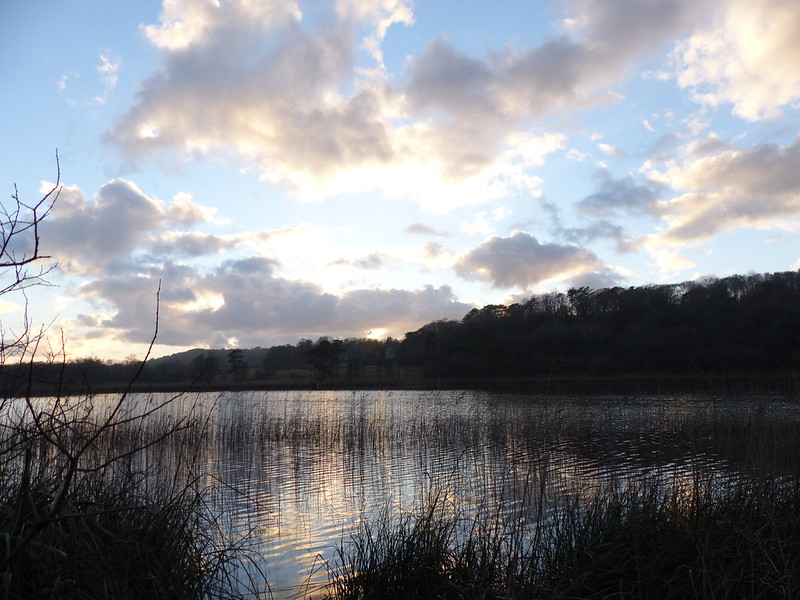 There used to be a path across this meadow…. 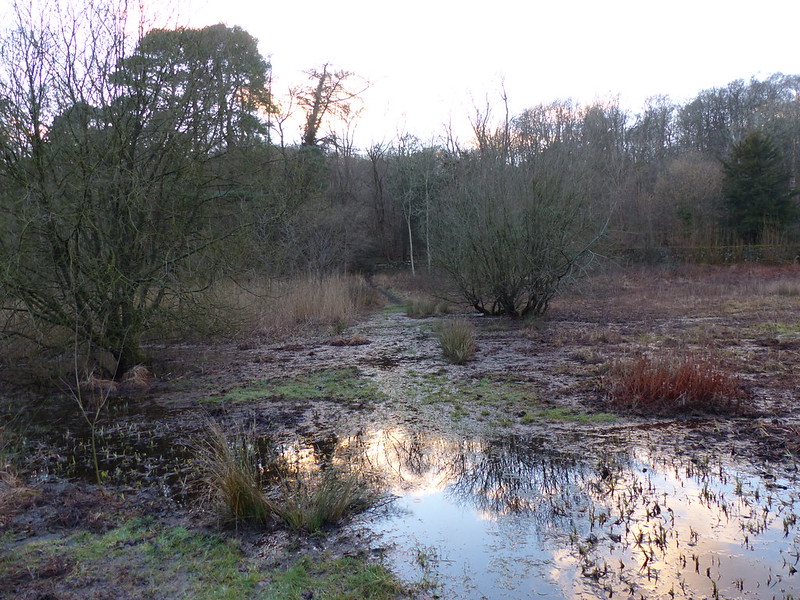 …but something has changed and now it doesn’t drain as it did, and even in wellies I found I had to go around.

I should at this point have gone home for my tea, since I was needed quite soon for a football-training-taxi-run. But I decided I just about had time to catch the sunset over The Bay… 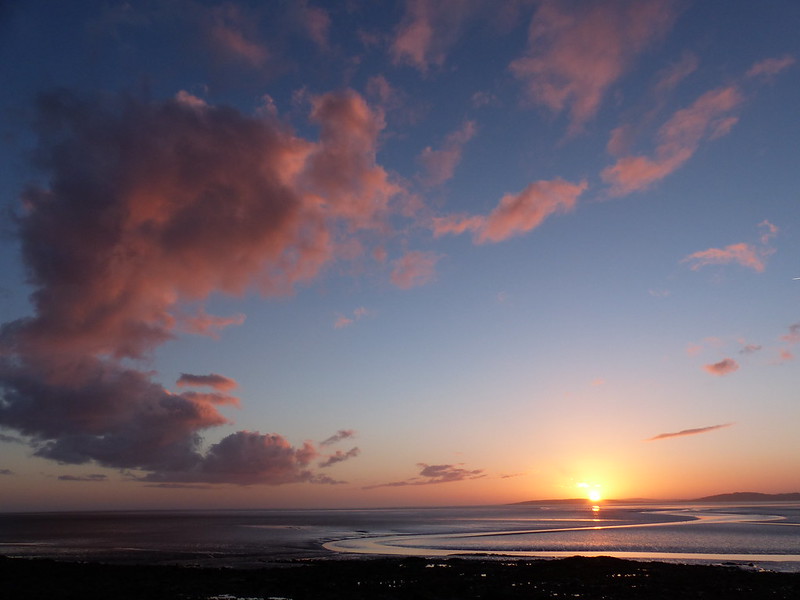 Meanwhile my Mum tells me that the library in her village is scheduled to shut soon. Not an uncommon occurrence I know, in these straitened times. But this is a particularly crazy plan, since this library has hardly been there for long, a brand-spanking new facility was only recently built. Now it will shut. 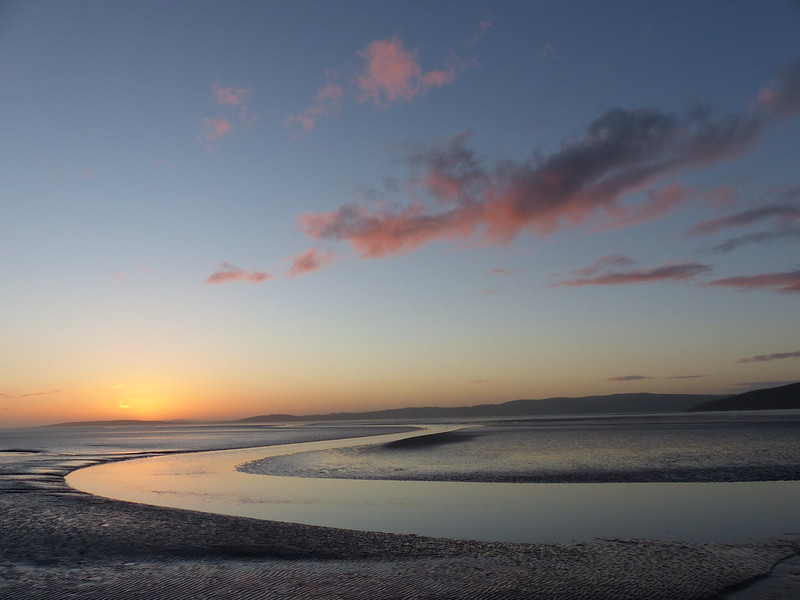 I hope we won’t wait to find that miss what we had when it’s gone.

Where The Wild Things Were.