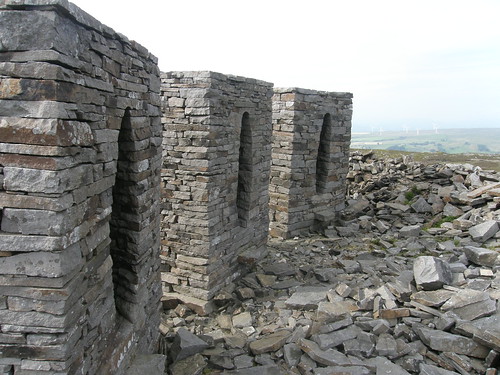 When I was up on Clougha last year with my friend Tony, we passed close by these three regular stone constructions and I wondered what they were (but not enough to walk over and take a look). Back at home, a bit of searching revealed that they are in fact an Andy Goldsworthy Sculpture and I resolved to come back at some point to have a proper look. 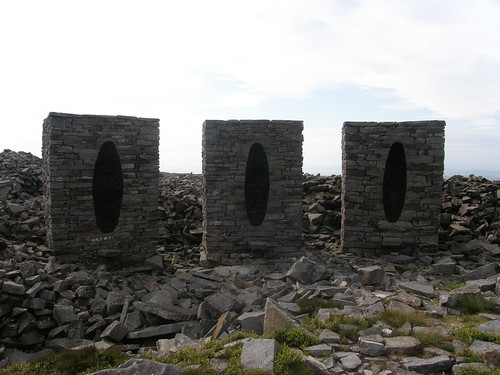 Another pleasant day frittered away at work had clouded over slightly now that I was free to enjoy it. The the wind had picked-up too. Through the walk, the hills of the Dales and the Lakes would disappear from view behind some sullen black clouds, and when I a was just a few hundred yards short of getting back to the car, a little light rain fell. 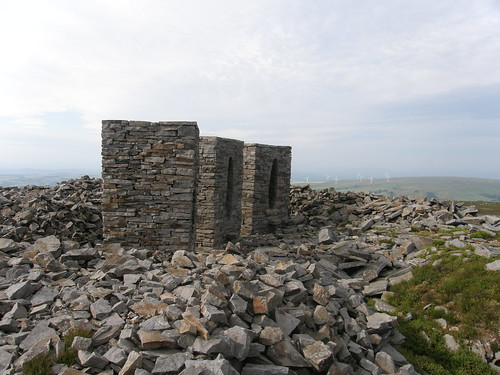 But I’m getting ahead of myself. I’d parked in the car park off the Littledale Road, took the path past the sizable Skelbow Barn and then the permission path which follows Sweet Beck and leads to the intake wall and access land. The OS map shows one of those hesitant black dotted lines which indicate a path rather then a right-of-way. I’d tried to find the top of the same path last year, but missed it. It turned out to be a nice route up the hill – a small path following a line of grouse shooter’s butts. (They’re simply ‘Grouse Butts’ on the map of course, but that’s pretty useless as a name – makes it sound like they might be somewhere for the Grouse to live, or possibly to hide whilst they take pot shots at startled tweedy types.) 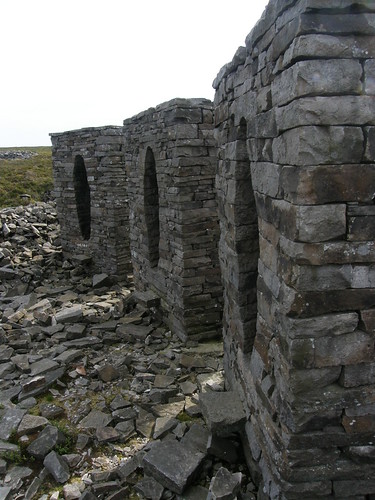 I was impressed with the sculptures. Nice to think that they were paid for by the Duke of Westminster who, in the past, has so jealously guarded his privacy on this land, and that the Right to Roam legislation makes it available to us all. 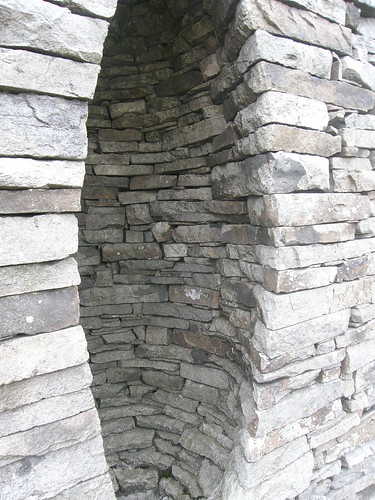 …in each sculpture there’s a sturdy step. Rather inviting I thought, so I stepped into one of them. I know, I know, I’m a Big Kid at heart. 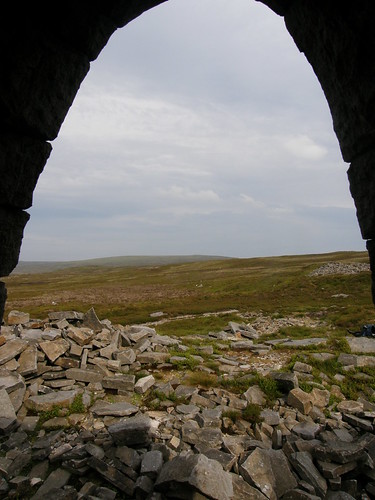 I think our kids would appreciate this – another walk I shall have to share with them, maybe when there’s some snow on the fells. 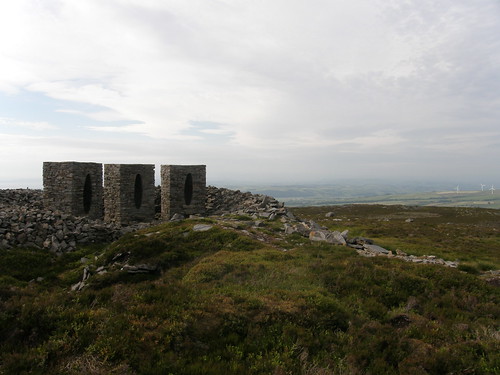 The sculptures sit in an area of spoil heaps from former quarrying, some of which are so regular that I wondered if there had been buildings here at one time too. 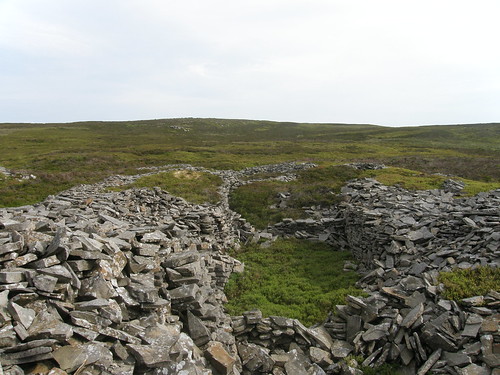 There’s a small circular enclosure which I sheltered behind to enjoy the view and take a drink and a snack. 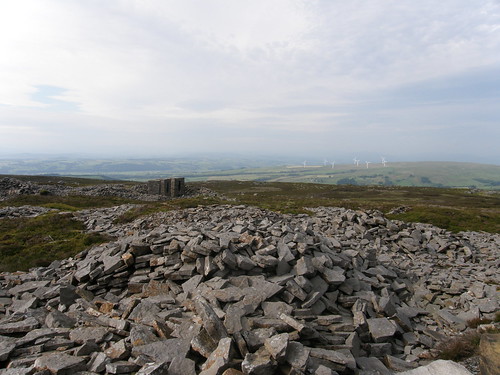 I continued up on to Grit Fell and contemplated heading on to Ward’s Stone, the highest point in the Bowland Fells, but after finishing virtually in the dark last year when doing that, I decided against it this time. 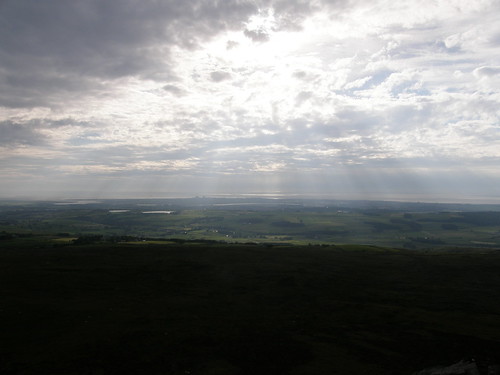 So I ambled down to Clougha Pike ‘summit’ and found a sheltered spot amongst the rocks of the edge there for another drink and snack and contemplative pause. The fast moving clouds were providing a bit of a light show – crepuscular rays sweeping silvery patterns across Morecambe Bay, or picking out the Lune as it snakes through Lancaster, or Langthwaite and Blea Tarn reservoirs on the south-western edge of the city. 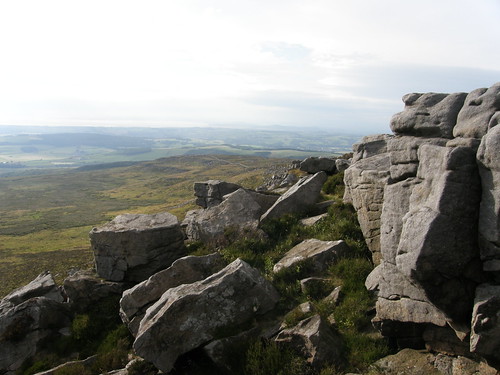 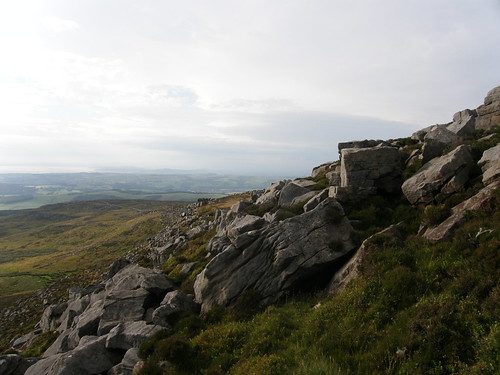 I returned by the large bulldozed track which drops down to the Littledale Road, but then skirted the top edge of Cragg Wood to rejoin my outward route. It had been a great walk for birds, nothing too unusual, but lots of them. From Cragg Wood I saw surprisingly large flocks of wood pigeon – it seemed almost exotic, from my elevated position, to see so many flying above the tree-canopy, like something from a wildlife programme about distant jungles.

Having spotted a nicely patterned feather on the path early in the walk, I’d kept my eyes peeled and had managed to gather a fine collection, including one of around two feet in length with beautiful bands of colour.

Out on my own for a post-work walk.

Across the peat and gritstone moorland of Clougha Pike on the edge of the Forest of Bowland. Overhead an everchanging sky. Underfoot springy heather and bilberry. (I shall have to return when they are purple with flower and loaded with berries respectively.)

The views over the Bay, and of the sinuous curves of the Lune where magnificent. So where the views of the Lakeland fells.

Nearby on Caton Moor the wind turbines where stately in their slow rotation.

I have colleagues who were prominent in the successful campaign to prevent an extension of this wind farm, but if I’m honest, I like them. I know that many people feel that they are a blot on the landscape, but I think that it’s important to remember that our landscape has been very much shaped by man. The moors themselves only look this way because they are managed for grouse. I crossed several areas today where the heather had been burned, or where the regeneration process had begun and the tough old heather had been superceded by short tender new plants. The rattle of grouse calls was my constant companion on this walk. At one point I had three of them clacking at each other with me stuck in the middle. I was surprised by the vivid scarlet of their combs. I also often heard the weird burbling call of curlews. At one point whilst I was concentrating on where I was putting my feet a soft bass ronk ronk made me look up to catch the eye of a raven. He was following the edge, as I was, but his ascent was enviably effortless and he soon disappeared over the summit. A shiny black millipede narrowly avoided being crushed under one of my clodhoppers. Watching it crawl across the peat was fascinating. It’s tiny legs came together in a series of triangles which then seemed to flow along its length.

Ingleborough’s dark shape is recognisable from any direction. I don’t envy the Brigantes in their hill-fort on the top.

I had some sandwiches in my rucksack for my tea and precious little else. Not for example, a hat and gloves, which would have been welcome as I ate the sandwiches sat amongst the gritstone boulders slightly below the trig point.

On my way down, I passed this squat tower. It evidently once had a door in it, but that has been ‘bricked-up’. I have no idea of its purpose, but the area around it is a jumble of rocks, half-built walls and shelters. I suspect that some form of quarrying or mining has been carried out here.

Finally – is this mackerel sky?