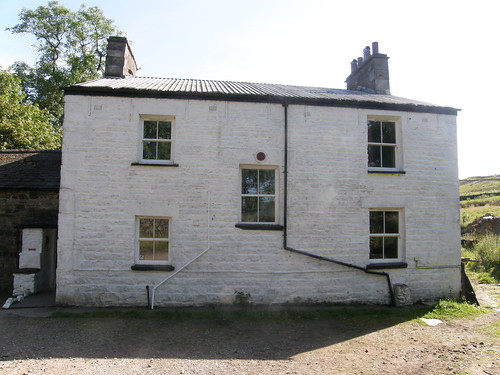 This is Bullpot Farm, actually no longer a farm, but now the headquarters of The Red Rose Cave and Pothole Club. It’s the perfect spot for the club because it’s right by… 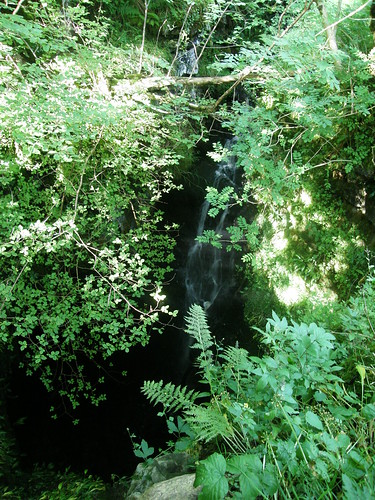 …Bull Pot, which is one of the many entrances, and exits I suppose, to and from the Three Counties System, Britain’s longest and arguably most complex cave system. There are several more potholes dotted around this area.

This was the last of my post-work evening strolls this summer – and from my point of view the best. The sun was shining again – it was hot in fact. 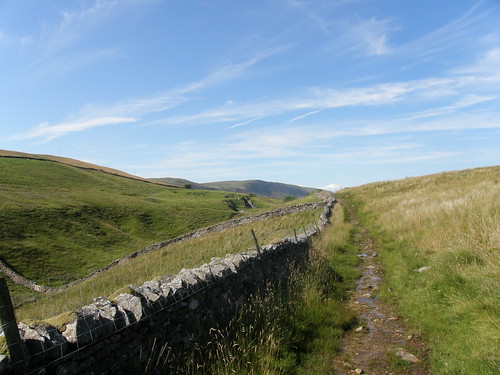 My plan is simply described – drop down to Ease Gill, follow the stream bed up, climb to the summits of Great Coum and Crag Hill and then take a more direct route back down to the Farm and my car.

At Bullpot farm I helloed a lady walking her dog. She was the last person I saw until I got back to my car around 5 hours later.

At 306m Bullpot farm gives a nice headstart to the climbing for a lazy hiker like me. Sadly, from there I had to head down to reach Ease Gill.

I’m not sure whether this… 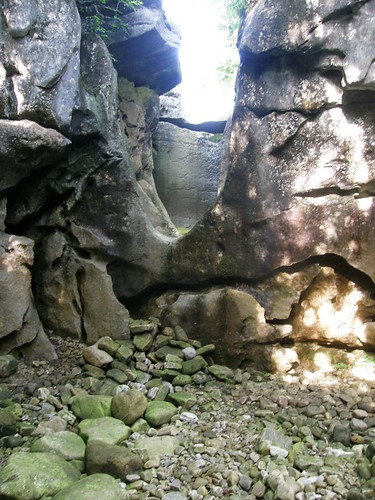 …is the feature named on the map as Ease Gill Kirk, or whether that’s a little further downstream. (I’ll take a look down that way next time!) You can see here an important feature of Ease Gill – it has no water in it, not in this section at least. There’s a small pile of boulders at the bottom of the fall facilitating it’s ascent by the bold and agile. I have climbed it in the past, but I seem to remember that I then couldn’t get up the next, higher section. This time I just went around.

It wasn’t just me that was enjoying the sunshine – this was to be a walk packed with wildlife encounters and in particular the butterflies were everywhere. I can’t think when I’ve seen such a diversity, there were whites and fritillaries on the wing, I saw skippers and one very dark butterfly which I couldn’t begin to identify. On several occasions I spent quite some time trying, mostly unsuccessfully, to photograph them. 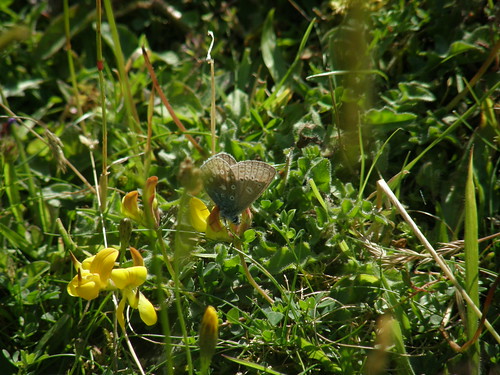 I think that this is a female common blue, but if she is, she must be very faded since both sexes generally have orange markings on the undersides of their wings.

A bird of prey hurtled past, swinging between the low trees above my on my right. I don’t know what it was, but thinking back, it had a pale, barred chest and was moving very fast, so it may have been a peregrine. Two buzzards, circling and calling ahead made me cringe a little. Even though they are so much more common than they once were I’m still always thrilled to see them, but I’m a bit more circumspect about their presence these days, after what happened a few summers ago.

In the lower reaches, Ease Gil is generally dry, although every now and again there were puddles and pools to catch and throw back the blue of the sky. 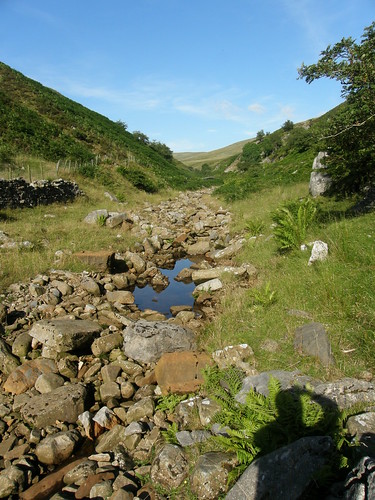 Somewhere near here I passed what I presumed to be a dig. A small drystone enclosure had been built around a hole covered by a battered pallet. The wall presumably to prevent the pothole flooding if and when the streambed has water in it. Further upstream I would see numerous small caves and resurgences, all part of the Three Counties System I imagine. 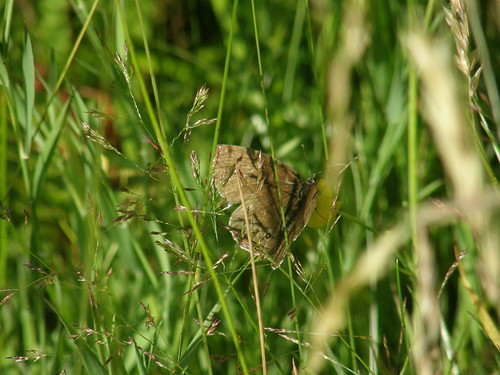 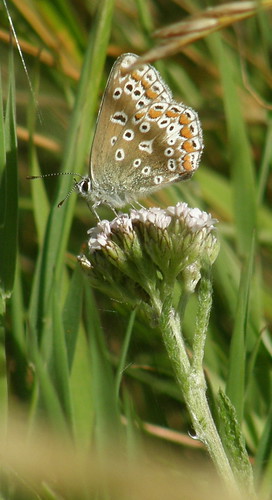 The dry streambed led me to a small limestone bluff, within which… 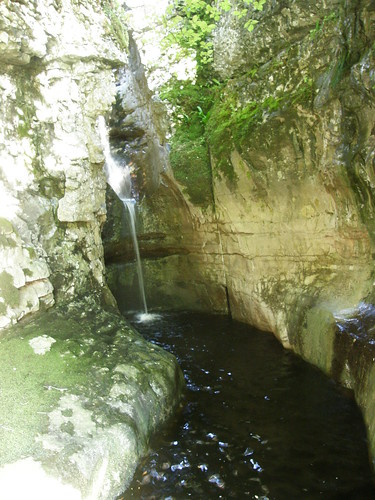 …a very enclosed passage with water in it! And an actual waterfall!

From this point on, the stream alternated between wet and dry. 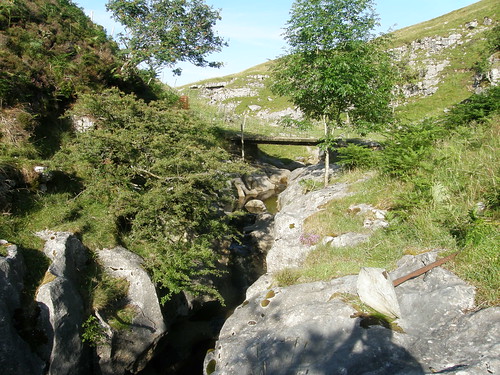 I saw several small frogs during the walk. 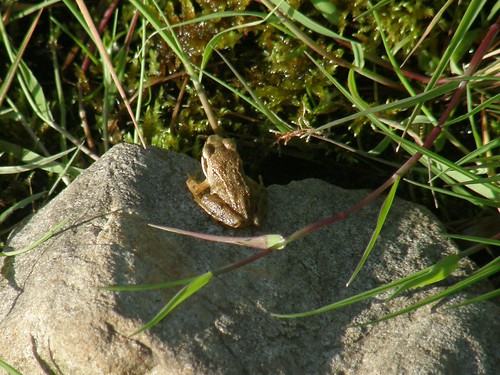 I had just snapped a couple of photos of this little fellow, on whom I had almost stood, I turned and almost stood on… 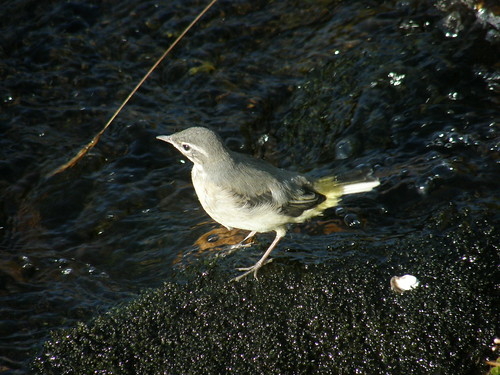 …a juvenile grey wagtail. A week before I’d spent maybe 15 minutes trying to photograph a pair of grey wagtails, but they were constantly on the move, too far away and in too much shade. This bird couldn’t have been more obliging. It sat in the sun practically between my feet. Hopped a few yards away… 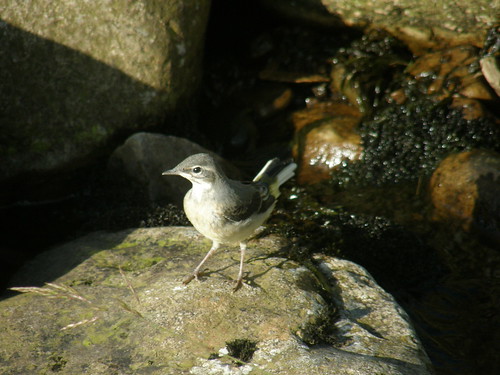 …and then led me up the limestone gorge… 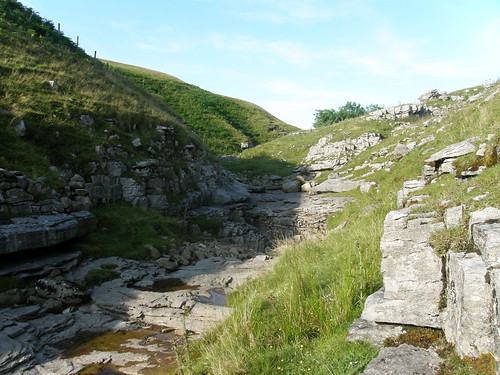 …hopping and fluttering, never too far away. A very trusting little chap. I took loads of photos. Meanwhile his/her parents were doing their collective nuts. Flying overhead and then veering away – showing their innocent offspring how to escape. Eventually, the youngster cottoned on and left me to the gorge and my walk. 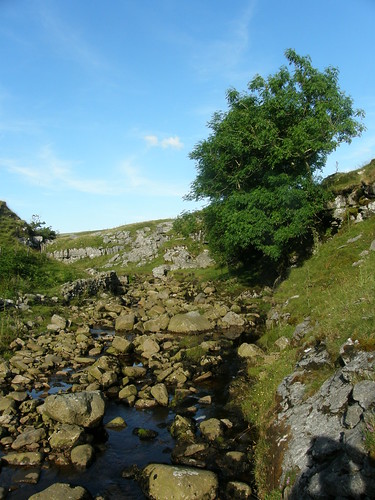 Frankly, it was delightful. Once upon a time this was something of a favourite route and I can’t believe I’ve neglected it for so long. Back before the the Access Laws were passed, this walk always had the added frisson of a possible meeting with an irate landowner, although it never actually happened to me, and it’s quite possible, probable even, that the shotgun wielding loon only existed in my imagination. 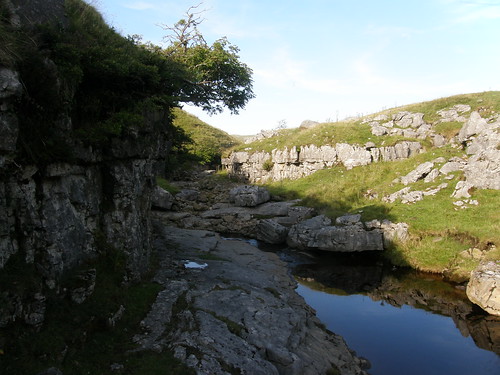 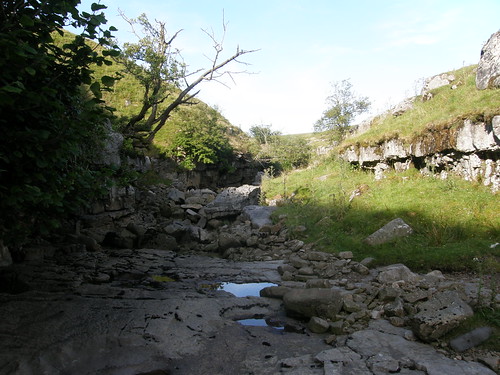 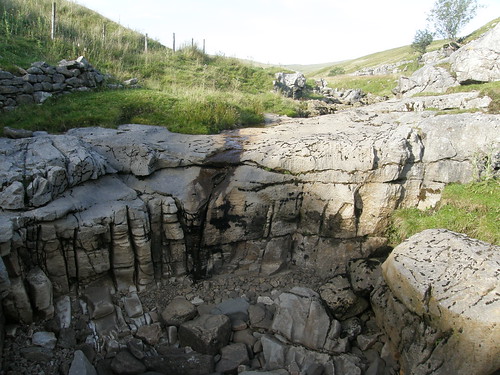 Eventually, the gorge comes to an end and the valley opens out. 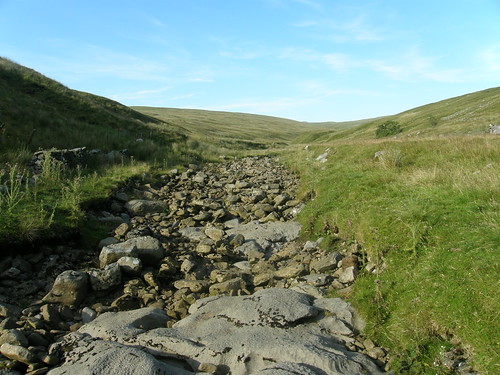 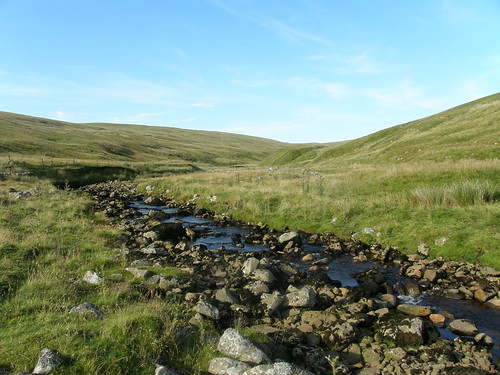 Where the valley narrows again, there are several small falls. 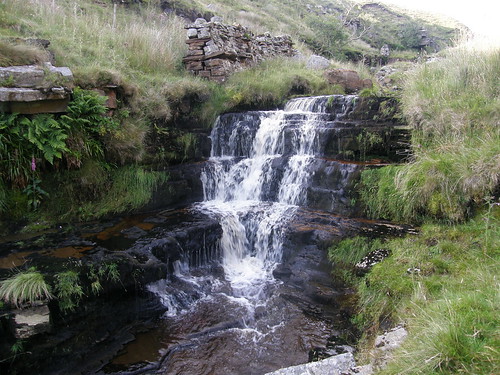 Once again, I initiated a wildlife encounter by almost standing on an unfortunate creature… 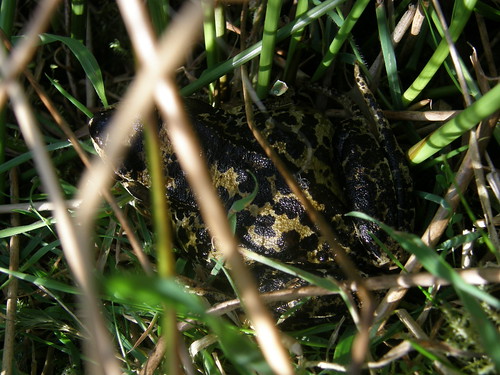 …an impressively huge and strongly marked frog. S/he was down amongst tall sedges and so difficult to photograph. 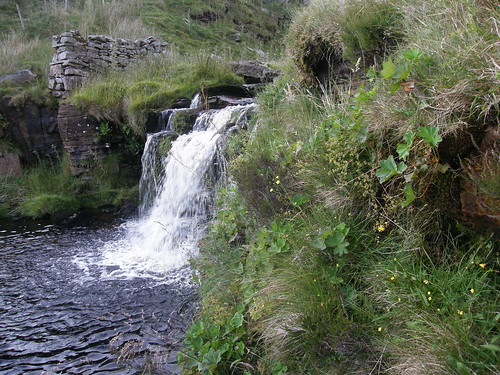 I was impressed by the lady’s mantle growing beside this fall. I expect to see the alpine version in the hills, and often do, but apparently the larger leaved version is also endemic in British uplands.

Because I was following the stream or the streambed, I hadn’t had to give much thought to navigation. As luck would have it, I stopped for a drink and decided to take a peek at the map just, I realised, by Long Gill Foot, which was exactly where I had intended to leave the stream. 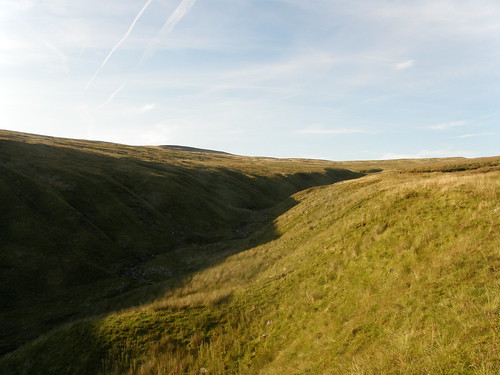 In the past I’ve turned left hereabouts, heading up onto Crag Hill so that I could follow the watershed round to Gragareth, but I knew that I didn’t have the time for that on this occasion. I turned the other way, following Long Gill. A large bird perched on a fence post lifted lazily and in a couple of wing-beats was far across the valley – another buzzard, and a close encounter which was so brief that I didn’t even have my camera in hand before it was over. The climb was long and gentle, but I was beginning to feel a little weary. A host of LBJs entertained me – I think meadow pipits, and a wren emerged from a cavity in a drystone wall to berate me as only wrens can.

Much as I’d enjoyed the confines of Ease Gill, it was pleasant to finally have some more expansive views. It had been one of those warm, still midsummer evenings and looking back towards home (I think that’s Warton Crag on the left below) I wasn’t too surprised to see… 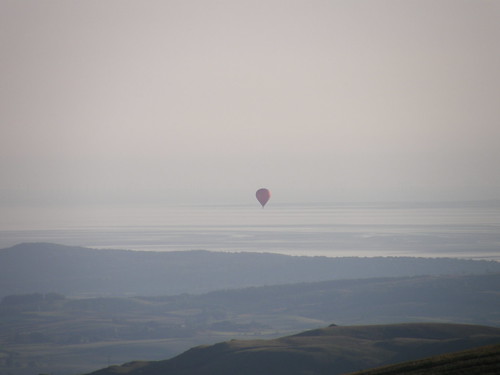 …a hot-air balloon, which are pretty ubiquitous in this area when the weather is like this.

The ridge on to Gragareth looked inviting…. 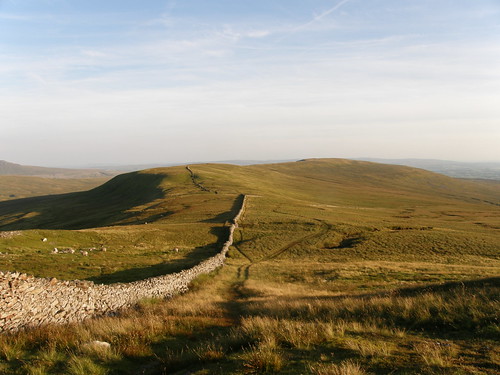 Whernside is a neighbour, but Ingleborough is always more photogenic… 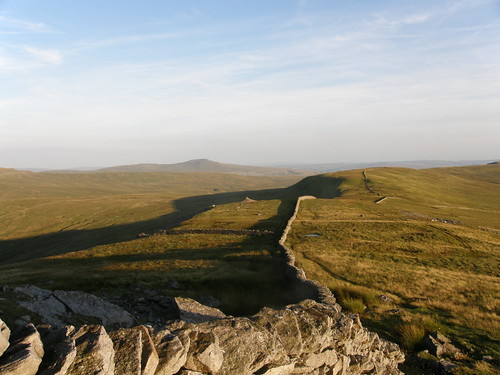 The Dentdale side of Great Coum is relatively steep, and I suppose I should have wandered over to take a glimpse, but time was marching on, so I continued round to Crag Hill, which, although a little lower than Great Coum, has a trig pillar and so feels a bit more like a  summit. 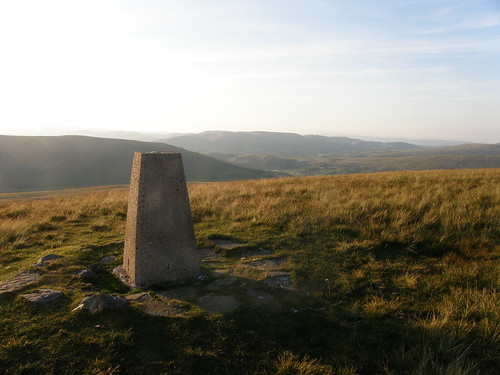 It was nine o’clock. I’d almost stopped for a bite of tea on several occasions, but somehow nowhere had quite seemed right. Maybe a meal on the top would be ideal? But now the light was running out, so I pressed on and ate a few tomatoes and some blueberries whilst I walked. 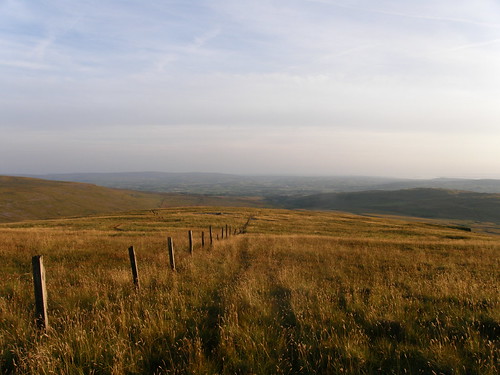 The descent route offered easy going at first, but the vegetation got taller, and therefore more obstructive the further downhill I walked. I was accompanied by clouds of small moths, or seemed to be. I couldn’t decide whether they were following me, which seemed unlikely, or if every square yard of the hillside had it’s own population which were taking flight as I disturbed the peace.

I’ve often enjoyed interesting encounters with wildlife here. On one particularly memorable winter walk, a sharp, clear day, I was down by Ease Gill Kirk when I saw a large pale bird behaving in a very peculiar way. I thought at first that it might be some sort of gull, but – no, where was it’s head and neck? The body seemed to thicken and get broader then stop abruptly. It was an owl! A short-eared owl I realised later:

In late winter and spring the short-eared owl may fly high up in display, calling with hollow, booming notes and clapping its wings rapidly beneath its body.

Quite extraordinary, it’s stayed with me, though it must be at least 15 years ago. What the description doesn’t say, is that whilst the bird is clapping its wings, those wings are no-longer performing their primary function and so it hurtles towards the ground.

The only other time I can recall seeing a short-eared owl was on a very cold day on the hills around Wet Sleddale. Haven’t been back since…now there’s a plan in the offing….

But that wasn’t a problem – at this latitude, at that time of year, there’s still plenty of light for quite some time after the sun has dipped below the horizon.

I came down Aygill, where I noticed another cave entrance amongst a jumble of boulders – what I now know to be Aygill Caverns – a cave system not yet linked up to the Three Counties System, although it’s known that the water from Aygill does flow through that way.

I arrived back at the car with a little light to spare, a bit tired, a bit muddied (I managed to fall over in Aygill) but extremely satisfied.

You can pick out my route here, I think. Long Gill is the one which has the dotted and dashed black line alongside it (I think the County Boundary). You’ll have to allow me some poetic licence for the 10 miles I quoted near the top of the post. It probably isn’t much short of that – I don’t know, I don’t really care either.

If you want to read about the Three Counties System:

(Sorry that it’s from Mail Online. My Granddad would be fuming, were he still around to fume.)

If you fancy spending a night at Bullpot Farm for the princely sum of £5:

If you want to hear the (slightly nerve-wracking) cry of a buzzard: