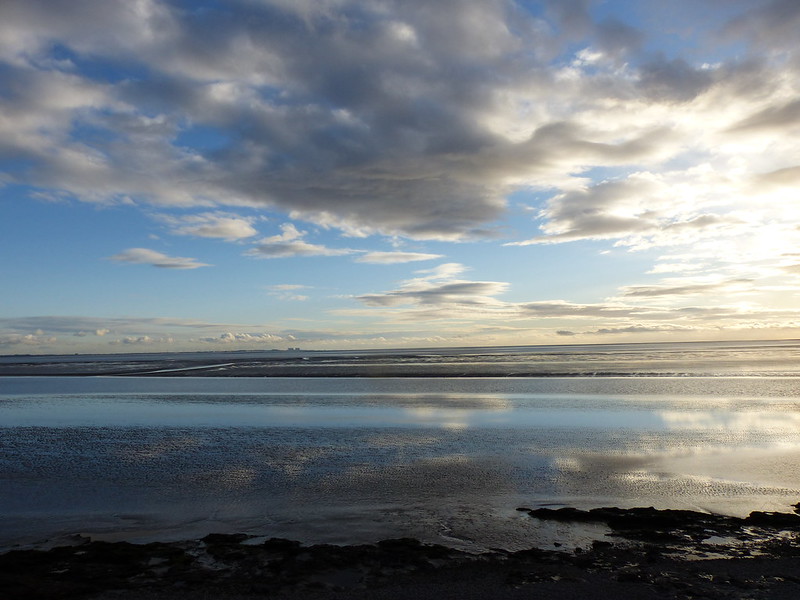 What I remember about this walk is how pleased I was to be out walking after work and it not yet the end of February. 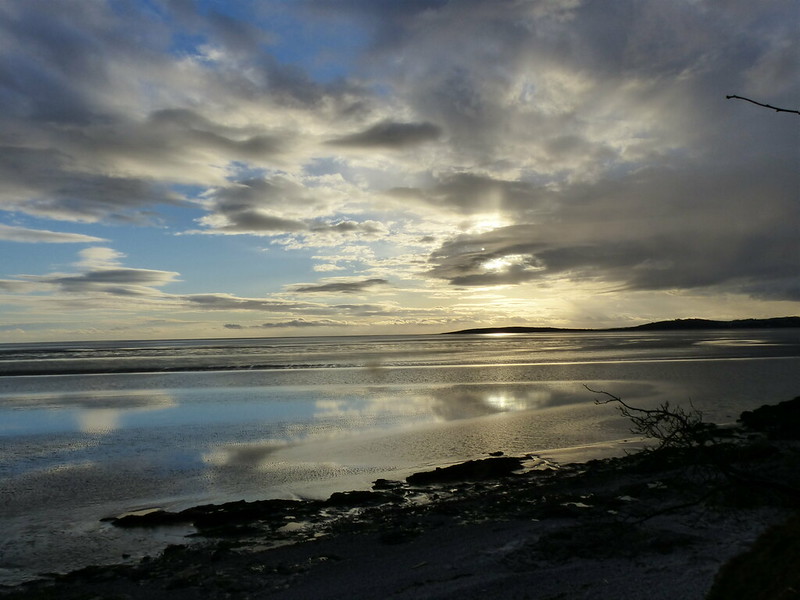 Admittedly, I did escape from work unusually early, but, having done so, I was busy making resolutions – this would be the first of many and I would make this a bumper year for evening wanders. 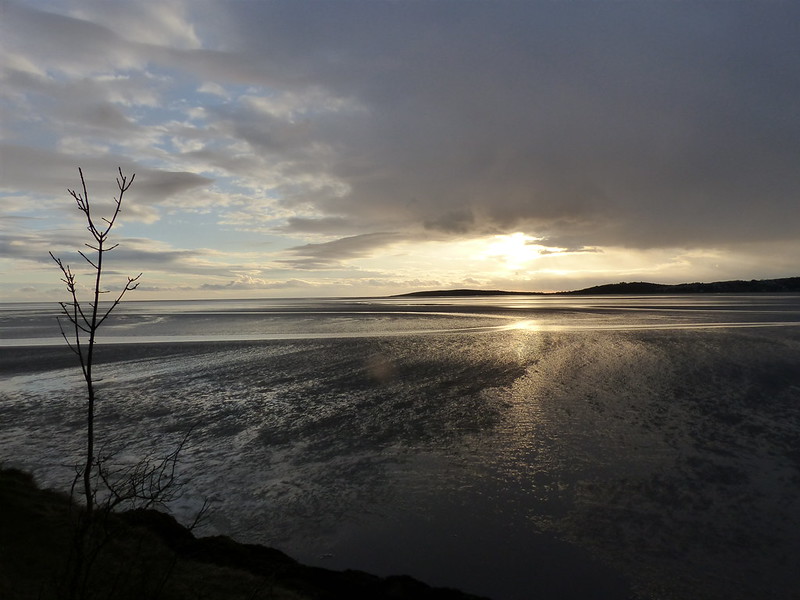 The other thing which sticks in my mind is that, after I had strolled to Far Arnside and then around the coast to White Creek ,how much like hard work I found the climb up over Heathwaite and up Arnside Knott and, therefore, how much I was in need of lots of recreational evening jaunts. 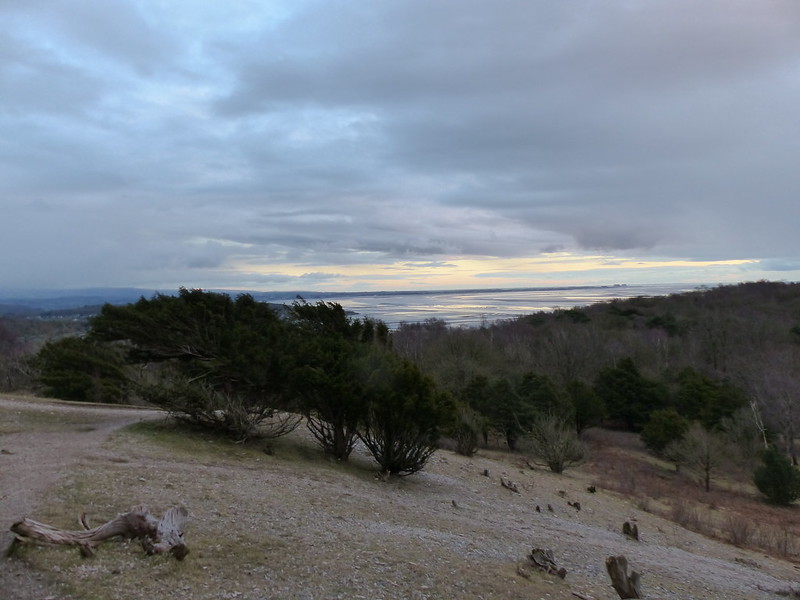 Actually, I stopped some way short of the summit thinking I was running short of daylight. That was the excuse I told myself, anyway.

Haven’t managed a longish evening walk since then. Must try harder!

An Early Start to the Post-Work Walk Season

Gathering on Arnside Promenade, opposite The Albion.

From guidebooks to guides: every other weekend from the spring through to autumn, Cedric Robinson, the Queen’s Guide to the Sands, or the Morecambe Bay Sand Pilot, leads groups across the bay from Arnside to Kents Bank. The first such expedition this year was at the end of April. Two different charity groups had sponsored walks organised, one of which was The Friends of Chernobyl’s Children which has a very active local group in Silverdale. Consequently, many of our friends were joining this walk, and we decided to go too.

Before the Kent viaduct was built, cross sands routes were a very commonly used link between Furness and the rest of Lancashire, but shifting channels, speeding tides and the presence of quicksand made experienced guides a must. Hence the Queen’s Guide, an unpaid post which has existed since the sixteenth century.

As the gull flies, from Arnside to Kent’s Bank is not too far, but a suitable place to cross the Kent has to be found. To that end we walked downriver and through the caravan park to White Creek…

Where we stopped briefly to enjoy a last opportunity to get some shelter from the wind, to grab a snack and, for most people it seemed, to have a pee in the bushes.

Then we were off across the sands….

As you can see, the sun shone. But the wind was in the east and it was bitterly cold.

We seemed to walk…

…getting further and further out into the bay, before we finally found a channel to cross.

It wasn’t too deep.

Quite easy in fact. What was all the fuss about?

It wasn’t the Kent! Just a channel left behind where the Kent ran last year.

Little S was finding the whole thing a bit of a trial. He was momentarily cheered by finding this tiny starfish however.

There’s an incredible feeling of space out in the bay and great views of the surrounding hills.

Eventually we reached the actual Kent channel. “No more than knee deep” we were told. I carried S across and in the process got wet far above my knees. I must have short legs. My friend the Adopted Yorkshire Woman did once tell me: “Your problem is that you’re too short for your height.”

From there we headed not directly for Kents Bank, but more towards Humphrey Head, before finally following the foreshore around to the station at Kents Bank, where we’d left a car. The foreshore was muddy and slippery, and not made easier by the fact that I now had S on my shoulders most of the time.

Looking towards Kents Bank and Grange.

The guide and his helpers did a great job. The route was marked with branches jammed into the sand, somebody must have been out the day before to do it, and I gather that there may have been more work for them to do on the Sunday too.

A and B enjoyed their walk. S, in retrospect, was probably a little on the young side. I’m not sure how far we walked, one of the organisers told the kids 12 miles near the end, but that was on a simple 4 hours at 3mph calculation, and I suspect wildly inaccurate. I’d definitely do it again, but I fancy a warm summer evening with a Morecambe Bay sunset and fish and chips in Grange thrown in.

If you feel inspired and fancy having a go at a Cross Bay walk there’s a directory of organised walks here:

If you’ve enjoyed reading the blog and feel moved to sponsor the kids (well you never know!) there’s an address for donations here:

The day after my idle afternoon stroll. The weather was still holding fair, although much colder than it had been. I nipped out for another short wander, calling in on a couple of local spots I haven’t visited in a while. In Bottom’s Wood the ramsons are tall and verdant and almost in flower…

At Woodwell the pond is silting up, and the water level was very low after the long fry spell of weather. There were very few tadpoles to be seen this year, but even more small fish than ever. I’ve never photographed the fish here. The camera’s autofocus seemed intent on keeping it that way…

But I eventually got some clear(ish) shots…

My best guess is that these are minnows, but I’m not confident about that and as ever stand ready to be corrected.

This pond skater seems to have made a catch…

I think that there are at least three types of snail in the pond. Here’s one of the ‘rounded, green shell variety’ (I’ve got a book with these in somewhere – now what have I done with it?)

One edge of the pond is greeny yellow with flowering golden saxifrage.

And some trees are coming into leaf at last…

From Woodwell I went down to Jack Scout to find some thing of a surprise. The banks and channels have changed. The wall which extends into the bay from Jenny Brown’s Point has all but disappeared, with only a small section close to the shore visible. The rest has disappeared under a new sandbank.

Looking across Morecambe Bay. Heysham power station on the horizon right of centre.

Cliffs at Jack Scout. The dark line right of the cliffs is the Bowland Fells, Clougha Pike on the extreme right-hand end.

A sloppy and muddy surface here has been replaced with a fairly sandy surface, pleasant to walk on. This small cove is Cow’s Mouth which was one of the embarkation points when lots of traffic crossed the sands of the bay bound for Furness.

I was able to follow the shore back around to the village, mostly walking on the sand, although a channel under the cliffs necessitated retreating onto the shingle at the top of the beach…

…and then onto the cliff path.

A sizable flock of birds whizzed overhead with an impressive whoosh, then flew low over the water. Very impressive to watch. I was pretty sure that they weren’t oystercatchers. My blurred photos of them in flight showed white edges to the wings and a large white shape on their backs, but the most telling photo was the one I took after they had landed…

The advent of British Summer Time and the clocks changing brings the prospect of getting the kids to bed and then still having daylight for a walk. Out this evening delivering minutes of a meeting to various places around the village, but contrived to visit the Cove and cross the Lots too. As the light faded the birdsong seemed to increase in intensity – Robins and Blackbirds seemed to be particularly vociferous.

From the Cove I could see groups of Oystercatchers huddled along the edge of the channel. I could also just about hear what sounded like a cacophony of gulls somewhere far out in the Bay. In the low light the Bay is a fairly forbidding place – all brown mud/sand and grey sky, but I find the view really restful.

The spit of land sticking out into the Bay is Humphrey Head, which is well worth a visit. You can just about pick out some of the Oystercatchers. (You can see a bigger image on Flickr but they are still just black dots.)

The dark line dead centre of the photo is (I believe) Priest Skear, a rocky outcrop.

This one is looking south. This time you might be able to pick out the lights of Heysham power station in the centre of the picture (the bigger image on Flickr definitely helps in this case.)