It’s late September, the forecast is good and I’m still capable of getting out of the door early enough to be parked at the end of Haweswater by eight in the morning.

(In fact, it’s early January, the forecast is rotten and after two weeks off work – with mostly miserable weather – I’m finding it hard to drag myself out of bed until long after eight. But that’s by-the-by, bear with me here, I’m attempting the Sisyphean task of catching-up with my blog posts. And re-living a splendid day out into the bargain.)

I’d driven up in fine weather; it looked like blue skies and sunshine would be the order of the day, but Sod’s Law was in operation and the hills around the head of Haweswater were cloaked in cloud. However, I was a man with a plan – to join up some blue bits on the map, namely Small Water, Kentmere Reservoir, the River Kent and Blea Water – and I was not to be deterred. In fact, I was feeling pretty keen, and as I set-off to execute my plan – walking towards Small Water heading for the the Nan Bield Pass and hence Kentmere – rather than losing heart because of the weather, I was distracted by the left-hand skyline heading up towards Harter Fell. From below it looked like a ridge and a very tempting one at that, but a glance at the map revealed that it was really an edge formed by the intersection of the slopes above Small Water and the steeper eastern face of Harter Fell. Still….I’d never been that way before. I vacillated for a while as I plodded upward: should I stick with the original plan or divert onto Harter Fell?

In the end I compromised. I went to Small Water first….

….but then took a rising line across the slopes above it to hit the edge of the crags on Harter Fell’s eastern face, following those crags up onto Harter Fell.

I was pleased I took the diversion, although the views weren’t great.

Indeed, I was soon in the cloud. From odd glimpses I could sense that most of the Lake District Fells were bathed in sunshine; looking directly overhead I could see clear blue sky, but all around me was clag. I was pretty confident that it would lift though, and by the time I had descended to the Nan Bield, it had. From that point on sunshine ruled.

This is the view from Nan Bield…

…down to Kentmere Reservoir. On the lower left-hand side of the photo you can maybe make out the path descending across the slope. I took a more direct route beside Lingmell Gill. I was heading for the Reservoir and the Kent. I have, over several strolls and several blogposts, been following the course of the Kent between sea and source, and was keen to walk this, as yet unexplored (by me anyway) upper section.

But as I followed the gill down, it wasn’t the reservoir, or the river which feeds it, which had my attention, but the magnificent, curving, north-east ridge of Ill Bell…

Looks inviting doesn’t it? It’s another pathless ascent route which I haven’t yet explored and I was sorely tempted again. In the end, I decided to leave it for another time, but I must go back before too long.

I turned instead to the delights of the River.

These deep plunge pools put a thought in my head, sunny as it was, and when I came across a slightly larger pool…

…I stripped off and went for a brief skinny dip. (I know: that’s created an unpleasant image for those of you that know me. I hasten to add that the valley was deserted – no innocent hikers were harmed in the making of this blog post. What’s more, in case you’re worried, the reservoir was built to feed mills further down the valley and isn’t for drinking water.) Was the water cold? Yes – and so was the breeze, but not too bad: my kids went swimming in Grasmere that same day, so it must have been a reasonably warm day.

I followed the dwindling river into Hall Cove where several streams meet to form it. The most prominent of those streams flows down the valley on the right of the picture below and I had thought of following that onward, but I was now drawn by the rocky shoulder of Gavel Crag.

The way was steep. The crags were broken, but I engaged in a little scrambling. There was probably a lot more to be had if you went looking for it, although nothing very sustained.

Around the base of the crags and boulders this herb-like plant grew in profusion….

Can anybody offer an I.D.?

Now that I was on the plateau, the views were superb.

Looking down into Hall Cove.

I wandered over to Thornthwaite Beacon for a late lunch. There were a fair few people about, which was a bit of a shock after a virtually pathless wander during which I had hardly seen anyone.

The wind was quite biting here, but I found reasonable shelter in the lea of the tall stone beacon.

With two stiff ascents behind me, I decided to take a fairly direct route back towards the car. I used the path, popular with Kentmere Horseshoe walkers, which contours round the head of Hall Cove from near Thornthwaite Beacon to Mardale Ill Bell (again that’s – ‘ill bell’).

Looking back to the upper reaches of the River Kent.

For anybody who might be thinking of following in my footsteps: that’s the shoulder I climbed in the centre of the photo (Gavel Crag is the nearest named feature on the OS map so I’m calling it the Gavel Crag Ridge). It looks formidably steep to me, but it was OK, even for a wimp like me.

Here’s a closer view of the upper part:

On Mardale Ill Bell I discovered a bonus bit of blue, a mini tarn.

I’d picked out another off-piste ridge for my way down: Piot Crag, which is the ridge dividing the two corries containing Blea Water and Small Water.

This is the view looking down it:

Again, it was a little steep in places, but with care made for an interesting way down and would, I think, be fun in ascent.

One final view: this is Harter Fell, (seen from the path down from Blea Water):

The ‘edge’ which caught my eye is the dividing line between light and shadow on the left. The lower rib might make an interesting scramble, but I can’t be sure because I didn’t take that route. I climbed the grassy slopes in the centre of the photo and then went left across the obvious large and grassy shelf to the edge of the crags, and up from there.

A top-notch outing. Three Birketts included, none of them new, but all of them by routes new to me, at least in part. 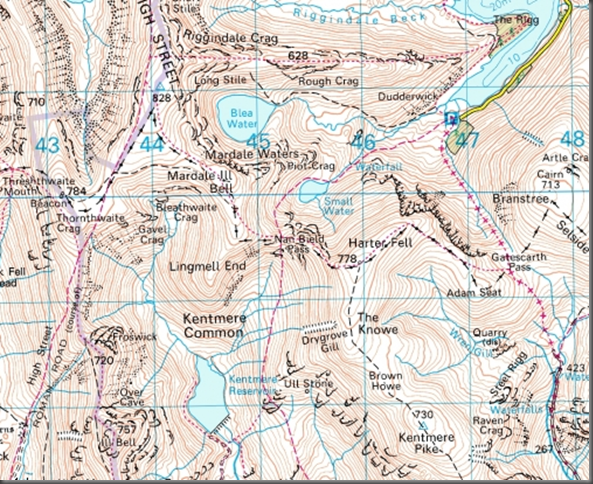 Advertisement
Off Piste around Mardale and Kentmere