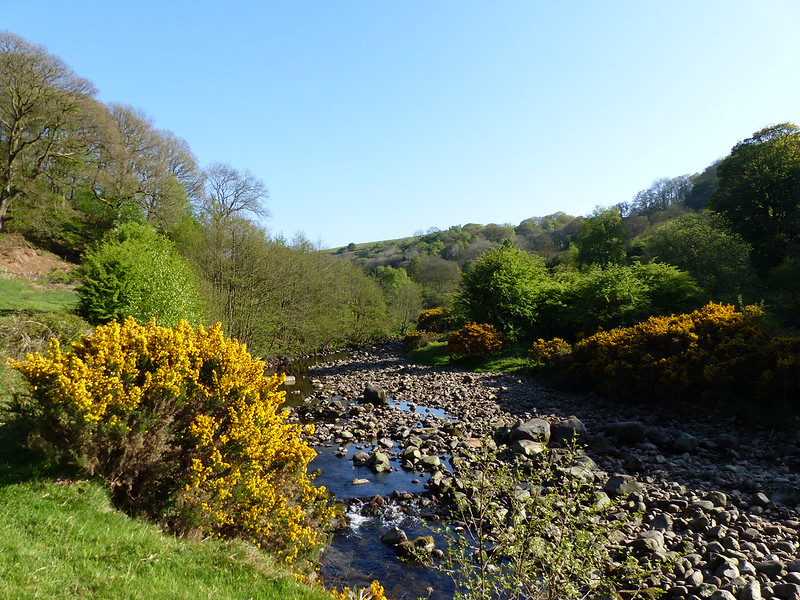 May arrives and brings with it the post-work evening walk season. Well, what I think of as ‘the post-work evening walk season’. Of course, I’ve been walking after work in the evenings all winter, in the rain and the dark, and during the spring, as the evenings have lengthened, my walks around home have gradually lengthened with them. But now there’s enough light to justify a short drive and a longer walk somewhere a little away from my home patch.

If the outing featured in the last post was partly inspired by somebody else’s blog post, then this walk was, I think, influenced by one of my own posts. I’ve been at this blogging malarkey for a while now and am rapidly approaching the one thousand post milestone. Most of my posts illicit a trickle of interest and then disappear without trace, but some have a curious afterlife, which I can follow via my blog stats. There seems to be no rhyme or reason to this. For example, one post about a walk in the Wye valley gets a visit or two just about every day and the same holds true for a handful of other posts. The oddest of these afterlives is the curious popularity of this post, which attracts lots of readers from India, where, I can only imagine, a teacher or lecturer sets assignments on the essay ‘On Finding Things’ by E.V.Lucas. In search of something to plagiarise, the students who find my post about a family stroll in the woods must be sorely disappointed. Anyway, a post about a walk around Roeburndale, which TBH and I enjoyed four years ago at around this time of year, is another which has been making regular appearances in my stats of late. Which got me thinking about a return visit. 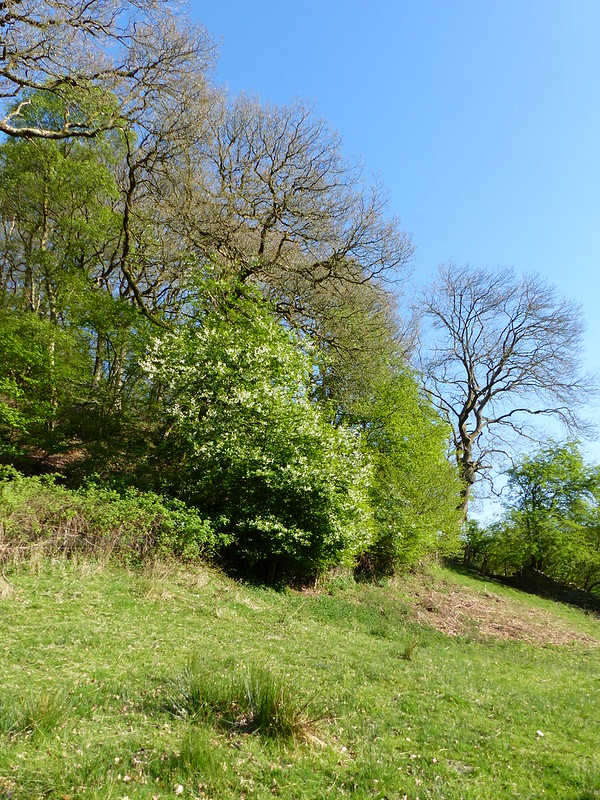 I was intrigued by this small tree, or large shrub, down by the river on the edge of the wood, by a riverside meadow. I’ve pretty much convinced myself that it is an example of our native, Wild Privet. The flowers are plentiful and quite striking. 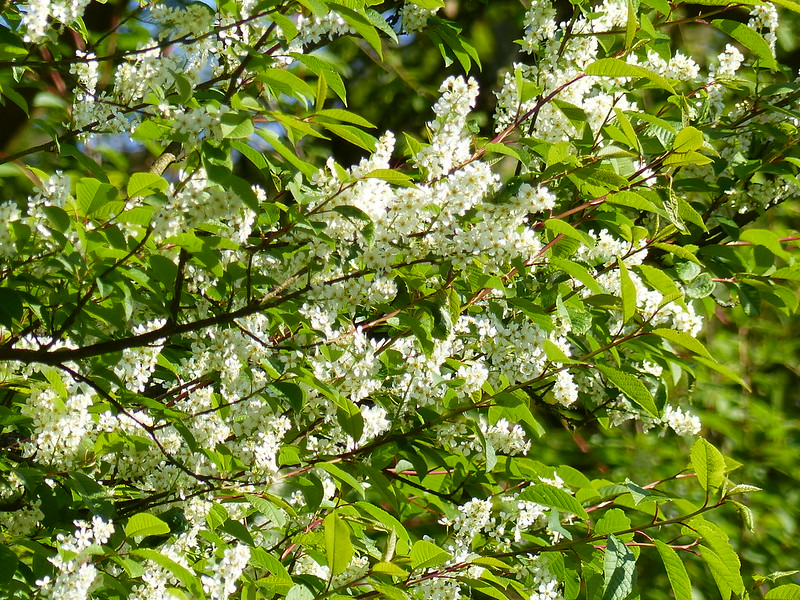 My only nagging doubt is caused by the fact that I remember privet hedges having tiny leaves, but I suppose that they may have consisted of imported cultivars of another privet?

Once again, the Bluebells and Ramsons in Outhwaite Wood were stunning… 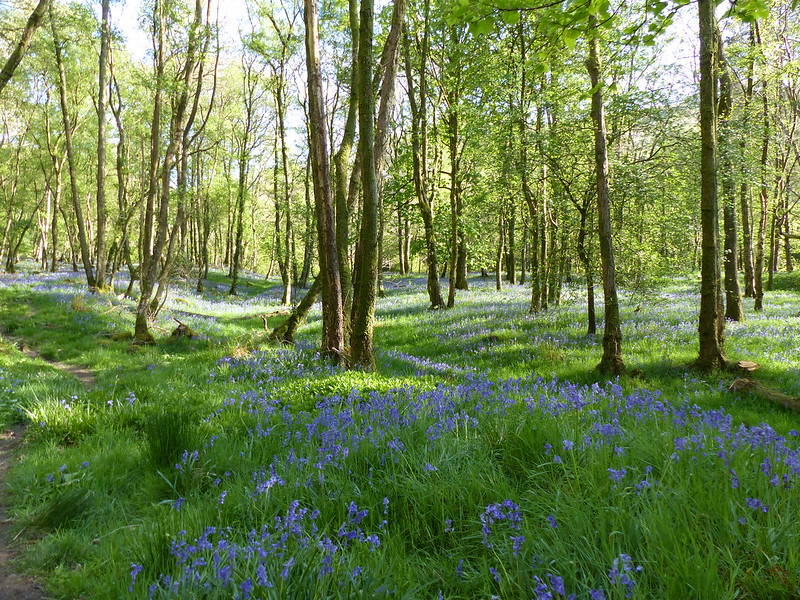 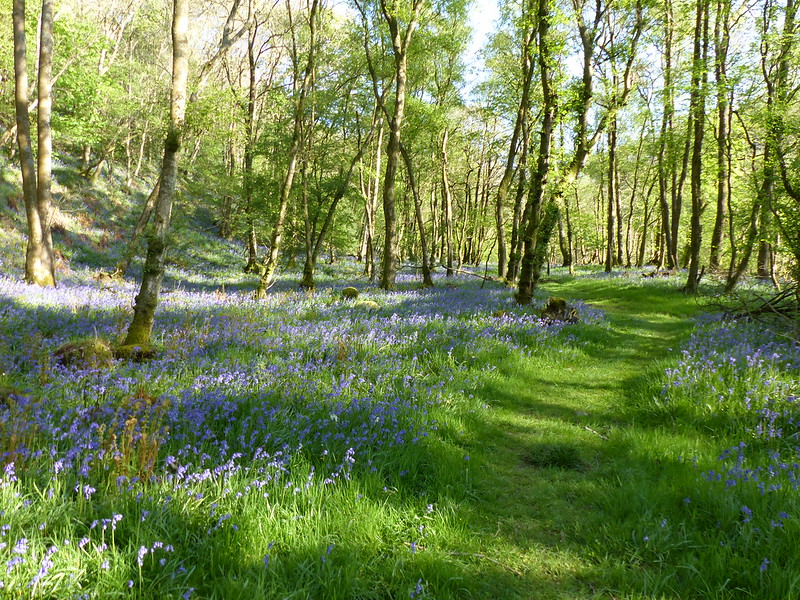 All too soon, the permission path leaves the river and climbs up through the woods to traverse their top edge, close to the field boundary. 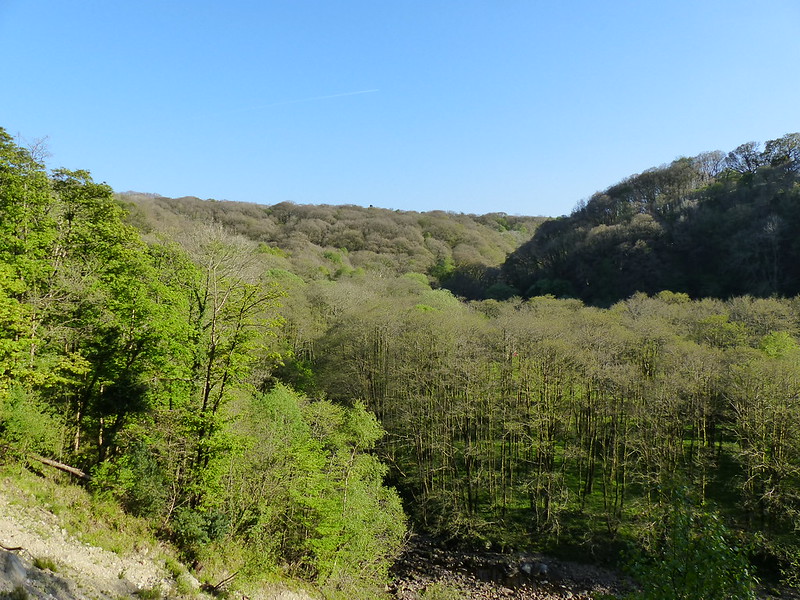 Before eventually dropping down to cross the river by this footbridge… 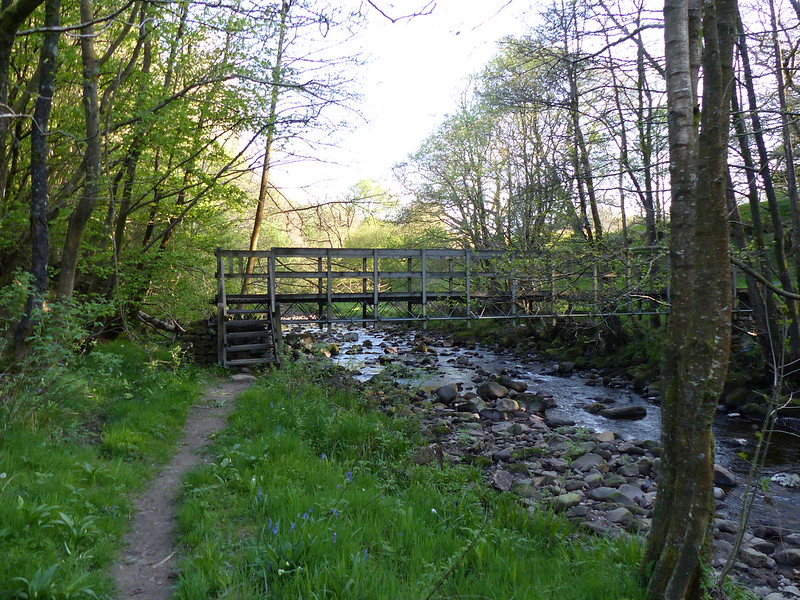 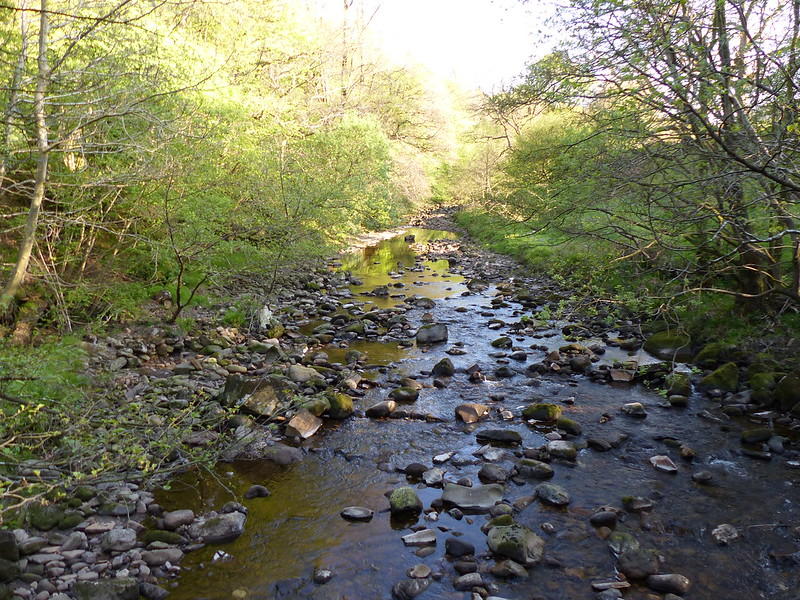 This is the stretch of river where I brought the children to swim a few years ago, and we were eaten alive by insects. No such problem on this occasion. 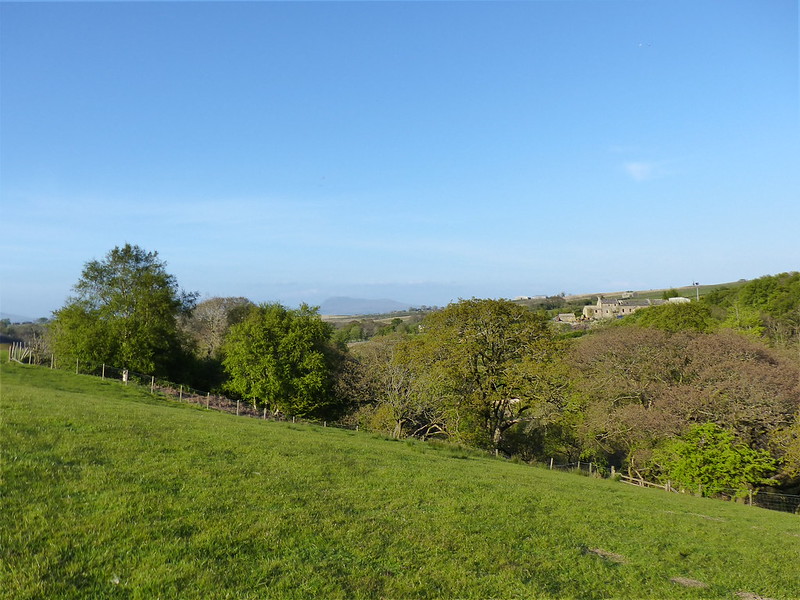 Roeburndale – Ingleborough in the distance. 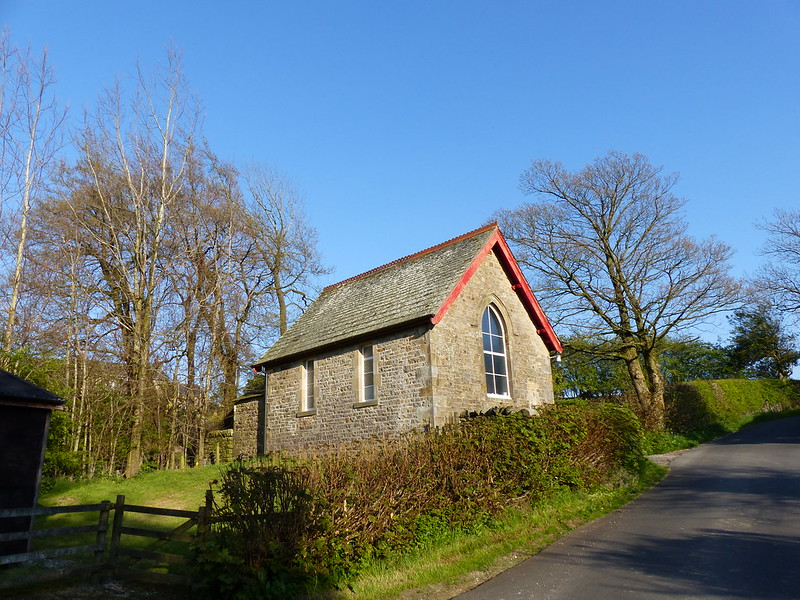 The route which TBH and I had followed turns left here and cuts across the valley before heading down, but I decided to continue onward, adding an extra loop around the head of the valley. (A PDF leaflet of that route can be found here and here, at least at the moment: the link I added to my previous post doesn’t seem to work anymore). 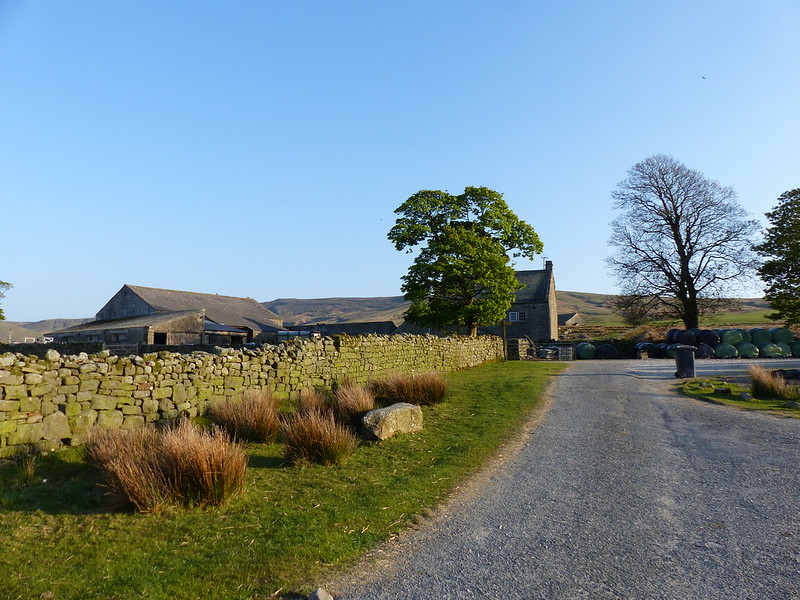 Approaching Haylot farm I spotted a couple of Hares, a treat since it’s something I don’t see all that often. Years ago – I can date it fairly precisely to the early 1990s – I watched a pair of Little Owls near this farm. I don’t think I’ve seen any since.

Just past the farm, I walked through a small field where I was mugged by a flock of sheep. I’m familiar with the late evening behaviour of sheep at lambing time, whereby they will group together and follow a walker through a field, making a proper racket in the meantime, but this particular flock were the most aggrieved and aggressive bunch I have ever come across, shepherding me out of their field on no uncertain terms, snapping at my heels as I went. Well almost. It was very unnerving. 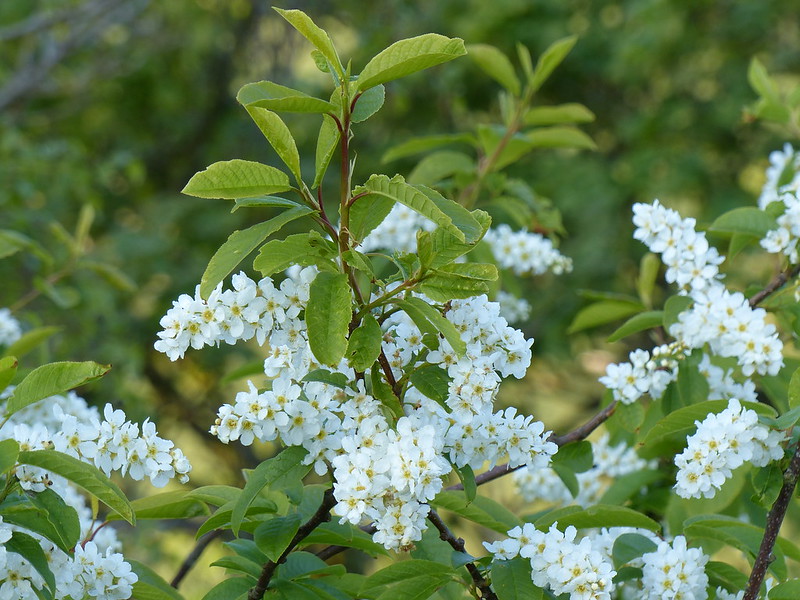 The path through Melling Wood was an absolute delight. Firstly, there were no aggressive sheep. Secondly, the path contoured across the precipitous slopes of Mallow Gill. I definitely need to come back this way again. This path is part of the Lancashire Witches Way which I intend to investigate further. 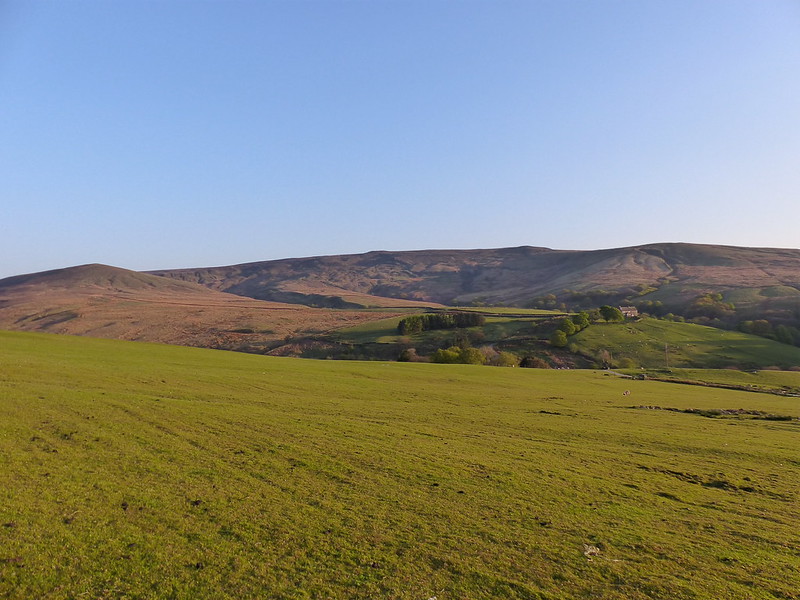 Mallowdale Pike and High Stephen’s Head – Ward’s Stone, the highest point in the Bowland Fells is not too far behind.

This was a great walk for birdwatching, but I didn’t do so well with my camera. In open fields there were Curlews and Lapwings on every side, but none of my photographs came out very well… 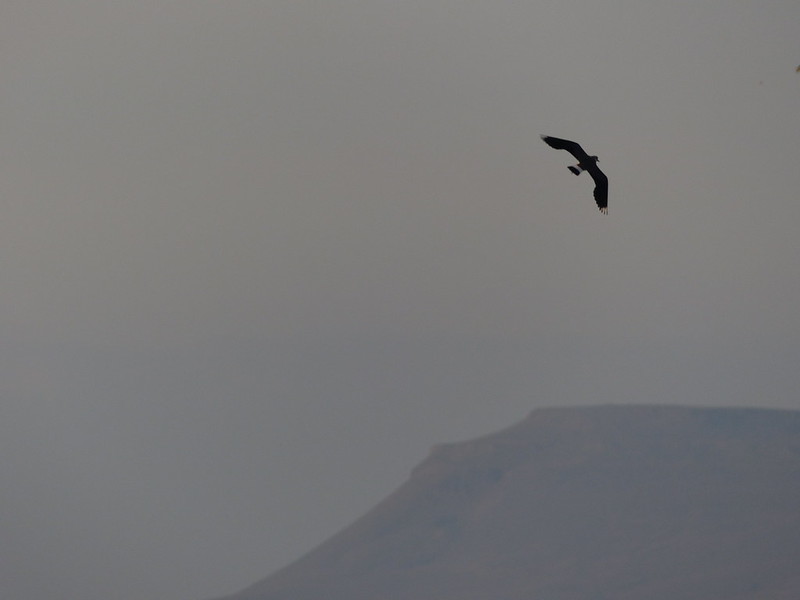 I could hear Cuckoo’s constantly, and thought I saw one in Outhwaite Wood, as well as a Pied Flycatcher, though I couldn’t swear to either. I missed the Hares too, which were gone before I could train my camera on them. 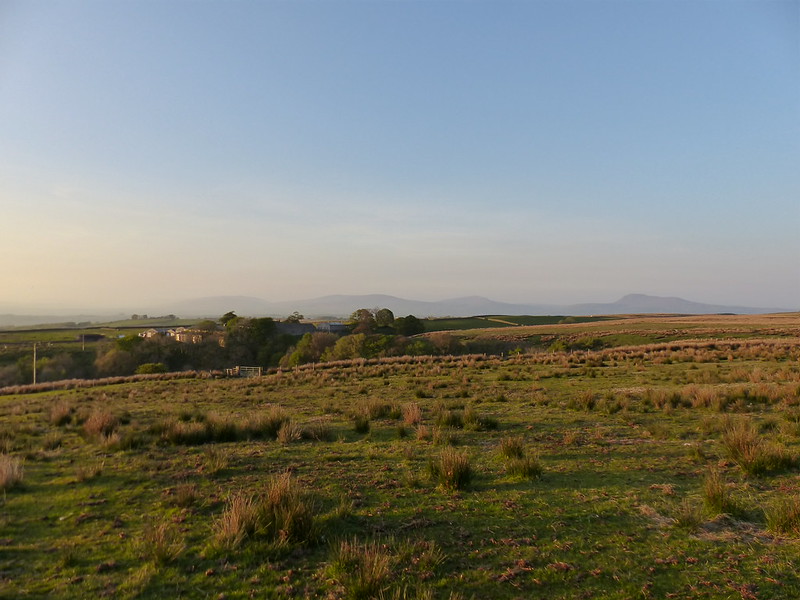 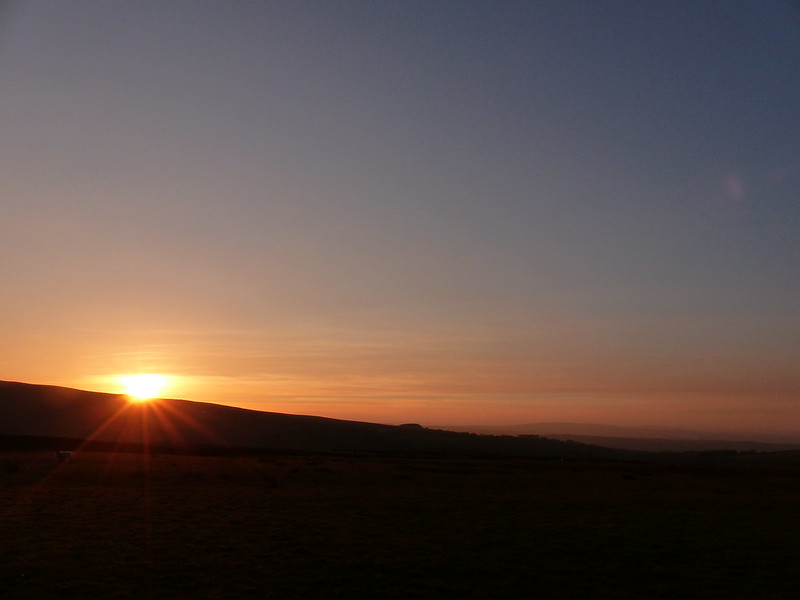 Just after reaching the road at Harterbeck, I found a comfortable boulder to sit on to enjoy the sunset and have a bite to eat. The farmer was still out and about tending his sheep and came over for a chat. He was tickled by the possibility that I might be walking home to Silverdale that night (which I wasn’t obviously), and also by the fact that I originate from the ‘flat country’ of Lincolnshire. (I know, it’s not all flat Dad, but I’ve given up trying to argue that one).

I decided to follow the road down back to Wray: easy navigation and no more mad sheep encounters. Even though the temperature dropped rapidly once the sun had gone, I was accompanied, most of the way down, by the flickering wings of bats which were coursing up and down the lane.

A great walk, but quite a long one for an evening after work, I estimate close to 10 miles. I was glad to get back to my car in Wray, but already scheming about my next outing.

I joined a National Trust ranger-led walk on Arnside Knott last Saturday night. The idea was to see bats and glow worms, but it was cold and misty, not good conditions for either. We saw many roding woodcock and a few bats, but it seemed like we might draw a blank on the glow worm front.

But when we dropped down hill at little we did eventually see two glow worms. Not a worm at all, but a beetle, the larval stage lives on the ecotone between woods and grassland, eating snails. During the short adult stage the flightless female climbs a grass stalk and then the end of her abdomen glows green – an attempt to attract a flying male. Apparently between 10 and 11 pm is the best time to see them – a tiny but bright point of light near the ground.