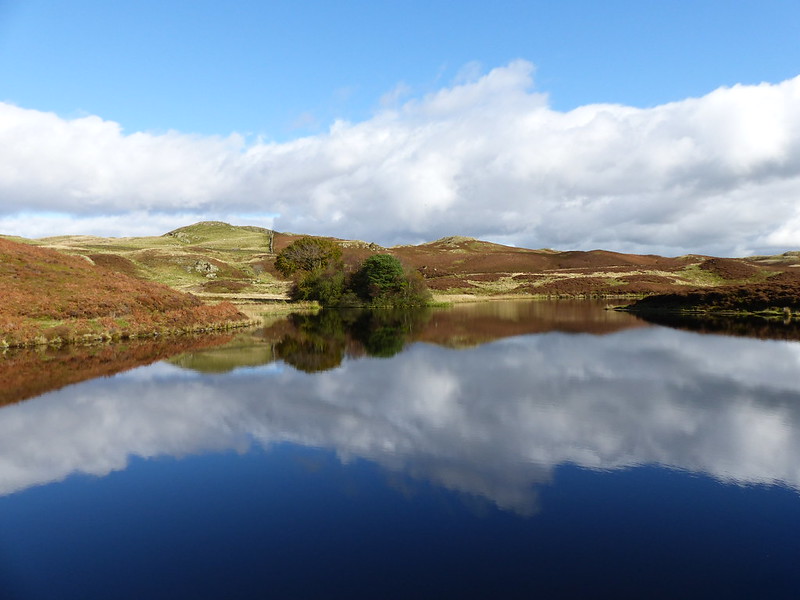 Something close to a Proper Walk to report on tonight, so I shall attempt a Proper Post to do it justice. This was still, however, another case of making-the-most-of-a-window-of-opportunity provided by Taxi Dad duties; it’s just that this was a slightly longer window than usual, and in a location with lots of potential for a good walk. It was a Sunday in early October, so ordinarily I would have been ferrying one or both of the boys to a rugby practice or match, but B had elected to take part in a charity mountain bike ride with his Scout group instead. Here he is… 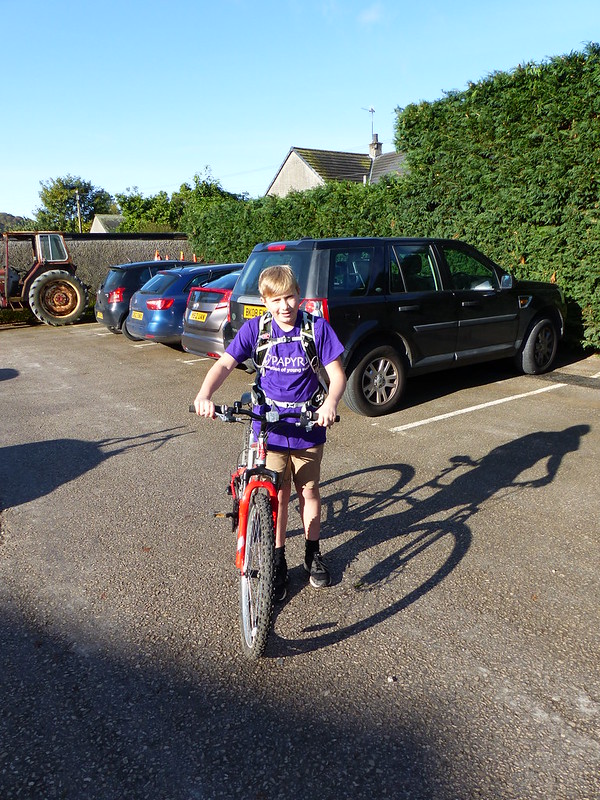 …in Staveley Mill Yard, before the ride. And here again… 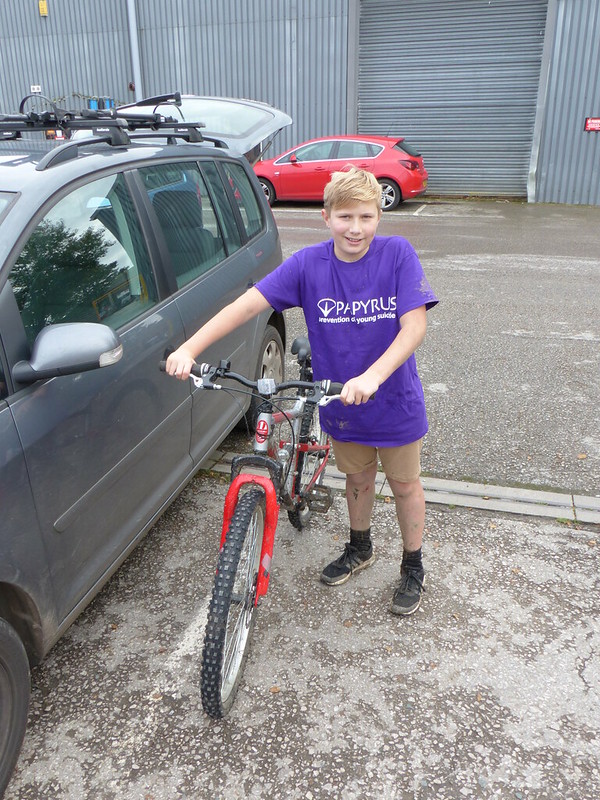 …afterwards. He’s disappointed with this second photo, because, he tells me, it doesn’t show the full extent of the cuts and bruises he picked up. Nor does it convey just how wet and muddy he and his bike had become.

They were raising money for Papyrus, a charity which works to prevent young suicide. Since then, B has also participated in a night hike over our local 3 peaks: Arnside Knott, The Pepper Pot and Warton Crag. There’s a collective JustGiving page here, should you feel inspired to sponsor B. 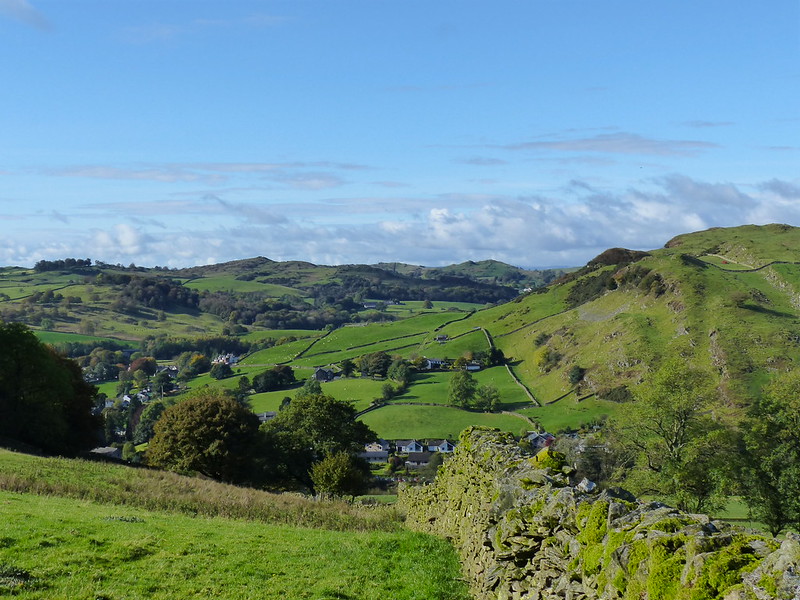 Reston Scar and part of Staveley from Spy Crag.

I had a few hours, then, whilst I waited for his return, and set off on a beeline for Potter Fell and its tarns. 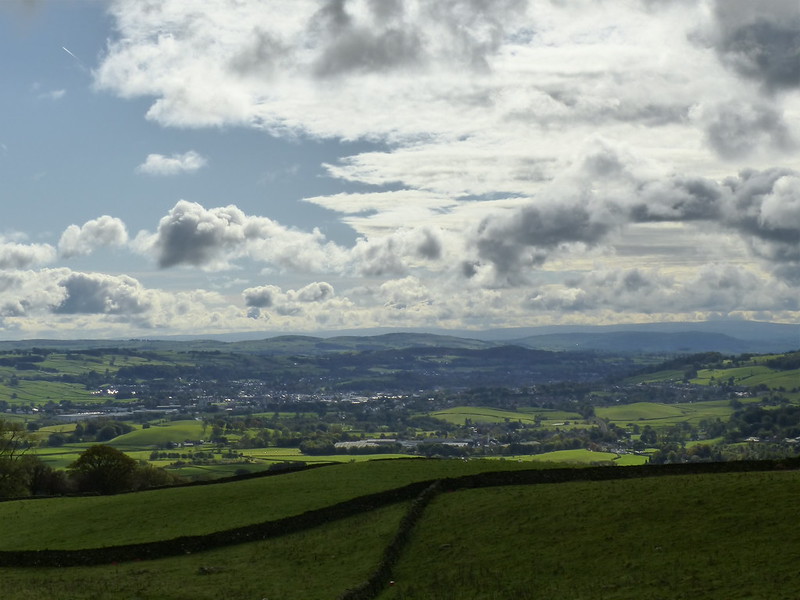 The initial blue skies and and strong sunshine slowly disappeared behind a layer of cloud, but, fortuitously, the cloud cleared again just after I’d arrived at Gurnal Dubs, where I intended to break for lunch and a brew. 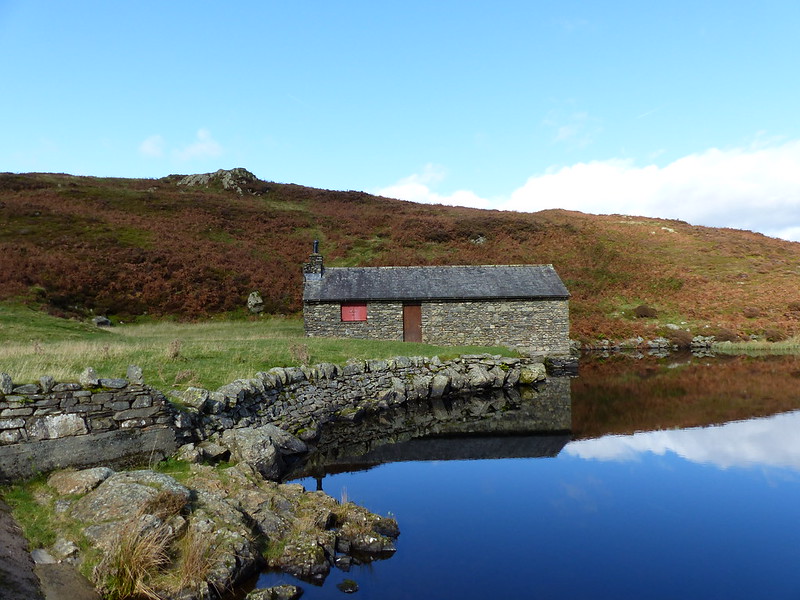 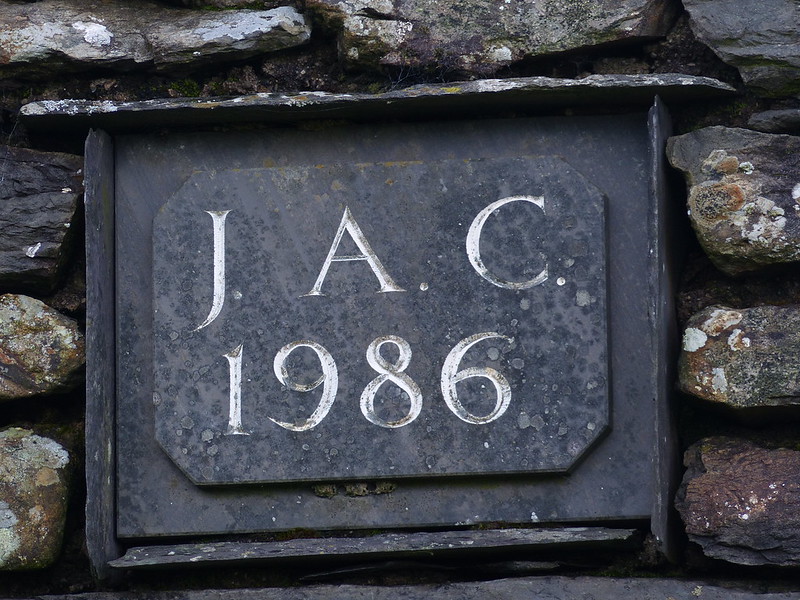 The tarns here were dammed and enlarged to supply water to the paper-mill at Burneside. The mill belongs to James Cropper PLC, set-up in 1845 by a man of that name and still managed by the Cropper family. I wondered whether J.A.C. might be the James  Cropper who managed the company relatively recently, a descendent presumably of the original James. Whoever owns it, I imagine it’s a lovely spot for boating; it was certainly a very pleasant place for lunch. 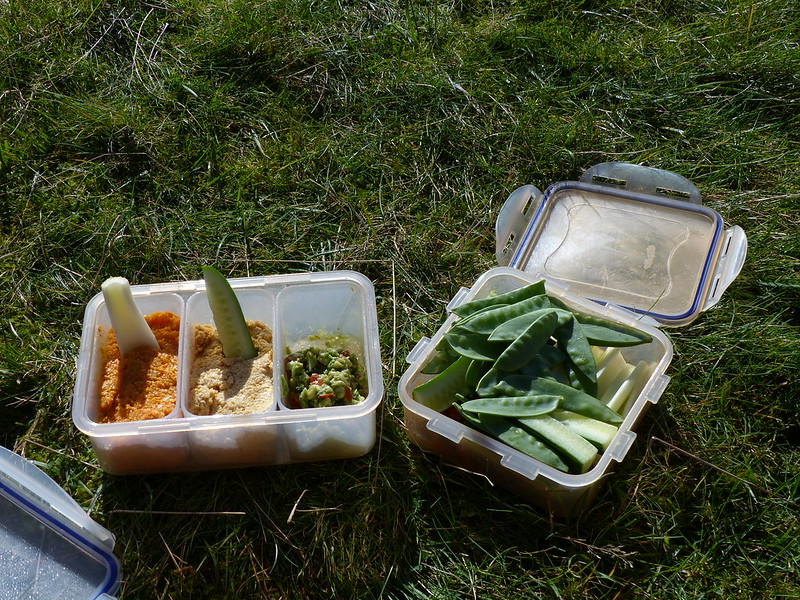 I had leftovers from the evening before: humus, guacamole, roasted carrot dip (very peanutty, nobody but me liked it), crudities, and a little bit of fried chorizo. TBH and A had recently embarked on a Vegan October. A Vegan October, I might add, which has now lasted right through November too, and which shows no sign of coming to an end any time soon. The Dangerous Brothers are beginning to adjust, but, back then, were not very supportive of the idea, and the fried chorizo was one of my attempts to placate them.

Whilst I tucked into my lunch and made a brew, a family of three arrived, changed into wetsuits and swam in the tarn. I’ve visited Gurnal Dubs many times, but it’s never really occurred to me to consider it as a place to swim. Next time, however… 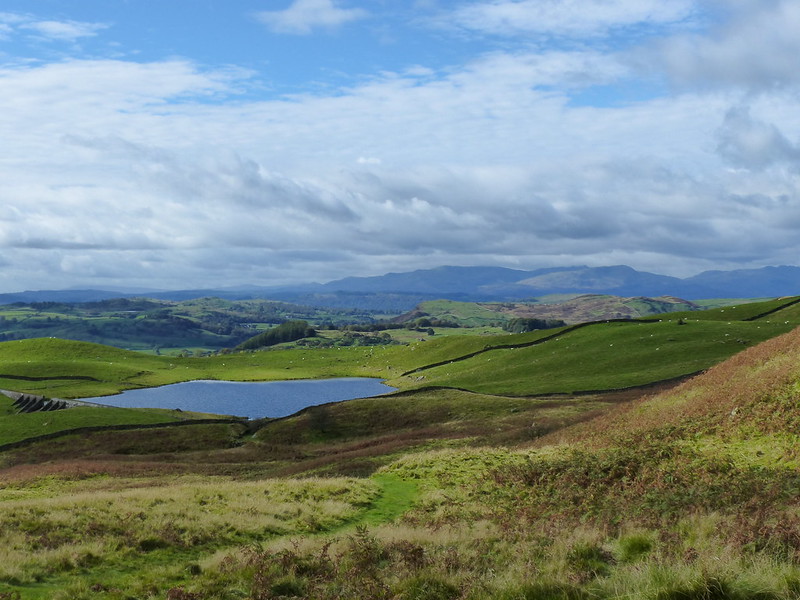 Potter Tarn with the Coniston Fells behind..

Eventually, I headed back to Potter Tarn and then turned south past Ghyll Pool. 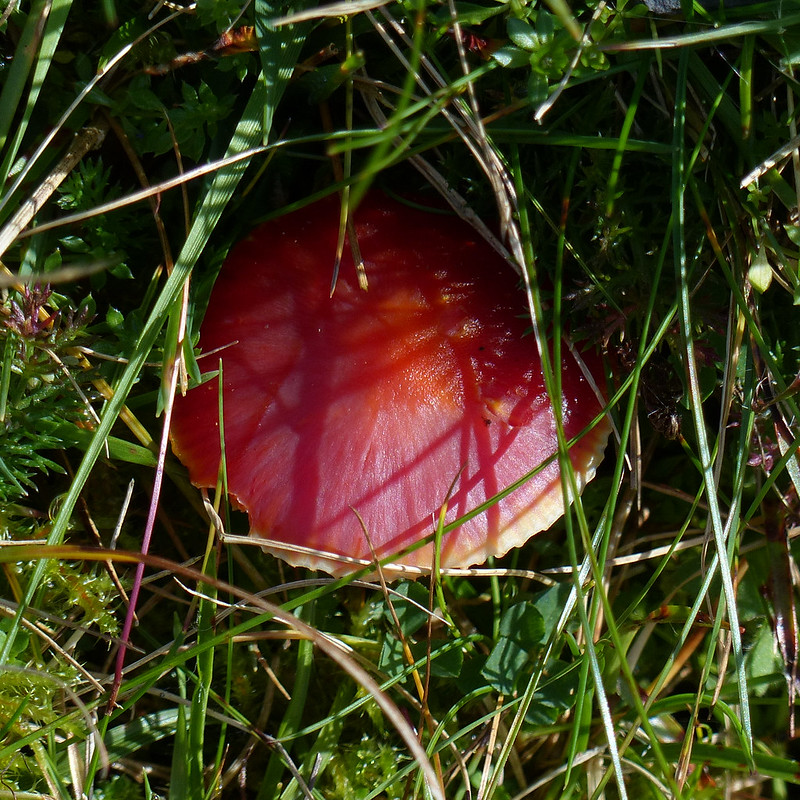 It was noticeably Waxcap season, with small fungi half-hidden in the grass in many places along my walk. 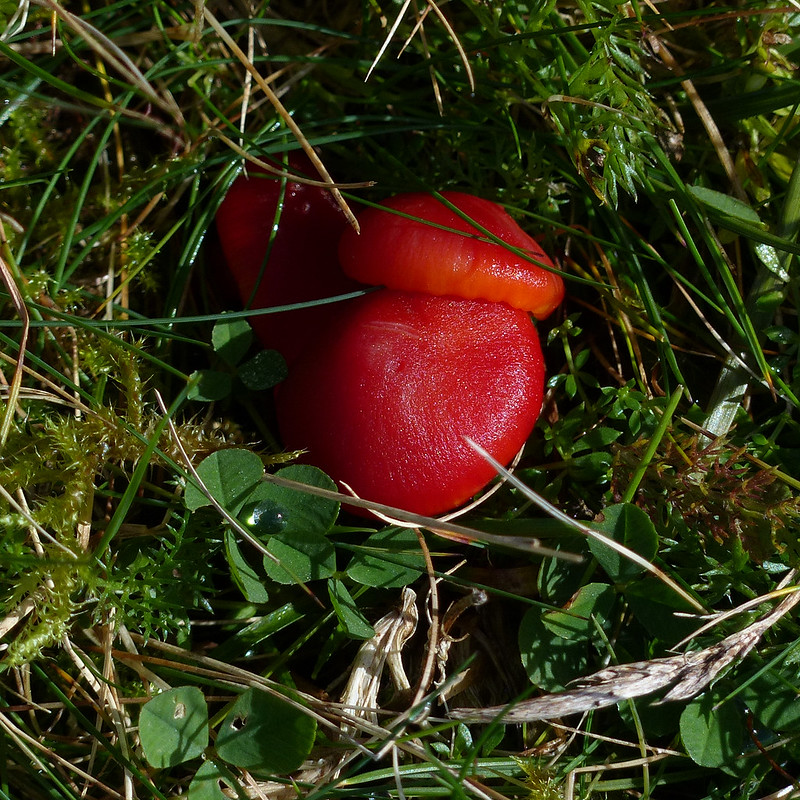 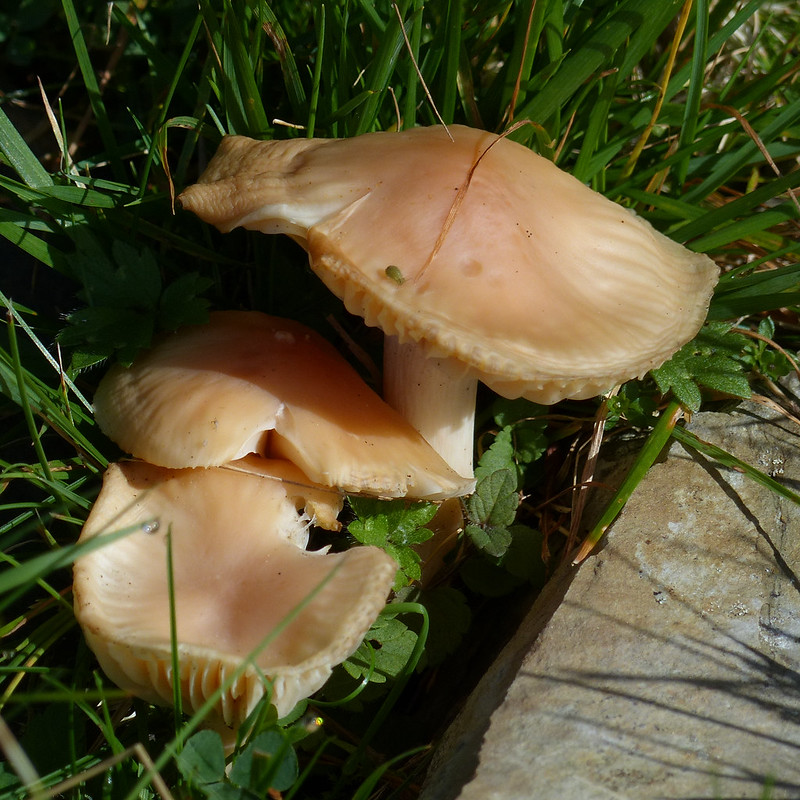 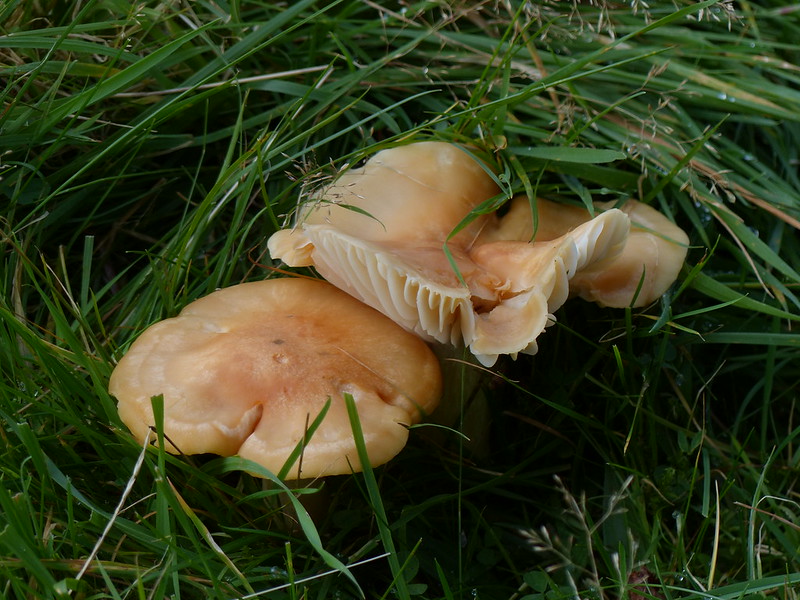 Apparently, these are quite nice to eat, although they are also under threat and so perhaps best left alone.. 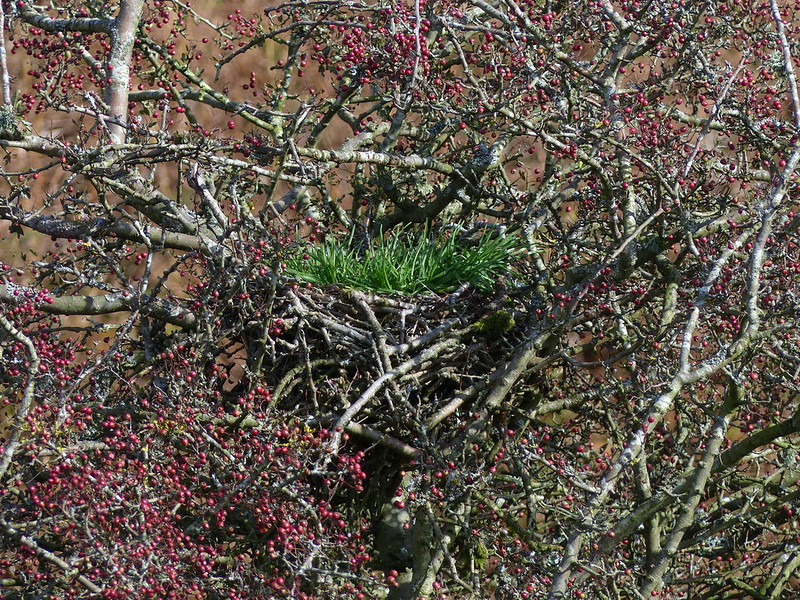 The striking green of the grass growing in this old nest really stood out against the bracken covered hillsides and red haws on the small thorn tree. 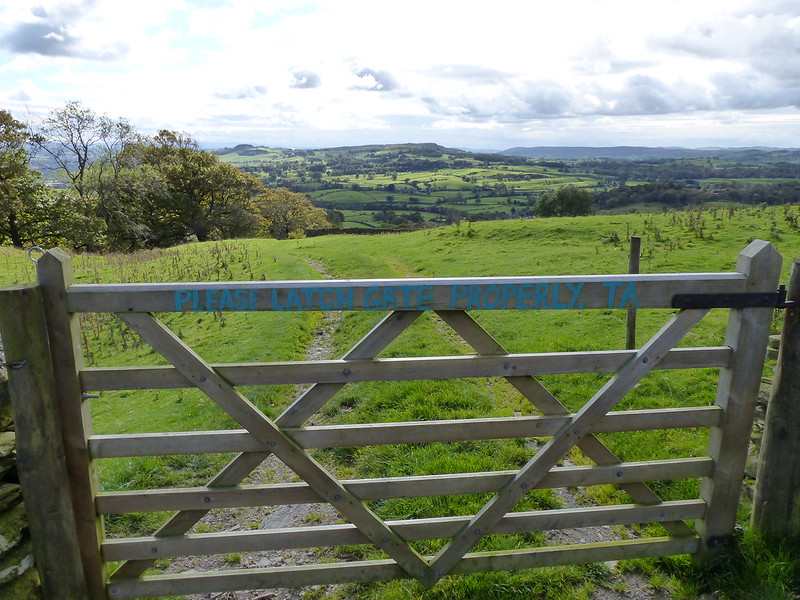 I liked the cheery request on this gate. That’s Cunswick Scar above Kendal behind. 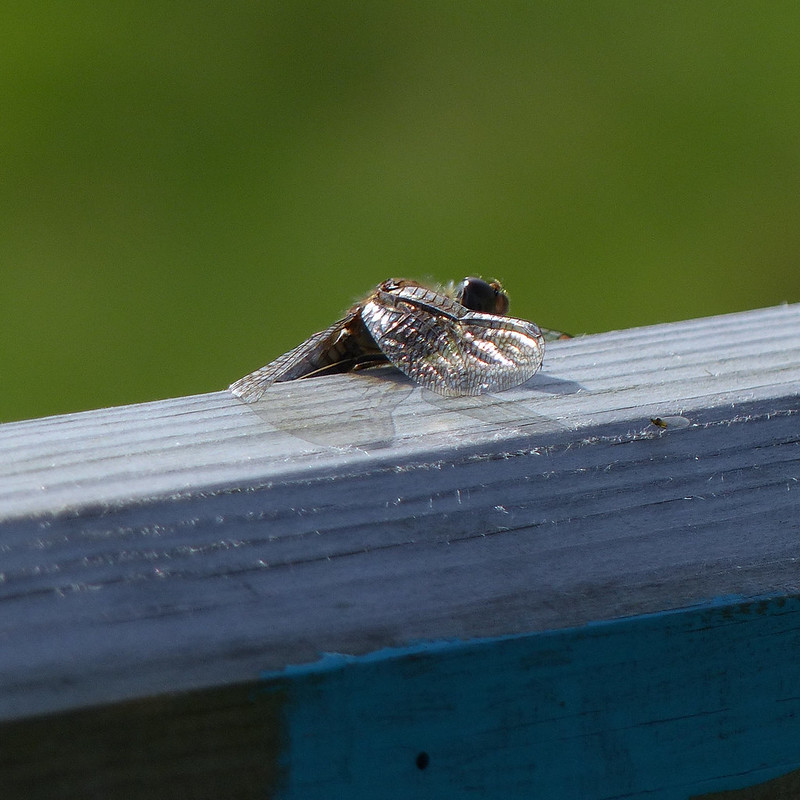 I’m guessing this is a Common Darter, an older female perhaps. It also liked the gate. 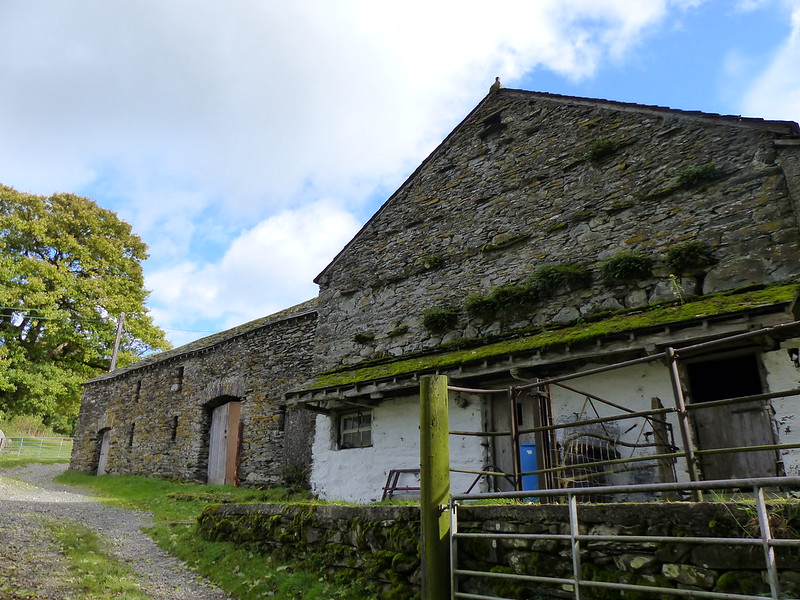 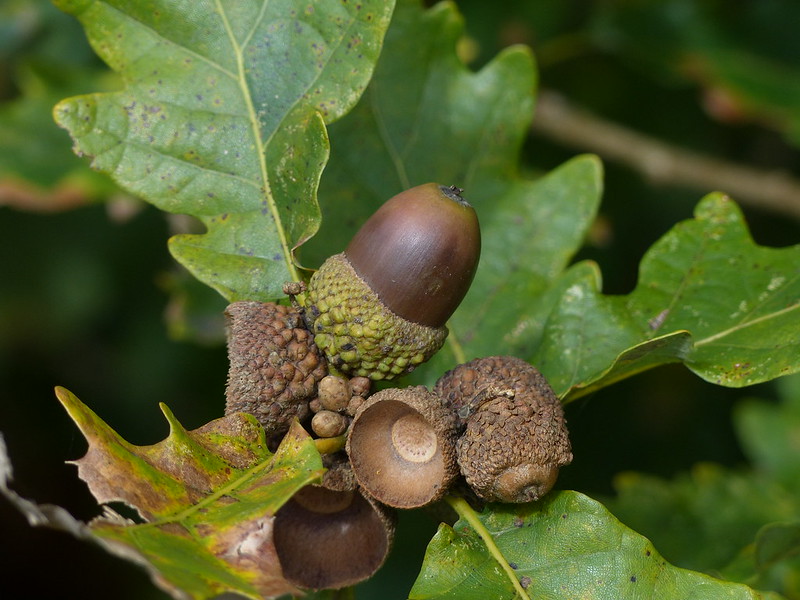 I anticipated having a choice of which bank of the Kent to follow back into Staveley, but the bridge at Hagg Foot was washed away by the floods of Storm Desmond and hasn’t been repaired, so I stuck to the north bank and the woods of Beckmickle Ing. 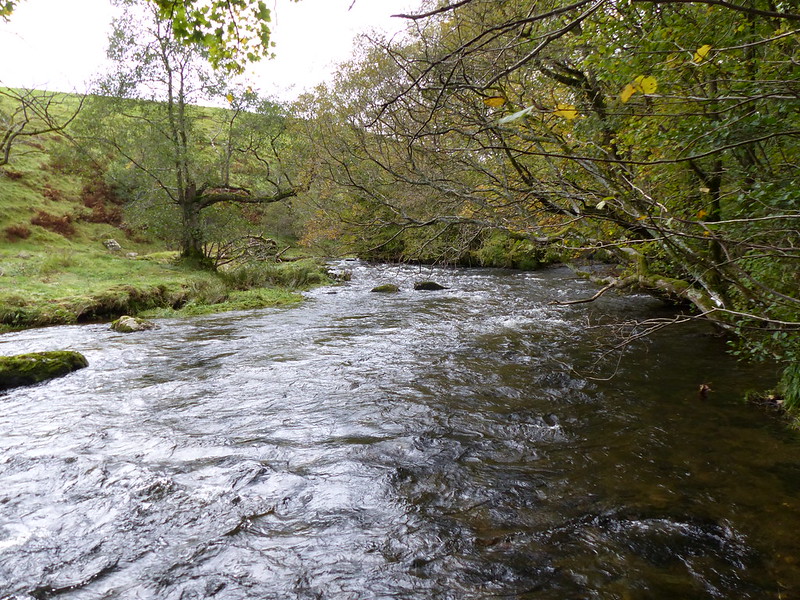 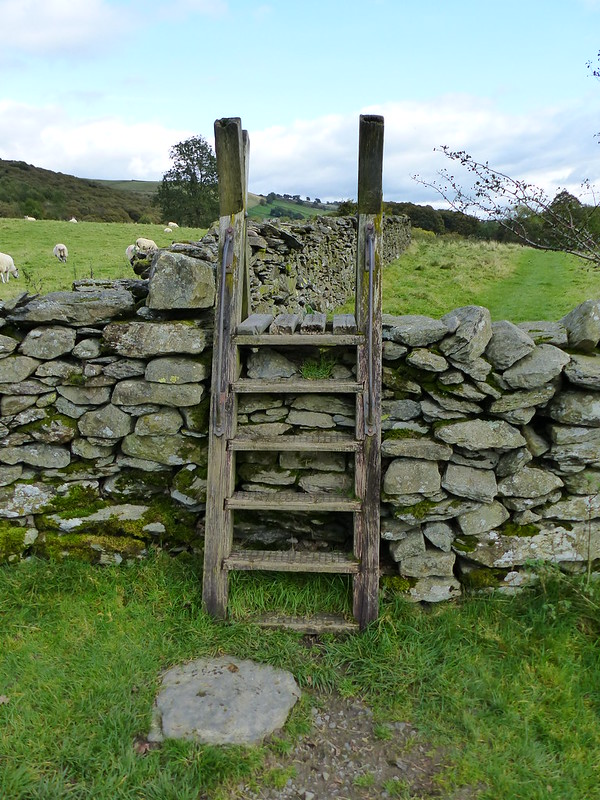 A posh stile with handrails. 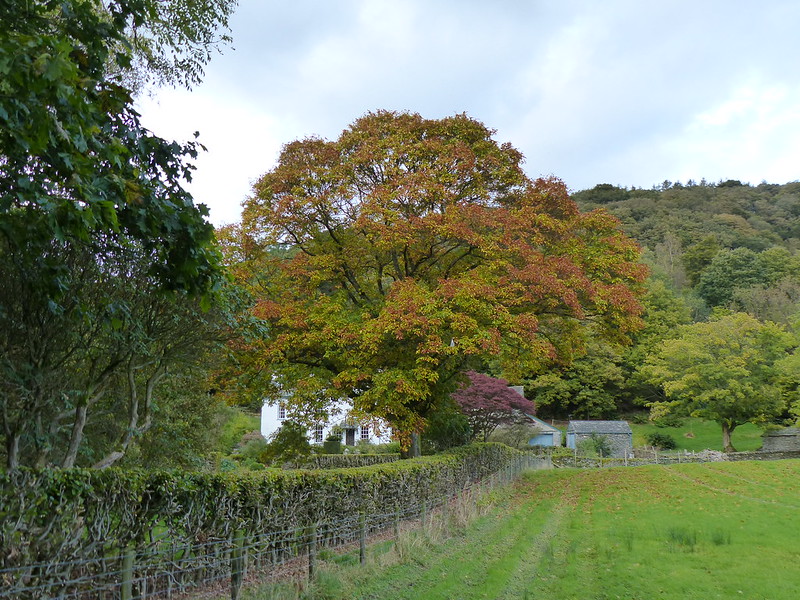 A handsome tree (and house) on the outskirts of Staveley. 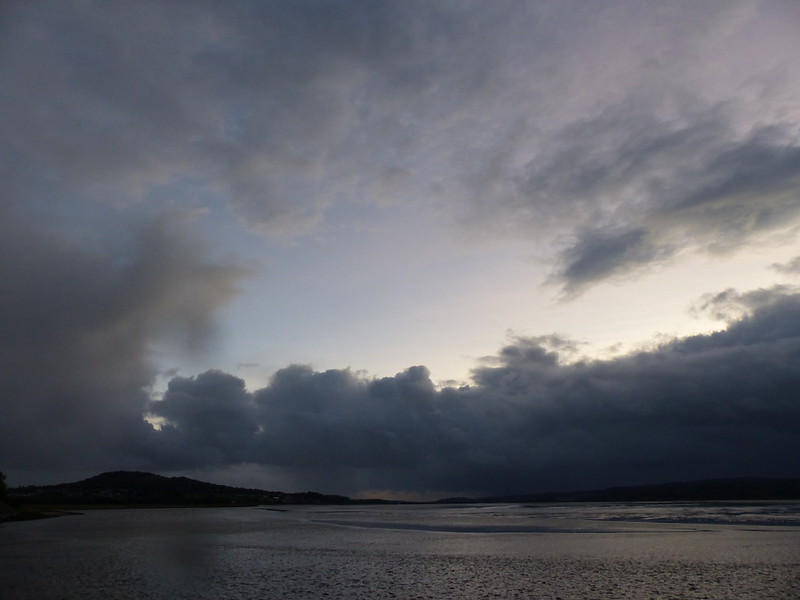 A late wander, along the road bordering the Kent. Dark skies and squally showers, but patches of blue too; gulls and cormorants out on the mud and skeins of geese following the estuary towards the Bay.

“Only the wanderer
Knows England’s graces,
Or can anew see clear
Familiar faces.
And who loves joy as he
That dwells in shadows?
Do not forget me quite,
O Severn meadows.”
Ivor Gurney.
Only the Wanderer 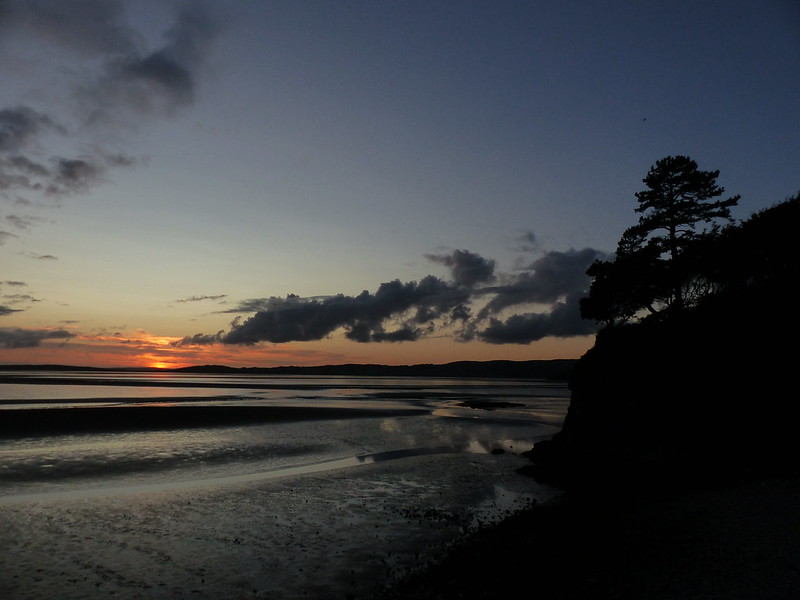 These sunset photos were gleaned from a late wander down to the Cove and across the Lots with the boys and were taken the day after the shots in the previous post, that is at the tail end of September, but have had to wait a lot longer to make it the the blog. 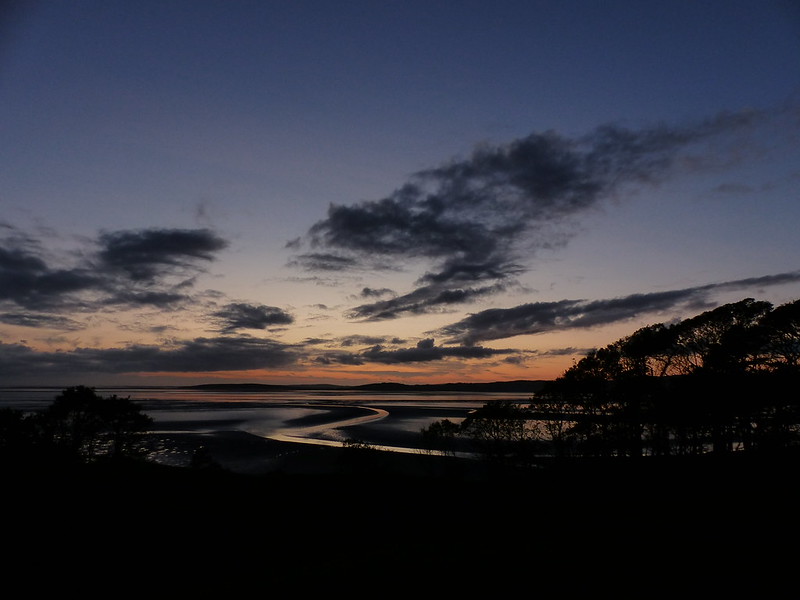 Just so you know I’m still here, bumbling along, snapping away. 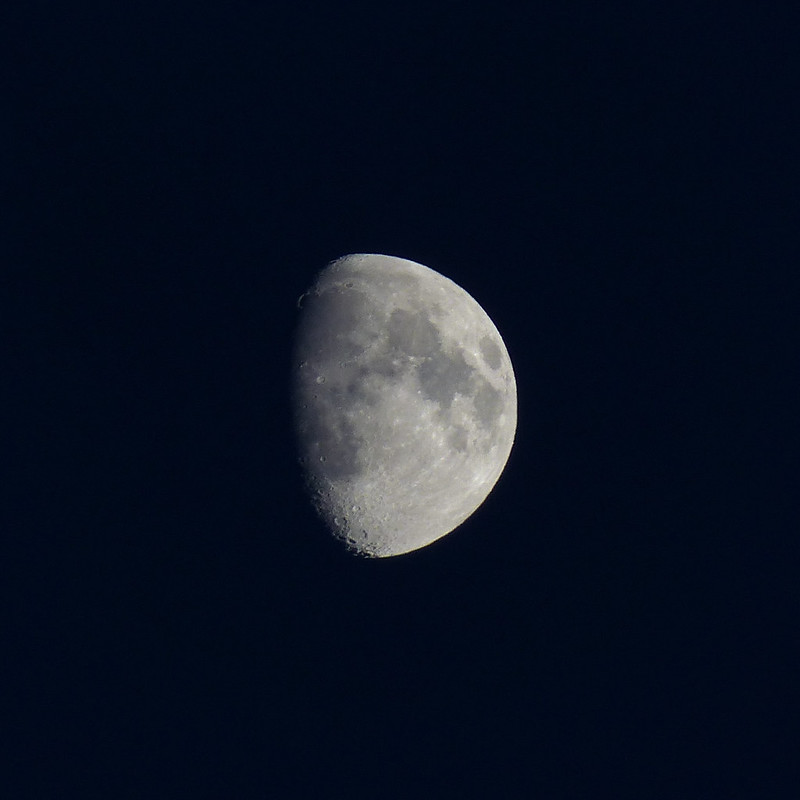