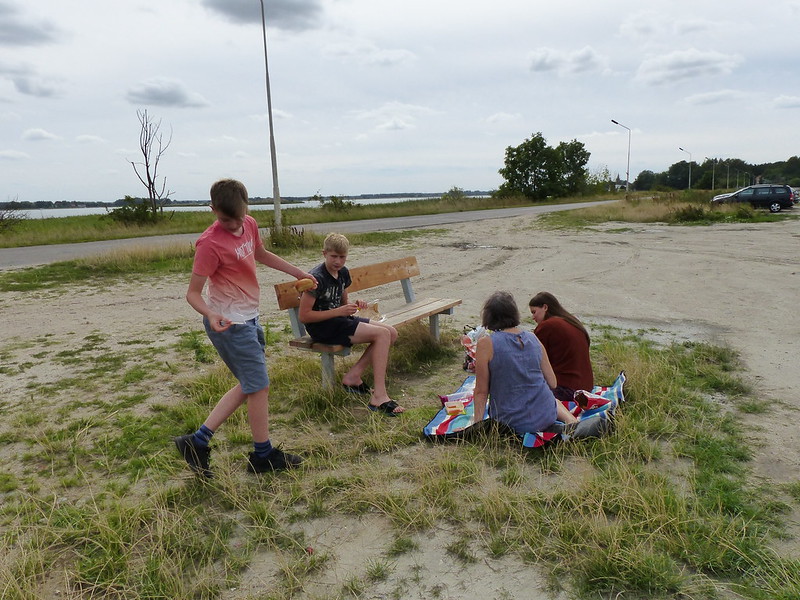 Perhaps I should simply draw a veil over this day, our last in Northern Germany, since it wasn’t a huge success. Our maybe I should post a write up to serve as an object lesson for all cartophiles – incidentally, my spellchecker doesn’t think that’s a word, but I’m very gratified to find that the internet most assuredly disagrees – anyway, a cautionary tale with the moral: you can’t always plan a day out entirely on the basis of a road map.

The problem was that the house we’d booked, lovely though it was, didn’t have wifi, and, I confess, my research prior to our trip had been a bit slipshod and primarily centred around images of the white cliffs of Jasmund. Beyond that I hadn’t thought too far. But the map showed two small islands just down the coast from our holiday home, both joined to the mainland by a causeway, one of which was shown on the map as a nature reserve. What could go wrong?

So, we drove to Riems to find the island surrounded by tall security fences, locked gates and signs which made it clear that visitors weren’t welcome. It seemed as those the island was occupied by some sort of large factory complex.

Hence the rather shoddy, side-of-the-road picnic shown in the first photo. I seem to remember we were still pretty cheerful – we had the nature reserve still to come and we were entertained by the largest flock of Cormorants I have ever seen: 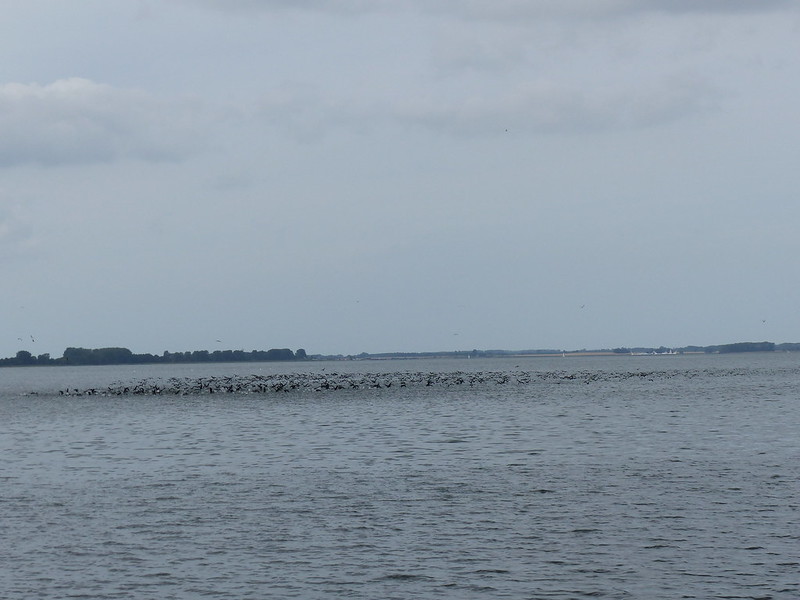 It wasn’t far to our second non-event of the day, but the roads were narrow and a bit confusing and by the time we reached the tiny car park at the edge of reserve I think tempers may have been a bit frayed. 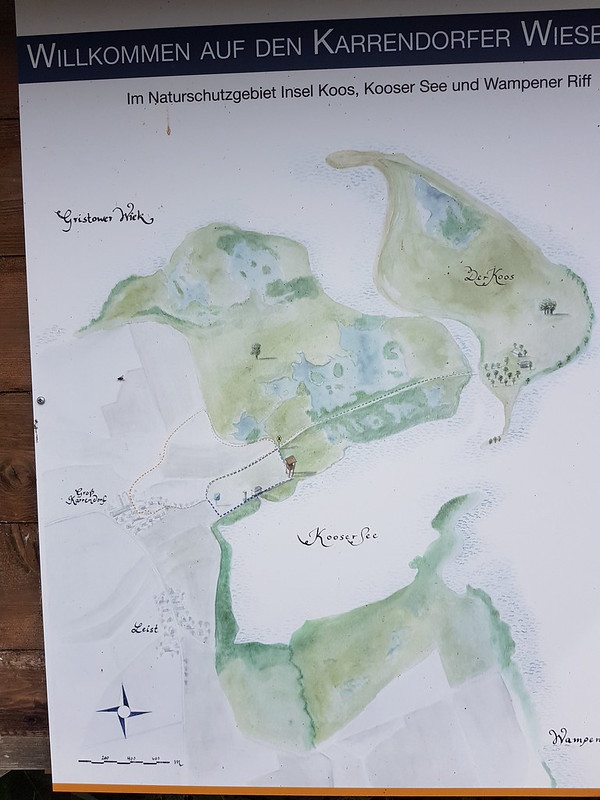 As you can see, the quaint information board showed a path across the reserve to the island of Koos. 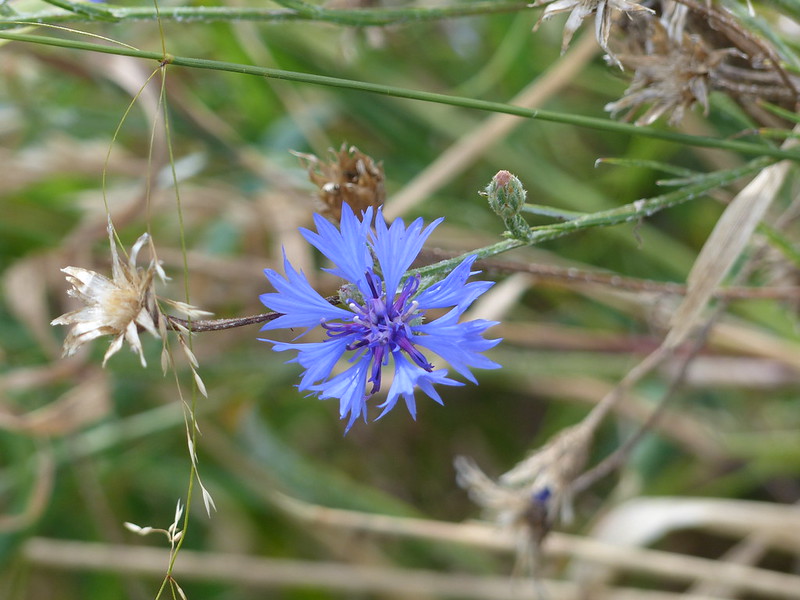 I think that this is Cornflower, not something I’ve seen at home in Lancashire. 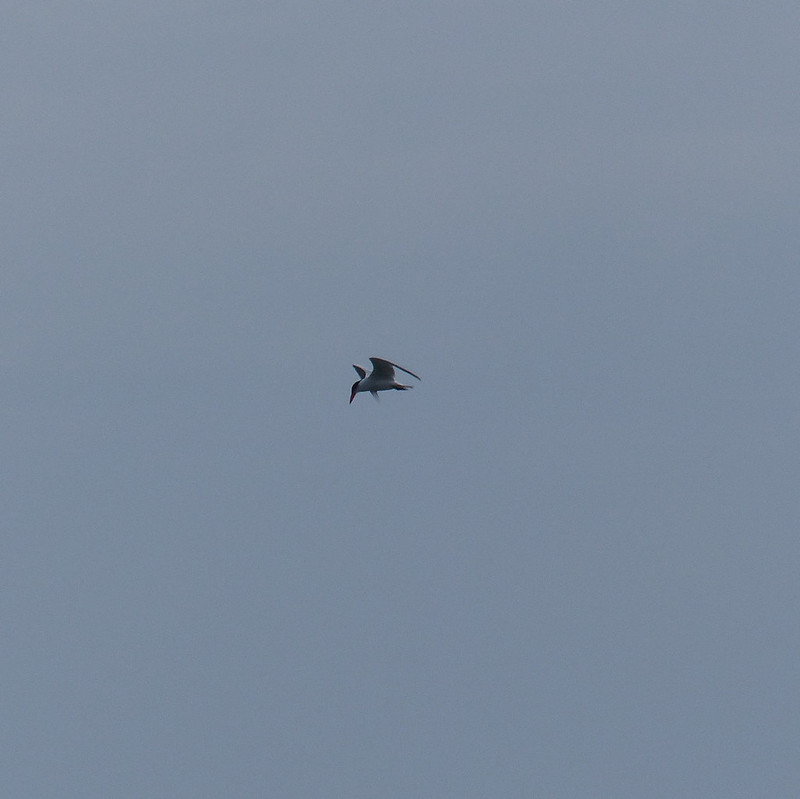 A tern. Not sure which type. 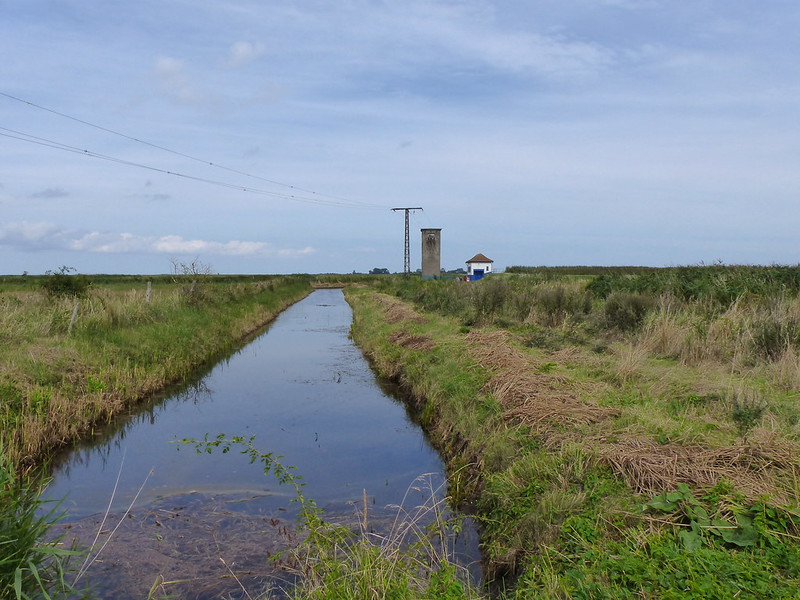 It was a fairly bleak landscape, but the island was clearly wooded and would surely prove to be charming? 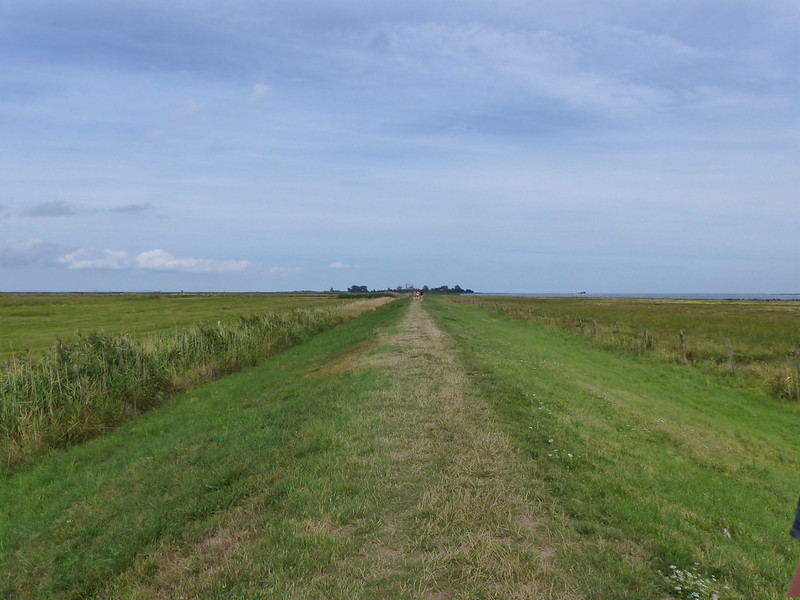 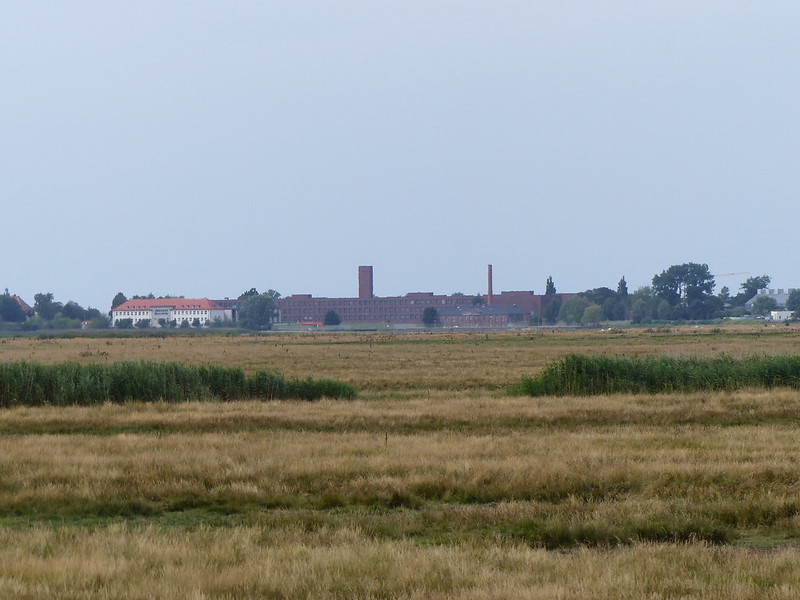 Riems. What a shame we couldn’t get in. 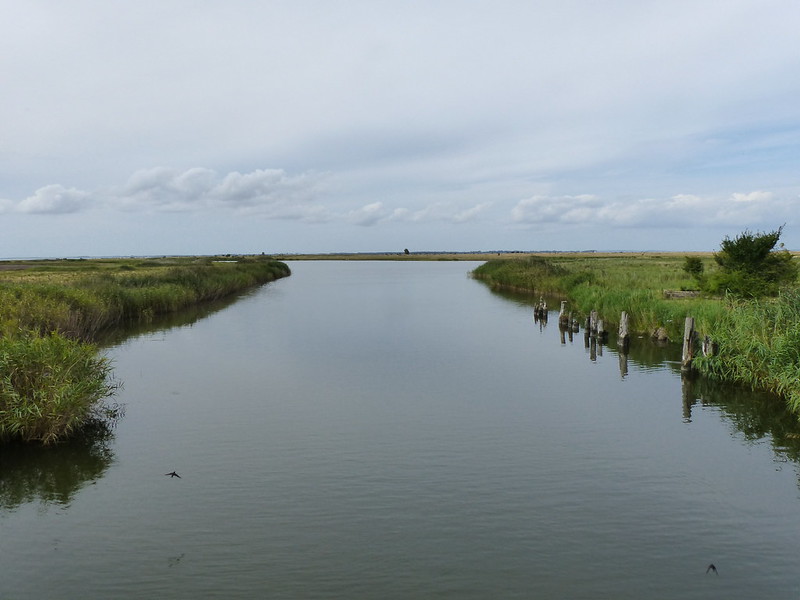 We eventually reached the narrow strait separating Koos from the mainland. There were lots of hirundines nesting on the underside of the wooden bridge.

And the channel was teeming with fish… 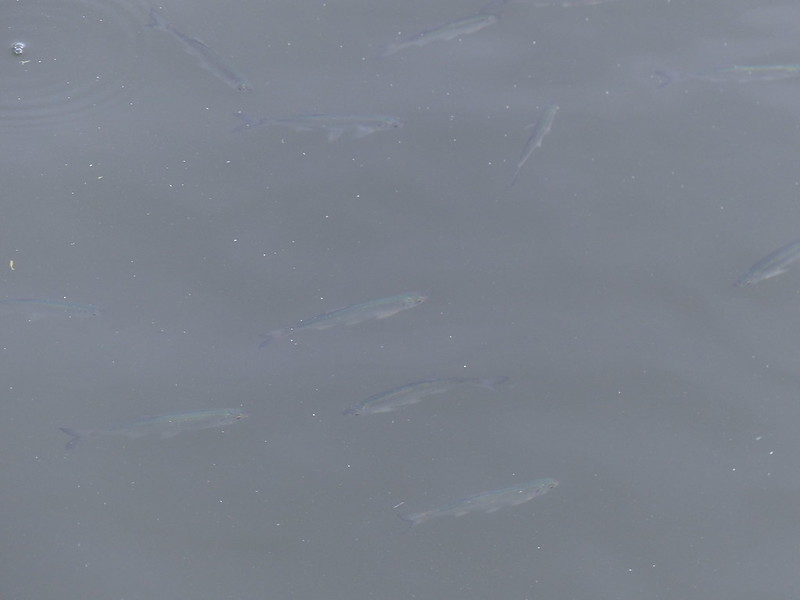 And a Moon Jellyfish – the same kind which the boys and I had swum with a couple of days before. 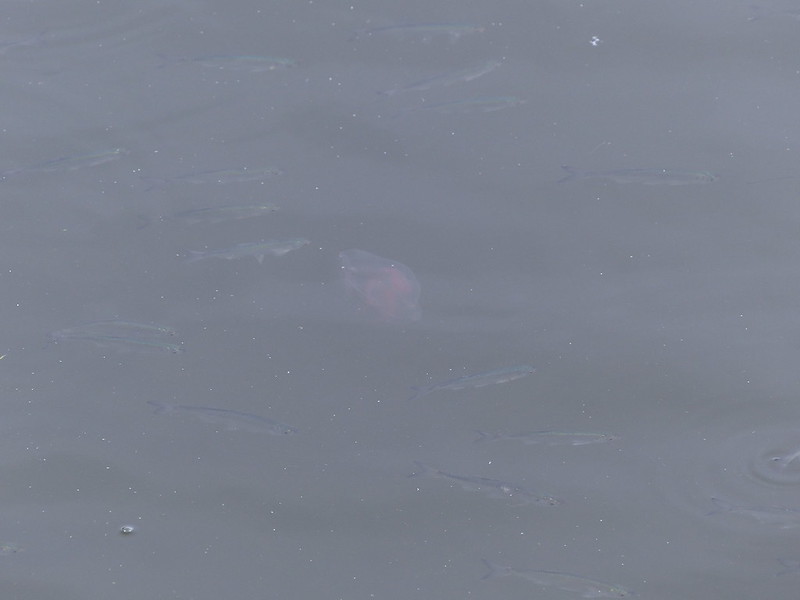 They don’t sting humans apparently, although when I swam in the Baltic as a kid I was convinced I’d been stung, so it isn’t just B who has a vivid imagination. Jellyfish have no blood or brain or heart apparently. People never boast about swimming with jellyfish do they? Dolphins, definitely. Maybe seals? Jellyfish no. Speciesist. 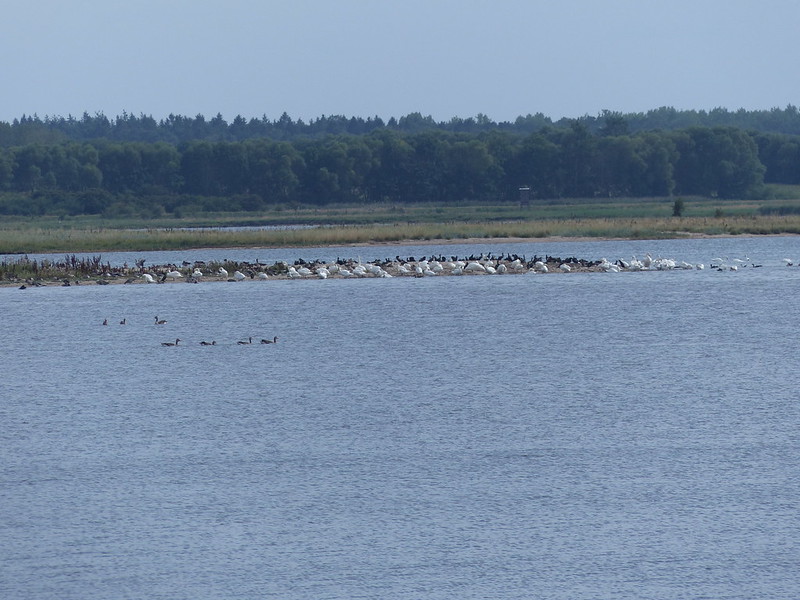 Anyway, just beyond the bridge – high fences and a padlocked gate. Insert your own expletives. We could at least see why this was a nature reserve, there were huge numbers of Greylag Geese, Swans and Cormorants about. 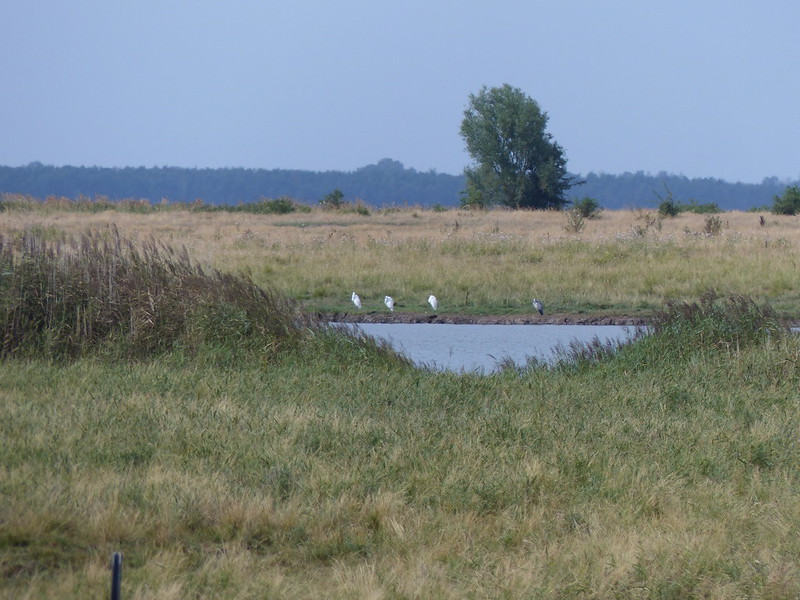 And, I think, three Great White Egrets, judging by their size relative to the Grey Heron nearby.

It was a long trudge back to the car.

The next day we had a lengthy drive ahead, with a considerable detour to my Aunt’s house to collect the many possessions our kids had managed to leave behind. But we weren’t heading home yet…

Advertisement
Locked Out: Riems and Koos

Just back from an extended trip to Germany for a family get together. I took hundreds of photos, but mostly family groups and blurred shots of children on swings. Far too much to tell about a three week trip so just some impressions of our trip. We were in Schleswig-Holstein in the north. Lots of wheat fields, sometimes with poppies.

Lots of Jelly-fish, particularly in the harbours, which is something I remember from previous trips.

Less familiar were the huge numbers of Hover flies and Ladybirds. The latter due to a bumper year for aphids apparently.

The strangest sight was of seaweed washed up on the beach, red with a covering of Ladybirds. Apparently the wind had carried huge numbers out into the Baltic, but some how they survived.

Insect life in general seemed to be thriving. I’ve never seen so many Painted Ladies (although I must confess that I took this photo in the village just before we left)

We saw lots of these colourful little chaps, but I have no idea (yet) what it is.

We had a lovely time, eating and chatting with aunts, uncles, cousins and their kids. My brother and his kids were there for a few days from Zurich, and my Mum and Dad. We spent a lot of time on beaches. It’s nice to be abroad – different weather, different food (TBH is now addicted to Pork in a paprika marinade), different architecture even – brick and timber-framed buildings are common…

With huge roofs extending down to the ground floor, quite often thatched…

I highlight for me was swimming – I love swimming in the sea and our kids are of an age when even modest waves are a great excitement. We swam in a lake a few times too. It was great to see how confident A and B were in the water. It was a lake that I’ve swum in on a few occasions over the years, and the rather wonderful smell of the water was instantly familiar. Perhaps other lakes smell the same way – I wouldn’t know, it was only when I was fully immersed in the water that I was aware of it. Perhaps I should take a leaf out of Roger Deakin’s book and join the trend for ‘wild-swimming’. More anon. Perhaps.