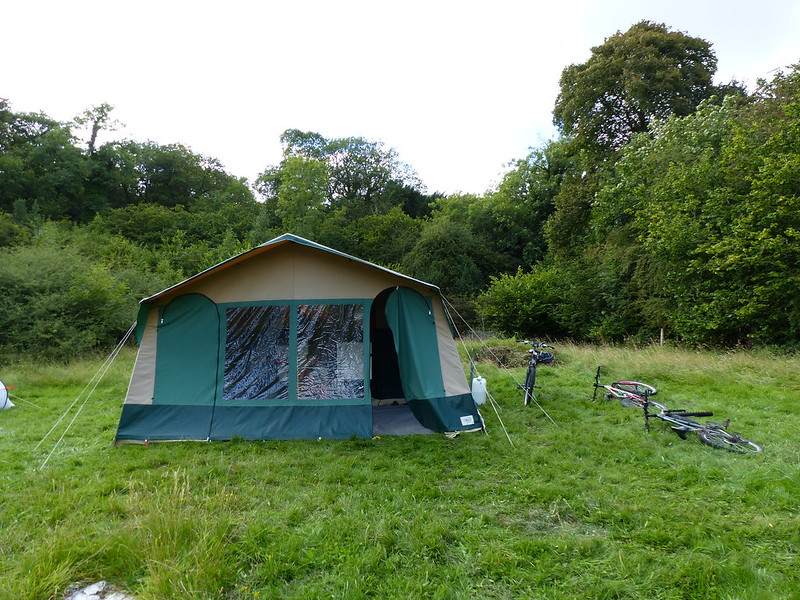 Here is our trusty Conway Countryman pitched at the Silver Sapling campsite. Where’s that? What exotic locale have we chosen for our latest break? Well, er…it’s about half a mile down the road from home. The kids bikes, you’ll note, are strewn across the field by the tent, because they had decided that they would cycle rather than joining us in the car. It’s a Girl Guiding site, but bookable by other groups (although this is not immediately clear from the website). We were there for our friend Beaver B’s* big birthday bash. He’d booked it so that friends from the village could easily attend, but so that friends and family from further afield could also be easily accommodated. A brilliant idea I thought. 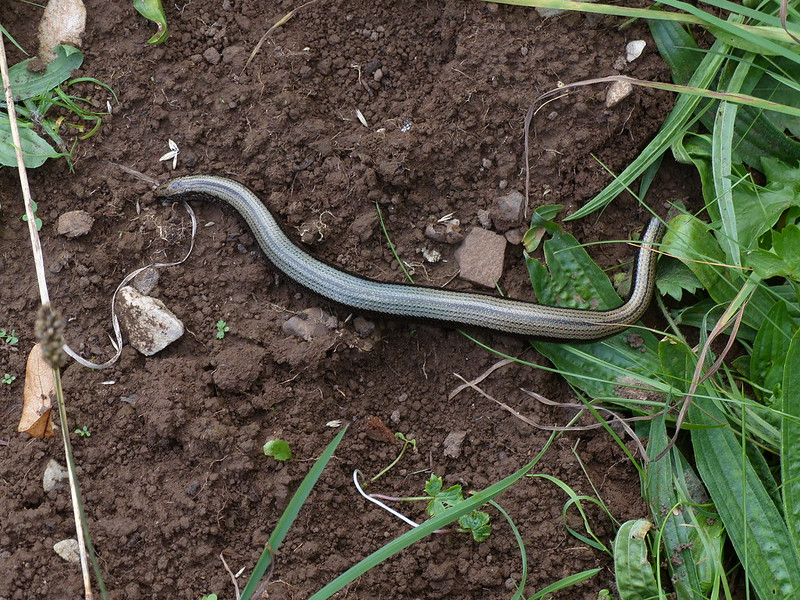 We’d barely started to pitch the tent, in which task B is my principal assistant, when B discovered a Slowworm. It was dead sadly, but that gave us a good chance to examine it closely. It’s scales were gold on its upper-side and it was black underneath.

The weather was a bit mixed. When the sun shone, with trees on three sides but open to the south, the site was a lovely sun-trap. When it rained, we had the marquee to use, to which we added another tent to give a sort of T-shaped affair… 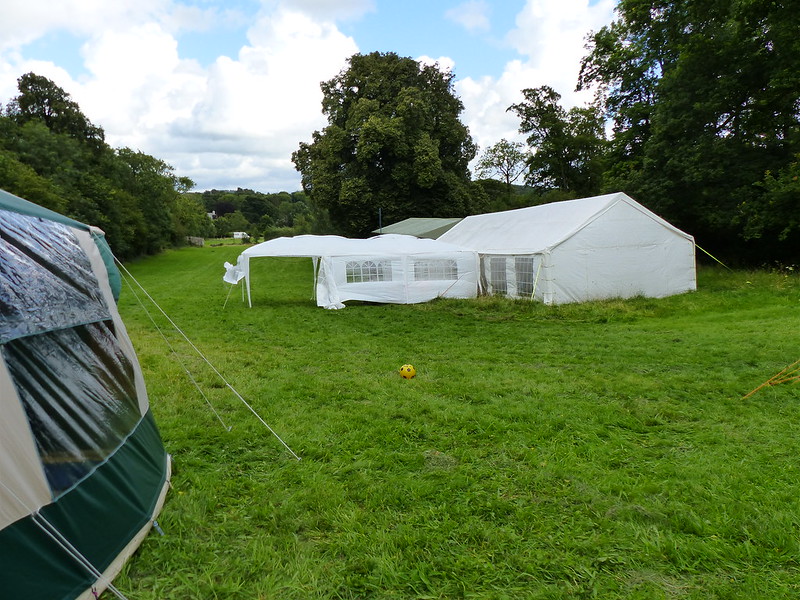 For the kids there are pedal go-karts, grass sledges, giant jenga, and giant kerplunk (all provided on site), plus badminton, footballs, frisbees and bikes which we’d brought ourselves. There are huge barbecues and fire-pits on site too, which got good use, as well as a place where it’s okay to have a larger fire. Beaver B had ordered in a barrel of Tag Lag beer, which is brewed at the Drunken Duck near Windermere and proved to be very palatable. 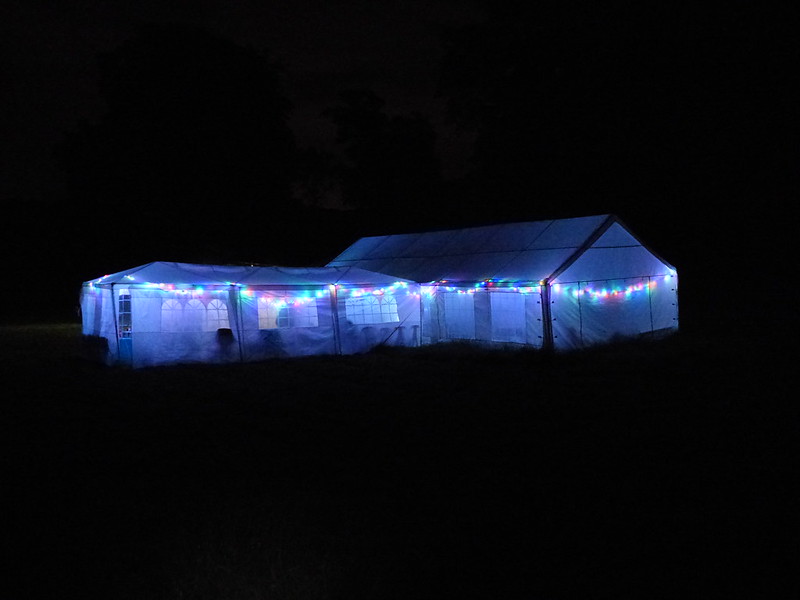 Most importantly, there was lots of good company, both old friends and some we hadn’t met before. A fine time was had by all, I think. I certainly know that I enjoyed myself enormously. 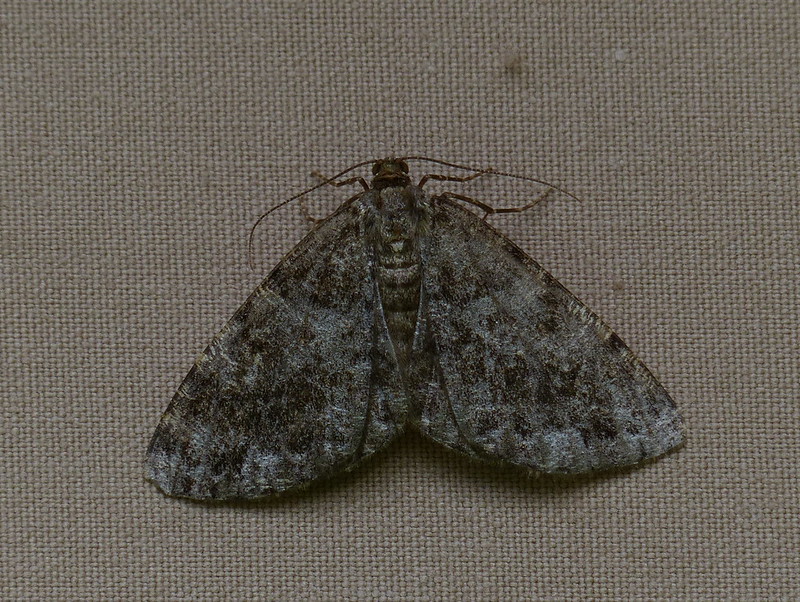 We had a couple of visitors to our tent over the weekend. On the Friday night there were some comedy attempts to photograph a quite striking green cricket using flash photography (the results are predictably blurred). The following morning I spotted this moth on our awning. There is a species of moth called the Mottled Grey. Since this moth is both grey and mottled, maybe that’s what this is.

In all, a fabulous weekend. The camp site can be booked in sections (as we did) or the whole thing can be block booked (every year a group of bikers have a charity weekend and concert here for example). It can also be booked for daytime use. You only pay per camper. Why not give it a try?

*When Beaver B has appeared here previously, I think he has just been B, but, obviously that gets confusing with our own B. I’m not sure that he will be too enamoured with this sobriquet, but it is how we make the distinction at home, since Beaver B helped run the local Beaver unit when our own B and S were members.