The end of March, and another meet up of our little group of hill-walking friends, expertly organised, as ever, by Andy, even down to finding a perfectly situated little parking area just off the Fair Mile Road in the Lune Gorge. TBH had driven and, as navigator, I had chosen to bring her the most direct way, over the very, very narrow Crook of Lune Bridge*, a choice of which she thoroughly approved, in no way castigating me for my decision or filling the car with invective as she gingerly inched across.

(*Confusingly, there’s another Crook of Lune, near to Caton, much further down the river)

Andy had a box-ticking exercise in mind, wanting to visit a couple of tops which were new to him, but fortunately his route was also a very pleasant walk, so we’ll let him off.

Little S had joined us, mostly, I think, due to the promise of a slap-up meal in Lancaster after the days exertions, and he was appalled by our determination to stop approximately every ten yards for a natter/breather/photo opportunity.

Little S wasn’t overly impressed either with the long stop we had on Linghaw, ostensibly for drinks and snacks, but quickly becoming a sunbathing/snoozing stop.

The hill behind our little group here is Grayrigg Forest, which we visited together not so long ago, on what was probably another box-ticking exercise. The weather had been a bit grey that day, but this time we had struck it lucky with plenty of sunshine and blue skies.

I think of Fell Head as a favourite spot because it’s a great viewpoint, and I used to bring a packed tea up here after work during the few years I lived in Arnside. In my head, I did this many times, but since I only lived in Arnside for four years and the window when the evenings are light enough is quite short, and because I think of other hills with much the same affection, for the same reasons, I suspect I only actually did it a couple of times.

Anyway, back then I would sit and eat my tea, and watch the traffic far below on the M6 and then head back to my car, but we had a ridge to traverse…

We had an even longer lunch/nap stop on Height of Bush Howe, which was very relaxing, but which had the consequence that, with a table booked in Lancaster, we didn’t have time to include The Calf in our circuit, and we also needed to get our skates on to get back to our cars.

A great days walking, in fabulous company. The meal later, at Molly’s in Lancaster, was equally good. The night before, TBH and I had been at a Northern Soul night with our neighbours, and the day after a few of us met for another sunny walk. A perfect weekend!

MapMyWalk tells me that we walked 10.39km, but the map itself seems to be implying more like 12.4 – I’ve noticed discrepancies like this before. Maybe it’s my fault for pausing the app. It also gives 560 metres of ascent, which seems about right. 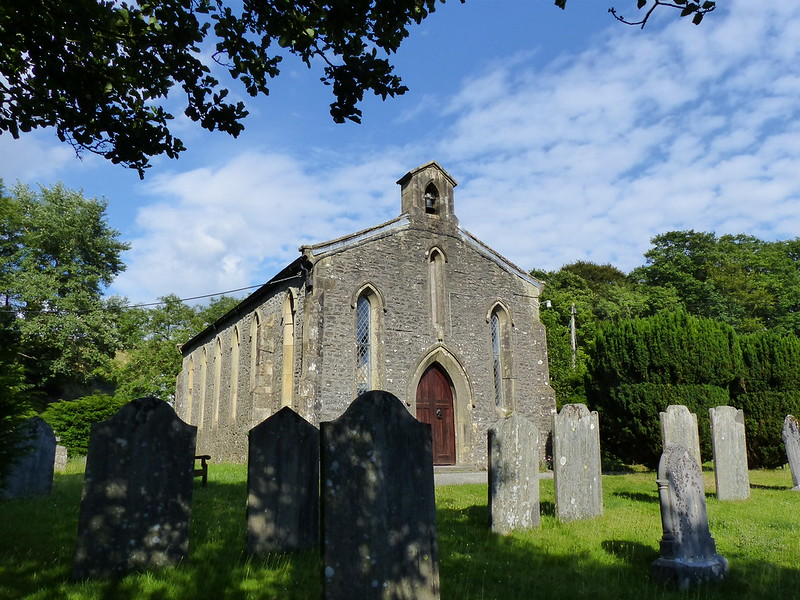 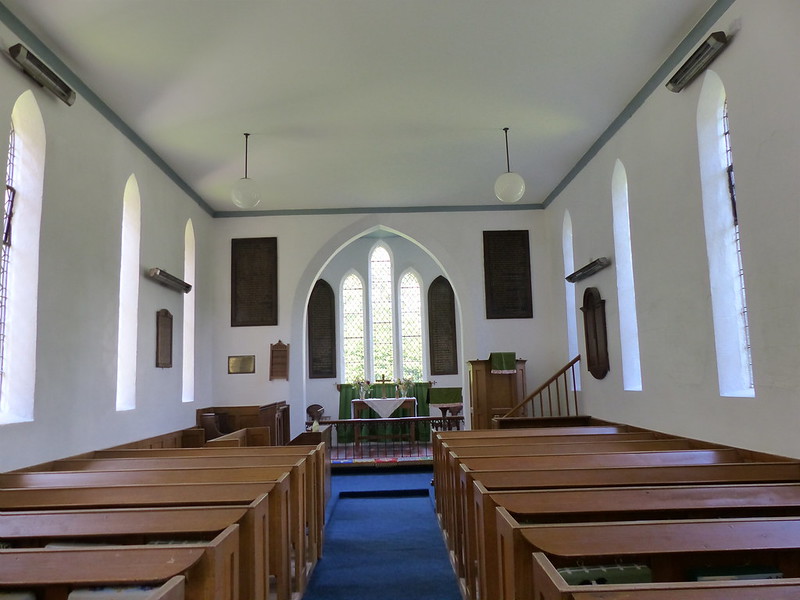 I was surprised by the plain white interior – English churches are usually so austere that they don’t stretch to plaster or paint. It was only built in 1839, but a board inside suggests that there’s been a chapel here for much longer… 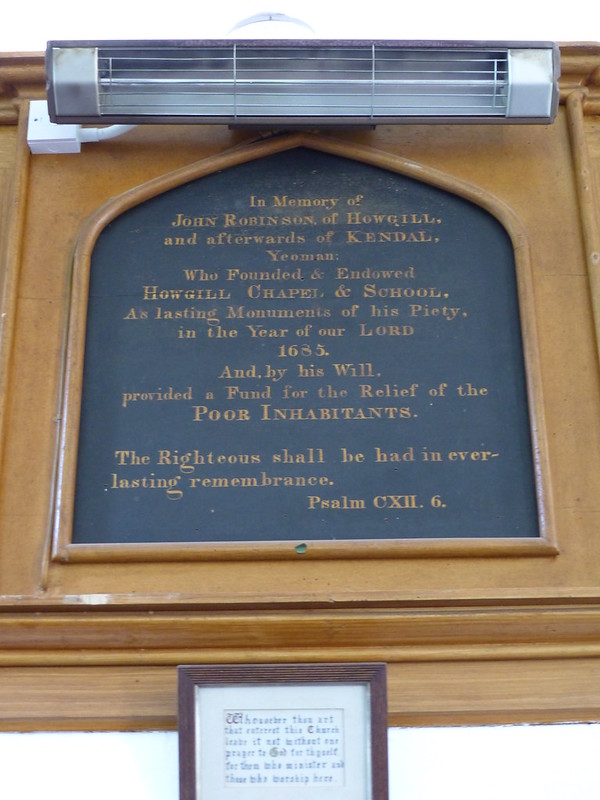 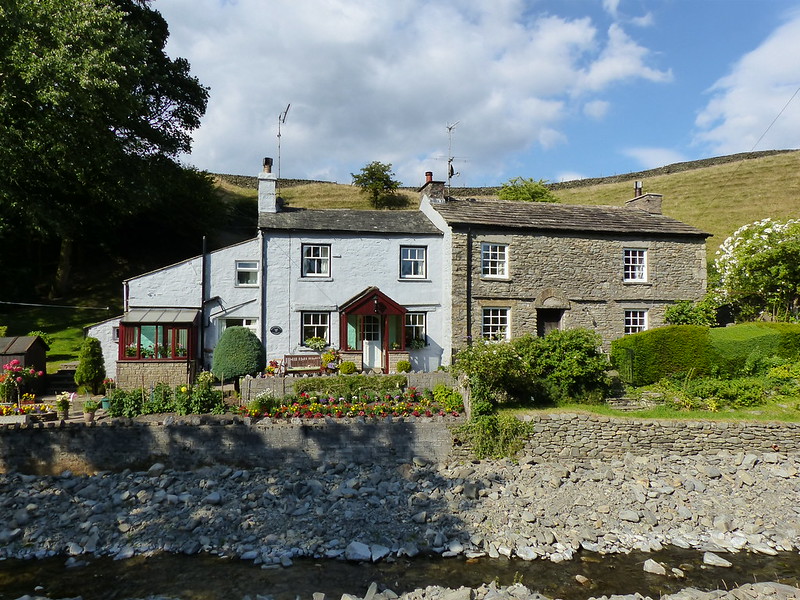 …on the far side of Chapel Beck, was once itself the chapel. 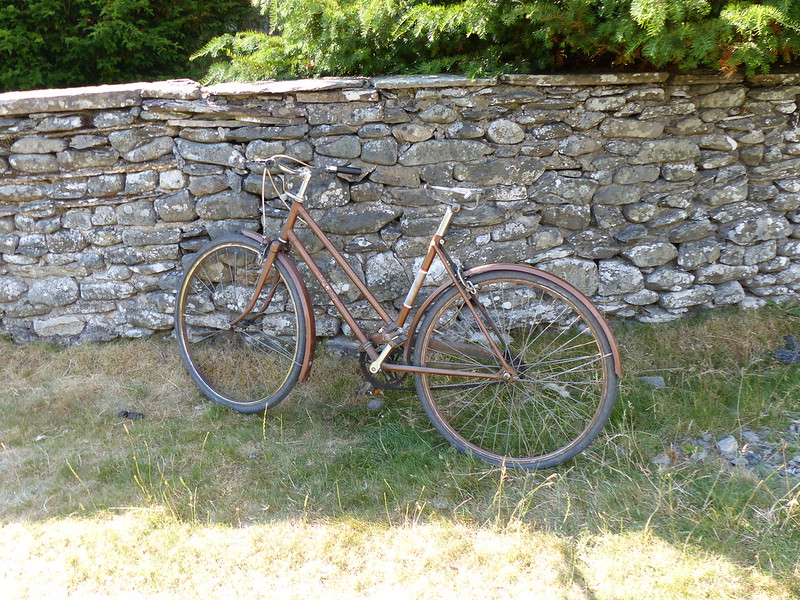 I was intrigued by this bike, which was propped up by the church; it looked to be in working order, but the saddle, whilst it has springs, has no cover.

This was the evening after my Langdale swimming excursion. The forecast had been once again good, but in actuality there was a good deal more cloud about. In fact, as I drove along the M6 towards the Howgill Fells I was a bit taken aback to see that the sky behind them was absolutely black – it looked as though an almighty thunderstorm was on the way and I didn’t even have a coat with me. Fortunately, by the time I’d parked in the tiny hamlet of Howgill, the skies had cleared considerably. 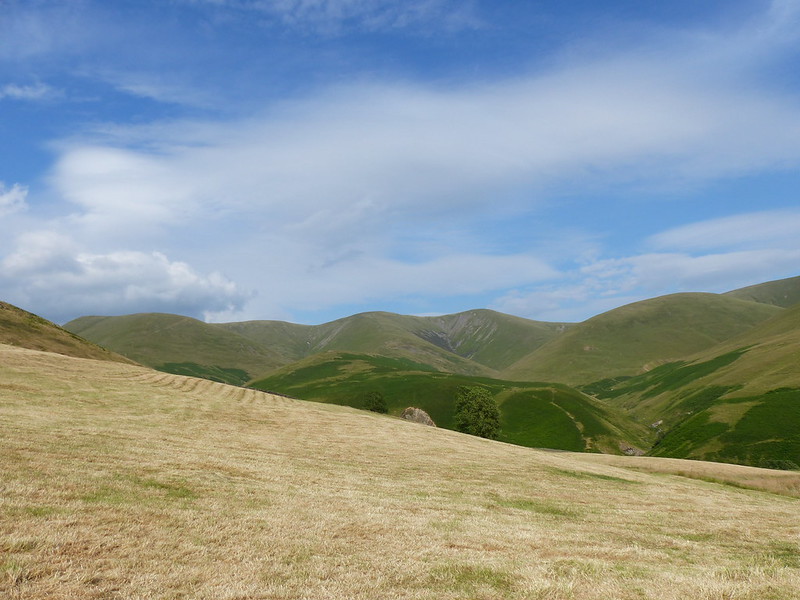 If you look at the map of my route at the bottom you’ll notice an apparent loop at one point, which is where I made a navigational error. I crossed the parched field above when I shouldn’t have, leading me to a gate with a sign on its far side saying ‘Private No Access’. This wouldn’t have been so terrible if I hadn’t been attracting the attentions of a particularly persistent Buzzard. The first time I was strafed by an angry Buzzard was in 2010, so I managed 44 years without ever upsetting any Buzzards, but these days I almost expect to be harassed by them when I’m out, it happens so often. I’m beginning to feel paranoid about it. This one adopted different tactics to any of the others – swooping toward me several times in three separate places, and after the first relatively mild shot across the bows, which was preceded by a few warning kew, kews, it came silently and, on one occasion, from behind. The last time, I could see it way across the valley… 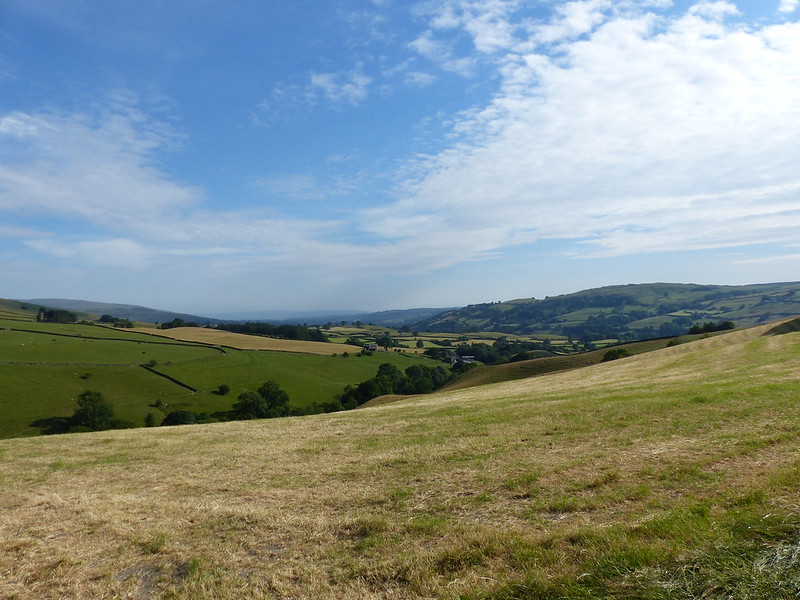 …and then watched it come back on a bee-line straight towards me, at eye-level, which was a bit disconcerting. I suppose the fact that this has happened several times without any injuries on my part should be reassuring, but, in the moment, that didn’t occur to me, and I took to my heels, which I’m sure was all very amusing for anyone who saw me from the nearby farmhouse of Castley. 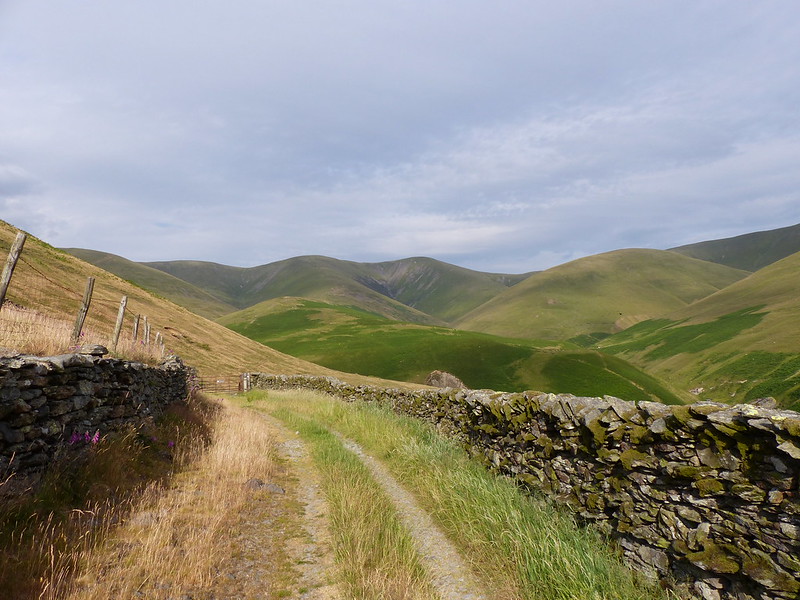 …is the path I should have been on. 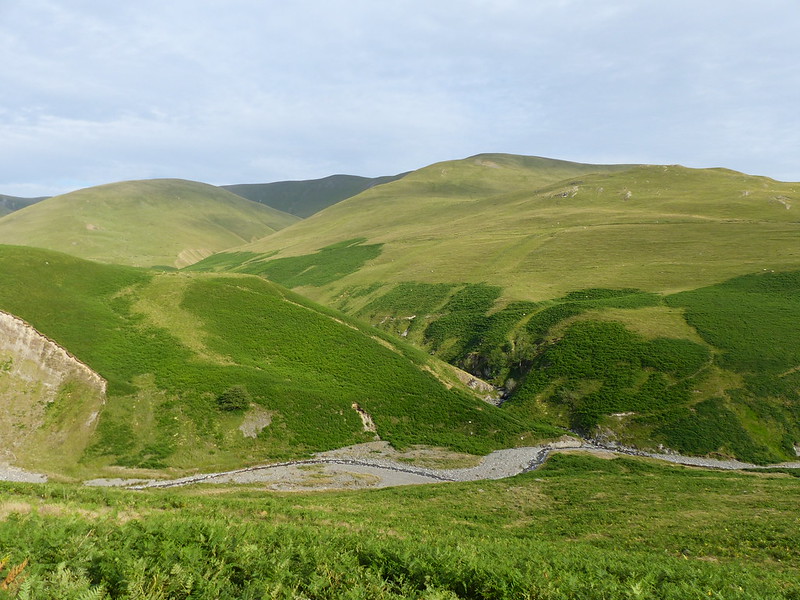 …is where Bram Rigg Beck and Swarth Greaves Beck flow into Chapel Beck which ultimately flows into The Lune. Chapel Beck is also fed by Calf Beck, Long Rigg Beck, Stranger Gill, Crooked Ashmere Gills and Long Rigg Gill all of which ultimately feed the Lune. You can perhaps tell from the photo that I was quite a way above Chapel Beck, but sadly the path forsook all of that hard-earned height and dropped down to cross the stream, and, even more sadly, I went with it…. 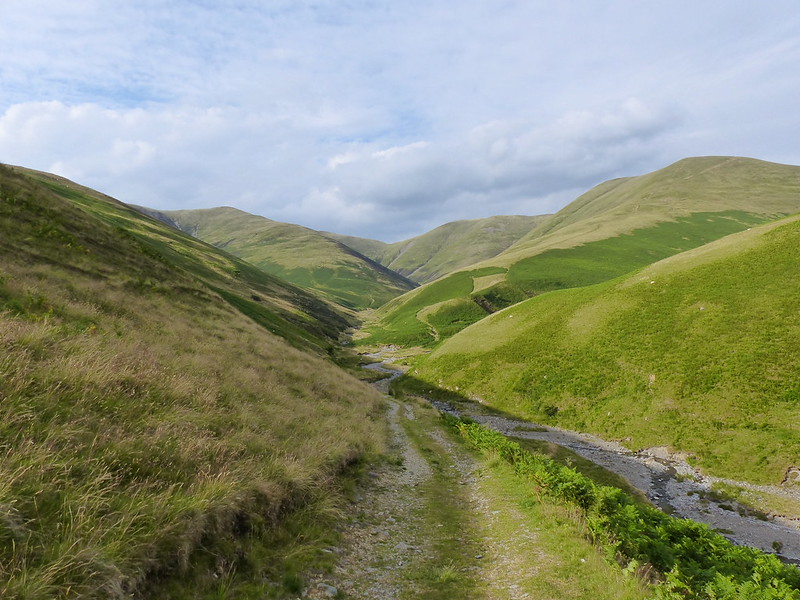 …to climb White Fell, that long shoulder stretching away on the right of the photo.

It was a long, hot and sticky climb, enlivened by more views of a Buzzard, who, this time, was more interested in hunting prey than in persecuting me. 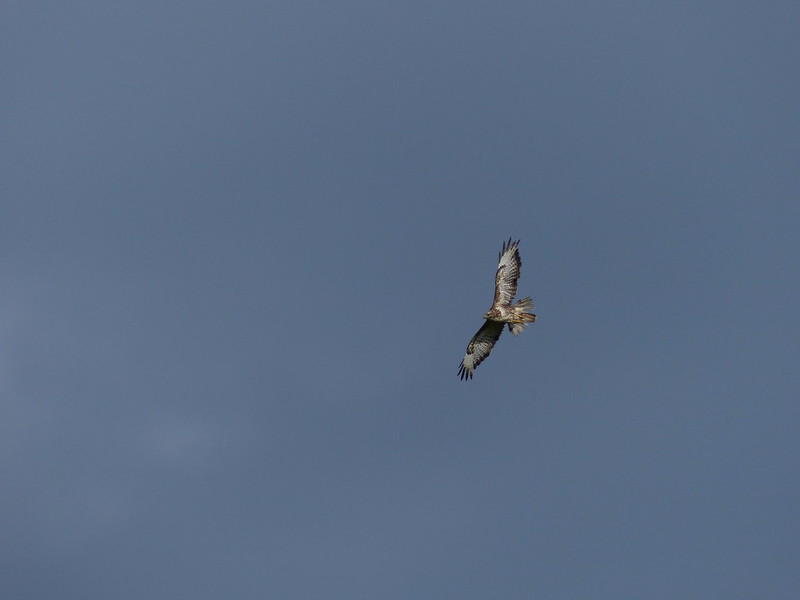 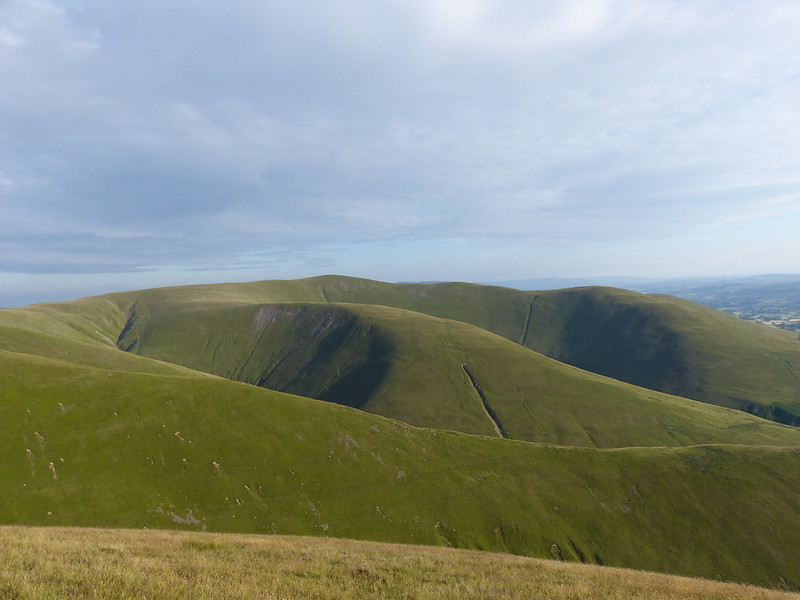 Arant Haw. The right hand ridge is my descent route. 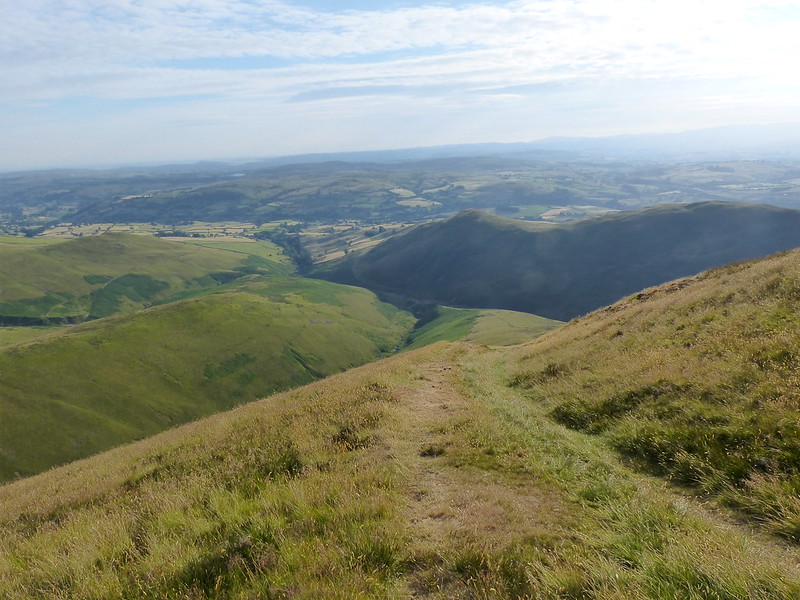 Looking back down my ascent route to the Lune valley from near the top. 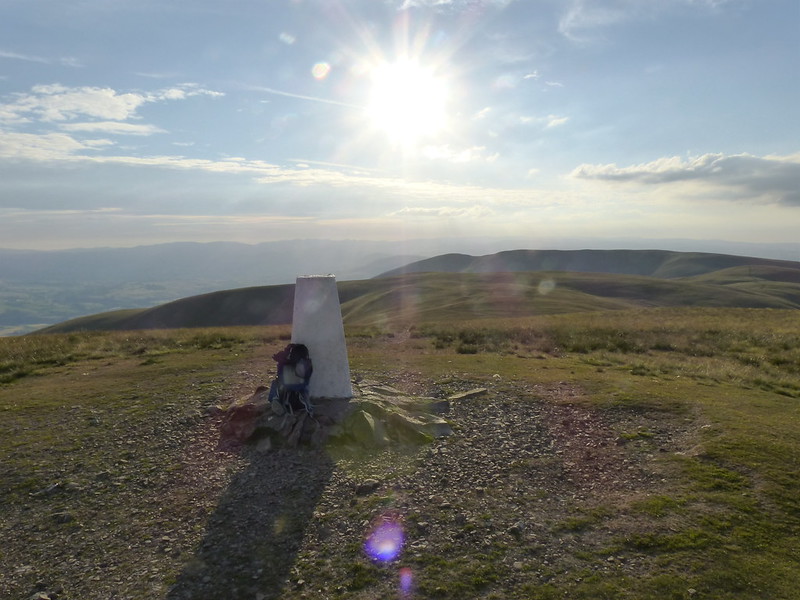 The small tarn close to the summit of Calf Top was completely dried out. 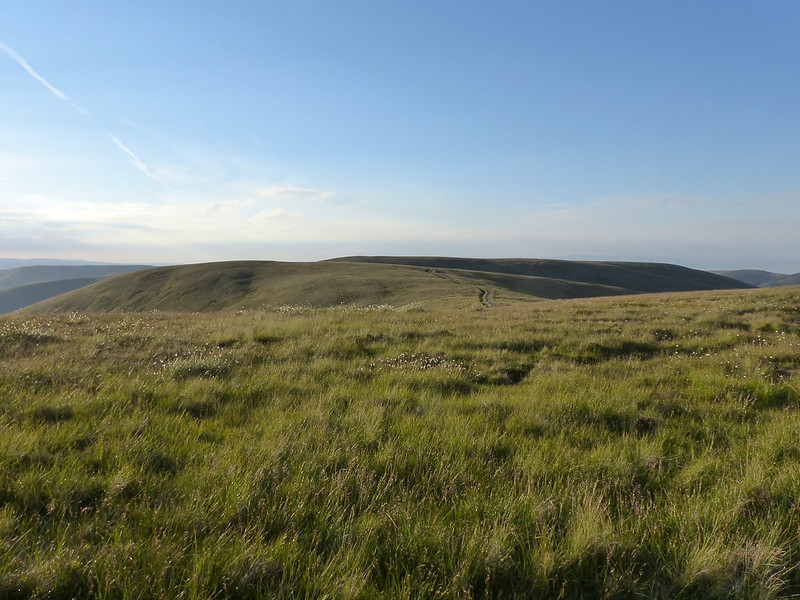 Looking back to Calf Top from Bram Rigg Top. 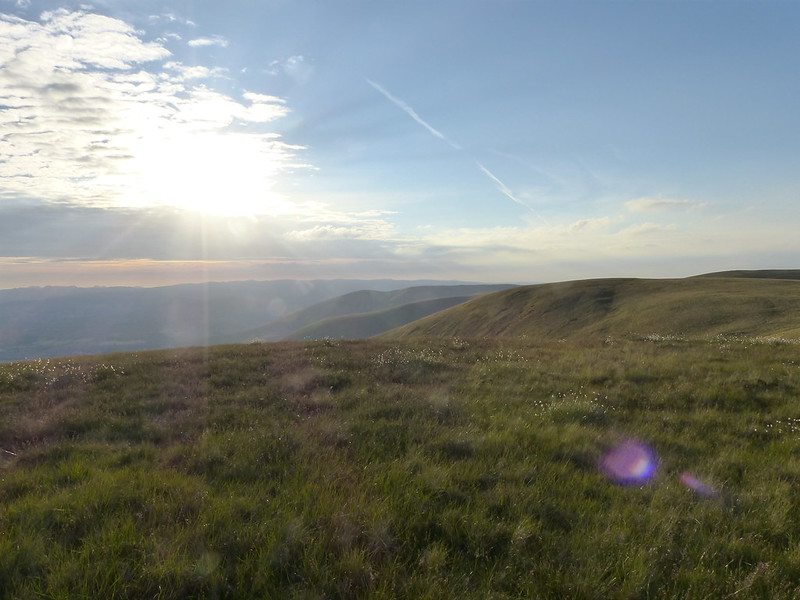 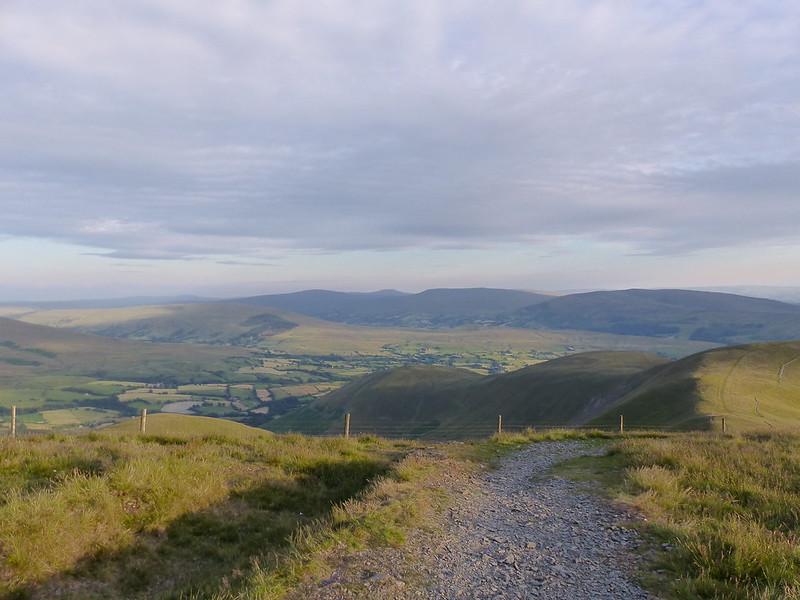 The Three Peaks from Calders. 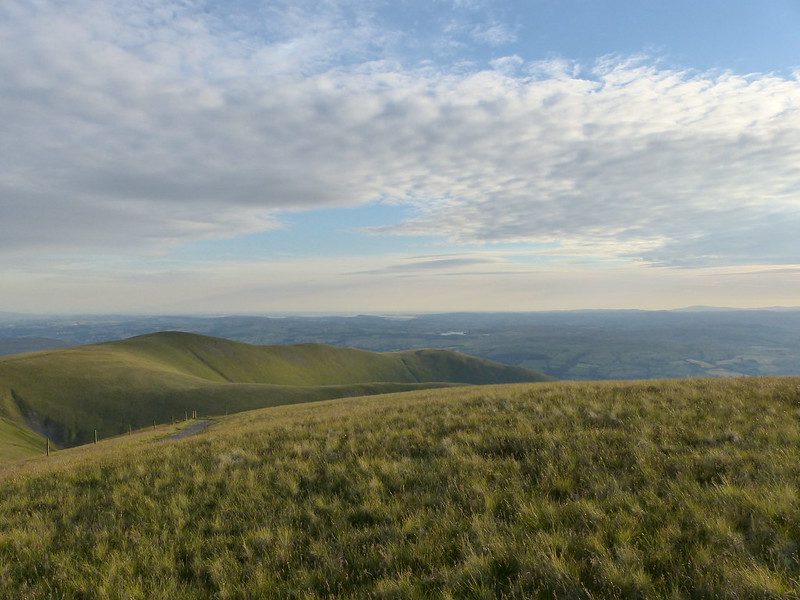 Arant Haw from Calders. Black Combe on the right-hand horizon, Arnside Knott and the Kent Estuary in the centre. The lake in the distance is Killington Lake.

Clouds massed again and it got a bit gloomy, but the Lakeland Fells, although quite distant, seemed very sharp and individual hills, like the Langdale Pikes and the Scafells and Great Gable, stood out clearly… 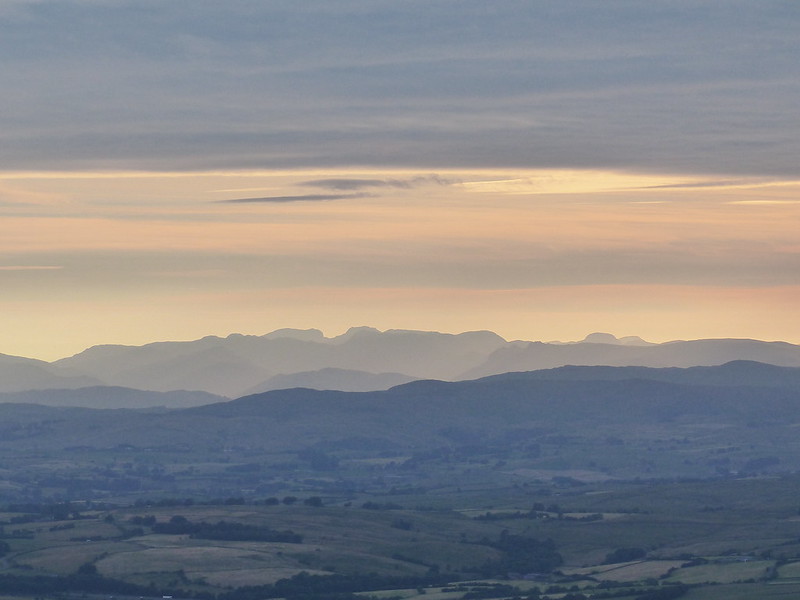 The Eastern Fells are not quite so distinctive… 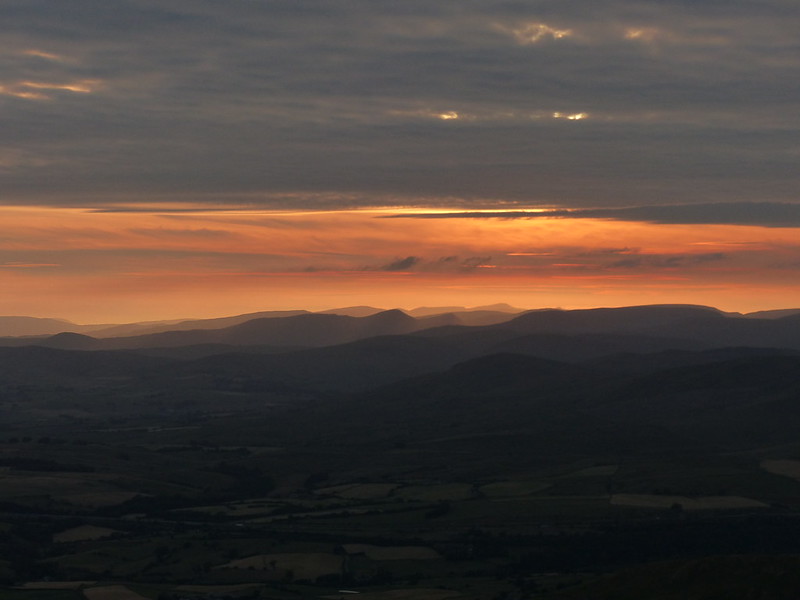 It was getting quite late now, but the sun had dropped below the level of the cloud and the views from Arant Haws and, better yet, from the ridge off Arant Haws were stunning. 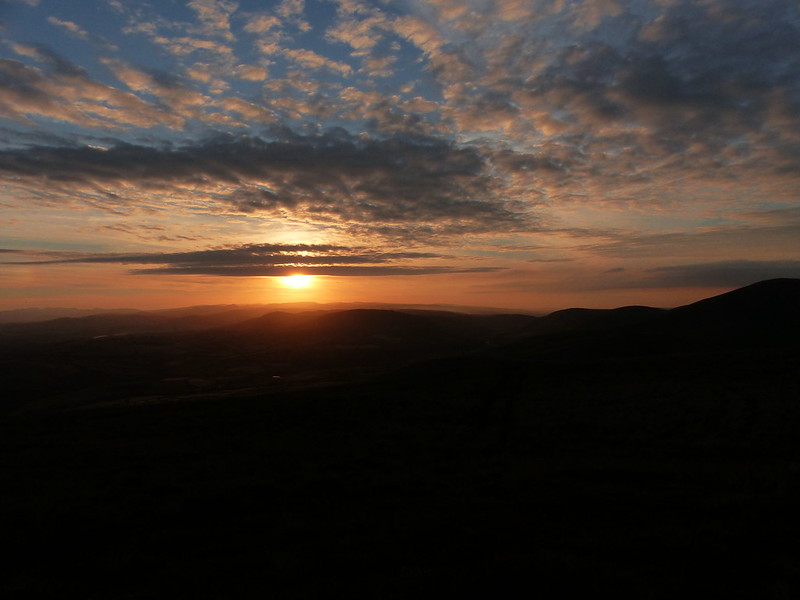 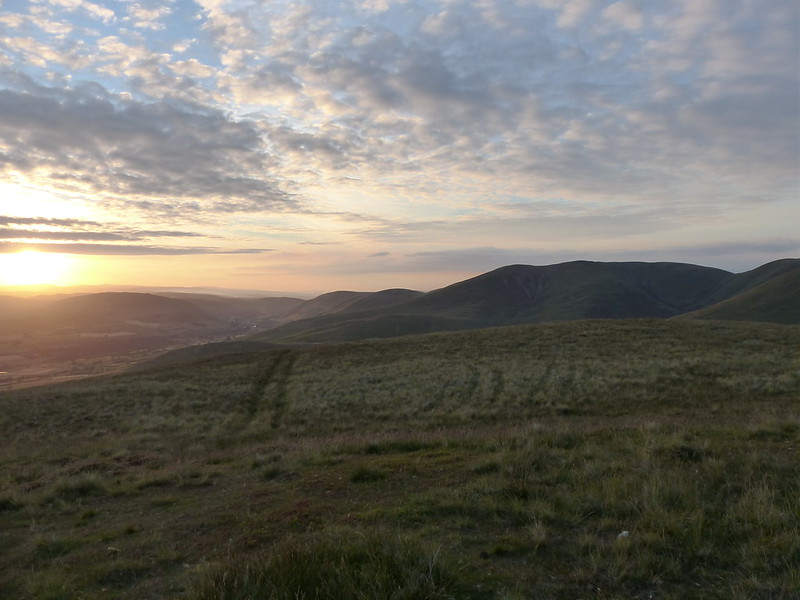 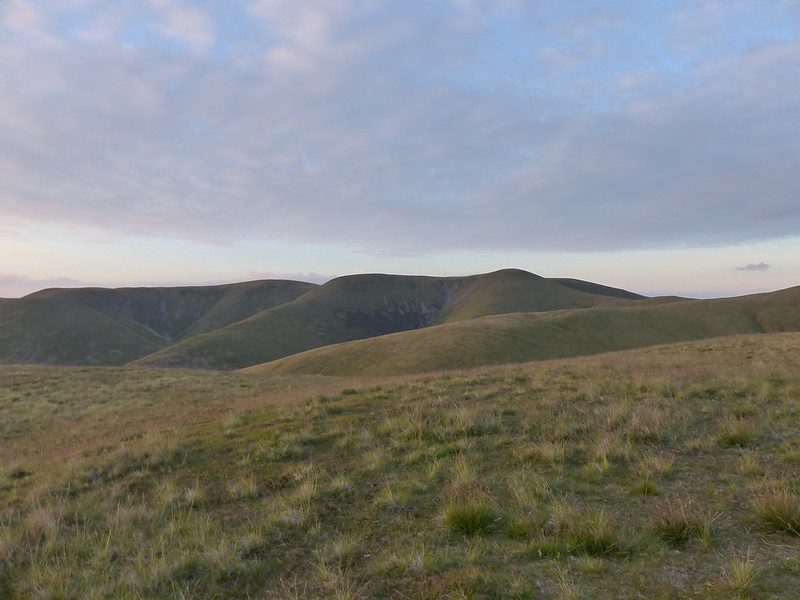 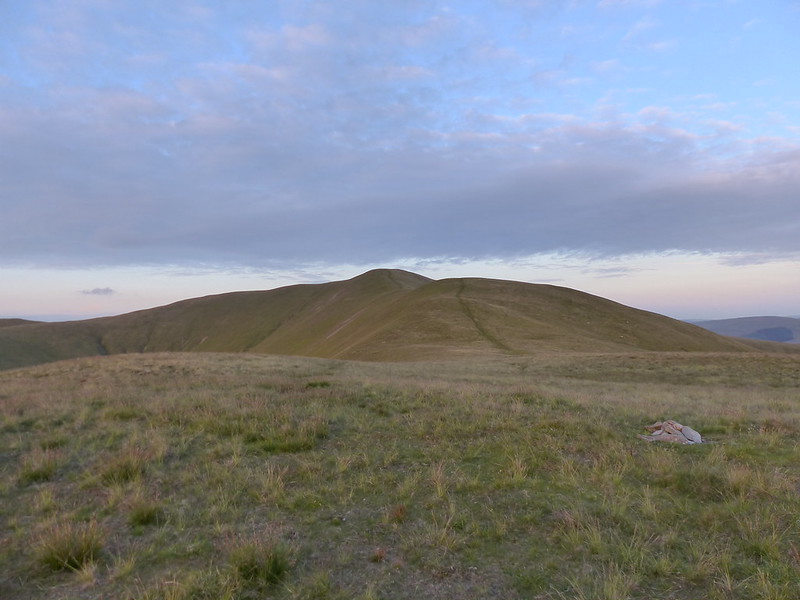 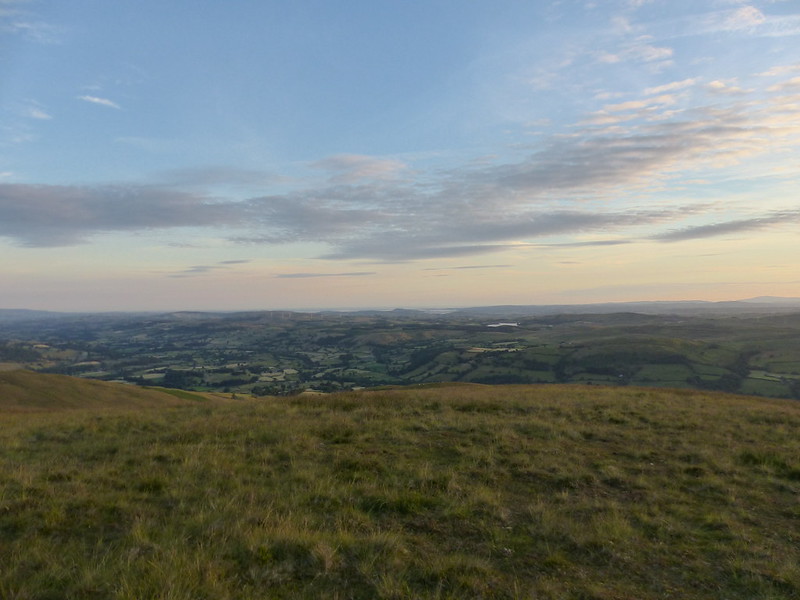 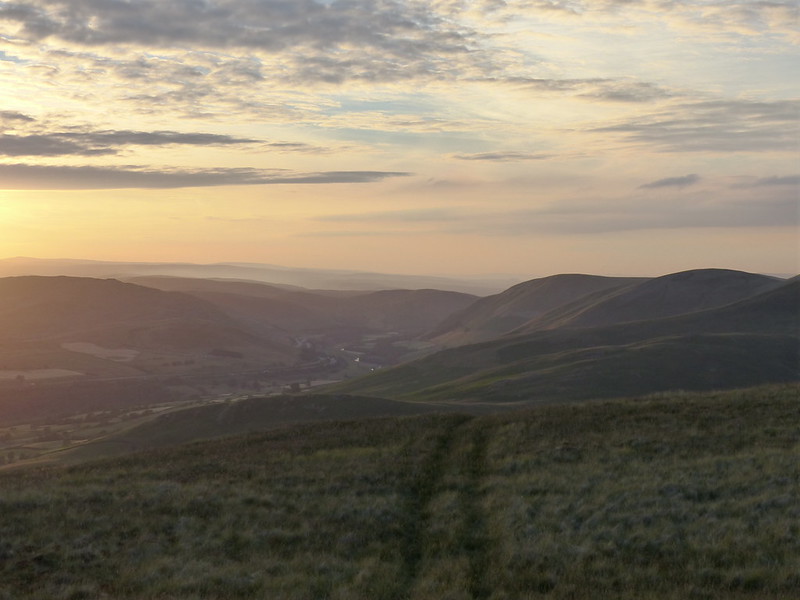 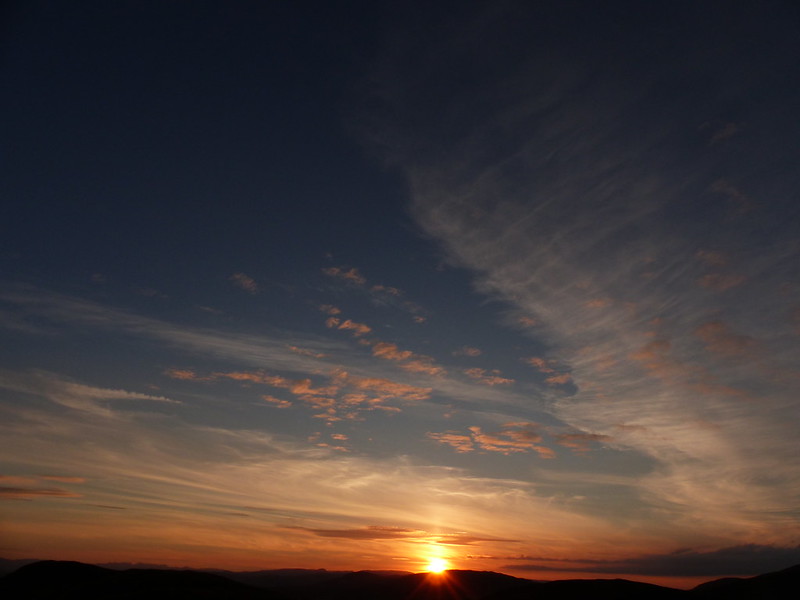 Nine miles (ish) and a fair bit of up and down, Not bad for a Thursday evening.