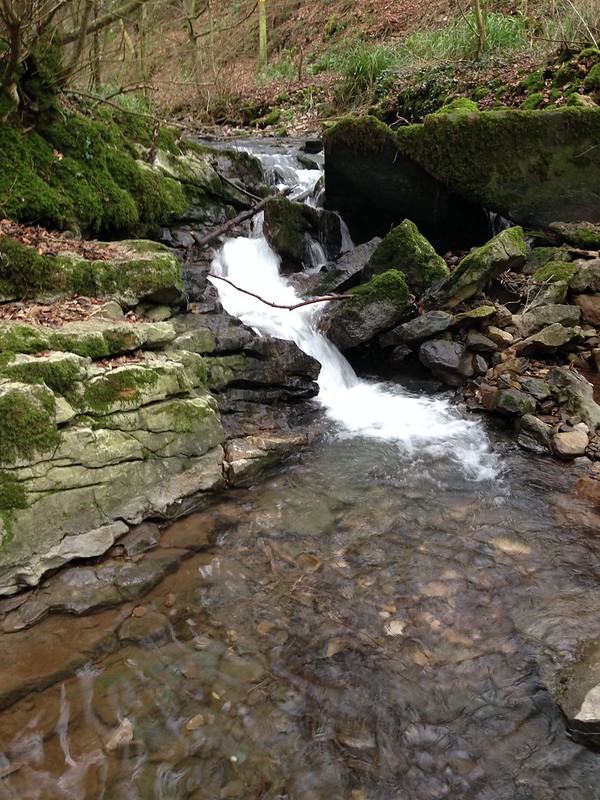 Casterton Beck. (Actually unnamed on the map, so I made up an appropriate seeming name). Anyway, another Lune tributary!

B’s rugby training was switched to the playing fields at Casterton School. I forgot this was happening – B had some harsh words to say about that – but after we had wandered around cluelessly at Underley Park for a while, I remembered. More cluelessness followed, driving around looking for which part of the school we needed, and B was eventually deposited with his team. Since I’d forgotten about the change of venue, I hadn’t thought to look at a map for a suitable perambulation to wile away my time whilst waiting.

I decided to follow my nose to see where that took me and set off along some minor lanes which brought me round a loop and back to the village. Then I followed a track (I now realise, not a right-of-way. Oh well, never mind.) which brought me to an unusual bridge over the beck seen above and to an actual footpath. 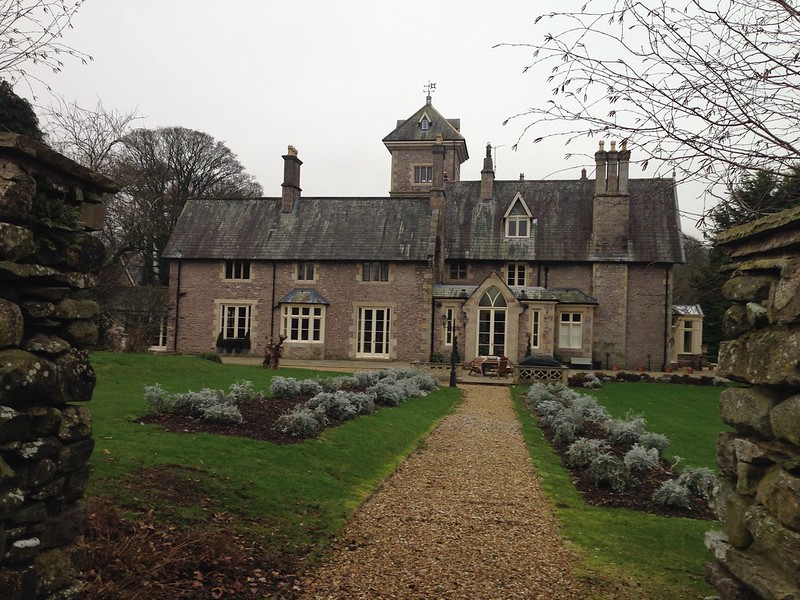 The path took me through some woods and then, after a right turn, to a rather spick and span looking Casterton Grange. No wonder it looks so neat and tidy: it’s currently up for sale, though I couldn’t find an asking price online; probably one of those cases where if you need to ask, then you can’t afford it! The house was built in 1848 for a vicar, David Barclay-Bevan. You might think a country vicar would struggle to afford such a palatial property, but he was independently wealthy, his father was a partner at Barclay’s Bank (source). The house was designed by Ewan Christian an ecclesiastical architect who restored Southwell Minster and Carlisle Cathedral and later went on to design the National Portrait Gallery. 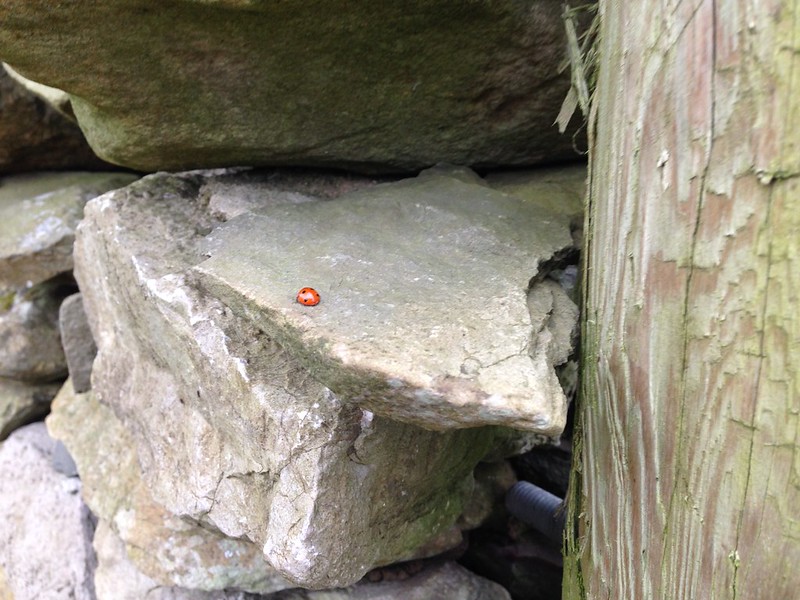 I’m not sure what tempted this ladybird out: it was cold and wet. 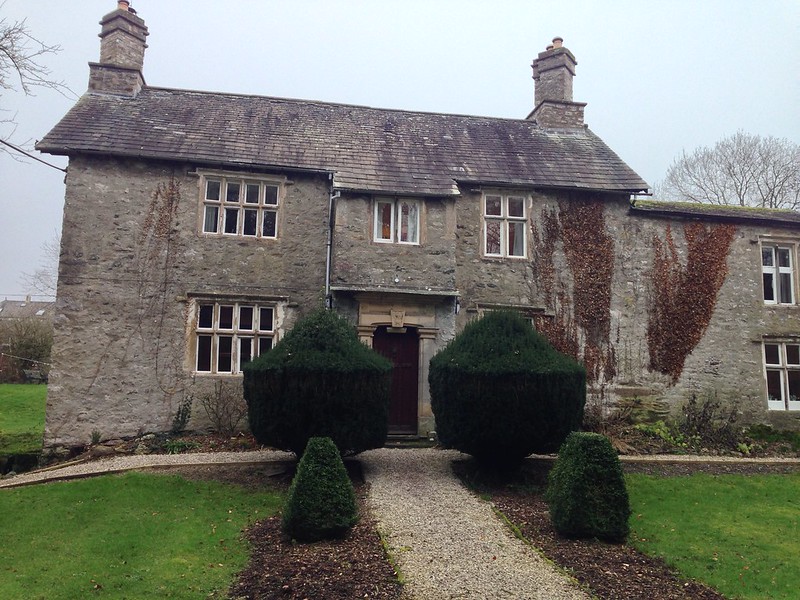 I think Casterton Old Hall is part of the school. This building dates back to seventeenth century. The Historic England listing makes me want to see the inside, especially the fireplace “with Tudor-arched opening, twisted wood, columns and overmantel with relief panels of busts, dragons, etc., probably of 1530-40 re-used”.

Later, I was out again for a short, local stroll in the fog. 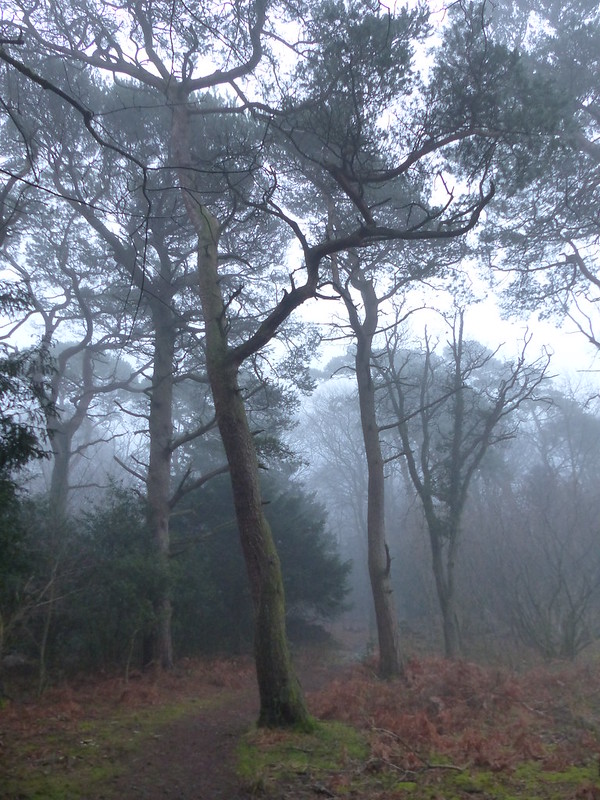 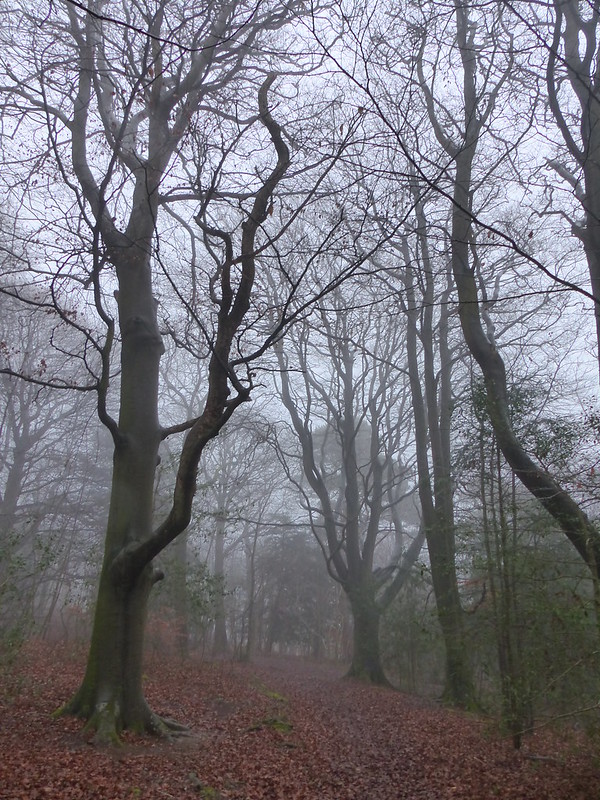 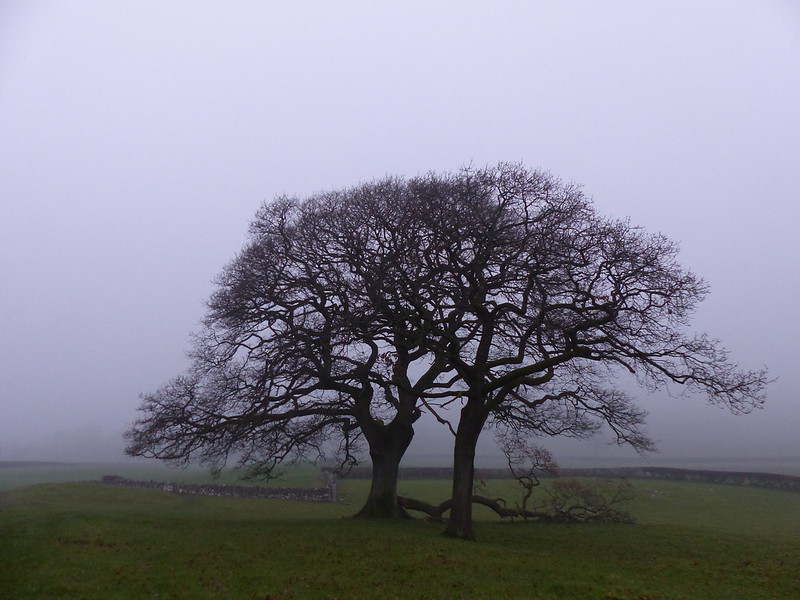 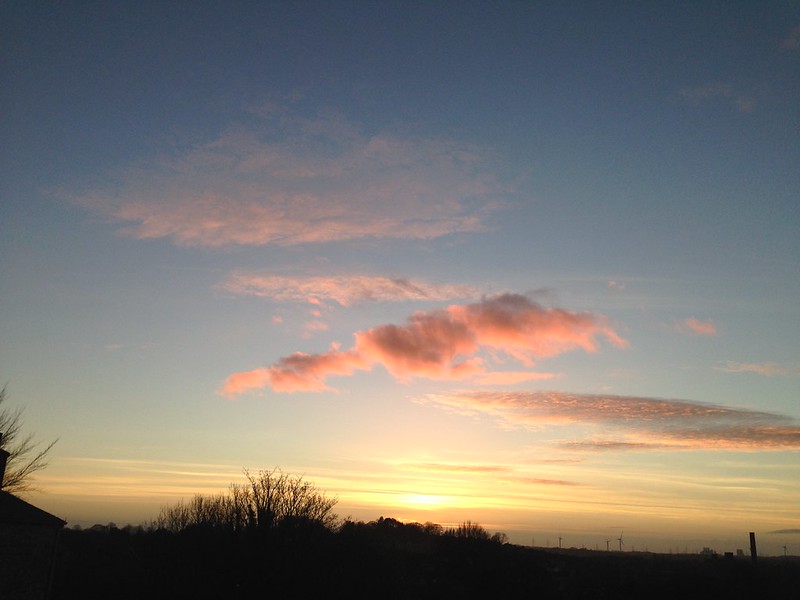 …was taken a few days later when, looking out of the staffroom window at work, I realised that the sky was clear and the sun setting and so dashed out for a few moments, climbing the hill to the castle to try to catch the sunset from there.

Since that photo makes this a ‘Sunset Post’ I feel fully justified in appending a song. A Song of the Weather in fact:

I heard this recently on 6 Music. Not quite the stereotypical 6 Music tune perhaps, but then, I’m not sure what is. I remember Flanders and Swann for ‘The Hippopotamus Song’ which along with ‘The Runaway Train’ and a couple of Bernard Cribbins songs, ‘My Brother’ by Terry Scott, Alan Sherman’s ‘Hello Muddah, Hello Faddah’ and, no doubt, numerous others, which will occur to me too late, once I’ve clicked on ‘Publish’, was a regular part of my Saturday morning radio listening when I was a nipper.

Bloody January again, indeed! Except, I quite like January: the sunsets are getting later, there’s snow, but also snowdrops and spring is on the way.

Just in case I’ve given the false impression that we had an endless of succession of bright and sunny days here over Christmas and New Year, I’m posting a few photos from a turn around Eaves Wood which TBH and I enjoyed on one of the two foggy, final days. 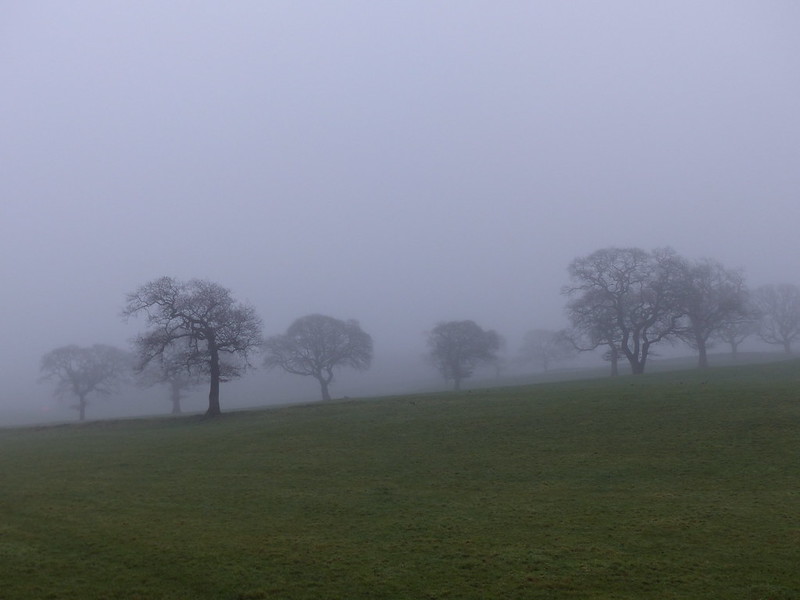 We’d had some considerably more grotty weather than that previously too. 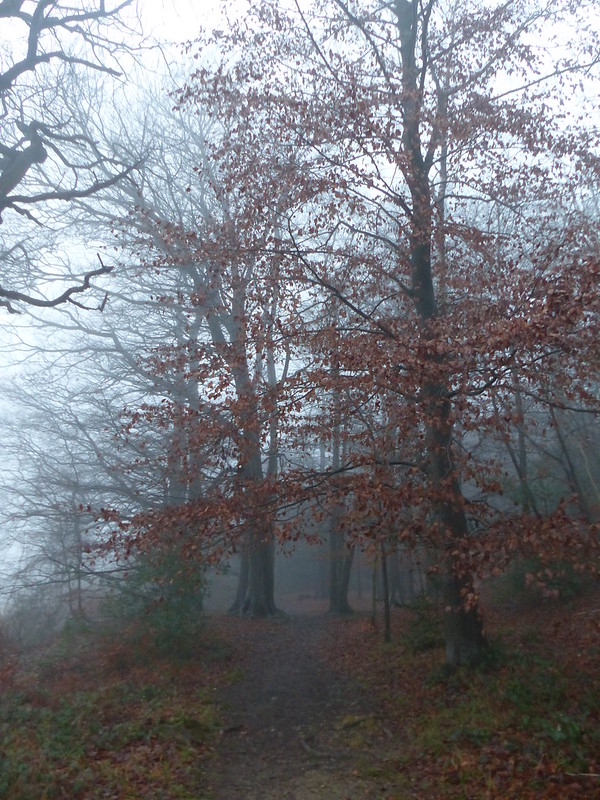 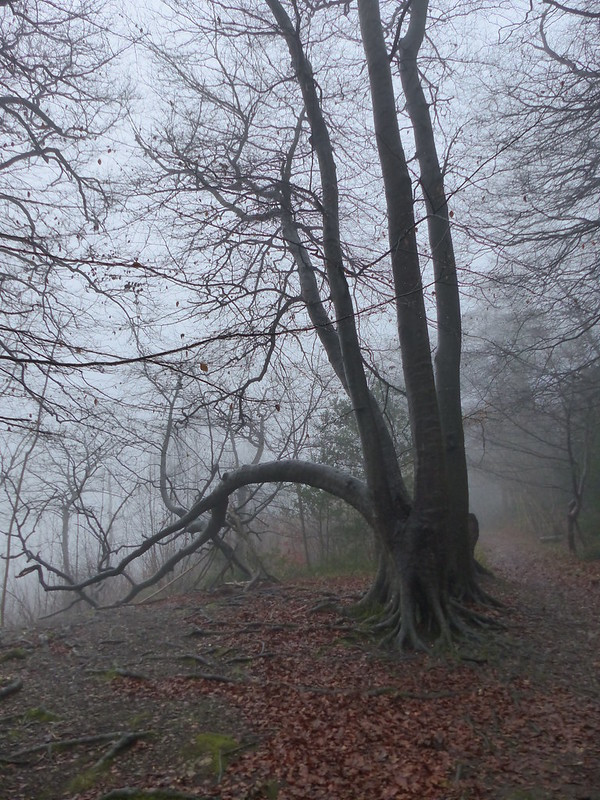 Actually, if I don’t have to drive, and if it doesn’t last too long, I quite like a bit of fog for a change. The woods are quite atmospheric when full of mist. 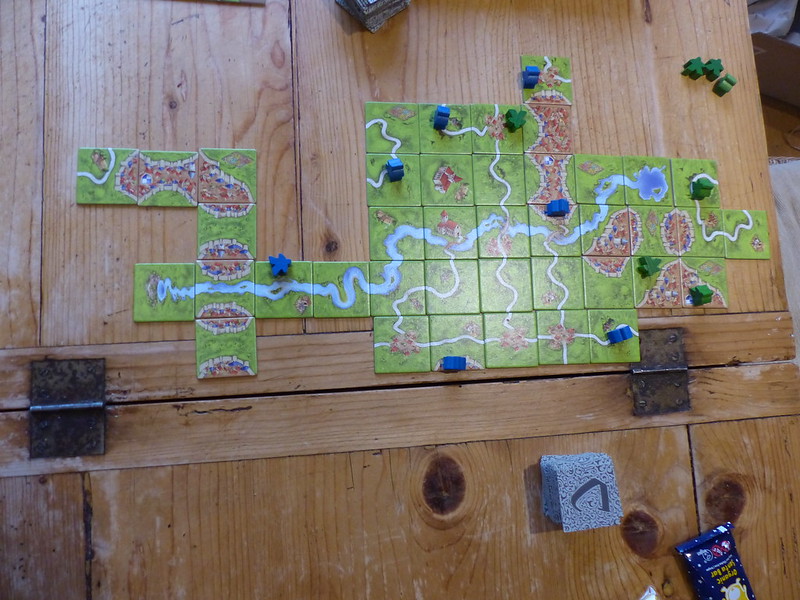 When the weather was poor, we managed to find other things to keep us occupied. Games are always popular. We played several old favourites over the holiday period, but we also acquired some new ones. 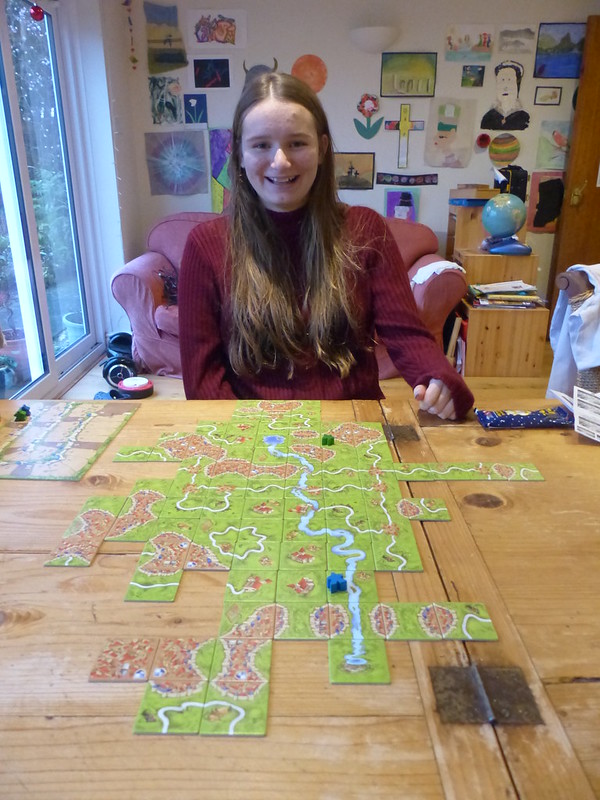 Here, A and I have just finished playing my favourite of those – Carcassonne – which has quite simple rules, but really makes you think as you play.

I also picked up, second hand, this old favourite… 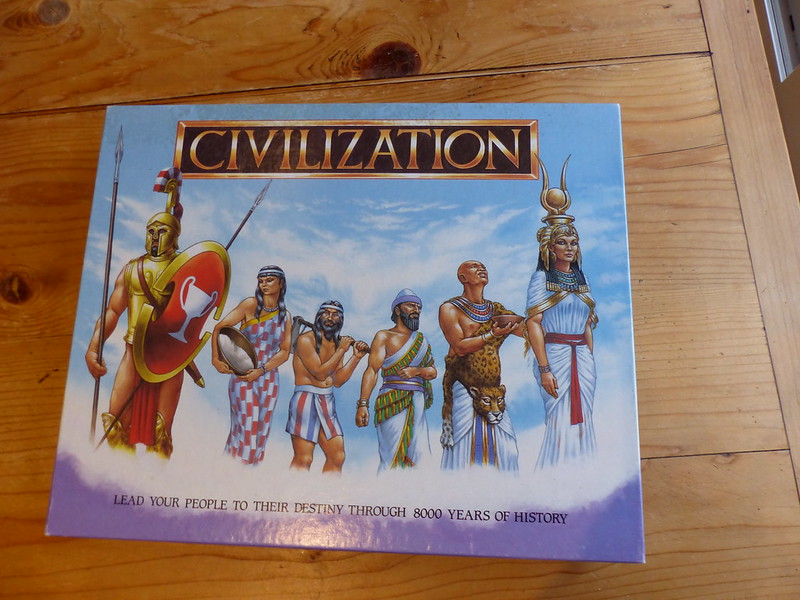 …which I first played when I was in the sixth-form and which later became the fall back activity for some of our group of hill-walking friends if prolonged diabolical weather dampened our enthusiasm for being outdoors during trips to Scotland. I’m very excited about playing it again, although I’m uncertain whether I’ll ever find the twelve hours of free time needed, or six other players willing and able to join me.

All Beer and Skittles?

So, after some bright and spring-like weekends in January, February’s first weekend heralded a return to more wintery fare. On Saturday it snowed. I dropped A off for an overnight stay with friends who live in a cottage on a hillside with a grandstand view of the Lyth Valley. Well, normally it does – on this occasion, with snow falling thickly – we couldn’t see further than a couple of field-lengths away.

By the time I arrived home, the snow had turned to rain and a rapid thaw was underway. This didn’t happen further north however, and that evening, we later found out, A was sledging by moonlight.

Sunday morning brought a dense blanket of fog. The fields were still white over, but what looked from a distance like snow, turned-out, on closer acquaintance, to be wet slush.

The boys wanted to sledge however, and grey, wet and dispiriting though it was, the slush was at least slippy – so sledging it was.

At the Cove a couple of fishermen sat in deckchairs looking out into horizon-less grey.

We met numerous friends on the Lots – sledging seemed to be the order of the day. The forecast had suggested that things would brighten up, but although the sun kept appearing as a white disc through the murk and threatening to break through, the promised improvements never materialised.

The boys were shown (by our friend E) a run which had a small jump in the middle. Here’s a ropey film of B sledging down it:

Eventually, after a snowball fight and lots more sledging, the boys were ready for some warm, dry clothes and some lunch.

I decided I could wait a little longer for those pleasures and went for a bit of a longer stroll through Eaves Wood and down to Haweswater. The photos I took were of exactly those things I like to photograph at this time of year, in these conditions…..

The secret hearts of snowdrops…..

Later in the week (Wednesday?) I arrived home form work just as the moon was rising. Full moons generally rise at around the time of sunset. This was a little after sunset, and rising in the eastern sky, I presume that the moon was bathed in light which had passed through the earth’s atmosphere? Certainly the moon was noticeably red. I fiddled with the settings on my camera, but still ended up with a collection of blurred and useless shots. This one does at least give an idea of the colour:

Today, despite sub-zero temperatures, it rained. Not surprisingly, the rain froze as it landed. It was lethal – I passed the immediate aftermath of a multiple vehicle pile-up on the motorway on my way to work. The A590 in Cumbria was apparently very badly effected.

I pass this diminutive ruined cottage in Eaves Wood regularly on my walks but have never got round to photographing it before. It has three small rooms the middle one of which has this hearth and chimney breast.

Whether anyone actually ever lived here I don’t know. Elsewhere in the wood can be found the foundations of an old summer house and some of the paths have clearly been very carefully constructed. There are also some old concrete water tanks for ‘the big house’, now the Woodlands pub. Clearly Eaves Wood was once a garden for the ‘the big house’ and perhaps this cottage was used by the gardeners?

I know that as a child a ruined cottage in the woods would have really fired my imagination which would soon have peopled it with a dramatic past. Perhaps the atmospheric conditions awoke my inner child. Of course, a ruin in the fog is a staple romantic image…

Like Caspar David Friedrich’s The Abbey in the Oakwood.

And since I haven’t yet found any photographs of a cloud inversion from Saturday on the net, here is the same artist’s The Wanderer, perhaps his most famous painting?

The Ruin in the Fog

The mists of autumn have given way to the fogs of winter. Even foggy days have their magic as S and I discovered when I took him for a turn around an Eaves Wood which was familiar but at the same time strangely exotic and unreal.

I was reminded of the early days of my blog in January when I walked on a similar cold and murky day. Now, as then, every leaf and twig was bejewelled with droplets. But frost had transformed these droplets into tiny frozen gems.

Denuded of colour, the wood became a world of pattern and form.

And the fog lent illusory depth to our views.

Of course, what colour there was seemed so much the brighter for its singularity.

And though most leaves are now brown and rustling leaf-litter, the brambles are still good value:

Even the meagre height gain on Castlebarrow led to a brightening of the sky, and we could see the sun trying to break through the clag.

I had the feeling that a little more climbing and we would emerge above the fog into glorious sunshine and a fabulous cloud inversion. I was hoping that a fellow blogger might be in the Lakes taking great photos. In fact a friend was in the Lakes and tells me that my guess was correct. Photos anyone?

I still don’t seem to find heart-shapes at every turn, but I realise that I have developed my own alphabet of signs and symbols – dew dripping berries, turning leaves, tangled beech roots, thrusting fungi; repeated images whose import is immanent but just beyond reach, like the phrase that refuses to be recalled but which if it would only come to mind would surely be the mot juste. A recent addition to the alpha and omega is a drop dappled oak leaf. How satisfying that this example of the genre was so neatly foregrounded against the dark grains of a tree stump:

A silvered spider’s web is common currency in the symbolism of damp winter days, but I’ve been after a good example since Ron posted a stunning photo over on Walking Fort Bragg. This may not be The One, but it’s a start:

Every child appreciates the totemic power of feathers. Ours collect them with relish. One section of this walk was waymarked with small feathers regularly placed on branches alongside the path….

…perhaps a new hieroglyph for my runic alphabet.

Lake District blogging from the Lakes this weekend at A little bit about not a lot, with the promise of more reports to come. Some great photos, but no cloud inversion. If you come across any reports of seas of cloud and brockenspectres please let me know.