After their exertions of the day before, The Prof and The Tower Captain were both in need of an easier day. Obviously, I was up for another Big Day On The Hills, but felt that they needed my company. Well, okay, I was a bit tired too. I was also put off by a forecast which sounded like the winds would be even fiercer than they had been on the Saturday. I found a circuit on my OS maps app which looked ideal and wasn’t too far out of our way home.

We had a little drizzle, but the wind was quite mild, and later in the day, TC and I were both down to just a t-shirt – pretty mild for March!

With hindsight, we should have climbed Dunmore Fort which is not only a little higher than Bochastle Hill, but also has some very impressive looking defensive structures on its western side. Next time.

We chatted to one of the marshals who were out on the course for the Callander 10K which would be running later in the day and then walked down a road with a sign declaring it to be ‘a walking and cycling friendly road’. A nice idea, but it’s drivers that need to be friendly, not roads.

As the track through Coilhallan Wood descended towards Callander, there were tantalising views towards Ben Ledi, always partially obscured by trees…

We climbed Ben Ledi back in 2015, on another day with a ropey forecast, which I enjoyed enormously, despite the forecast proving to be largely correct.

We found a bench on the outskirts of Callander and sat by the river to eat our lunch, and watch runners coming by near the end of their 10K. They were of all shapes and sizes, ages, and speeds. Some were struggling, some clearly very happy. It made me feel quite nostalgic for the days when I used enter races of this kind myself.

From Callander, we walked back to the car park along the course of the former Callander to Oban railway line. In the field next to the line there are earthworks which betray the site of a Roman Fort. This is even further north than the Antonine Wall which stretched between the Clyde and Forth estuaries. It was built in AD85, which means it predates Hadrian’s Wall.

The next day it was back to work sadly, but at least I had some welcome company during my breakfast… 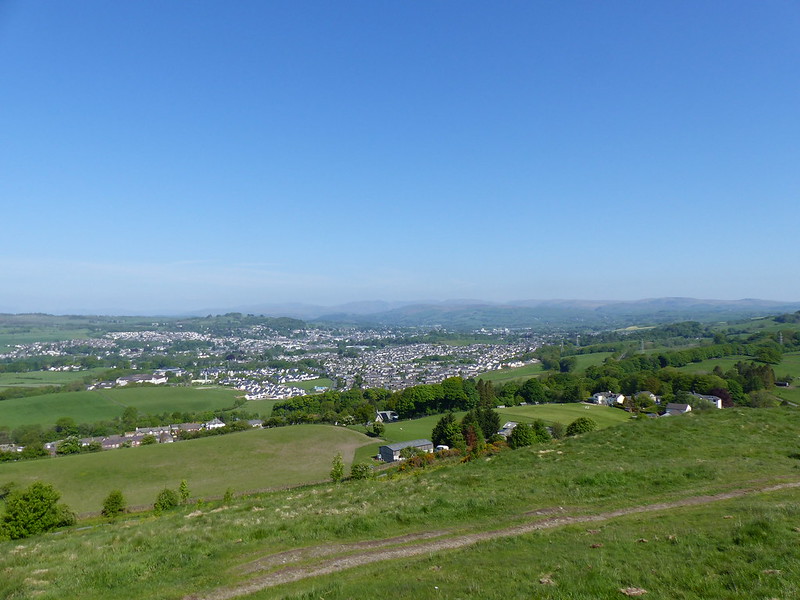 Kendal nestling in the hills.

A Saturday morning, during our May heatwave. A had another DofE practice – she and her companions walked from Windermere to Gilpin Bridge, with a camp en route at Great Tower Scout Camp. Our involvement mainly consists of hoping that her knee holds up, but she did first need dropping off at Oxenholme Station near Kendal.

Above Oxenholme there’s a small hill (185m) called The Helm, which I have long intended to climb without ever actually getting round to it. TBH was taking the boys to BJJ, so this seemed like a perfect opportunity to put right that omission. 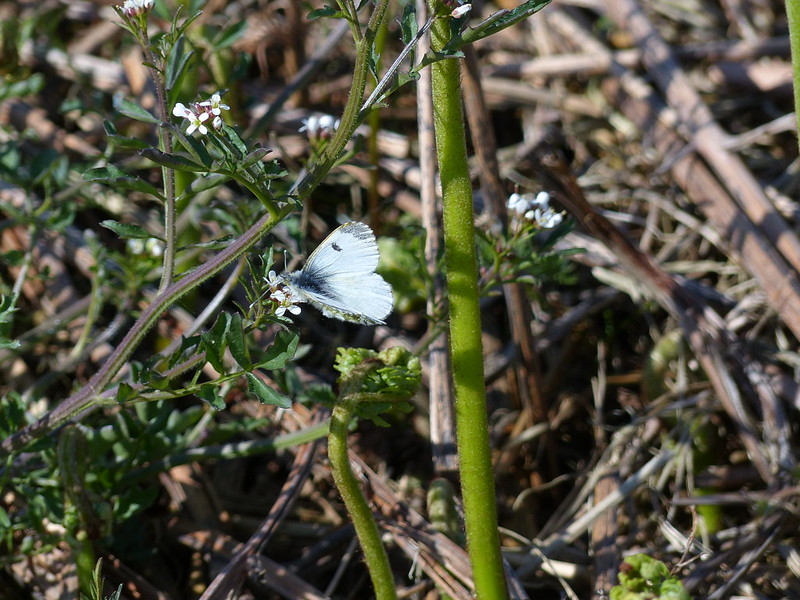 A female Orange-tip. I think. 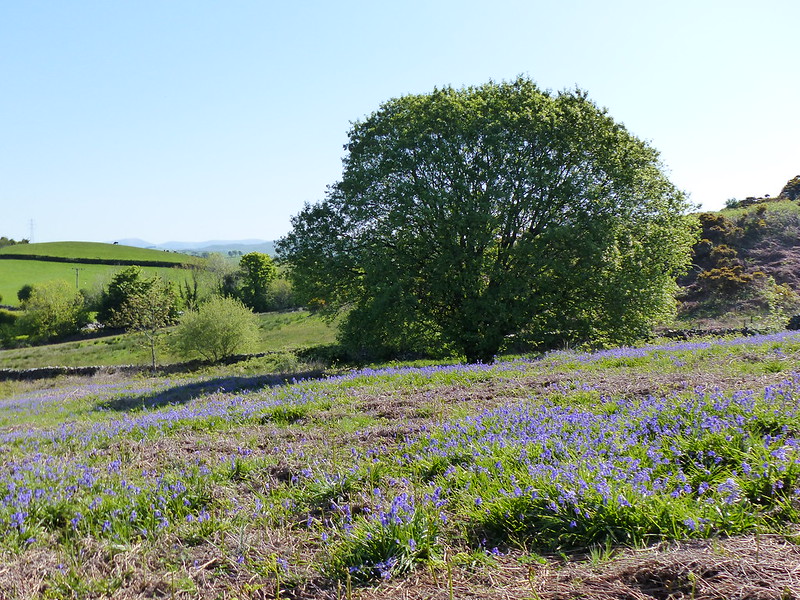 An information board close to where I parked – just off the minor road north-west of the Helm – informed me that the rock underlying the hill was Silurian, which confused me: isn’t that a geological period rather than a type of rock? Anyway, that sparked my interest and an app on my phone informs me that the rock is ‘interbedded siltstone and mudstone’ which was indeed laid down during the Silurian period. I’ve always just assumed that the Helm was another of our little local limestone hills, but this makes it older than the Carboniferous rocks of its neighbours. 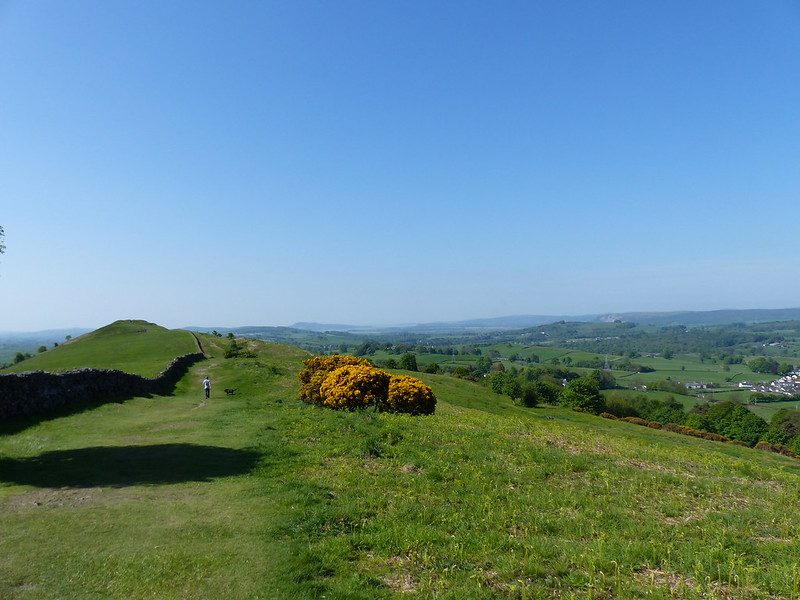 Looking south along the ridge to Castlesteads. Arnside Knott in the distance.

The sign also informed that dogs should be kept on leads at all times to protect ground nesting birds. An edict which was cheerfully ignored by the many dog walkers who were out enjoying this splendid morning. 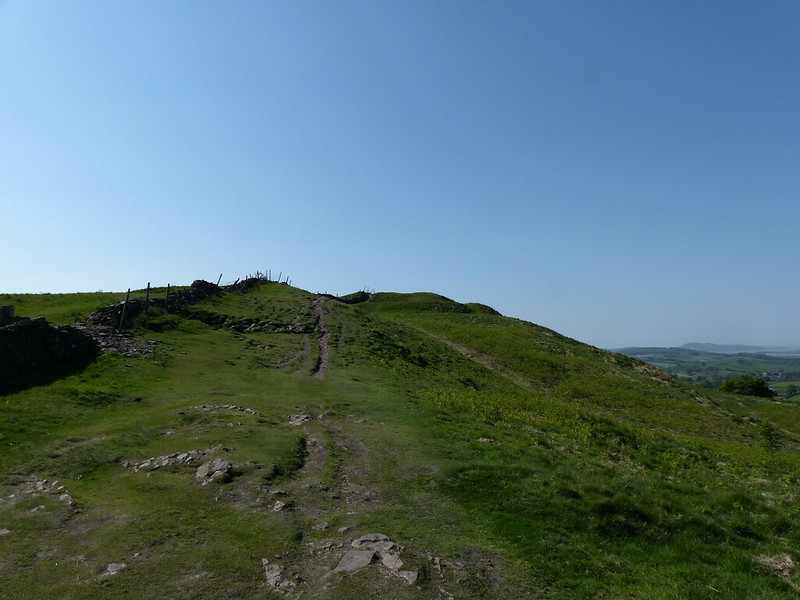 The west side of the hill is a common and is laced with paths, but initially I stuck to the broad ridge, which had brilliant views.

In the photo above you can see what looks, at least, like a rampart of Castlesteads, an Iron Age hill-fort, which, according to Historic England, is an ‘exceptionally small’ example of its type. 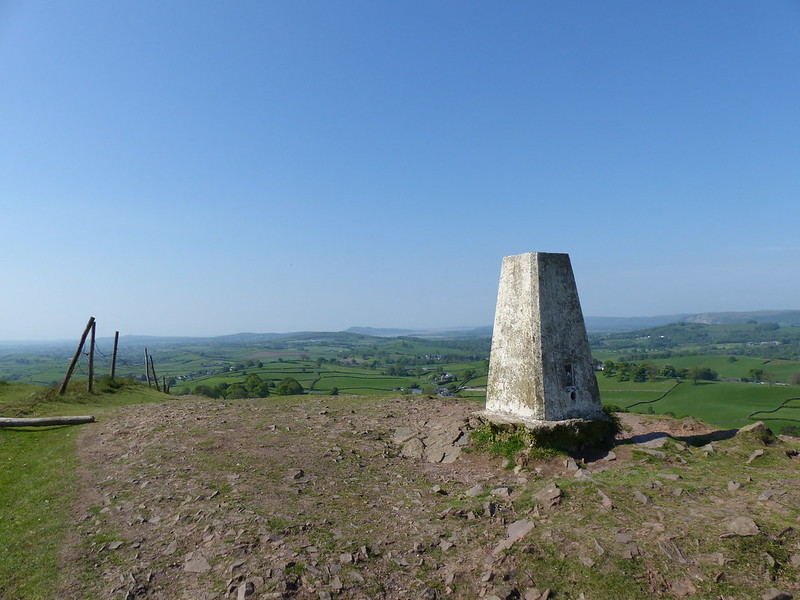 South from the top. Arnside Knott again and the Kent Estuary. 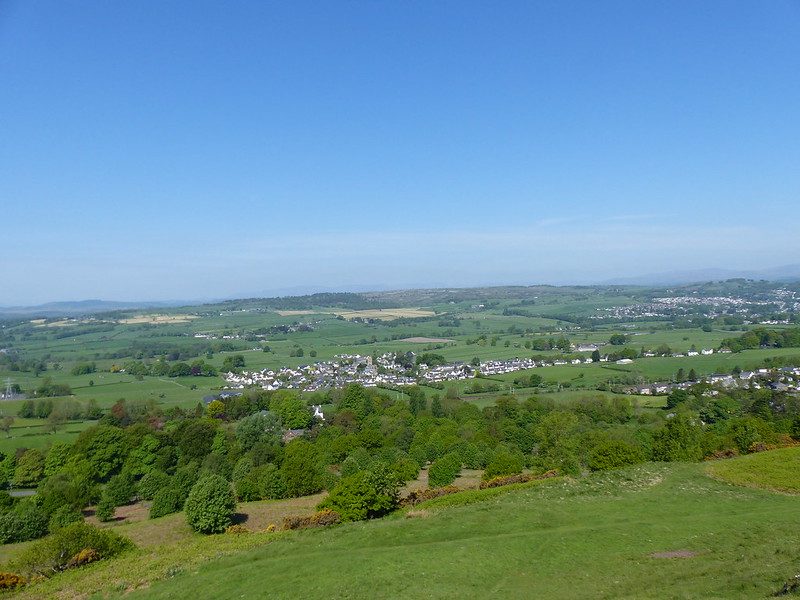 Natland with Scout Scar beyond. 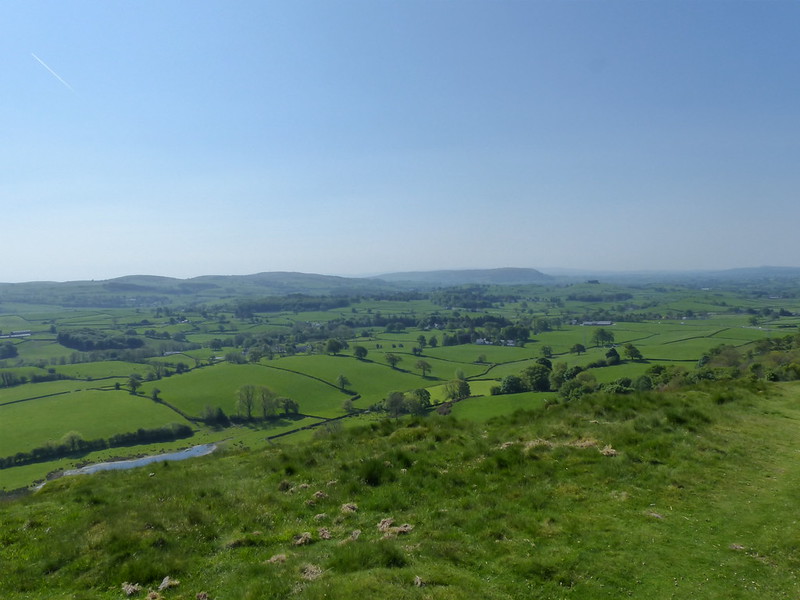 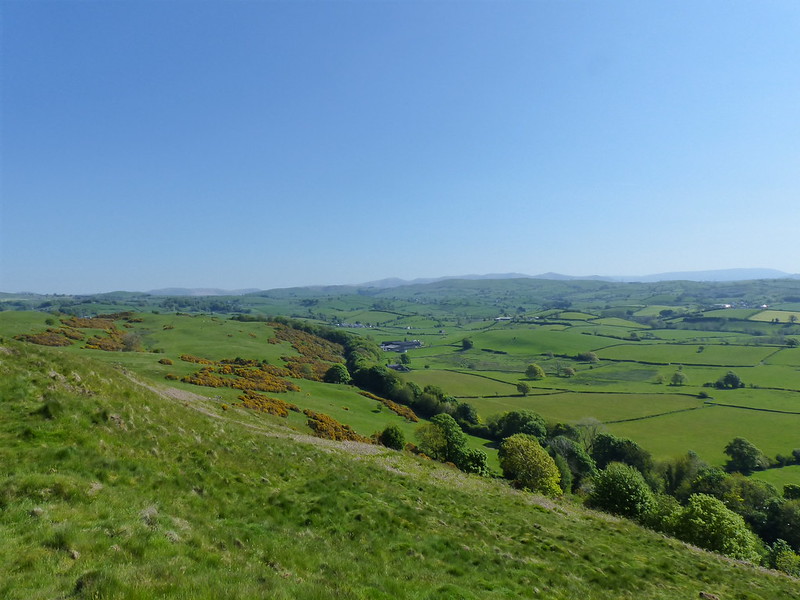 The view to the north-east. 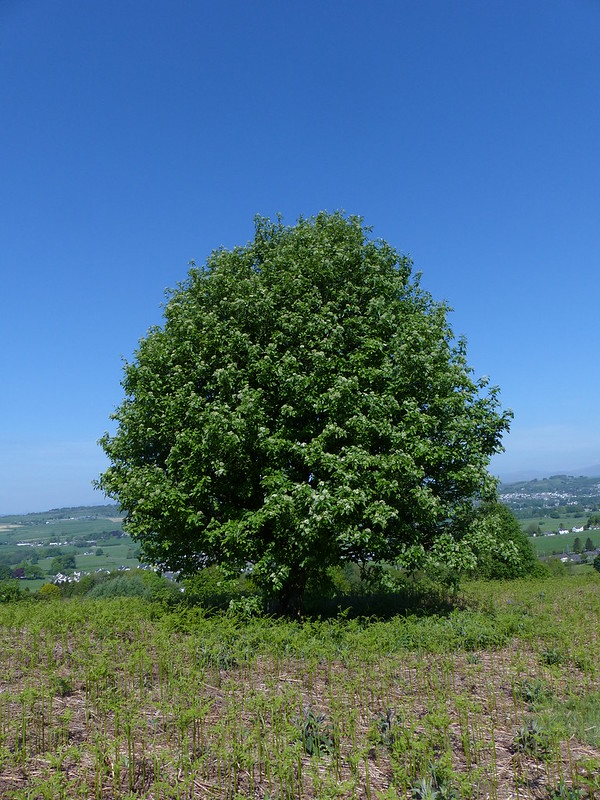 The western slopes were studded with Rowans just coming into flower. 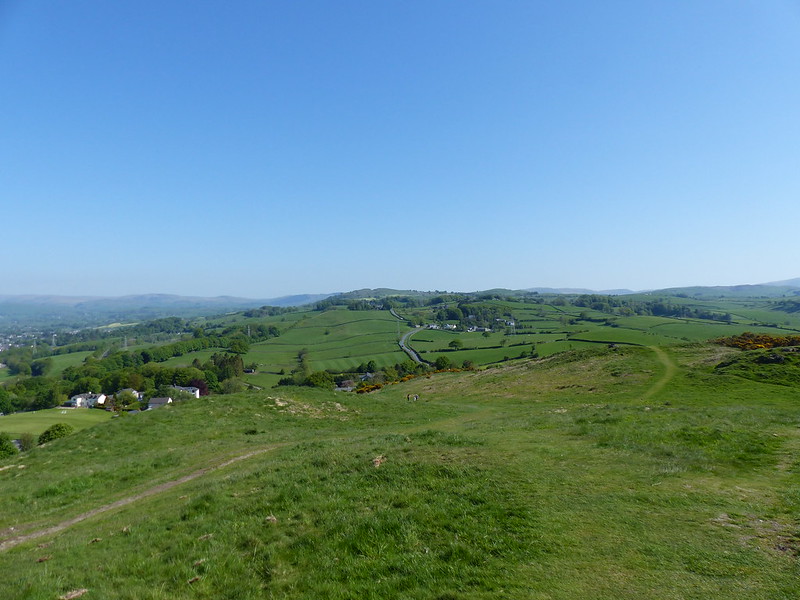 …is Benson Knott which lies north of The Helm and is another local hill I’ve been intending to climb for an absolute age. Soon…hopefully.