Once we’d decided that we would spend some time at home together over the summer, we resolved to try to get out and be active, turn our hands to something new from time to time, generally make the most of what’s on offer on our doorstep. We tried archery, not once but twice. We cycled along the shore of Windermere, and would have cycled again, but for difficulties with a defective cycle carrier. The boys and I dabbled in gill-scrambling. All good. But top of our wish list of things-to-do was a spot of canoeing. Attentive readers will be aware that as long ago as last New Year I expressed a yen to go “messing about in boats: to do some sailing; to buy, beg, borrow, blag, build a Canadian Canoe”.

Well we sailed on the Kent Estuary back in May – I don’t think that ever made it on to the blog – but it was terrific fun. And now we have some Canadian canoes, inflatable ones, having decided to take the prosaic approach of buying them. 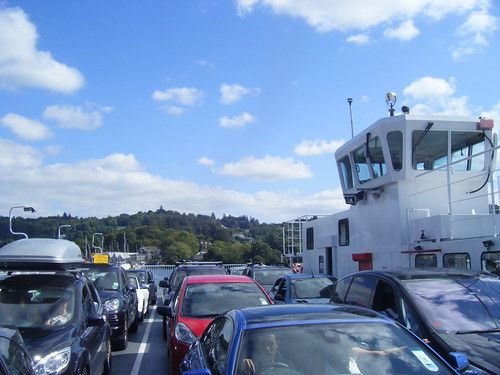 We’ve two canoes, a two man and a three man. I don’t intend to review them, we’re very happy with them, but I don’t really have anything to compare them too or sufficient knowledge to to give an objective assessment. However, there do seem to be some real bargains out there and if you’re interested in some details leave a comment and I’ll get in touch.

We’ve had them out three times so far; twice at Fell Foot Park and, sandwiched between those outings, another trip on Windermere, but this time starting on the Western Bank from Harrow Slack car park. We travelled across to it on the Bowness Car Ferry (above). 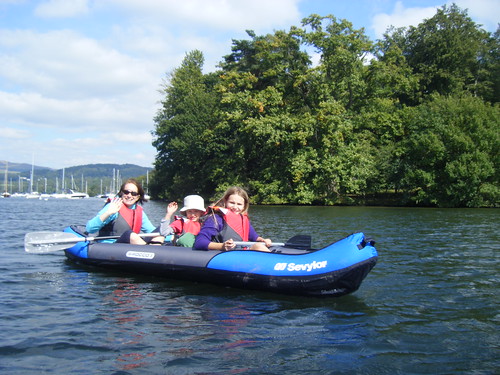 These photos are from that second trip. It was pleasantly sunny, but very windy. 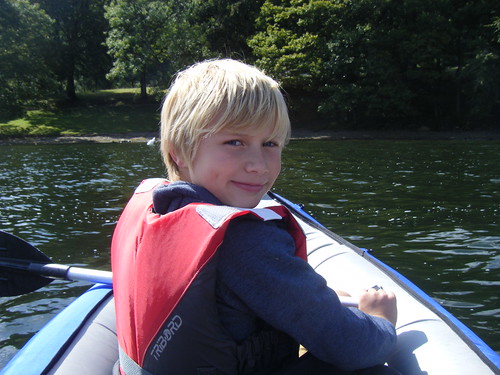 We paddled along the shore with the wind behind us, took a tour around two small islands called Lilies of the Valley and then landed back on the lake shore…. 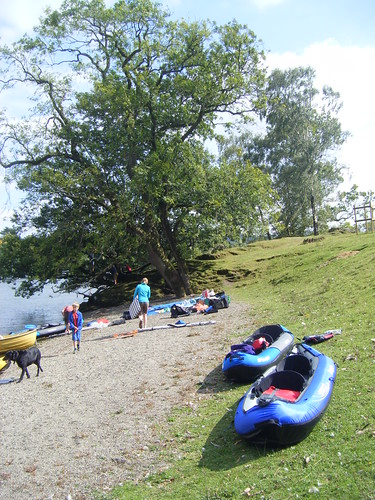 …to stretch our legs, climb trees…. 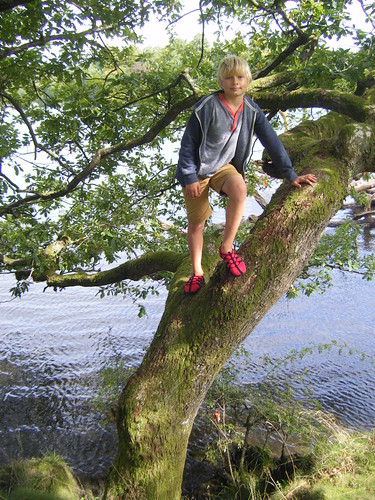 …and photograph the local fungi…. 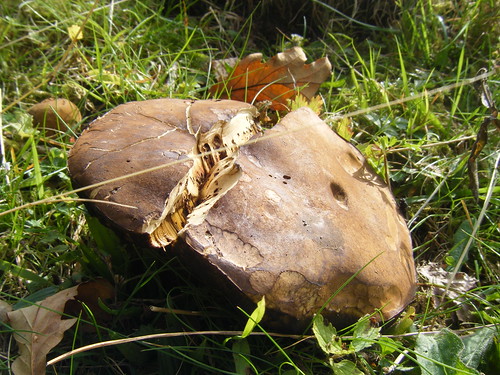 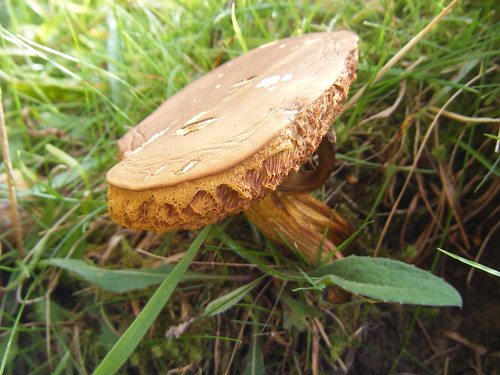 Back in the boats we cruised past the two small islands again and then followed the western shore of Belle Isle, keeping out of the wind which was funnelling down the lake. 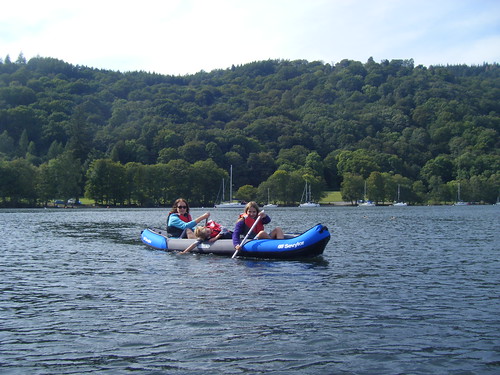 Belle Isle is comparatively large and is privately owned, with a house on it. Here we are (some of us anyway) hugging its sheltering bank. The two islands behind are the Lilies of the Valley. 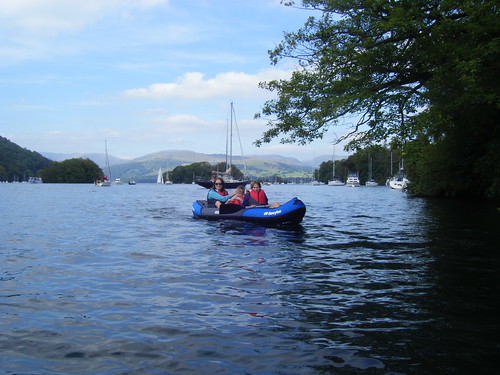 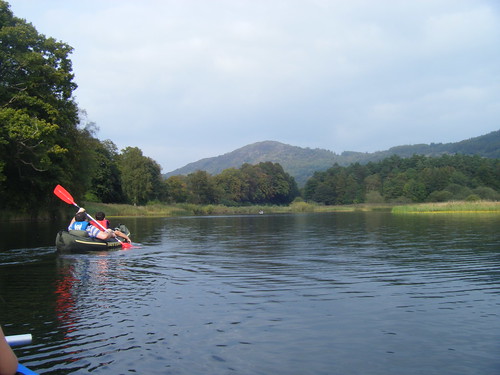 …is from our third trip. The people in the boat in front are our friends B and M. (Tempting now to add ‘Bargains’ to that, but if instead, I call them M and B I shall only think of Mitchells and Butlers – I dread to think what these low rent free associations say about my character and misspent middle-age?) Anyway, that’s our friends B and M, M and B. We’re canoeing on the River Leven. We did that the first time we launched the boats from Fell Foot Park too. Then, the water levels were much higher and there was quite a strong current. We managed okay, but we met others who were struggling. B, who had two kids in an inflatable dinghy which was rapidly deflating, was making no headway at all, and in the end we gave him a bit of a tow to the shore.

I’ve since found a copy, stashed away sometime ago, just in case I ever got around to buying a canoe, of John Wilson Parker’s ‘Atlas of the English Lakes’.

This clip of the front cover pretty much sums it up. It’s a lovely book, a sort of ‘Wainwright for the Lakes’ with hand drawn maps, handwritten text and lots of detail about access, boat launching etc. All that, and it’s published by Milnthorpe’s Cicerone Press.

Anyway, he warns against paddling downstream in the rivers flowing out of the Lakes in general, and down the Leven in particular, precisely because there can be a strong current and you’re then faced with paddling back against it. It is a pleasant trip down to Newby Bridge, and just about the right distance for us at the moment, but perhaps we shall have to be a little more circumspect in future. 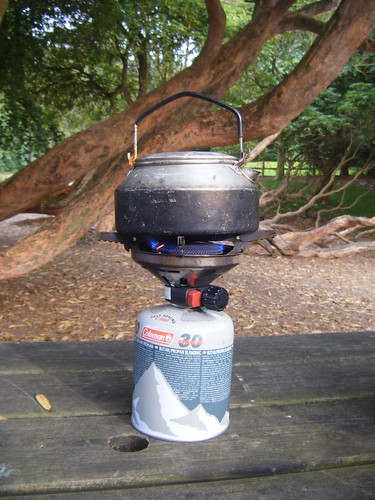 Fell Foot Park has the advantage over Harrow Slack of other facilities besides somewhere to launch – toilets, a play area, a cafe, an ice cream shop, room to throw a Frisbee, picnic tables etc. We try to not be in a position to need the cafe however – brewing the tea is part of the experience.

*So will the blog now have a sub-title “Paddling the Periphery?” Credit where credit’s due – this suggestion is from Alan Sloman’s comment on my January 2013 post about wanting to do some sailing and canoeing. Hopefully, there will be many more  ‘Paddling the Periphery’ posts to come.(Probably only when the weather is kind though).