Long-suffering readers of this blog may remember that in 2018 we holidayed in the Dordogne and Tarn valleys in France with some old friends. This summer, we repeated the trip. Once again, the whole thing was meticulously planned and booked by The Shandy Sherpa, whose attention to detail is staggering. For example: scoping all of the Aires on the drive down, in advance, using Google Maps to see whether they had large enough parking spaces for cars towing trailer-tents. As they say, the devil is in the detail, and Andy’s careful planning ensured that the whole trip went smoothly in potentially trying circumstances. Awesome.

This trip is a very laidback affair with certain key elements – a morning walk to the bakers; plenty of reading; meals together, often revolving around a barbecue; games of Kubb and Mölkky, usually continuing when darkness made accurate throwing next to impossible; lots of swimming, canoeing and floating down the river on inflatable rings; and short, steep walks up to the limestone cliffs above the campsite.

TBF had a potentially nasty fall in one of the caves, but, sensibly, used Little S to break her fall. Fortunately, neither were hurt badly, just somewhat shaken.

We’d brought three different hammocks with us, which all got a lot of use. They all belong to TBH, presents I’ve bought her over the years. Why does she need three? Because that way, there’s at least a chance that the kids will leave her in peace in one of them, whilst they argue over the remaining two. We probably need another one!

Upstream of the campsite, there’s an excellent swimming hole; downstream there’s a bridge over another deep spot – perfect for jumping in. Trips, with or without inflatables, between either of those pools and the one by the campsite were a significant feature of the trip. Of course, we could and did do the whole trip from the upstream pool to the downstream bridge, but the Céou is surprisingly cold, so that trip was a bit long for comfort. 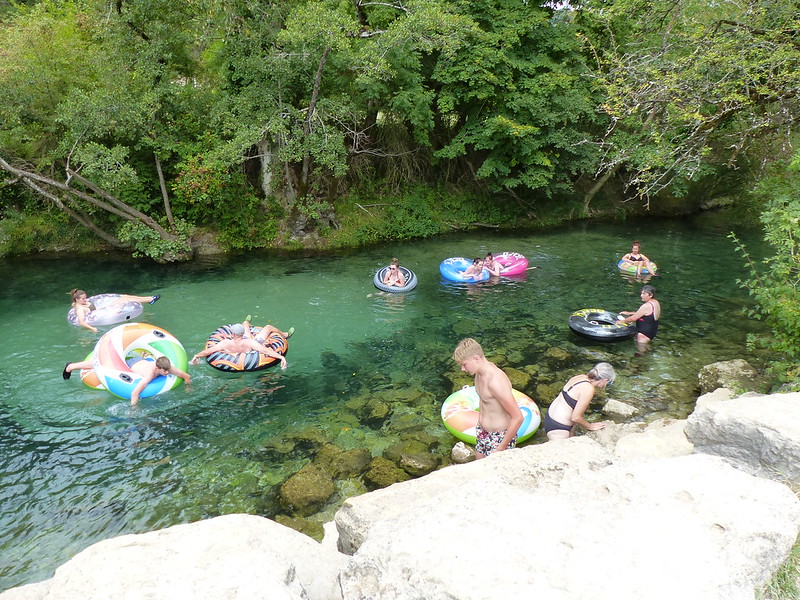 GR64, one of the amazing network of long-distance paths in France, passes close to the campsite. On a couple of occasions when the others were floating downstream, I took off for an out and back wander along the route. It was pleasant woodland walking, with occasional tantalising views of the Dordogne valley…

TBH and I visited the gardens on our last visit.

We did occasionally stray a little further afield, including a trip out to this magnificent castle. It had drawbridges, towers, winding staircases, caves below, lizards on the walls and even a bat hanging from the ceiling in one of the rooms.

I didn’t see the montgolfières as often this trip as I did last time, but I did frequently hear them flying overhead early in the mornings whilst I was still tucked up in bed. This photo shows the beginning of an afternoon flight which was very dramatic since the balloons flew very low and continually flirted with a collision with a tree, without ever quite hitting one.

Back to Camping Maisonneuve