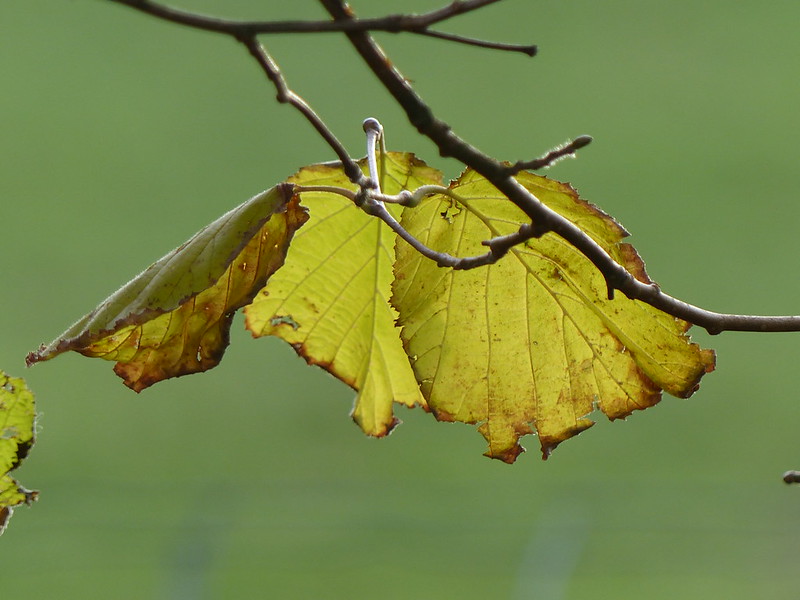 Whilst I’m whinging about the weather I perhaps should say that at least when respite from the storms with sunnier, drier spells have come, they’ve often arrived at the weekends. I spent one particularly glorious morning in Lytham St Anne watching B play rugby and, unfortunately, the rest of that weekend patching-up the roofing-felt on our summerhouse (glorified shed) which had been badly damaged by Abigail.

Anyway, on the Saturday which followed hard on the heels of Barney blowing through, S had a play-date in Yealand and TBH offered to drop me there so that I could walk home again.

I climbed up into the woods of Cringlebarrow, where the paths were, unsurprisingly, puddled, muddy and occasionally obstructed by fallen trees. Then I turned right to drop down into the steep-sided hollow of Deepdale. 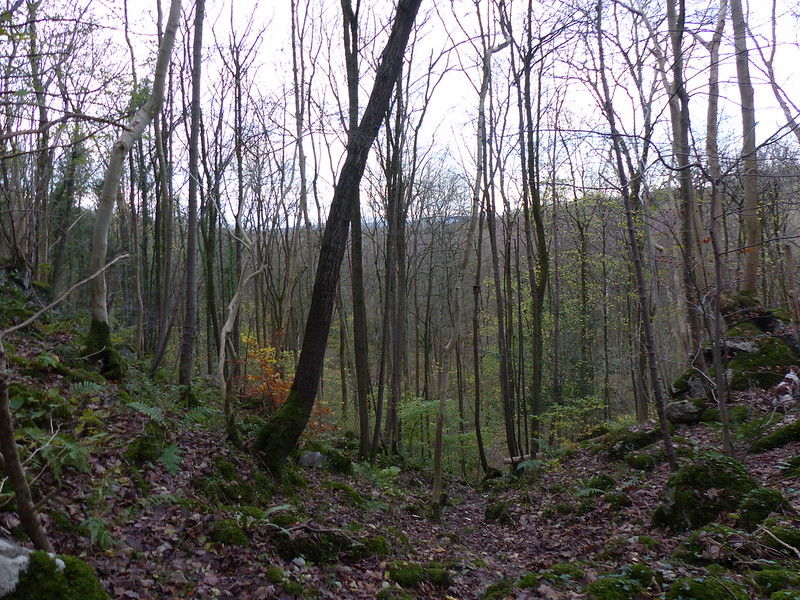 …a deep depression in the limestone, formed by the collapse of a cavern roof in the water-worn cave systems that underlie the AONB. Such depressions are called ‘dolines’. These ubiquitous features are more colloquially known as ‘sink-holes’ and characteristically pepper the landscape in all areas of limestone (‘karst’) scenery. Massive underground erosion takes place as the limestone dissolves in the flow of subterranean water, which exploits the fracture and fissures of the rock, thus creating the cave systems so beloved of pot-holers.

Although someone once told me that it was actually a crater made by a meteorite strike, and apparently other explanations for its existence have been proffered…

As a small child, the current owner [of nearby Leighton Hall] remembers Deepdale pond being referred to as an extinct volcano. 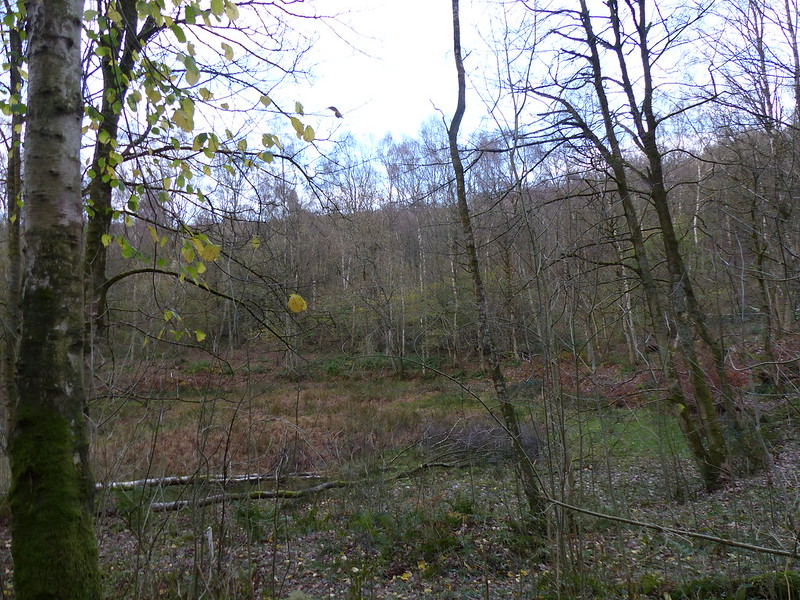 I remember there being quite a substantial pond at the bottom, but it has been silting-up for some time and even after this prolonged wet spell there was no surface water evident, so perhaps it’s gone. 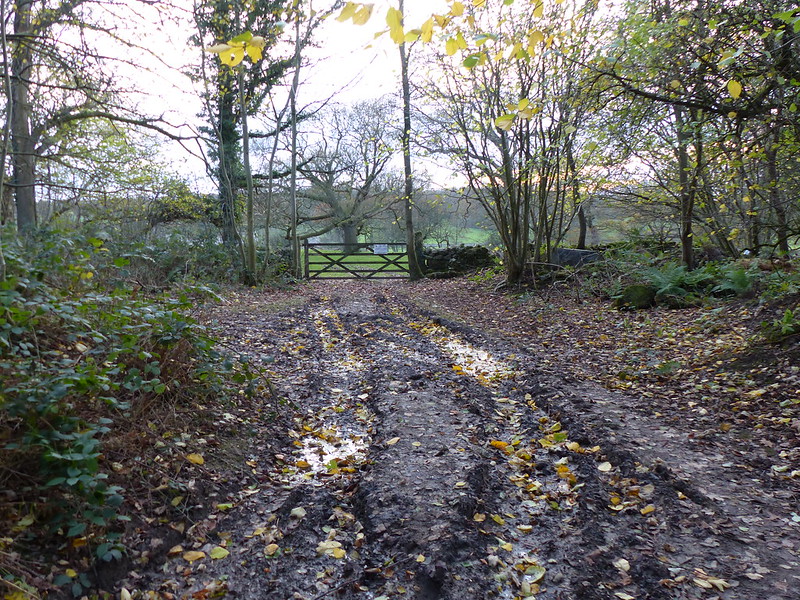 Leaving the wood, I was struck, as I am every time I come this way, by the huge oaks in the field by the wood. 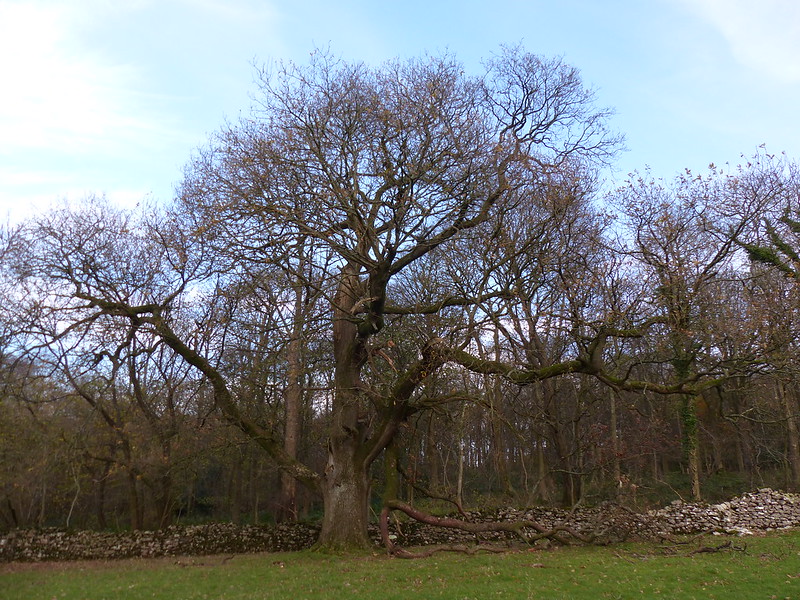 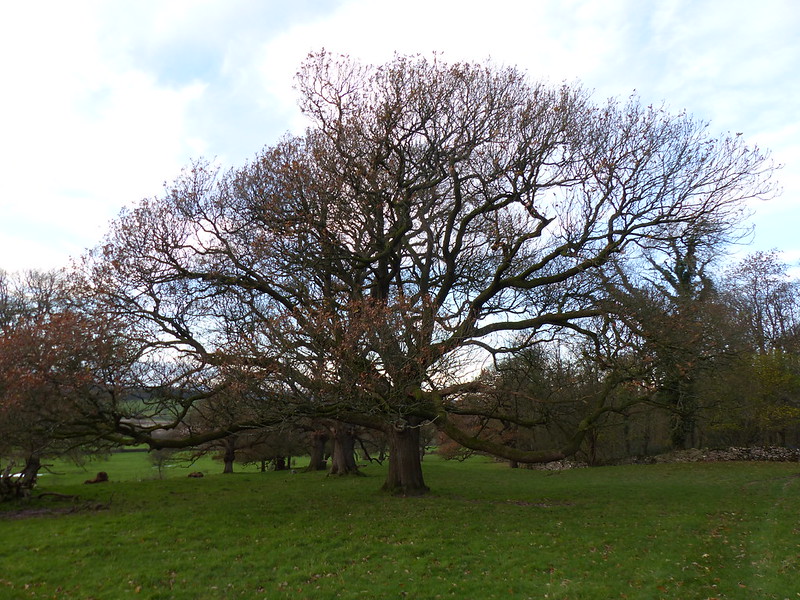 Passing Leighton Hall Farm and Grisedale Farm I came to the causeway across Leighton Moss. I was expecting the causeway to be flooded, in fact I was anticipating enjoying wading through the floods. I wasn’t anticipating that my wellingtons would leak. 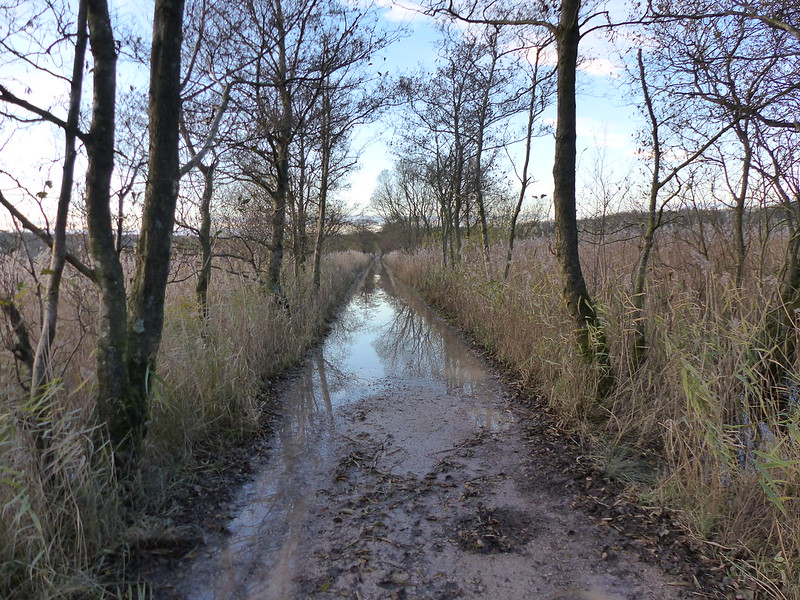 I can confirm that the water was very cold. And very wet. And that a wellington with a substantial split in it can hold a surprisingly large amount of water. 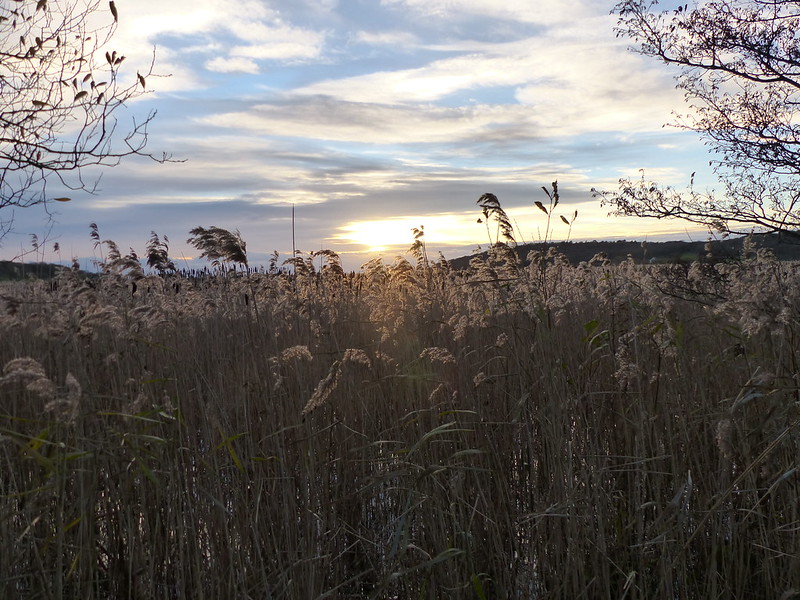 Even so, the reedbeds are special when the sun is low in the sky. 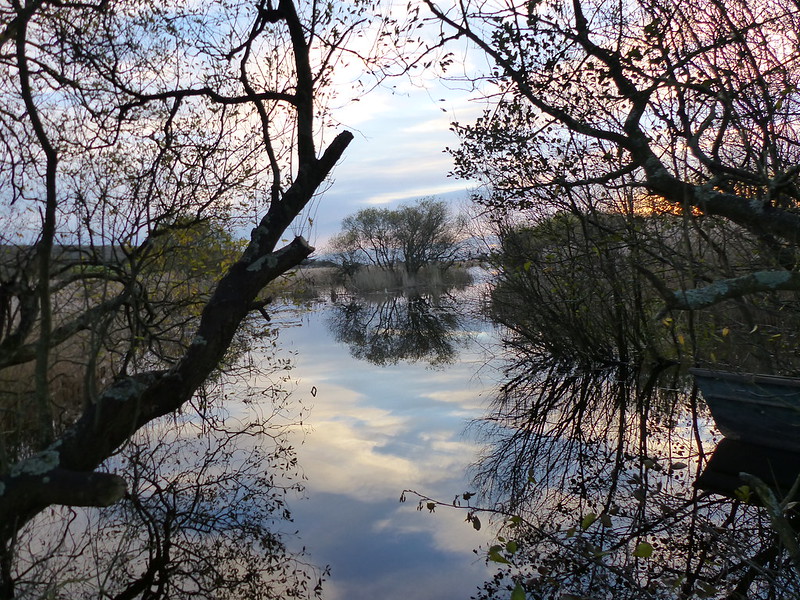 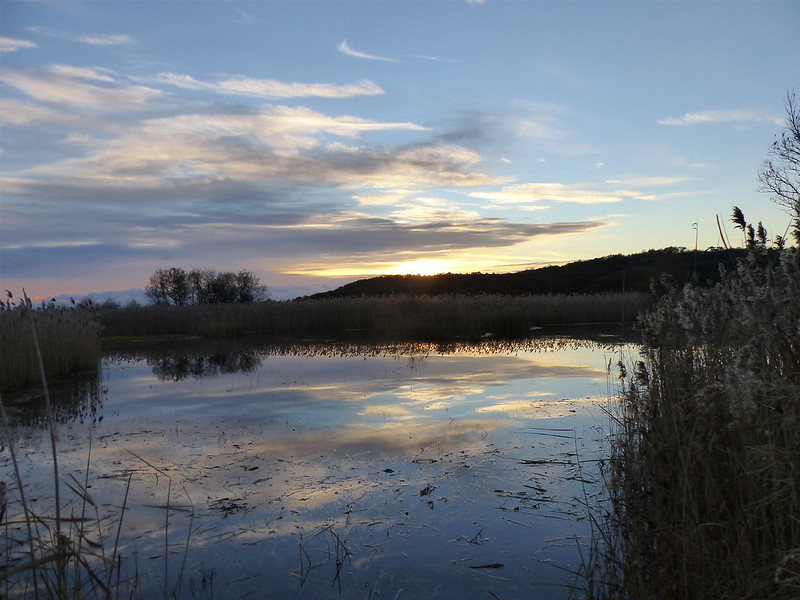 I was hoping to have a first proper look at the RSPB’s new ‘sky-tower’ but it was already well occupied by a keen crowd watching the starling roost, so I decided to defer that pleasure. 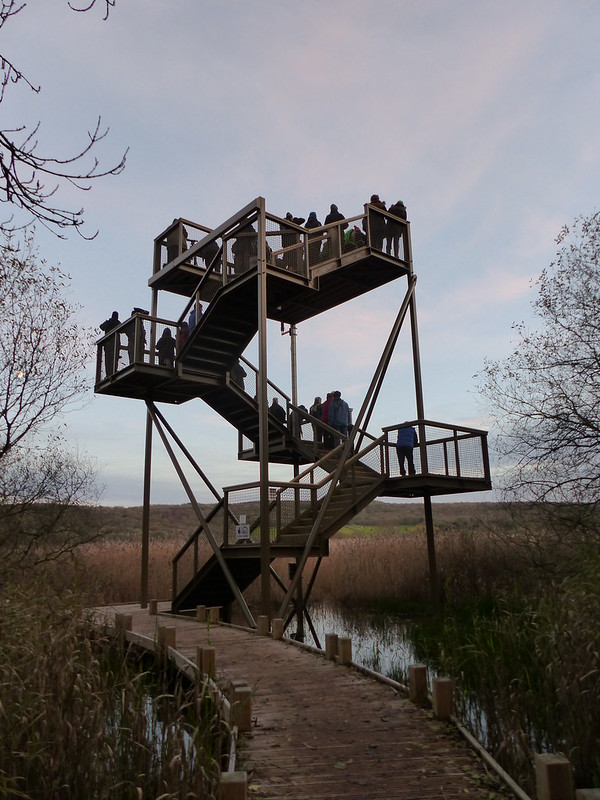 The quotes about Deepdale are from this pdf which has a suggested walking route:

Or: Fleeting Moments of Wonder III

Below and to the west of the Open Field Surrounded by Woods (see above) on Cringle barrow is the mysterious hollow of Deepdale. By the pond, or marshy area, at the bottom of Deepdale is a badger sett. I usually swing by, when I’m this way on, to see whether it looks like the sett is occupied.

The areas around the entrances show plenty of evidence of recent digging and no end of footprints – though whether these are badger prints or not – they were all quite indistinct – is hard to say. I read “A Lifetime of Badgers” by Peter Hardy (badger enthusiast and labour MP, later Baron Hardy of Wath) earlier this year and apparently badgers will keep a number of setts in an area, and may move from one sett to another, at times abandoning certain setts. I don’t know where there are others in the area. Sadly I did see a dead badger on the road near Milnthorpe recently.

Many, many years ago I came this way one summer evening and sat hoping to see badgers. I didn’t, but I did see lots of roding woodcock and quite a few red deer. In the trees it’s quite hard to see the setts clearly from any sort of distance.

Last Saturday we had a short walk in Eaves Wood. There was much tree climbing – one of my cousin’s daughters is even more fearless than our kids. There was also a spot of den building – or more accurately den restoration.

On Thursday I was once again commuting home from Carnforth on foot. I suppose that may be the last one for quite some time – the clock’s go back, for a couple of Thursday’s I have to go back to Lancaster before going home and in the spring it seems I may no longer be spending my Thursday afternoons working in Carnforth – I shall certainly miss my walk home.

I didn’t take many photos – the afternoon began dingy and just got progressively more gloomy until I finished the walk in near darkness. The field path from Millhead to Warton wasn’t as flooded as it can be, but there was still a large area of water in one of the fields. I counted eleven swans in all on and around the water.

Much as I’ve enjoyed climbing Warton Crag I decided to ring the changes and instead walked through Hynning Scout Wood.  Almost immediately I found a couple of prickly sweet chestnut cases each of which had some green but good sized nuts. This was an unfortunate fluke because I then spent quite some time looking for more and after that I only found small thin nuts with no real substance to them. Besides which, when I tried one of the green nuts it had that distinctive chestnut taste (which I love) but was not sweet at all – quite the opposite in fact.

Beyond Hynning Scout I went on into the woods on Cringlebarrow. I couldn’t resist the diversion down into Deepdale – a steep–sided hollow which someone once told me is actually a crater resulting from a meteorite impact – I have absolutely no idea how true this is but I like the idea. There’s a pond at the bottom of the hollow – or at least there was – it’s green over and seems to be more of a bog than a pond now. There’s also a badger sett here – or what I have convinced myself is a badger sett: I’ve never seen the badgers.

I climbed back up to the main path. A signpost directed me to Yealand Storrs and Round Top. I don’t really know what the latter is – I’ve never found a top on Cringlebarrow, but when the path dropped off to the left I followed the fainter path which carried straight on. It didn’t take me to a top, but it did take me to a lovely route down the end of the ridge which eventually met a good path which doubled back to the right of way. Whilst I dropped through the trees here the sun must have dropped below the level of the clouds – I couldn’t see it, but the tree tops were suddenly lit a lovely honeyed gold.

The rest of my walk took me through Yealand Allotment, around Haweswater and finally through Eaves Wood. I walked for over three hours, almost all of which, after I entered Hynning Scout, was in woodland. Can’t be bad.