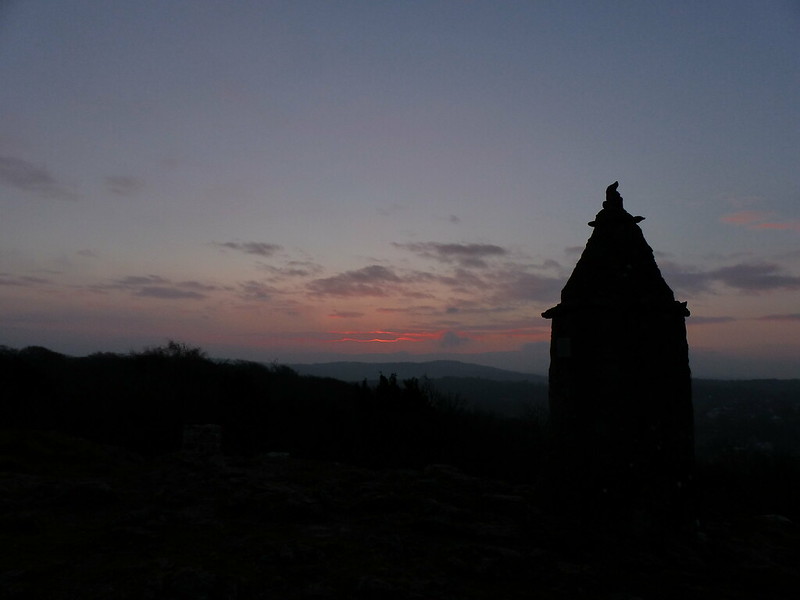 The forecast for last weekend wasn’t dreadful, but it didn’t create much gleeful anticipation either – it was for dry weather, but cloudy and dull. Actually, on the Saturday morning (when I was busy) there was a bit of sunshine, but when I got out for a walk in the afternoon it was so gloomy that I didn’t bother to take any photos at all.

On the Sunday morning, neither of the boys were playing rugby and I had contemplated setting off early and heading out for a walk in the hills, but, given the forecast, decided to walk from home instead. I was still out quite early, in time to catch the sunrise from Castlebarrow, by the Pepper Pot, or so I thought, but perhaps due to the cloud low in the eastern sky, the sun didn’t actually appear until I was heading through the woods towards the Ring O’Beeches. 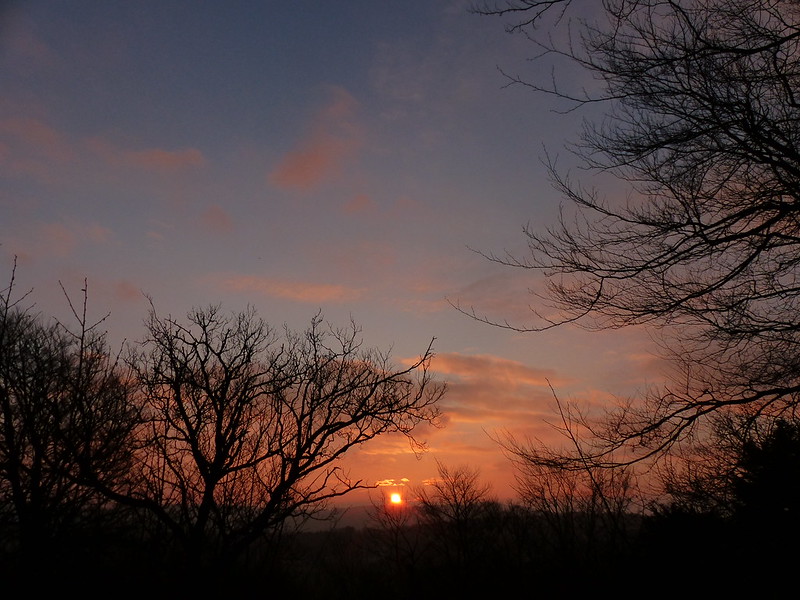 I suppose it was the low trajectory of the winter sun which enabled me to apparently take several sunrise photos, each from a new vantage point, with probably about 50 yards between them. 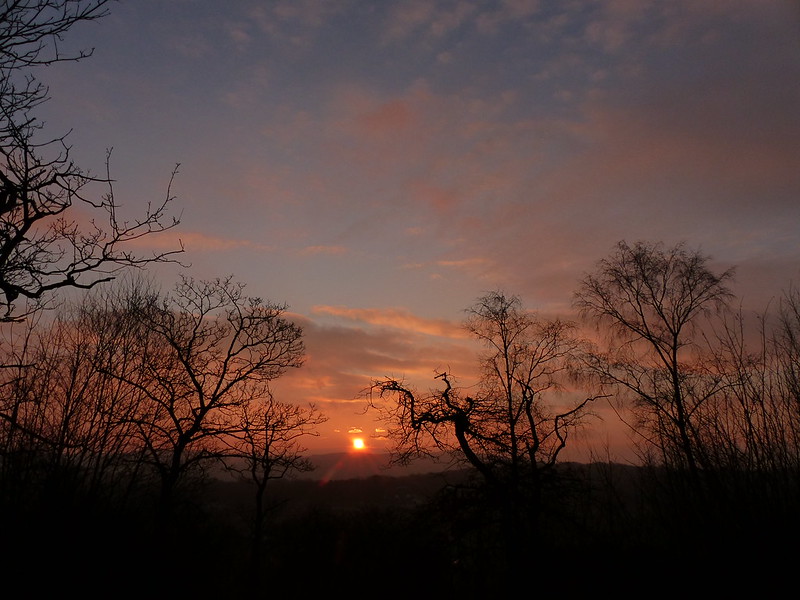 This was a bit of a surprise: pale blue sky and clear sight of the sun. 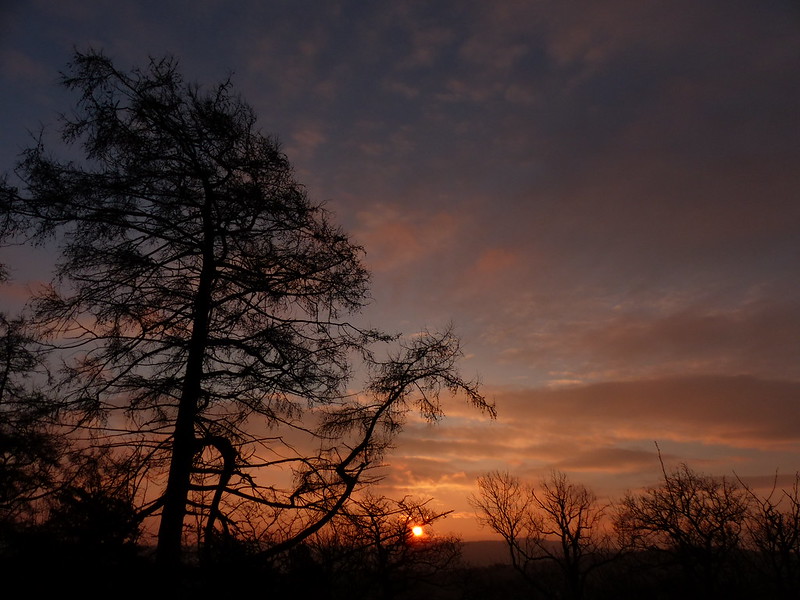 From the boardwalk by Hawes Water, Challan Hall was catching the early light. Two Cormorants were interrupted by my presence and circled above the lake, before roosting in their usual spot in the dead tree on the far shore. 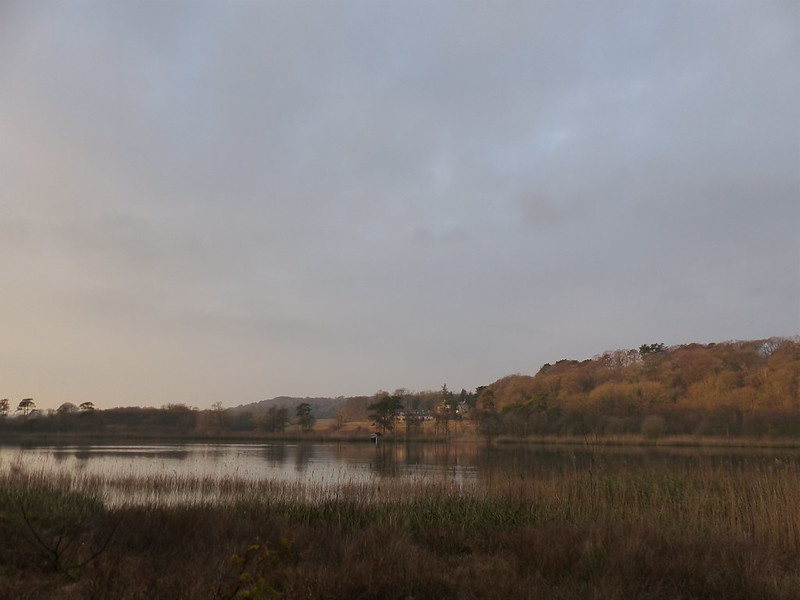 In the fields near Hawes Water, I was entertained by a pair of Buzzards, one of which eventually  flew across my view, tantalisingly close to my lens, but sadly the only photograph I was quick enough to take came out blurred beyond recognition.

I was a little concerned that the forecast had misled me into making a poor choice and thought that a short diversion to the minor hummock of Thrang Brow would give me a clearer idea. I haven’t been there for a while; it has a view of the Lakeland hills, although nothing to rival the view from Arnside Knott or Haverbrack. Or rather, sometimes it has a view of the Lakeland hills; on this occasion I couldn’t see anything much beyond Arnside Knott and even that was a bit lost in the haze. 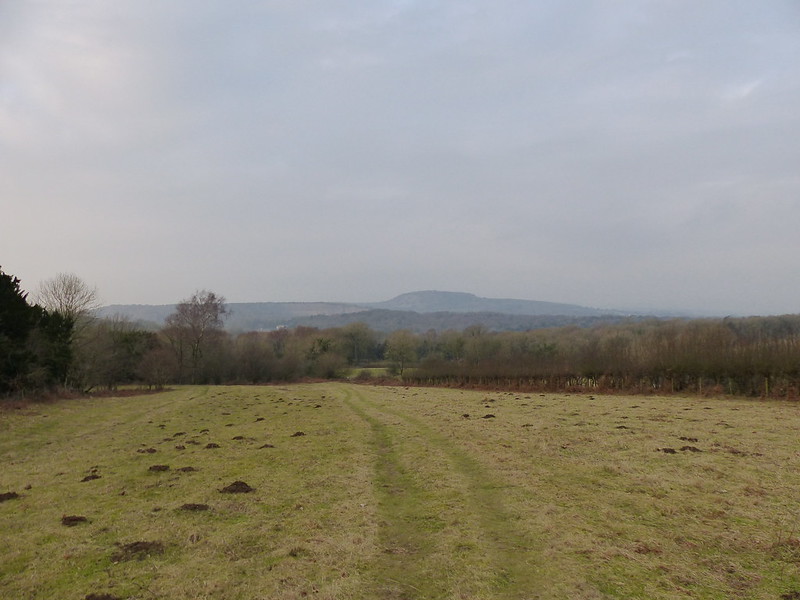 I’m glad I went that way though, because then I remembered a small trod which wends it’s way through the woods and limestone pavements of Yealand Allotment and which I haven’t followed for quite some time.

My original plan, when I reached Yealand Storrs, had been to follow the road for a while and then climb into Cringlebarrow Woods, but for some reason I decided instead to cross the road and follow the path across the fields towards Leighton Hall. I hoped that the fields might have dried out a bit after a relatively rain-free week, but actually the going was very heavy. My hastily amended plan involved turning left at Leighton Hall Farm to cut up to Deepdale and so to Cringlebarrow Woods that way, but I could hear heavy machinery in operation and, thinking that there was some tree-felling underway, changed my mind again. Past the Hall and up Summer House Hill it was. 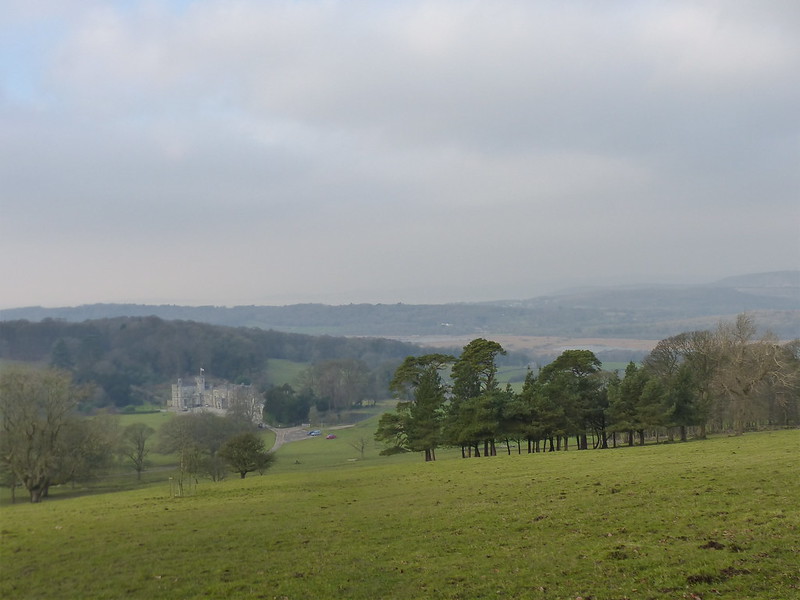 The view from Summer House Hill can be a cracker, but once again, anything at all distant was looking a little murky.

The field at the top of the hill had bluey-green, or greeny-blue….stuff…spread across the surface… 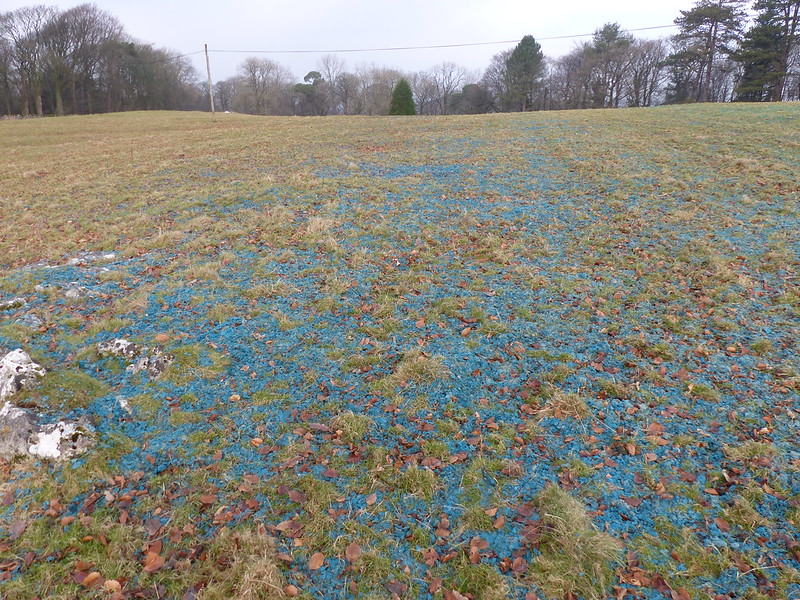 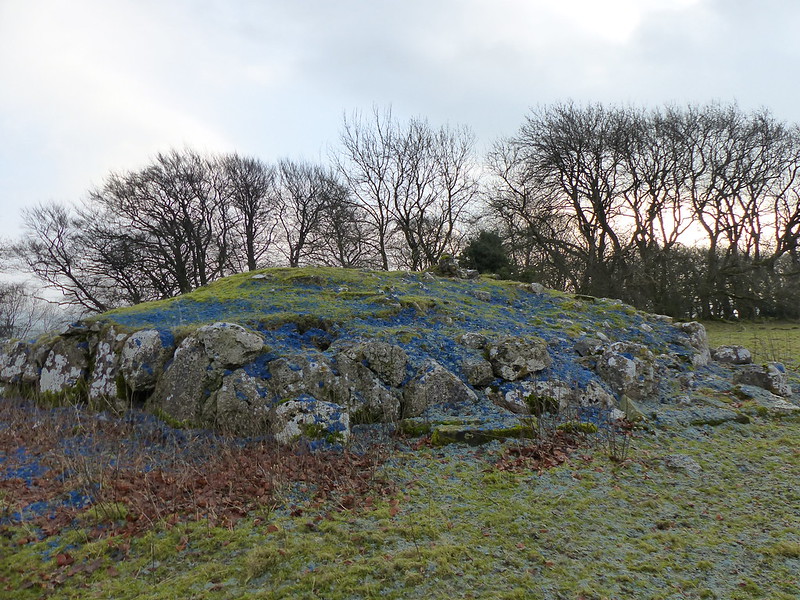 …is the base of the former summer house which gives the hill its name. It had been very liberally…blued… 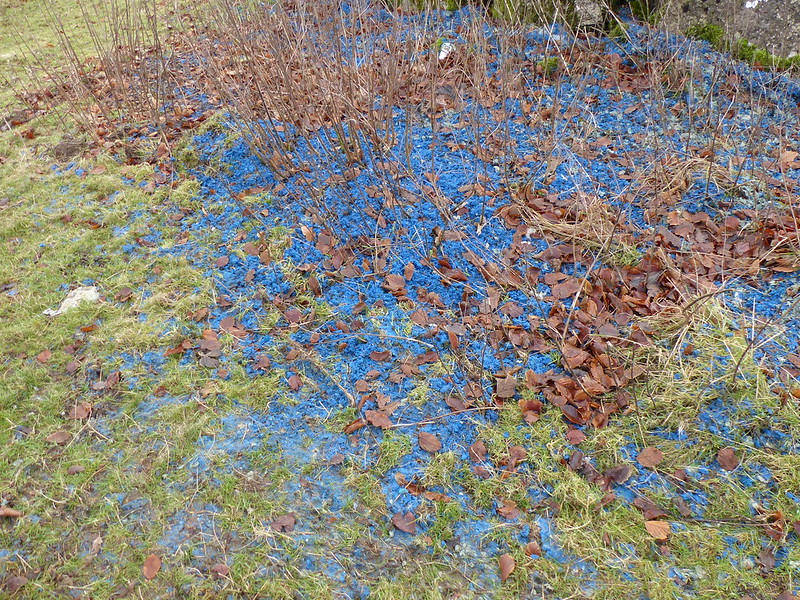 Does anybody have any idea what this is? 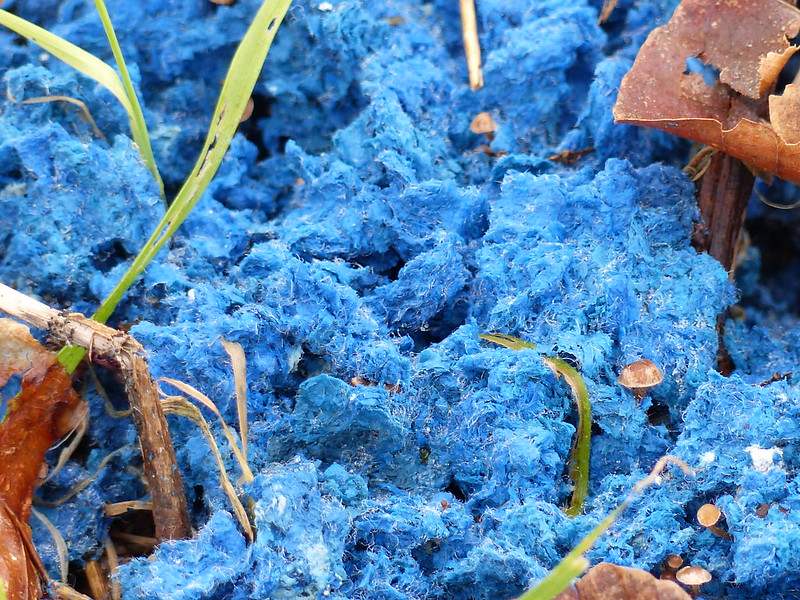 I’d just said hello to a couple who were walking with their dog, when I was surprised to see a Jay sitting calmly in a tree relatively close by. It’s not that I don’t see jays – I do – but that having seen them, I then usually almost immediately lose sight of them, because they are generally very shy and soon make themselves scarce. Since this one didn’t fly off, I thought I would play my customary cat-and-mouse game of edging forward with my camera and taking another photo every couple of strides. To my surprise, the Jay flew  toward me, down to the ground and then continued to hop in my direction before stopping to grub around in the leaf litter. 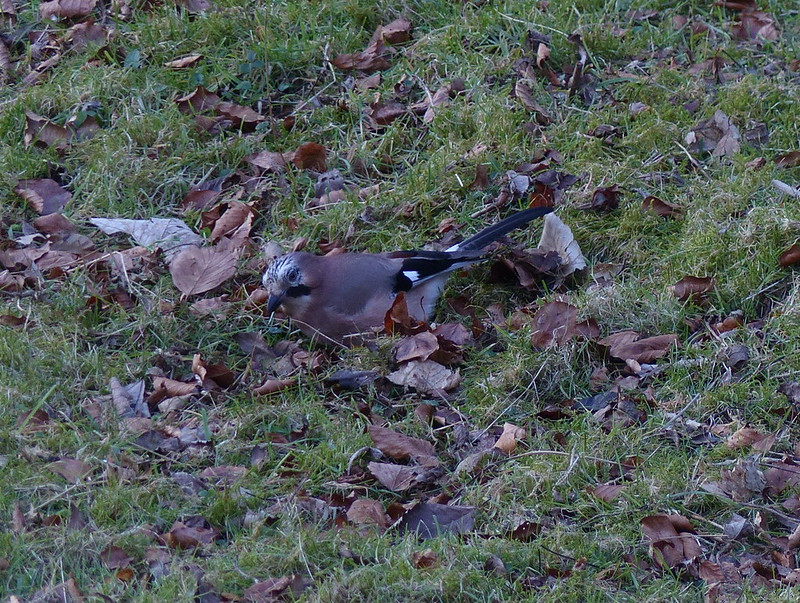 It was a shame that the sun wasn’t still shining: Jays are so unlike their monotone Corvid cousins, with their pink and blue plumage and their striped head. 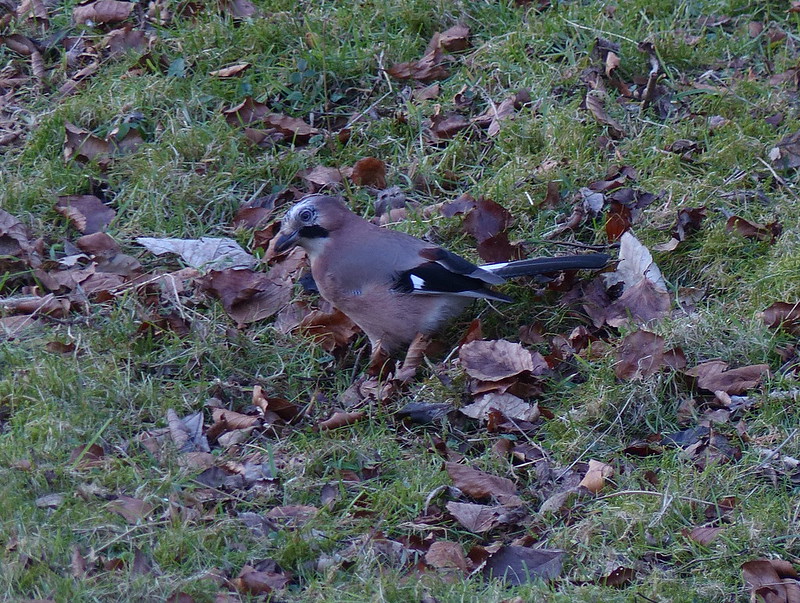 Fortunately, the sun was soon shining again, if perhaps a little weakly in the haze. 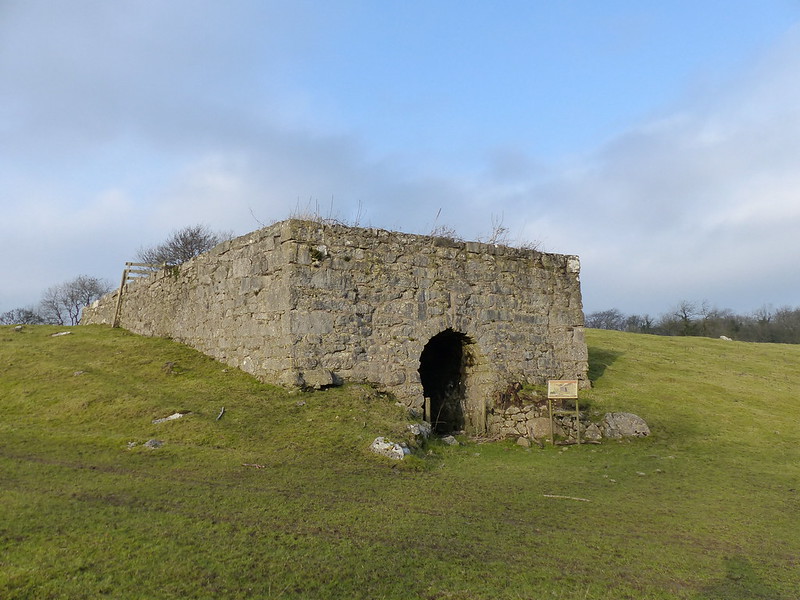 Lime Kilns are a bit of a feature of the area and I often pass them on walks, but rarely remember to take photos of them.

The same could be said of sheep… 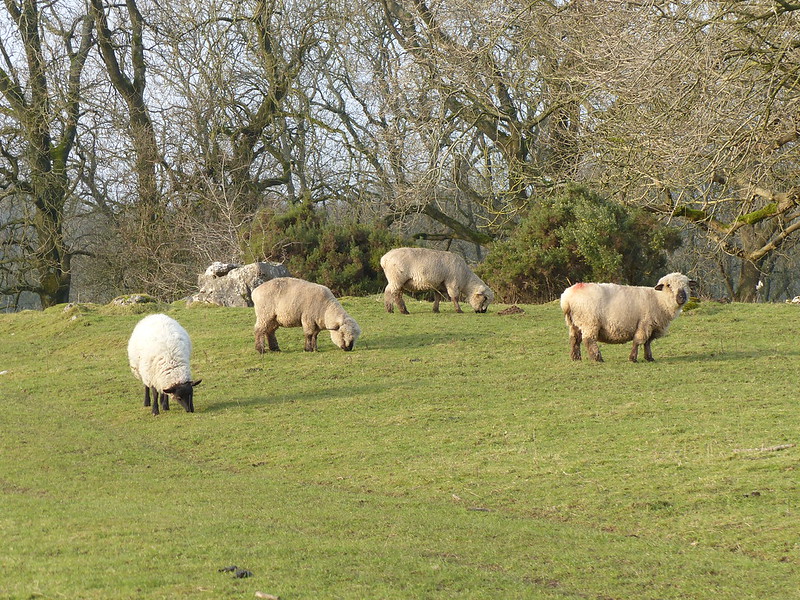 …these few stood out because they are of an unusual breed for this area (I can’t work out which). 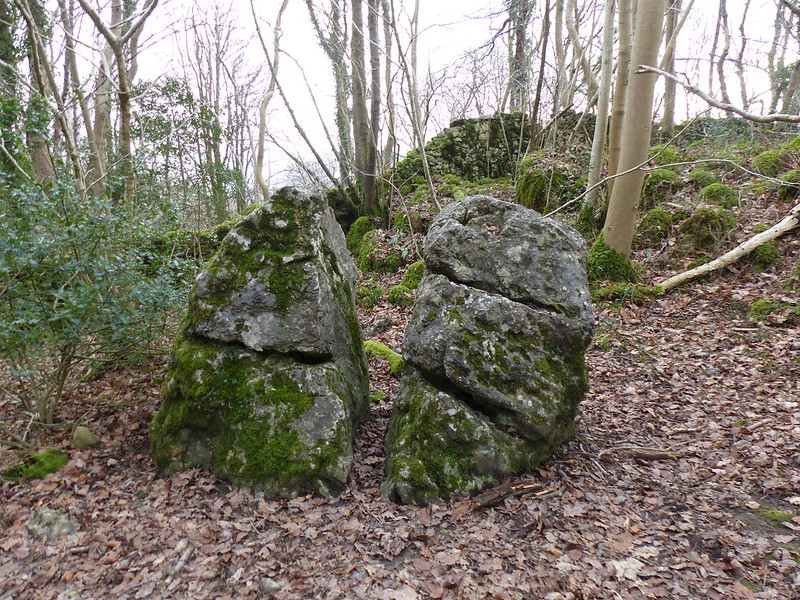 There’s been a fair bit of tree-felling near the top of Warton Crag, which I think will take a little while to get used to. The view from the top was predictably limited… 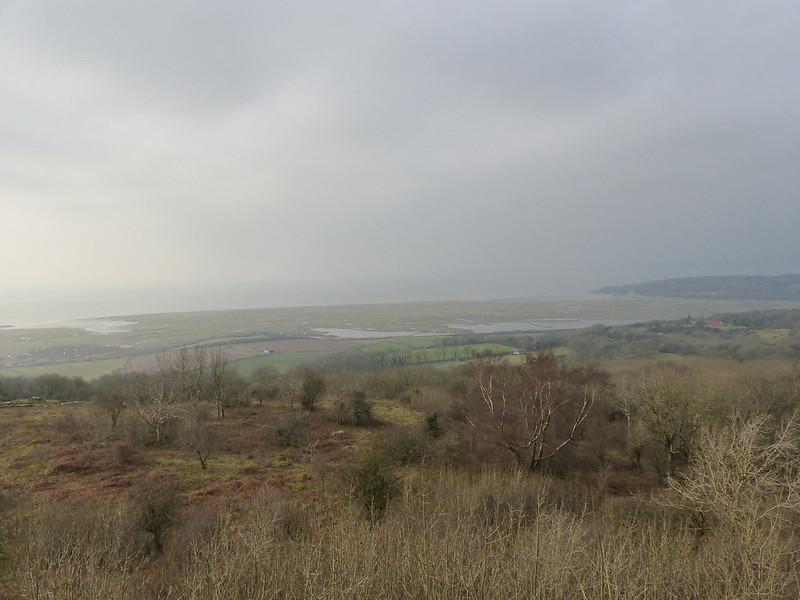 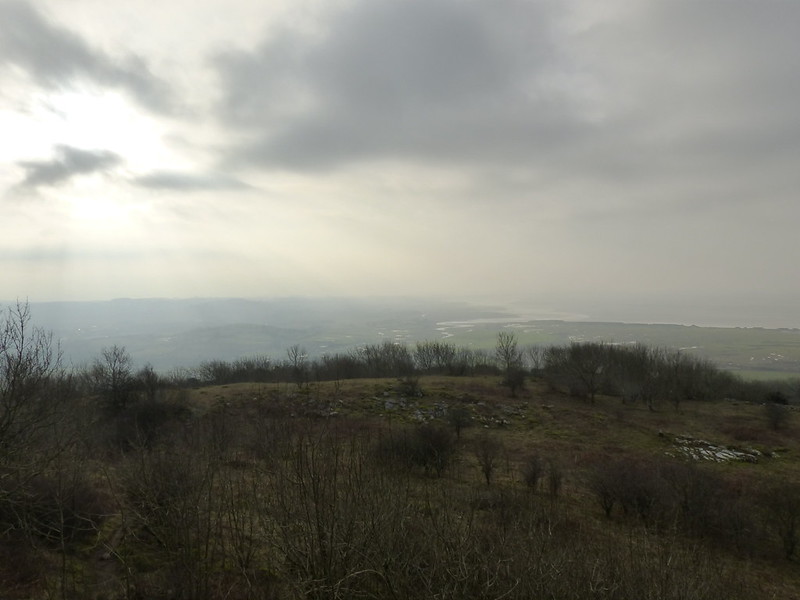 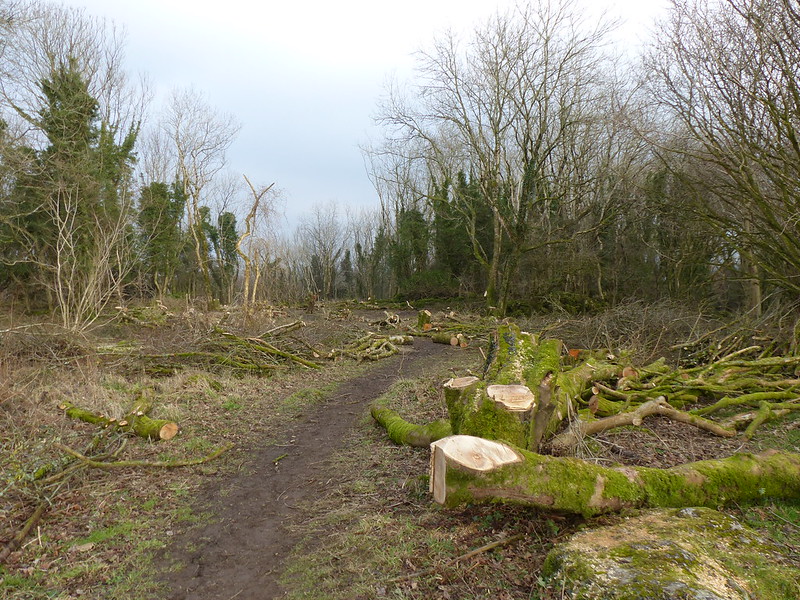 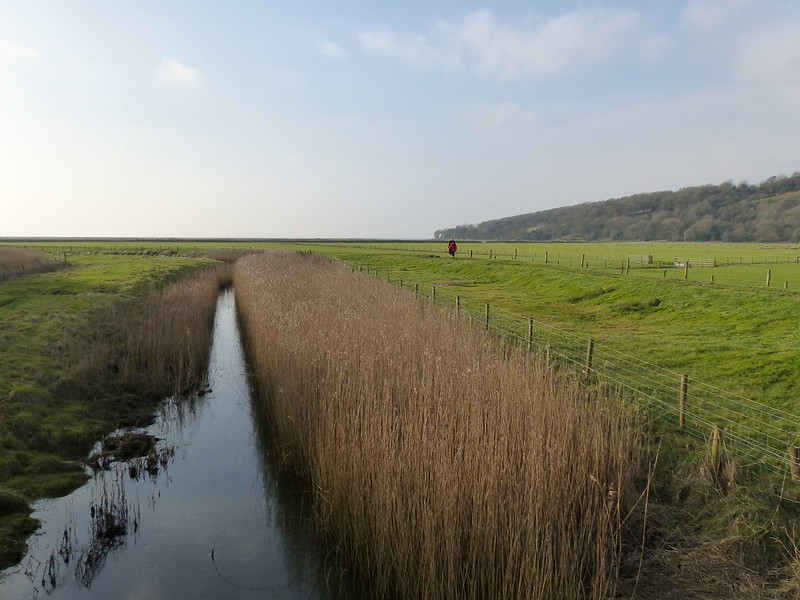 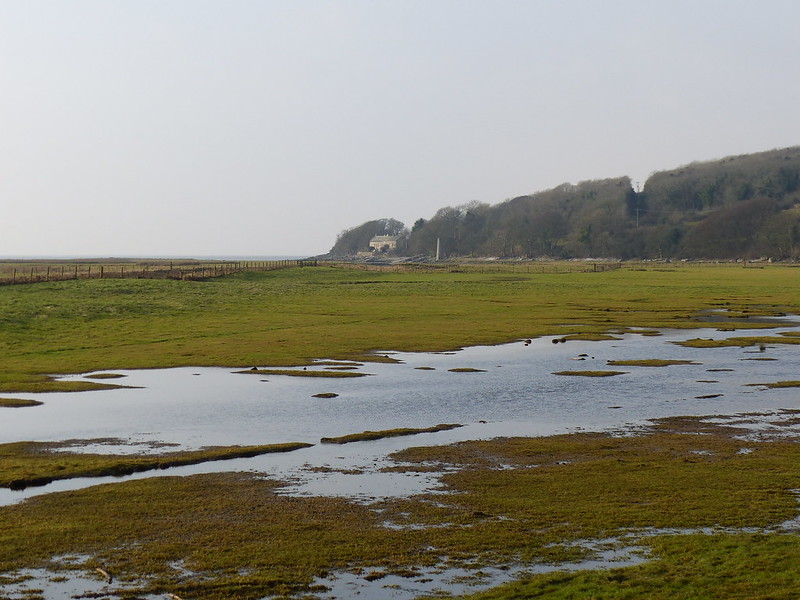 Brown’s House and the ‘smelting’ chimney from Quaker’s Stang.

For the last part of my walk the sun came out again. 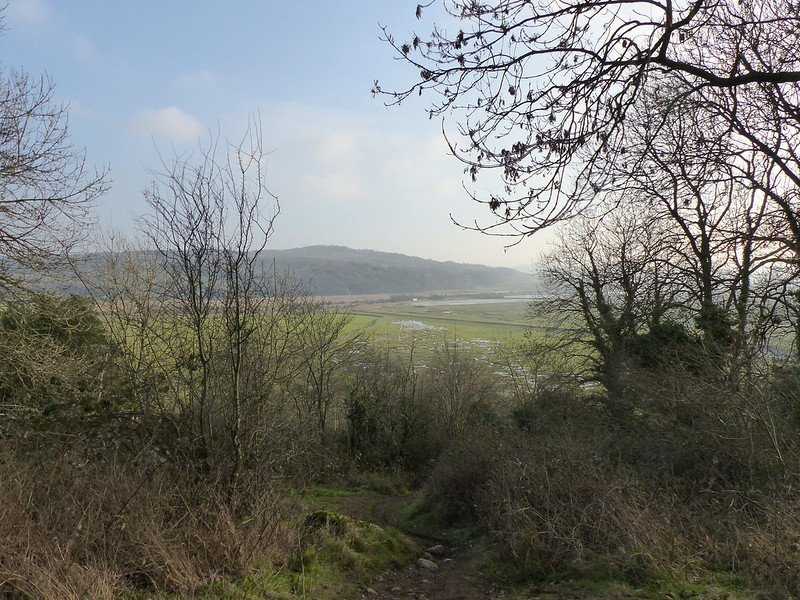 Warton Crag and the salt-marsh from Heald Brow.

I like this time of year: it’s still winter, with the possibility of snow and ice, which is fine, but it also feels like we’re sliding inexorably toward spring.

When all sap lies quiet and does not climb,
When all seems dead, I cultivate
The wild garden rioting in my memory,
Count in advance the treasures which
The sleeping sap contains,

And winter runs from now toward
The waking of the sap and spring.

from Garland for the Winter Solstice  by Ruthven Todd.

Advertisement
Towards the Waking

Fields and their shape record ancient and less ancient history, and a map marking field boundaries will reveal very different patterns, including quite a few of the old open fields, each of hundreds of acres, which were particularly the rule in the Midlands. These great fields (two or three to a village, to allow for fallowing, i.e. for resting a field so that it regained its fertility) were frequently identified in name after the village they belonged to – ‘Yatesbury Field’, ‘Wootton Fields’ etc.

Or ‘Yealand Allotment’. TBH had dropped me off on the road beyond Yealand Storrs, where the path through the allotment begins. I followed the right of way for a while, but then turned up hill on a permission path in an open ride through this mostly wooded area. The ride is kept open in order to encourage butterflies. I didn’t see any of those, but did see…

…this, which I assume is a crane fly.

On the train in the morning I had been speaking to two American ladies, who asked whether what we were experiencing was typical September weather: on Monday we had heavy rain and fierce gales and the weather hadn’t improved a great deal since then. Of course, that is typical weather for this area at any time – predictably unpredictable. By the afternoon the skies had cleared and the sun shone. From the top of the ride there’s a good view over the meres of Leighton Moss. From there the path climbs to Thrang Brow which has an excellent vantage of the Lakeland Fells.

My onward route took me across meadows to the open area by Haweswater where I recently photographed devil’s-bit scabious and grass of Parnassus. With the sun beaming low across the lake, I decided to have another go…

I finished my walk along Moss Lane and through Eaves Wood. When I reached home the sun was almost setting…