These photos are from another end of September autumnal walk. It was the Sunday after my longish walk in the Bowland Hills, but the weather was much nicer and I was joined, at least initially, by TBH and Little S. (Who is, of course, now much taller than me).

We took our usual preferred route around the coast to Arnside. I think this might have been the weekend when this usually quiet route was thronged with people, presumably all enjoying the slight relaxation in the lockdown restrictions.

I have to confess to being a little jealous of the three people sailing small dinghies on the Kent estuary. It looked like great fun. I’ve done a bit of dinghy sailing over the years and have always enjoyed it. TBH and I are contemplating joining Arnside Sailing Club, although I suspect she is most enthused by the fact that they own a few stand-up paddle-boards.

After an alfresco lunch in Arnside, TBH and Little S left me for a direct route home, but, it being a beautiful afternoon, I was keen to prolong the walk.

The hedge on the coastal side of the caravan park at Far Arnside was full of Buddleia and Bindweed and they, in turn, were festooned with bees and butterflies, which kept me distracted for quite a while. Since I was on my own, there was nobody to moan about my entering ‘Butterfly Mode’.

The sands had looked so attractive from the Knott that I decided to drop down that way and follow the edge of the firm sand to Knowe Point.

I was intrigued by the potential of this mode of transport and, as is often the case, found myself lost down a rabbit-hole of Youtube videos. I have to say that low-level flying looked like terrific fun. I’m not much good with heights though, and this feat of daring gives me sweaty palms even when I think about it.

Meanwhile, at work, a new colleague has been talking about her husband’s love of land yachting, which looks more up my street and which these great expanses would no doubt be ideal for. The problem, of course, with paramotors, land yachts and sailing dinghies, is that they all require kit and cost money. With Shanks’ Pony you can get away with a cheap cag and a pair of shoes which is why I think it’s always destined to be my favourite way of getting about (although, of course, some people do seem to rather obsess over their endless gallimaufry of expensive gear). 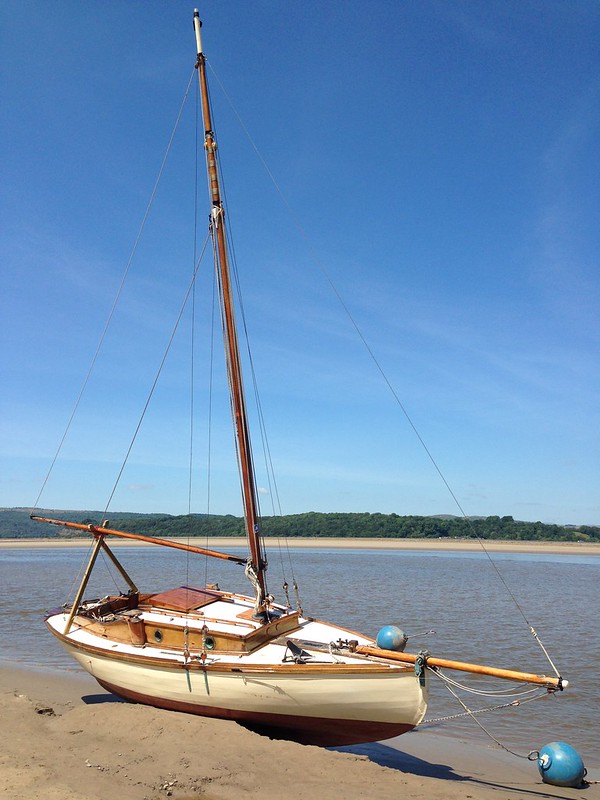 This is the yacht ‘Severn’. Recently bought by Arnside sailing club, thanks to a grant from the Heritage Lottery Fund. It was built in Arnside in 1912 at the Crossfields boat-builders, who also made Arthur Ransome’s ‘Swallow’.

What with the bread course on the Saturday, I didn’t see quite as much of the Art Trail this year as I usually do. (You can find statements here from many (all?) of the artists taking part) I still managed to get to the Silverdale Art Group exhibition in the Gaskell Hall and to the Church Rooms and the Methodist Church, both of which are close to home. On the Sunday, TBH and J were keen to get to Arnside. We had a look in a couple of the galleries there, and also in the Educational Institute and W.I. Hall, but we spent most time exploring the Ashmeadow Estate. 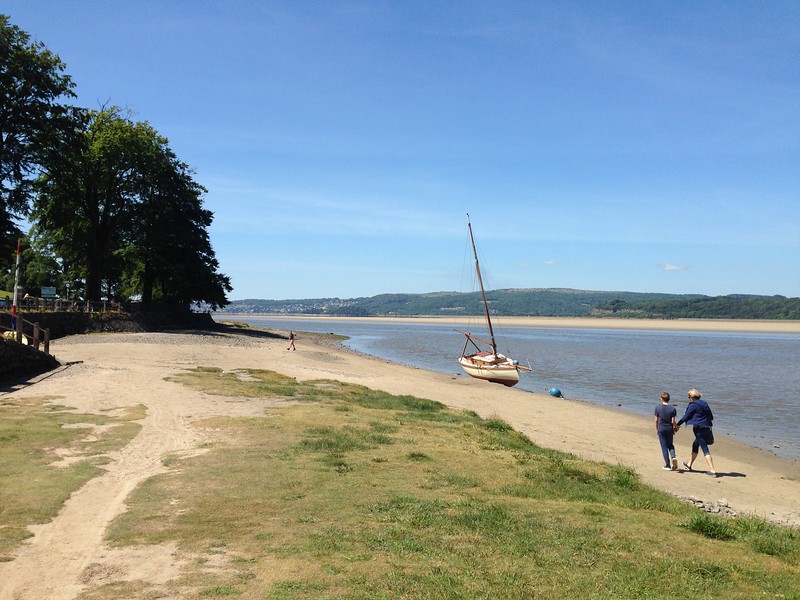 Part of the estate was left to the village. I’ve wandered around it before, but found that it is a little bigger than I realised. It has a small orchard, an enchanting walled garden and woodland stretching along the riverside. Artwork was dotted around the gardens, but my photos of it are very disappointing. I am going to include this… 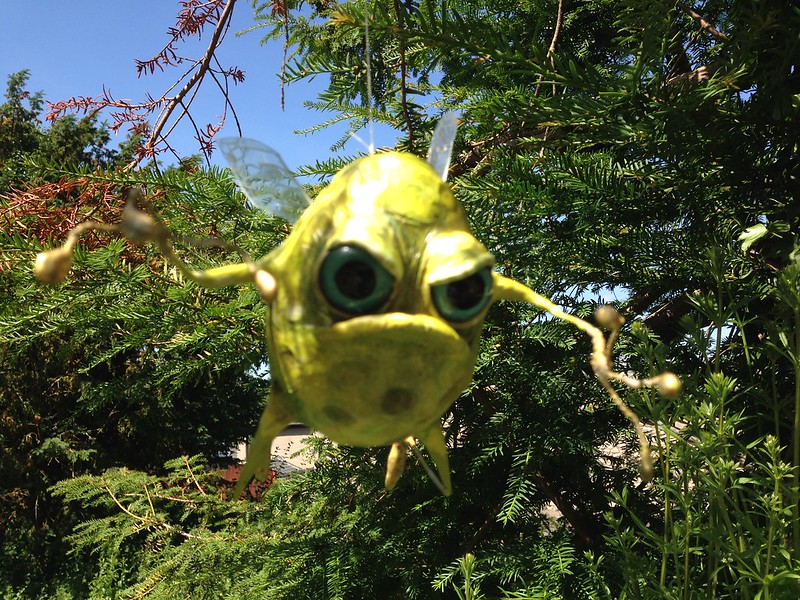 …out of focus failure, because we were all very taken by these characterful alien creatures – there were nine of them literally hanging around in the orchard, although we only managed to find eight. They’re made by Simon Hutchinson who calls them junkpunk.

As if to prove that it can take close-ups when the mood suits, my camera-phone cooperated when I wanted a shot of these particularly large Common-spotted Orchids in the walled garden… 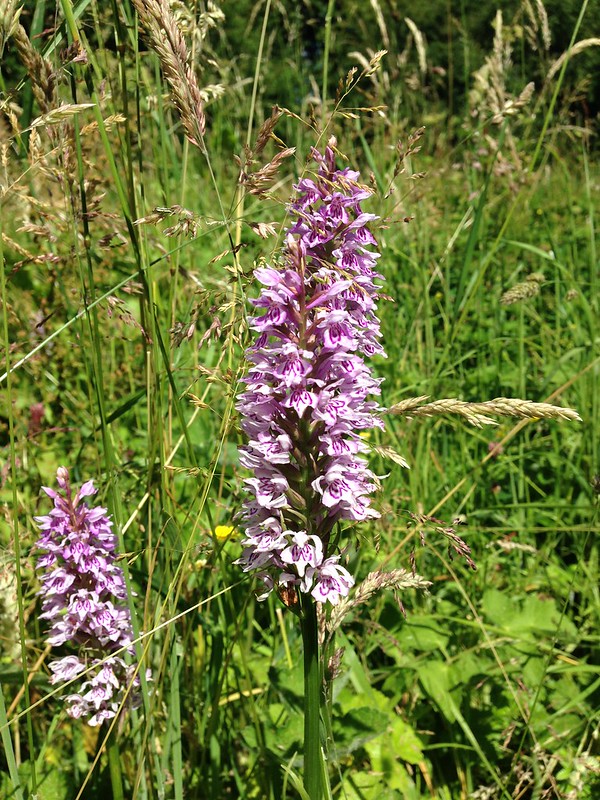 …much of which is now given over to a grassy meadow. 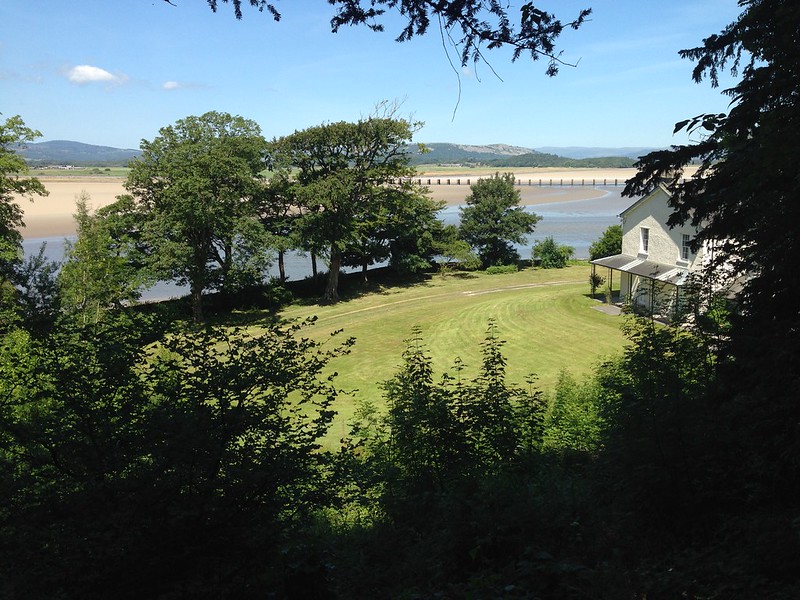 The house just visible above is Ashmeadow House, built apparently in 1819, but for much of it’s past, the home of Earnseat School. A former colleague of mine was a pupil at the school, in what must have been its last years, since it closed in 1979. These days the house  contains retirement properties.

Formerly, the grounds of Ashmeadow were even more extensive than they are now. This house… 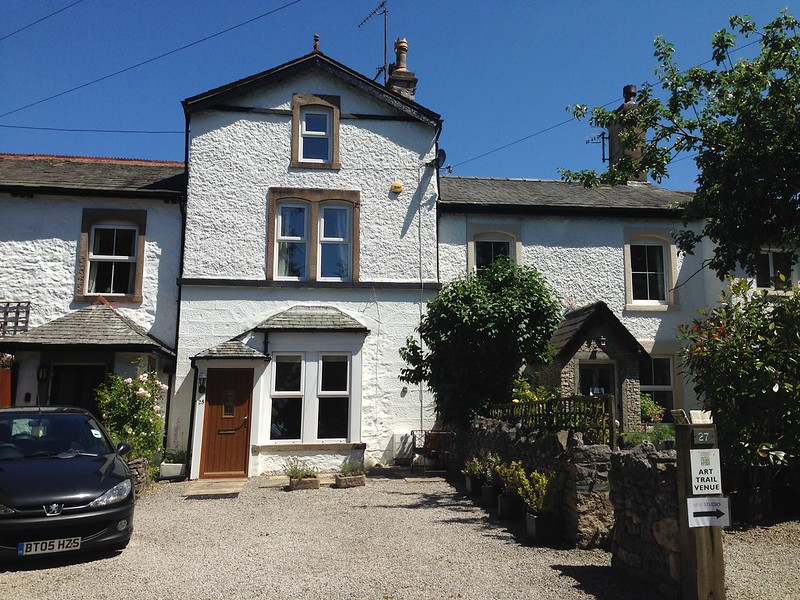 …where there was more Art on display, was once the Coach House and Stables for the estate.

Ever thought of building a Viking knarr (a trading vessel wider than a long-ship) and then sailing it along the west coast of Greenland, across the Davis Strait to Baffin Island and down the coast of Labrador to Newfoundland and a possible site of Vinland? Along the way you would be dealing with whales and walruses, icebergs and curious polar bears. You might meet an arctic fox and learn a little about the Inuit people of Greenland. Probably, you would find yourself hanging around waiting for favourable winds and dealing with tensions amongst your fractious crew. You might learn a little about your own limitations as a sailor and a boat builder. Why not do the whole thing in heavy replica Viking garb just to add to the discomfort?

Even if you would never contemplate doing any of these things, I can heartily recommend this very readable book. I suspect it will be the only book you’ll ever read which contains both a recipe for whale stew and also sketchy rules for the Greenlandic card game Kapaka.

(The format of this post is shamelessly lifted from mylogicisfuzzy, which as well as book reviews has posts about walks in and around London and also lots of information about baking. Imitation is the sincerest form of flattery they say.)

The church picnic was this weekend just gone. We went to Brown Howe on Coniston Water. Some people cried off because the weather looked iffy, but it turned out fine after a little drizzle.

The kids messed about in boats:

…messed about in boats.

S seemed to get in on a lot of the action.

How do I work this thing then? Can I take it out on my own? I won’t break anything, honest.

There was a barbecue, and civilised things like cups of tea.

One loon even went for a swim.

A splendid time was had by all.

Messing About in Boats