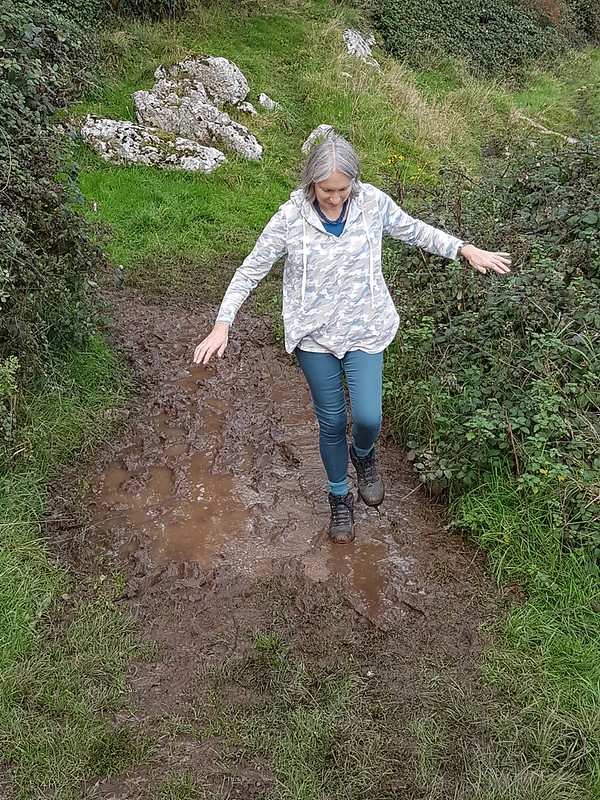 Muddy, by the looks of it. 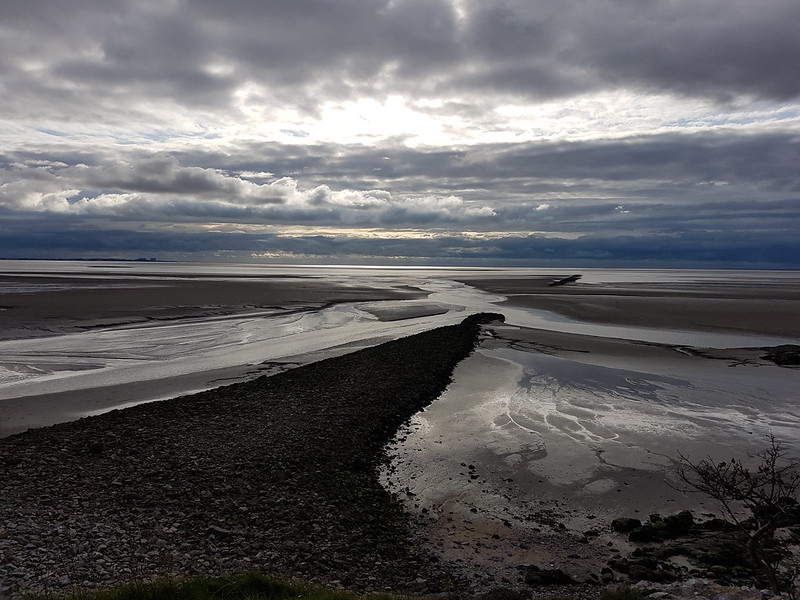 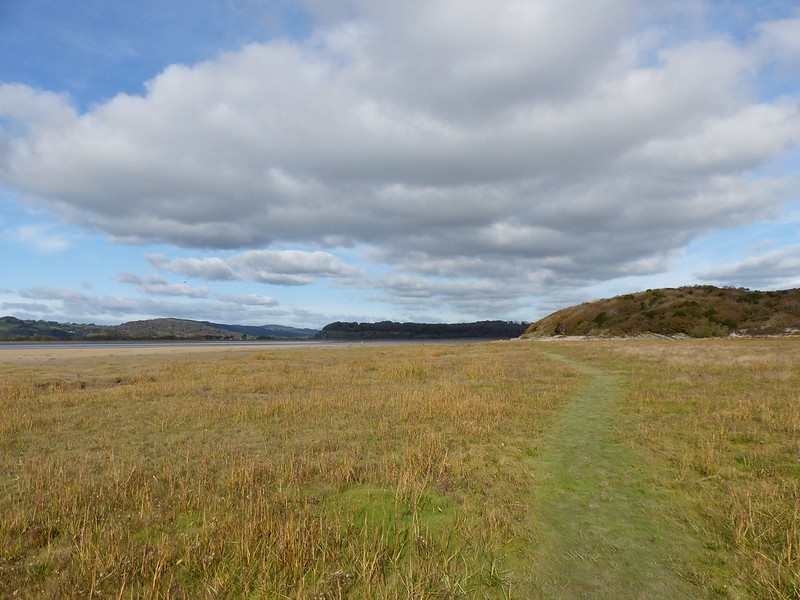 The salt marsh at White Creek. 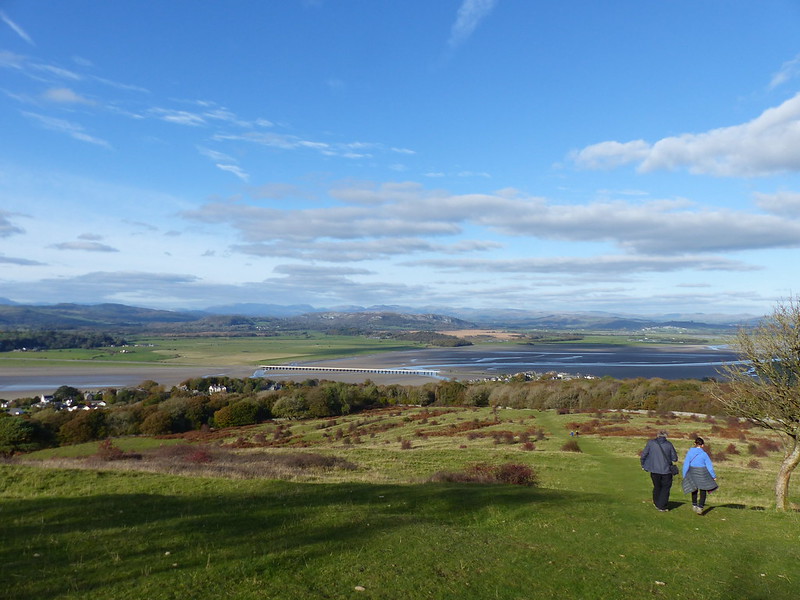 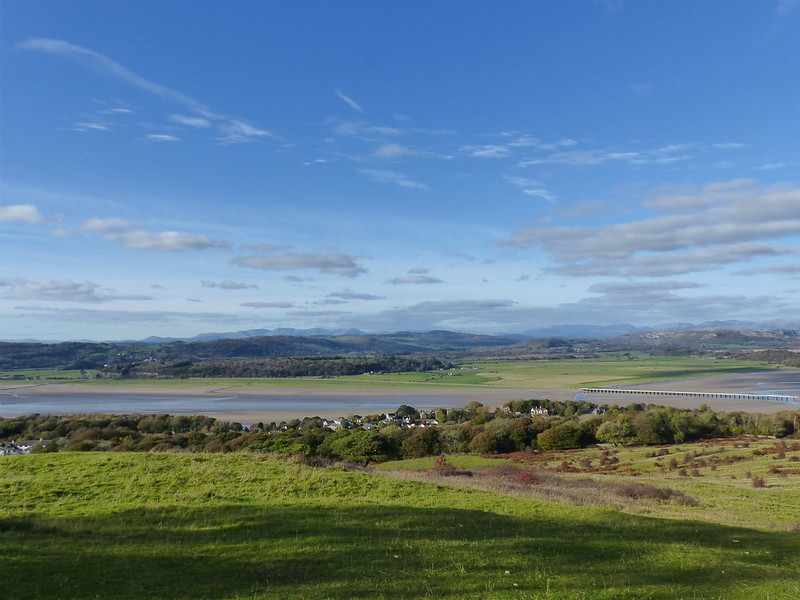 Busy too. These photos are from two walks with TBH, two of our favourite local options – a wander around Jenny Brown’s Point and a stroll around the coast to Arnside for lunch and back over the Knott. But, not much else to report, prior to a couple of trips at half-term…..

…probably his two most famous songs, but expect more in forthcoming posts. 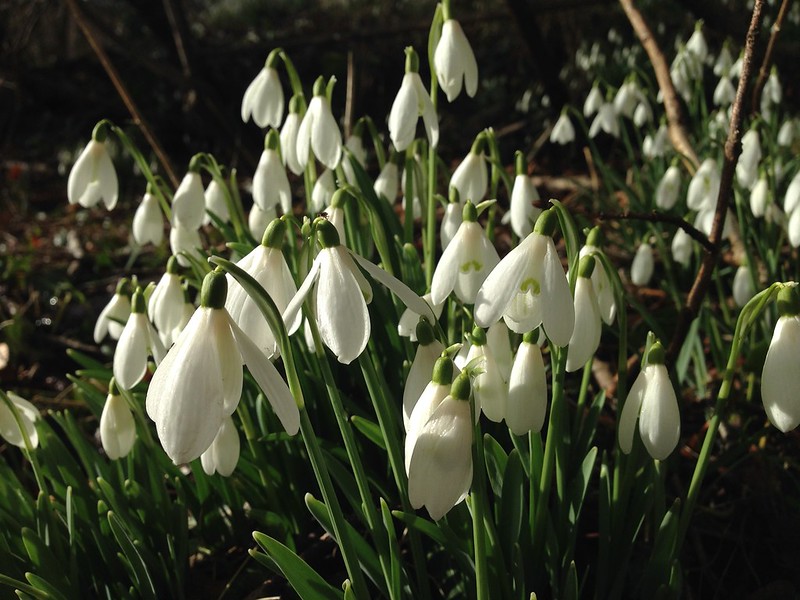 “The forecast for tomorrow shows every kind of weather, what a cop out.”

This was A, on Saturday evening; she knows how much this symbol winds me up on a long range forecast, suggesting, as it does, some straddling of the fence from the meteorologists. Of course, it could also imply that the weather is destined to be very mixed. That’s exactly how Sunday turned out.

No ‘Listed Lancaster’ posts from last week, not because I didn’t get out for any lunchtime strolls – although I was restricted a little, it was a busy week – but because when I did get out the weather was always gloomy and not really ideal for photographs. I particularly enjoyed my walk on Wednesday, when we had snow, but even the photos I took then are  rather grim and monotone.

Saturday too was very wet, but it did finally brighten a little late on, and I abandoned the second half of Ireland’s cakewalk against Italy to make the most of it. Not much to show for it in terms of photos of views or leaves or sunsets etc, but every walk seems to throw up something, in this case a wet poster… 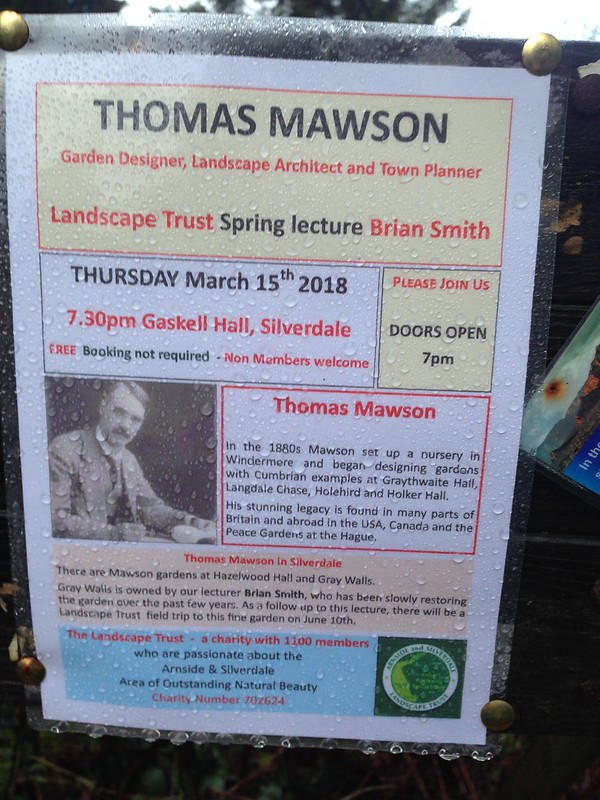 Long-suffering readers will know that I have become quite interested in Thomas Mawson and his gardens, which have featured on this blog a number of times. I’m hoping that I will be free on the evening of this lecture. If not, there were plenty of other things to choose from: a talk on ‘Bees in Your Garden’, another on ‘Sweet Peas’ and a third on ‘An Underwater Safari in Morecambe Bay’, music at the regular ‘Bits and Pieces’ event at the Silverdale Hotel, the John Verity Band appearing soon at the same venue, and, at The Instititute, Lancaster Band The Meter Men, who play Hammond Organ infused funk and are, in my opinion, superb. And that’s just a small selection of the entertainment on offer, seen through the filter of my own interests. Silverdale it seems, like Stacy’s Mom, ‘has got it going on’.

Anyway, back to Sunday: I set off, as I often do, without a clear idea of where I was going. Initially though, I chose to climb to the Pepper Pot on Castlebarrow, to take a look at the clouds racing past. I went via the Coronation path because I knew that would take me past the Snowdrops which featured at the top of the post.

From time to time, new paths seem to appear in Eaves Wood, a reflection, I suppose, of how many people regularly walk there. Whenever I walk past one, I wonder where it goes and resolve that, next time I’m out, I’ll find out. On Saturday I finally acted on that impulse. The first path I followed cut a corner between two paths which I know well. Even so, I felt very pleased to have taken it and I’ve been back and walked it again since.

From Castlebarrow I followed the path along the northern edge of Eaves Wood, beside the wall which marks the boundary between Lancashire and Cumbria. I met a couple walking their dog, who emerged from the trees at the side of the path. Looking back from where they’d come I thought I could detect the thinnest of thin trods, a hint of a path. Naturally, I followed it and it brought me to a drystone wall, in a spot where an old ants’ nest against the wall made it easy to scramble over. It was evident that people had climbed the wall here. I could see that just beyond the wall was the rim of Middlebarrow Quarry… 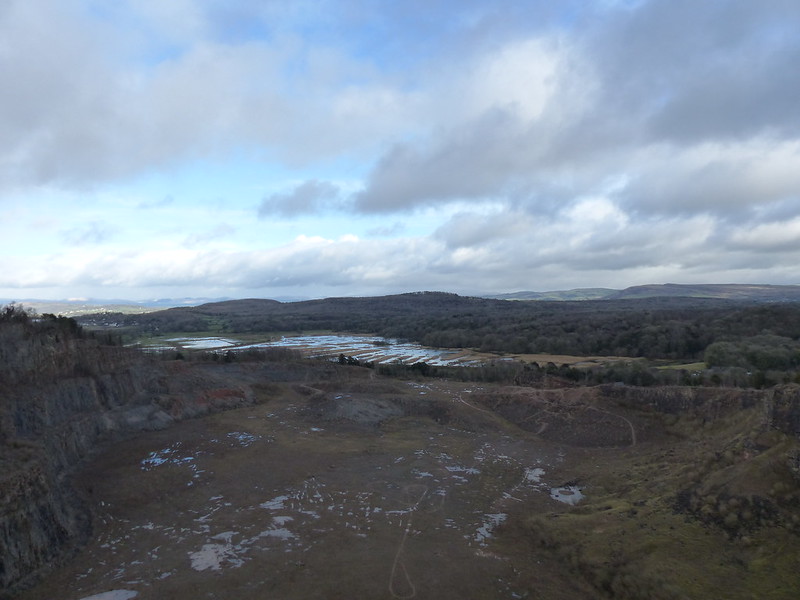 The quarry is huge, but is well concealed from most directions. Again, I thought I could see a path heading along the edge of the quarry. In all the years I’ve been here I’ve never walked around it. It is private land, but it’s not a working quarry anymore and I can’t see what harm could be done by wandering around. So I did.

Middlebarrow pano. Click on it to see enlarged version.

The path turned out to be a bit sketchy in places. And it was easy to lose where there was limestone pavement… 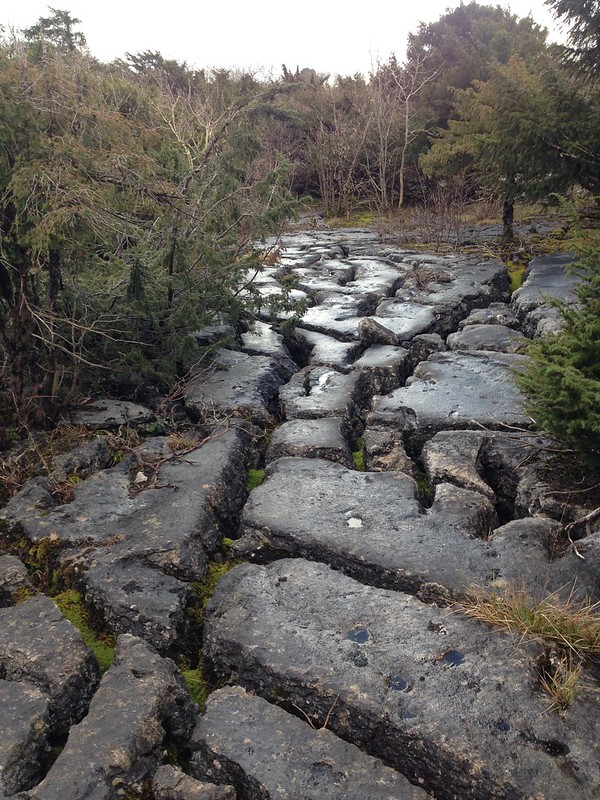 Some of the pavements were coated in moss, others had grass growing over them, which made it hard to see the grykes.

True to form, the weather threw everything at me: rain, sleet, hail, but odd moments of sunshine too. 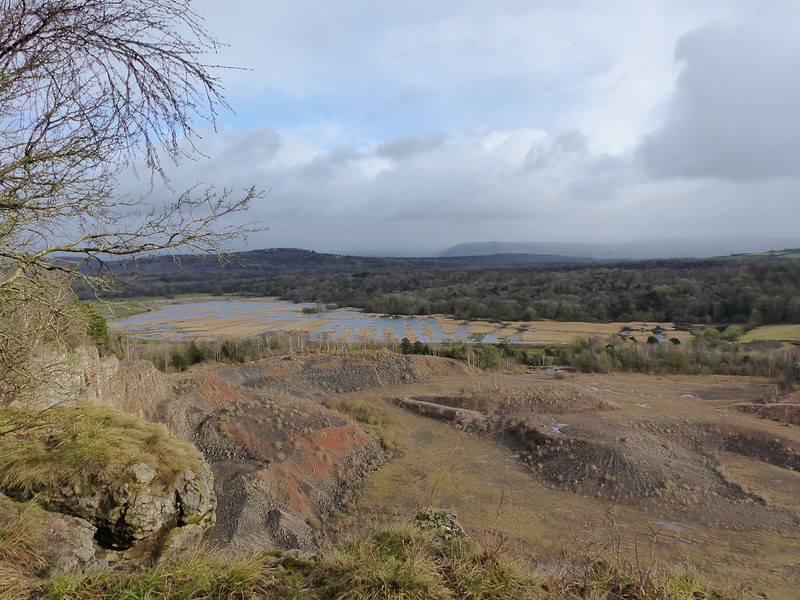 There’s a ninety metre contour somewhere around the rim of the quarry, making it the highest point on the limestone hill on which Eaves Wood sits. It’s certainly a good view point for Silverdale Moss and I shall be back here again. 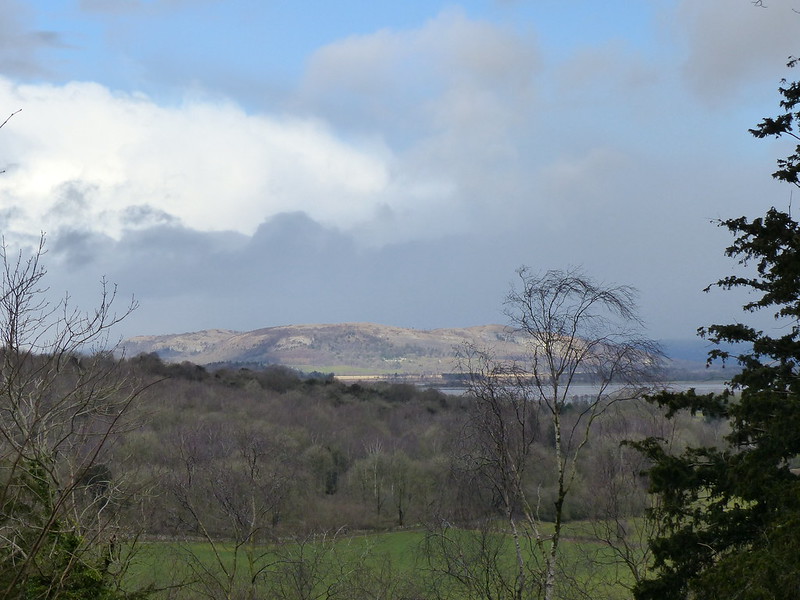 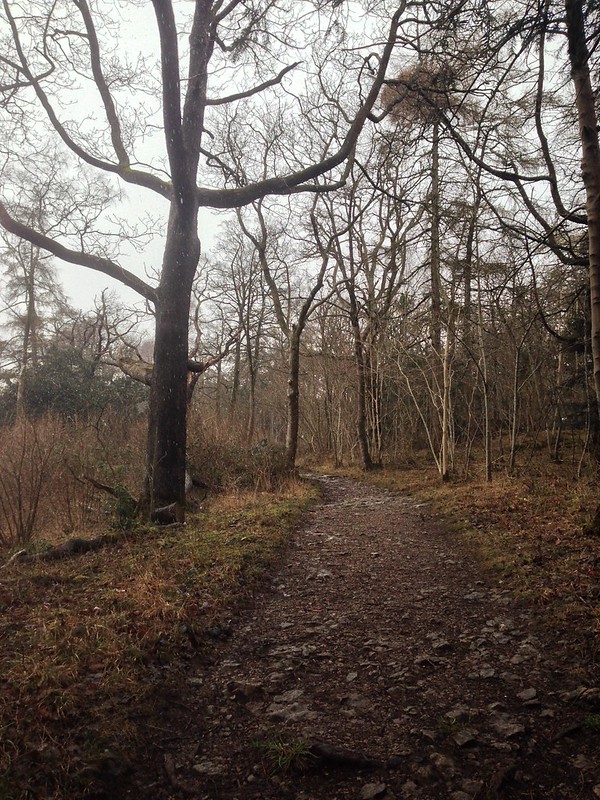 I took this photo in an attempt to show the heavy snow which was falling. You’ll have to take my word for it. 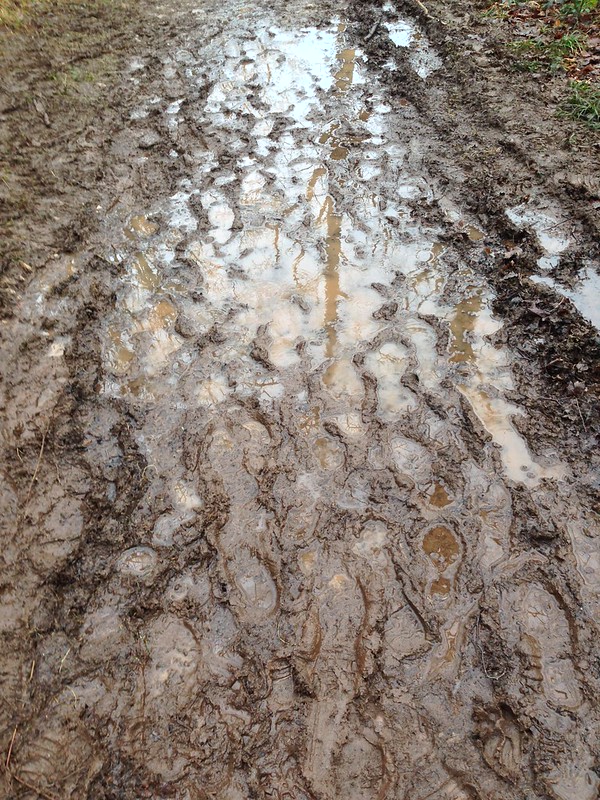 And this one to show the state of many of the paths after the wet weather we’ve endured. 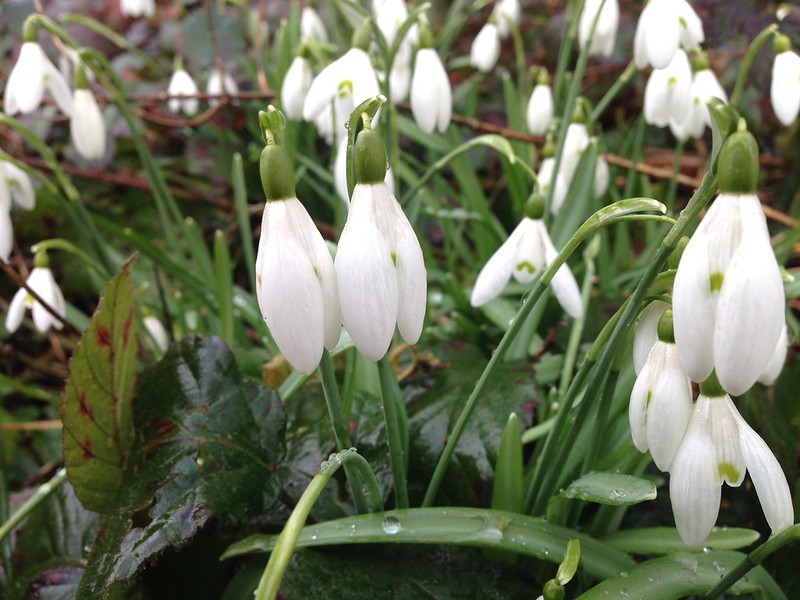 By the time I was leaving the woods, the snow had stopped again.

I timed my walk to arrive back to watch England squeak past Wales in the rugby by the finest of margins.

Then I was out again. Since it was still cloudy, and I knew I was too late for the sunset, I only took my ‘new’ phone with me and not my camera. 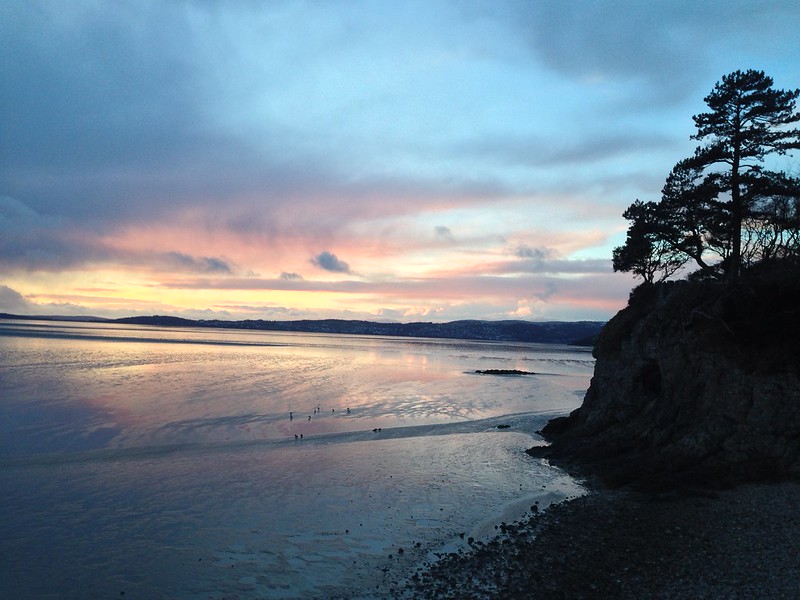 The colours were subtle, pastel shades, but very pleasant none-the-less. 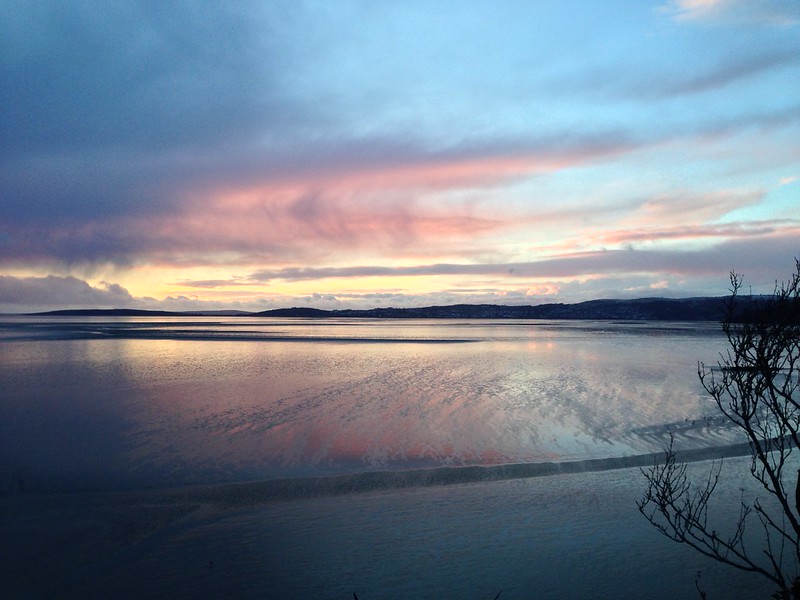 Always good to finish a day (and a post) with a colourful sunset, if you can. 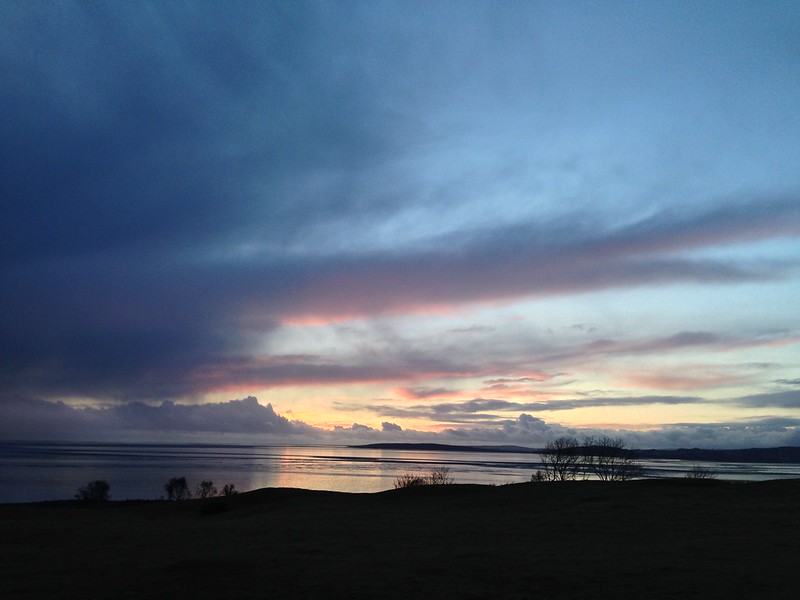 Middlebarrow in Every Kind of Weather.

A very pleasant weekend in convivial company. We were joined by my Mum and Dad and by my cousin and her family, visiting from Germany. On Saturday we walked around the coast to Arnside and discovered the very simple pleasure of making mud balls and throwing them against the cliff…

They made a very satisfying splat on impact.

When I approached too close, they even managed to fly away whilst joined together like this. A bit of internet research reveals that the male (the red one here) has deposited sperm in special receptacle on the underside of his own body. He is grasping the back of the female’s head with claspers in the final part of his abdomen whilst she is reaching forward with her own abdomen in order to collect the deposited sperm. I would assume that theses are common darters except for the fact that my my guide says that the female is yellowish brown which doesn’t seem to tally.