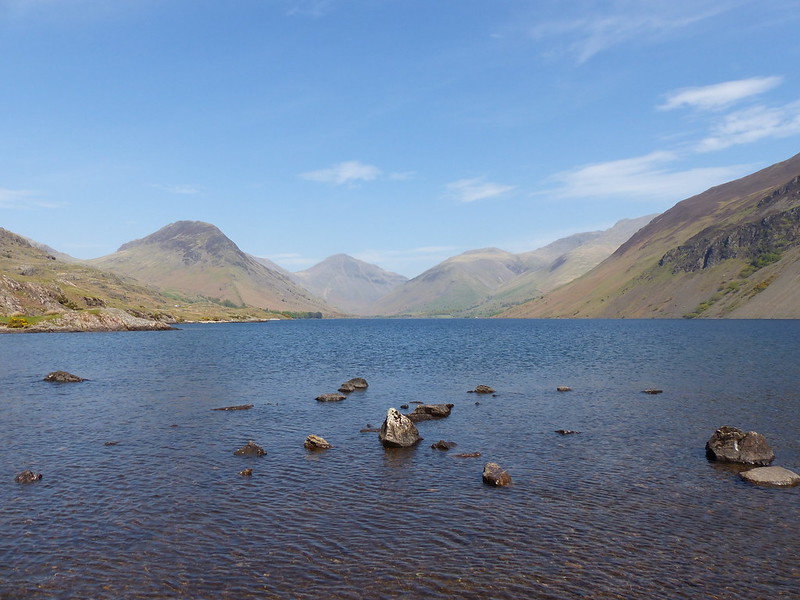 During our walk up Lingmell, we passed some very promising pools in Lingmell Beck. As usual B was very keen to swim. On the way up , we didn’t really have time, and on the way down we were also a bit pushed: I gave B an option and he chose a barbecue without a swim over a quicker meal with a swim. So, it would be a good thing if we could incorporate a dip into our plan for Sunday. A meanwhile, has problems with her knee at the moment, and it had swollen up and was uncomfortable, so a day without a walk would suit her. Once we’d packed up our tents then, we decided to drive down to where there’s parking close to the shore of Wastwater so that we could have a leisurely picnic and maybe a brief bathe. Having heard our plan, J, C and M opted to join us. For the picnic anyway. 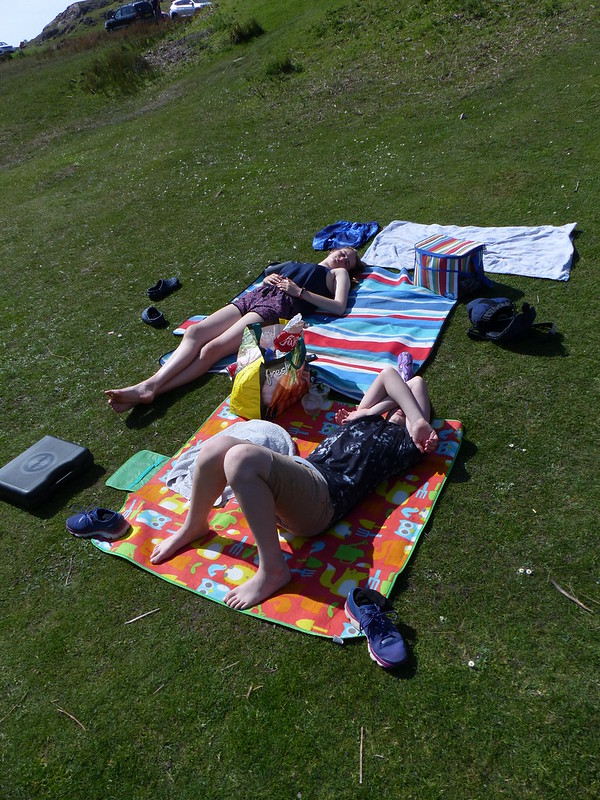 A and B chilling out.

We did a fair bit of loafing, picnicked, skimmed and threw a few stones… 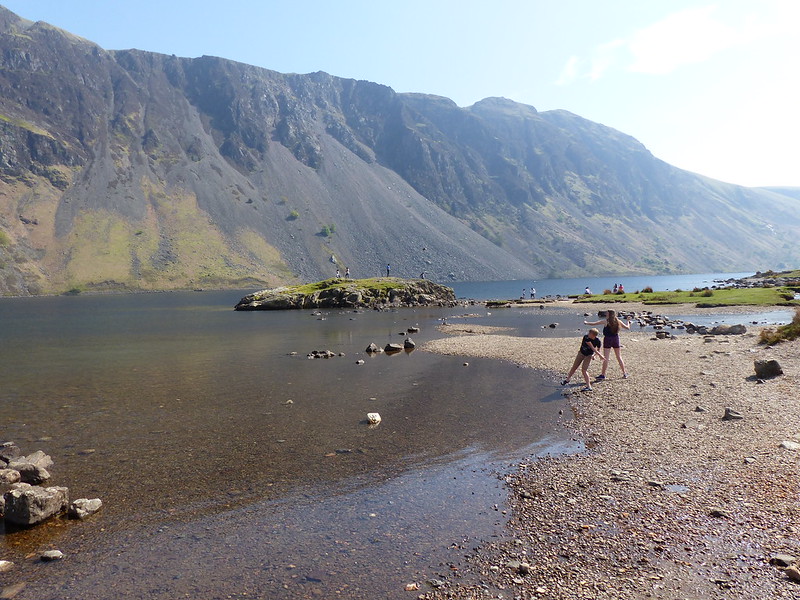 I watched a pair of Merganser’s out in the lake, hoping that they would come close enough in shore for me to get some half-way decent photos. They didn’t. Also on an ornithological front: I forgot to mention that I’d already heard my first Cuckoo of the year at the campsite, which is becoming an annual event.

B and I did go for a swim eventually. Wastwater is England’s deepest lake, and the water was very, very cold. Still it was fun, if short-lived. It was instructive to paddle across the mouth of the stream which you can see in the photo above – the water flowing in the stream was noticeably, considerably warmer.

Meanwhile, the girls had decided to give J a makeover. She demanded that I take her photo for the blog to ‘make her famous’. So…. 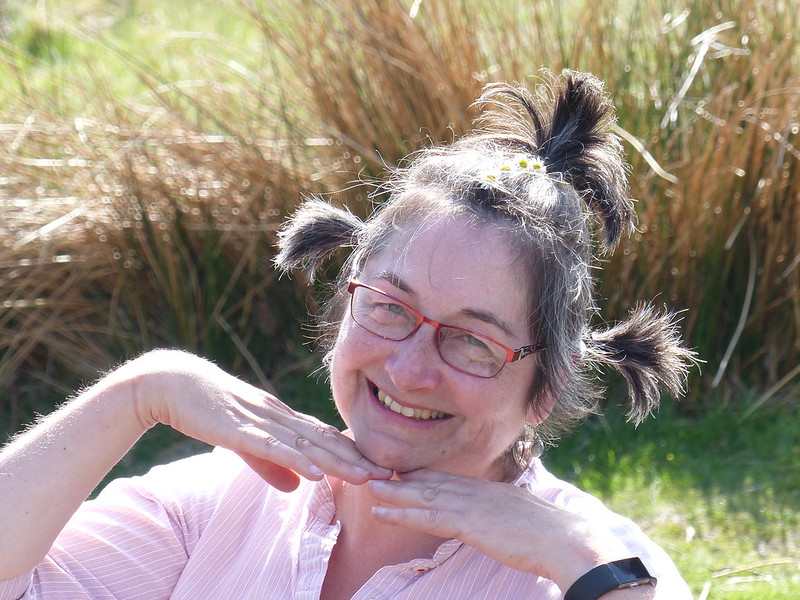 I’m not sure that J actually reads my blog, but all three followers and my Mum will now get to see her Pippi-Longstocking Got Married look. It’s sure to catch on.

My original plan for last Thursday had been to take the kids to Staveley, something I’ve had in mind for a while: it has plenty to offer in the way of things to do to keep both me and the kids happy. In the end, the weather forecast persuaded me that I might be better of heading west, hence the trip to Sea Wood etc. But when Sunday afternoon turned out fine I resurrected the idea. We began with cakes at the artisan bakery More?. I know from previous experience that the bread is delicious. I didn’t have a cake, but did use that as an excuse to try everybody else’s (ha ha) and can report that the muddies (chocolate brownies), pistachio tiffin and lemon meringue tart are all to be recommended. The lemon meringue was a good as my mum’s (well almost) which is high praise indeed.

Next on the agenda was a walk along the river Kent. Regular readers may both have noticed that my progress in exploring the length of the river has rather stalled of late – when time is available I’ve preferred to head for the hills – but hopefully I will have more opportunities to attack the problem piecemeal fashion. This was certainly a lovely walk.

This substantial pond is unnamed on the OS map, and isn’t included in John and Anne Nuttall’s guides to the tarns of Lakeland, perhaps it’s too low to count as a tarn? As you can see the boys were more appreciative of the outcrop of rock beside the water.

The path on the map isn’t along the river bank, but this is obviously a well-loved route and there were actually paths, one of which followed the riverbank. This meant numerous stops to throw stones. A and B are trying to master skimming, but S is happy just to shotput the largest boulders he can find and lift.

We passed a sewage treatment works and then into Beckmickle Ing woods. I came here almost two years ago, from downstream rather than upstream, and once again there is a host of daffodils, but unfortunately they aren’t golden yet. TBH is keen to revisit soon in a effort to catch them at their best.

Just below the woods we crossed the river on a pleasing ramshackle bridge and then turned to head back up the other bank.

S was tiring, but always had the energy to clamber onto any rocks we passed and to inform me that I am, apparently, a dirty rascal.

An afternoon proved woefully inadequate to sample all the delights of the Staveley area. We didn’t get a cup of tea at Wilf’s cafe. Nor did we join the rather lively sounding concert at the Hawkshead brewery. The Burne-Jones window in St. James church was passed over once again.

A walk up Reston Scar will have to wait for another time.

And the kids complained that their visit to Staveley’s top-notch playground wasn’t nearly long enough.

Oh well….we shall have to come again!