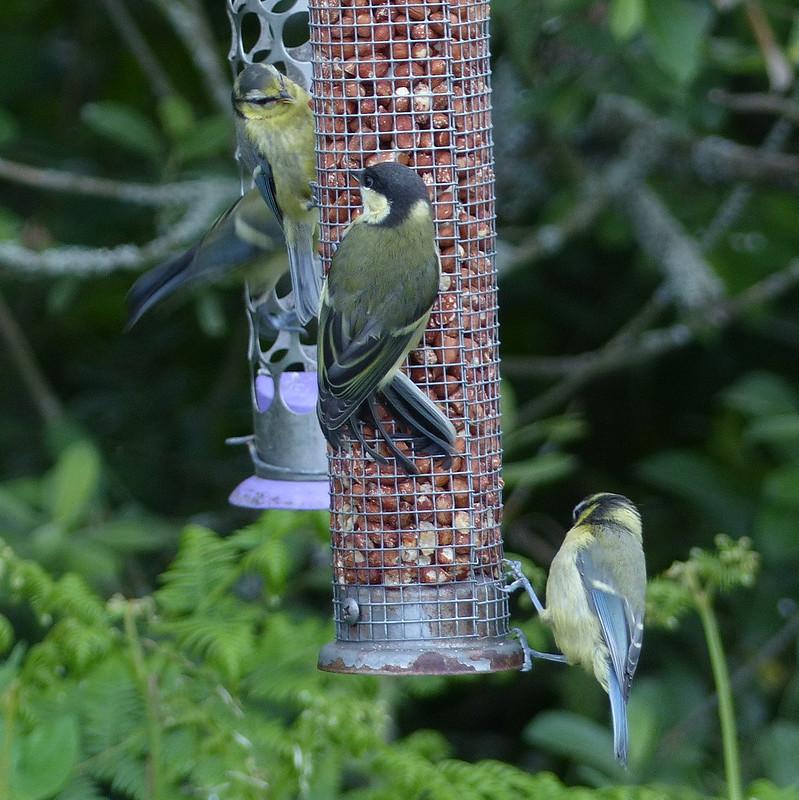 A juvenile Great Tit and a Blue Tit share a moment. 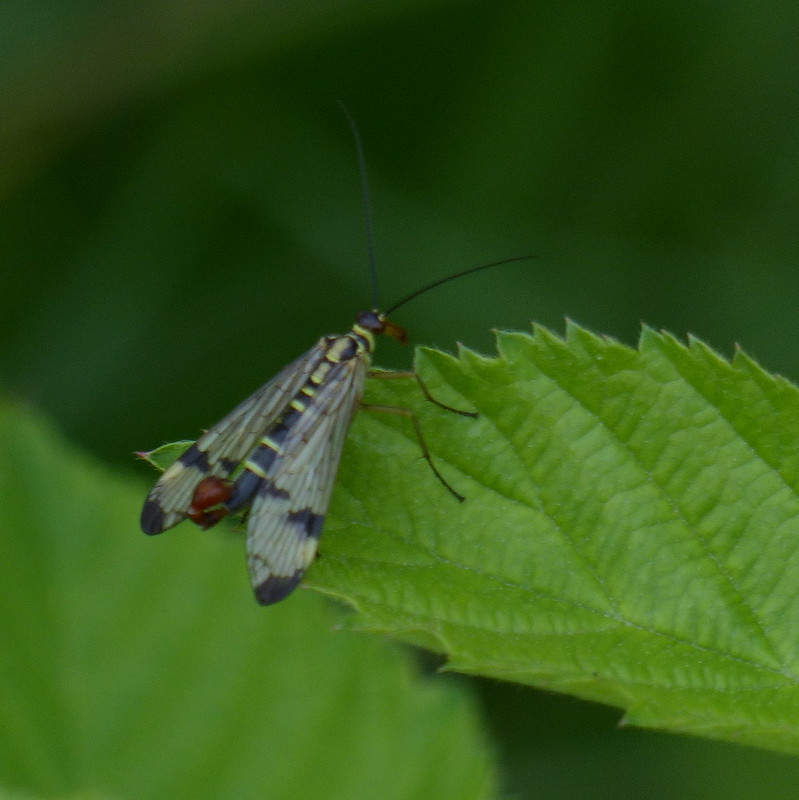 Male Scorpion Fly – rubbish picture, but you can see the appendage which earns its name. 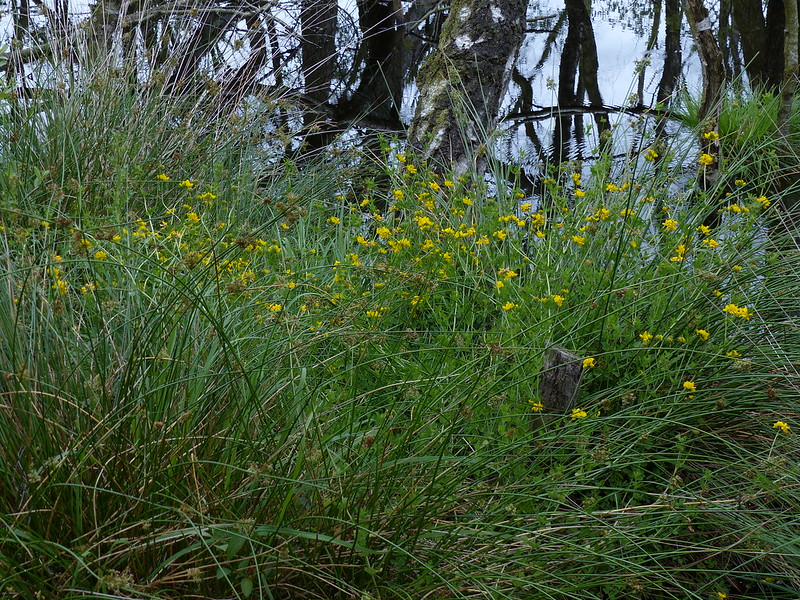 Lots of these at Foulshaw at the moment, under the trees at the edge of the reserve. 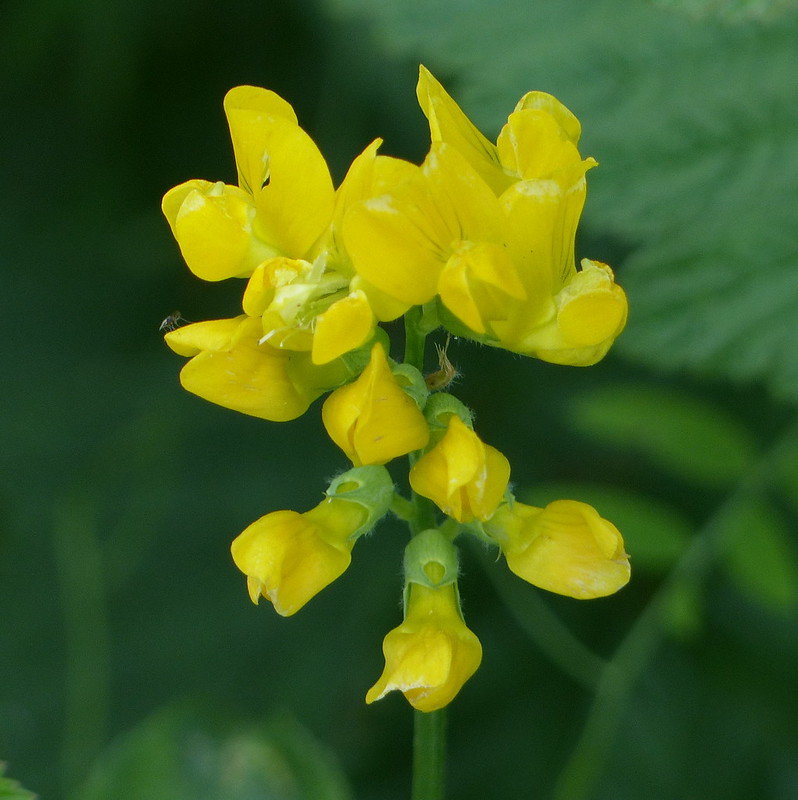 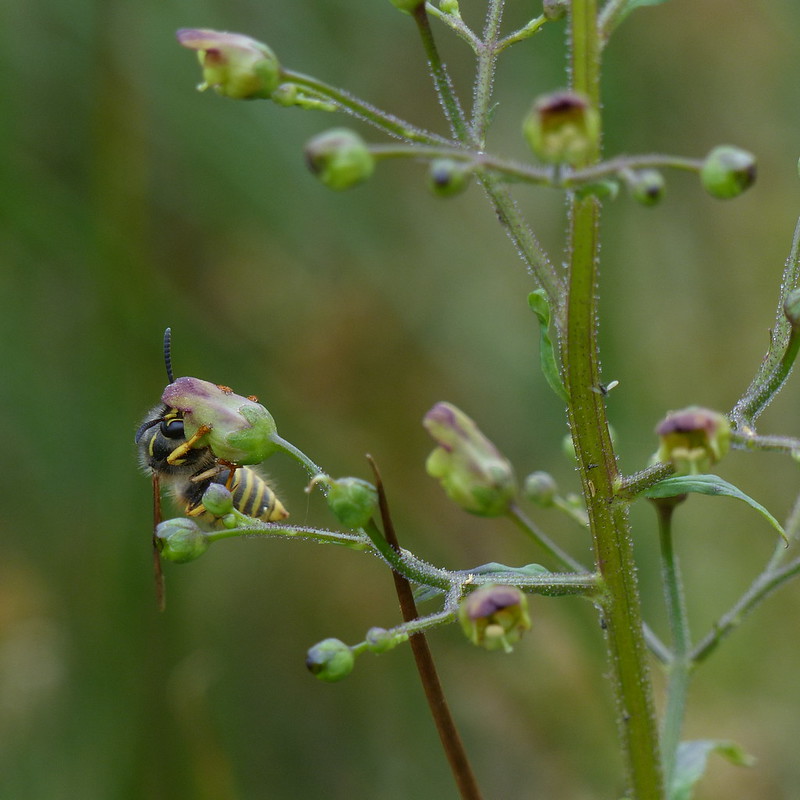 Reading John Wright has made me think about the ways in which insects and fungi are often adapted to exploit particular plants. I saw wasps feeding on Figwort a few times on this visit. A Figwort flower and the head of a wasp seem to be a perfect fit. 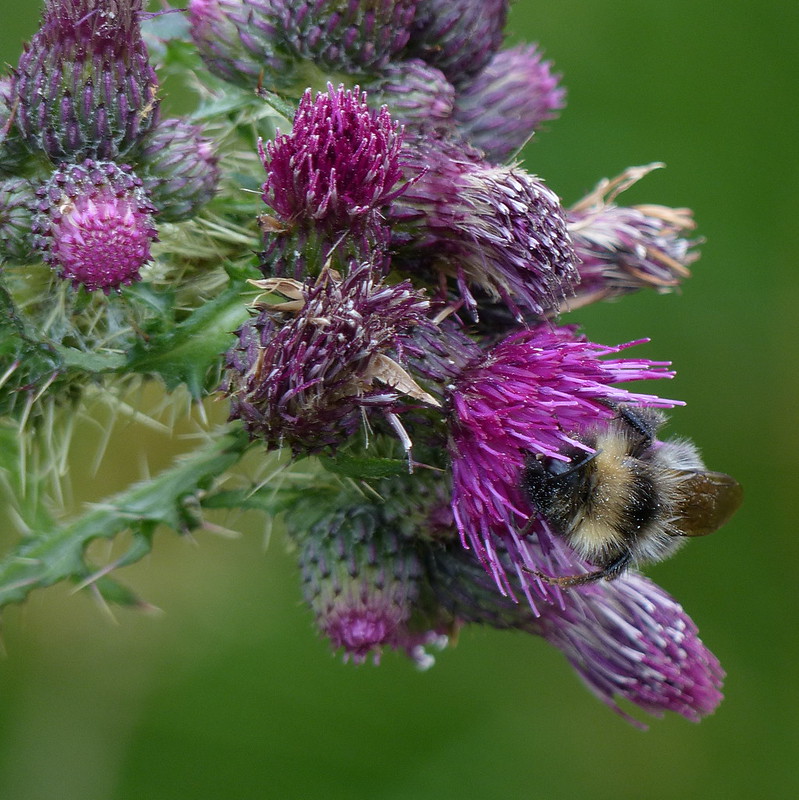 The dark wings here make me think that this could be a Cuckoo Bumblebee, on a thistle obviously, Marsh Thistle probably. 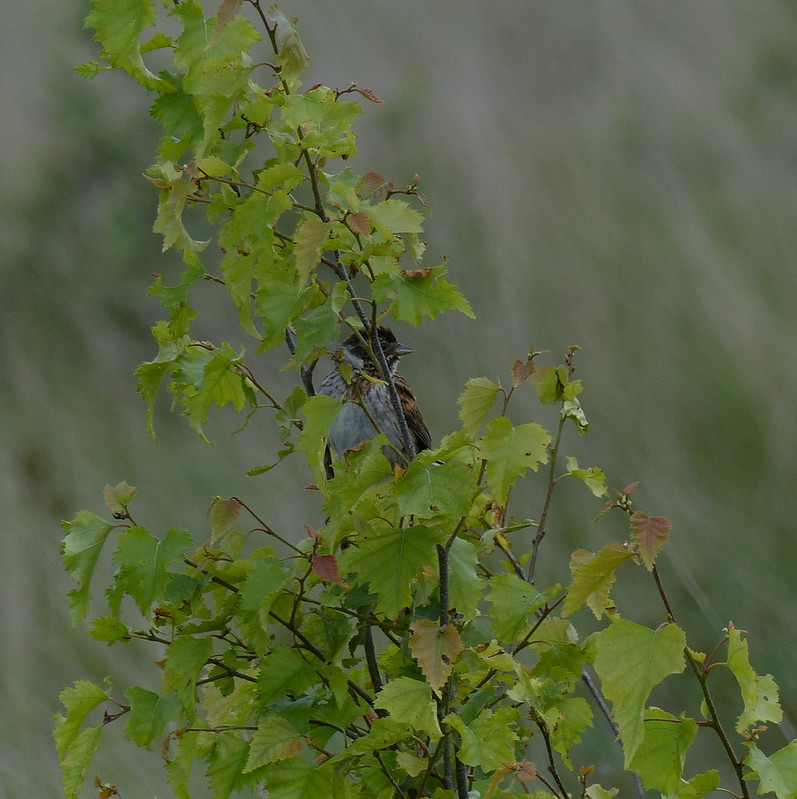 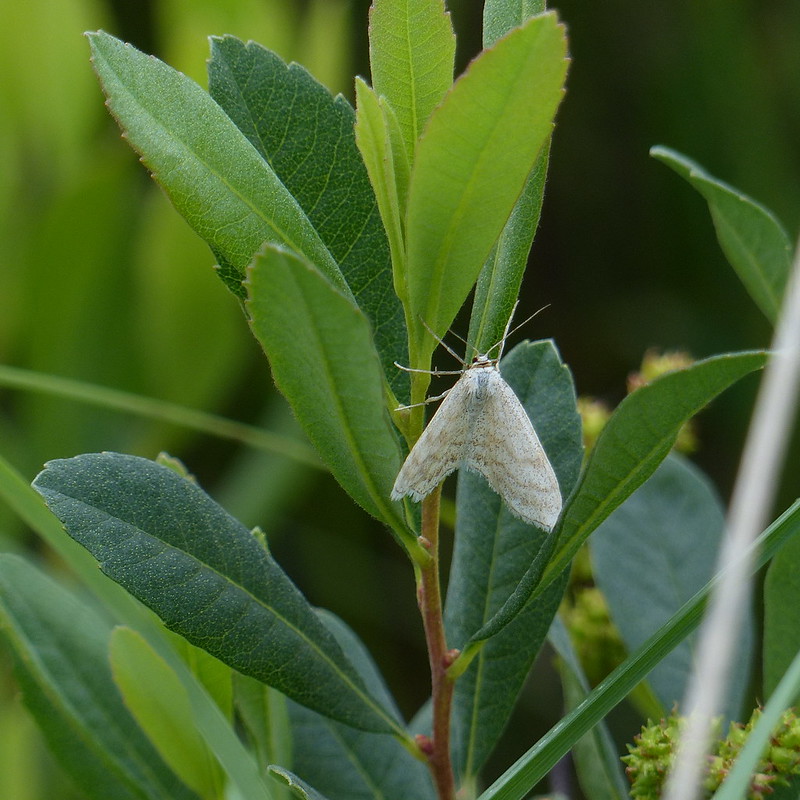 After the diverse, but elusive, moths and butterflies of my last visit, this time these small pale moths were to be seen all around the boardwalks in the more open, heathland areas. It’s a ‘wave’. But there are lots of those to choose from: Common Wave, White Wave, Small White Wave, Cream Wave, Small Cream Wave, Silky Wave, Grass Wave – and that’s just the ones which are pale with brownish stripes. Some of these species live in woodland, some have marginal black dots on their wings, or more prominent dark spots in the centre of their hind-wings, or on both wings, none seemed to fit the bill perfectly, but I’m going to tentatively plump for Common Wave, as it’s the best fit as far as I can tell. 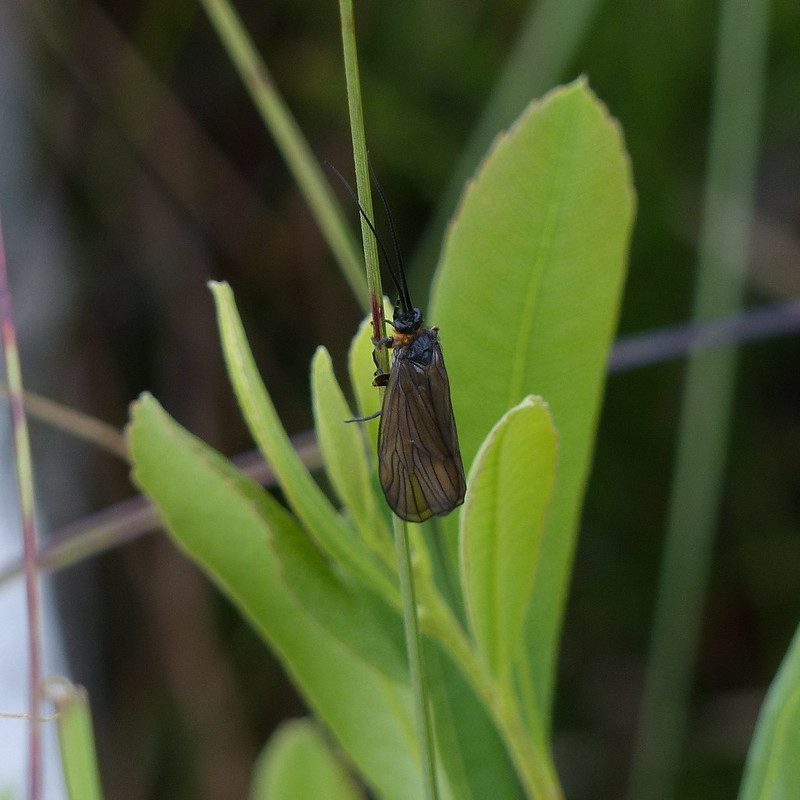 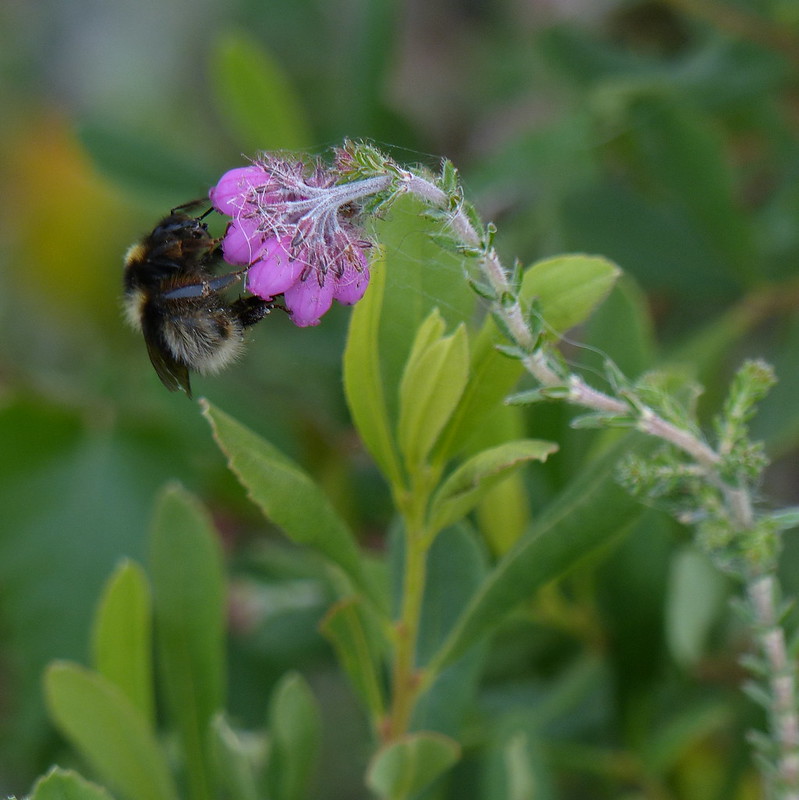 Another Cuckoo Bumblebee? On Cross-leaved Heath. 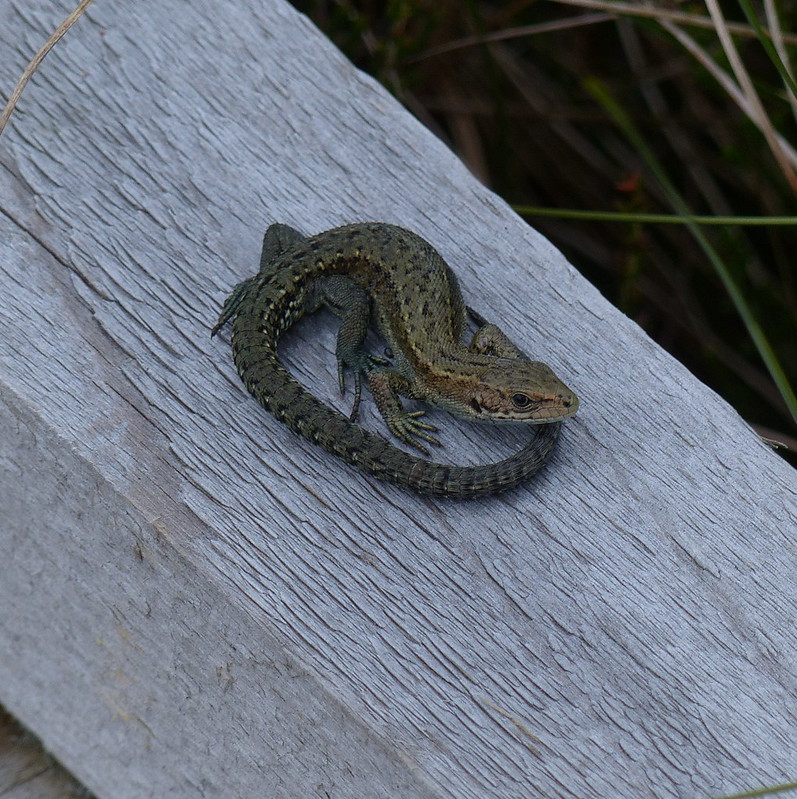 I spoke to somebody, who told me they had spoken to somebody else earlier, who had photographed six Adders that day at the reserve, one of them basking on a boardwalk. I didn’t see any snakes at all, but I did spot this Common Lizard. 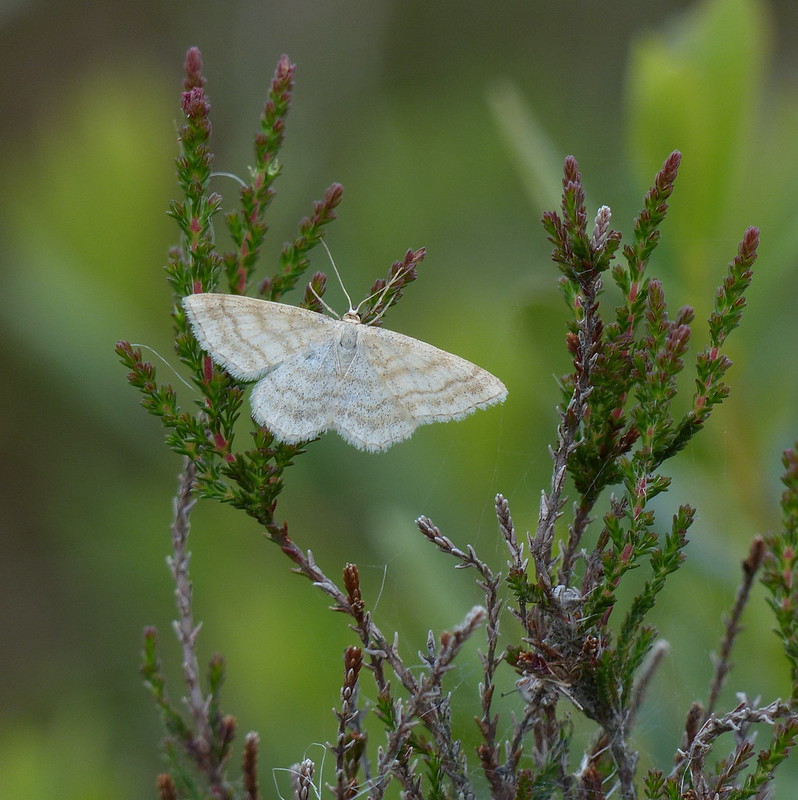 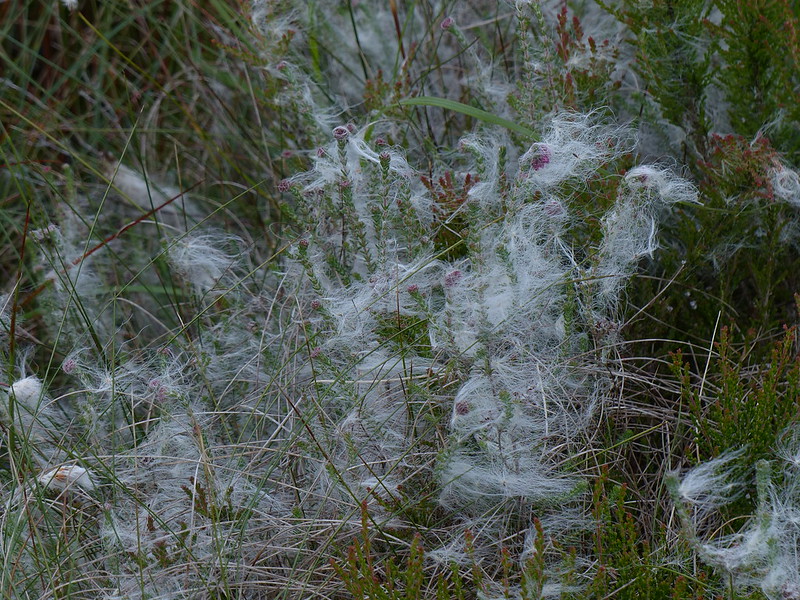 The ‘cotton’ from the Bog Cotton has completely coated some areas. 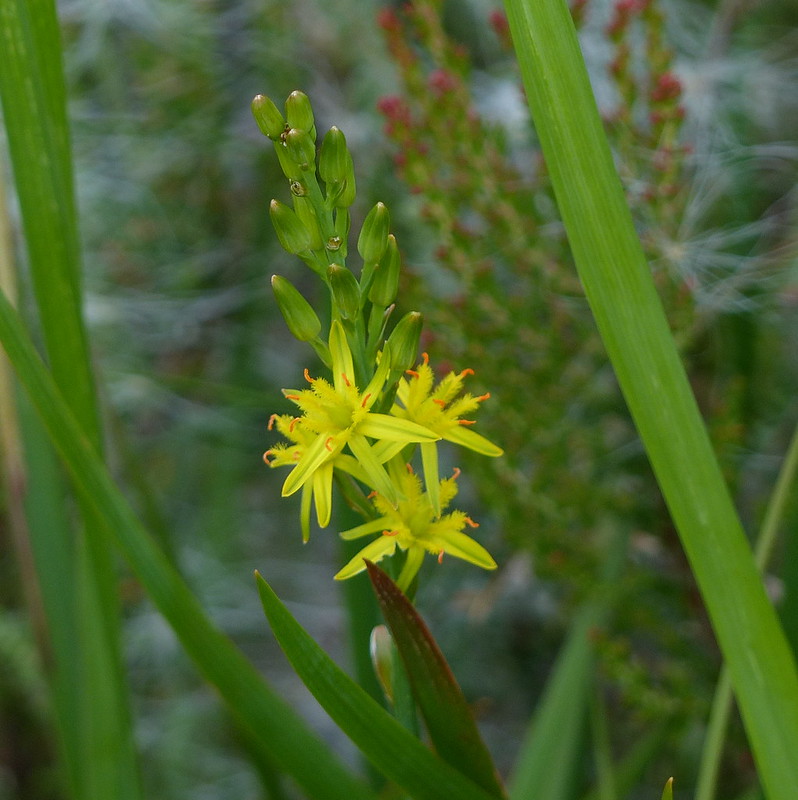 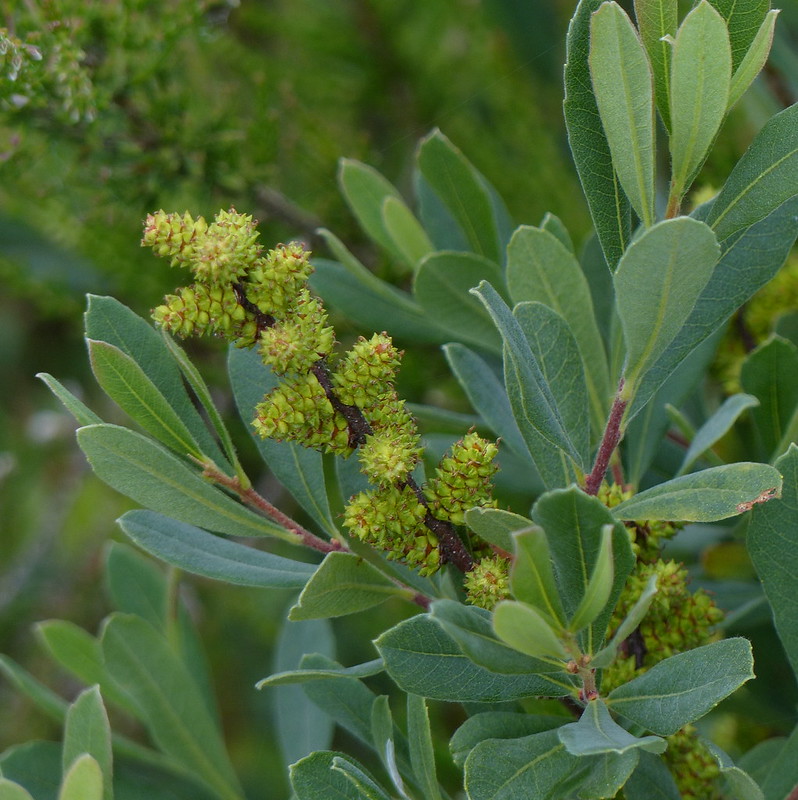 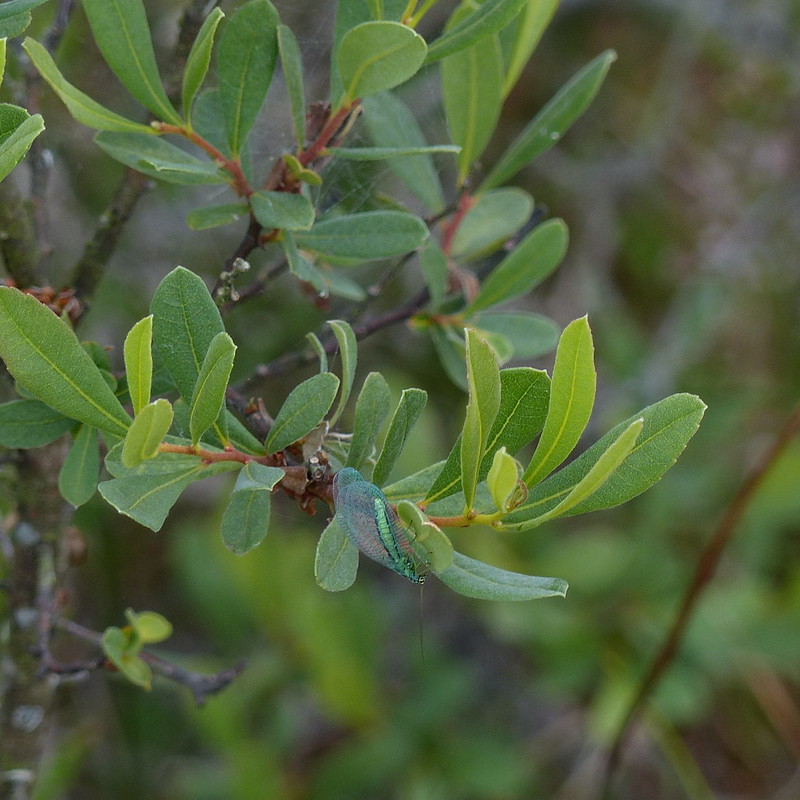 Green Lacewing. There are 18 British species and this is one of those, I’m fairly sure. 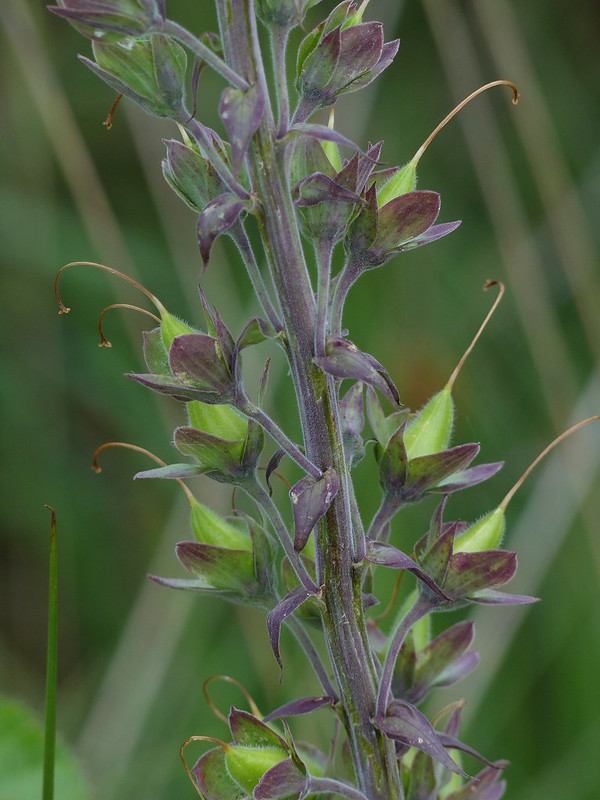 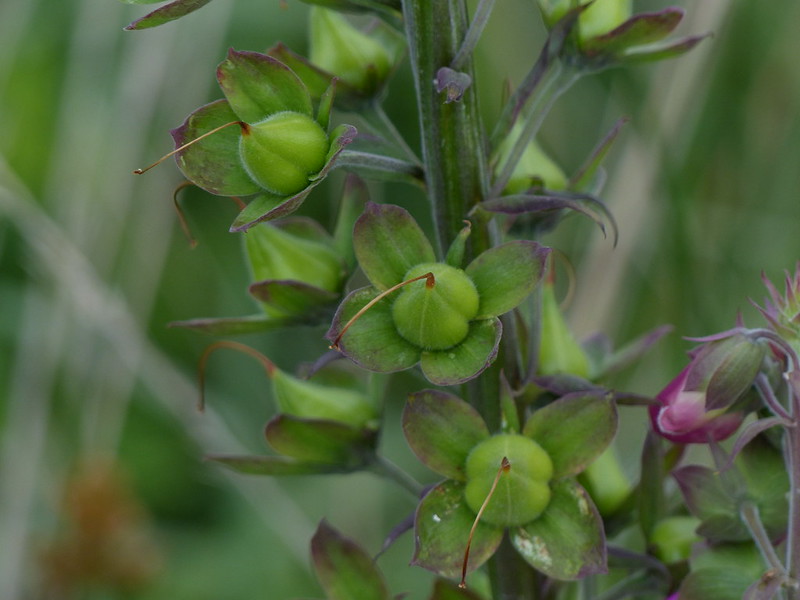 It’s been interesting to visit three weeks running and see how things have progressed. The Meadowsweet is flowering now. Here’s some with Tufted Vetch… 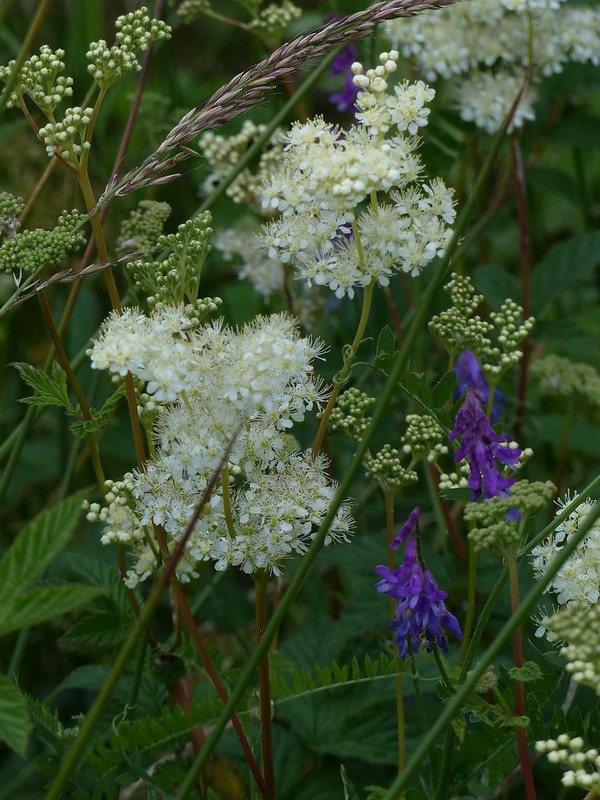 I’m sure that I’ve read somewhere that blue and white flowers in a garden together traditionally signify The Virgin Mary, but I can’t remember where I read that, so I may be wrong. It is, however, the kind of useless detail which I tend to remember, unlike, for instance, important things like people’s names. 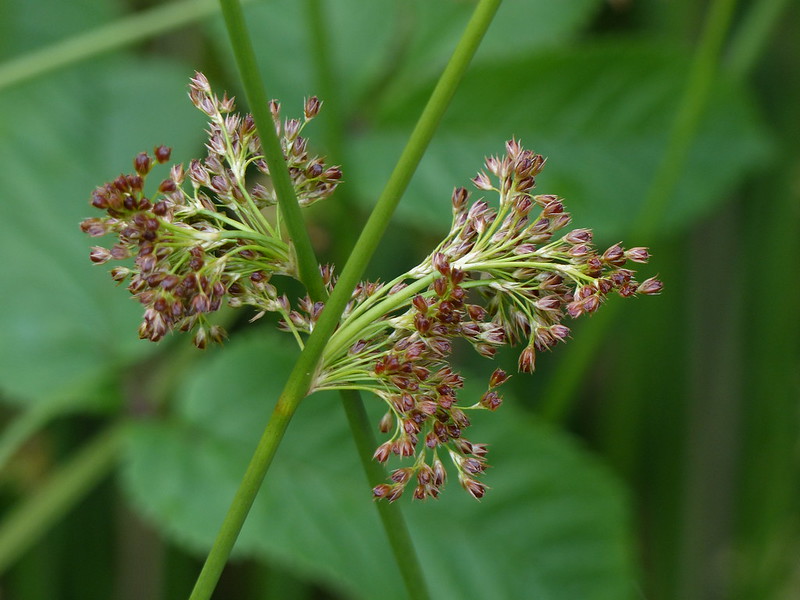 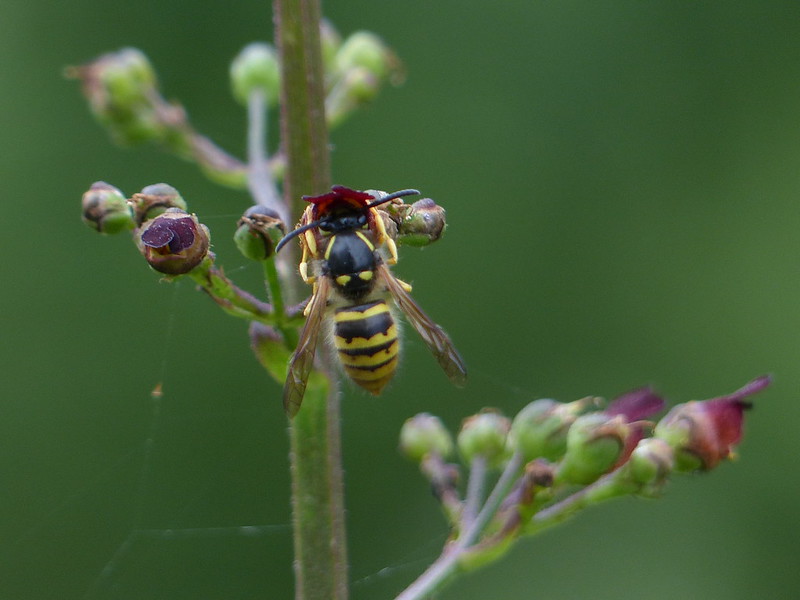 See: wasp, Figwort – made for each other. Britain has nine species of Social Wasp, but I’m going to tentatively identify this as a Tree Wasp – Dolichovespula sylvestris. 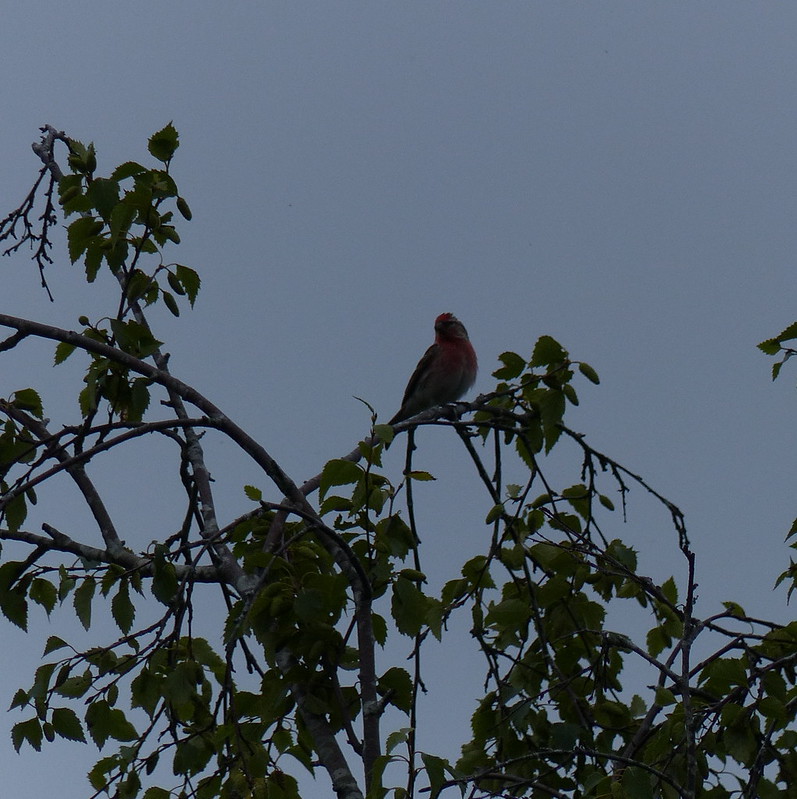 I’m quite chuffed with this photo, even though it’s clearly rubbish. I’ve been seeing these birds at Foulshaw and listening to their chatter, and thinking that they were Linnets, but not being sure. I’ve taken lots of photos, but only ever getting silhouettes, which looked right, but hardly proved conclusive. This one is only a slight improvement, but does show a bit of red and confirms that they are Linnets after all. 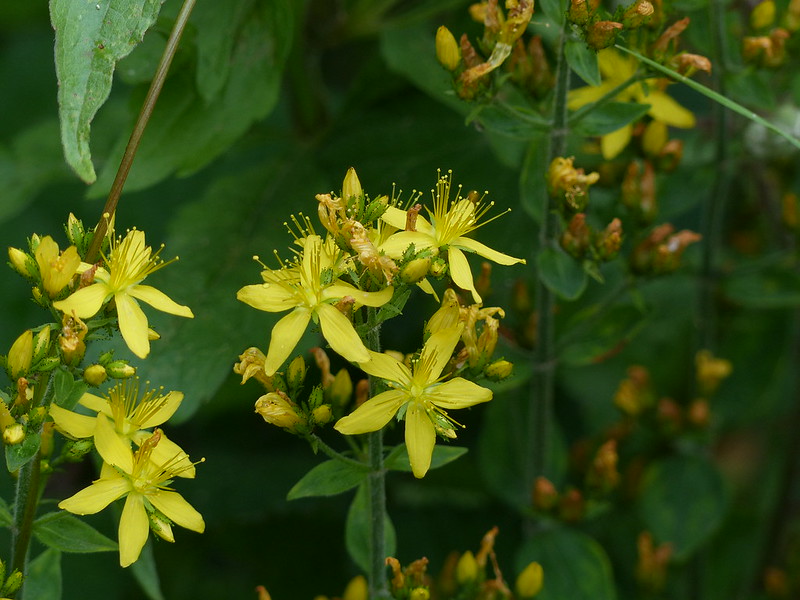 A Saint John’s-wort. There are several different Saint John’s-worts. If I’d taken clear photos of the leaves and the stem, then maybe, just maybe, I would know which this was. But I didn’t; so I don’t. 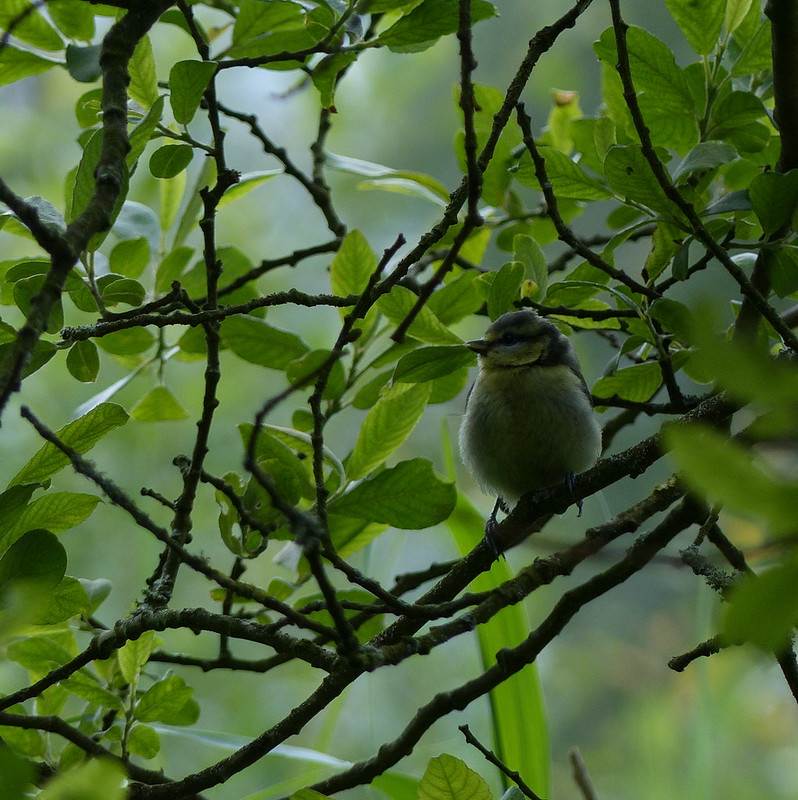 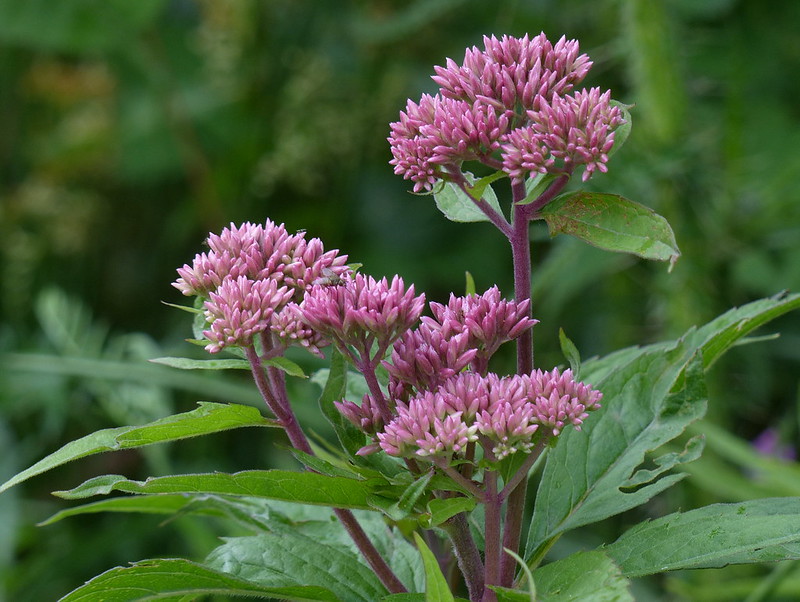 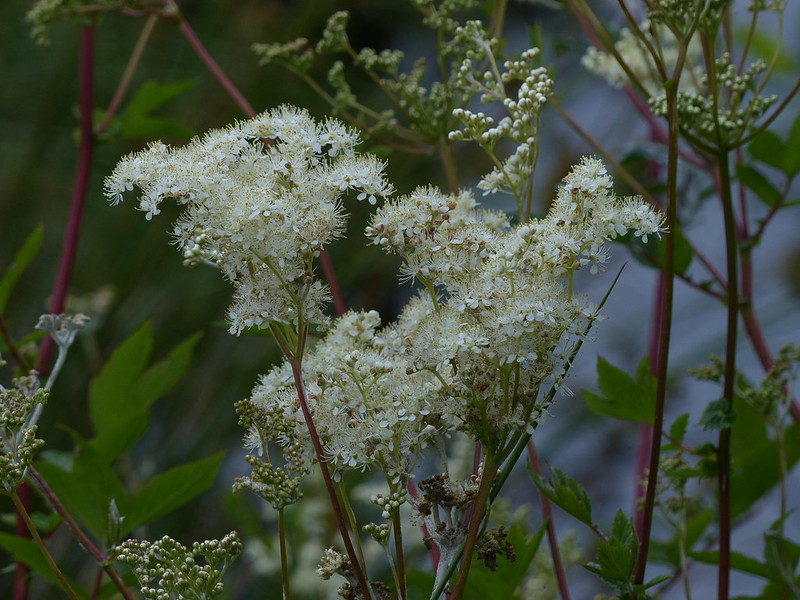 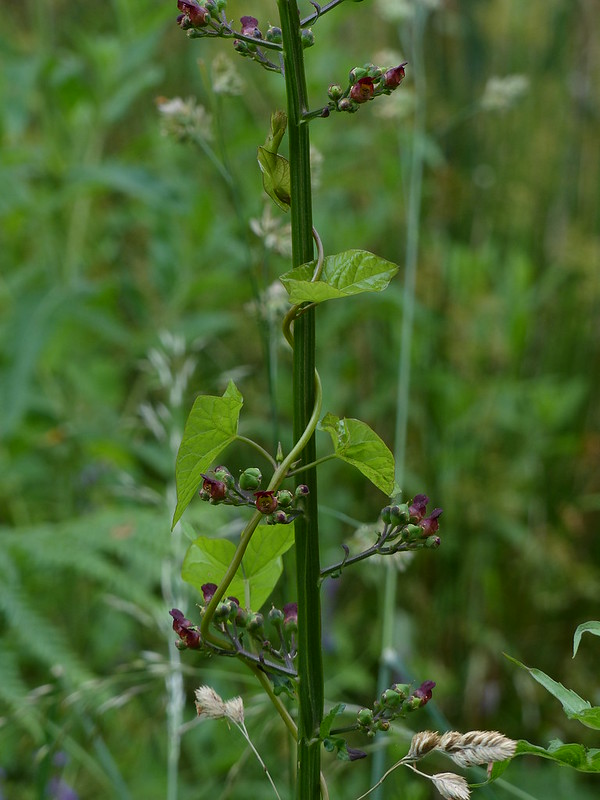 Figwort grows at Lambert’s Meadow and also in Middlebarrow Wood and probably in lots of other places locally, but it’s not a very inspiring plant where I’ve seen it. At Foulshaw, however, it really seems to thrive – it’s always tall, but here it has huge thick stems and masses of flowers and is generally more impressive and imposing than it is elsewhere that I’ve seen it.

Having been impressed, I decided to look Figwort up in ‘Hatfield’s Herbal’. Apparently Figwort, like Meadowsweet, had a widespread reputation as a painkiller. Mothers used it to quiet teething children. It was renowned as a treatment for piles, once known as ‘figs’ and hence the name. And it was also known as a treatment for Scrofula, now called Glandular Tuberculosis, but once called The King’s Evil, because the touch of a monarch was supposed to cure the disease. Figwort was apparently regarded as the next best thing.

Now this put me in mind of John Graunt and his ground-breaking 1663 book Natural and Political Observations Made upon the Bills of Mortality, which I like to use when I’m teaching Statistics. Graunt carried out an analysis of the causes of death recorded in London Parishes over several years.

I don’t particularly enjoy teaching Statistics, but lists like the one above never fail to get students engaged. Both the figures and the causes of death are eye-opening. Simply being a child (a Chrisome is a child less than one month old) is the most common cause of death. ‘Kild by feveral accidents’, “Bit with a mad dogge’ and ‘Suddenly’ usually illicit comment, as does the fact that 454 people have died by ‘Teeth’, 28 by “Wormes’, 114 by ‘Surfet’ (which, yes, is eating too much) and 6 by ‘Murtherd’. Another similar page has ‘Wolfe’ as a cause of death. What are we to make of ‘Rising of the Lights’ or ‘Plannet’ or indeed ‘King’s Evil’? You can find suggestions on this fascinating website. Timpany, disappointingly, is not death by Kettle Drum.

More sunshine! I was out early with S (who woke up just after 5). He was in the pushchair, eventually asleep, so we stuck to the lanes and went through the village and then round Bottom’s Lane. I was busy thinking, preoccupied with a maths problem, when this Meadow Brown caught my attention…

Walking is a great way to see the flora and fauna on your local patch, but stopping is often even better. Now that I had my camera in hand, and had stopped, at least for while, trying to calculate the difference between the cubes of thirteen and eleven, I realised that the the trees and shrubs alongside the road were bouncing with families of young birds, particularly Blue Tits and Long-Tailed Tits.

One of the latter led me on a merry dance as I tried to catch it on camera. It hopped and fluttered from branch to branch. I took several photos of twigs which it had only just vacated. In the end I did get some pictures…

…but only incognito shots. It would never quite show its face…

Meanwhile, on the verge the brambles are flowering. Not spectacular to look at, but obviously very attractive to nectar seekers. The plants on the verge were also heavily populated by…

When they are buzzing around my face, keeping me awake on a hot summer evening (not that we’ve had any of those recently), or in my kitchen, frankly they drive me mad. But I have to admit that the colours and the wings are very impressive.

On the opposite verge there were tall spikes of Limestone Woundwort:

Your ordinary, bog-standard Woundwort is very common in this area, its flowers are smaller and darker and it’s not half as showy as this close relative.

Although I had an early start I can’t compete with these guys:

Having cut the hay yesterday, today the fields and roads in the area were busy with tractors turning and then collecting it before more forecast wet weather arrives off the Atlantic tomorrow. When I started writing this post they were still out there working with floodlights.

For me the rest of the day held a puppet show and a charity garden party with the family and my Mum and Dad, so a pretty lazy day:

But Farmers and Bees are always busy:

Apparently, Bees can count to 3, but perhaps that’s a story for another time.

After the snail shells I photographed on Tuesday night started me thinking about spirals and the geometry of nature, I noticed, on the shelves of Lancaster Library, a book called ‘Patterns of the Earth’.

It shows how the same patterns emerge in widely disparate locales and hugely different terrains.

Because the photos are mainly aerial, the patterns seen are on a geological scale.

To me a more interesting book would seek out those same patterns from microscopic  to galactic scales.

Just along the shelf I spotted ‘What Shape is a Snowflake?’ by Ian Stewart.

This explains the mathematics behind how the same basic patterns and shapes recur frequently in nature.

Then Ron from Walking Fort Bragg left a link in a comment to photographs on Astronomy Photo of the Day of a typhoon and a nebula, both of which are logarithmic spirals.

These equiangular spirals crop up in all sorts of places. They can be generated in a most elegant way using the Fibonacci sequence.

So with all this running around my head, imagine how thrilled I was today when Amy picked an Oxeye daisy and presented it to me:

And I discovered that it too had logarithmic spirals to display.