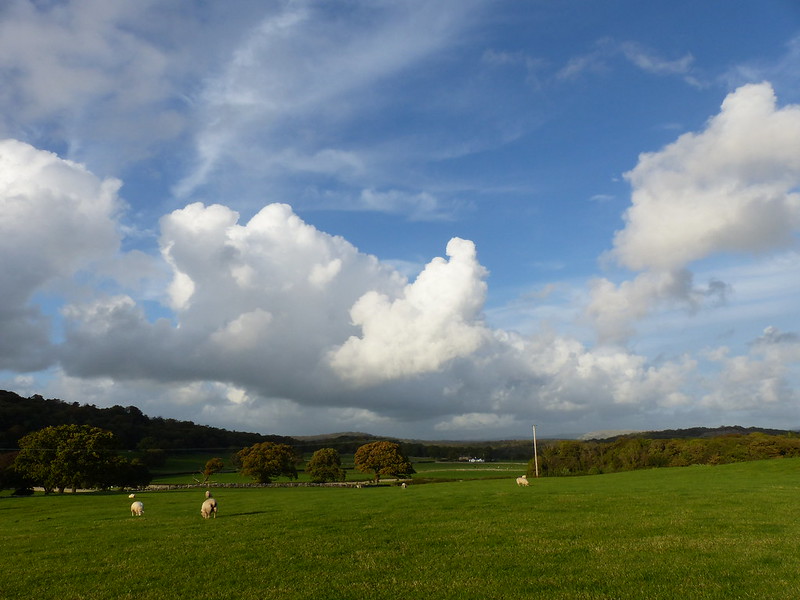 Bright skies and big clouds tempted my out into bracing winds on a Friday night after work. 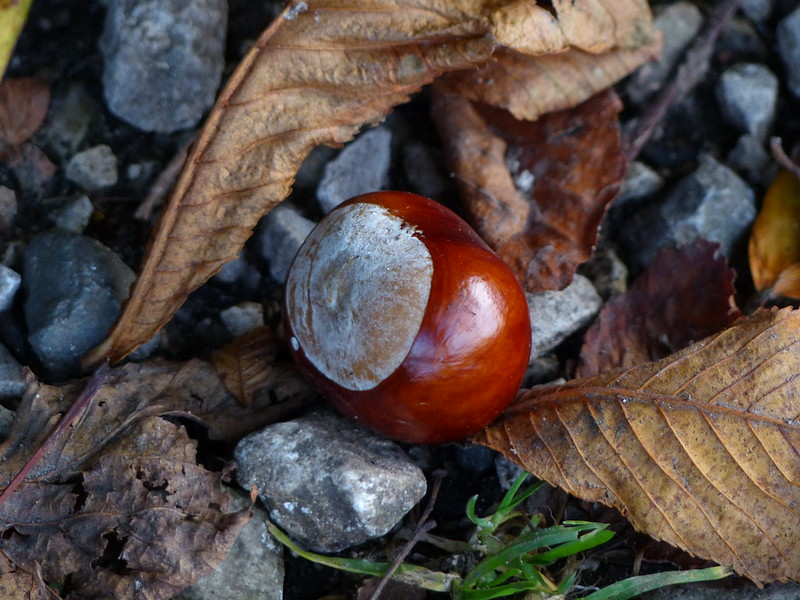 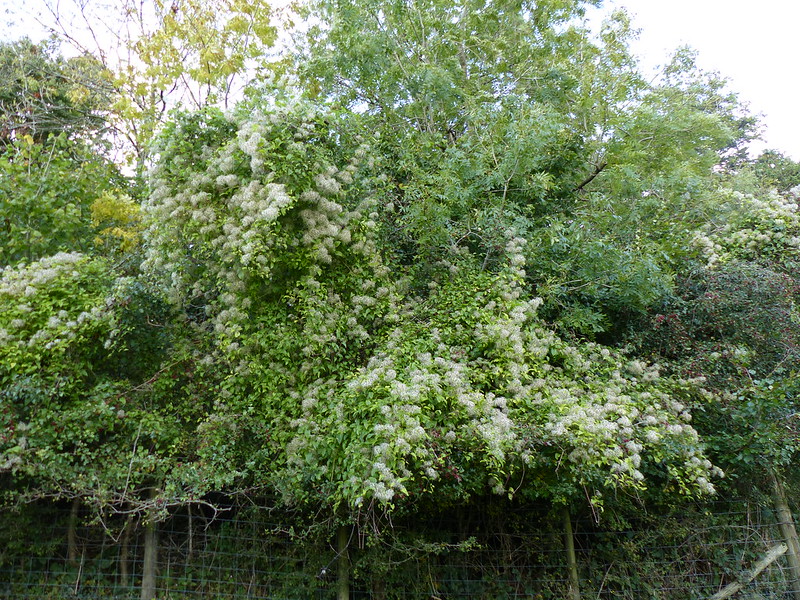 The path down through Fleagarth Wood to the end of Quaker’s Stang was extremely muddy even then, heaven knows what it will be like now, given all of the rain we have endured since. When I reached the saltmarsh, I was exposed to the full force of the wind for the first time, and was surprised by how brisk it was.

The tide was coming up Quicksand Pool… 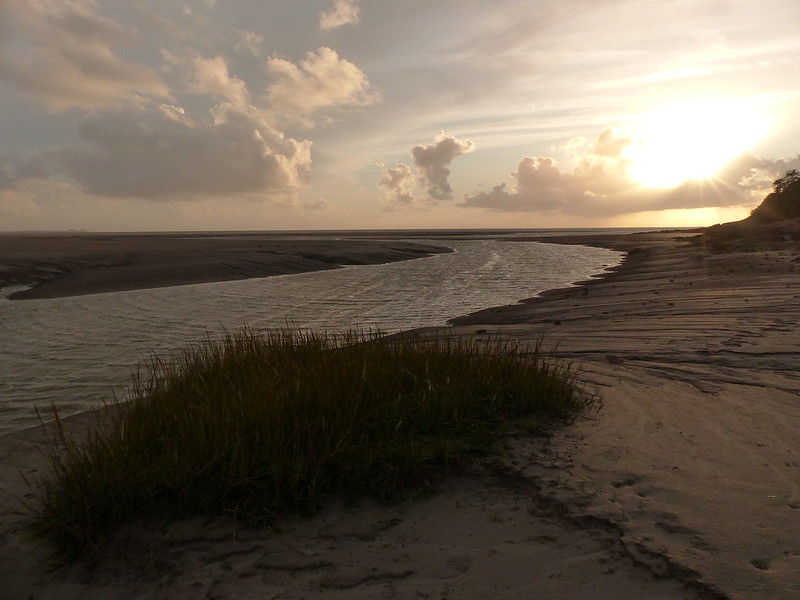 But the muddy banks were unusually firm, so I continued along them, rather than seeking the road nearby, because that way I kept my view of the retreating sun. 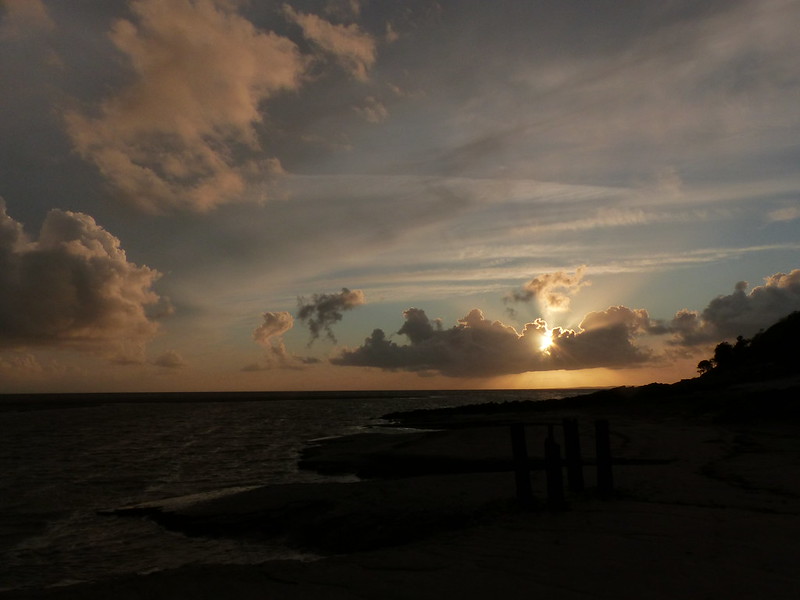 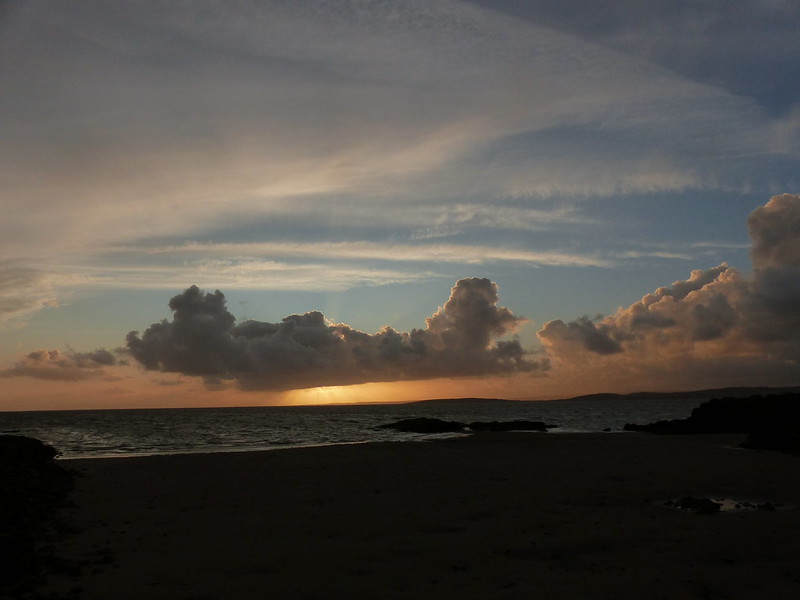 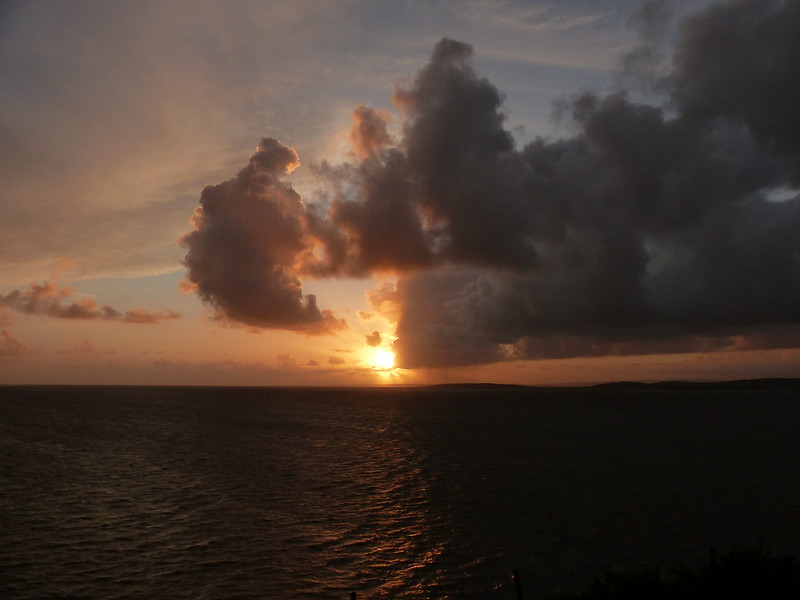 “Find your hope, then, on the ground under your feet.”

Wendell Berry  from A Poem on Hope. 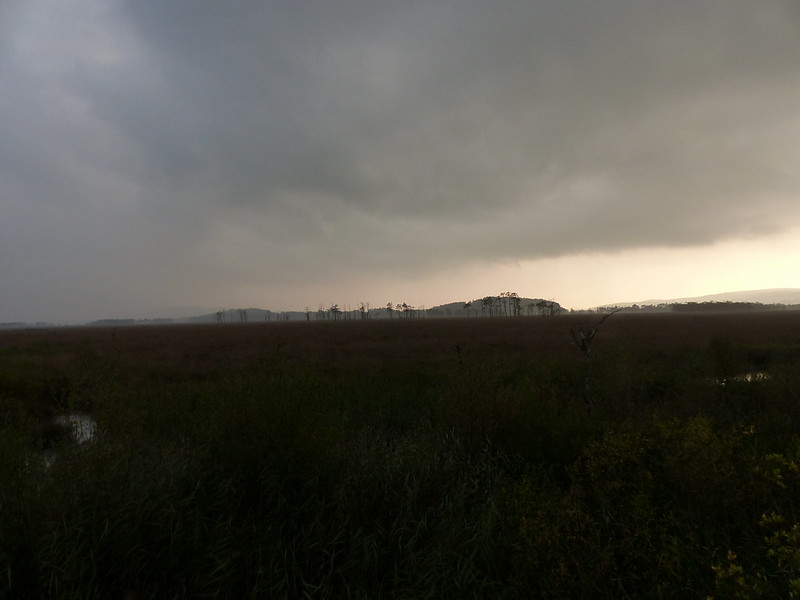 A third unexpected bonus in as many days – this visit to Foulshaw Moss came hard on the heels of the tiny lizards by Hawes Water and the heron at Bank Well, even though the respective blog posts have been more temporally spaced. The day had started wet, but then brightened enough, whilst I was at work, to kindle some optimism about the prospects for an evening walk. By the time I dropped off our budding ballerina for her classes in Milnthorpe, however, it was already raining again. Clutching at straws, I drove to Foulshaw anyway. In the wind and the rain, Foulshaw was a bit bleak, to say the least.

But then, and only for a moment, the sun dropped low enough in the western sky to suffuse the cloudscape with a hint of colour… 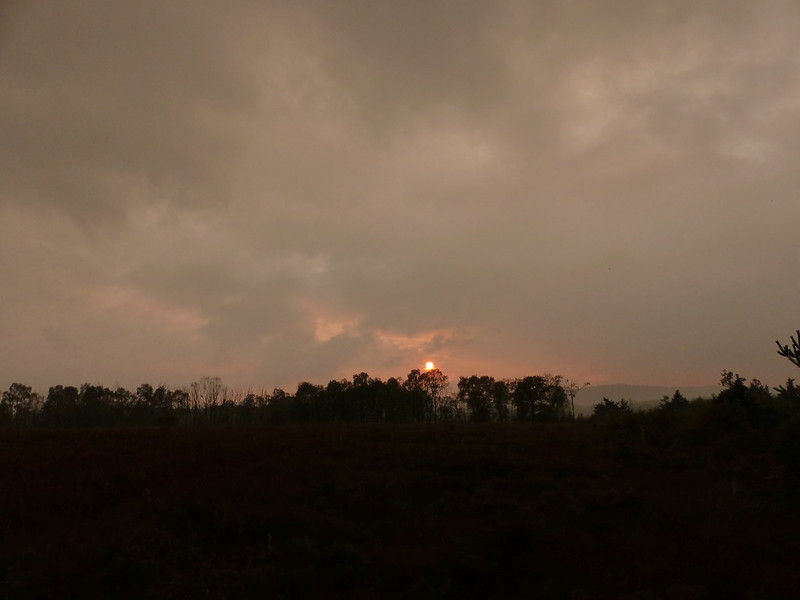 And I was pleased that I had made the effort. 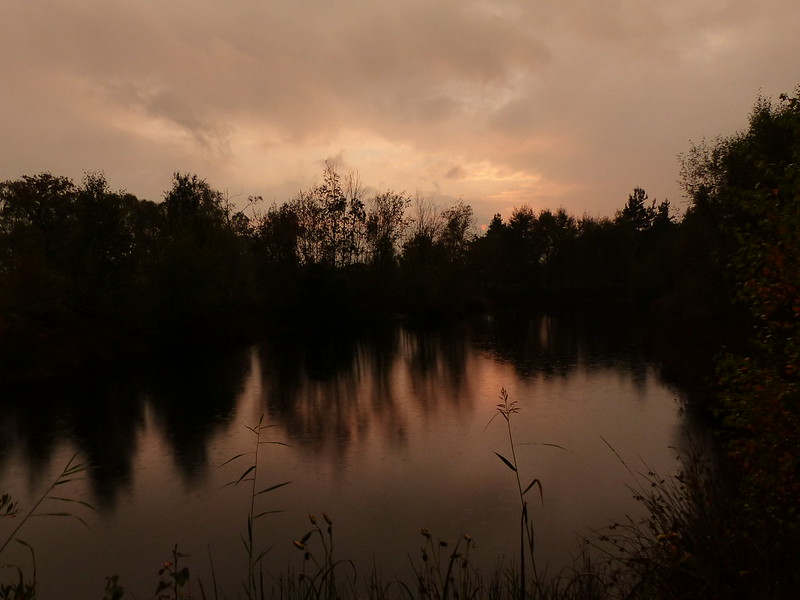 By the car park at Foulshaw, as is the case at many nature reserves, there is a chalk board for recording sightings, to which somebody had added: ’93 Common Lizards’, which is exactly the kind of precise one-upmanship that these boards seem to invite. The one at Leighton Moss often makes me chuckle, when the numbers of common birds like Starlings, or some of the overwintering ducks, are numbered in huge round numbers into the tens of thousands, as if anyone can count those huge flocks even remotely accurately. 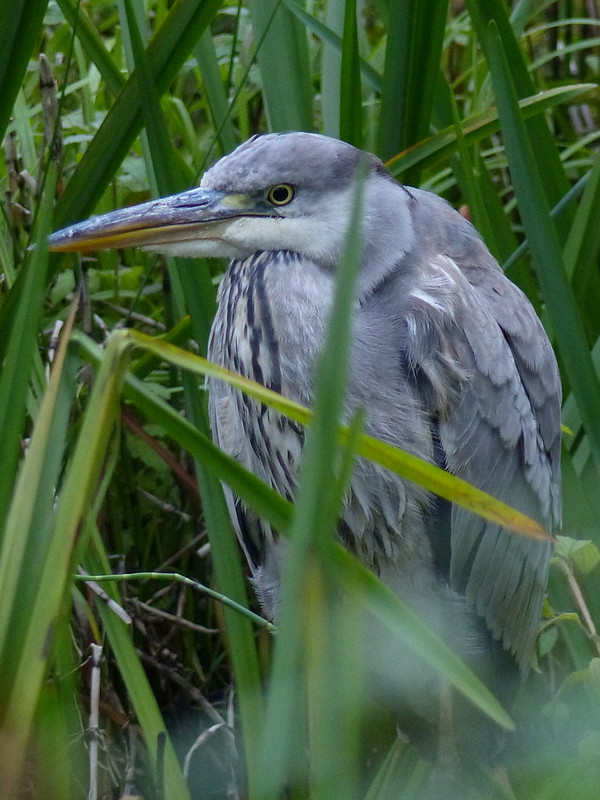 Another surprise. A Sunday afternoon stroll through Clark’s and Sharp’s Lots, down to Myer’s Allotment for the view of the Moss, and then back along the Row and across the fields. It was dull, but mild, and I’d hoped I might see some late season dragonflies, which I did, but only one, and that quickly flew by and out of sight.

As I passed Bank Well, something caught the corner of my eye. Double-taking, I was wondering why there was a pale grey boulder in the midst of the pond, when it had surely never been there before? The tall reeds around the pond made further investigation difficult, but once I’d realised that I was looking a Heron, I was surprised to see that it didn’t move, Herons usually being very shy birds, easily spooked. This one sat stock still whilst I moved around the pond looking for the best vantage point, taking many photos. Maybe this unusual behaviour can be put down to the fact that this is a juvenile; an adult bird would have a white crown and several distinctive black patches…. 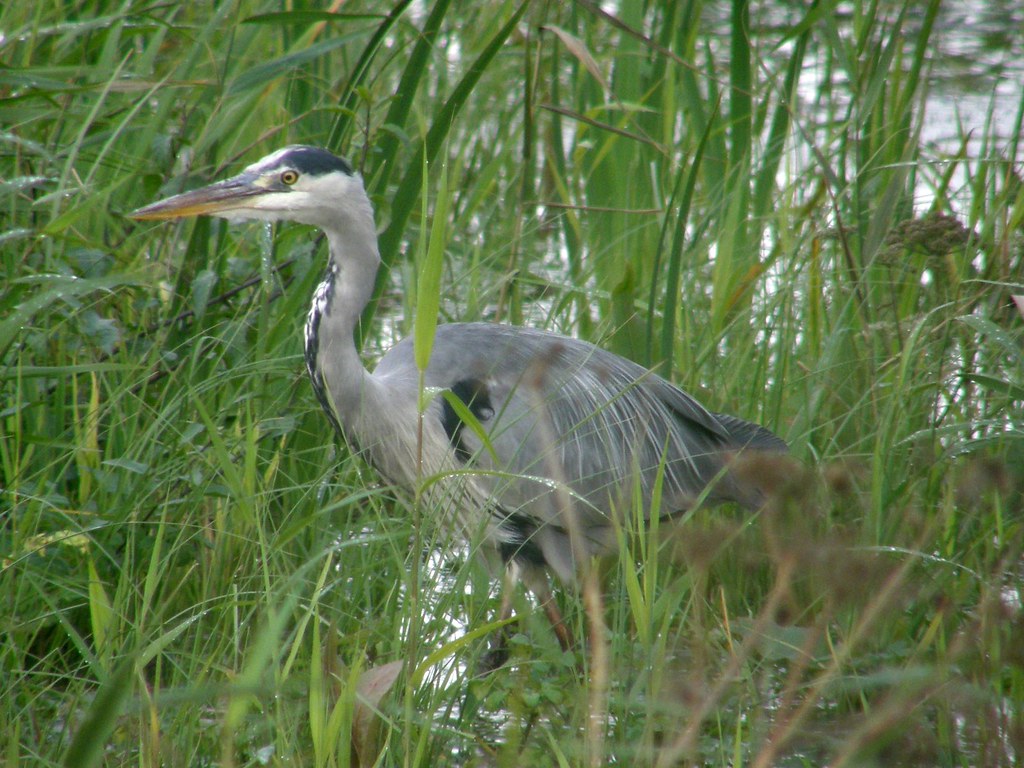 Here’s one I took earlier at Leighton Moss in 2011. 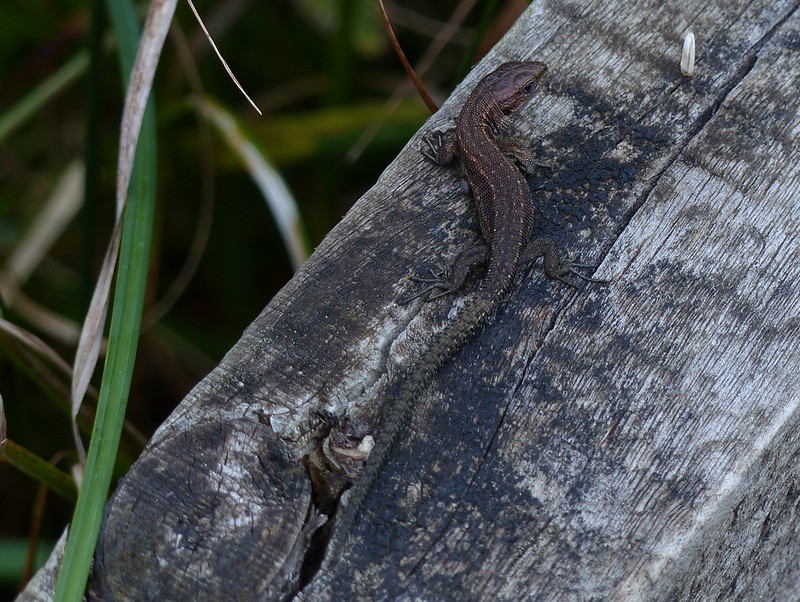 “The universe is full of magical things patiently waiting for our wits to grow sharper.”

I think it’s fair to say that this year I have seen more Common Lizards than I did in the previous fifty put together. To what should I attribute this phenomena? The fact that I’ve been making an effort to get out at every opportunity will go some way to explain it, but is far from being sufficient on it’s own. It’s hard to think what other factors might contribute. A local abundance of lizards? Good fortune? It would be tempting to think that my wits really are growing sharper, but sadly, I’m sure that the opposite is true. It has been facetiously suggested that a form of animal magnetism is in operation and that wildlife is drawn to me, which seems highly unlikely, although earlier during the same walk a Hawthorn Shieldbug did alight on my hand… 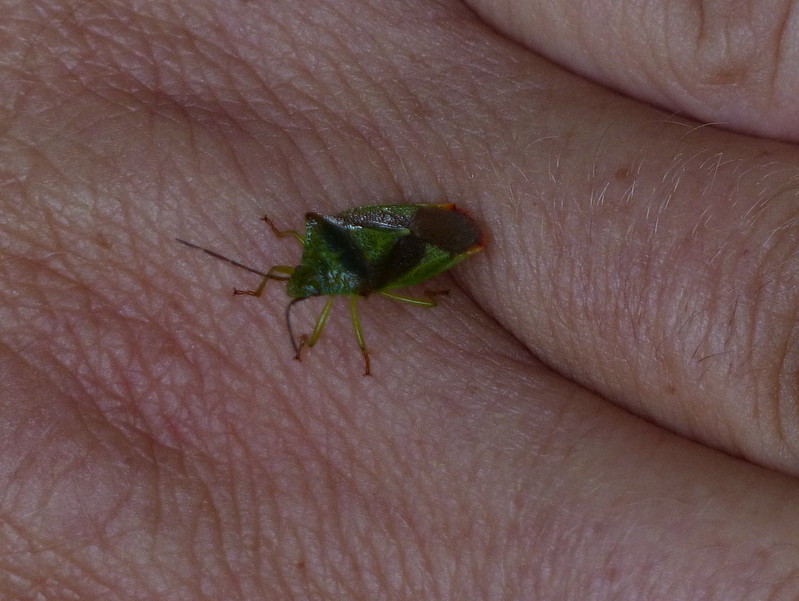 TBH and I were out for a Saturday afternoon ramble through Eaves Wood and then around Hawes Water. The lizards were in the same spot where we usually see them, on the edges of the boardwalk near the lake. We saw about half a dozen. They were all very small, tiny in fact, compared to those we have seen before. Presumably they were all from this year’s brood, born back in July. I suppose that they will be hibernating fairly soon, and it’s possible that these will be my last lizard sightings for this year, but hopefully there will be many more again next year, and other magical things to keep me occupied in the mean time.