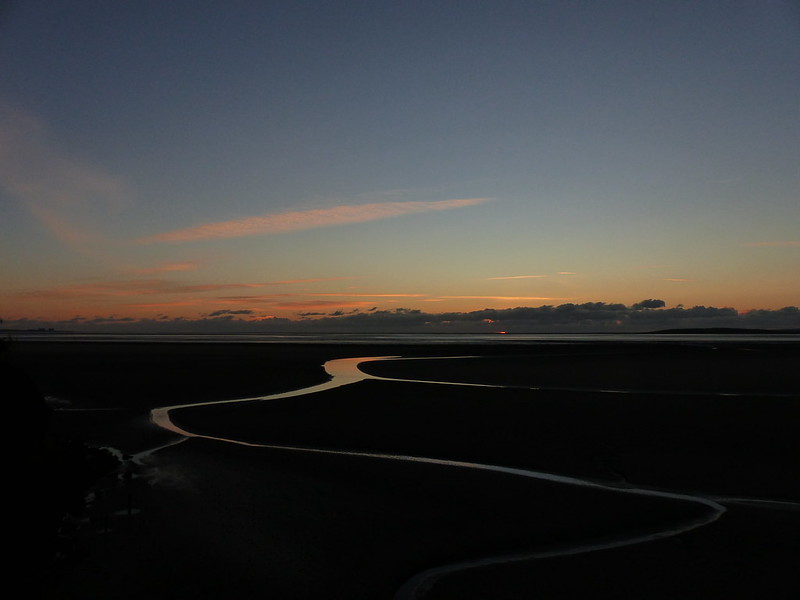 I’ve been wracking my brain, trying to think what I did with the rest of the weekend after my walk by the Lune. It took a a while, but it’s come back to me. I had things to do in the garden. My Dad had pointed out that the woodwork around our garage roof is need of a coat of…..varnish? Woodstain? Treatment? Anyway, whatever the stuff is that woodwork generally gets painted with. With a recommendation from a knowledgable friend I’d been to buy the requisite ‘stuff’, between dropping B off for his match and my walk by the river. When we got back, I set about preparing the ground; pressure washing and then sugar-soaping all of the woodwork. Then I read the instructions on the tin and discovered that the ‘stuff’ shouldn’t be applied when the temperature is below eight degrees. It was five. Bother. Is almost what I said at the time.

Not to worry. There were leaves to be swept up and composted and the Virginia Creeper which is supposed to climb attractively up the garage wall, had overstepped the mark and was now enveloping the entire roof, like some many tentacled Kraken, and threatening to lever off some of the roof-tiles. Before I could get in to hack that back, I had to lop another belligerent shrub, an overgrown Viburnum which was preventing me from reaching parts of the creeper.

That, and other odds and ends, kept me occupied for the Saturday afternoon, and for most of the Sunday, and, in honesty, whilst most of the cuttings have gone in the green bins, or been through the shredder and then added to the compost, the larger branches from the shrub are sitting in an unruly pile on the patio waiting for me to do something with them.

Anyway, the point is, when I finally called time on my ‘uncessant labours’, I took a wander down to the Cove, arriving just as the sun disappeared.

Meanwhile the mind, from pleasure less,
Withdraws into its happiness;
The mind, that ocean where each kind
Does straight its own resemblance find,
Yet it creates, transcending these,
Far other worlds, and other seas;
Annihilating all that’s made
To a green thought in a green shade.
from The Garden by Andrew Marvell
I know that I’ve quoted bits of this poem here before. The whole thing is here.
Maybe, the busy day which had preceded it made sitting on the bench watching the colours change in the sky and reflected in the water and the mud all the sweeter?
Far Other Worlds… 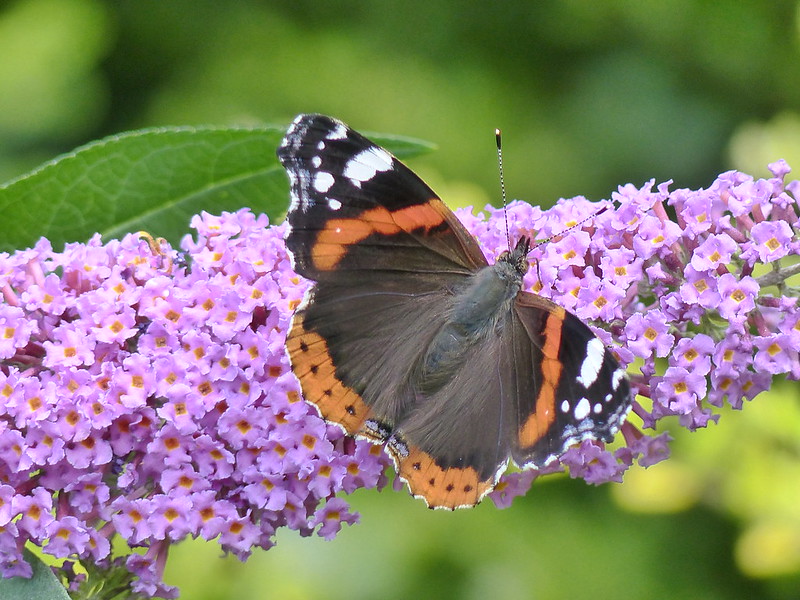 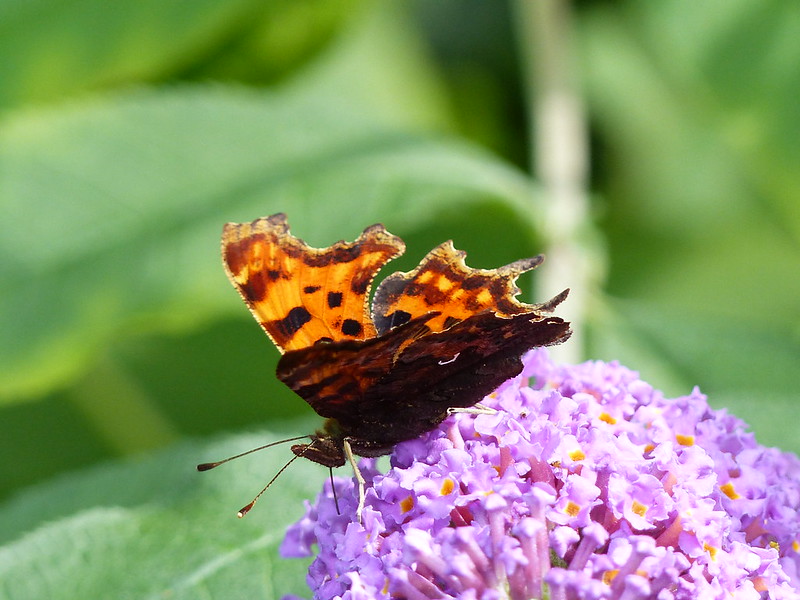 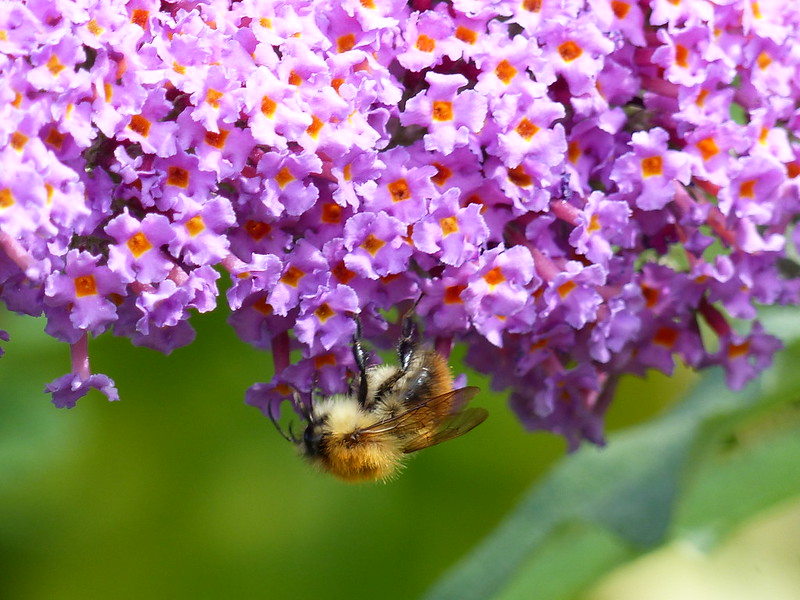 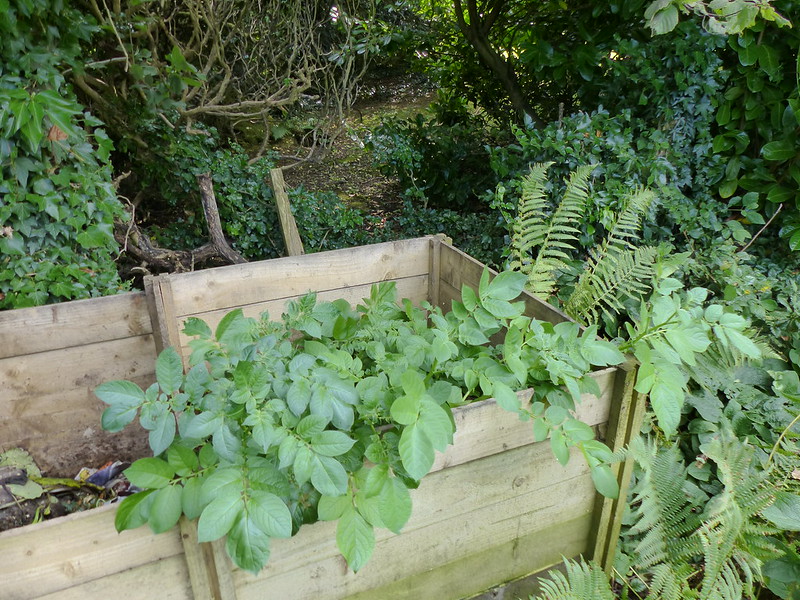 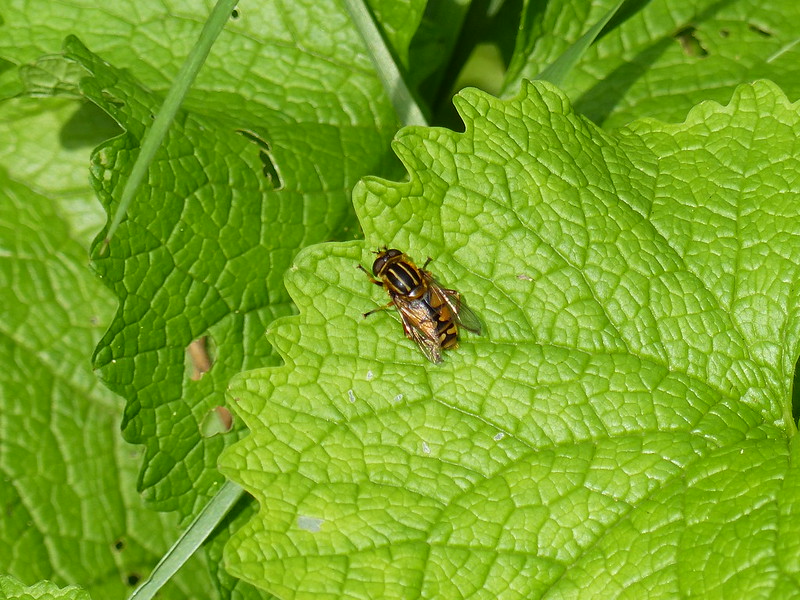 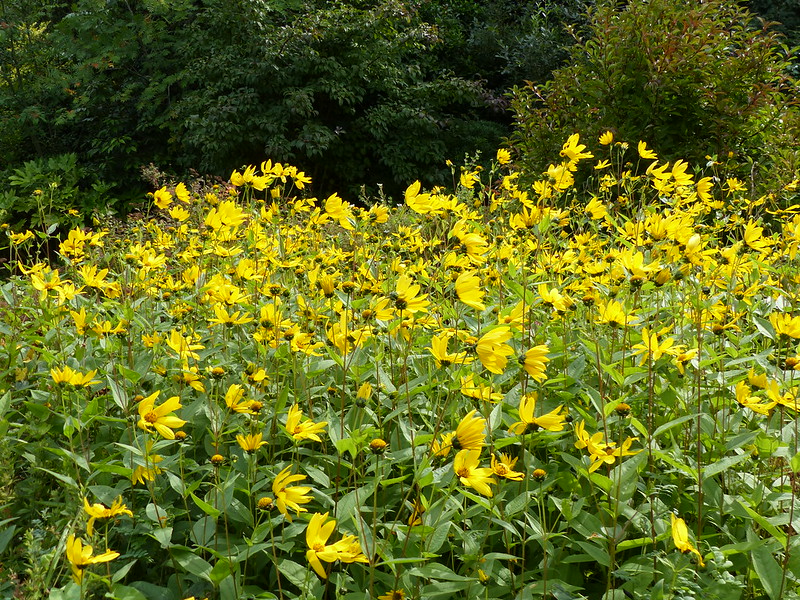 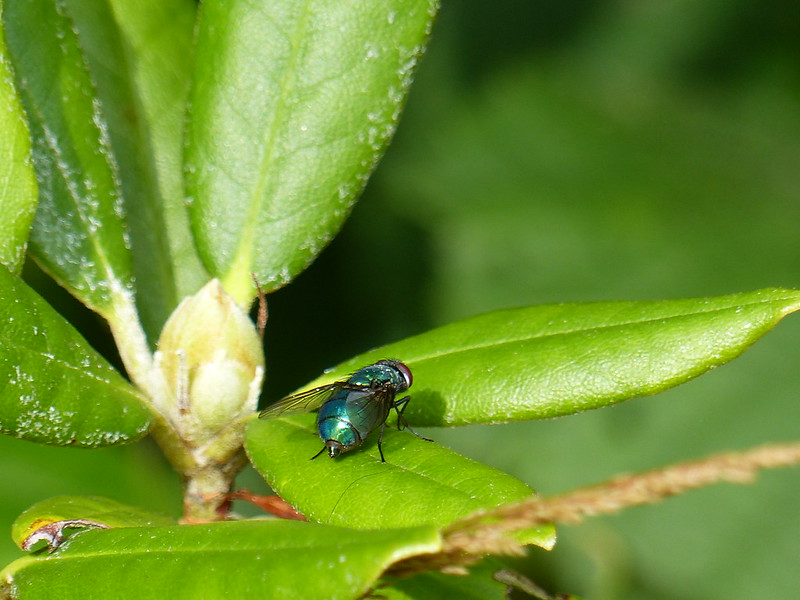 More images from the garden. I know that there will be legions of you wondering what became of the potato plants which unexpectedly sprouted in our compost heap. (Get away – you were waiting with bated breath I’ll warrant). My Dad’s theory is that they grew from peelings, and I can’t think of a better explanation. They did produce a few tatties, not all that many, although every time I dig out some compost I find one or two more. There, I’m glad that’s cleared up! 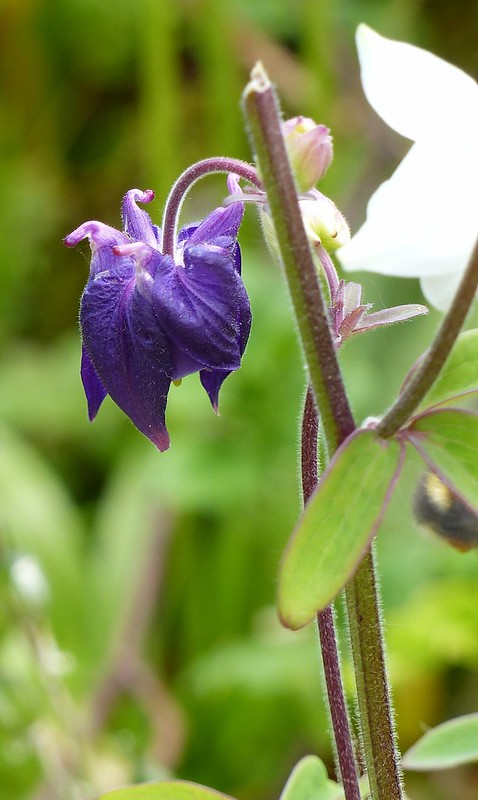 The title pretty much says it all.

I’m a lazy and intermittent gardener. Benign neglect is my modus operandi. It’s not much of a surprise then that we have a lot of weeds. But when those ‘weeds’ are aquilegia vulgaris, or Columbine, well frankly, the more the merrier. 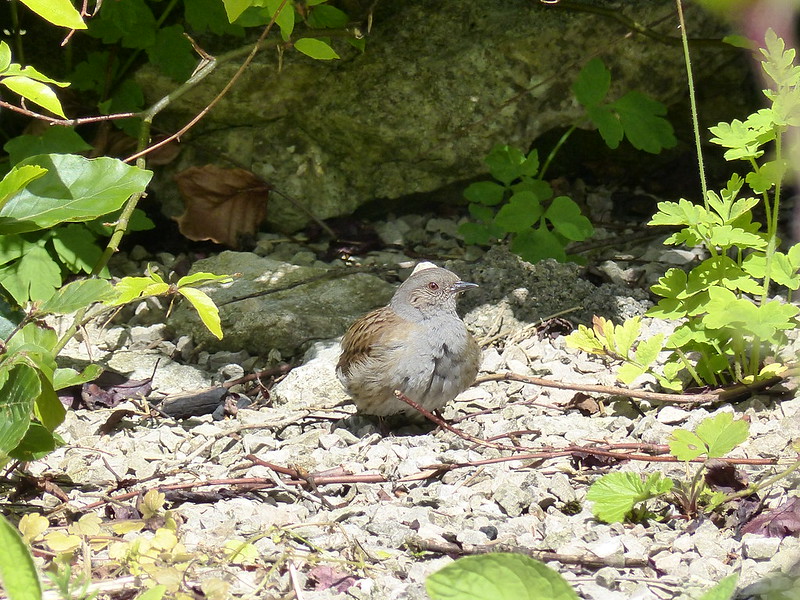 Spotted this LBJ calmly preening itself beneath the beech hedge. A juvenile Linnet? 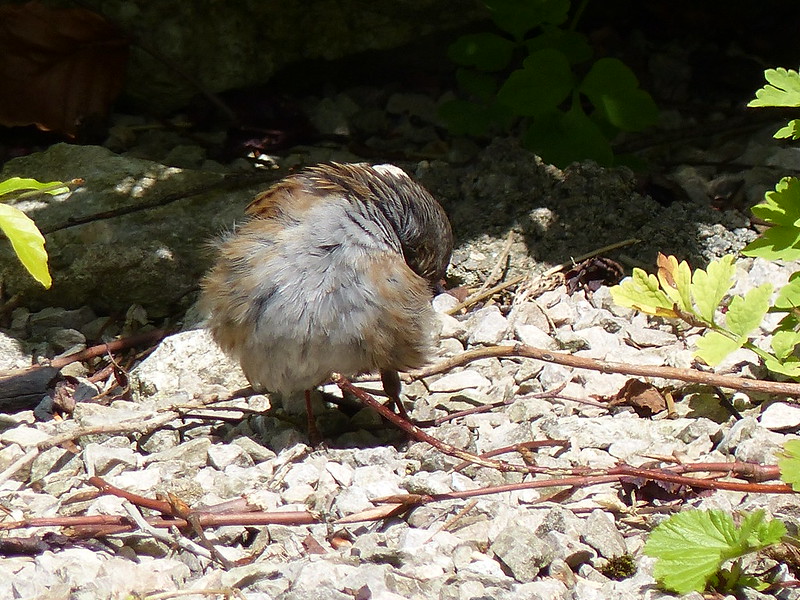 This was back in early June. In between occasional bouts of pretending to be purposefully engaged with some or other garden task, I spent many happy moments pursuing insects with my camera. The Green Alkanet (another weed) was flowering profusely and seemed to be particularly popular with Honey Bees. 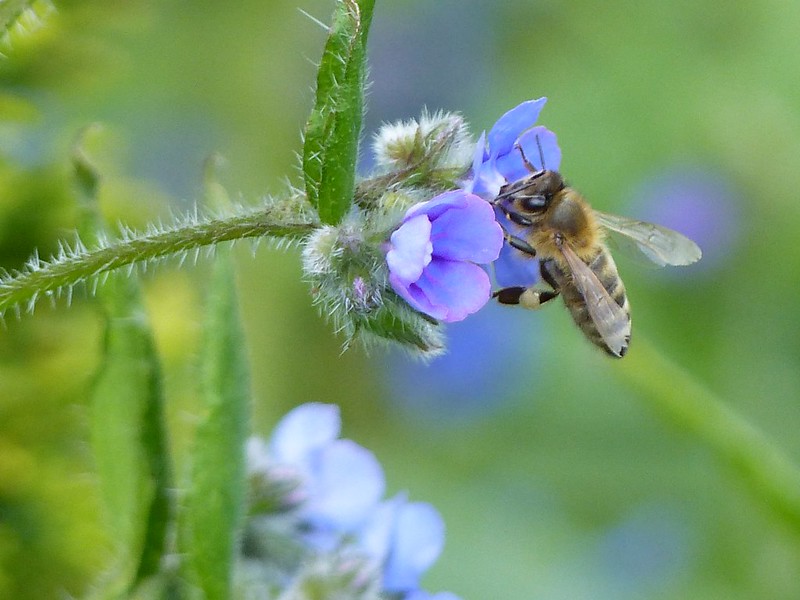 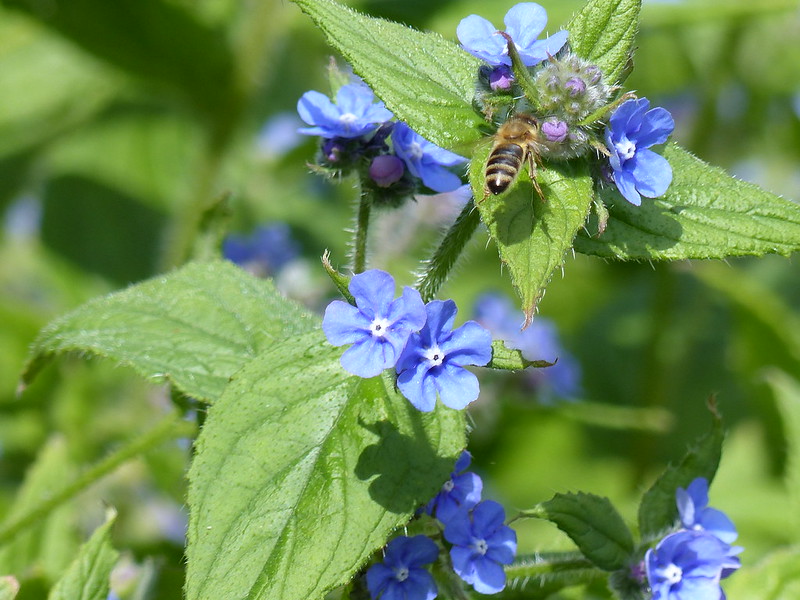 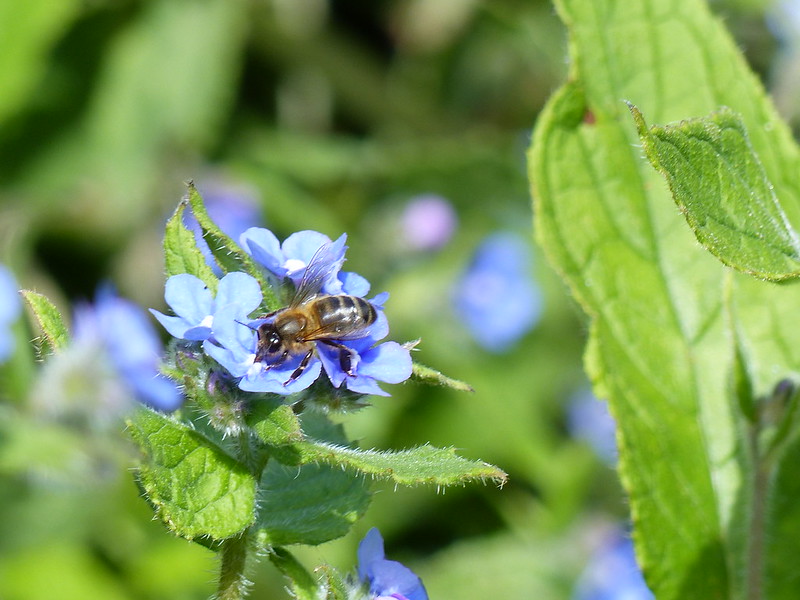 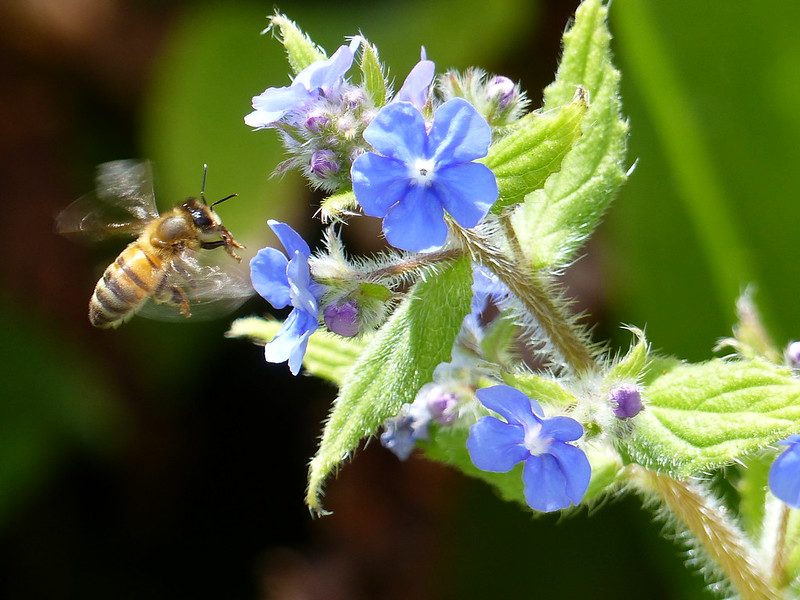 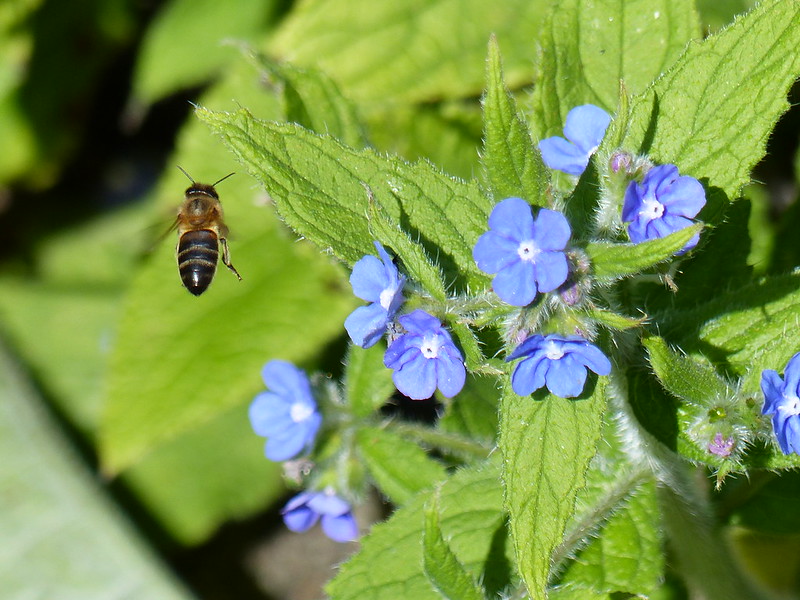 There were bumblebees about too, but they were popping in and out of less open flowers – foxgloves for instance – and so were proving to be much more elusive to photograph. 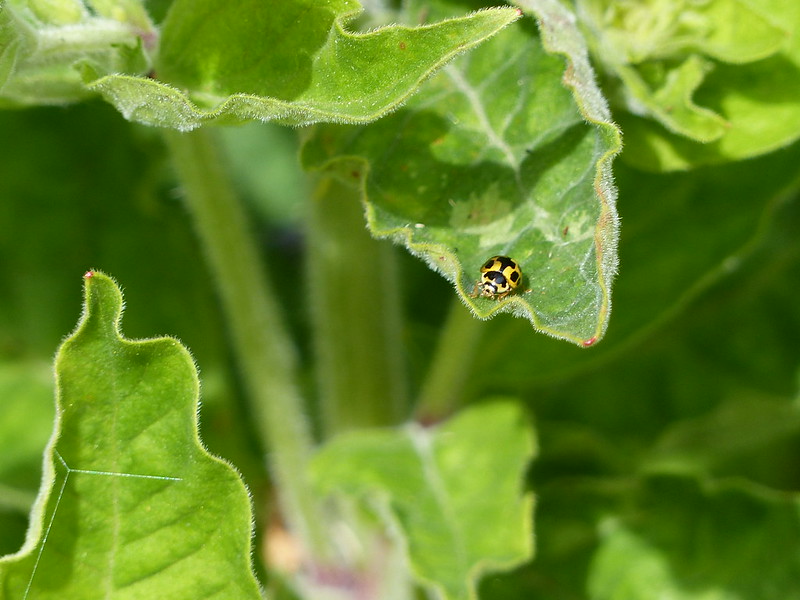 I think that this is a 16-spot ladybird. Feeds on mildew apparently. 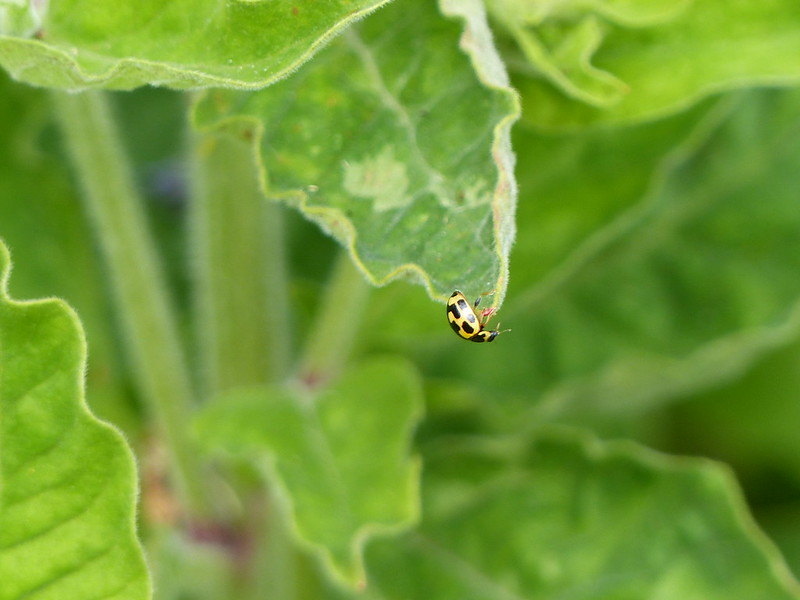 Warm days in the garden have been far and few between this summer and we haven’t seen either the same number or variety of butterflies as we would usually expect to encounter. 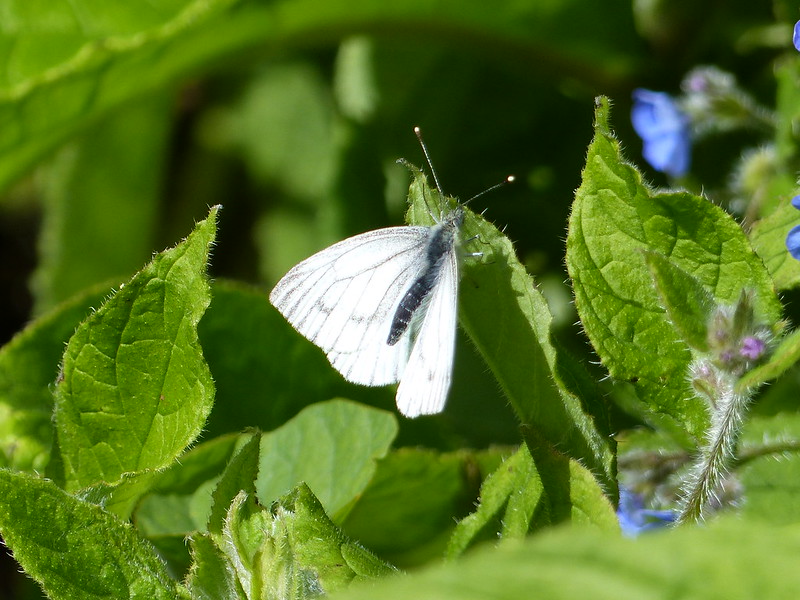 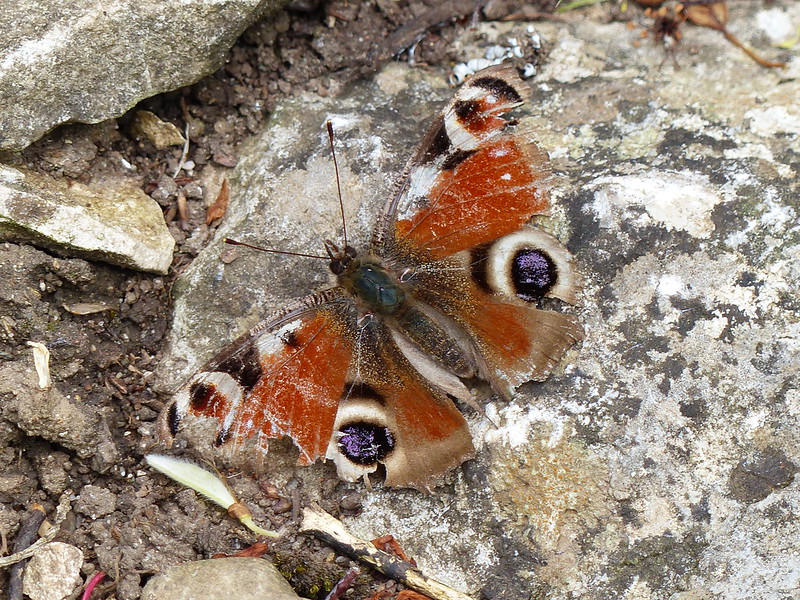 Over by the compost bins this dapper fly… 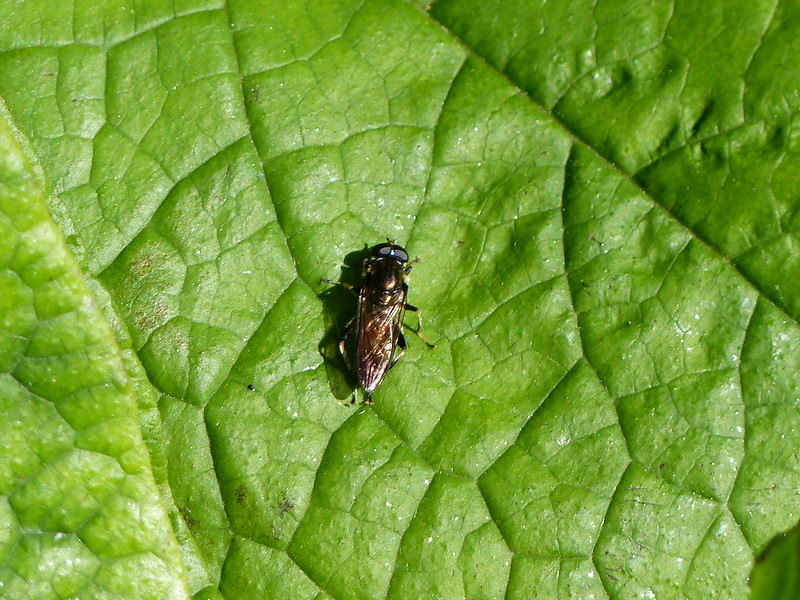 ..was sunning itself on a broad leaf. I suspect that it’s a hoverfly, maybe menalostoma scalare. 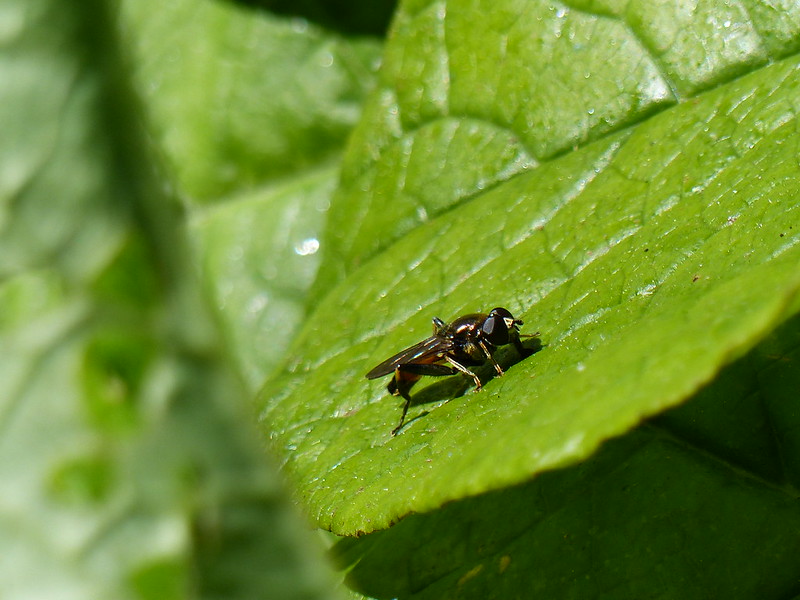 Or not. Opinions, as ever, always welcome. 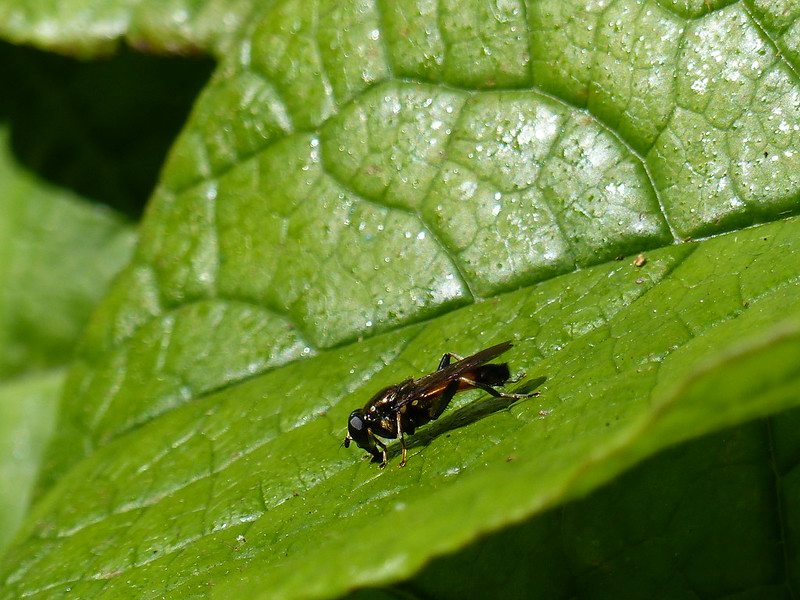 Meanwhile, in the compost heap itself something was sprouting… 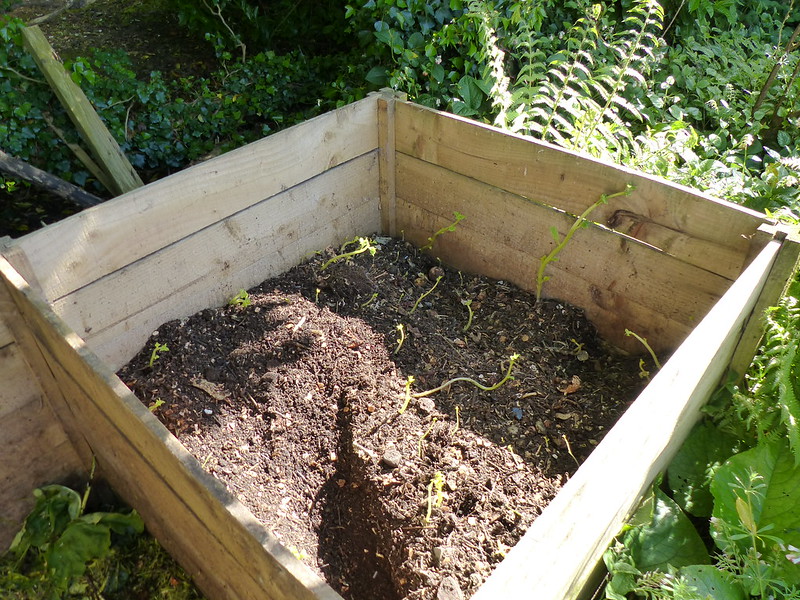 (And, you can perhaps tell, something had dug a substantial burrow through from one side to the other.)

All of our vegetable peelings and trimmings go into the compost; it seems a few bits of potato peel were sufficient to produce a number of new plants. So I took the lid off the compost and left it open, to see what would happen. More of which anon, no doubt. 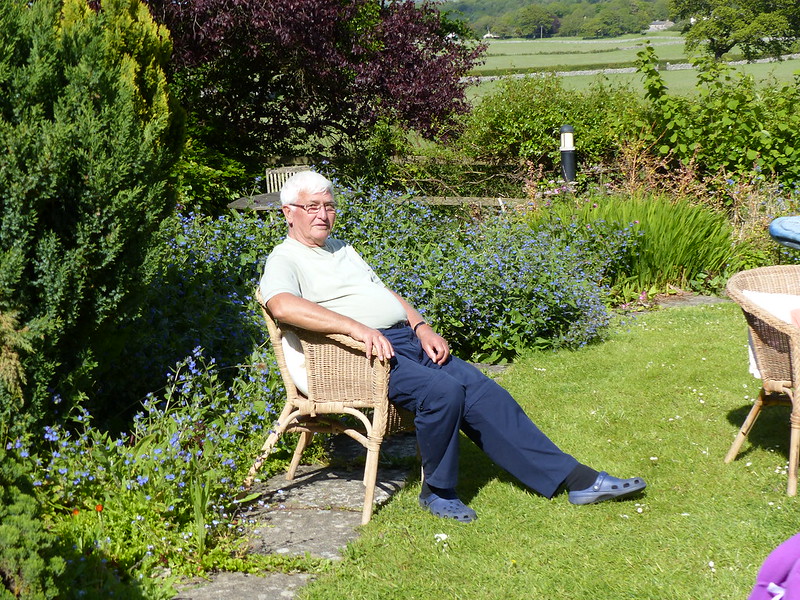 All of the family were pottering in the garden. A had put my Mum to work weeding in her designated section of the beds. My Dad chose to enjoy the sunshine. (That’s the alkanet behind him. Some of it anyway) But eventually I enlisted him to help with the barbecue with which we rounded off the day: 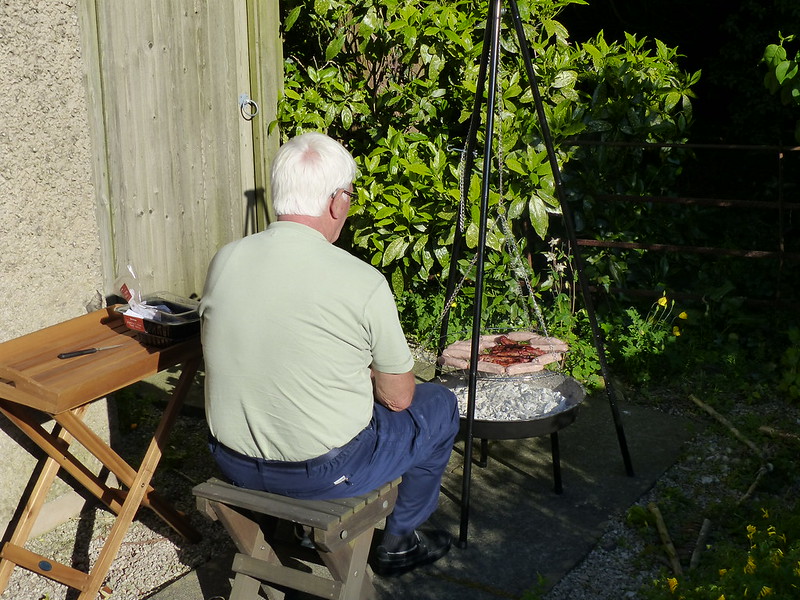 A Sunny Day in the Garden