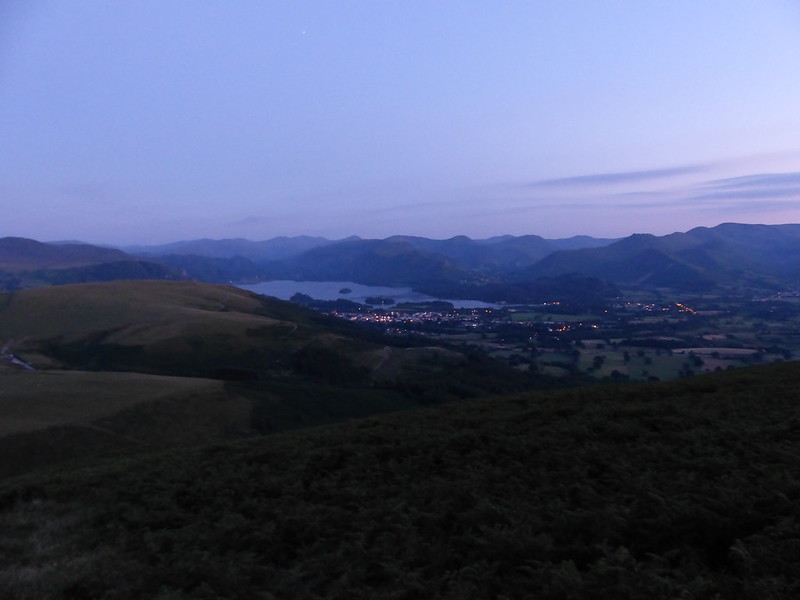 Keswick and Derwentwater – it was quite a bit darker than this photo suggests.

Friday evening. S has a class on the climbing wall in the Sports Centre at Lancaster University. It had been a busy week: S had been the Artful Dodger in his school’s production of Oliver (which was brilliant, although I may be a little biased). I’d also had a late evening at work, so hadn’t managed my usual evening walk(s). What’s-more, the nights had been hot and sticky, at least by local standards, and I’d been finding it hard to sleep. Driving home with S I had an inspiration – a way to get out for a walk and get a cooler night. Back at home I hurriedly grabbed something to eat, threw some things into my rucksack and set-off for Keswick.

I parked in the high car-park behind Latrigg, which was quite full. There were several occupied campervans which I guessed were staying the night, but numerous cars also. A couple approached me and asked about potential wild-camping spots. They’d ended up here by default after having problems with closed roads. It occurred to me afterwards that they may have been heading for the end of Haweswater, because when we were there a few weeks ago, somebody had been larking about with road-closed signs and diversion signs even though there was actually little or no work going on. Anyway, I wasn’t much use to them; I haven’t camped in this part of the Lakes before and haven’t climbed Skiddaw in an absolute age. They decided to try Latrigg, but soon overtook me on the broad path up Skiddaw, looking for a spot on Jenkin Hill, where I saw them again with their tent just about pitched. 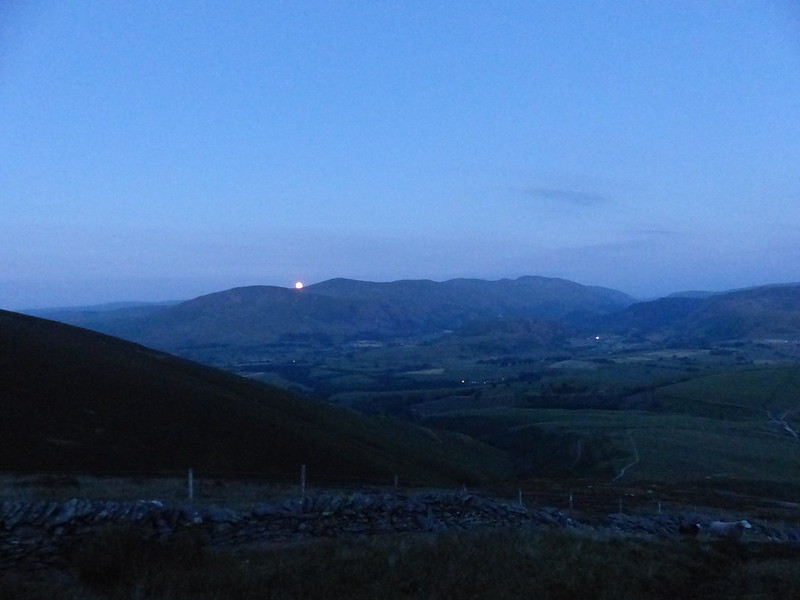 The moon rising over the Dodds.

It was already after sunset when I started my walk and I was surprised by the freshness of the breeze, so much so that I hastily stuffed an extra jumper into my bag which I happened to have in the boot of the car. TBH and I had noticed that the moon was full when we went out for a short stroll after Little S’s theatric triumph, so I was anticipating a light night and that’s how it turned out – I only used my headtorch close to the top of Skiddaw when the ground was rocky and I wanted to avoid a trip. 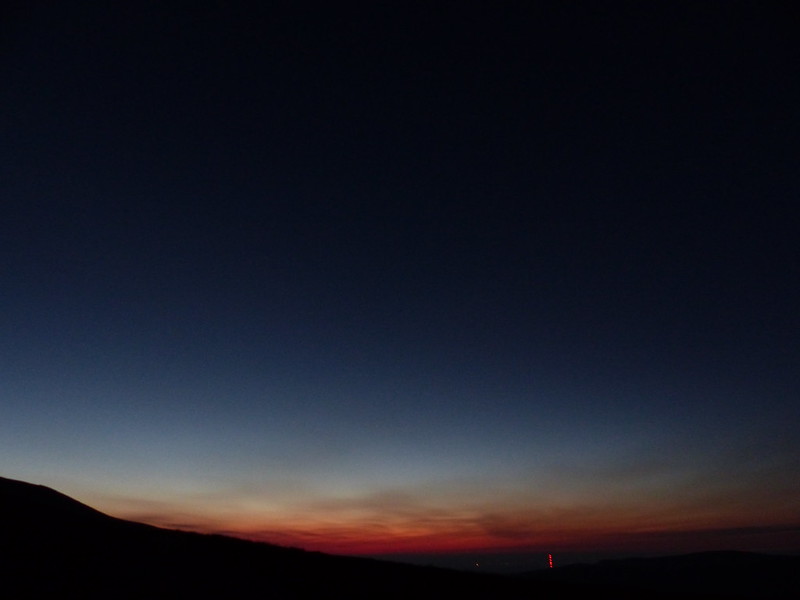 I arrived on the top at around half twelve. Even then the sky to the north still held a good deal of light. There were a few people about – I suppose that this is a traditional weekend for fell-runners completing the Bob Graham Round.

I was after something much more modest – a place to kip-down for a few hours. I’d remembered that the highest parts of Skiddaw are very rocky – like a slag heap, one friend has subsequently described it – but felt confident that I would find somewhere. Ironically, given my enthusiasm for wild-flowers, it was the sight of tiny white stars of the flowers of a bedstraw – there are many species – which stood out in the darkness and led me to a spot with at least a thin covering of soil. It’s wasn’t a spot I could recommend – sloping, uneven, hard, stony and not entirely out of the, by now, pretty fierce wind, but, somewhat to my surprise, I not only slept, but slept quite well. It was cold though – I discovered that when needs must I can get right down inside my sleeping bag and close it over my head. Between my sleeping bag, the thin pertex bivvy bag I have and the extra jumper I’d brought I just about stayed on the right side of comfortable.

I woke at around three, momentarily panicking a little because it was so light that I was worried that I’d missed the sunrise, despite the fact that I’d set an alarm for 4.20am, precisely to avoid that eventuality. I should have taken a photograph at three – the colours in the northern sky were superb, but I’m afraid my head was soon down again for a little more shut-eye. 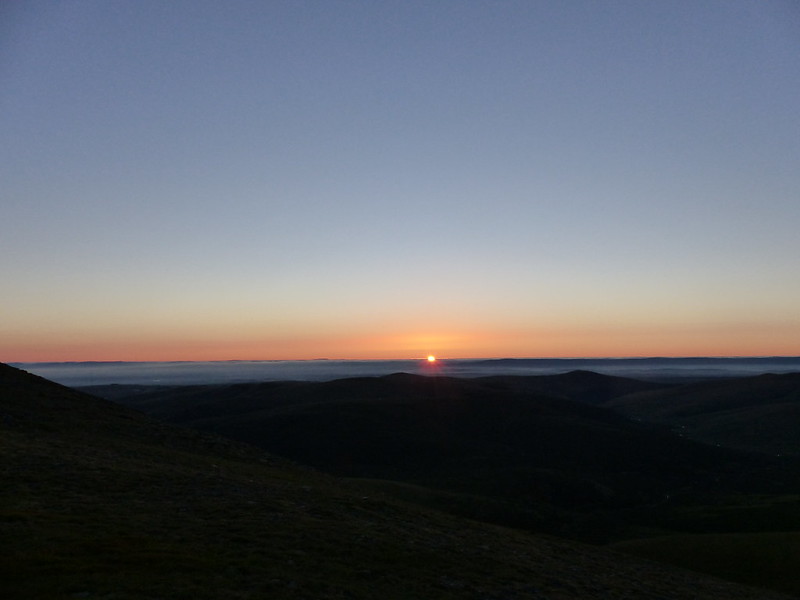 In the event, I didn’t need the alarm: two groups of people walked past my little hollow about 10 minutes before it was due to go off, timing their arrival on the top just about perfectly for the sunrise. 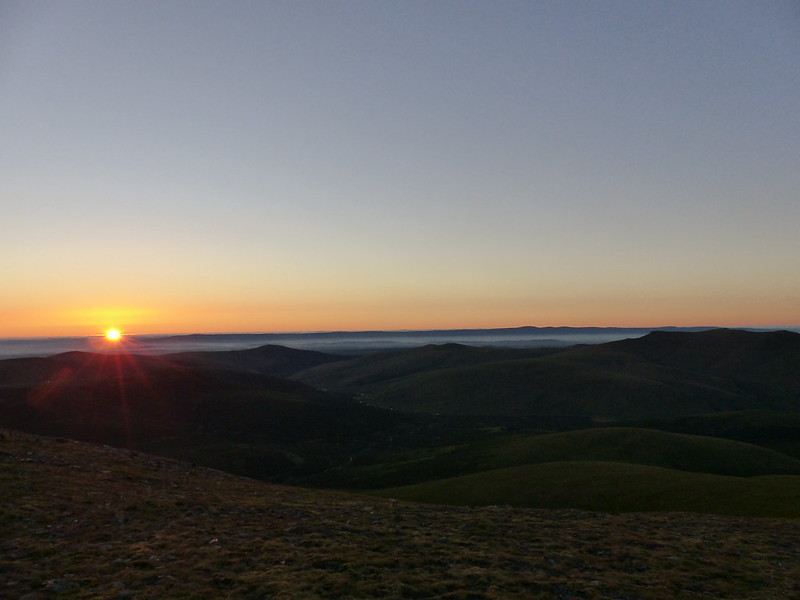 It’s a while since I’ve watched a sunrise from a mountain. Perhaps I won’t wait so long this time to repeat the experience. 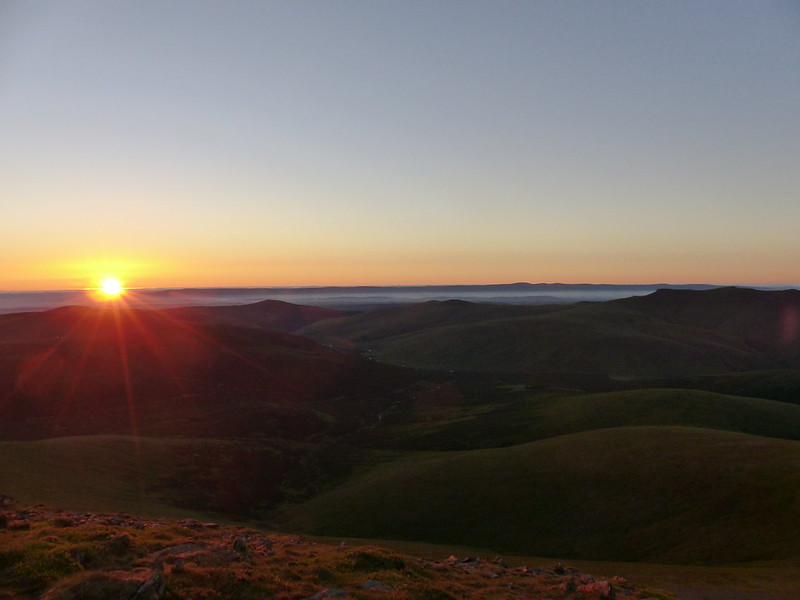 There was evidently a layer of cloud hanging low over the Solway Firth to the north and the Eden Valley to the east and odd wisps of mist closer to hand. 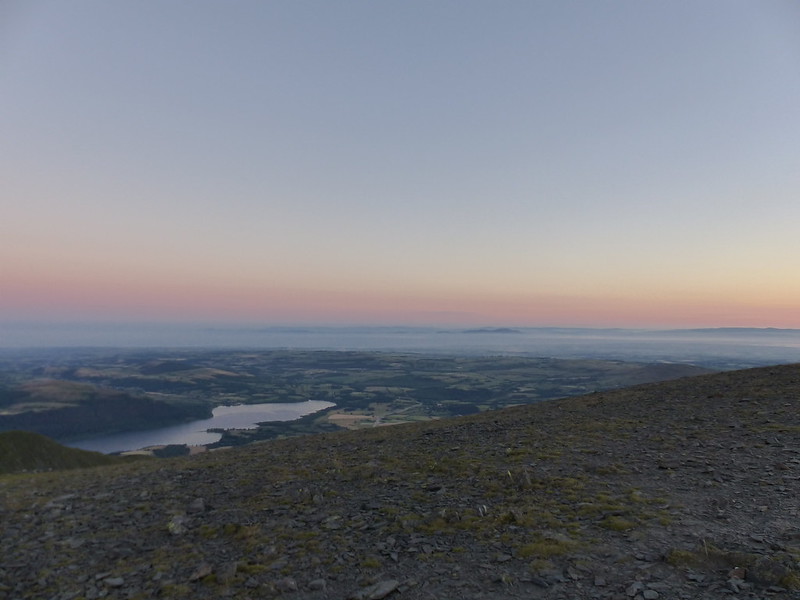 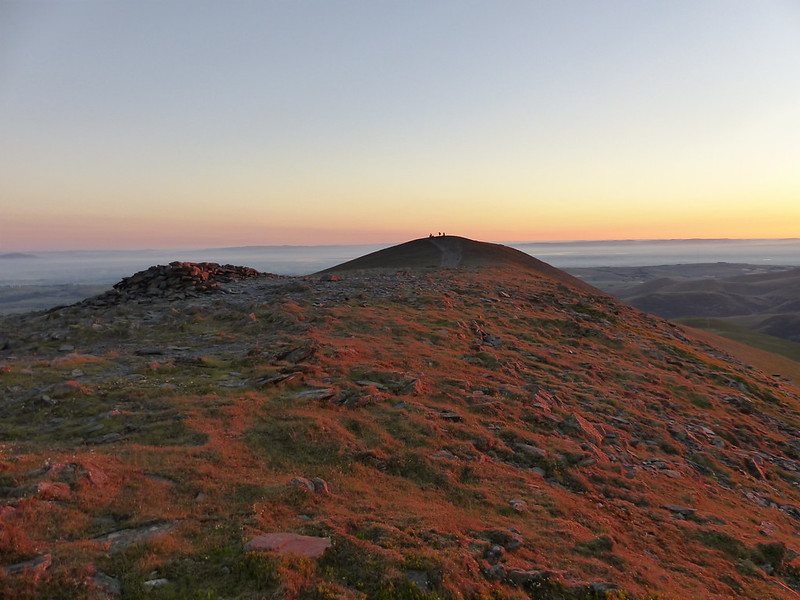 An early party on the summit. 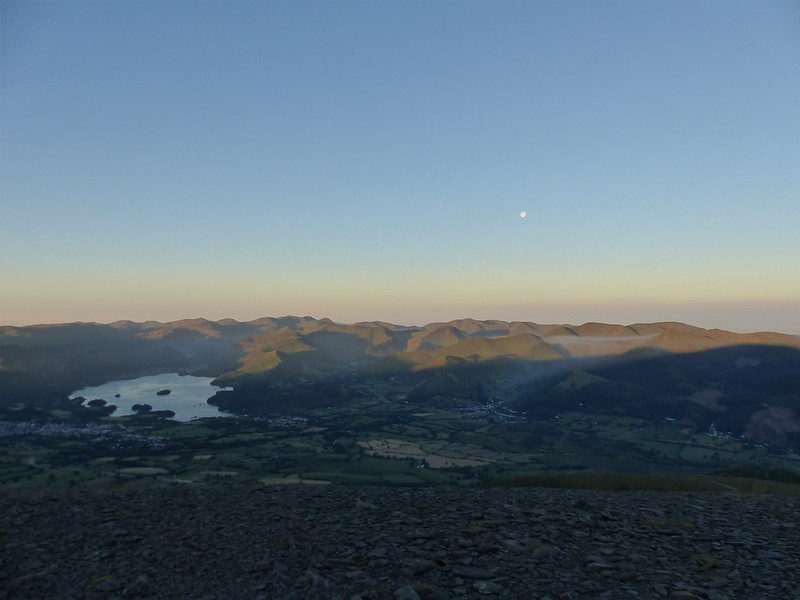 Derwentwater and the surrounding hills.

Derwentwater and the Fells pano.

For reasons which now escape me, I climbed Skiddaw Little Man in the dark on the Friday night, but I’d stuck to the main path which omits the top of Jenkin Hill, and avoids Lonscale Fell and Lonscale Pike altogether, so on my way back to the car I diverted slightly to take them all in. 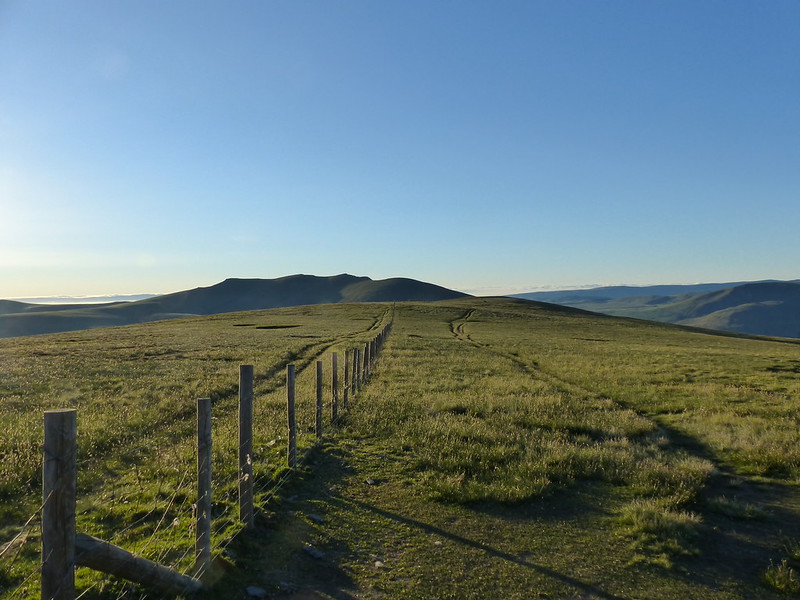 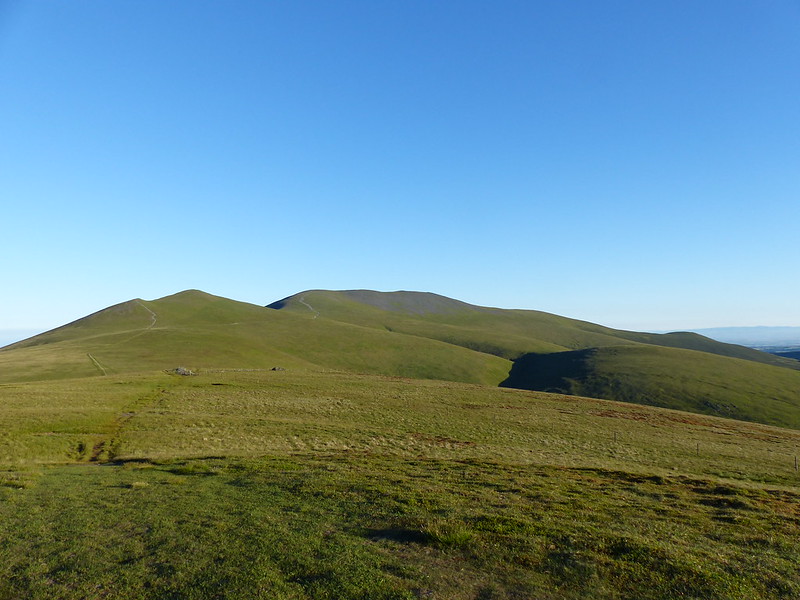 Looking back to Skiddaw Little Man and Skiddaw. 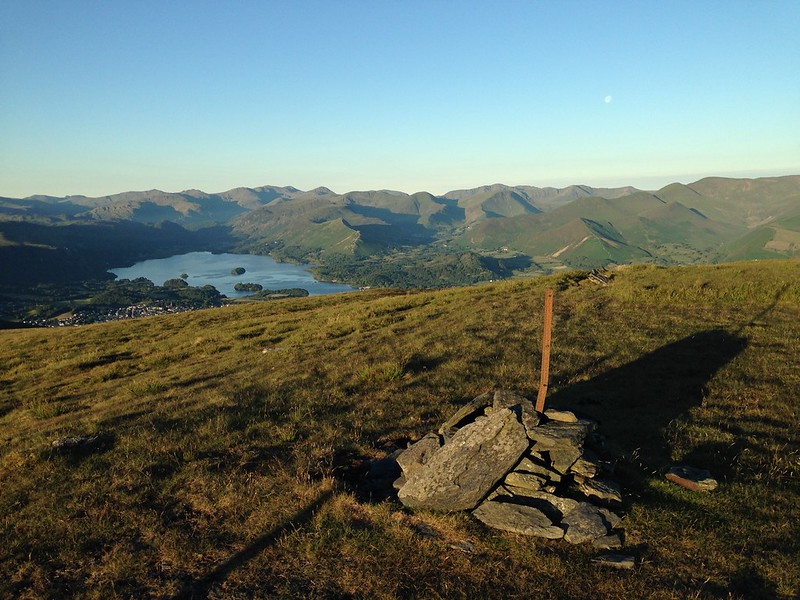 Derwentwater and the Fells from Jenkin Hill.

From Lonscale Pike, I found a slight path, which followed the wall down close to the edge of Lonscale Crags. Part way down, I realised that the weather had already warmed up considerably and decided to sit down to admire the view with a bit of porridge and a cup of tea.

Nearby, I spotted this large caterpillar… 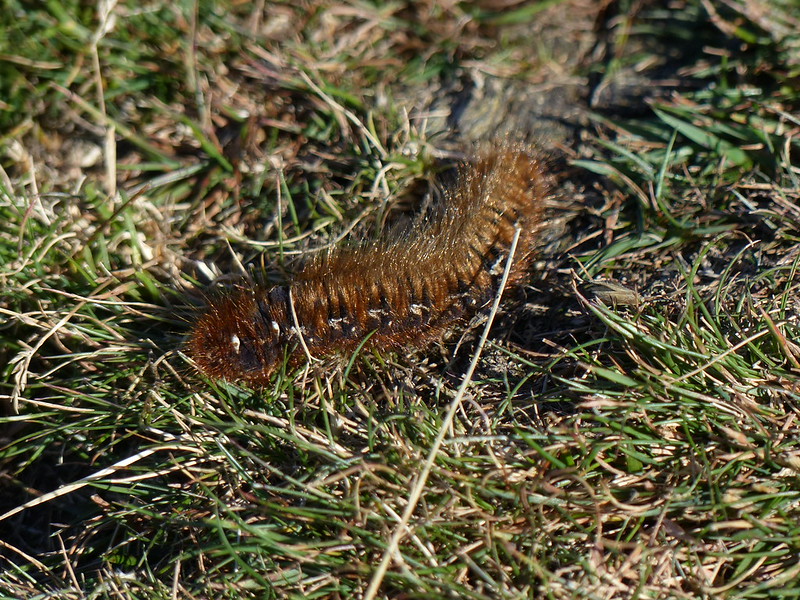 …which I think is of the Hairy Oak Eggar Moth. B and I saw some similar caterpillars on Haystacks two summers ago. 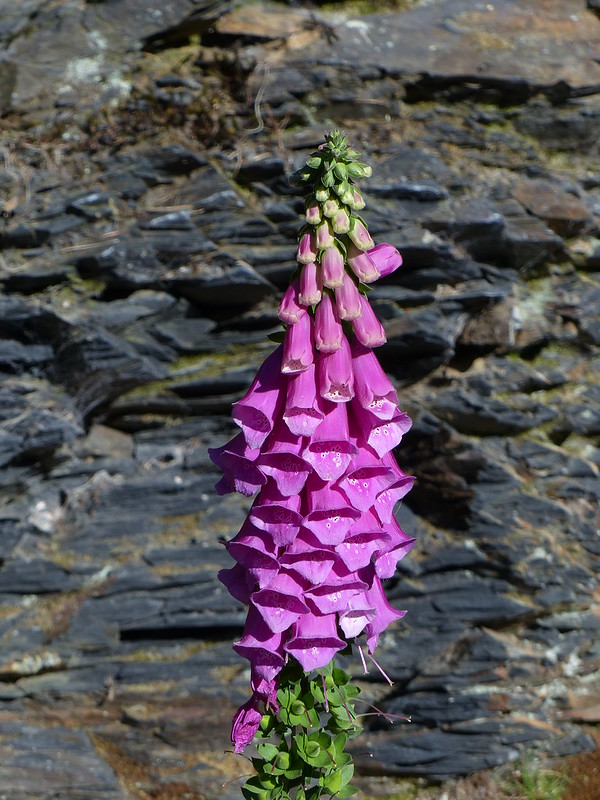 As I got close to the car park again, and was down amongst the bracken covered hillsides, there were numerous moths and some Small Heath butterflies and a host of small birds about. Sadly none of my photos turned out very well.

Back at the car, I dumped my rucksack and set-out to tick-off Latrigg, it being so close by and the weather so favourable. Incidentally, the car park was already full, at 9 in the morning, breaking the usually reliable rule that car-parks in the Lakes are almost empty before 10, I presume because people were seeking an early start to escape the heat of the day. There’s a direct path to the top, not shown on OS maps, but also a more circuitous one, which I chose, partly because I wasn’t in a hurry and partly because I thought it would give better views.

Latrigg was busy with walkers, runners and Skylarks. 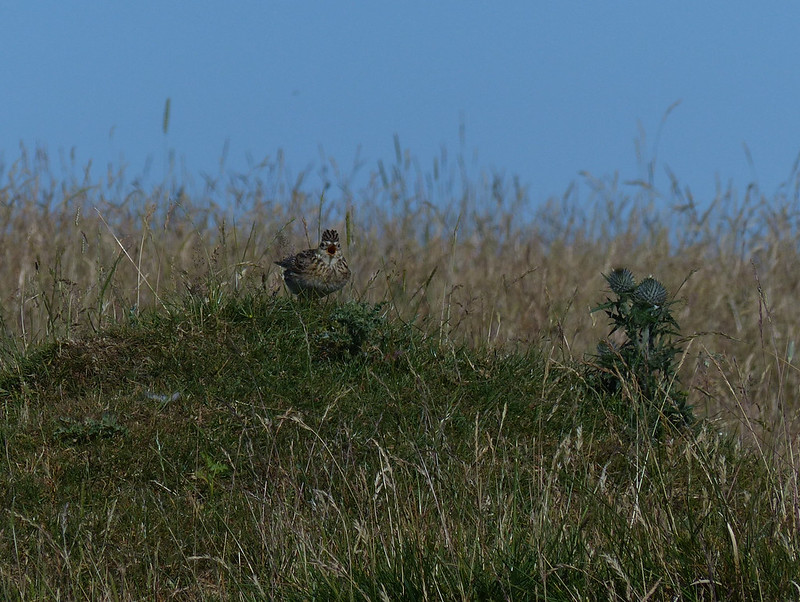 I watched this Skylark in flight and then, after it had landed on a small mound, walked slowly toward it, taking photos as I approached. 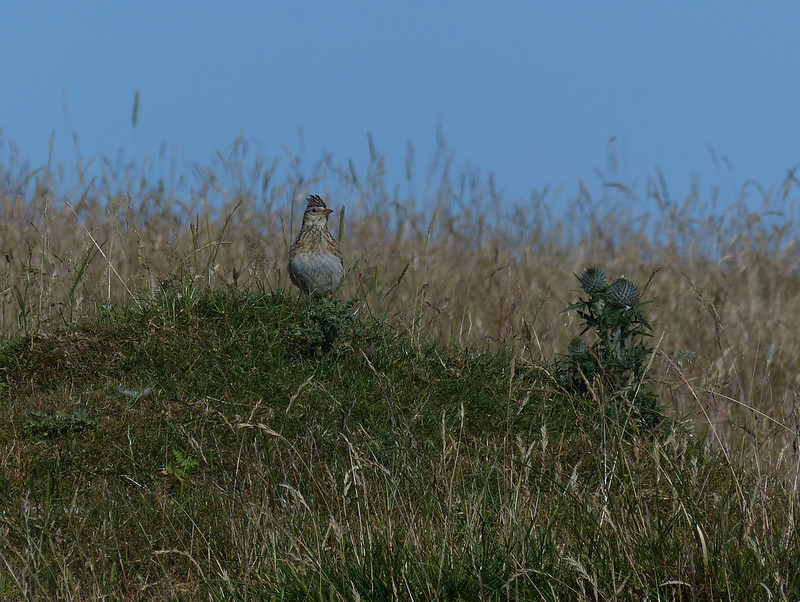 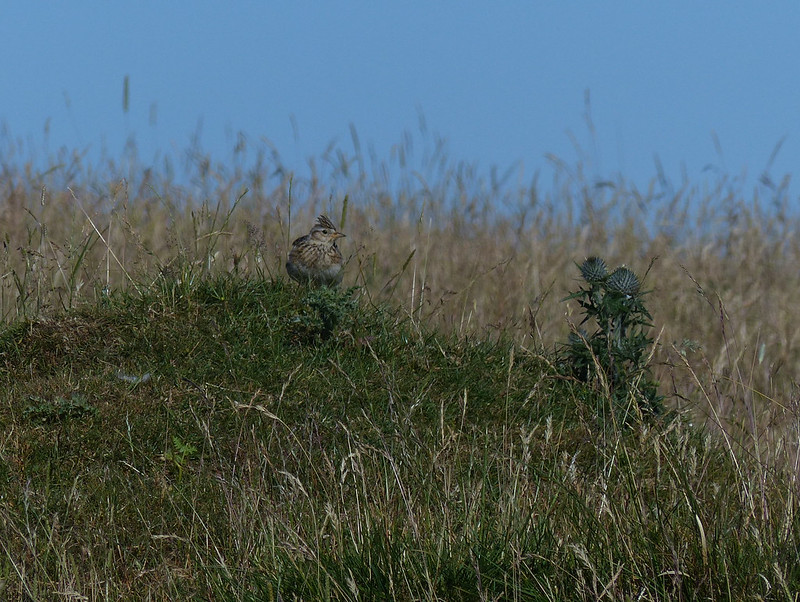 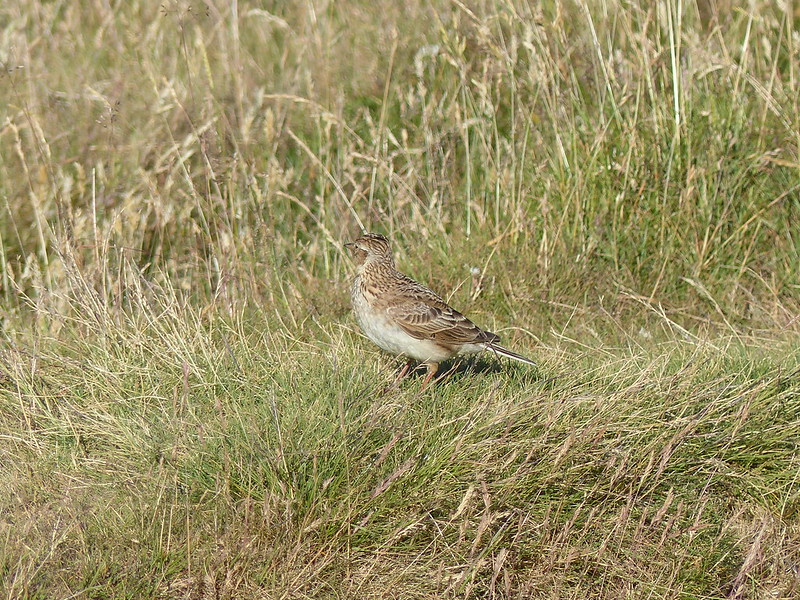 …didn’t require the same effort. It landed quite close to the path and then flew just a short distance further on, before having a ‘dust bath’ on the path. Although it was much closer than the first bird, it wouldn’t pose and look at the camera in such an obliging way. 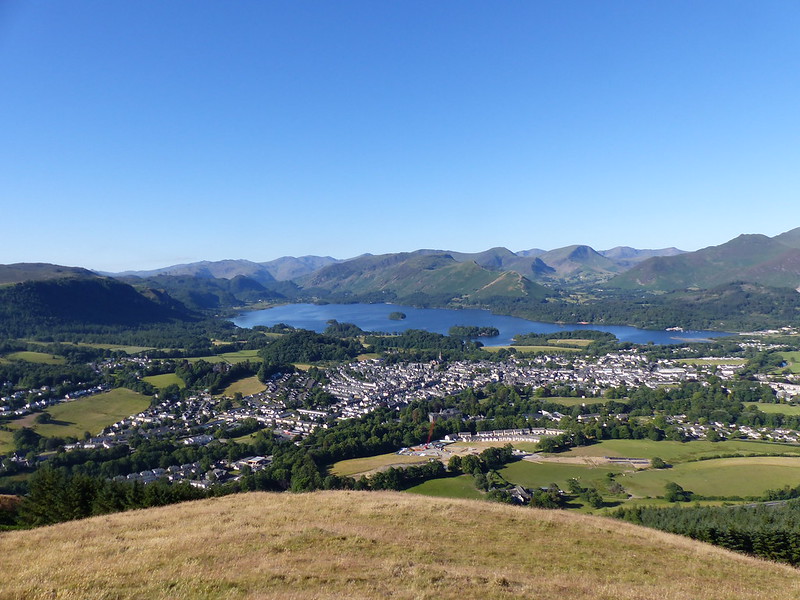 Highly enjoyable, although it did leave me a bit wiped out for the rest of the weekend. Hopefully, I’ll try another summit bivvy, if the opportunity arises – without a tent I can manage with my small rucksack, which wasn’t too heavy, aside from the two litres of water I was carrying.