TBH had organised one final treat for us. We hopped on to an underground train to Brooklyn. A bit too hastily; it turns out that Brooklyn is a very big place and we were on completely the wrong line; we travelled a long way past where we wanted to be, before changing trains to come back again, to Williamsburg.

We were heading for Two Boots Pizza. We ate quite a lot of pizza whilst we were in the states and the meal we had here, perched on an old leather sofa just across for the take-away counter, was by far and away the best. What’s-more, TBH had a choice, I think, of three different vegan pizzas; our more general experience was that vegans are rarely catered for in the US.

But we weren’t just there for the pizza. TBH had tickets for a comedy gig in the tiny back room behind the pizza shop.

The tickets were free, and included a free beer. Can’t be bad! I think we saw 5 (or possibly six) comedians and three of them were very, very funny. I wish I could remember some names!

In hindsight, this was one of my favourite parts of our trip to New York – something a bit different and off the beaten track.

On the way back to the hotel, we passed this fountain on 6th Avenue. Radio City is in the Rockefeller Centre (of which more to come). The crowds, I think, are queueing to watch a recording of the Tonight Show with Jimmy Fallon. Should have gone to Williamsburg. 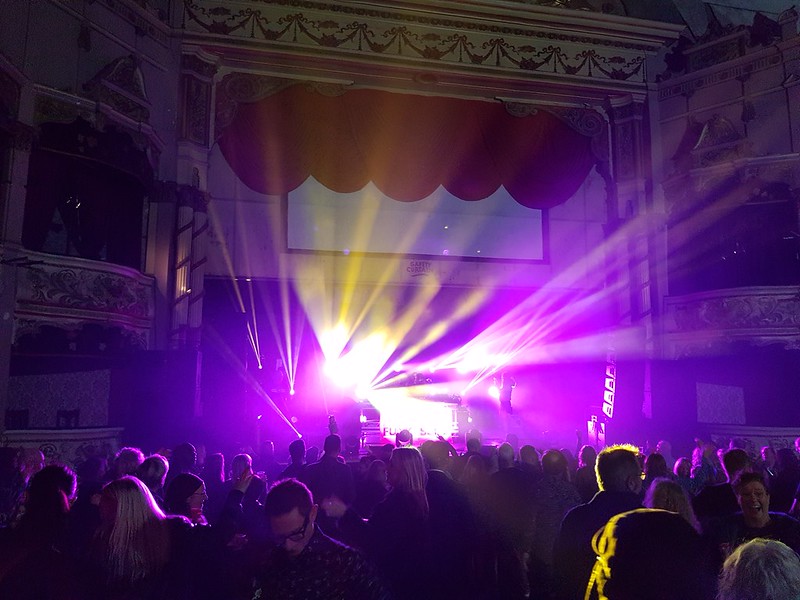 At times over the winter, whilst I felt a little disgruntled that I wasn’t getting as much walking done as I would have liked, I also felt very lucky that I was getting out frequently in the evenings for some culture. The kids are old enough to be trusted on their own these days and so TBH and I were even able to go out together occasionally.

It’s not like me to take photos when I’m out, so these two are rarities. They’re both from a Sunday evening at the Winter Gardens in Morecambe, where we went to see Craig Charles. We knew that several friends from the village had tickets, and I met and chatted to quite a few other friends and acquaintances in the audience. I strongly suspect that I also spotted a few former pupils amongst the crowd too. Anyway, I think it’s fair to say that a damn good time was had by all.

The Winter Gardens is a very strange venue – the floor slopes towards the stage, a consequence of its past as a theatre, but which makes dancing difficult; the toilets were outside in a portacabin and the fabric of the building is visibly still much in need of restoration, but it was good to see the place being used, after years of being closed and neglected. 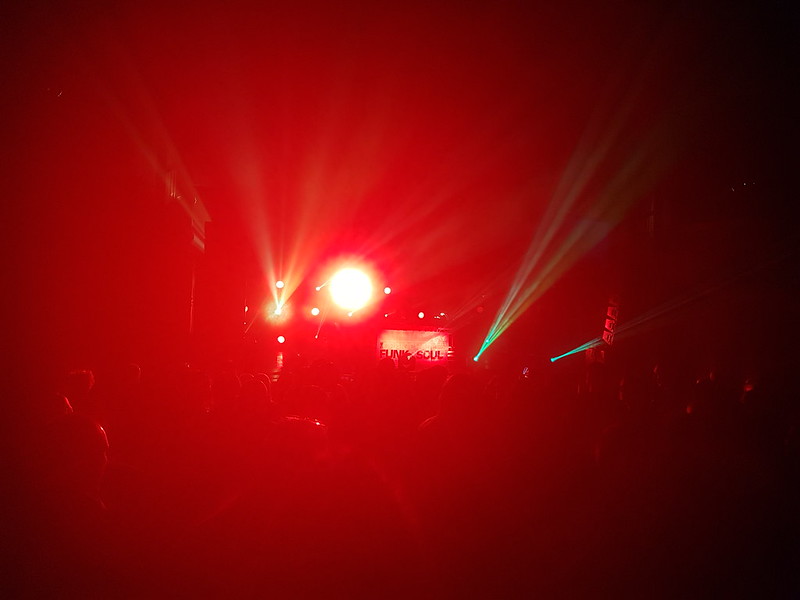 TBH and I had also seen Craig Charles at the Brewery Arts in Kendal, supported by the magnificent Haggis Horns. That was a slightly strange affair because Mr Charles seemed a bit subdued and didn’t interact with the audience in the way that he has on the other occasions that we’ve seen him. The music was superb however. A remix of Sarah Vaughan’s rendition of Peter Gunn stands out in my memory.

Another strange gig at the Brewery which TBH and I attended was Lee Scratch Perry. The three piece band – drums, bass, guitar – were very good, but where were the keyboard player, horn section and female backing vocalists we could hear? The band would launch into one of the many of the familiar tunes which Perry produced – Police and Thieves, War Ina Babylon, Roast Fish and Cornbread – and Perry would start with a line from the song, or some approximation to a line, but then continue by half singing an apparent stream of consciousness, principally about the audience – how much we liked him, how he much liked us etc ad infinitum. Weird. The concert ended, for us anyway, with a contretemps between Lee Scratch Perry and the security after a bouncer intervened when an audience member offered Perry a spliff. It was all a bit sad, particularly, from my point of view, since I’ve been wanting to see Lee Scratch Parry live for a long time.

Back in October (I think), the Lancaster Music Festival was, as always, a brilliant affair. I caught up with some old friends and saw lots of acts, many of the great fun. In particular, I managed to see The Uptown Monotones several times. They’re from Graz in Austria and if you ever get a chance to see them live, I can promise that you won’t regret it.

Many, many moons ago, I saw John Cooper Clarke open for The Fall in Manchester. I’d been a fan since a school friend had played me live recordings on his Walkman, which at that time was an exciting and expensive novelty. On his ‘Luckiest Man Alive’ tour this winter, he played in the Ashton Hall, which is within Lancaster Town Hall. I went with friends D, M and C from the village. (At no point did we Run – although we did ‘walk this way’). There were two support acts, including Mike Garry, who was excellent, and who, it turned out, had been working with D’s son J in a school poetry workshop earlier that day. The year before, he did a workshop at our kids’ school, which A attended and raved about – it’s the only time I can remember her having anything positive to say about poetry. Anyway, JCC was hilarious. Afterwards, we dropped into the Penny Bank for a pint and D and M were soon dancing and singing along to an excellent Jam tribute band.

Somewhere in amongst all this lot, old friend Uncle Fester drove up from Manchester and we went to see Martin Simpson at the Platform in Morecambe. What a revelation. I was there mainly on the strength of his most famous song ‘Never Any Good with Money’ which is about his father. He played pretty much the entirety of his latest album and much more besides and I loved it. I shall definitely be getting tickets to see him again.

Finally, our friend L asked me if I wanted to see John Shuttleworth at the Grand in Lancaster. I’ve seen him before a couple of times, but not for many years. His act is, I suppose, entirely predictable, but he had me in stitches. It’s the gentlest of humour, very clever and very, very funny.

Rather than try to include samples of all the music I’ve mentioned here, I think I’ll maybe spread them out over several posts. Here’s a start: