Photos from a week’s worth of walks from back in January. This first is from the Sunday, the day after the glorious Saturday which featured in my previous post. As you can see, the snow was gone and so too the blue skies and sunshine.

Monday must have been another drear day, because I had a reasonably substantial stroll after work, but only took photos from The Cove when it was almost dark.

On the Tuesday, I didn’t start teaching until after 11 and so took the opportunity to have a wander around Jenny Brown’s Point.

The weather was a complete contrast from the day before. I think it was even quite mild.

The tide was well in.

The drab, dingy weather returned on Wednesday and Thursday.

Around the village, people had put their Christmas lights up early and now left them up late.

Using MapMyWalk usually persuades me to take at least one photo on each walk, so that I can attach it the file for that walk. I quite like having a visual record even of the gloomy days.

Friday brought a hard frost in the morning.

And the longest walk of the week in the afternoon (only about six and a half miles).

I actually took lots of bird photos, particularly of a Little Egret which was close in shore, but the light was a bit weird…

Rounding Arnside Point into the Kent I was surprised to see that Hampsfell and the other hills across the river had a covering of snow.

And then, when I climbed to Heathwaite, I discovered that we had some too…

In fact, on the Knott, there was quite a bit…

It was getting late, and I had the top to myself. I was disproportionately chuffed to have found some snow to crunch, and had a good wander around the highest part of the Knott.

On the Sunday, I walked our now habitual Sunday circuit around Jenny Brown’s Point not once but twice, in the morning with our neighbour BB…

And in the afternoon, with TBH.

Over the eight days represented here, I walked around thirty miles. Hardly earth-shattering, but not bad for a week when I was working and when daylight was at a premium. Working form home is a completely useless way to teach, but, from a completely selfish point of view, I was all in favour.

So, pop-picker’s, the post’s title is from a song which, I’m pretty sure, I’ve shared here before.

Anybody know it? It’s from an album called ‘Magic, Murder and The Weather’ if that helps?

Advertisement
The Weather is Variable

With snow on the ground, a little bit of mist about and a fairly clear sky, worth getting out for an early work. Not that you need to be up that early here in early January to catch the sunrise.

I had a short walk, across the fields and then up into Eaves Wood.

Later I was out again and did a very similar walk with the next door neighbours who had a chore to do at the Silver Sapling campsite, probably breaking the rules in some way into the bargain.

Later still, I was out on my own again, wandering around Jenny Brown’s Point. The light was superb.

Right through the winter, there’s a really impressive Starling Murmuration and roost at Leighton Moss. Of late, I haven’t made the effort to get down there to see it often enough. On this occasion, as I walked along the top of the small cliffs of Jack Scout, part of the murmuration flew along the coast behind me and swooped past me following the cliffs. Usually the Starlings fly just above the treetops, but this time, where there weren’t any trees, they were low, hugging the cliffs, and so I was enveloped in the flock and in the astonishing whirr of thousands of wings. It was breathtaking. They came around three or four more times, but never quite so close.

The sunset was highly impressive. I watched for ages, taking lots of photos (on my phone, I didn’t have my camera with me). When the cold started to seep into my bones, I set off for home, but then, looking behind me, realised that the colours had intensified even further. I went back to the clifftop to take more photos, but then my phone’s battery died.

Unlike my camera, my phone seems, if anything, to rather underplay the colours of a sunset. This one really was spectacular. Especially after the battery had died. You’ll just have to take my word for it!

Another very memorable day, chiefly because of the Starlings.

Snowy Scenes, a Murmuration and a Sunset

So we went back to work. Then we didn’t go back to work. And so began the second lockdown. In the first lockdown, we were expected to set and monitor work for students; this time the emphasis was very much on live lessons online. I was surprised by the impact of sitting down all day (mostly on my back and shoulders), something I’m not used to at all.

At least, with no commute, I could get out for a stroll as soon as work was done. I have a lot of sunset photos from the Cove from that first week of January…

Also, because we stuck with our revised timetable, mostly consisting of two hour lessons, when I had frees they were long, sometimes even three hours when lunch was included. This meant that, at least once a week, I had an opportunity to sneak out for a longer walk, deferring my planning etc until the long dark evenings.

It was a cold week: this is Bank Well, frozen over on the Thursday…

And then, on the Friday, it snowed. A and B were unusually keen to join me for a walk late on a Friday afternoon. (S had already set off to the Lots with a sledge and his friend T).

By the time we reached Lambert’s Meadow (which, often very wet, was frozen over), it was coming down thick and fast and settling rapidly. 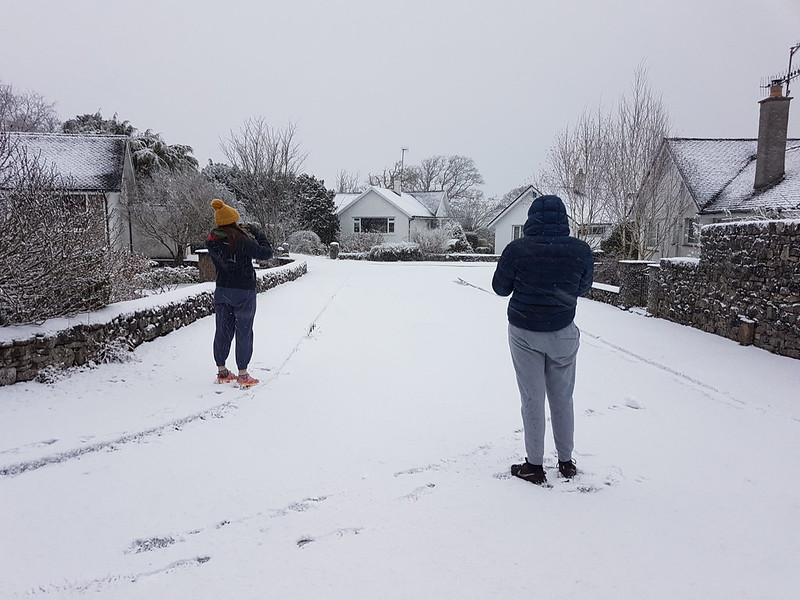 Is the last photo I took, principally, I think, because it was getting dark. We headed down to The Lots to meet S and T, and found lots of children and parents from the village sledging on the humps and hollows there in the dark. Everybody was in good spirits and by responding exactly as we usually would to these unusual circumstances, it felt like a moment of light relief and somehow a brief return to normality of some kind.

The next day was a good one too. I took a lot of photos, so I’ll leave that till my next post.

New Year’s Eve brought a light dusting of snow. A is always keen to get out and enjoy snow when it comes, which is not that often here. We first when up to the Pepper Pot to get a view over the village and then headed down towards The Cove.

I don’t think snow usually settles on the sands of the Bay.

I certainly can’t recall seeing anything like this before. I suppose it was because it had been so cold the day before.

We were both struck by the great white expanse and the contrast with the heavy grey clouds above.

The cloud started very low, and subsequently dropped even further so that, after our walk, the village was enveloped in fog.

Later, however, it seemed that the fog was breaking-up and I set out again for the Pepper Pot. I didn’t take any photos in the fog, but it was still quite dense at home. By the time I was in Eaves Wood though I could see blue sky overhead…

Unlike snow, fog is pretty common place in this area. I can think of many occasions when I’ve thought that the fog was thinning and hoped that the small elevation of Castle Barrow might be sufficient to lift me above the fog – but I’d never actually seen that, until today…

It was an amazing sight – something I’ve seen in the mountains before, but didn’t expect to see from just 70 metres above sea level. I knew the rest of the family would enjoy this, so I phoned them and then watched as the fog continued to disperse and other bits of high ground began to appear…

Inland, to the East, Ingleborough was almost clear of mist.

For some reason, long zoom shots of Ingleborough seem to work best when there is snow on the hill.

At first, I had Castle Barrow to myself, except for this Robin, which didn’t seem all that bothered about the cloud inversion.

All in all, a very memorable New Year’s Eve, even if we couldn’t party with our friends like we usually would.

So – the blog has advanced to the final couple of days of last year. These photos are from a beautiful, still day when TBH and I took one of our favourite wanders around the coast to Arnside.

As you can see, with no wind, both the sea and the River Kent were mirror calm and reflecting the lovely blue skies.